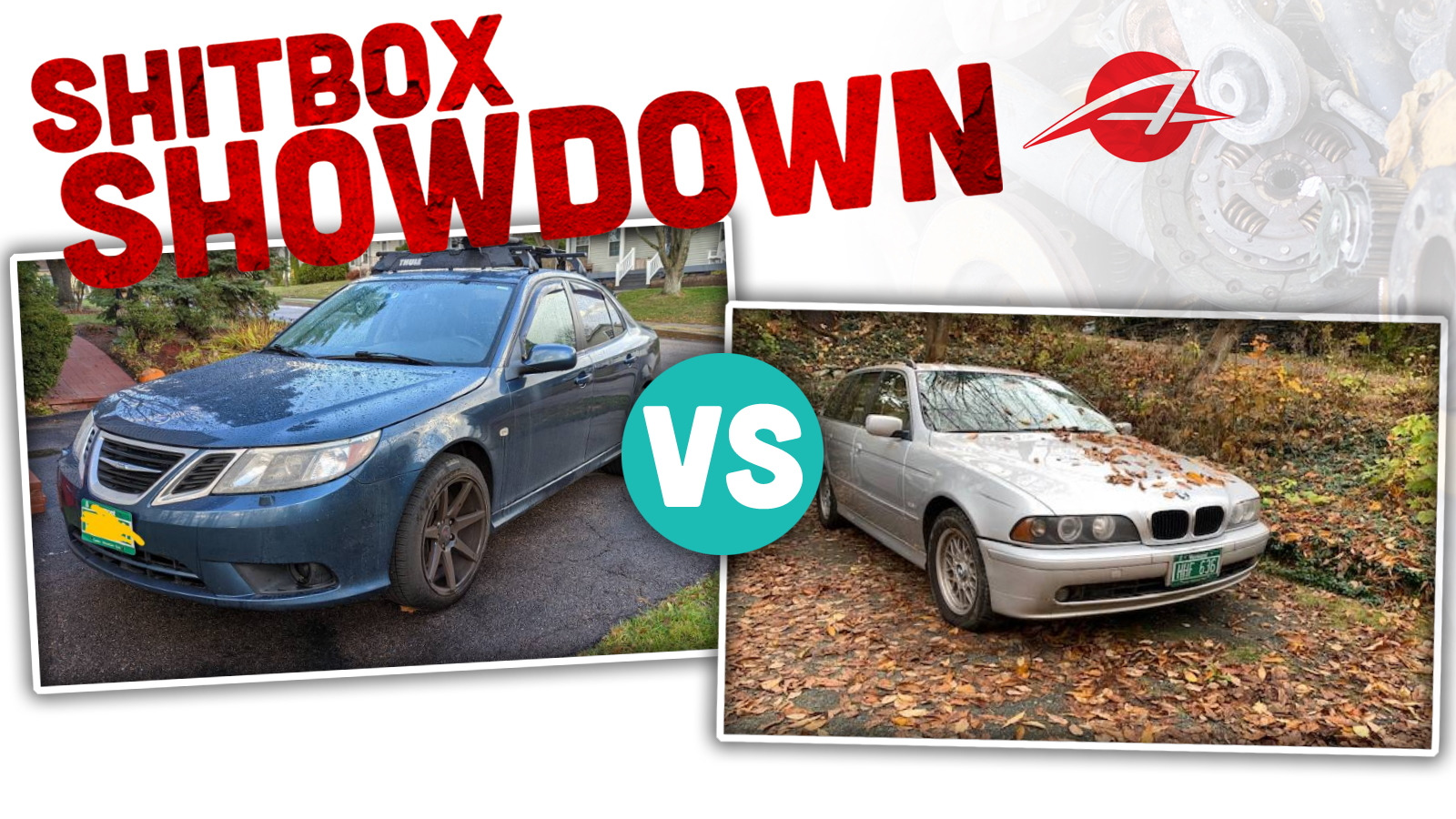 Welcome back to Shitbox Showdown, where we contemplate vehicles that might result in serious financial harm. By the time you read this, the world outside my window will, at the very least, start to be blanketed in several inches of fluffy white bullshit. Not exactly ideal, but I’ll still take it over living in Vancouver. Anyway, it’s time to gear up for snow and not say ‘shenanigans’ as we go window shopping for questionable used cars in America’s snowiest state – Vermont. But first, let’s take a look at how our dueling fun economy cars got on. 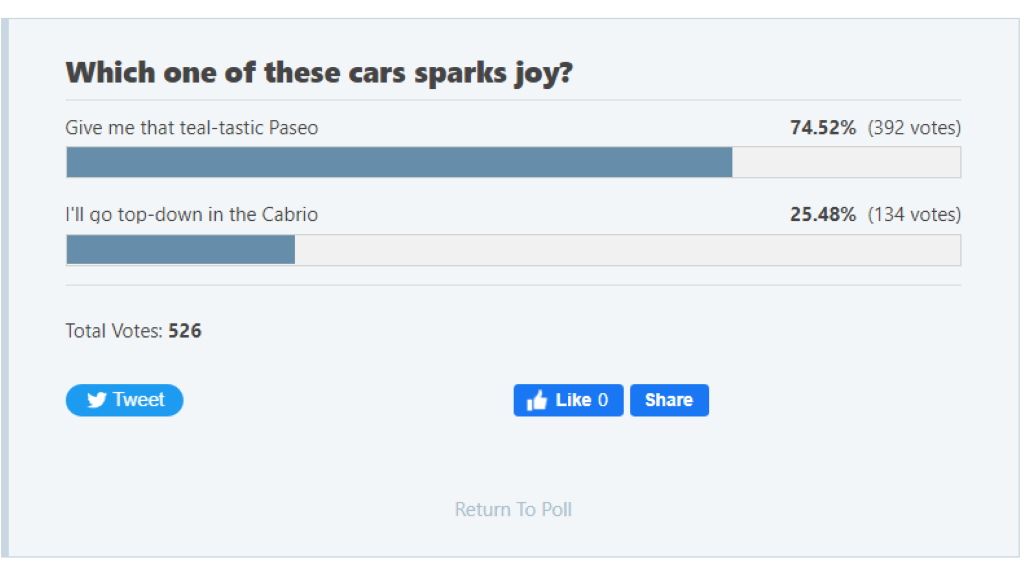 Ah, that’s not gone well for the Volkswagen. I’ll admit, I could totally see myself in the Cabrio, top-down, bouncing along my merry little way. However, old Toyotas rarely seem to die from anything that isn’t related to rust or suddenly arriving at a standstill, so the Paseo is likely the better daily driver. Anyway, enough with the reasonable cars, let’s get a bit more daring. 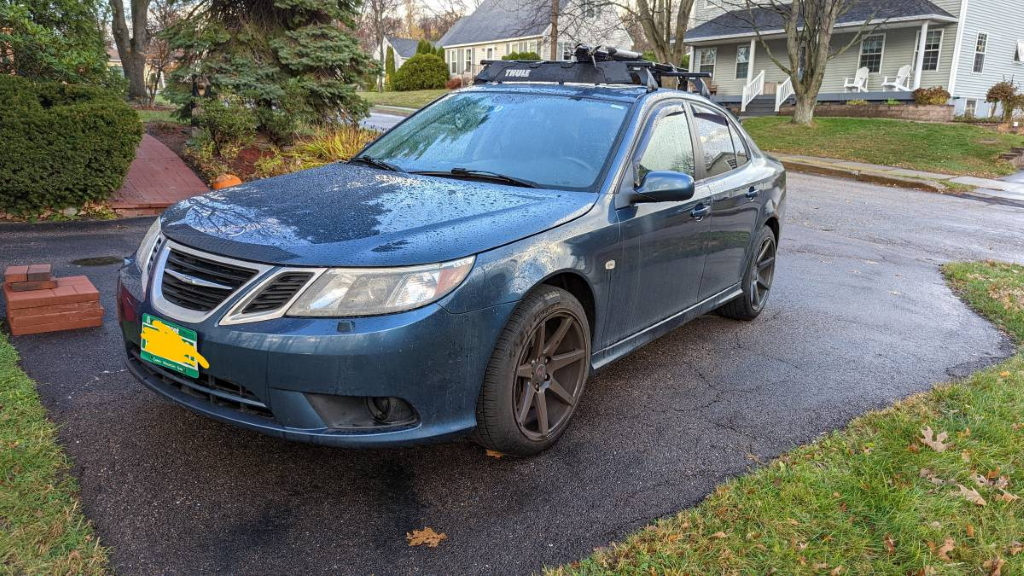 Runs/drives? Indeed it does.

Vampire Weekend torched a couple of Saabs in the visualizer video for Diane Young, and you might want to do the same to this one if you have to figure out how to source certain replacement parts for this very rare late-model wonder. Still, it might be worth persevering because this is one cool Scandinavian sled. Welcome to the Saab 9-3 2.0T XWD, a quirky Swedish sports sedan with a very unique way of sending power to its rear wheels. 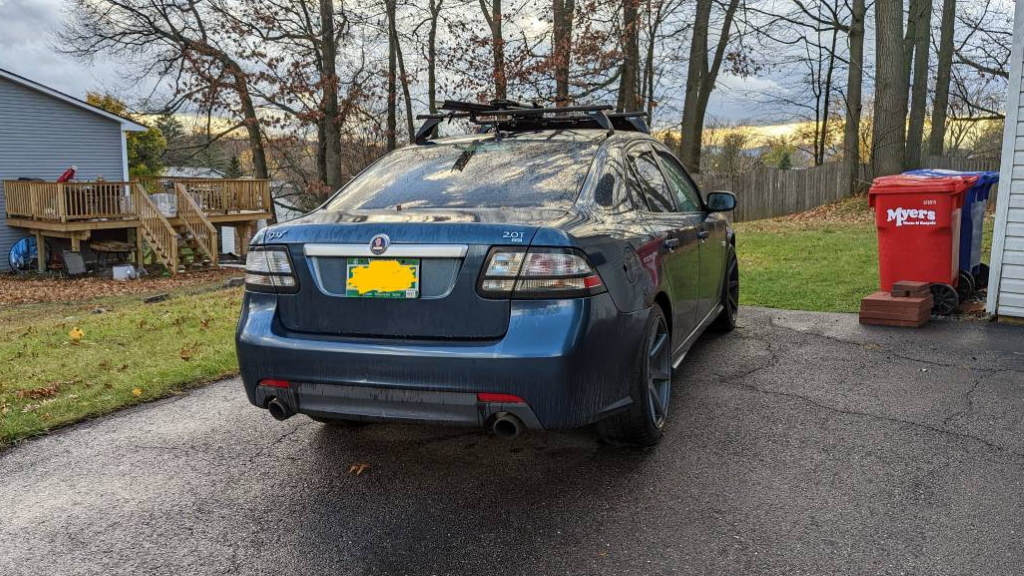 Due to friendly relations, Saab got first dibs on Haldex’s Generation IV all-wheel-drive system. However, unlike most Haldex systems, Saab’s XWD could theoretically send 100 percent of the engine’s torque to the rear wheels. It’s a nifty feather in this 9-3’s cap, although this version of XWD doesn’t take the crown due to not having the awesome electronically-controlled rear limited-slip differential found in V6 cars. As for other oily bits, a two-liter turbocharged version of the GM Ecotec four-cylinder engine known as the B207 sends 210 horsepower and 219 lb.-ft. of torque through a six-speed automatic gearbox. Not the most gripping powertrain in the world, but certainly far from the most boring one either. 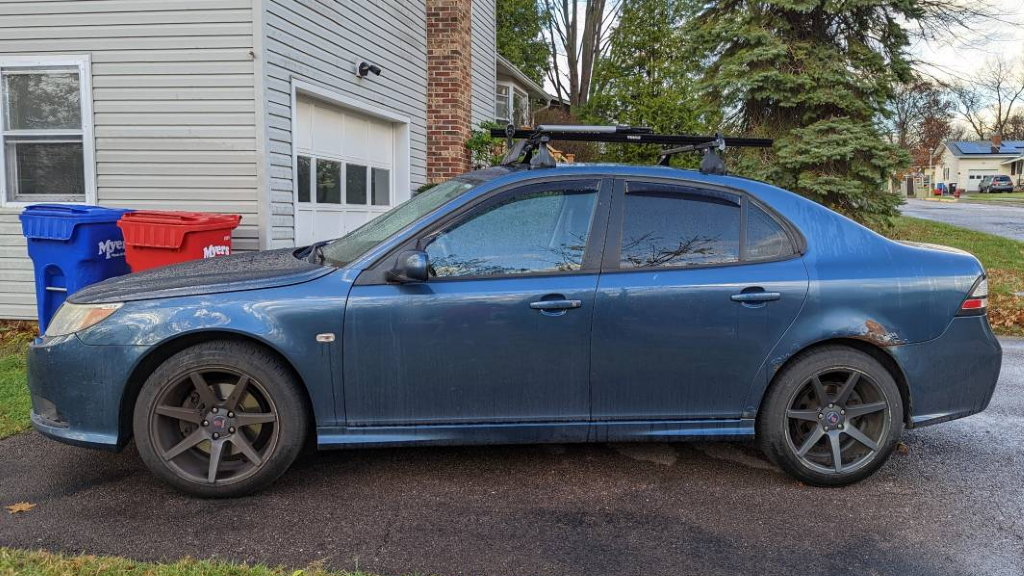 On the outside, the facelifted second-generation 9-3 is as cool and refined as a zinc bar top. Well, it normally does, this one’s looking like it’s been picking its own scabs. The quarter panels are what Jif would call extra crunchy and the front subframe isn’t entirely there anymore. Make no mistake, this thing will need a lot of work to make whole again, as is often the case for cars from New England. However, used front subframes don’t appear to be hideously expensive, so it likely won’t take a ton of money to get this thing on the road again if you’re handy with a wrench. 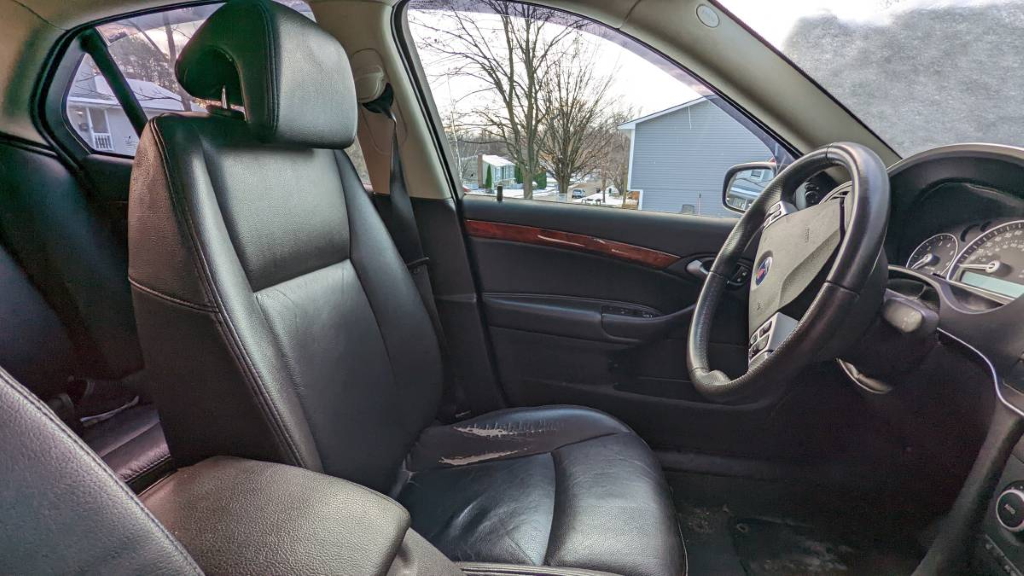 Moving to the inside, there are a few tears in the driver’s seat, but otherwise it’s all business. You can flip most of the instrument lights off with a button marked ‘NIGHTPANEL’ and pretend you’re soaring through the clouds, looking for a place to land. Plus, this generation of 9-3 has one of the most incredible cupholders known to humankind, a dramatic butterfly knife of a beverage receptacle that’s slightly rubbish at holding smaller drinks but brilliant theater. Exceedingly odd, but righteously Saab in a lovable way. 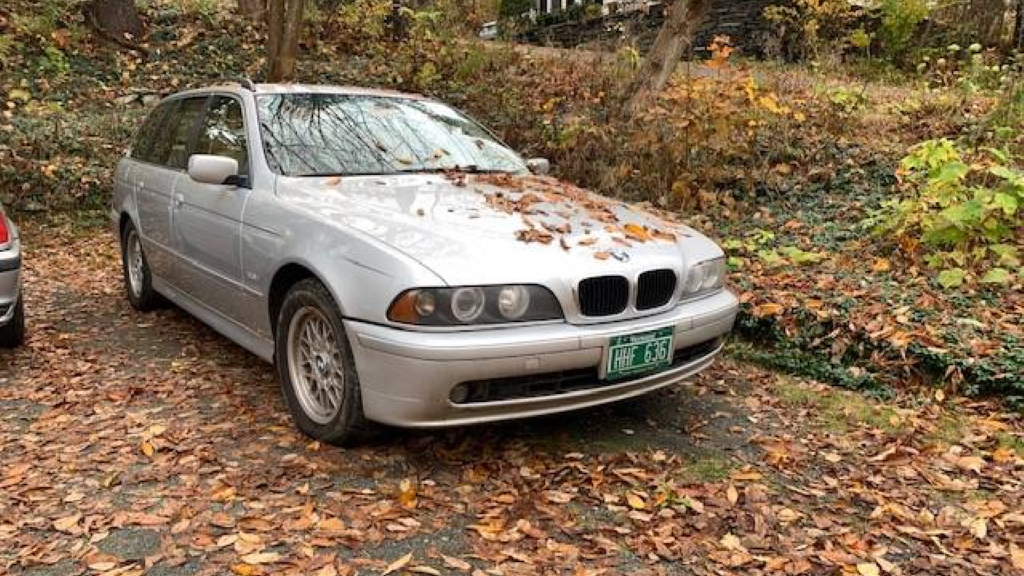 Given the state of that Saab, a suitable challenger needs to strike proper fear into the hearts of car enthusiasts. How about an old BMW featuring significant use of the handyman’s secret weapon? The venerable E39 Touring is a car found in our staff fleet, although I presume Mercedes’ example is in slightly better shape than this one. Still, if you want a big, comfortable, reasonably fun wagon, an E39 Touring is hard to beat. 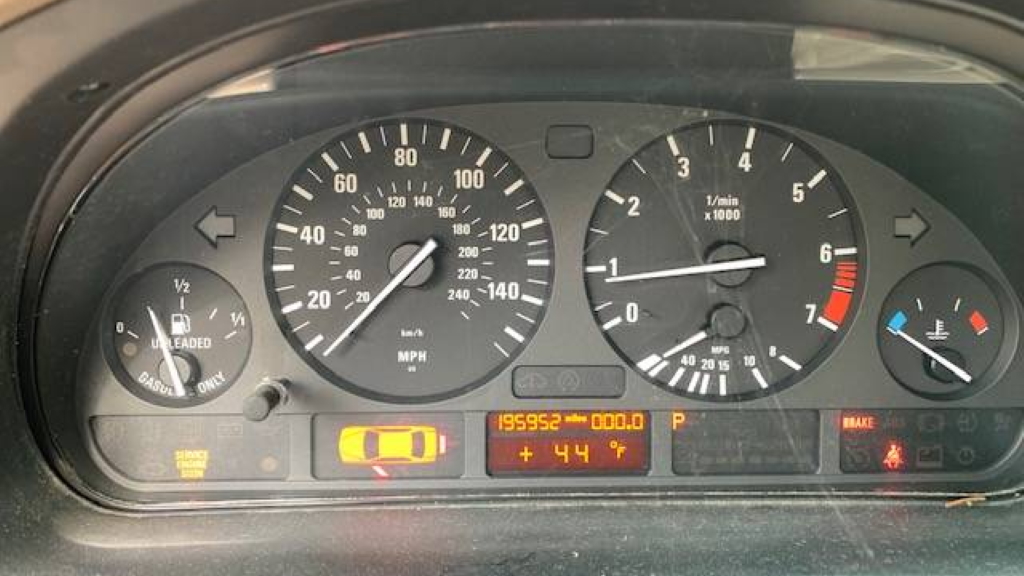 This particular example is a 525iT, which means that it packs BMW’s M54B25 2.5-liter inline-six. It’s not exactly the most powerful engine in the E39 stable, but this 192-horsepower, 181 lb.-ft. aluminum brick of creamy smoothness will certainly get you where you need to go. This one’s got a check engine light attached to it, but that’s almost the nature of old European cars. Power goes through a five-speed automatic gearbox to the rear wheels only, so winter powerslides are virtually assured. This 525iT even comes with a Bentley manual, which means that someone absolutely adored it. 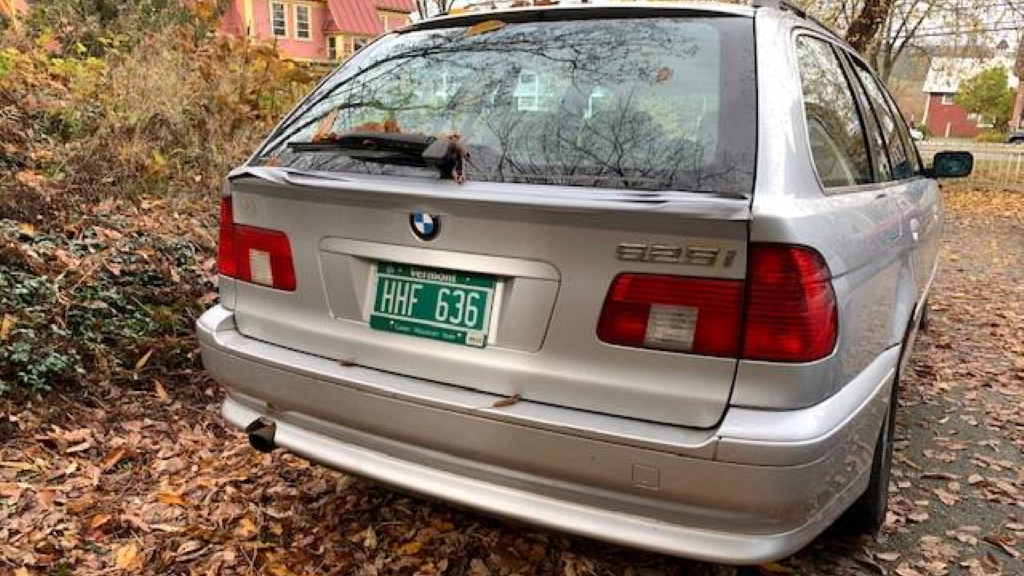 Unfortunately, that person didn’t quite adore it enough to tackle the typical tailgate rot in a proper manner. Instead of fixing things the right way, someone’s plastered duct tape all across the are underneath the rear window. Lord knows how much of a water trap that’s been. Still, the silver paint shines like a torch and the basketweave alloy wheels are still absolutely lovely. Oh, and this particular wagon is a very rare slicktop, which means that sunroof leaks simply can’t exist. 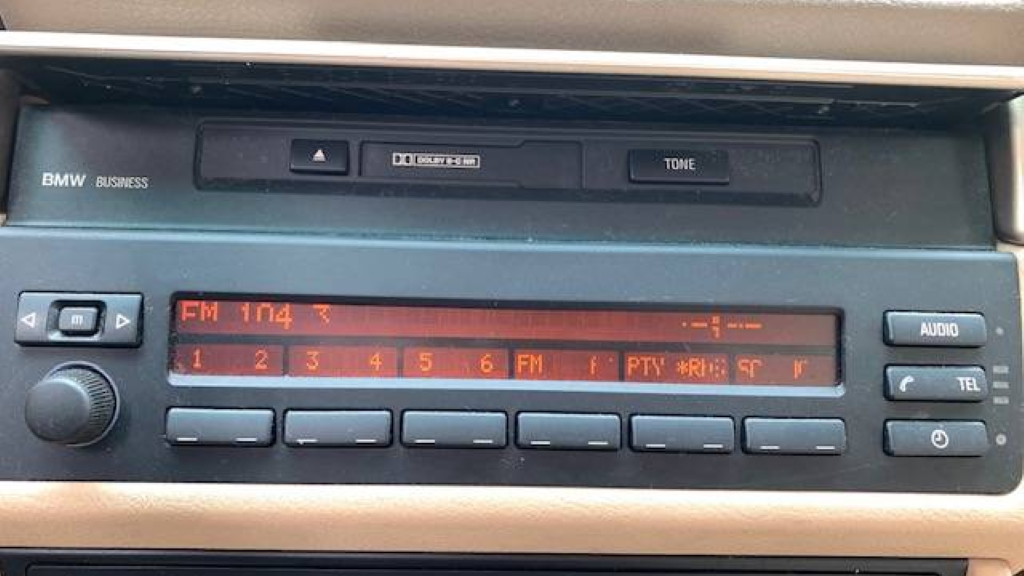 On the inside, there’s the delightful surprise of beige leather upholstery that makes the cabin feel a damn sight airier than corporate black. While no view of the driver’s outer bolster is included in the ad, the leather we can see looks nearly showroom fresh. It’s the hide of a beast, keep it maintained and it’ll last. In the dashboard sits BMW’s Business cassette player, a head unit with an amusingly dry name. Imagine someone telling you that they listen to business, it’d make your eyeballs roll back so far into your head that your optic nerves would detach.

So there we are, two extremely New England cars for your consideration. One’s very rare but looks like it’s contracted a flesh-eating disease, the other is extremely practical but also a BMW with nearly 200,000 miles on the clock. As ever, choose wisely.

Everybody Have Fun Tonight: 2022 Volkswagen Cabrio vs 1992 Toyota Paseo

I Bought This Stately BMW E39 5-Series From Our Secret Designer For $1,500 And It’s A Heck Of A Deal

Thomas is a Nu Rave-blaring, heel-toe downshifting, maple syrup-swilling, chassis-geeking, junkyard parts-hauling, floppy-haired scenester who's been writing about cars since college. His current ride is a 2006 BMW 325i with the six-speed manual gearbox. Instagram: @thomas.hundal Twitter: @thomashundal
Read All My Posts »
PrevPreviousMore Than Beginners Luck, And An Incredible Mazda Rotary Song: COTD
NextLook At Leeza: Cold StartNext