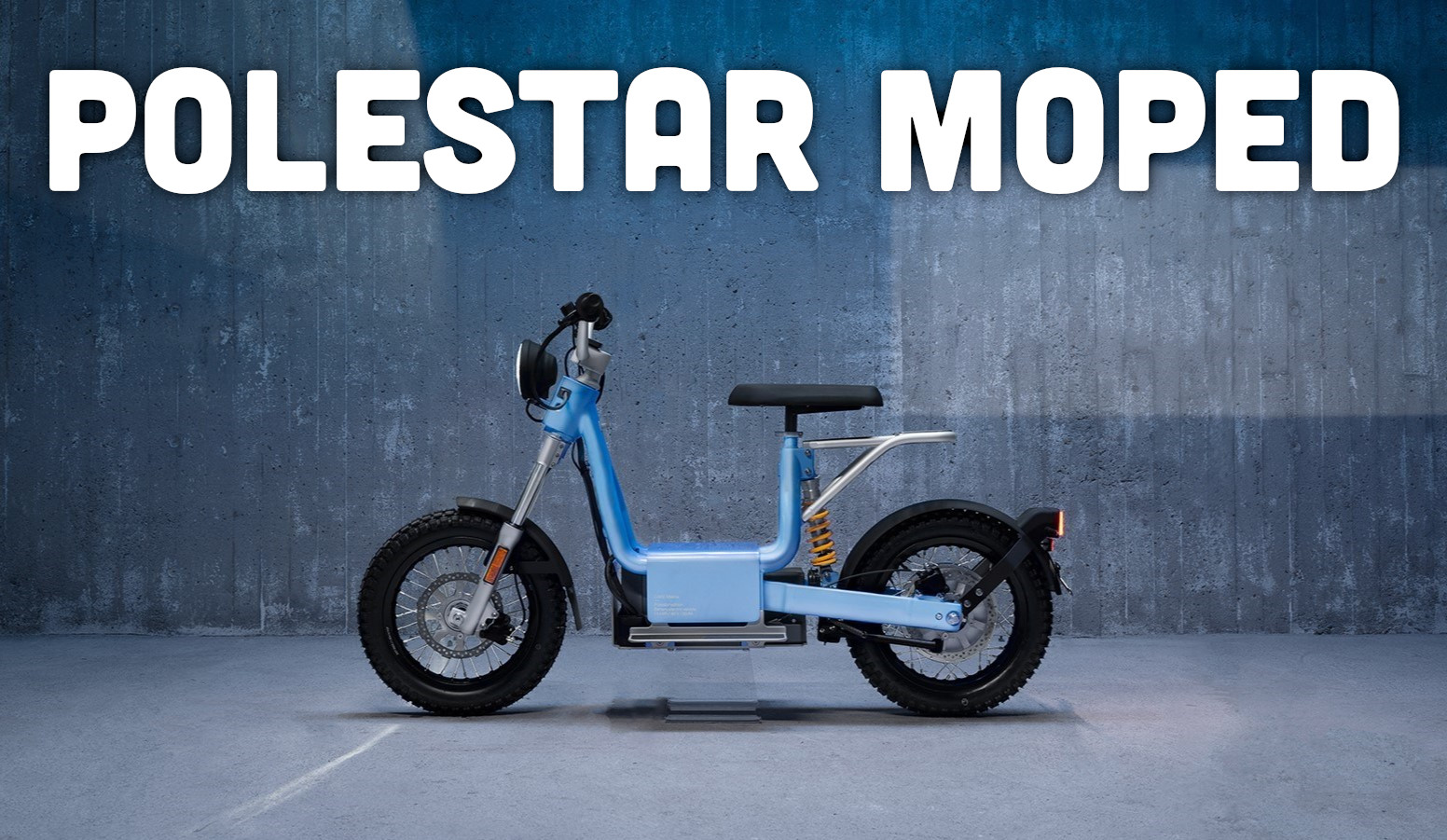 Electric motorcycle brand Cake and Volvo’s Polestar have been working on the perfect urban two-vehicle solution. The two Swedish companies have a neat idea for urban dwellers’ transportation woes by pairing Polestar EVs with electric mopeds. The companies have announced their latest collaboration, and it’s on a little utility moped that can haul a bunch of stuff like it’s a little two-wheeled pickup truck. You can buy it in America too, complete with the fantastic colors of the Polestar 6.

We’ve been featuring a lot of electric motorcycles lately. A number of them have been motorcycles that you’ll hopefully be able to buy in the future. Others are motorcycles that you probably won’t be able to buy but are still pretty amazing. Today, we have something a little different. Back in 2020, electric motorcycle brand Cake joined forces with Polestar on electric mobility solutions. A year later, the pair announced that they were creating what they call the first-ever “electric mobility bundle.” This bundle combined a Polestar 2 with a Cake Makka moped. And the concept was more than just a moped hanging off of the back of a Polestar, as it used a cable to connect and charge the Makka using the car.

Automakers are willing to sell you little kickscooters to beat around your city with, but this goes an extra step further, giving you a deployable moped charged by your car. Though, it doesn’t have the polish that Honda had back in the 1980s with its Honda City and Motocompo moped. At the same time that Polestar and Cake announced the concept, it also launched a Cake Makka Polestar edition, which was painted in Polestar’s Snow white with Polestar graphics on it (above). That little moped–which wasn’t available in the United States–apparently sold out instantly.

Now, the pair are releasing another Makka Polestar edition, and this time Americans can buy one.

For those not familiar with what a Cake is, I’ll give you a rundown. The company was founded in Stockholm, Sweden in 2016. Founded by Stefan Ytterborn, Cake’s goal is to drive towards a zero-emissions future while keeping things fun. Cake’s site says that the design team’s mantra is “light, quiet and clean,” and you can see it in the motorcycles and mopeds created by the company. The company’s first motorcycle made its debut in 2018.

The Kalk is an electric off-road motorcycle with a minimalist design, lightweight, and a torquey motor. It was followed up in 2019 with the Ösa, a utility motorcycle that looks like a small girder with wheels. The idea behind that one is to allow its rider to carry their gear by simply attaching it to the motorcycle. And when the motorcycle gets to its destination, its battery could be used as a power station.

This $5,680 version still goes 28 mph, but you get more of everything else. The battery doubles to 3kWh, bumping the range up to 62 miles. Power is 4.4 HP peak (2.07 HP nominal) and you get thick racks front and rear to carry whatever you can fit on them.

Or for $5,300 you can get the Makka Polestar edition. This one is the same moped as the $4,470 Makka Flex, but you get your moped in the same lovely blue color as the Polestar 6. I smashed two press images together for a rough look at the two of them together:

And in Polestar fashion, you get Polestar script on the side. You’re getting the same 1.5kWh battery and the same up to 3.75 HP motor, but you do get a rear rack standard. Granted, that rack isn’t exclusive to the Polestar edition, as you can buy it for $98 for a regular Makka.

But that’s actually really neat. Cake will sell you all kinds of utility racks so that you could carry packages with your Makka. Heck, you can even get a surfboard carrier and hooks to hang stuff! So if you really wanted, you could use a Makka Polestar edition like a little two-wheeled pickup. It reminds me of the Honda CT50 Motra, but for the modern day.

I will admit that the price of $5,300 is on the steep end for something that can go only 28 mph. I’ve written about faster electric motorcycles with a similar price. Cake is positioning itself more towards the luxury end of the moped spectrum, which makes sense. These are pretty smart, too, featuring regenerative braking, removable batteries, and drive modes. This is a pretty moped that Cake wants you to pair with a pretty Polestar.

And unlike some of those cheaper electric motorcycles I’ve written about, these are super customizable right out of the box.

If you’re a Polestar fan and want a matching moped, the Cake Makka Polestar edition is available starting today and you can get in line on Cake’s website. If you’re interested in the Makka but don’t need the Polestar colors, you can get one from Cake’s website, too, but be prepared to wait 10-12 weeks. This is another one that I’d love to ride for myself. If you live in a city, this could be a cool little tool to get around on.

• A Startup Is Launching A Practical Electric Motorcycle That Costs Just $1,500

Mercedes is a lifelong fan of all things powered by an engine. When she isn't driving one of her five Smart Fortwos or her 14 other vehicles she could be found in the cockpit of a Cessna 172 or perhaps swimming in any body of water that she could find. She also has a deep love for buses of all kinds. Please send her buses. mercedes@theautopian.com Instagram: @mistymotors Twitter: @Miss_Mercedes30 Facebook.com/neonspinnazz
Read All My Posts »
PrevPreviousWhat It Was Like Owning And Fixing My First Jeep After Owning Over 100 Non-Jeeps
NextMore Than Beginners Luck, And An Incredible Mazda Rotary Song: COTDNext