Parts Bin Puzzle: Who Made The Lights On This 17-Year-Old Luxury RV? 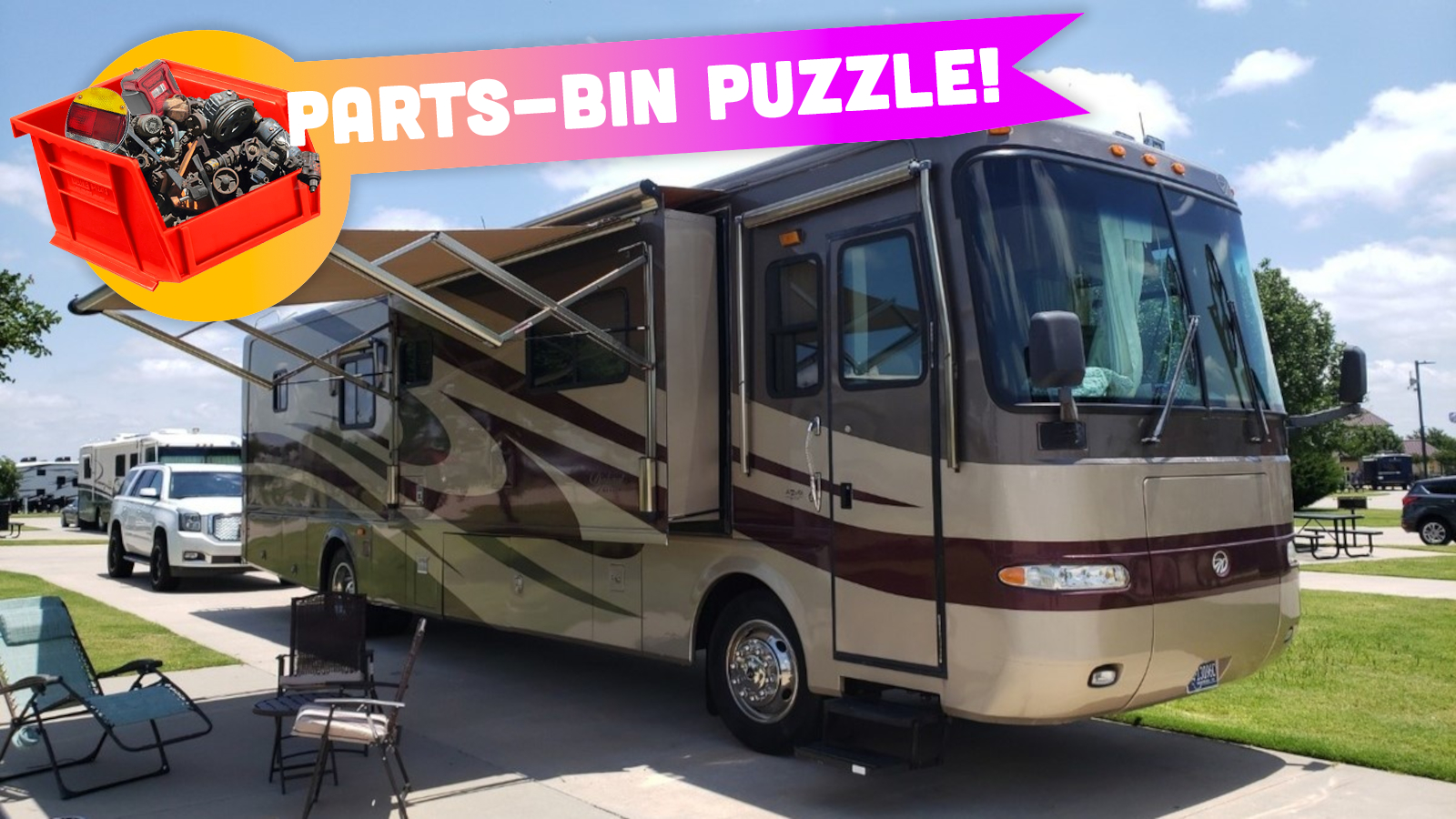 Welcome back to Parts Bin Puzzle, the Autopian challenge where we give you a vehicle and you figure out where its bits came from! This time, we’re returning to RVs to find out where headlights and taillights came from. This is a Monaco Diplomat. Built in 2005, this luxurious Class A RV sat near the bottom of Monaco Coach Corporation’s lineup. And like many motorhomes, Monaco looked to the parts bins of other manufacturers for its motorhomes.

Last week, we looked at the 2010 Heynsdyk 2500 SF. It was a rare Dutch kit car built out of then 20-plus-year-old donor cars. We asked you to guess its headlights, taillights, and donor car. Those of you who guessed Porsche 944 for the donor car are correct! The headlights came from a first-generation Mini Hatch and the tails from an Alfa Romeo 159.

Today’s Parts Bin Puzzle takes us back to the familiar warmth of the recreational vehicle. This one comes from the mid-2000s, before a number of RV manufacturers figured out more bespoke lighting arrangements. But what that means is that we get to have some fun!

Monaco Coach Corporation opened in 1968 as the Caribou Manufacturing Company in Junction City, Oregon. The company’s founder, Ray Mehaffey, wanted to offer his customers their dream campers. Caribou started off by building truck campers before introducing the Monaco line of small Class C RVs in 1971. Before long, the Monaco mini-motorhomes became notable as Caribou’s most popular line. And in 1977, the company changed its name to the Monaco Coach Corporation.

What happened after was a bunch of acquisitions, as detailed by the Oregon Historical Society:

Over the years, Monaco expanded and reinvented itself several times. In 1984, the company purchased Chrysler Corporation’s Roadmaster Chassis Division. Obie sold Monaco to Warrick Industries in 1987. Led by its president, Kay Toolson, the Monaco Coach Corporation added three manufacturing facilities in Indiana and, in 1993, became a publicly traded company. Monaco acquired Harley-Davidson’s Holiday Rambler Division in 1996 and Safari Motor Coach in 2001 and operated factories in Bend and near Burns.

Perhaps the most surprising bit of history there is that Harley-Davidson once owned an RV manufacturer. That came during a time when the Motor Company had a portfolio of more than just motorcycles. It also owned Utilimaster, a commercial vehicle outfit, and B&B Molders, an injection-molded plastics company.

From there, Monaco continued to grow. And that brings us to the RV right there on your screen.

It may be 17 years old, but it’s still lavishly appointed. The people up front get to enjoy thick leather bucket seats, with front passengers getting their own huge leather couch. Equipment includes everything from an onboard water purifier to four slides and cherry wood cabinetry. An 8kW generator provides off-grid power and you even get a nice air bag suspension.

Power comes from an 8.9-liter Cummins ISL 350 turbodiesel six. As the name suggests, the rear-mounted engine produces 350 horses to get the rolling manor down the highway. This engine is actually about half of the weight of the Cummins from the first RV Parts Bin Puzzle. At just 1,556 pounds, even my Smarts could haul it. Of course, I have you all here not just to nerd out about RVs, but to have you guess some lighting!

Here’s what you get up front.

And here’s what’s out back.

Unfortunately, Monaco is an RV brand that did not make it to the present day. Sales fell during the Great Recession and, in 2009, it filed for Chapter 11 bankruptcy. Navistar International picked up the scraps and kept things going until 2013, when Navistar’s own troubles led to the RV manufacturer getting passed to REV Group. Today, Monaco RVs are no longer made, but REV Group still provides service.

So, Autopians, where did Monaco get these lights? After you take your guesses, click here to reveal the parts bins that these lights came from.

Mercedes is a lifelong fan of all things powered by an engine. When she isn't driving one of her five Smart Fortwos or her 14 other vehicles she could be found in the cockpit of a Cessna 172 or perhaps swimming in any body of water that she could find. She also has a deep love for buses of all kinds. Please send her buses. mercedes@theautopian.com Instagram: @mistymotors Twitter: @Miss_Mercedes30 Facebook.com/neonspinnazz
Read All My Posts »
PrevPreviousUsed Car Wholesale Values Are Finally Starting To Fall, But Don’t Get Too Excited
NextThis Australian Kid Put A Turbo On A Dirtbike In The Jankiest Way PossibleNext