Welcome to “Oz Oddities,” my new regular feature wherein I write super-short articles about strange car culture in Australia, since I don’t have time to write long-form stuff seeing as I should be fixing a 1969 Chrysler Valiant Ute. Today’s nugget comes from a car show I attended last week at a local pub: A youngster was showing off his dirtbike outfitted with a sketchy turbocharger setup. Let’s have a look.

Oh boy, it’s late here, and I just spent far too many hours grinding, welding, removing leaf spring bolts, trying to adjust a door — I also sneezed black into a napkin, plus my hair has metal in it. Anyway, I’ll explain it all later, but suffice it to say that the former kangaroo-hunting Chrysler Valiant ute that I bought sight-unseen, and that I flew to Australia to drive, is toast. The likelihood of it ever moving under its own power again is pretty much zero because, as my host Laurence has put it, “This paddock-basher is absolutely cactus.” That means broken, by the way. I’d really love to tell you more, but I’m just so tired every night after wrenching, so it’ll have to wait. What won’t have to wait are “Oz Oddities,” little before-bed mini-blogs about Australian car culture. I can’t wait to tell you about “shed skids,” why car nuts here often visit “Mexico,” and why the AU Falcon  is the most redneck car in the whole of Australia.

Today, though, I’m showing a turbocharged 125cc dirt bike owned by a young man/teeenager who attended a little car show at a pub near Dubbo, where I’m staying. 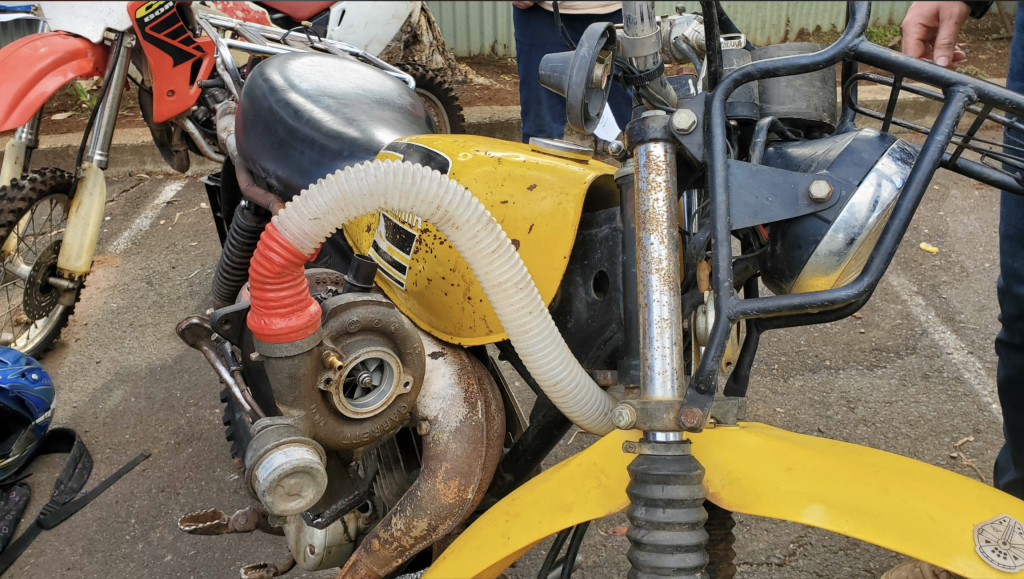 Much respect to this young man for spending time wrenching on a machine when the internet temps with Tiktok videos; this is the back-country janks that I love to see. The Garret turbo, which looks like one I snagged off an old Saab, has been bolted to a bit of hollow square tubing, which is welded to round tubing, which is welded to the bike’s exhaust pipe feeding out the front of the single-cylinder engine. 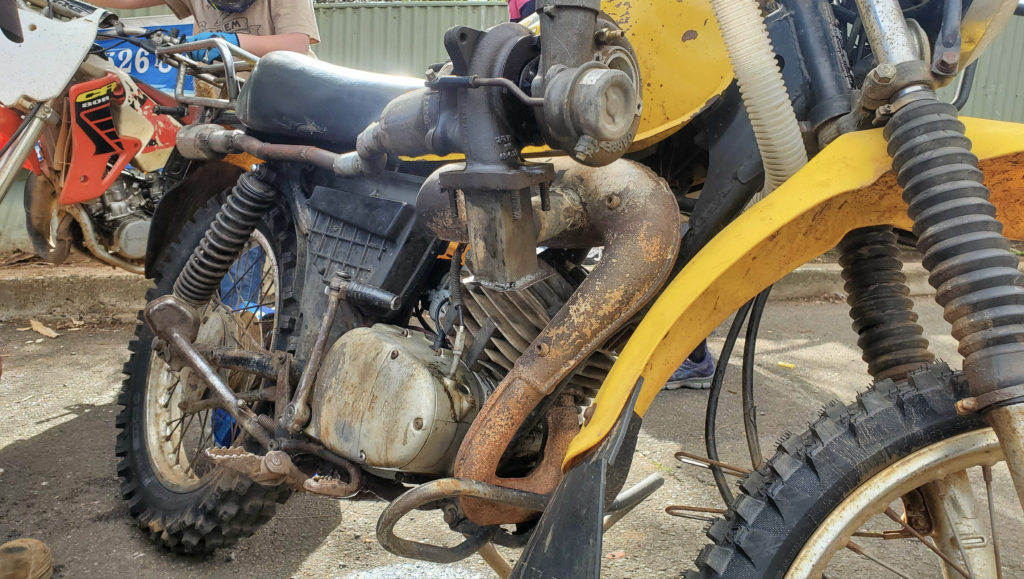 Hold on, upon second glance, it appears that the square tubing isn’t bolted to the turbo, since the turbo’s studs go nowhere — I guess this kid welded the tube to the turbo’s housing? How’d he get the weld to penetrate that cast iron? Anyway, you can see that the other end of the tubing has been blocked off with a thin piece of sheetmetal, where you can see that this kid — despite the shape of his bike — ain’t a bad welder at all! He’s definitely better than I. 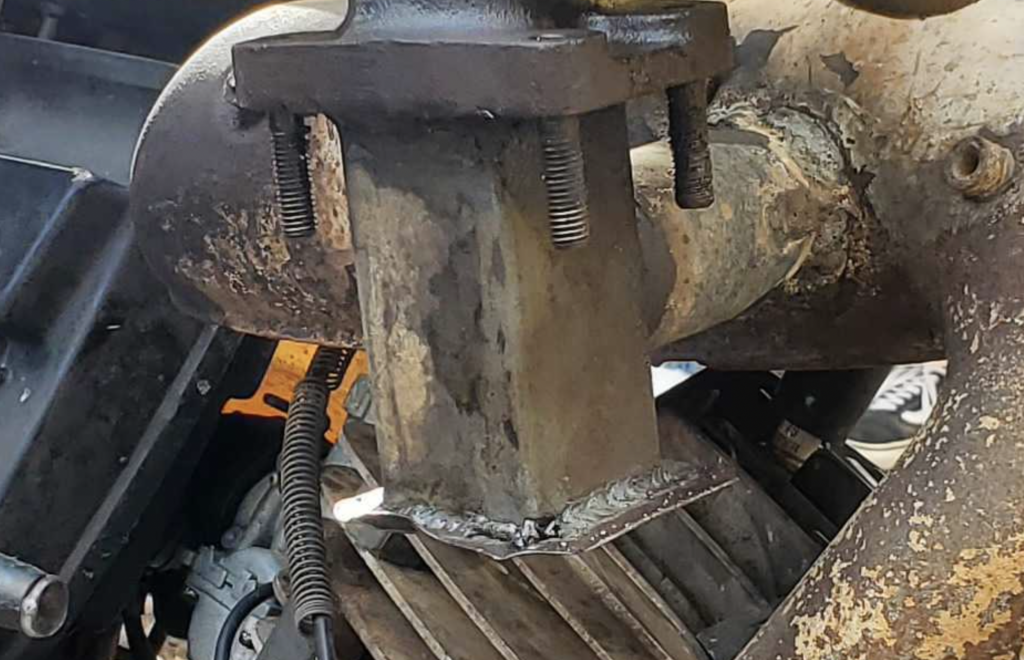 The exhaust spins a turbine on the back side of the turbo, which spins a shaft connected the compressor at the front of the turbo. Unfiltered air gets sucked into that hole, the compressor squeezes it, and shoves it through what looks like a tube from a vacuum cleaner, presumably into the bike’s carburetor. 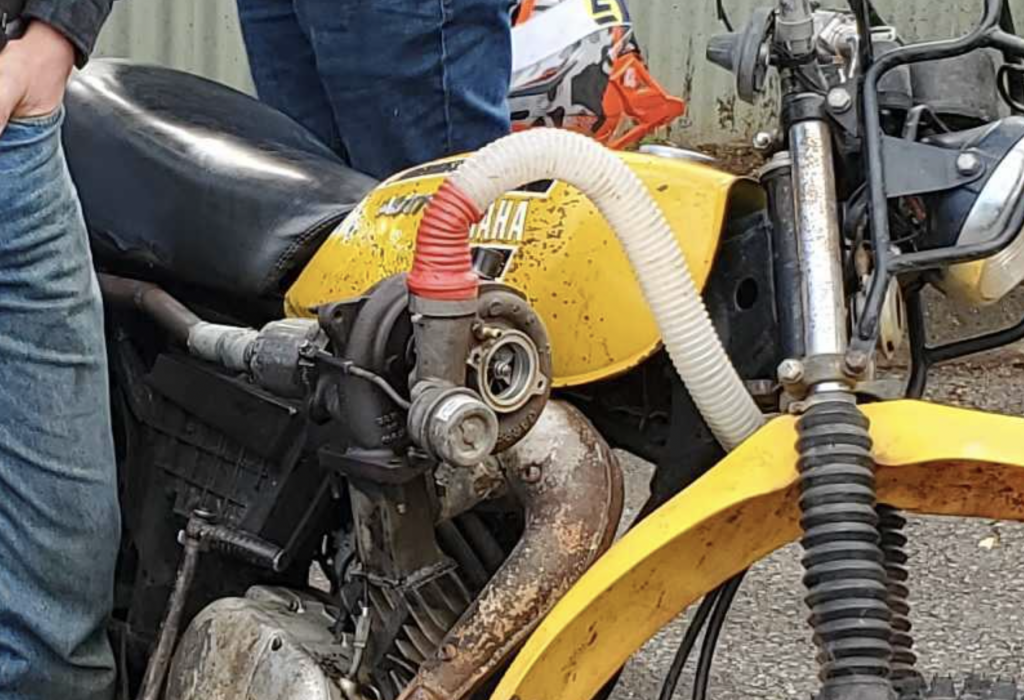 I pointed out the threaded hole that normally receives oil flow to lubricate the turbo’s bearings, and asked if he was worried about bearing failure, shaft wobble, and then ultimately catastrophic failure. “Oh, I just keep a can of WD-40 on my handlebars, and regularly spray into that hole while I’m riding.,” he replied, also noting that the handlebars sometimes also carry “long-neck” beer bottles while he’s riding, presumably on back-country property. 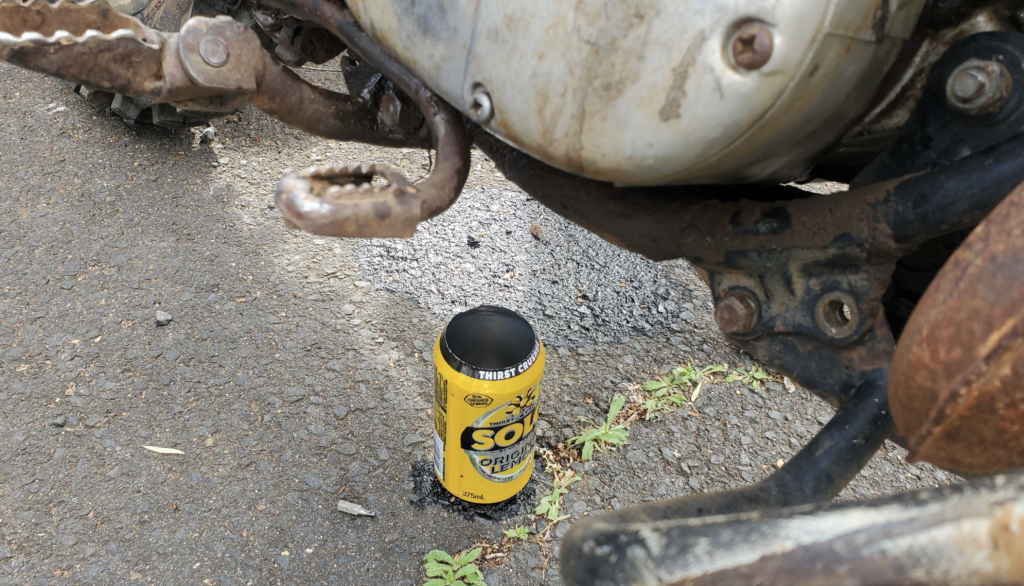 Anyway, I figured I’d show you this because the leaky, jankily-turbocharged motorcycle is both terrifying and also fascinating in a Mad-Max-ish short of way, and I somehow decided it was the coolest vehicle at the show. And that’s saying something, given that it was full of amazing Fords, Holdens, and especially one awesome Jeep CJ-5 unlike any I’d ever seen. It’s poorly engineered and in many ways completely pointless (I doubt that little engine spinning up that big, WD-40-lubricated turbo is improving engine performance), but it’s honest. It is a motorcycle owned by a teenager who felt like installing a turbo. Nothing more, nothing less.

Hell, look at that oil catch can underneath, and the bolt missing from the engine-protection bar.  They just push this bike further and further into the realm of jankiness to the point that it has become art.

Rust-loving Jeep man, cofounder and EIC of The Autopian, Jason's friend. Email: david@autopian.com
Read All My Posts »
PrevPreviousParts Bin Puzzle: Who Made The Lights On This 17-Year-Old Luxury RV?
NextThe Legendary ‘Boaterhome’ Is A Chimera Of Van, Boat, And Concentrated AwesomeNext