The Legendary ‘Boaterhome’ Is A Chimera Of Van, Boat, And Concentrated Awesome 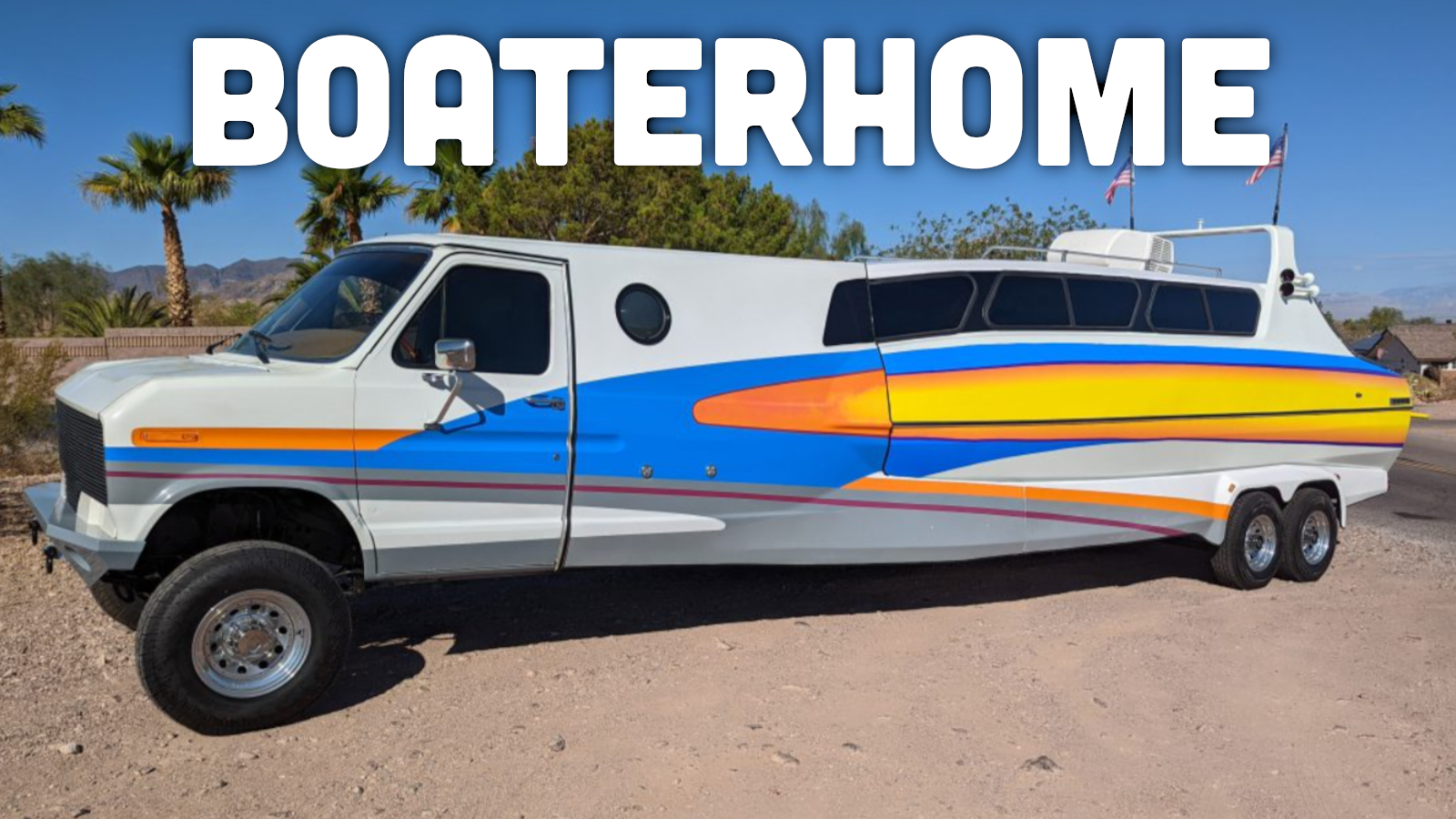 In July, Barrett-Jackson sold one of the most incredible vehicles that you’ll see on the net. That’s right, someone paid a reportedly record-breaking $77,000 for a wonderful creation called the Boaterhome. This majestic vehicle is a 1987 Ford Econoline E-350 with a 1986 Sport King Cabin Cruiser almost seamlessly connected to its back. It’s a boat, it’s a van, and it’s an RV all-in-one.

If you’ve been on the internet for a while, chances are you’ve seen the Boaterhome before. It’s been featured on a Little Caesars Pizza commercial, Ridiculous Rides, and Street Muscle Magazine. You’ve probably seen it on Facebook, Reddit, or anywhere else car pictures end up. I remember first seeing it on Opposite-Lock years ago. Thankfully, the creation is still around, and apparently it’s better than ever after a restoration and overhaul. It sold at a Barrett-Jackson auction in Las Vegas last month for $77,000, a figure that the auction says is a new record for RVs.

Watch this video, I promise you won’t regret it:

You’ll find a lot of Boaterhome articles and videos out there dating back over a decade, if not longer. But many of them leave so many questions unanswered. It’s believed that the Boaterhome was first created in the mid-1980s, but not much is said about how it came to be. Amazingly, this isn’t a one-off custom creation, but something built by a company.

The Boaterhome was originally the work of Sport King, a now defunct recreational trailer manufacturer. History on Sport King and its King Manufacturing Inc. is thin. According to NADA Guides, Sport King was founded in 1945 by Walter King in Torrance, California. At the time, King originally planned to build just one camper for his truck, but decided to make a business out of it. NADA credits King for popularizing the truck camper and notes that the company went on to make travel trailers, fifth wheels, and Class C RVs.

In 1986, Sport King got the idea to make a camper for land and water. The idea itself isn’t all that wild; we’ve seen this concept before with the Ship-A-Shore Combo Cruiser and other boat-camper combos. But Sport King took it to the next level:

The Sport King Boaterhome starts with a Ford Econoline E-350. At the time, Ford’s long-running work van was in its third generation. This generation of Econoline, running from 1975 to 1991, diverted from its unibody predecessor with a body-on-frame design. It was about a decade before this time that the Big Three started producing cutaway versions of their vans, allowing for a multitude of vehicle designs.

While a cutaway might make sense for an application like this, the vehicles appear to have started life as regular vans. They then got cut, stretched out, and given tag axles. All of that extra length made for an integrated boat trailer, for which a Sport King fiberglass cabin cruiser slides right onto and connects with the van.

When connected to the van, the front window of the cabin cruiser can be opened, making for a passthrough. And that cabin cruiser is well-equipped with a galley, bathroom, dining room, living room, and a deck out back. Thus, when connected to its van host, it actually makes for what seems to be a comfy RV. It even has RV-style hookups for when you roll up to the campsite.

On the water, a Mercury MerCruiser 350 making 260 HP allows the cabin cruiser to reach speeds up to 45 mph. Advertisements recommend the boat for lakes and other inland waterways. The equipment onboard also includes 55 gallons of freshwater storage in addition to 25 gallons for gray water and 25 gallons for black water. It seems like you could camp in this thing for a few days on land or on water. The boat is said to displace 6,260-pounds.

Of course, a question that I bet you have is how does it get to the lake? After all, the 28-foot boat makes the van far longer than it would normally be. And the V-hull of the cabin cruiser resides where you’d think the differential would be for those rear axles.

Sport King’s solution for this was to give the Econoline a four-wheel-drive conversion, then disable the rear output. What company the conversion came from isn’t said, but you can see the front differential in videos of the Boaterhome.

This particular Boaterhome drives just its front wheels using a Ford 460 V8 paired to a three-speed automatic. That should be making 245 HP here. According to an ad in a newspaper from 1986, a Boaterhome set buyers back $86,000, or about $229,134 today.

It’s unknown exactly how many Boaterhomes Sport King was able to fire off before the shuttered in 1987. But amazingly, the story doesn’t end there. In 1995, a Canadian company called Highwave Boatorhomes Inc. sprouted up to build vehicles following the same concept. The Boatorhome (now with an “O” instead of an “E”) followed the same idea of taking a van and connecting it to a boat.

The newer Boatorhomes still rode on Ford Econoline vans, but now featured a 31-foot cabin cruiser connected to the back. This apparently necessitated the addition of an additional tag axle, making it a front-wheel-drive beast with eight total wheels. The boat was similar inside, featuring everything you’d need to camp on water or on land. The engine in the van was the legendary 7.3-liter Power Stroke turbo diesel, which offered up 215 horses.

Highwave said that the reason it decided to go big was because the van’s capabilities were maxed out. Still, I’m a bit blown away by the concept images.

Highwave’s spec sheet describes something rather gargantuan. It’s 45-feet-long, weighs 27,000 pounds (the boat is 11,000 of that), and is powered by a Caterpillar 7.2-liter straight six turbo diesel making 250 HP. The boat got Twin Mercury MerCruiser 502 inboards producing a total of 800 horsepower.

I searched far and wide, but I couldn’t find a single one of these in existence. Further, Highwave Boatorhomes 2000 Inc. shows up in a 2007 Ontario government notice for companies in violation of the Corporations Tax Act. Ontario notes that violators must comply with the Act, or within 90 days of notice the government will dissolve the violating company. The Ontario government notes that Highwave closed in December of that same year. Thus ends the story of Boaterhome and Boatorhome production. It looks like the site continued to be up for years, even though the company itself was long gone. The domain is still in use today, but for some weird home improvement site.

Exact production numbers are unknown, but 21 Boaterhomes are believed to exist. The most famous of which is probably the one that you see before you today. This one was built by Sport King and Barrett-Jackson notes that the van and boat both underwent a restoration.

It got new paint, plumbing, new inverter, lithium batteries, and more. The creation still has its factory running gear for both van and boat, but both are reportedly refreshed. It sounds like the new owner essentially bought a brand new Boaterhome, which is awesome. Hopefully, we continue to see this wonder for years to come.

Mercedes is a lifelong fan of all things powered by an engine. When she isn't driving one of her five Smart Fortwos or her 14 other vehicles she could be found in the cockpit of a Cessna 172 or perhaps swimming in any body of water that she could find. She also has a deep love for buses of all kinds. Please send her buses. mercedes@theautopian.com Instagram: @mistymotors Twitter: @Miss_Mercedes30 Facebook.com/neonspinnazz
Read All My Posts »
PrevPreviousThis Australian Kid Put A Turbo On A Dirtbike In The Jankiest Way Possible
NextThe Volkswagen ID.XTREME Concept Is An Off-Road EV Packing 3D-Printed Flares And Special NoisesNext