Same Number Of Gears As There Are Pedals: 1974 Ford Ranchero vs 1964 International Scout

Welcome back to Shitbox Showdown! Today, we’ve got two hard-working 3 speed manual vehicles that both need a little assembly. We’ll get there in a minute; first we have to see which bad idea you preferred from yesterday…

Looks like it’s a dead man’s party up in here. I don’t know what it is about hearses, but folks who love them really love them. Someday, I need to show you all my friend Eric’s custom ’66 Cadillac hearse; it’s a sight to behold.

But for now, we have more pressing matters, in the form of two uncommon trucks (or near-trucks) that both need some work. But both of them come with extra parts to help you on your way. Let’s take a look at them. 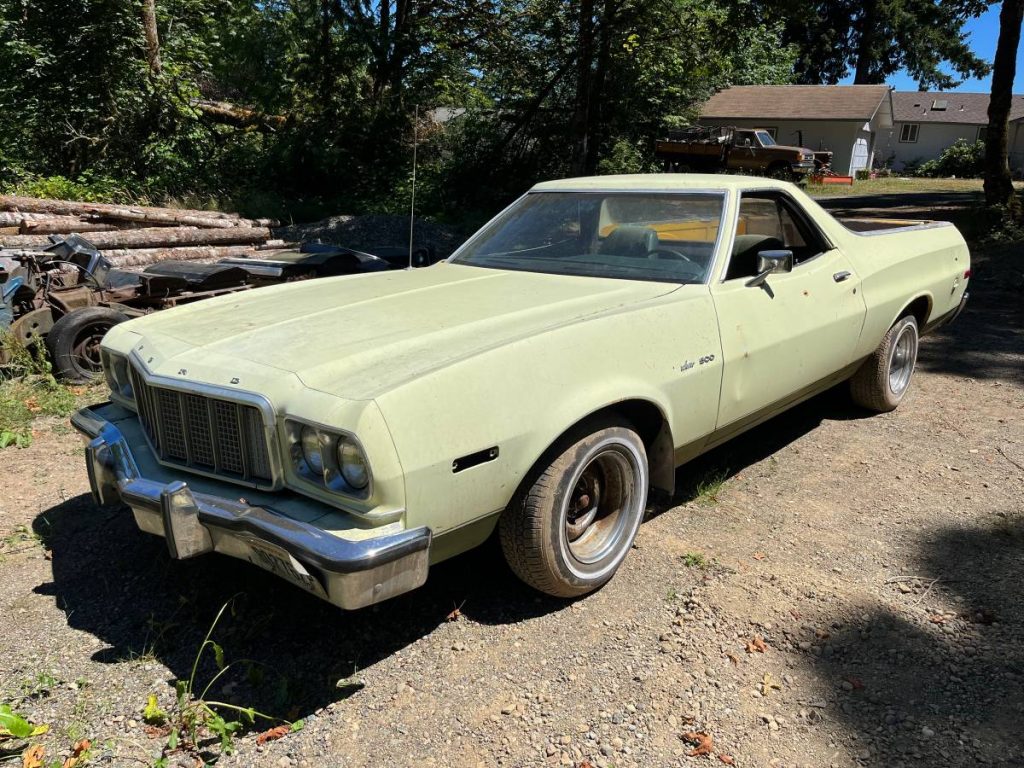 Runs/drives? Technically, but not quite roadworthy

First off, for the benefit of our younger readers: When this vehicle was built, the type of transmission it uses had another name besides a manual transmission. It was a standard transmission. Three forward speeds (“slow, fast, and haulin’ ass,” as a high-school friend of mine called them), usually on the column, and a clutch pedal were what you got if you didn’t specify what transmission you wanted, in pretty much any car short of a Lincoln or Cadillac. Most cars were sold with an automatic, but it was nearly always an optional extra. 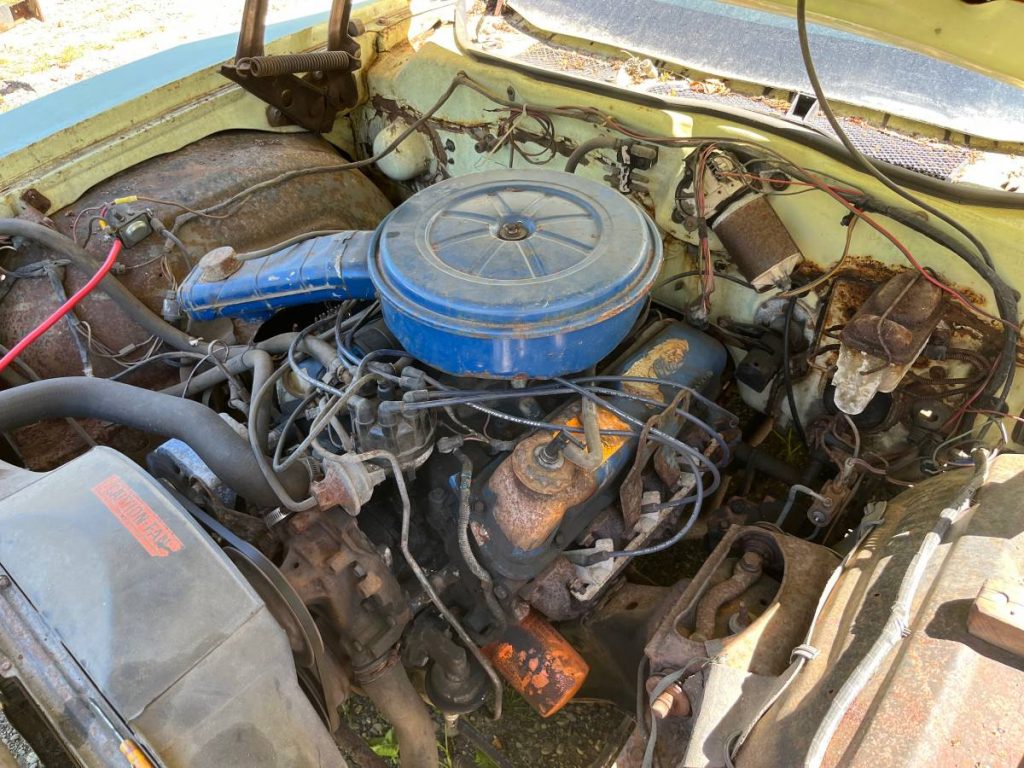 But whoever originally bought this toothpaste-green Ranchero didn’t spring for many extras at all, it seems, besides extra cylinders. That 3-speed standard is spun by our good friend the Windsor 302 V8, with a two-barrel carburetor, which the seller says runs “perfect.” It does not have power steering or power brakes, so don’t skip gym days; you’ll need your strength. 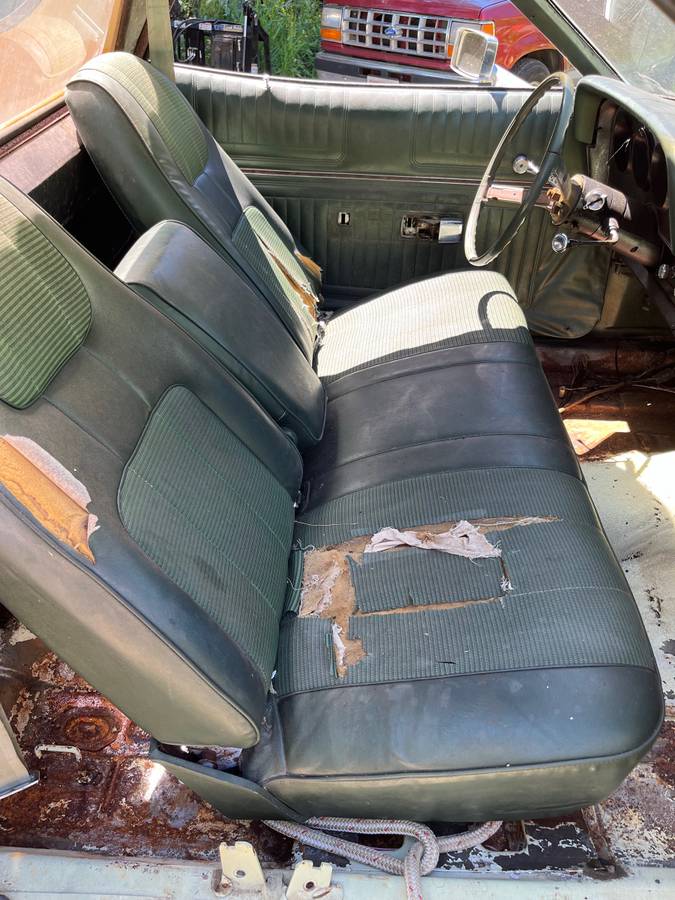 It has some rust, and the interior isn’t exactly pretty, but the good news is that it comes with essentially an entire new interior in a nice brown, except for carpet, which is available for around $200 (I checked). And the seller has extra body parts you can mix and match, and parts cars you can pull from. It’s like a big Lego set! 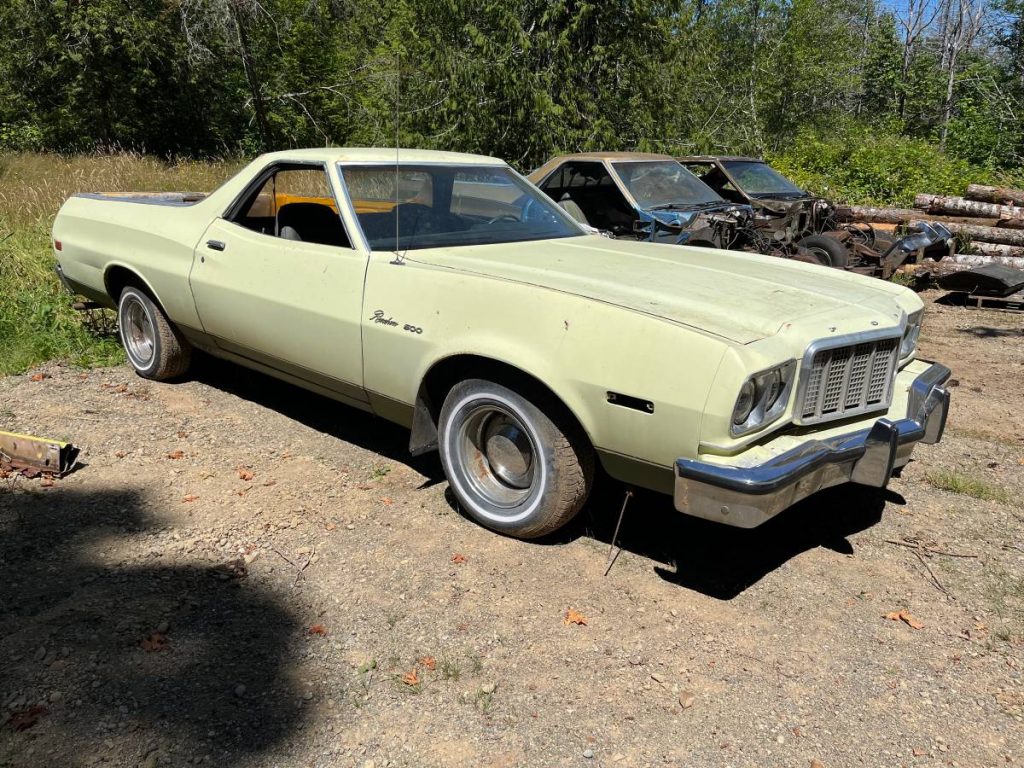 It’s as close as Americans ever got to an Australian “ute,” it’s a pre-catalytic-converter V8 with a manual, and it doesn’t even look half bad as it sits. There’s a lot to like here. 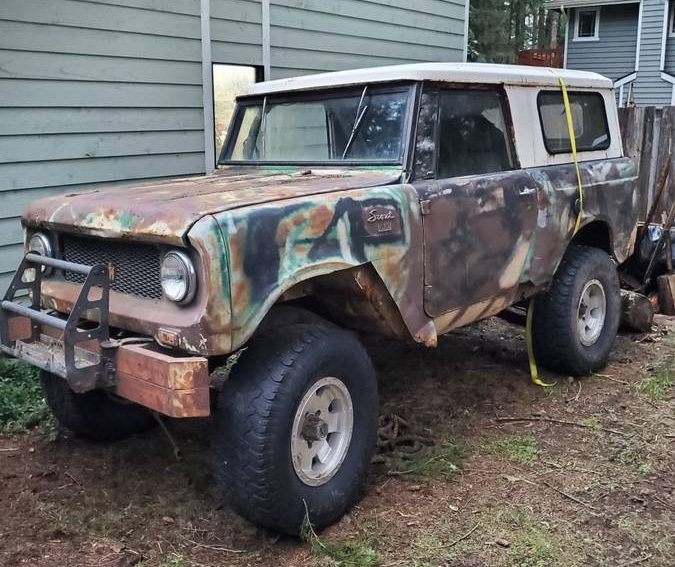 Rather have your 3 speed standard on the floor, and all four wheels driven? We’ve got you covered. This early Scout 80, International Harvester’s answer to the Jeep, is in what the seller calls “buildable” condition. It has a bit of a lift (likely just from moving the springs above the axles instead of below them) and some big bald tires, but otherwise it looks stock. It’s powered by a 4 cylinder International engine, which is basically a V8 with the left bank of cylinders missing. The seller was told it runs, but wasn’t given keys; I would have assumed they would have tried to hot-wire it by now to make sure it runs, but maybe that’s just me. 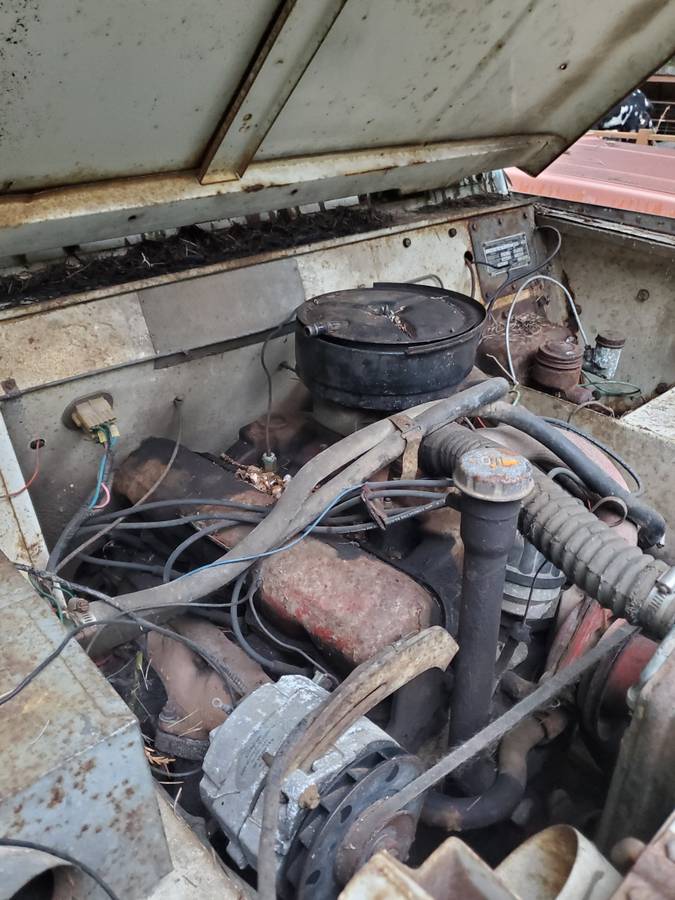 The rest of it is rough, with that awful rattle-can camouflage job, but at least it includes replacement front fenders. They aren’t in great shape, but they aren’t cut back like the ones that are installed on it are. 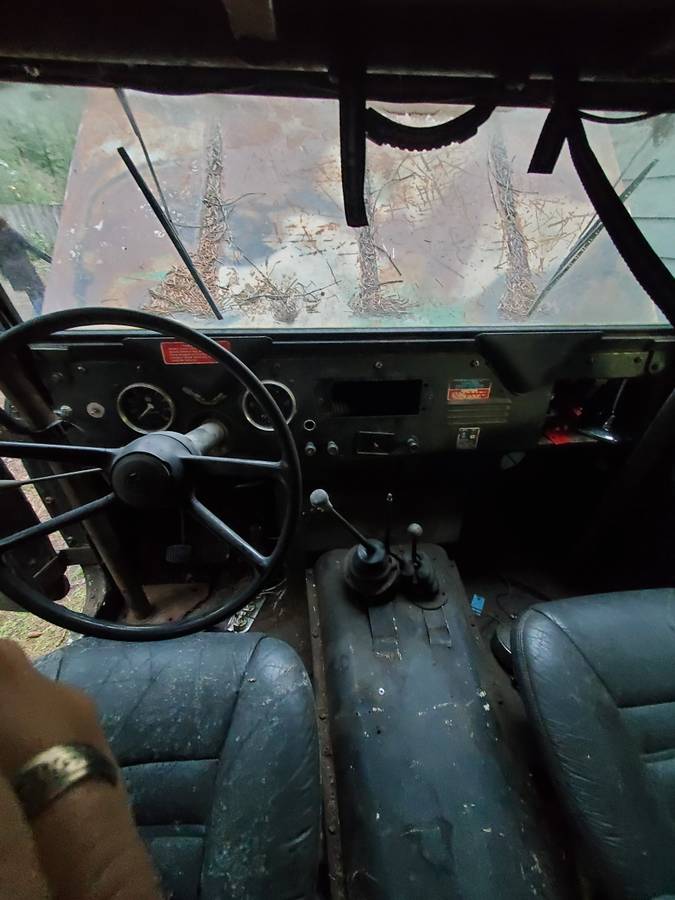 Inside, it’s… well, let’s just say a hazmat suit wouldn’t be the craziest idea before you crawl into this thing. Expect to gut the interior and do what you want with it. But it’s a simple steel box on wheels anyway; you don’t need to get fancy with the upholstery. 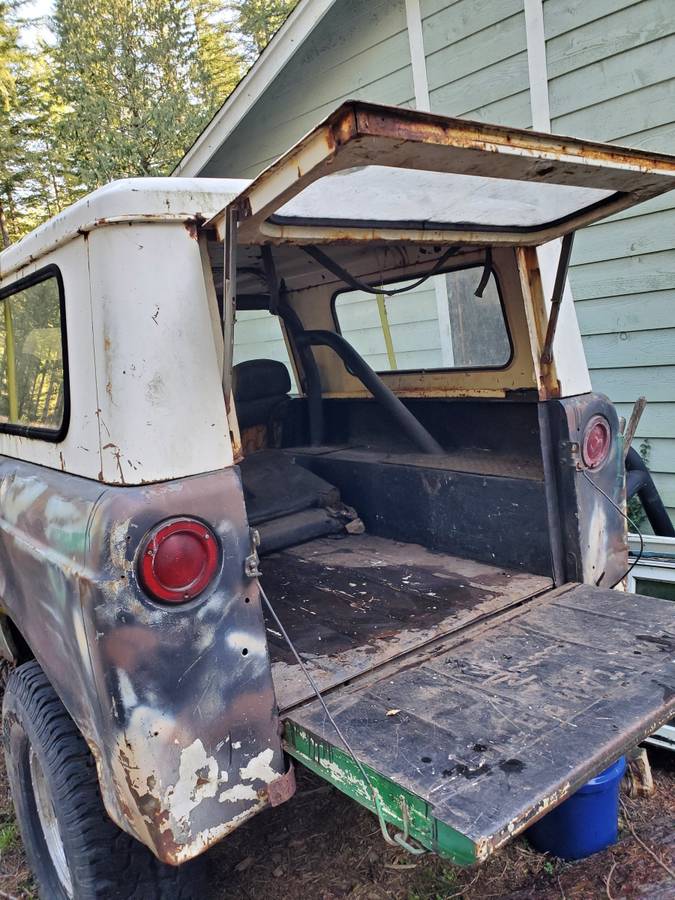 It can be saved, I think, and considering what nice restored Scouts are selling for, this might be a bargain. Not to restore, but just to get nice enough to drive and enjoy. Trailer it home, rebuild the steering linkage, remove and probably burn the seats and replace them with something from a junkyard, and add in a good old push-button and toggle switch for the ignition. It could work.

There they are, two 3 speed standards in different packages.  Which one is your flavor?