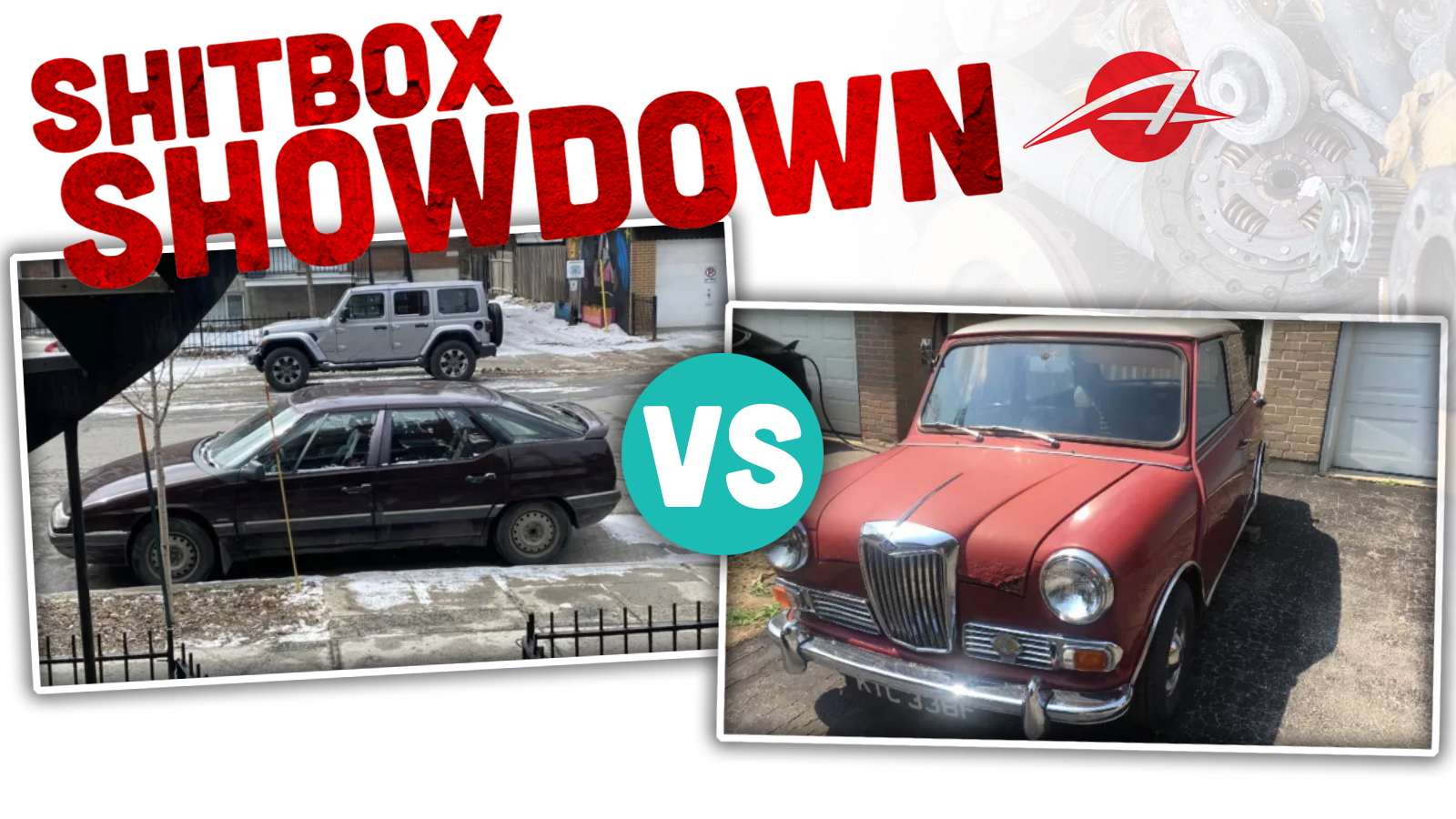 Welcome to a special Sunday evening edition of Shitbox Showdown. Maybe you’re unwinding after the Miami Grand Prix, maybe you have a diagnostic laptop hooked up to your daily driver and are waiting for adaptations to reset, maybe you’ve got the Sunday scaries. Whatever the case, The Autopian Anti-Roll Bar & Radiator Grille is here to quench your automotive thirst.

The usual kernel of any good shitbox is an ounce of sensibility. Parts availability for old Mopar tat is tremendous, most old Japanese cars will run until the bodies rot off and while every electrical component on an old German car will fail, that won’t faze robust engines like BMW’s M30 inline-six and Volkswagen’s unstoppable two-liter eight-valve four-cylinder engine. Hell, I applied this logic when buying my 3-Series as parts are just so much cheaper than they were for my old Infiniti G35.

But what if you want your car to attract more eyeballs than a zebra grazing on the side of I-80? What if you want it to be the automotive equivalent of playing LCD Soundsystem for the rock kids? Don’t worry, I have a ride for you so long as you abide by a few simple principles. First, despite our weekday format having a price cap, true shitboxes have no upper price limit. If a McLaren 570S was briefly parked in a small puddle that happened to come up to the windows, chances are it’s a shitbox. Second, the more distinctive you wish to be, the more work your shitbox will require. Whether spending a year on DuoLingo to build up enough Italian vocabulary to phone the offline Piedmontese farmer hoarding deadstock parts or accidentally setting yourself on fire with a Harbor Freight welder, this won’t be an easy process. However, like crate digging, cool things come to those who put in the hours. Let’s take a trip to my homeland of The Great White North and see what brilliant curiosities pop up.

Runs/drives? It definitely runs, but I wouldn’t drive it far.

A 1989 Citroën XM project may be a financial decision on-par with trusting Bernie Madoff, but at least you’ll have a fabulous Bertone-styled wedge to drive around once your bank account is dry. Sure, the XM never drove out of Grace Jones’ head, but the follow-up act to the CX certainly wasn’t shabby. From the single-spoke steering wheel to the extra rear window behind the rear window, the XM bristles with Gallic charm. It was also the last big Citroën sold new in America, all the way through 1997 by way of importer CXAuto. However, that’s not to say that this particular XM didn’t come through the grey market.

Judging by the absence of giant V6 fender emblems, this XM is a two-liter fuel-injected model with eight valves per cylinder. Power clocks in between 120 and 130 horsepower depending on if it’s a catalyzed model, although a 0-60 time of more than 11 seconds is expected regardless. Hey, it could be slower. Instead of the available ZF 4HP18Q four-speed automatic gearbox, the original owner stuck with the standard five-speed manual gearbox for an added dose of joie de vivre. Indeed, this XM must’ve brought joy considering its odometer reading of 325,604 kilometers (202,321 miles). While a post-DS big Citroën with more than 200,000 miles on the clock is impressive, that doesn’t mean all maintenance has been kept to aircraft standards. Unfortunately, the only phrase I know in French is “Ma bite monte jusqu’à la tour,” but I know enough car parts to get by.

For starters, the seller says that this XM will need either a new or refurbished radiator before it’s wise to drive particularly far. Thankfully, Montreal has some brilliant radiator repair shops, so patching up the cooling system shouldn’t be the end of the world. There are two other minor jobs that allegedly need doing, replacement of the steering rack bellows and welding of the muffler. Two-beer jobs, essentially. The big concern is recommended valve replacement on the Hydractive suspension. While this Phase I example doesn’t have the added complexity of Hydractive 2, its suspension system is still more complex than the logistics behind sending a cheeseburger into low Earth orbit.

Combine the suspension maladies with the extremely niche audience for this large slab of French magnificence and it’s no wonder that this XM has been on the market for a long time. I mean come on, there’s still snow on the ground in the advert pics. Still, there’s a certain perverse joy in knowing that this XM is 58,796 kilometers (36,534 miles) from having essentially driven to the moon and that someone could manage that feat with a spine-bashed copy of Foucalt’s The Order of Things in the door pocket. Who knows, maybe that someone could be you? At $5,500 Canadian ($4,258.05 at the time of writing), where in North America would you find another one this cheap?

You may be thinking that I only threw this Riley Elf in the mix to make the Citroën look good, but bear with me. This rusty, trusty Mini-based sedan has more benefits than meets the eye. With a coachbuilt body by Fisher & Ludlow, the Elf was the poshest Mini variant you could buy off of a British Leyland forecourt in 1968. Not only did it offer a traditional sedan silhouette, it also featured the decadence of a full-width wood dashboard with dual gloveboxes. All the chrome and wood of an executive car with the brilliant handling of a Mini. What’s not to love? What we’re looking at here is a Mark III Elf with wind-up windows and hydrolastic suspension. It may not be as complex as Citroen’s Hydractive suspension, but at least it’s hydr-something.

This Elf’s story starts back in England, where the current seller picked it up as a daily driver. Christened Katy, this Elf is said to have gone on many adventures on British soil including annual participation in the Bromley Pageant before following its owner across the pond. Sadly, time on Canadian soil hasn’t been kind to Katy, with the Elf’s owner allegedly parking it in 2015. As it stands, the Elf doesn’t idle but is alleged to turn over and make good oil pressure.

Fortunately, the Elf’s owner has a full list of everything it would need to be recommissioned. Unfortunately, it’s a very long list indeed. According to the seller, the right front and left rear brake cylinders are leaking, the CV boots are ripped, the coolant is browner than what came out of the Dave Matthews Band’s tour bus in 2004, both front lower ball joints have play, the carburetor needs some work, and the floor has a few speed holes. There are also said to be oil leaks, although that’s just a BMC A-Series engine operating as normal. What isn’t so normal is the gearbox. The seller alleges that a previous owner swapped an automatic gearbox into this Elf sometime in the 1980s, a statement that seems quite plausible judging by the presence of an automatic gear selector from a suitably classic Mini.

Right, lots of stuff to sort, but at least parts are fairly available. After all, around 5.3 million Minis were made between 1959 and 2000. A bit of welding, a few mail-order parts and Bob’s your uncle. All you need are tiny little hands and a basic set of spanners to enjoy slow, reasonably opulent, exceptionally well-handling classic motoring.

So here you go, two oddball European motors, both with their own foibles and delights. They’re perfect for the sort of person who uses Koss PortaPros, wore plastic-framed spectacles before they were mainstream again, and have a fixation on things both nostalgic and dramatic. While the Elf’s $10,000 Canadian ($7,741.90 at the time of writing) is almost double that of the XM’s, list price is only the down payment on any shitbox. What sort of brave are you feeling?

Thomas is a Nu Rave-blaring, heel-toe downshifting, maple syrup-swilling, chassis-geeking, junkyard parts-hauling, floppy-haired scenester who's been writing about cars since college. His current ride is a 2006 BMW 325i with the six-speed manual gearbox. Instagram: @thomas.hundal Twitter: @thomashundal
Read All My Posts »
PrevPreviousAs Someone Who Loves Cars, I’m Struggling To Decide If I Want To Move From Detroit To LA
NextCold Start: BRAT Best, Not BratwurstNext