Facebook-f Twitter Instagram Rss
Menu
Menu
Home » As Someone Who Loves Cars, I’m Struggling To Decide If I Want To Move From Detroit To LA

As Someone Who Loves Cars, I’m Struggling To Decide If I Want To Move From Detroit To LA

I’ve been struggling with this question for years. I just keep going back-and-forth — I love Detroit; it’s the greatest city in the world for car people, and I won’t even hear arguments to the contrary. I can buy running motors for $145, rent a house with a proving ground out back for under $1,000 a month, hang out with car enginerds and designers on a regular basis, tour incredible junkyards and snag dirt-cheap parts every weekend, spend a reasonable amount of money on gas, and just generally do dumb car stuff with great people for cheap. This place really is the Motor City. But I don’t know if I can stay.

You all know me as the rusty Jeep guy from Detroit, but I’m not from here. I have no family here, no childhood roots, and fewer and fewer ties as many of my friends seem to all move away. But I have stayed for nine years — the longest I’ve ever lived in one place. It’s counter to my nature as an “Army Brat,” and indeed, in the early days after my move here from college, I thought for sure I’d be rolling out within a couple of years. But I stuck around because the car culture is unbelievable (and also because I travel out of the country for usually a month or two out of the year, so this keeps things spicy).

Watch the Instagram video above, and you’ll see what I did today. After waking up, I drove to the legendary Pasteiner’s Cars and Coffee meetup, then headed to a junkyard and gawked over awesome machines with a cool reader named Nick (plus I ran into the legendary engine-carrier, Jeremy Benson, who was wrenching on a Ford Ranger), then helped Nick get unstuck from my muddy backyard “Proving Ground,” and then I just drove around in my brother’s 1966 Mustang to a bunch of car parts stores (and obsessed over how cheaply I can get high-zinc Diesel Oil and high-quality Purolator filters). It was a great day in the month that caps the beginning of half a year of absolutely perfect weather followed by genuine frigid hell.

I know how good I have it here. I can experience things that translate to great content that can help this site thrive, and that, of course, is really important. I have space; cars; a low cost of living; friends and neighbors who genuinely share my passion; specialty car shops run by old-timers who will (cheaply) machine my cylinder heads, replace my leaf spring bushings (and make me custom U-Bolts), braze up my leaky radiator, rebuild my starter motors and generators; no vehicle safety or emissions inspections; a big airport that will get me to Hong Kong, Germany, Australia, or wherever the hell I want to do dumb car things next; car shows damn near everyday; access to tremendous automotive knowledge, and on and on.

Prior to my arrival in Detroit, I had mixed feelings. After having seen documentaries about abandoned Detroit neighborhoods, and after living in the city and witnessing the blight in person, I initially wondered: “Is this still the Motor City?” After nine years I know that the answer is, well, not really — it’s actually the Motor Suburb, but it’s still freaking incredible.

Well, for one, I don’t know if I’m built to live in one place too long. As I’ve said before, I have no roots anywhere, and my childhood showed me the incredible richness I can get out of life by experiencing new places. And not just a few weeks at a time; many months or years — enough time to really embed myself into new cultures. Remaining in one place is something with which a lot of children of service members struggle.

I’m not going to complain about the winter or the salt; those are what they are, and I’m not sure how much they’re factoring in my decision, anyway. My main considerations involve shaking things up and experiencing something new, and also possibly diversifying my social life outside of work. Regarding the latter point: Is suburban Detroit the ideal place for a single 30 year-old dude to thrive socially? It’s possible that LA is no better, honestly. I don’t have the answers.

Why LA? You’re all now wondering.

It’s tricky. I mean, part of me wants to move to Germany to be with my family — buy an Audi A2 and Renault Twingo, and road trip all over the place. Another part of me wants to move to Kansas or Arkansas, buy a big-ass plot of land, and just go absolutely crazy buying cars by the dozens (though the social scene could be a concern). I anticipate one of those happening at some point. But L.A. offers some opportunities right now; for one, it’s becoming more and more Motor City 2.0. Dozens of my engineering friends from Michigan have moved out west to work for budding EV companies. There’s a lot of great electric vehicle stuff going on over there, and I’d like to be able to explore that side of car culture. I’ve reached a point of diminishing returns when it comes to discovering Detroit’s car scene — the idea of exploring a new one excites me.

Of course, there’s theoretically a decent social scene filled with diverse people — something appealing to me at this point in my life. There’s also The Autopian’s main supporter, Beau Boeckmann and his amazing team — working with them in person could afford our site a number of great opportunities. And really, that’s where my priority needs to be above all else: Trying to do what’s best for this company and its readership; if working with my team out in California helps us, and if it also happens to scratch other itches of mine, then that seems smart. LA is not exactly wrenchtopia, but I’m doing more editing than anything these days. Plus, most of my wrenching seems to be happening on other continents, anyway.

Plus I bet the off-roading is great in California, and the weather will mean year-round wrenching and no rust. Let me repeat that last one: NO RUST. I’ve been in basic training these past nine years; just imagine me wrenching on California cars — I will be a wrenching god!

Obviously, cost of living in insane. Wrenching on junkers on the side of the road in LA sounds, honestly, no worse than fixing crap-cans in 20 below weather here in Michigan, but still not great. Gas is expensive, emissions inspections would definitely preclude my Jeep J10 from going out there (I’d be rolling in the Mustang and my future overlanding rig, my $350 Holy Grail ZJ. Also my FC, though I realize three cars out there will be rough), and I have my concerns about car culture in LA. Is it too exclusive? Is it difficult for the less privileged to get into the car scene? Is it all about wealth flaunting? (For you LA natives, my apologies for the ignorance. That’s just how it looks from the outside). Is a haggard, balding, recovering trenchfoot-er who’s suffered far too many harsh winters wrenching on rusty heaps going to stand out among all the good looking models? Will everyone I interact with either avert their eyes or instantly vomit?

To these, I have no answers.

Honestly, I have no answers to any of this. I do know that I’d want to return to Michigan later in life, because this place feels “free.” There’s very little bullshit here except for an occasional police officer from some fancy suburb pulling me over for passing him in a snowstorm. But otherwise, I can do what you want, and have plenty of space for it.

As for right now? I’m getting antsy, and lots of people in my life keep telling me that hoarding cars in suburban Detroit maybe isn’t the optimal long-term strategy. They’re probably right. Honestly, I could see myself blinking once and then all of a sudden another nine years pass by, I’m still here hanging out with a fleet of cars at age 39, with a stack of ordinance violations on my counter. Honestly, depending on the cars in my fleet, that sounds kind of epic. But also not — again, I’m conflicted.

One thing I’m not conflicted on, after spending the past four hours researching, is how to minimize the cost of maintenance of my fleet. I have found that base-model Purolator oil filters, when purchased in bulk, can be had for less than pretty much any oil filter you can buy, including Walmart Super Tech oil filters (some of which I’m pretty sure are just rebranded Purolators). Check it out — $29.21 for twelve Jeep 4.0/Mustang filters! That’s just $2.43 a pop! As for my Jeep 258 filters, those were a bit more expensive at about $2.80, but still dirt. 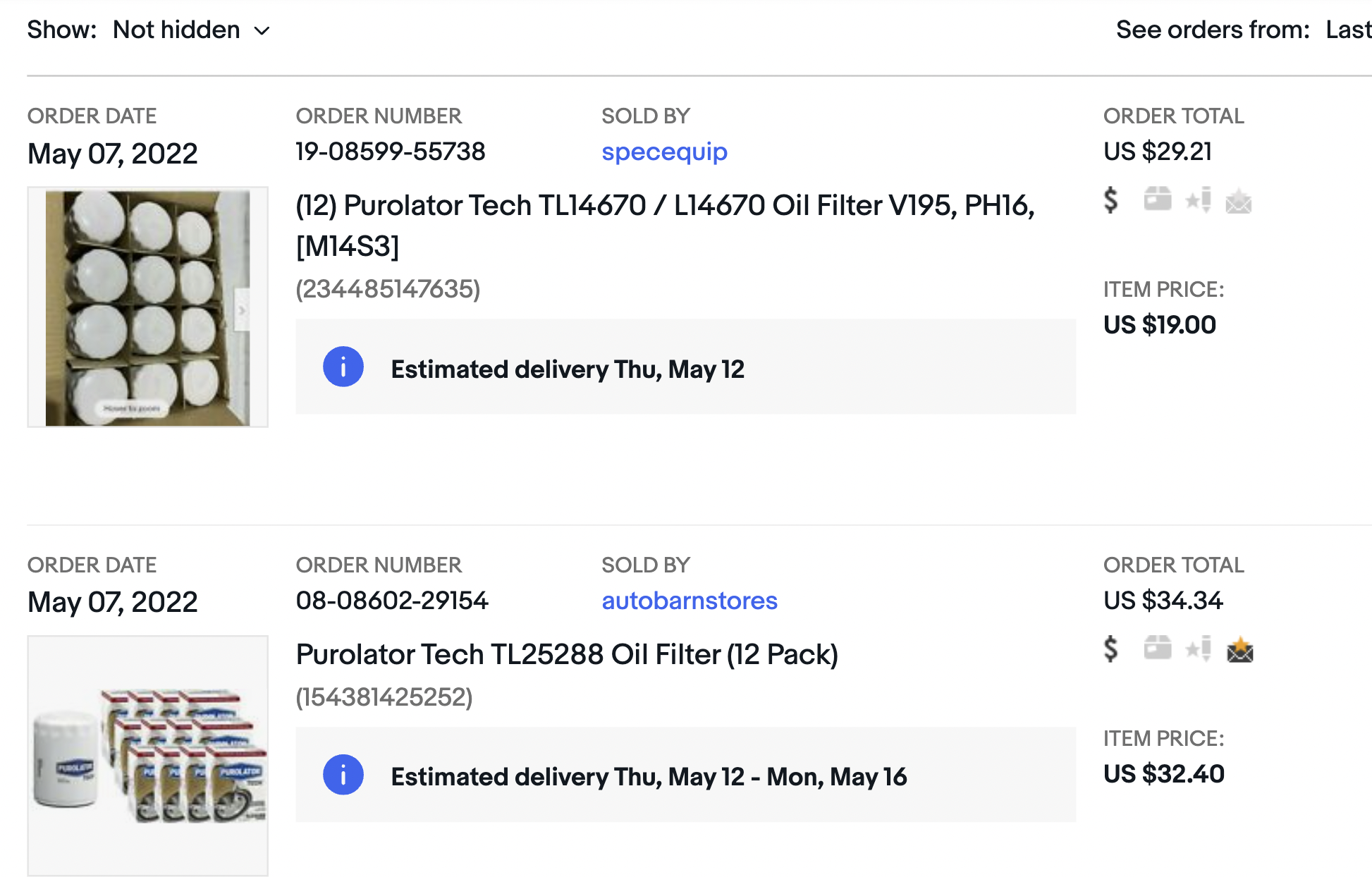 These filters, along with diesel engine oil — which is high in zinc (which is good for flat-tappet engines like those in my vehicles), and, when purchased in 15W-40 weight can be had for pennies — basically mean I can change my oil for less than $20. I spent quite a bit of time researching whether I can use my Jeep’s TL14670 filter on my brother’s Mustang. Turns out, I absolutely can. I also read through service manuals and owner’s manuals to see if 15W-40 is an acceptable oil for the Ford 289 and Jeep straight six, and it turns out the answer is yes, in the summer (I don’t drive these vehicles in the winter, anyway). This is all great from a cost-of-maintenance standpoint.

From the Mustang manual (it even says oil as thick as 20W-40 will work): 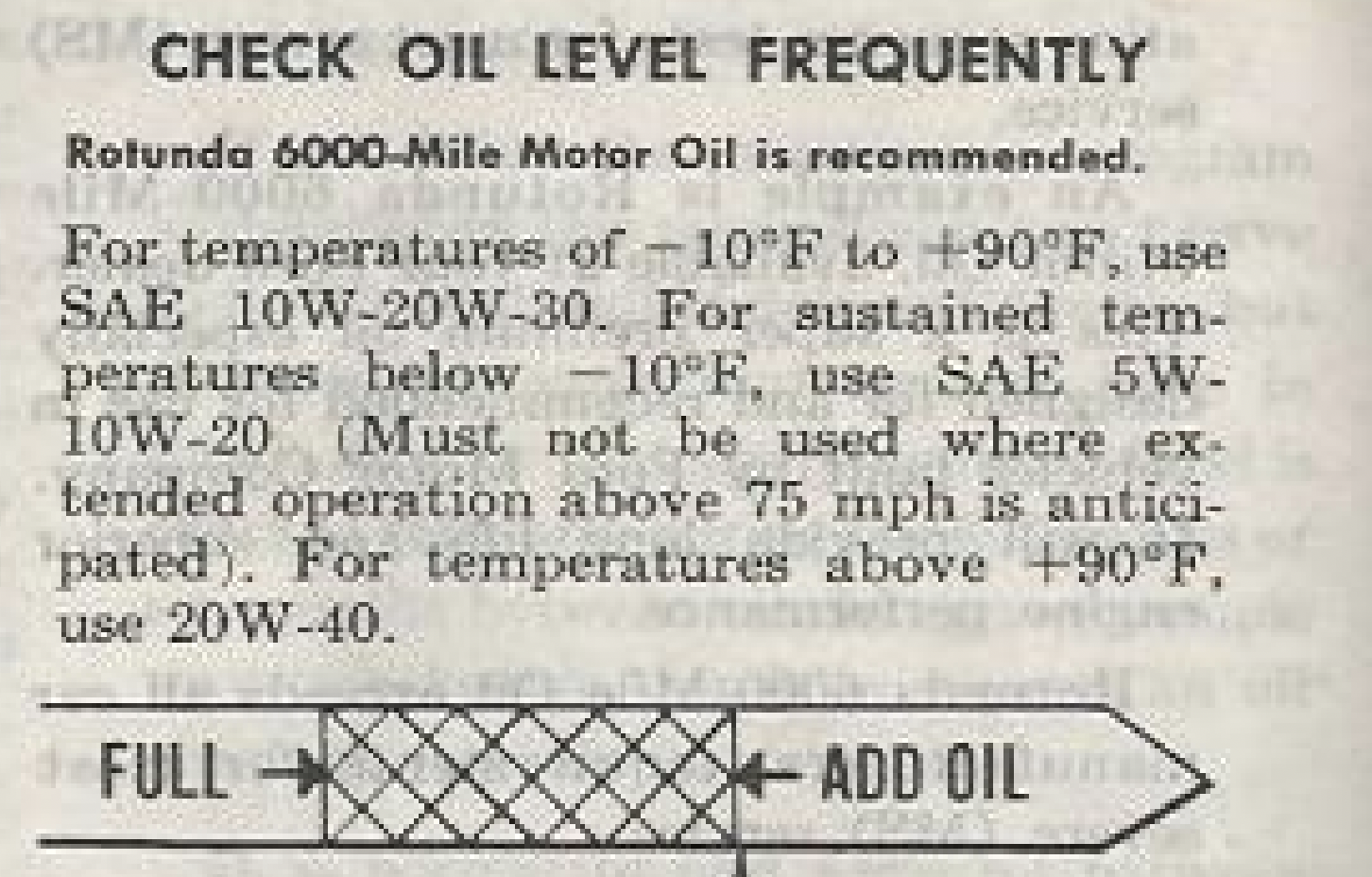 From an old Jeep manual: 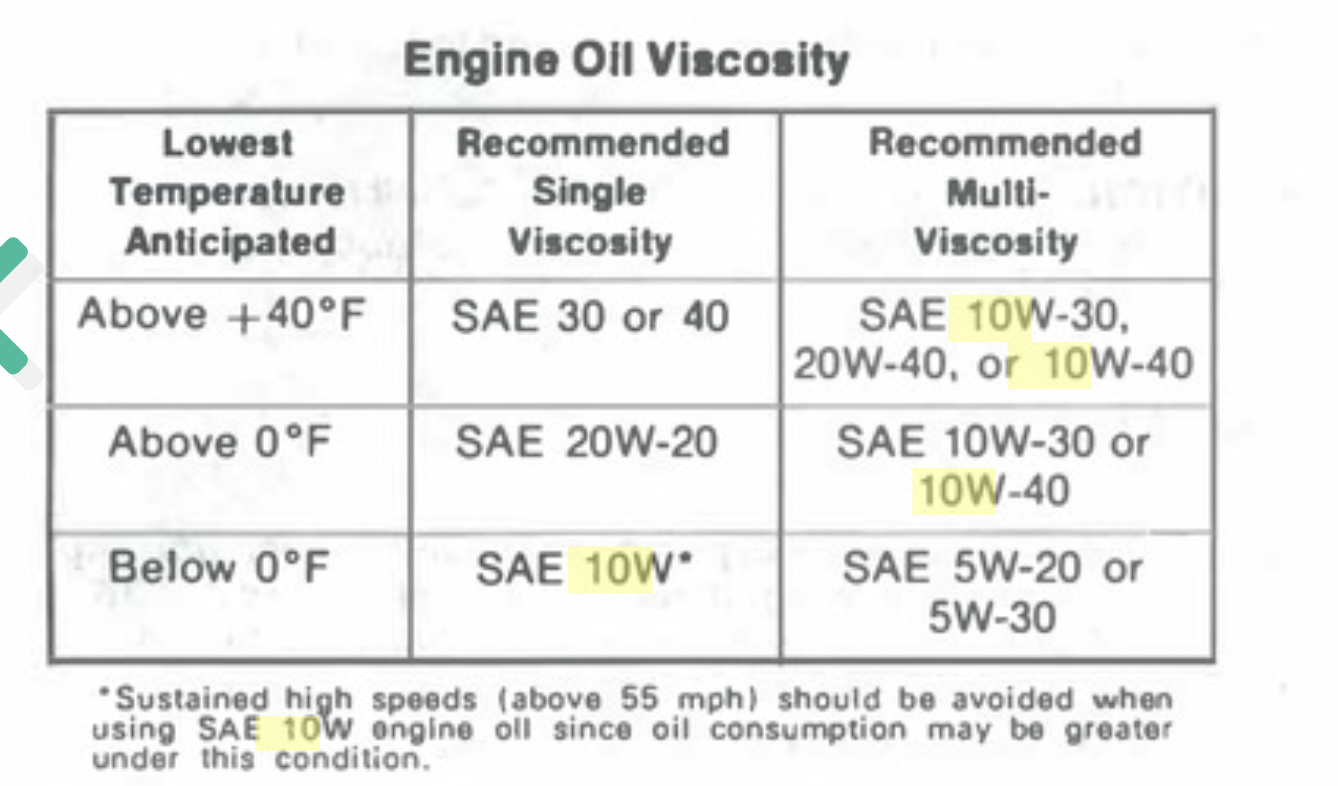 Anyway, that was a hell of a digression, but that’s what my day was like today. Car show, junkyard, mud pit, trips to car parts stores and far too much research on oil change cost minimization. This is normal, right?