The Entire Autopian Staff Flew Into LA To Host A Car Show. Here’s How It Went

The entire Autopian staff, plus our veteran enginerd Huibert Mees and our Shitbox Showdown guru Mark Tucker, flew into LA this past weekend to host a car show at our co-founder Beau Boeckmann’s automotive Mecca in Van Nuys, California. Here’s a look at how it went.

The Autopian has existed as a website for only four and a half months, with great growth resulting from the work of some incredibly talented writers, all of whom work virtually, and many of whom have never met one another in person. So this weekend was special; it was a chance to build a bit of camaraderie between the folks who have been grinding together day in and day out to make you, our beloved readers, happy. Most of all, it was a chance for us to meet you.

As Is Tradition, A Slight Shitshow Did Take Place

It started as a bit of a shitshow, and of course, this was my fault.

I woke up at 5:30 AM in Troy, Michigan to catch a 7:55 flight. An Uber, a five hour hop, and then another Uber got me grippin’ and grinnin’ with my business partner Beau and his team at the Galpin headquarters in Van Nuys, California. After those brief pleasantries, I drove back to LAX to pick up The Autopian’s camper/RV/motorcycle expert Mercedes Streeter and in-house former Tesla/Ford GT engineer Huibert Mees, who had arrived from Chicago and San Francisco, respectively. This all went great, and the three of us chatted each other’s ears off about cars on our way back from the airport in my rented Ford Explorer.

At about this time, Beau received an urgent message from his team. “Hi Beau, we just got a call from the police. They just found David’s car keys.” 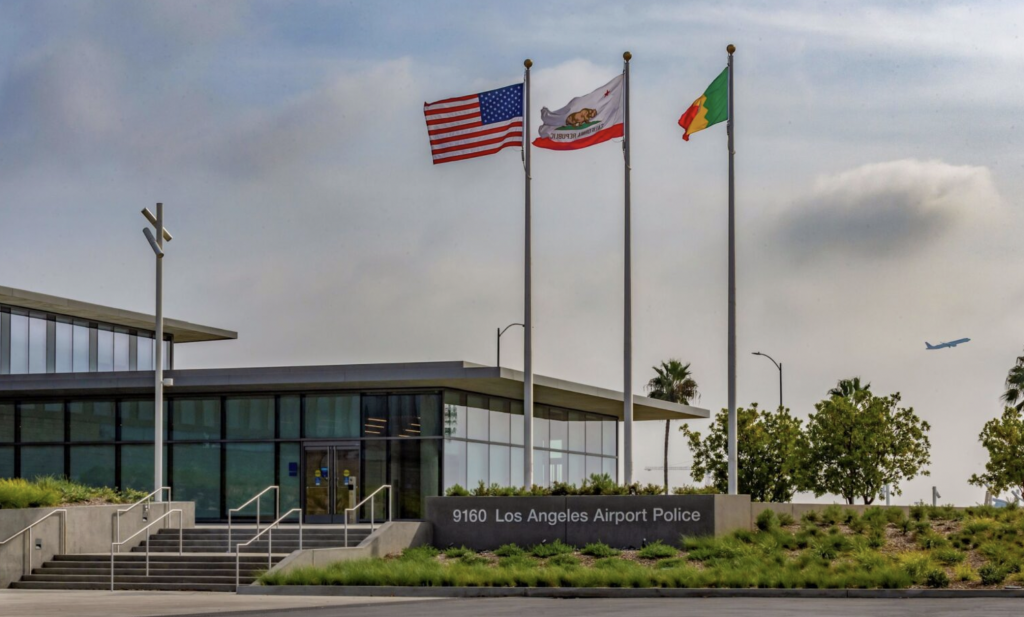 Beau — of course concerned about how the police had the keys to a car that I was supposed to be actively driving to pick up the team — called me, at which point I realized I was driving 70 mph down a highway in a car with no key in sight. Damn proximity keys!

There was no warning or anything on the screen, so had Beau not called me, I’d probably have shut the car off in a deeply inconvenient location and been stuck there. Luckily, Mercedes, Huibert and I were able to “flip a bitch” (a term I learned from our Shitbox Showdown guru Mark Tucker; apparently it means “execute an (illegal) U-turn”). After parking at the wrong station, and Huibert nearly slapping my hand to prevent me from touching that “engine on/off” button and getting us stranded, I wound up at an incredibly impressive and intimidating LAX Police Station, where I was the only person in sight aside from two officers behind a thick pane of glass. I handed them my info, and in short order, I had my keys.

[Editor’s Note: David isn’t telling the whole story here. Another minor but terribly revealing incident happened when David went to collect the keys. While walking to the Airport Police station, David saw a lost $10 bill on the ground. Like absolutely no other rational human would do, he picked it up and turned it into the police.

What the hell did he think the cops were going to do? Issue a bulletin for all officers to be on the lookout for anyone who may be missing a ten dollar bank note, green and with a portrait of musical-theater hero Alexander Hamilton on it? No, of course not. Normal human beings just pocket a lost $10, just like the cop behind the counter likely did.

You know what happened next? As David was leaving the station it dawned on him that, since not a single soul had entered or left the building while he was there, the $10 he found was actually his own money. He gave the cops $10 of his own cash for absolutely no reason at all. A tip, I guess? What a rube. – JT] 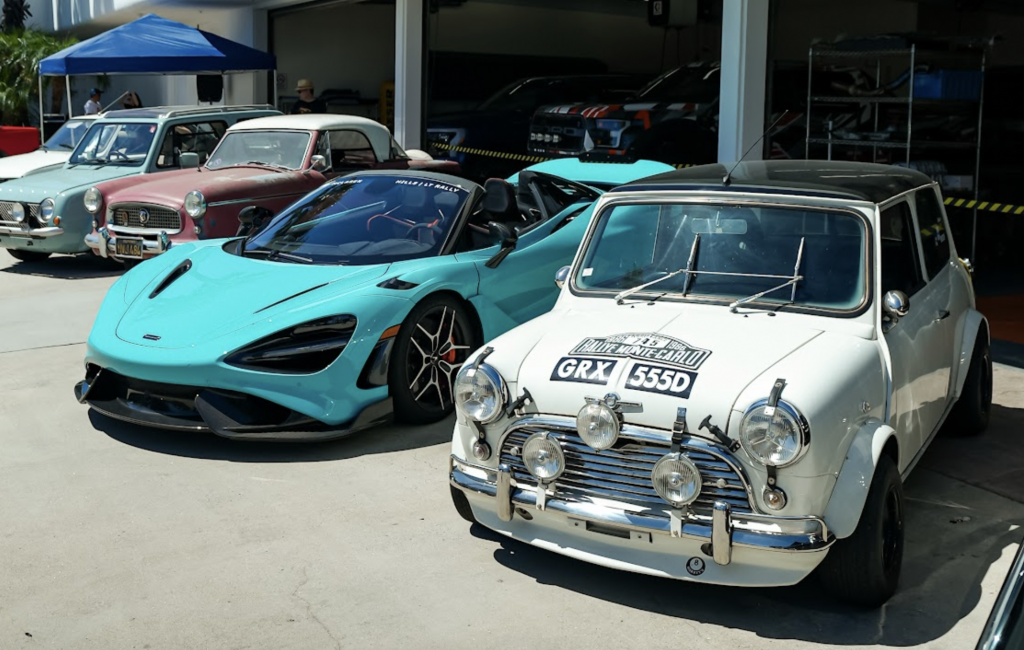 I don’t have a good idea of how many people actually showed up, but considering 60 pizzas were dusted, and running some educated guesses on how many slices each person ate on average (figure a quarter of a pizza on average among those who ate, and one of every three devoured any pizza at all), I bet there were over 500 folks there throughout the day, including one dude who came with printed sheets of things he wanted to discuss with each writer. It was awesome. 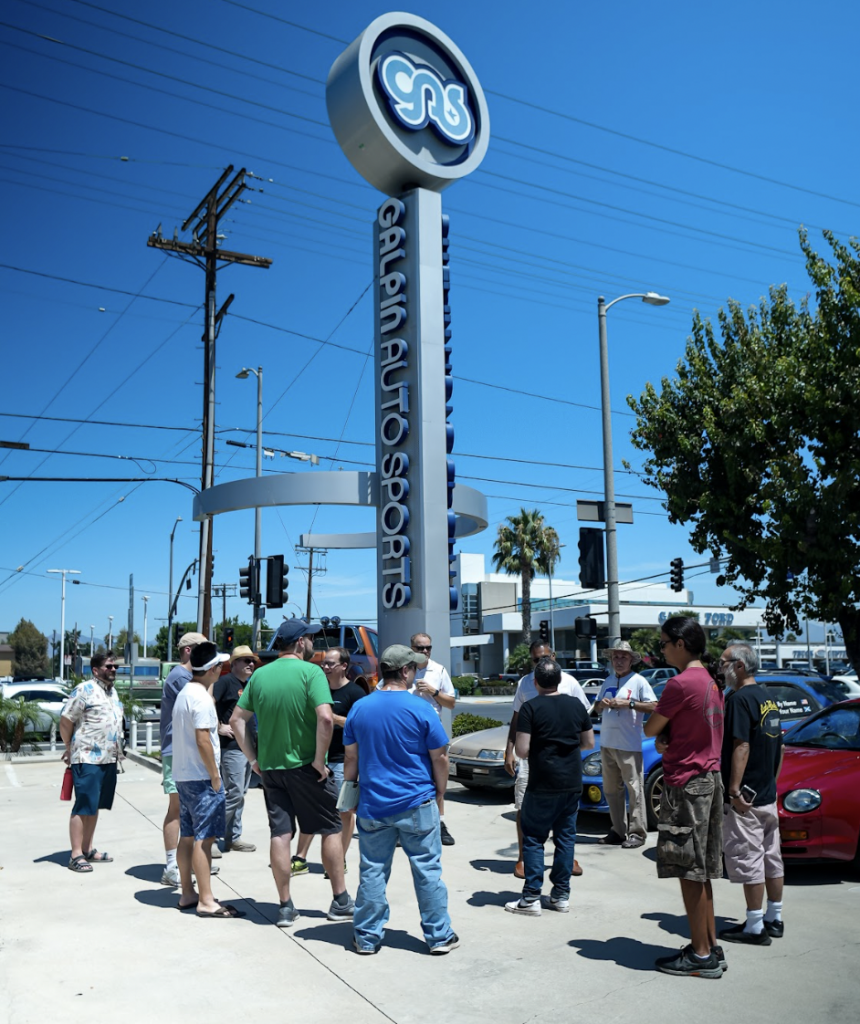 Here are a few shots of our whole crew, which included Torch and me as well as: Mercedes Streeter, Thomas Hundal, Huibert Mees, Matt Hardigree, Mark Tucker, Bobby Mackay (STAB), and of course Beau Boeckmann (who you can see below having an awesome time hanging out with a reader). 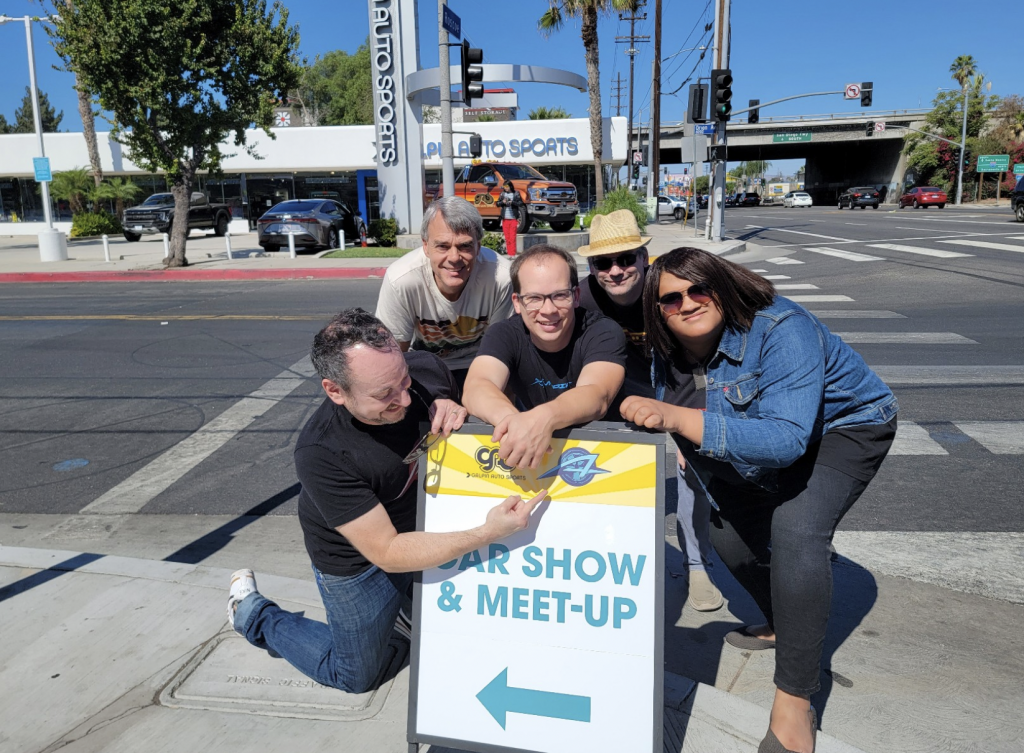 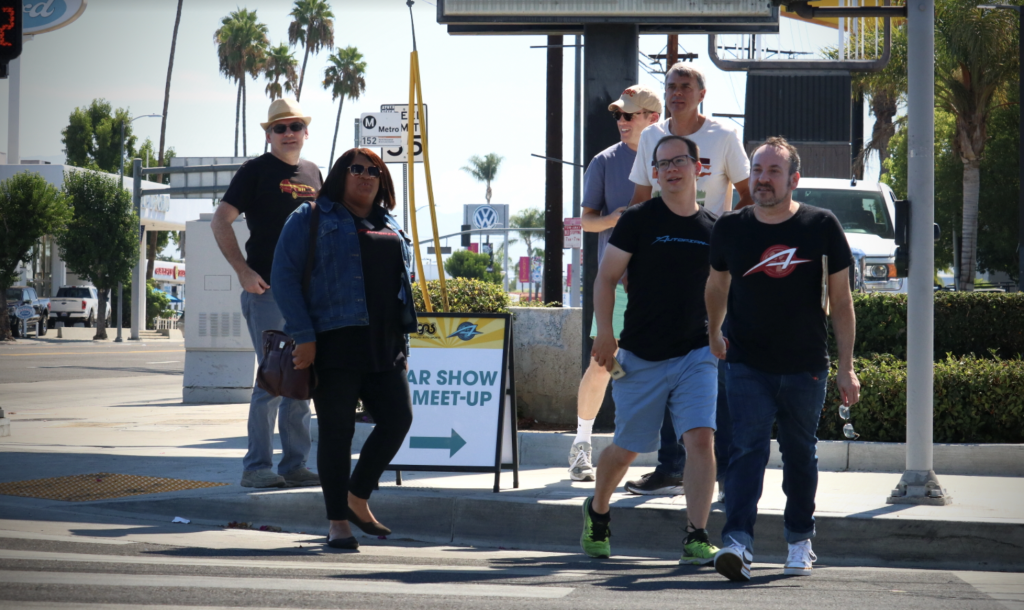 One of my favorite vehicular showings at the event was this Pontiac Grand Am, because unlike rare sports cars, these vehicles were just not kept up well by the majority of their owners. For one to exist in this state in 2022 is a miracle: 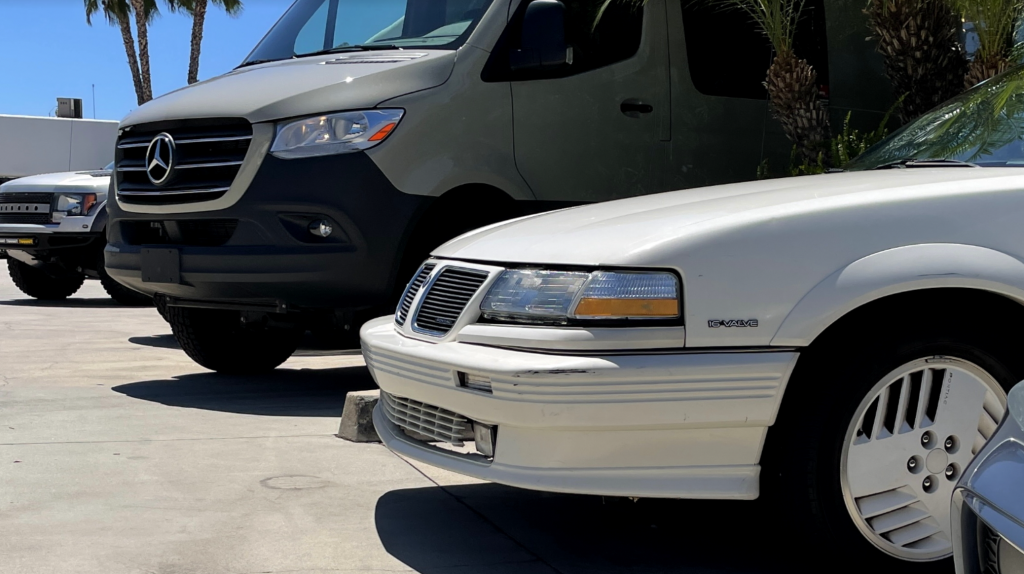 Okay, actually, I think that might be tied with this right-hand drive Toyota Gracia wagon: 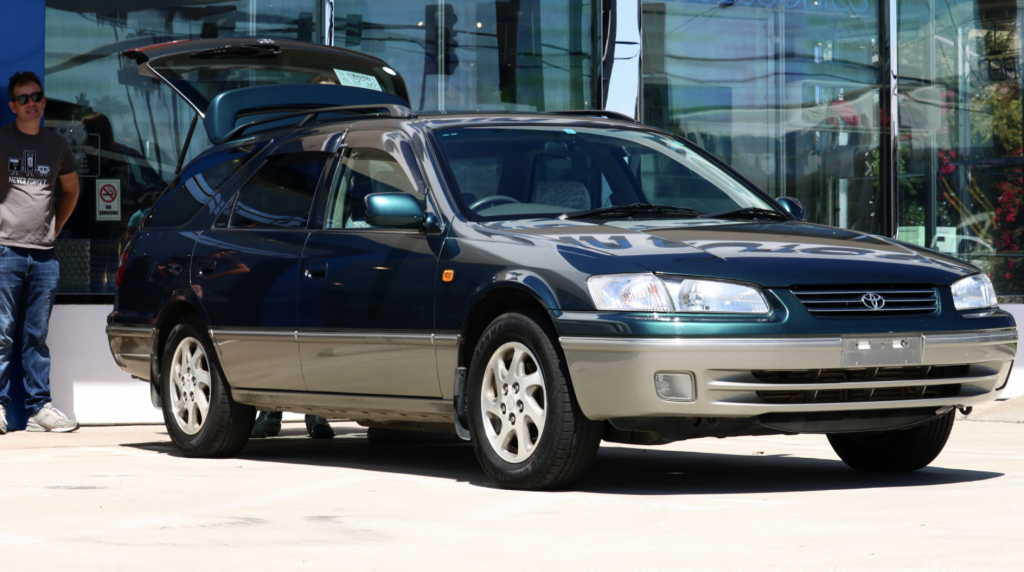 I also got to walk around multiple Ford GTs with our former Ford GT suspension engineer, Huibert Mees. We geeked out, so be prepared to see that all on video: 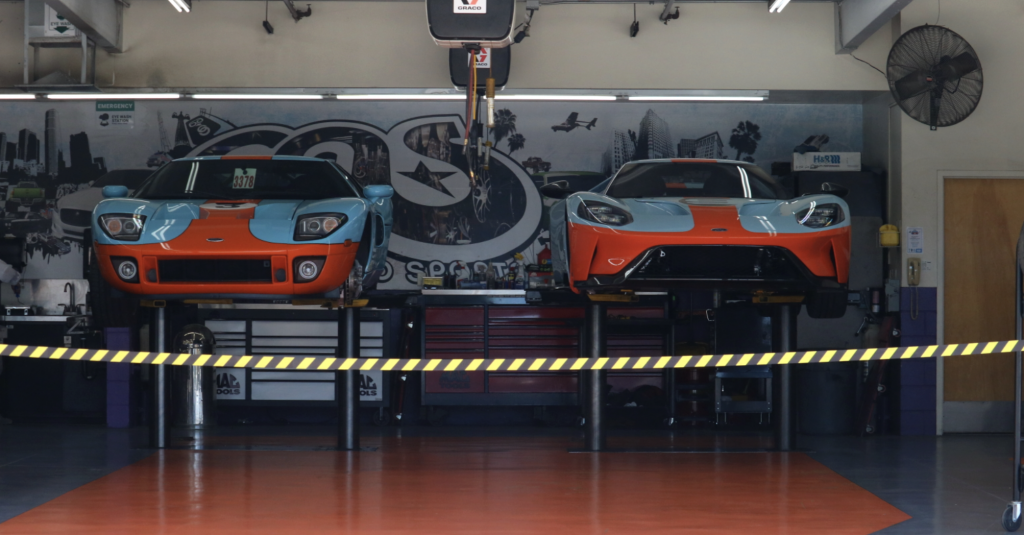 Here’s Jason [Editor’s Note: What the hell is going on with my face there? – JT] and I just relaxing next to our friend Tom’s incredible Rambler wagon: 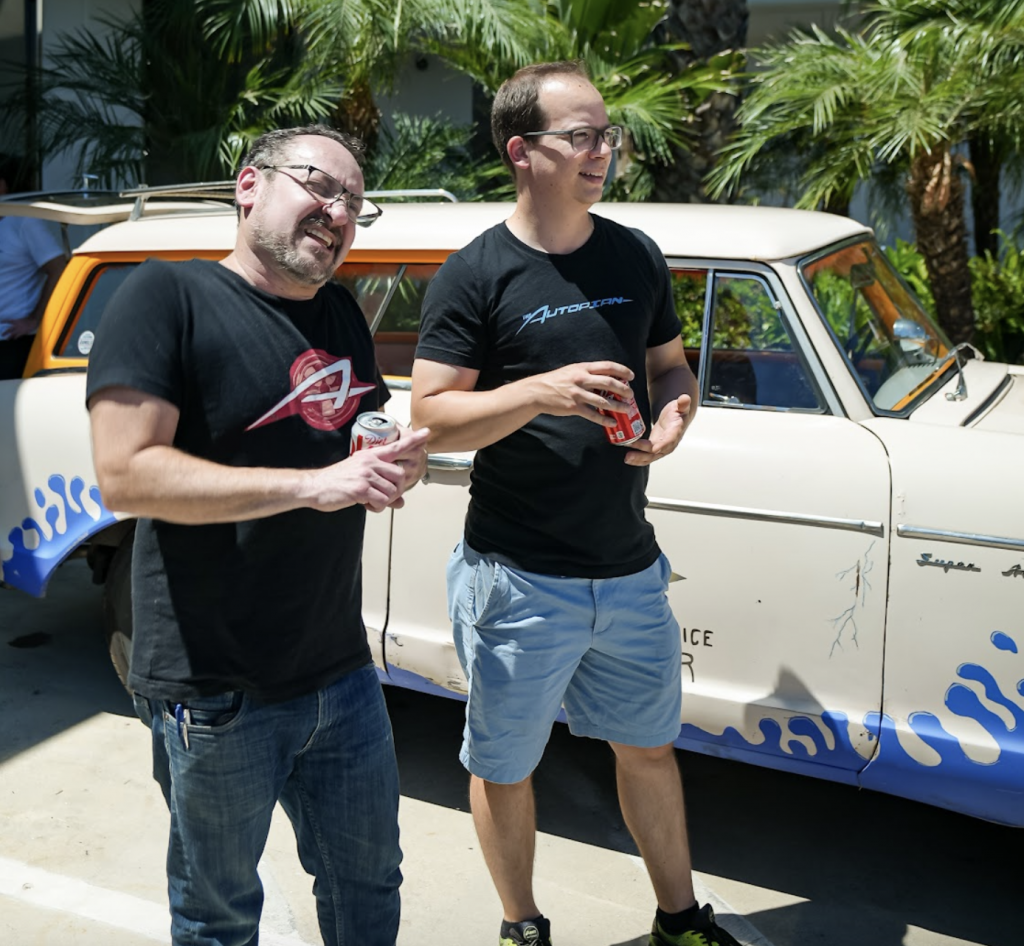 Speaking of Jason, I’m going to let him take this article over, because as excited as I was about the cars at the show, nobody was excited as he. So I figure I should let him talk to you about it: 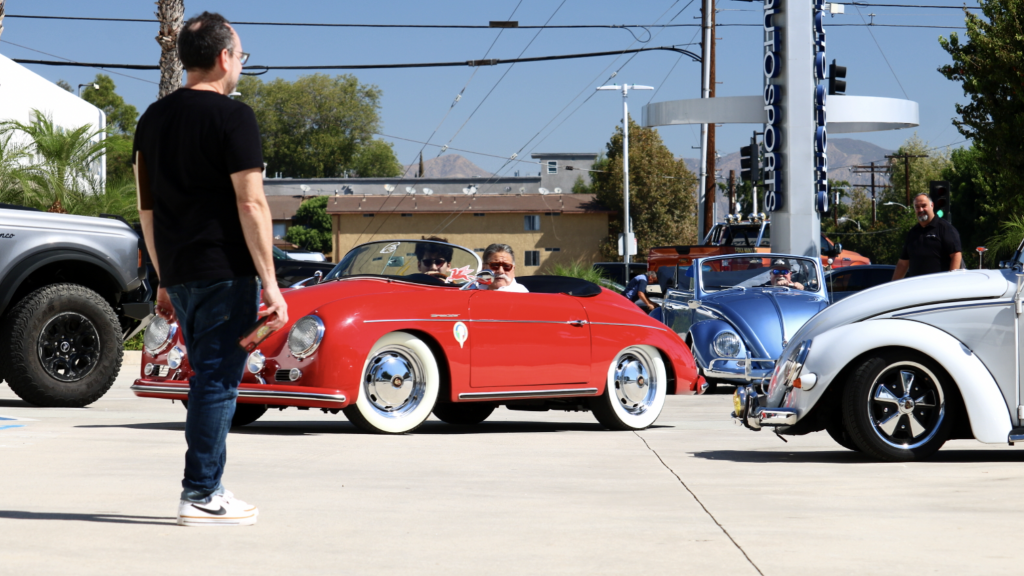 Thanks, David, for passing off this article you said you’d write two days ago for me to finish! Very cool!

I kid, I kid! David’s great, and we’re all busy, and I’m delighted to do this.

Let’s start with that 356 replica and all those fantastic Beetles up there: they were the San Fernando Smurfs VW club, and they showed up early, in force, with many beautifully-restored old Beetles, almost all of which had beefy twin-Weber carb engines and were immaculate. The crew also included the incredible Type 3 I wrote about yesterday. Just having a whole club show up, enthusiastic and loud and early, was a huge treat.

Let’s look at some of the other incredible cars that showed up. For example, you saw up above there a dazzling David Hockney pool-painting-blue-colored McLaren parked next to an original Mini in full rally dress, dripping with lights and straps. So good. And there was so much more.

For example, this crazy thing made by former Jalopnik contributor who now goes by SuperfastMatt on YouTube (check him out): 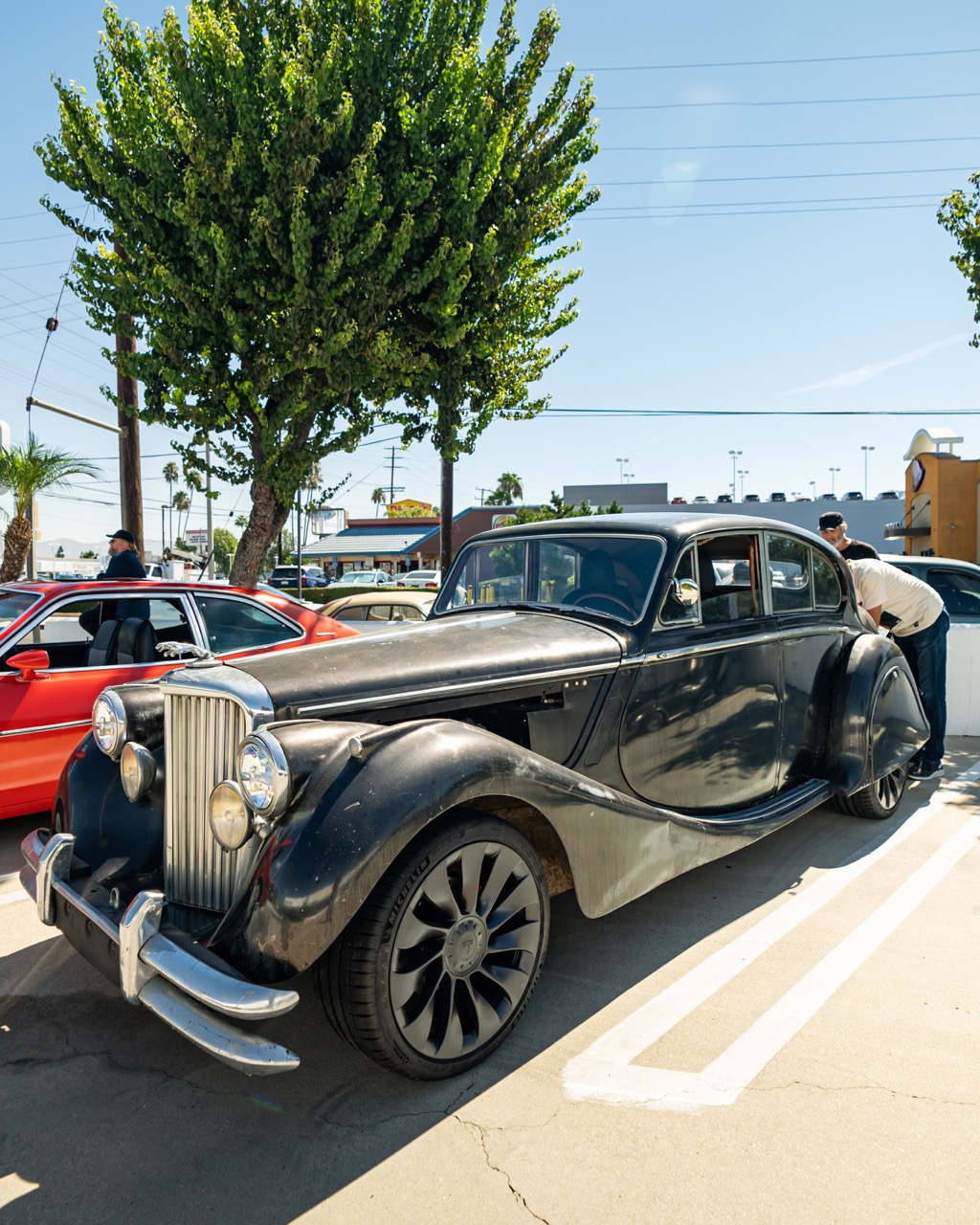 This is a Jaguar Mk V, made somewhere between 1948 and 1951, but instead of the 3.5-liter engine advertised on the hood badge, this particular one has a bit of a secret, hinted at by those wheels: 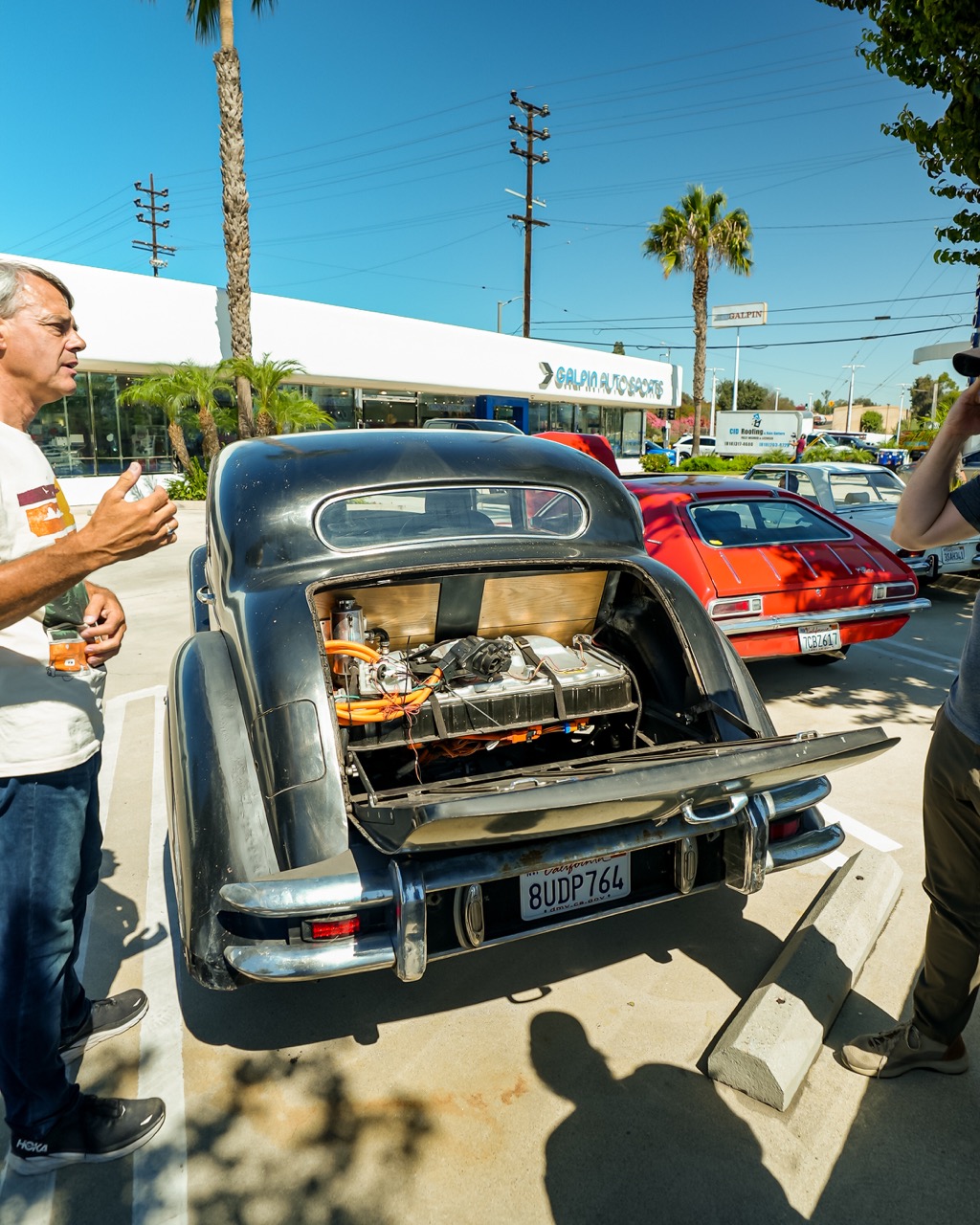 That’s a Tesla Model 3 drivetrain in there. You can see the inverter and electronics box there, the motor unit is below that, and the battery pack is slung underneath. The front suspension is from a Mustang II, of all things. This is one hell of a Frankenstein, and I’m so happy it showed up. 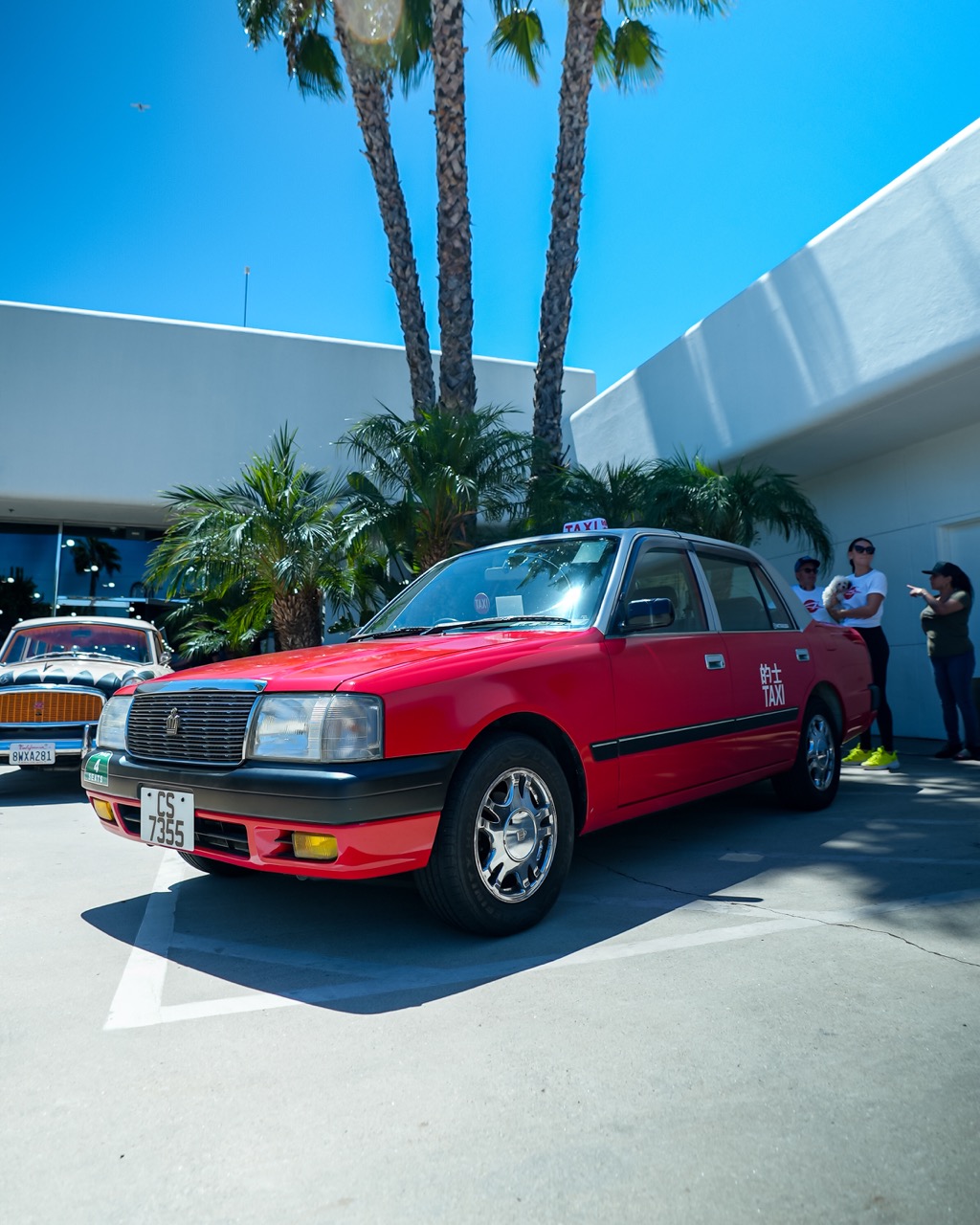 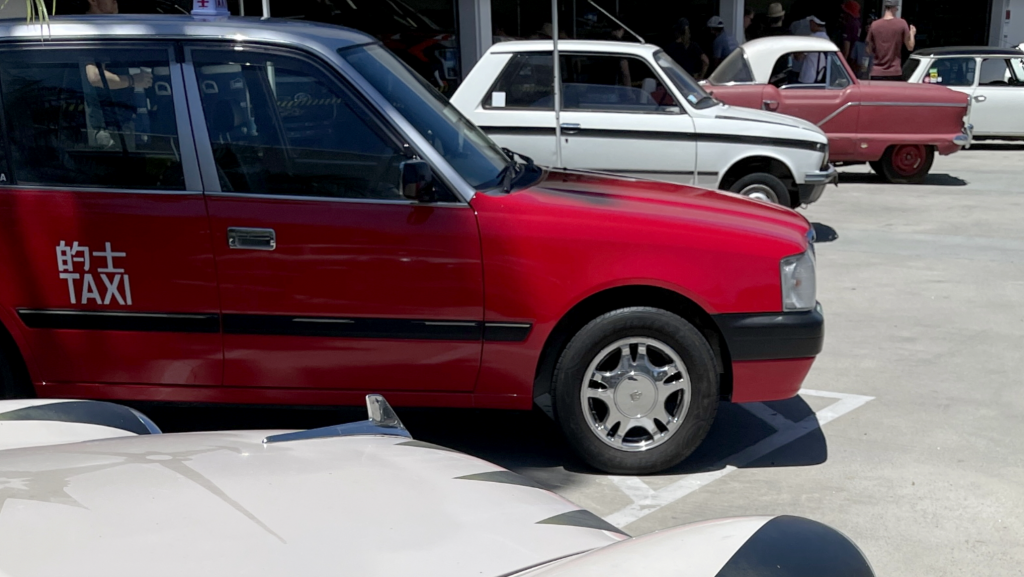 This was an unexpected treat: a Hong Kong-type Toyota Crown Comfort Taxi. This particular one came from Japan, but I think the owner said the livery is that of a Hong Kong taxi. It was in perfect shape, and is one of those cars that’s so mundane and normal-seeming that it wraps all the way around to being fascinating. 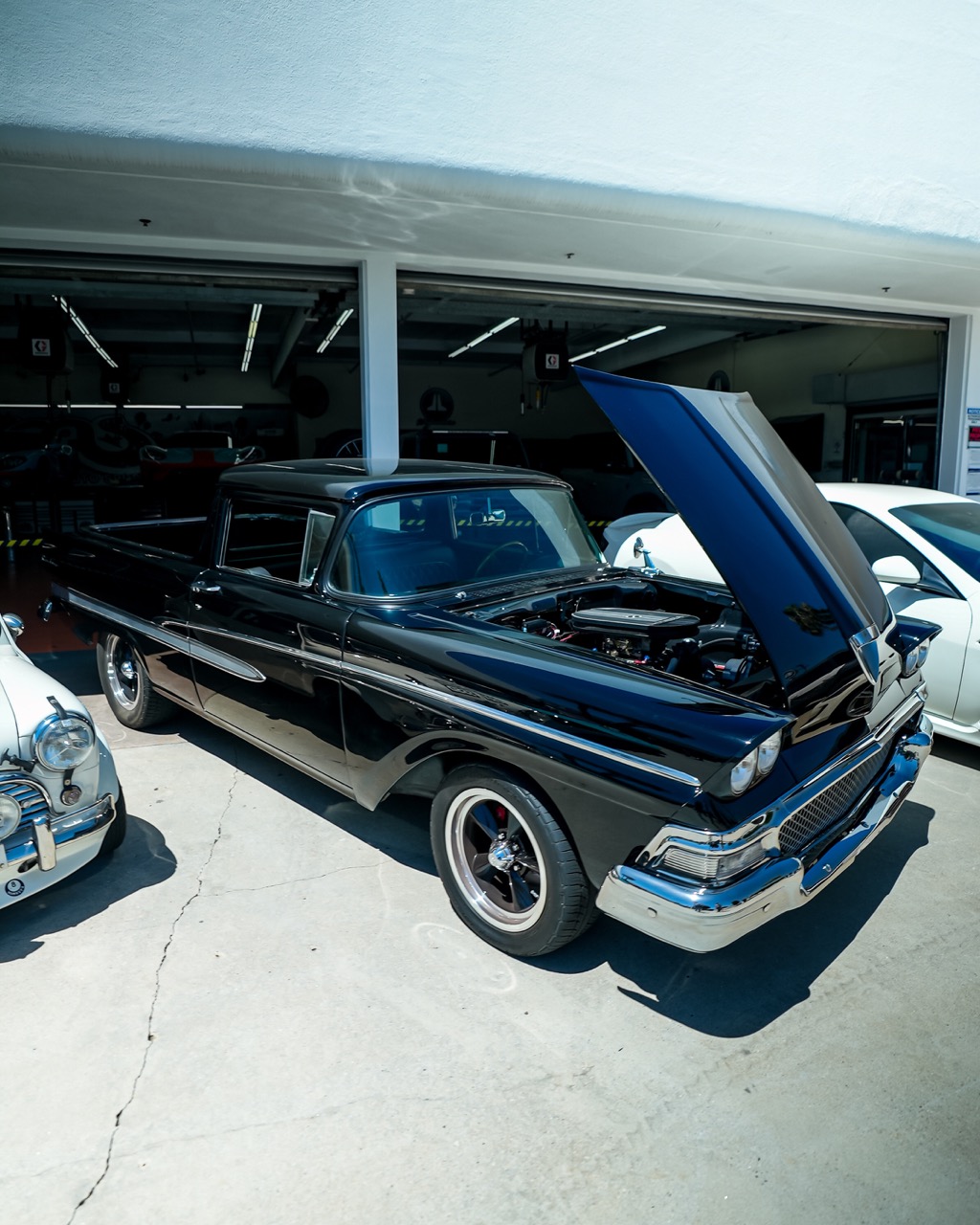 This late-’50s Ranchero was so menacing and cool I just gave it my wallet without it even having to ask. 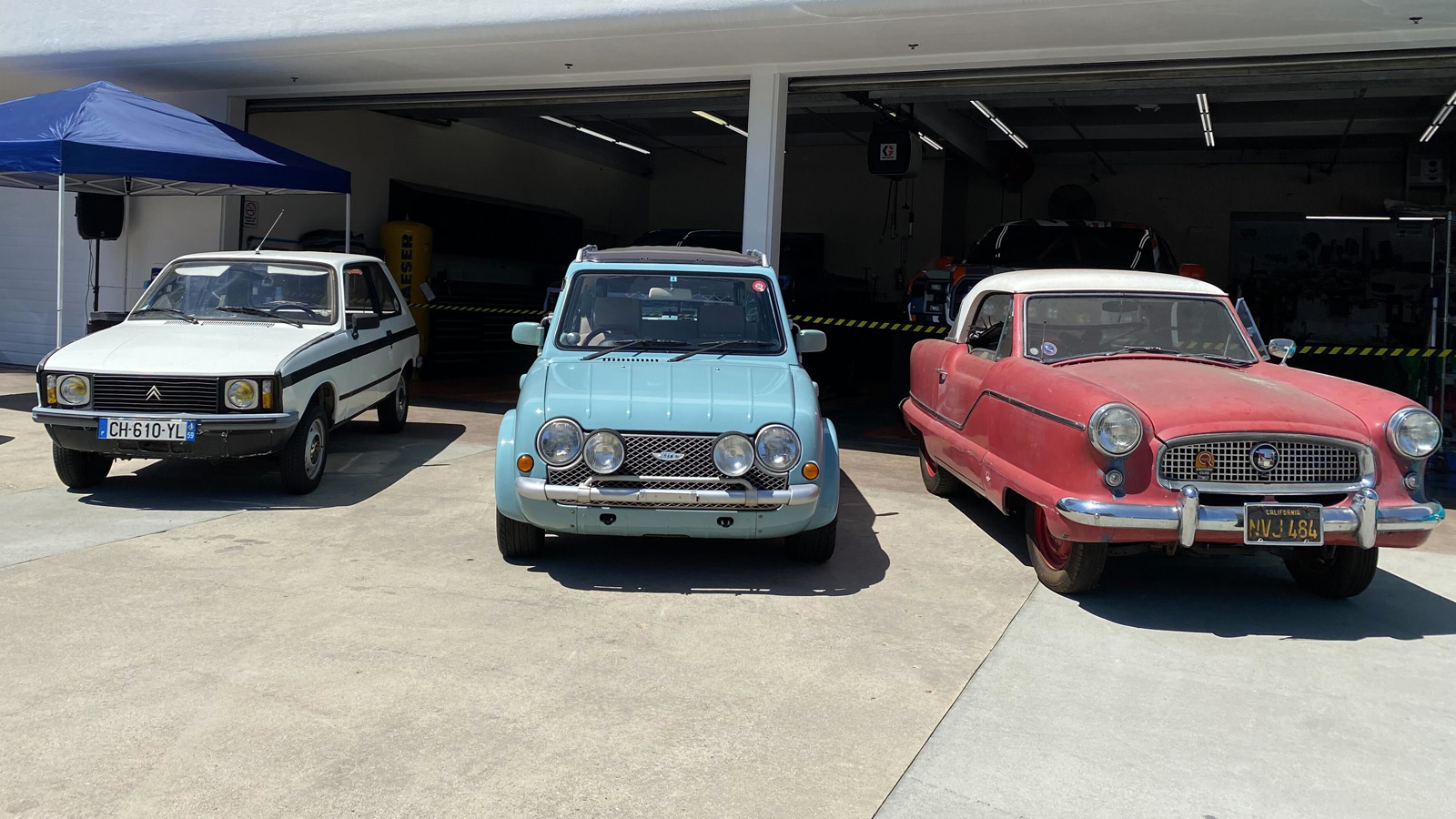 Look at this mighty triumvirate! Our pal Jonee’s Citroën LNA, Hanna Farah’s (as in Matt Farah’s wife) Nissan Pao, and our own David Tracy’s not-yet-running Nash Metropolitan. Jonee let me take the LNA for a spin and it was one of the best 34 horsepower experiences I’ve had, that Pao may be the nicest Pao I’ve ever seen – literally everything on that car is perfect, even all the rubber bits that look like masticated gum on mine —and Beau fooled David into thinking someone stole and slept in his Nash, which was hilarious.

[DT talking here: I’m beyond excited about my Nash. The interior is this amazing red and black Houndstooth, the body is way nicer than I expected, and as a daily driver I think this thing will just be epic around LA. -DT]. 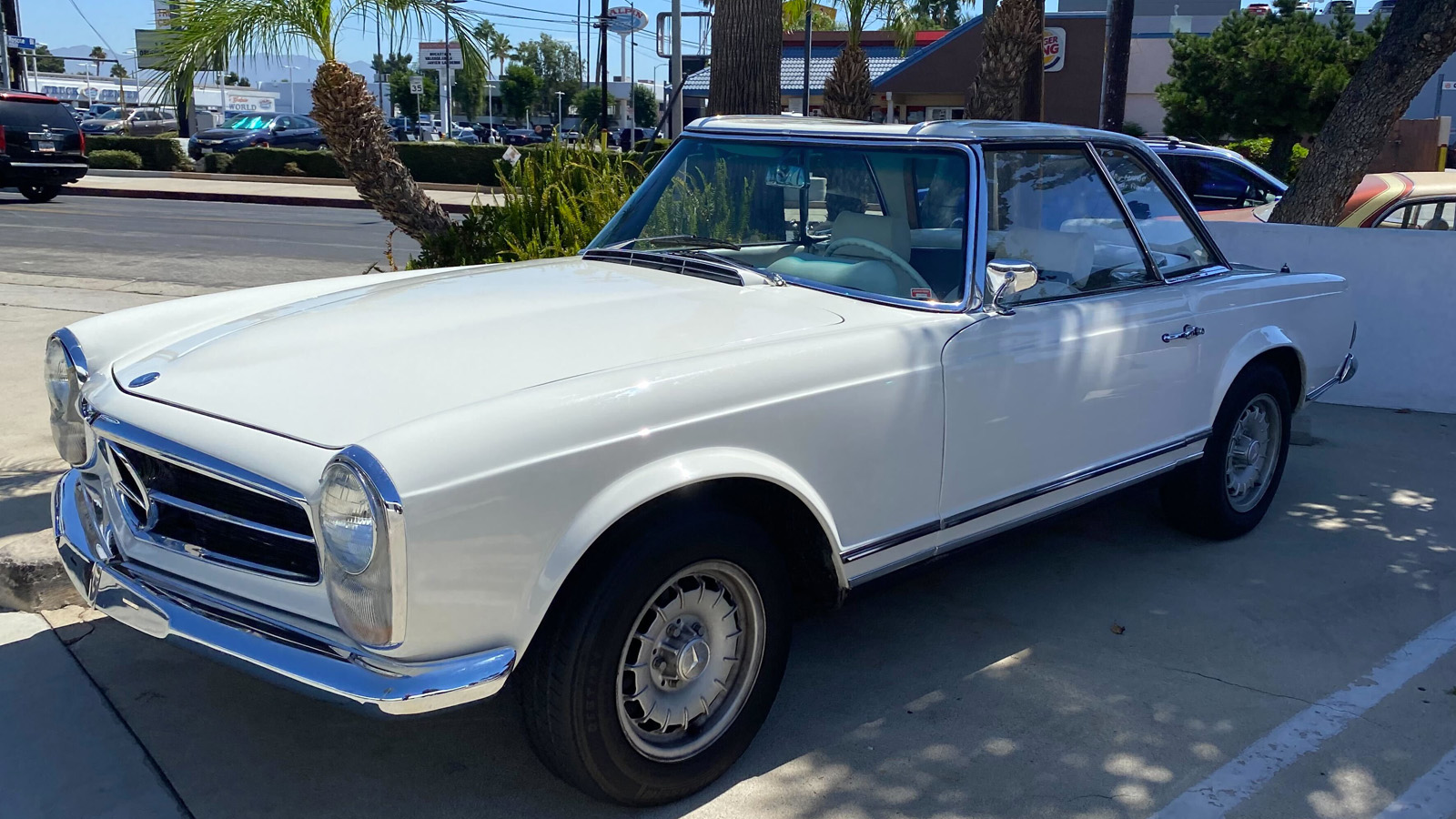 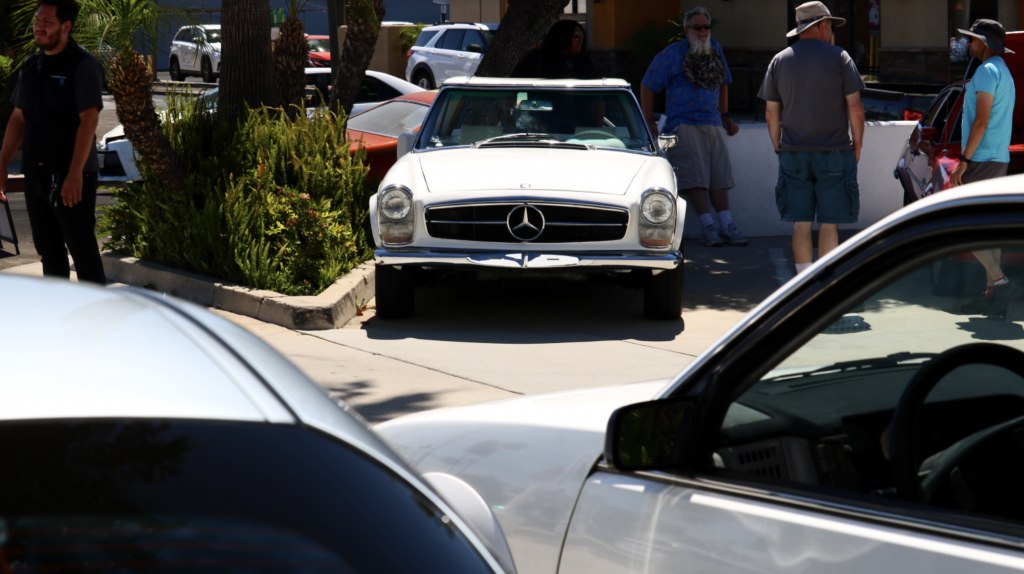 Have you thought about how lovely the Mercedes-Benz Pagodas are today? If not, then just look at this one, all elegant lines and impossibly thin pillars, and remember. 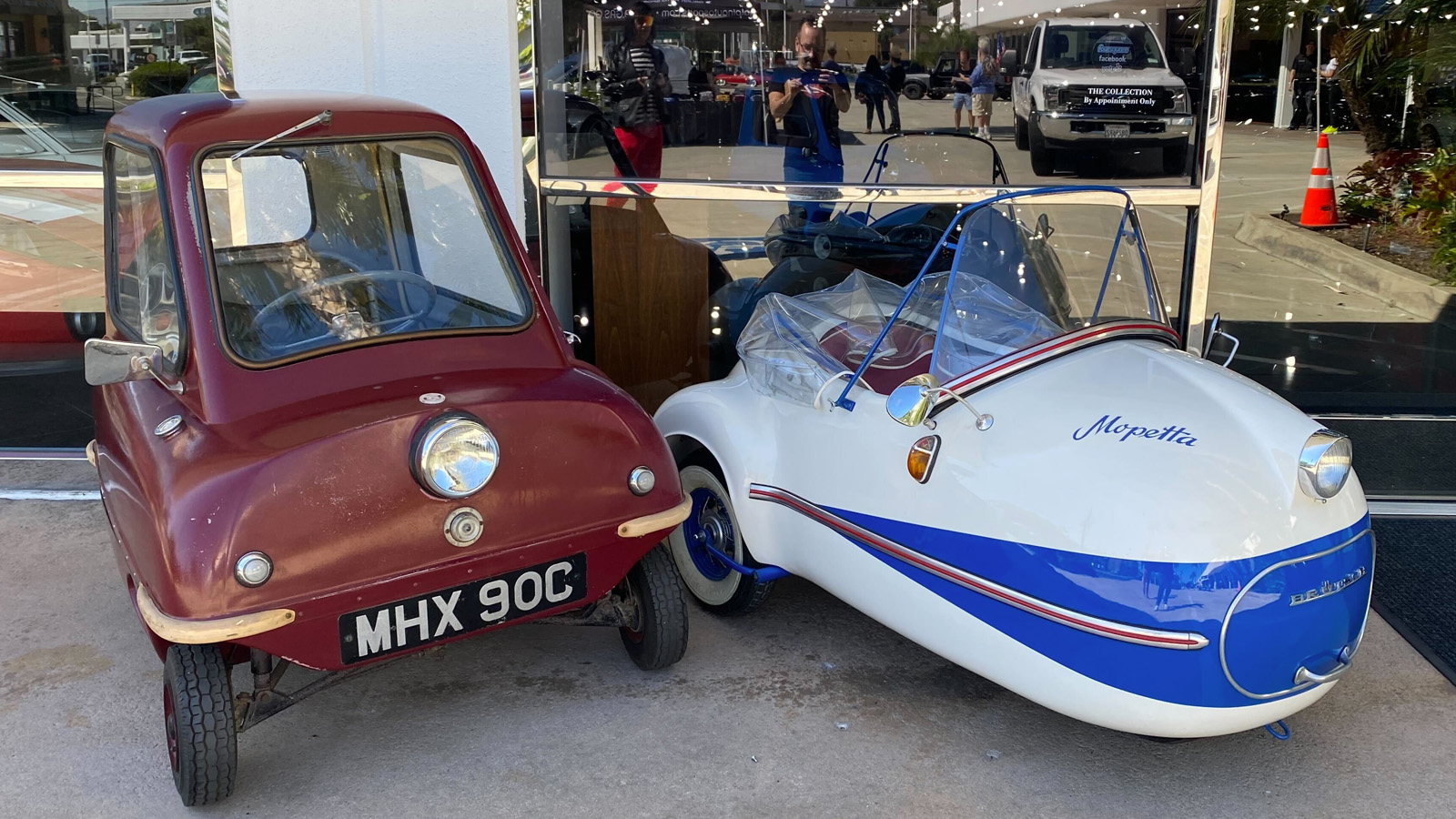 In addition to cars brought by local Autopians, our own co-founder Beau opened his collection for people to enjoy, which included some fantastic microcars, like these two smallest examples of that already diminutive category, a Peel P50 (probably the earliest one in existence!) and a Brütsch Mopetta, which is only one of 14. 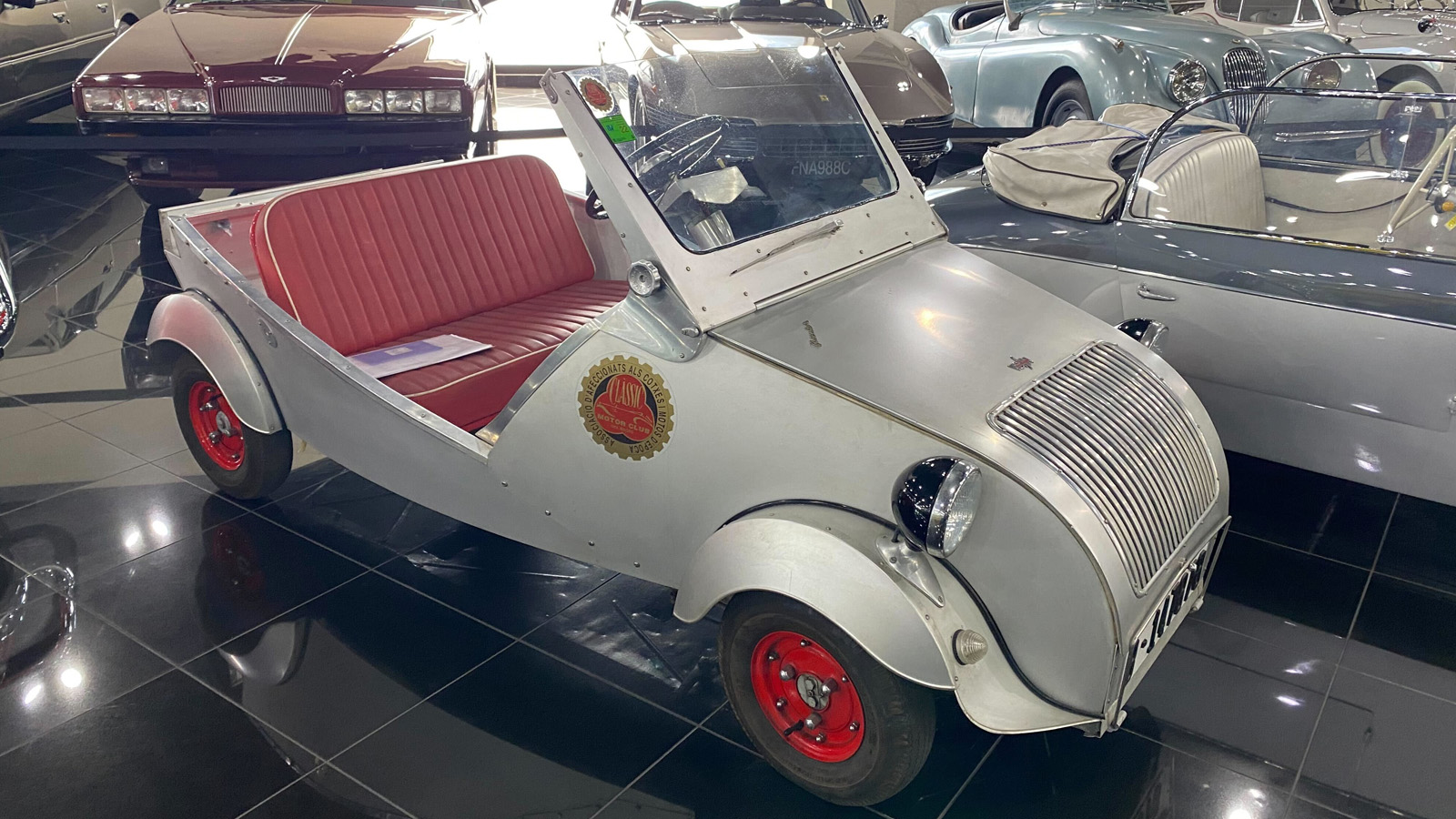 Beau recently acquired this Spanish Biscúter, a tiny peoples’ car designed by the legendary Gabriel Voisin. I’ll be covering this in much more detail soon, so stay tuned. 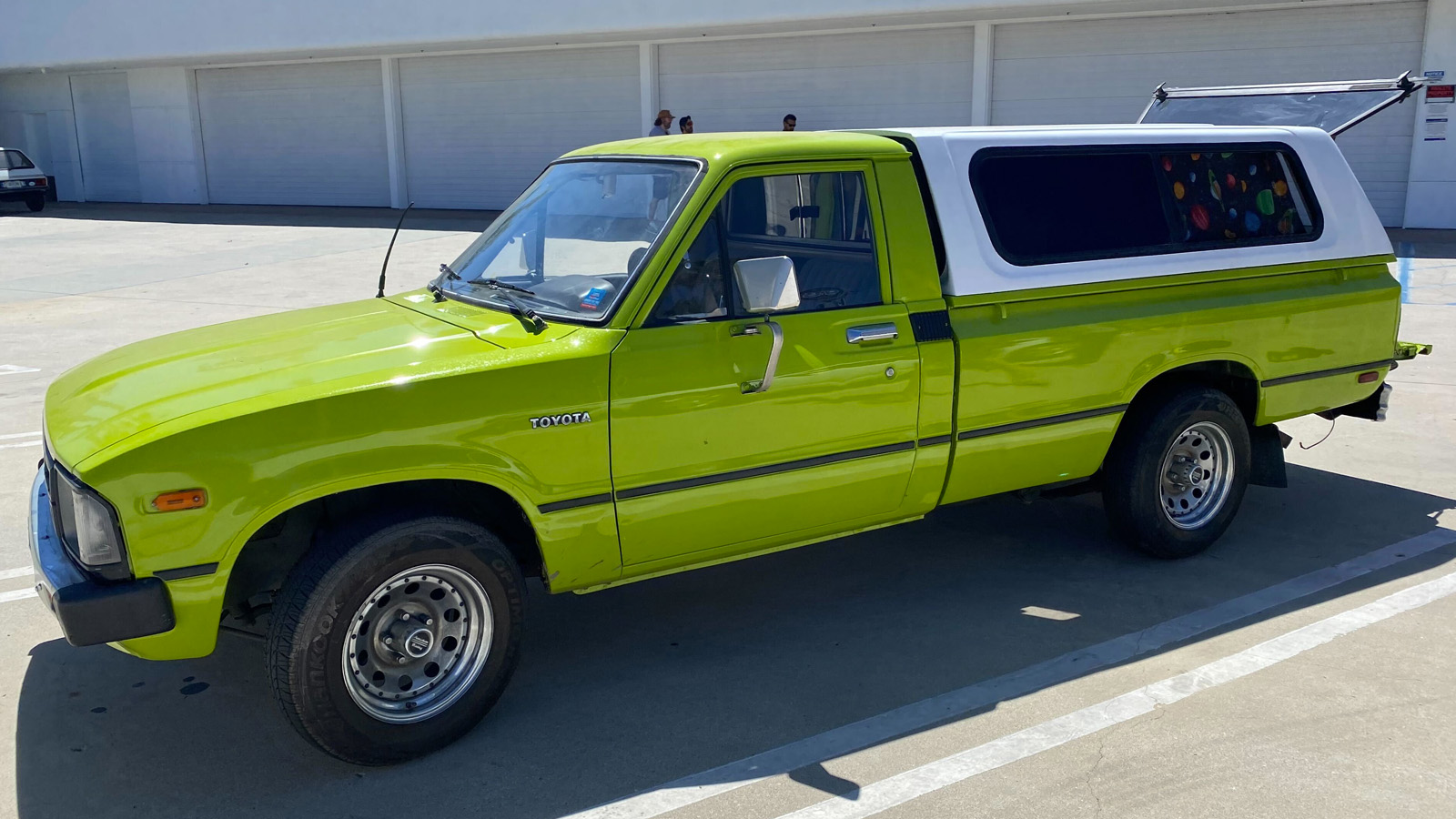 My friend Emily brought out her freshly-painted Toyota pickup, a car she grew up in and recently bought from her dad. Check out the planetary curtains she made for the camper top! 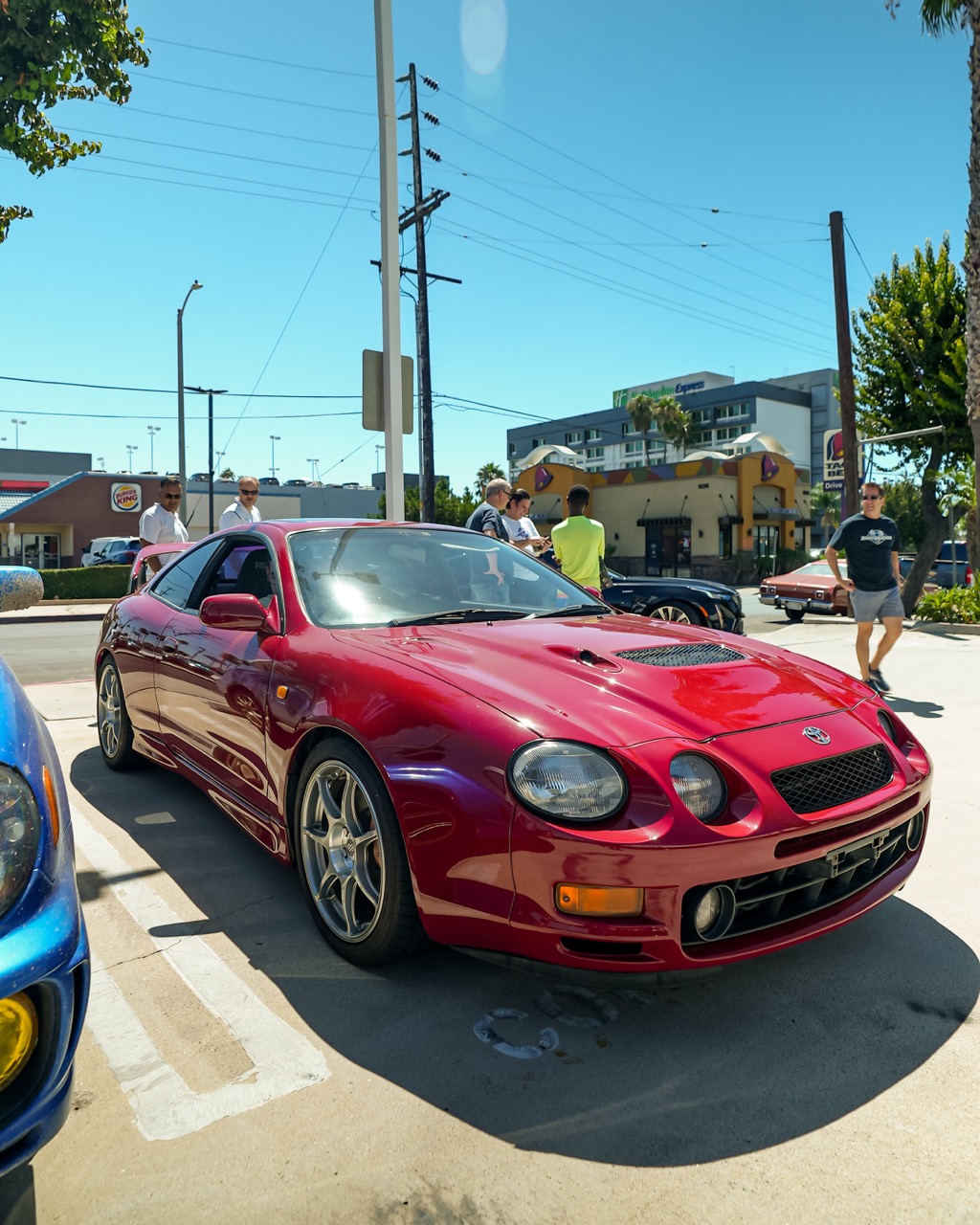 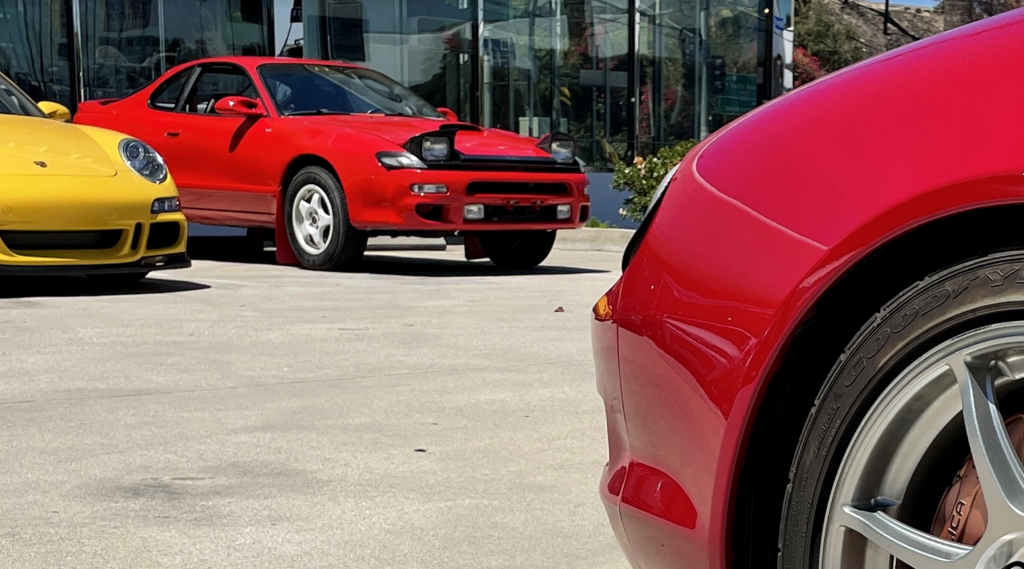 Los Angeles has always been home to many JDM cars, like this purposeful-looking Toyota Celica GT-Four (one of two at the event). Well, maybe it’s a replica of the GT-Four edition, of which only 2,500 homologation specials were made; I’m not qualified to tell for sure, but I sure liked seeing it person/car. 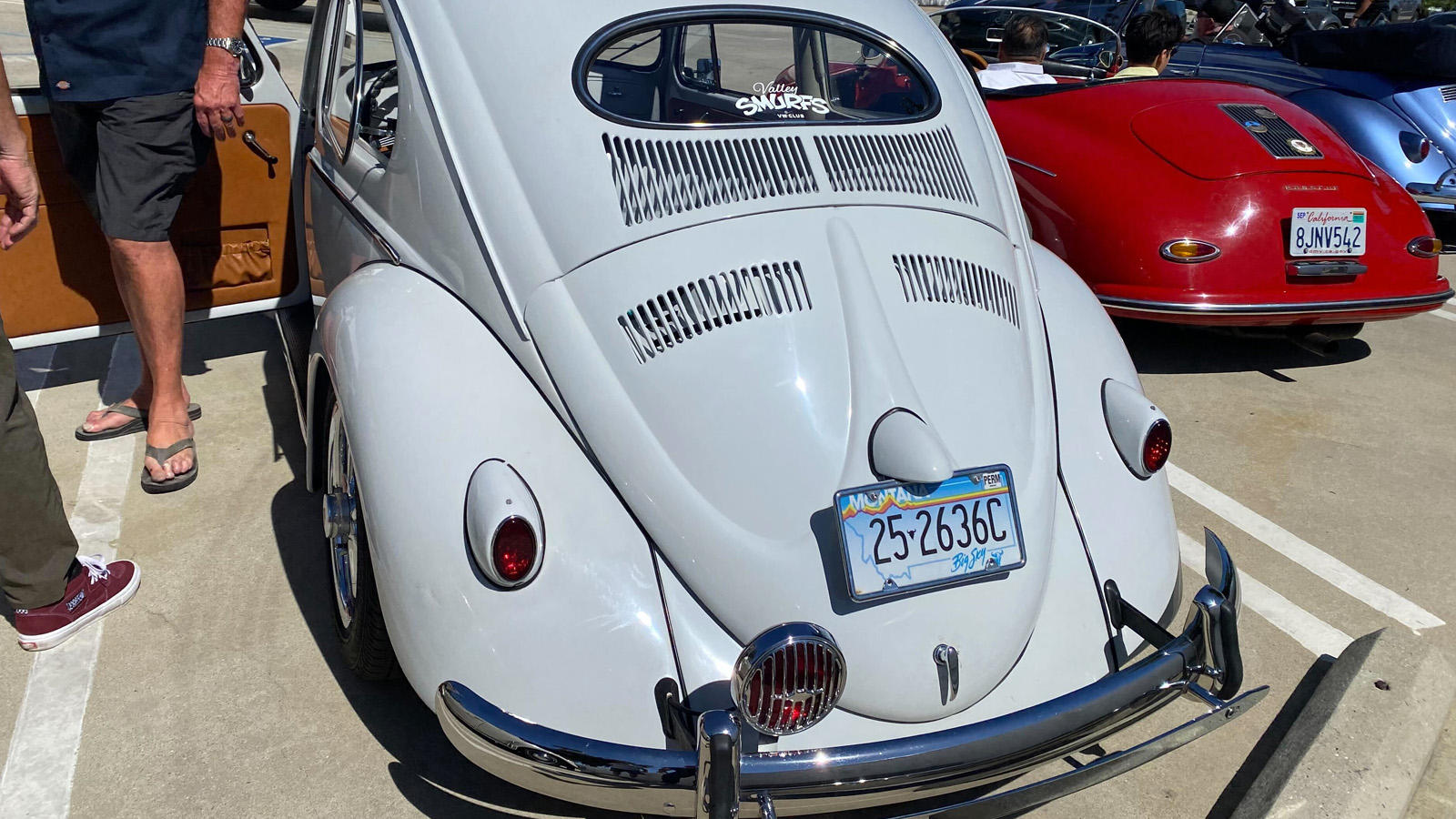 By the way, a bit of VW trivia: you can usually tell when an old Beetle has more going on under that decklid because bigger engines that demand more cooling and intake air will often be paired with engine lids from the convertible models, like this one here. Prior to 1970, only convertible Beetles had air intakes on the engine lid itself, and early ones, with their gracefully arching vent groups, are very desirable for bigger-engined sedans, like this one here. 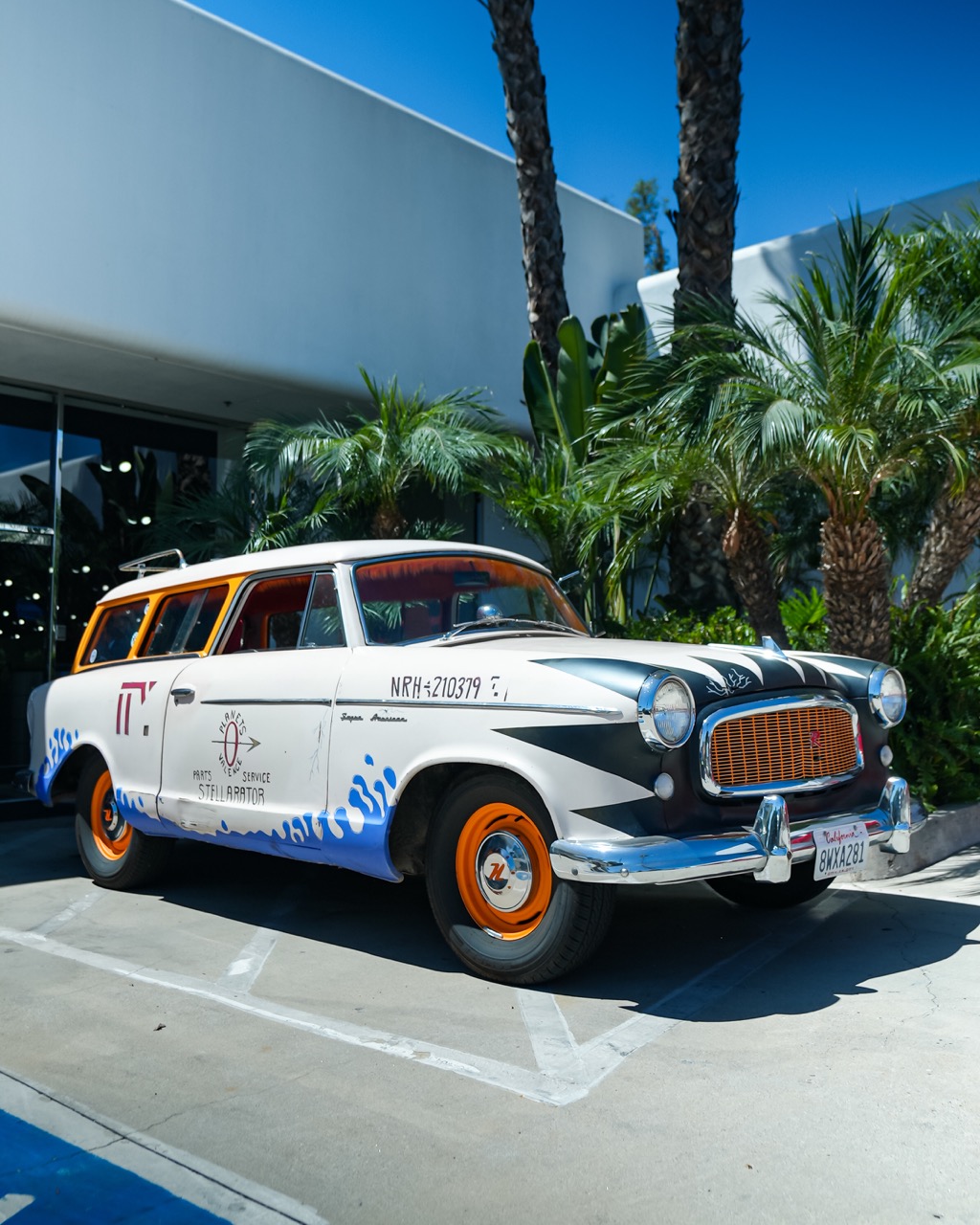 We’ll leave on an unobscured shot of my friend Tom Jennings’ wonderful 1960 Rambler American two-door wagon. This car is so well dialed-in that it drives like something modern. Plus, it has what I think is a genuine Muppet-fur headliner. Tom has documented this car extensively here, so if you have an afternoon to kill, take a dive in.

This is just a tiny selection of all the cars (and people) that showed up, and everyone at the Autopian is so proud and delighted to see the incredible turnout. You Autopians are why we do this, and why it seems to be working, and we appreciate it so damn much it makes us feel weird deep inside.

Thank you all! And see you at the next Autopian Meetup!

Rust-loving Jeep man, cofounder and EIC of The Autopian, Jason's friend. Email: david@autopian.com
Read All My Posts »
PrevPreviousIn A Massive Win For Enthusiasts Who Like Fixing Their Own Vehicles, A Hacker Has Jailbroken A John Deere Tractor
NextThe 2023 Dodge Hornet Is Here. The Electrified Version Gets A Tiny 1.3-Liter Engine And Makes A Ridiculous Amount Of TorqueNext