Moke International has announced that it’s bringing a famed classic back to America with modern propulsion. The Moke Californian signals the official return of the famed Mini Moke to America. And it’s not going to be some low-speed electric vehicle for golf courses; this will be able to be driven on regular roads.

The diminutive Mini Moke has been around since the late 1950s. Back then, Sir Alec Issigonis had been working on the idea of a vehicle built from Mini parts and topped with a utility body. The idea was a vehicle that British Motor Corporation could use to compete with Land Rover’s military vehicles. A prototype was presented in 1959, but its low ground clearance and 848cc engine resulted in it failing to pass inspection with the military. BMC kept ironing out the design, but in 1962 the company found out that the military still wasn’t interested. The Mini Moke would instead be released in 1964 as a civilian utility vehicle.

The little Moke rose to fame through television, music videos and movies. George Harrison and Paul McCartney of the Beatles had Mokes. Owners also include the Beach Boys and even Frank Sinatra, James Bond films had an affection for the Moke, with the little vehicle appearing in You Only Live Twice, Live and Let Die, The Spy Who Loved Me, and Moonraker. 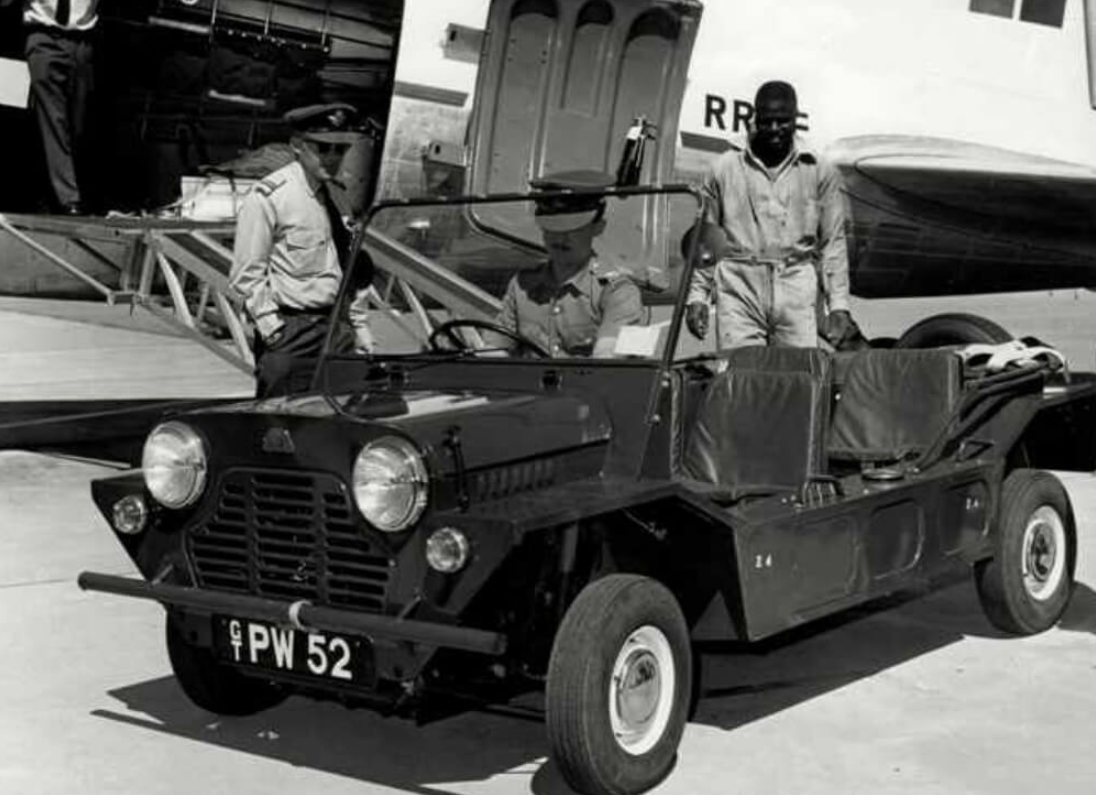 The Moke was more than just a star vehicle, as it was also loved by everyday people, too. Mokes became farm vehicles, off-roaders, and beach cruisers. The original left America in 1982 before dying off entirely in 1993. Luckily the cruiser was brought back to life in 2012 with the help of China’s Chery Automotive and subsidiary Sicar Engineering. The resulting Moke International is said to hold the trademark to the original Moke as well as 100 other Moke marks. The company also manufactures the vehicles in the UK.

It has been building Mokes for some time, but now it’s ready to come back to America. And it wants to do it with the Moke Californian. [Editor’s Note: I’m guessing this could be legal under the Low Volume Replica Vehicle Manufacturer’s Act because these things sure as hell aren’t passing any crash test that doesn’t involve a sofa – JT] 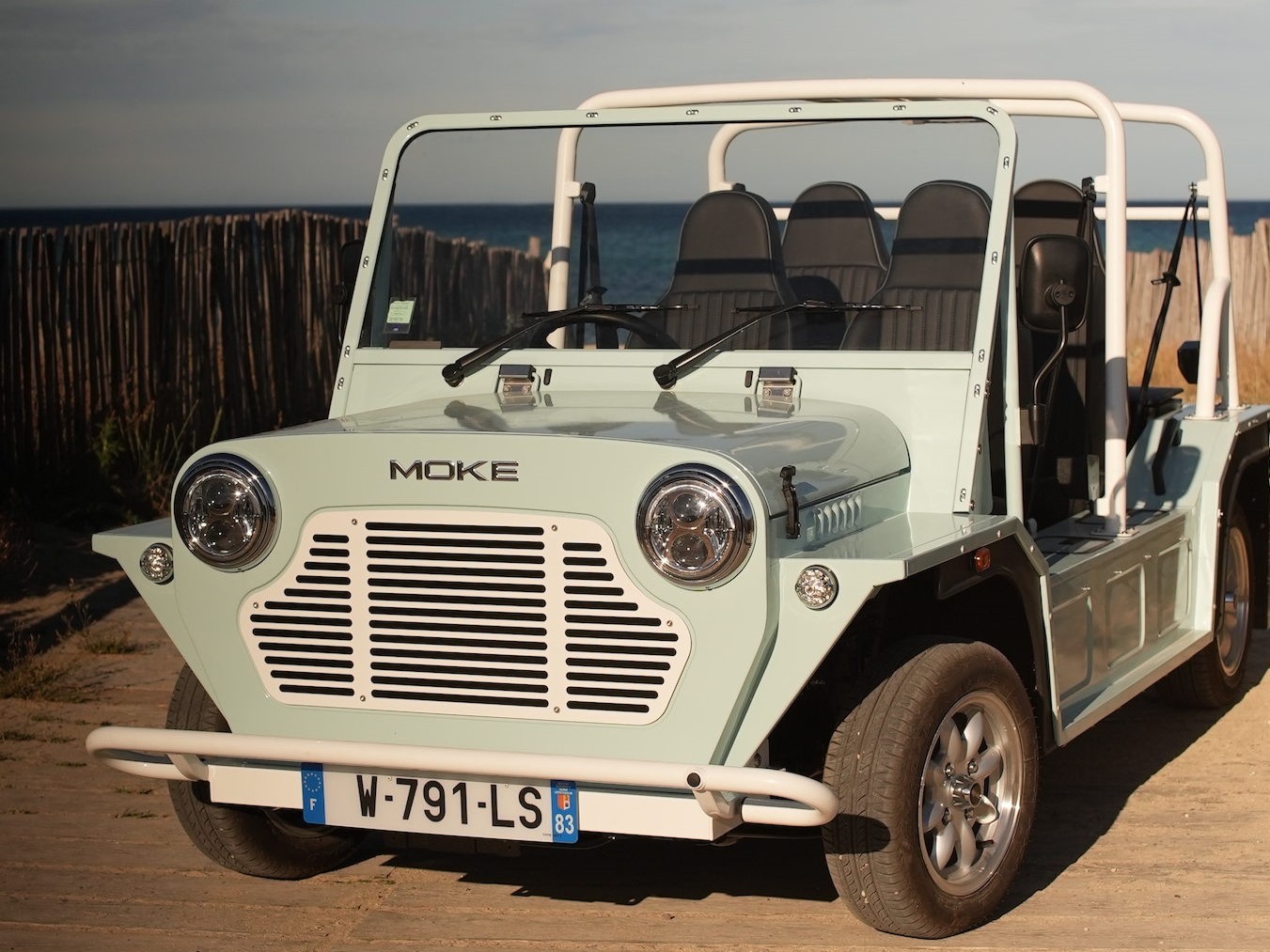 Moke International says that the original vehicle came in tons of different versions, but it thinks the most exciting and desirable of them was the Moke Californian. Sold for just a short five years between 1977 and 1982, it featured a few design changes that Moke says made it popular with fashion types.

This new Moke Californian looks old-school, but has some modern equipment under the skin. A 44 HP motor drives the rear wheels, which moves the less than 1,763-pound buggy to a top speed of 50 mph. Performance is described as zero to 34 mph in 4.3 seconds. 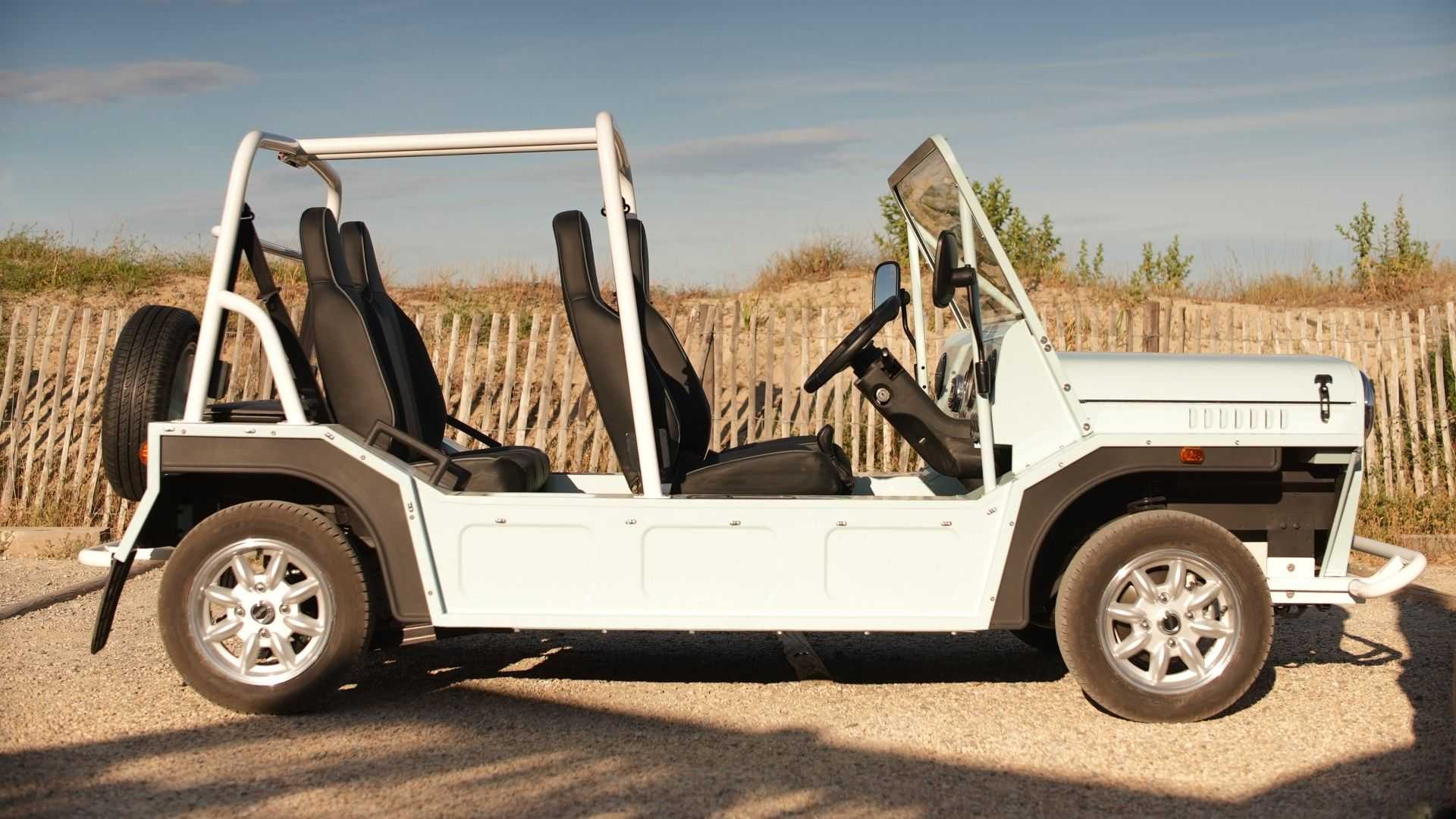 A lithium-ion battery of unspecified capacity is advertised to get the Moke 74.5 miles of range on the WLTP cycle. Of course, with a top speed that low, it’s just barely legal to drive on some highways. But it does mean that you can take it down regular roads. This is unlike LSVs, which are limited to roads not much faster than their 25 mph top speeds.

You get to drive the things from a helm featuring retro-style gauges and in seats with three-point belts. Those seats are waterproof, as are the vehicle’s speakers. Occupants can be protected from the weather either with a soft top or with a canopy with doors. 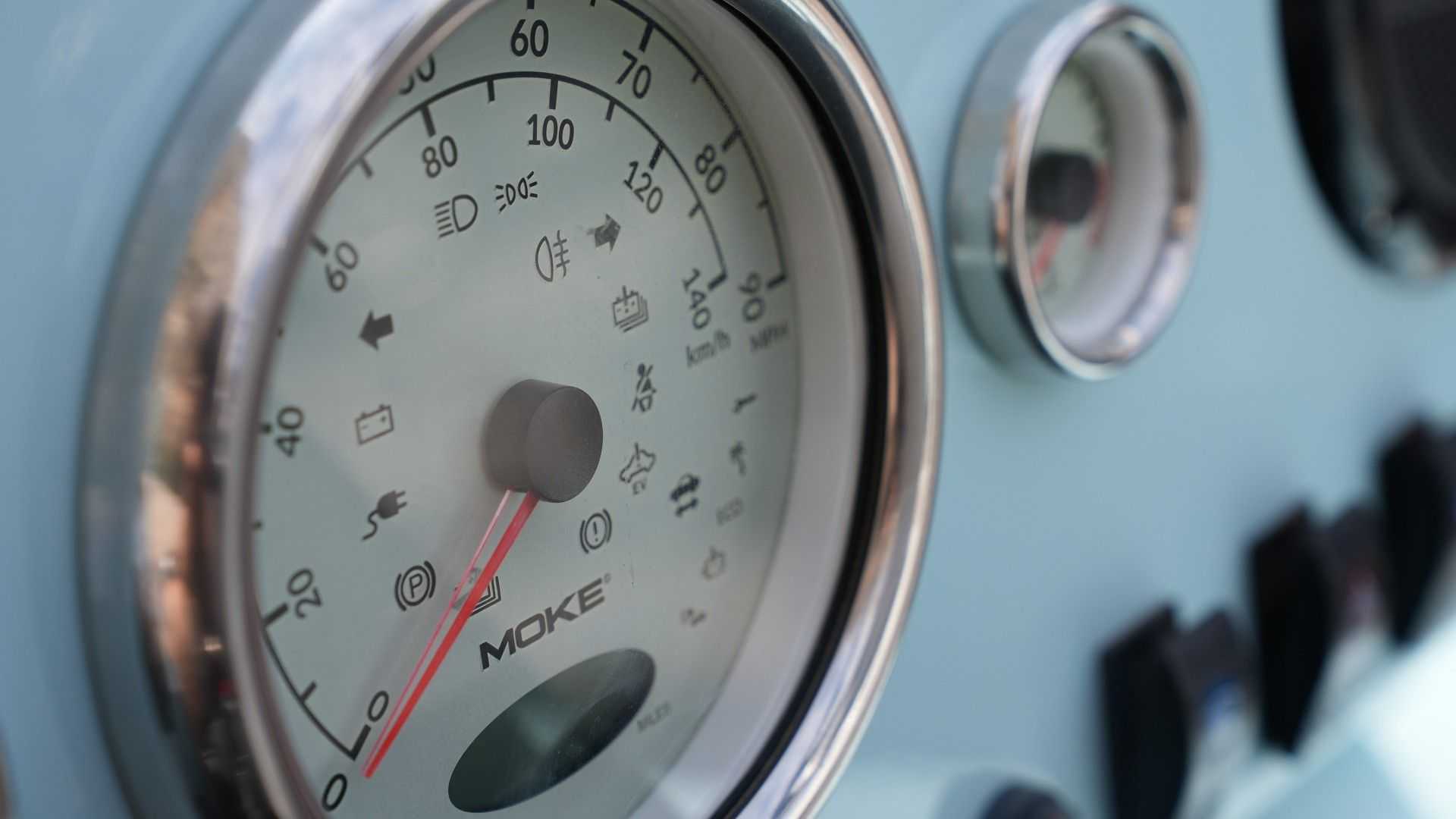 If you’re scratching your head right now, thinking that I’ve been living under a rock, I’ll explain. You can buy a Moke right now in America from a company called Moke America. The company is known for releasing James Bond editions of its 25 mph-capped low-speed vehicle Mokes. So if you can already buy one in America, what’s with the “back to America” thing?

Moke America is appealing the decision, and Moke International filed a countersuit, alleging that aforementioned trademark infringement. The case is over two years old with the next court date in January 2023. 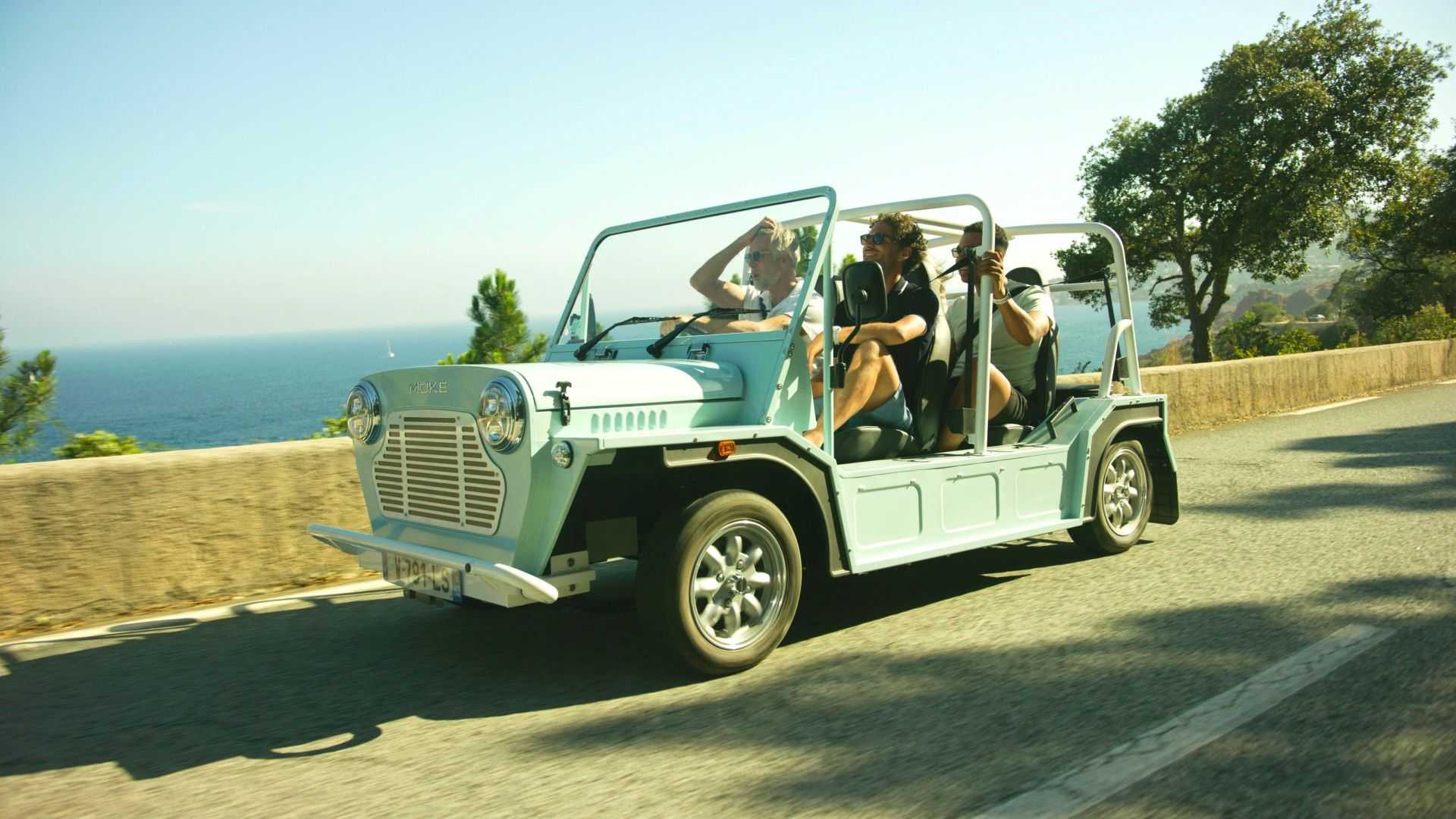 Regardless of who owns what, I think what’s really cool is that fans of these little guys are soon to have another option in the marketplace. And, even better, the new Californian could be used for more than just a toy.

As of right now, Moke International hasn’t announced pricing or a release date, but the company sells Mokes in the UK for £29,150, or about $32,990. Further details are expected in the coming weeks.

Mercedes is a lifelong fan of all things powered by an engine. When she isn't driving one of her five Smart Fortwos or her 14 other vehicles she could be found in the cockpit of a Cessna 172 or perhaps swimming in any body of water that she could find. She also has a deep love for buses of all kinds. Please send her buses. mercedes@theautopian.com Instagram: @mistymotors Twitter: @Miss_Mercedes30 Facebook.com/neonspinnazz
Read All My Posts »
PrevPreviousPlasma Cutters, Welders, Huge Spiders: My Hail Mary Attempt To Fix An Impossibly Broken $900 Ute In Australia Begins
NextThe Little e.Wave X Is Exactly The Kind of Fun Small EV We Need So I Probably Shouldn’t Get My Hopes UpNext