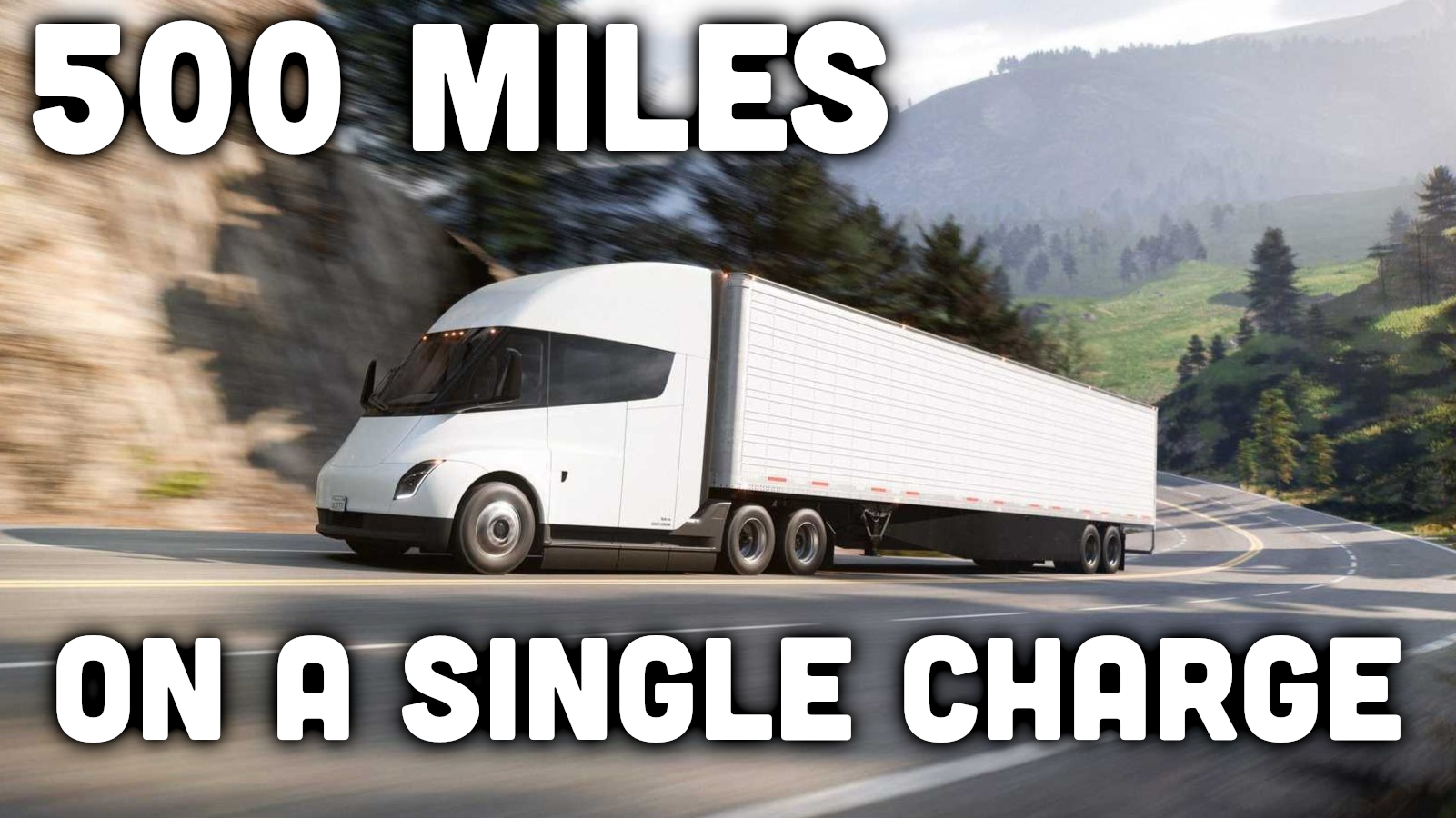 Tonight, Elon Musk kicked off the Tesla Semi truck delivery event at its Nevada factory. After years of waiting, Tesla Semi trucks are actually reaching customer hands, and at least on paper, these trucks seem pretty smart. They have the power to accelerate 82,000 pounds up a 6 percent mountain grade and apparently enough range to deliver a load 500 miles away. Let’s check this big rig out.

Just over five years ago (which feels like it’s been a decade, I know) Tesla unveiled its idea for a semi truck of the future. The Tesla Semi promised to revolutionize the trucking industry with an EV semi capable of hauling a full load 500 miles on a single charge. Development of the Semi has been a rollercoaster. Back in 2018, Musk said that the Semi would have four Model 3 motors and release in 2019. That year came and went without a Tesla Semi, with Musk saying that it would release in 2020. Then, the release date of 2020 became 2021, then 2023 was even hinted at as the release. Along the way. Tesla said, at least in an earnings report, that the delays were due to a limited supply of batteries and the supply chain shortage.

But now, it seems that Tesla has pulled it off, so what are truckers getting with a Tesla Semi?

The Meat And Potatoes

Tesla’s Semi delivery event both answered a lot of questions and frustratingly left a lot completely unanswered. I’ll start with what you’re not about to learn here. Elon did not reveal how much the Tesla Semi weighs. He also did not reveal its actual horsepower, torque numbers, price, or battery capacity. But don’t fret, because Elon did reveal some pretty sweet details.

The biggest one, I think, is its range. Recently, Elon Musk Tweeted that a Semi loaded to 81,000 pounds completed a 500-mile drive. Musk didn’t indicate how many times the truck had to be charged for the trip. But at the event, he clarified that the truck went the whole distance on a single charge. And as proof, he brought a timelapse of the truck doing the whole trip.

Even then, it seemed unbelievable. Freightliner, an established player in the semi truck space, has its eCascadia, which will do 230 miles at best with its 438 kWh battery. Volvo’s VNR Electric can go 275 miles with its 565 kWh battery. The Nikola Tre BEV claims up to 330 miles from its 733 kWh battery. And the rest of the competition doesn’t even come close.

So how did Tesla beat the competition so hard? Musk gave a hint when he said that the truck worked out to just less than 2 kWh/mi on the 500-mile drive. Based on that, our contributing engineer Huibert Mees said:

And, he may be onto something. While Musk did not reveal the batteries, he did reveal other details. The Semi is a parts-bin special. Musk says that it uses inverters, drive units, power electronics, HVAC, and infotainment from other Tesla models. For example, the drive units are said to be “essentially” the same units from Tesla’s Model S and X Plaid cars. 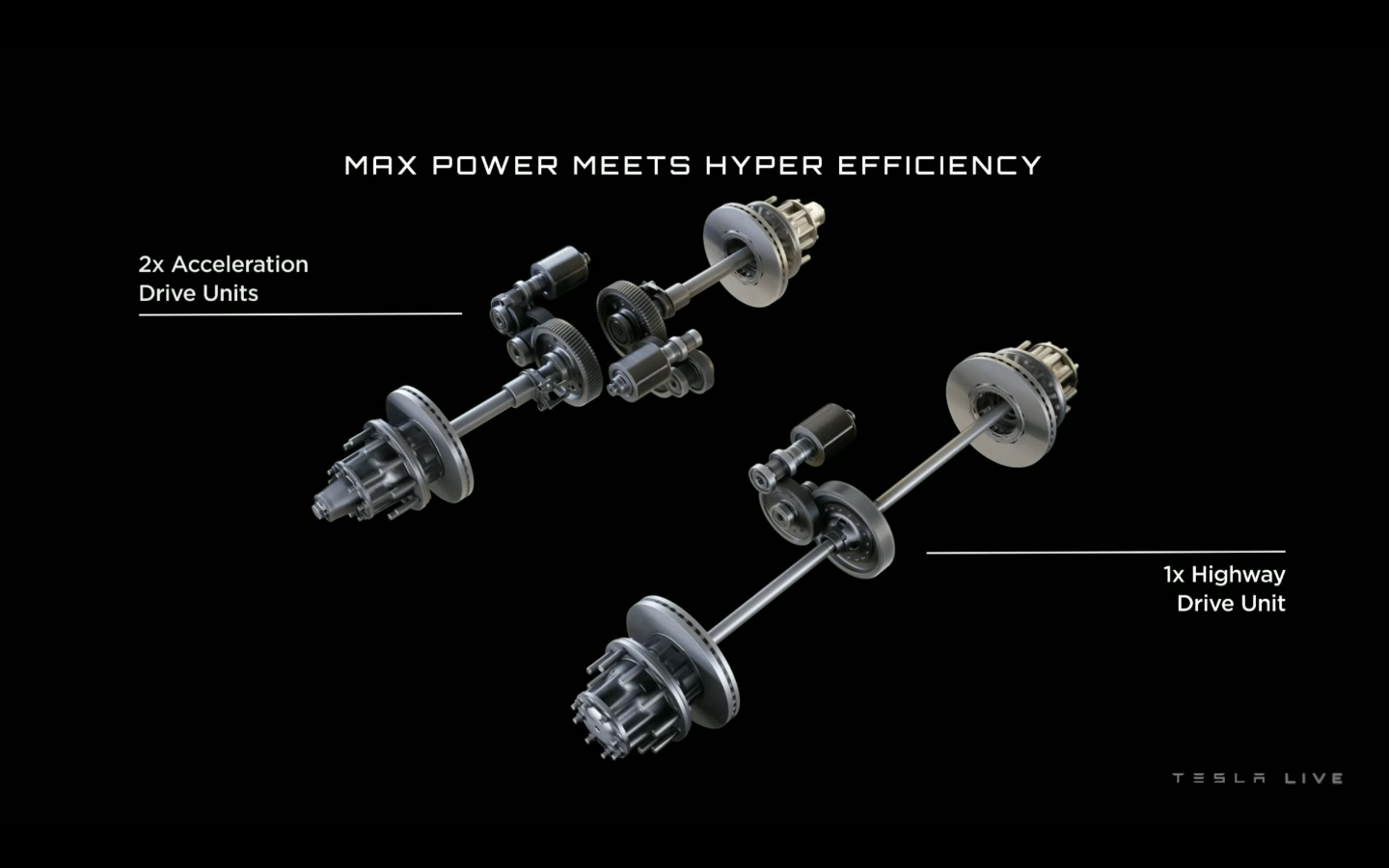 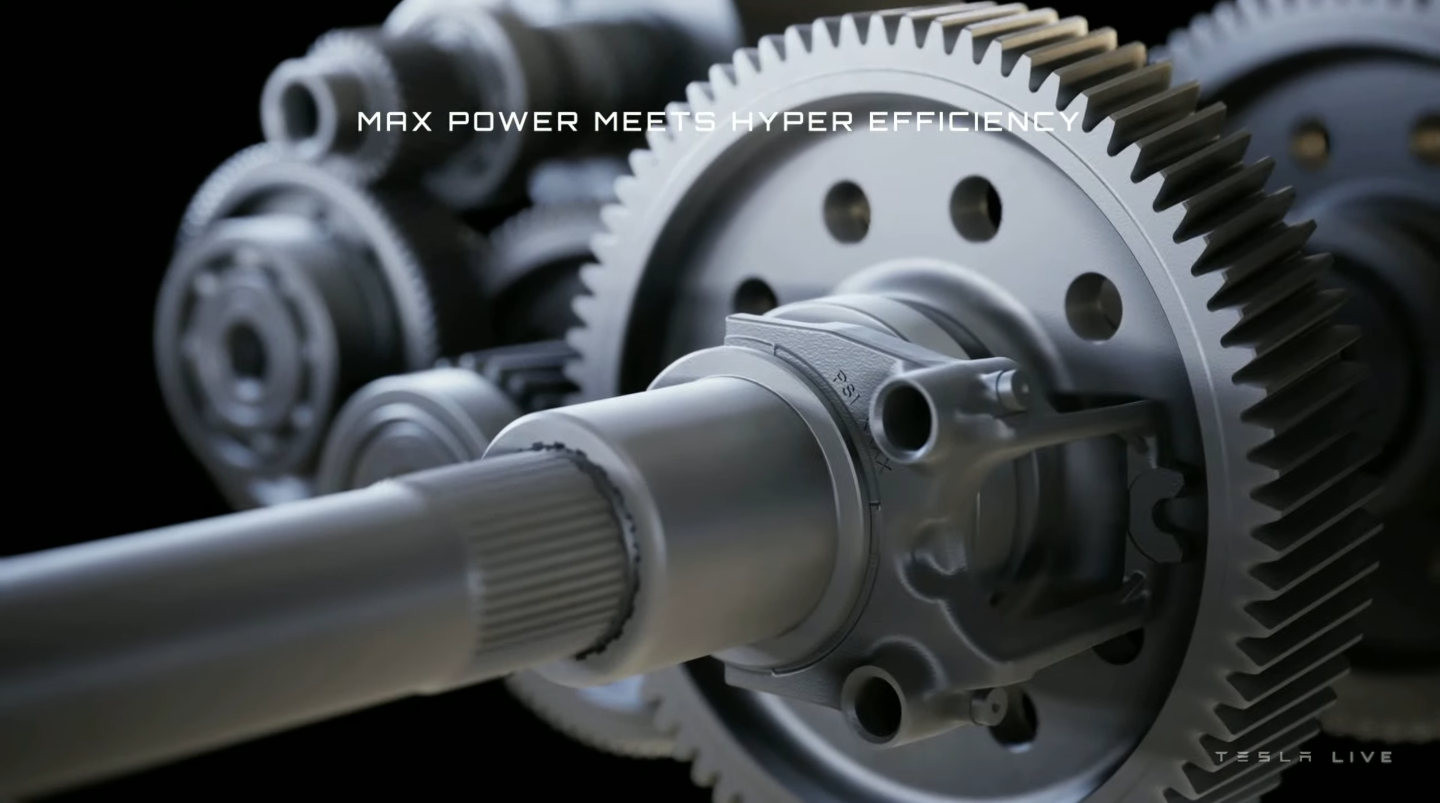 Elaborating further, Musk says that the Semi uses the three Plaid motors. This is one fewer motor from the proposal to power the Semi using Model 3 motors. However, using the more powerful Plaid motors apparently means no range or power loss compared to using four Model 3 motors. Musk went on to say that in the Semi, one motor is always running. However, when more torque is needed for climbing or when more acceleration is needed for passing, the two additional motors have an automatic clutch system to seamlessly integrate into the action. This configuration is said to give power when it’s needed and low consumption when you’re cruising.

One thing that confused me about this is when Musk said that just one of the football-sized Plaid motors is more powerful than a diesel semi engine. Assuming that the Semi is making the same amount of power as a Plaid, it’s making 1,020 horsepower. Class 8 semis commonly run 400 HP to 600 HP or more depending on configuration. Heck, you can buy RVs that make 605 HP. So, that claim doesn’t currently check out unless there’s more power.

On that note, Musk says that loaded, this thing can hit 60 mph in 20 seconds, and there’s enough power to accelerate up mountains. 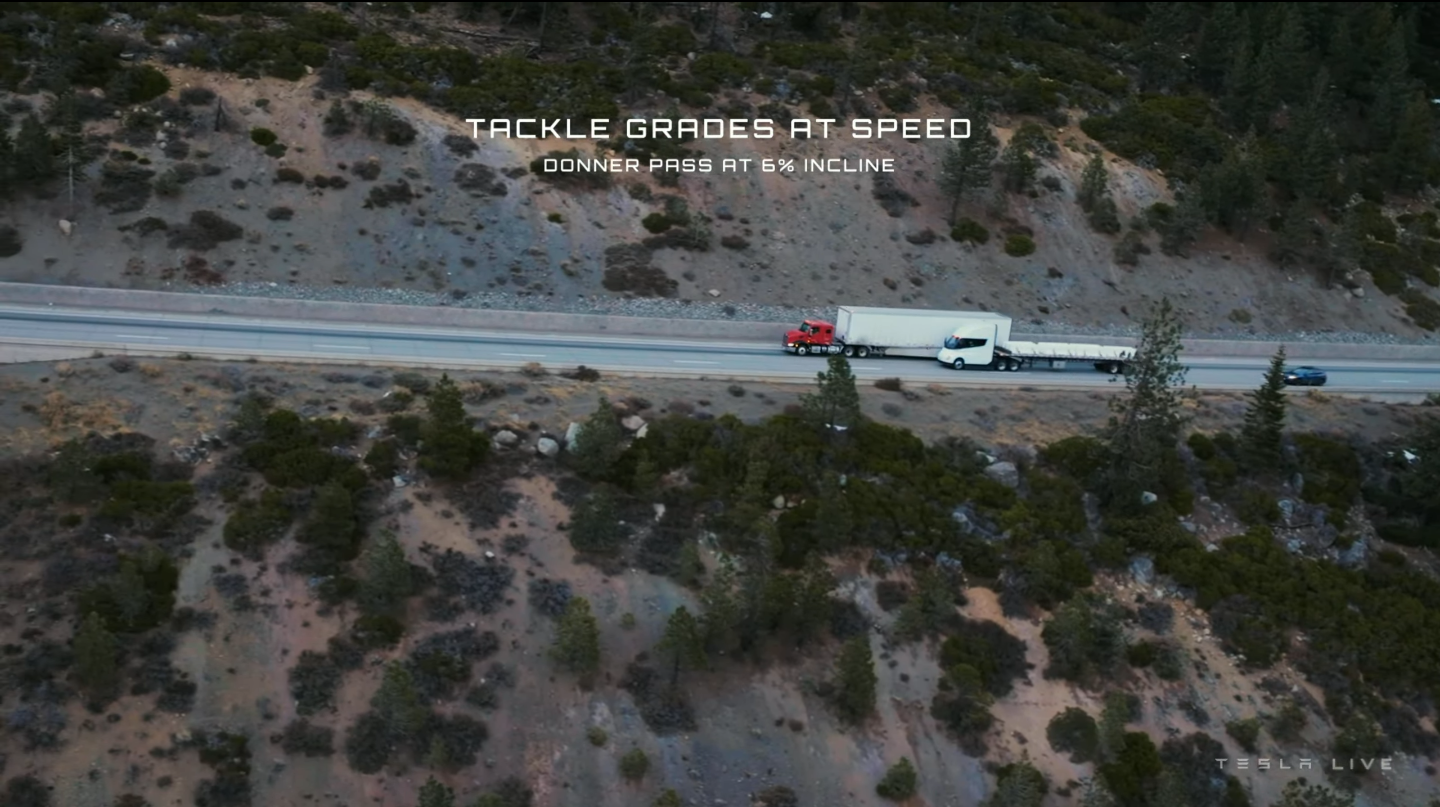 The Semi is running on 1,000 Volt architecture. To charge the beast, Musk says that Tesla developed a liquid-cooled charging connector capable of delivering 1 megawatt of power. Apparently, it will be good enough to charge whatever battery is in the Semi to 70 percent in just 30 minutes. This architecture, Musk said, will make its way down to the Cybertruck. It also has a traction control system to prevent jackknifing and a regen system so strong that Musk says that the Semi can go down a mountain without its driver needing to touch the brakes.

There’s Other Good Stuff, Too

Alright, so Musk didn’t reveal the Semi’s price, weight, horsepower, or other important stuff. But there were more goodies revealed in the event.

For one thing, since there’s no diesel engine in the way, Tesla was able to give the Semi a bigger cab. Despite its looks, this is a day cab. However, this is a day cab that’s big and tall enough for a driver to stand inside of it. Senior Manager of Semi Truck Engineering Dan Priestley said that you’ll be able to do stuff in the safety of the cab like get dressed. And there’s ample room to store tools. 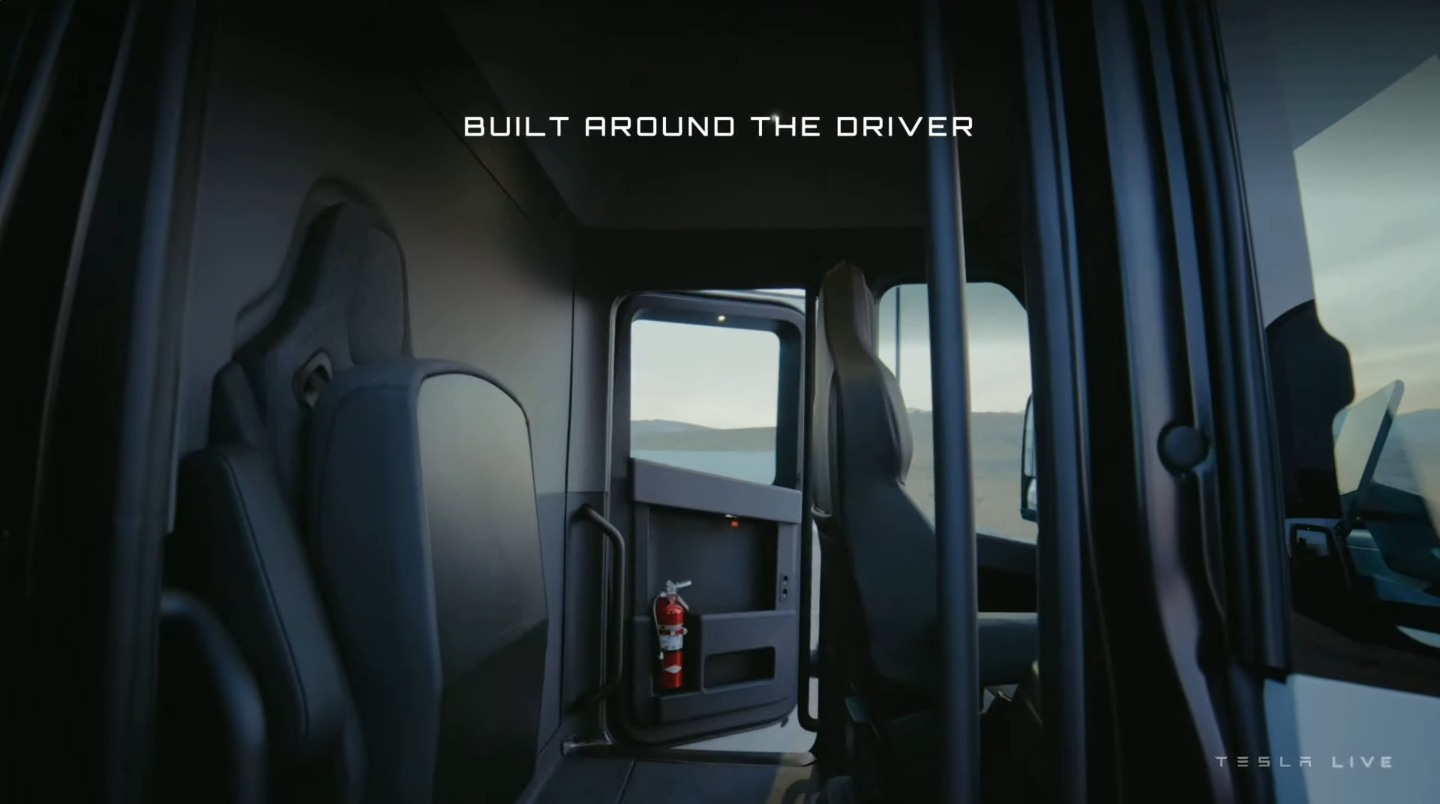 Priestley also noted convenience features like a suspension drop to make hooking up to a trailer easier and an automatic light test to make sure your lights are working. These features, Priestley says, are to make driving the Semi really easy.

And for Tesla, the Semi helps it achieve its mission of pushing sustainable energy. Citing a 2021 Tesla report, Musk said that Class 8 trucks make up just 1 percent of all vehicles in the United States. However, the report continues, they contribute to 20 percent of U.S. vehicle emissions and 36 percent of U.S. vehicle particulate matter. Musk wants to combat this by putting 50,000 Semis on the road in North America. And yes, this graphic seems to hint that there may be a Tesla robotaxi concept in the future? 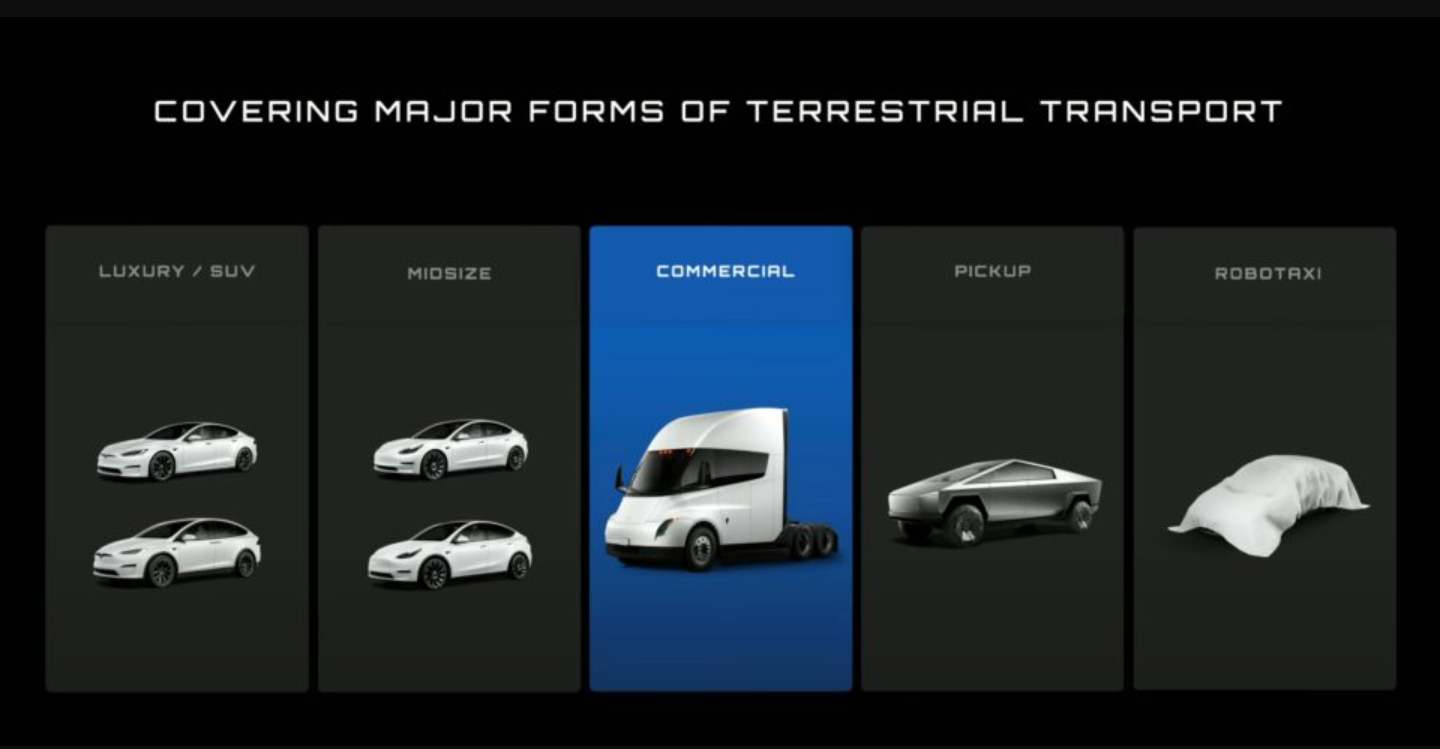 At any rate, the Semi is finally hitting the road with customers. The first deliveries went out to PepsiCo, and a Pepsi-branded truck made an appearance at the event. Pepsi’s Frito-Lay division also completed its first cargo run. As more Semis roll out, Tesla says that it will use the Semi for its own operations between suppliers and factories.

Thus far, things sound good, but we really want to know more about how much it weighs with those undisclosed batteries. How much the Semi weighs will end up determining how much of the 82,000 pounds allotted to electric semis will actually be used for cargo. And the price may determine how close Tesla will get to hitting its production goals.

[Correction: An earlier version of this story said that Musk was accompanied by Tesla Chief Designer Franz von Holzhausen. He was accompanied by Senior Manager of Semi Truck Engineering Dan Priestley. We regret the error and thank you, readers!] 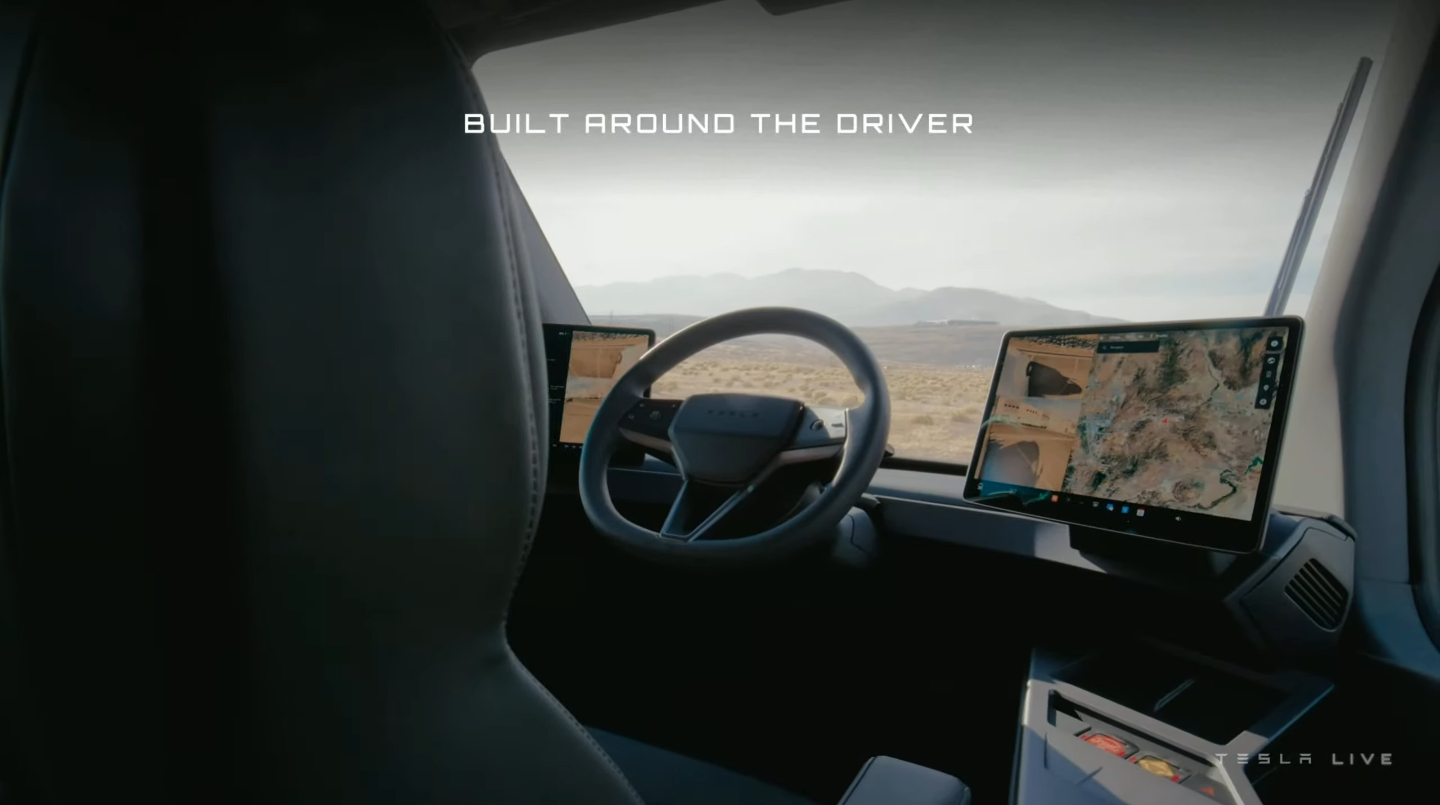 Mercedes is a lifelong fan of all things powered by an engine. When she isn't driving one of her five Smart Fortwos or her 14 other vehicles she could be found in the cockpit of a Cessna 172 or perhaps swimming in any body of water that she could find. She also has a deep love for buses of all kinds. Please send her buses. mercedes@theautopian.com Instagram: @mistymotors Twitter: @Miss_Mercedes30 Facebook.com/neonspinnazz
Read All My Posts »
PrevPreviousEveryone’s Completely Baffled By The Cringey Voiceovers In Lamborghini’s ‘Huracán Sterrato’ Off-Road Videos
NextA Corvair’s Worth Of Apples: Cold StartNext