If you’ve been an internet user at all in the past month or more, chances are you’ve run into some drama regarding Twitter and Tesla CEO Elon Musk. If you’ve read our work for long enough, perhaps you’ve even read our articles about Tesla and the company’s fandom. And perhaps, maybe you’ve grown to have an expectation of what a hardcore Tesla fan is like (obnoxious). I recently went to a huge Tesla party at the Petersen Automotive Museum and mingled with some of Tesla’s biggest fans. It was an eye-opening party, and one that taught me that there’s a lot to loving Tesla.

On November 19, the Petersen Automotive Museum in Los Angeles, California held a celebration to commemorate an impressive exhibit. Located in the museum is Inside Tesla: Supercharging the Electric Revolution. The new display is a massive collection of much of Tesla’s history all in one place. Weirdly, the exhibition largely skips over the company’s original founders and jumps right to Elon’s initial investment. But it does cover so much, including Tesla’s lesser known ventures, such as providing batteries for the first American phase of the Smart Electric Drive program. 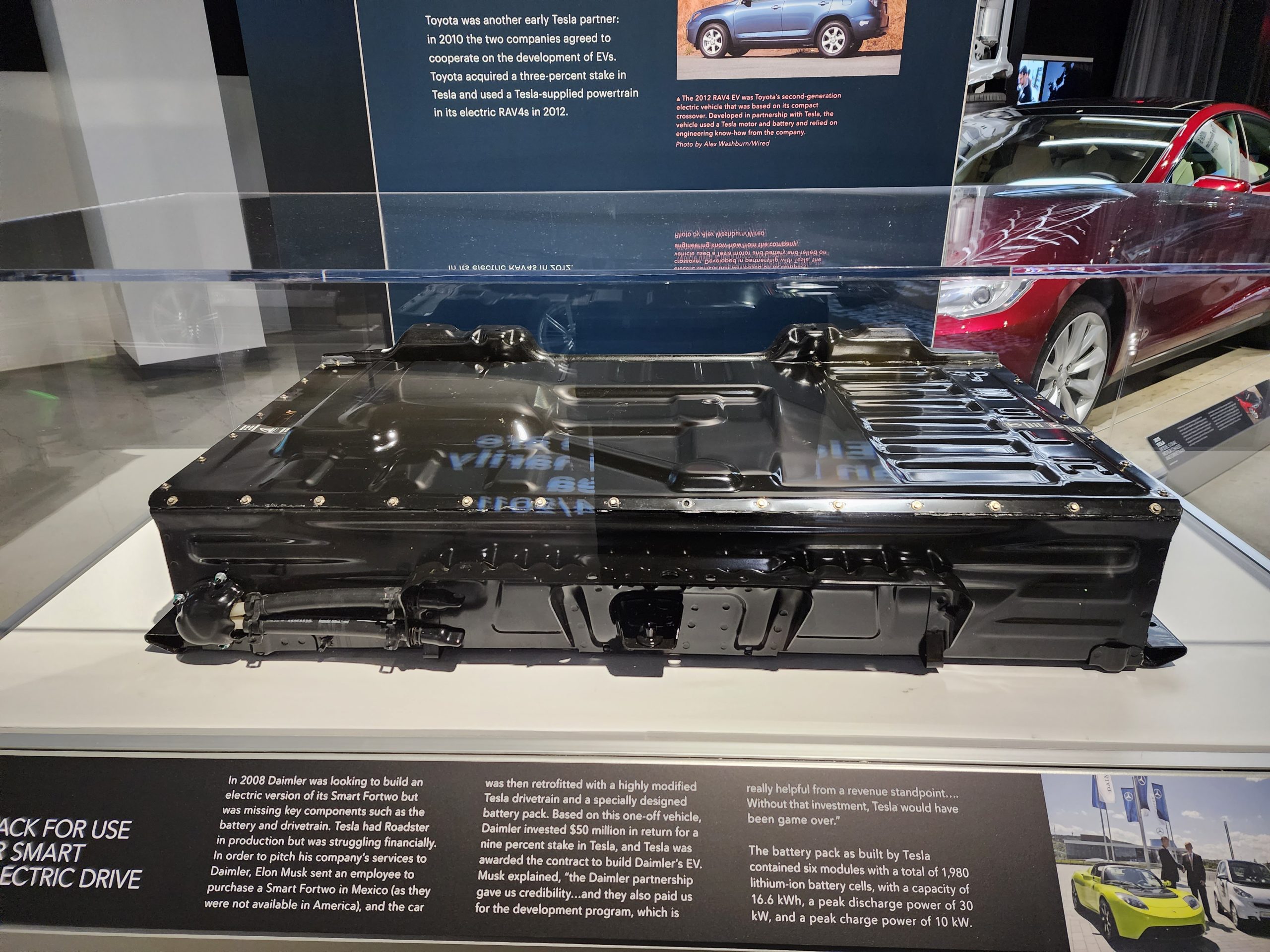 There was also an entire wiring harness floating in the air: 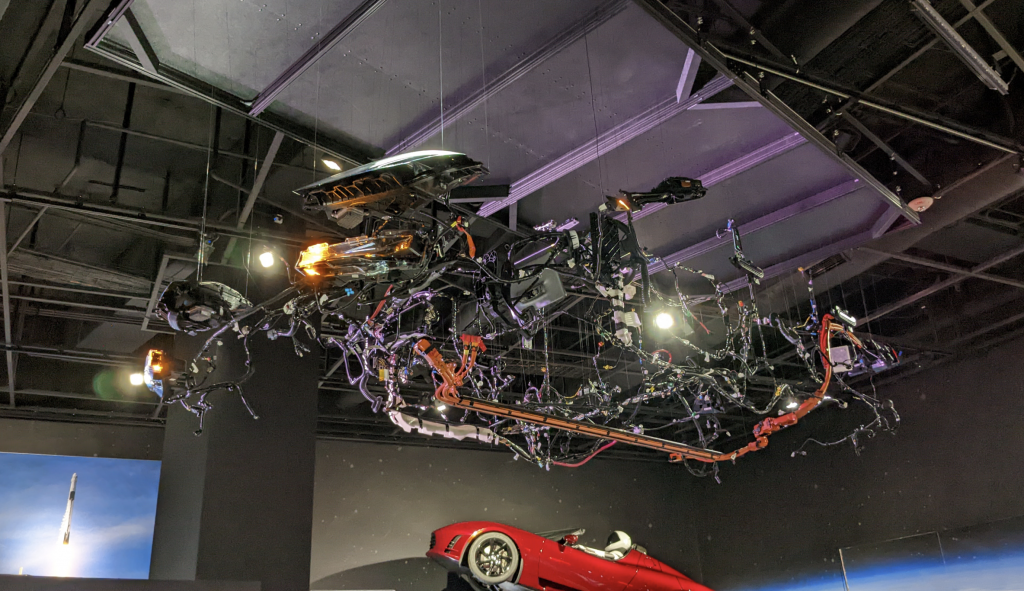 Plus, check out the exploded view of this Model Y: 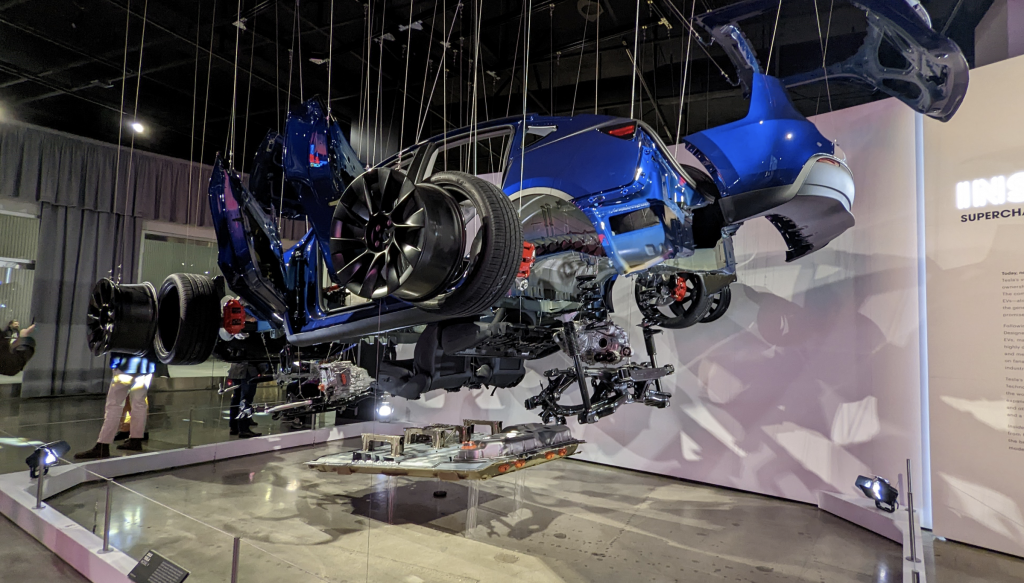 The ribbon-cutting ceremony for this exhibition wasn’t exactly a media event. Instead, it was an assemblage of some of Tesla’s biggest fans. Tesla fans came in from all over, even from across multiple states, just to come to an event that was just three and a half hours-long. Heck, Elon wasn’t even there (though head design Franz von Holzhausen was). That’s how dedicated these people are to this brand. And among those superfans were just some of your favorite Autopian writers, David, Jason, and myself.

If you’ve read our work for long enough, you’re probably well-aware that we are willing to be critical of Tesla when we feel it’s necessary. Heck, our automation expert Jason once went into a wolf’s den and debated Warren Redlich, a self-proclaimed fanboy of Tesla and Elon Musk. That debate went over an hour and a half, and saw Redlich flexing his attorney muscles, making the debate seem more like a cross-examination. Historically, Jason has been vocal on his issues with Tesla’s marketing, the Full Self Driving Beta system, Autopilot, and much more.

[Editor’s Note: Of all of us Autopians at the party, I likely had the most contentious history with Tesla fans, and my interactions hadn’t always been great. Once on a press trip, a Tesla fan asked to take a picture with me, and I agreed, only to have him grab my neck, imitating strangling, when the pic was taken. I don’t mind pretending to be non-erotically strangled, necessarily, but who does that shit without asking? Anyway, not all Tesla fans/employees are like that. I had a wonderful conversation with a Tesla battery engineer and his sleep scientist-wife and they were charming and knowledgeable and everything you’d want your battery engineer to be. He had interesting ideas on the best analogies to describe how electricity works, too. – JT] 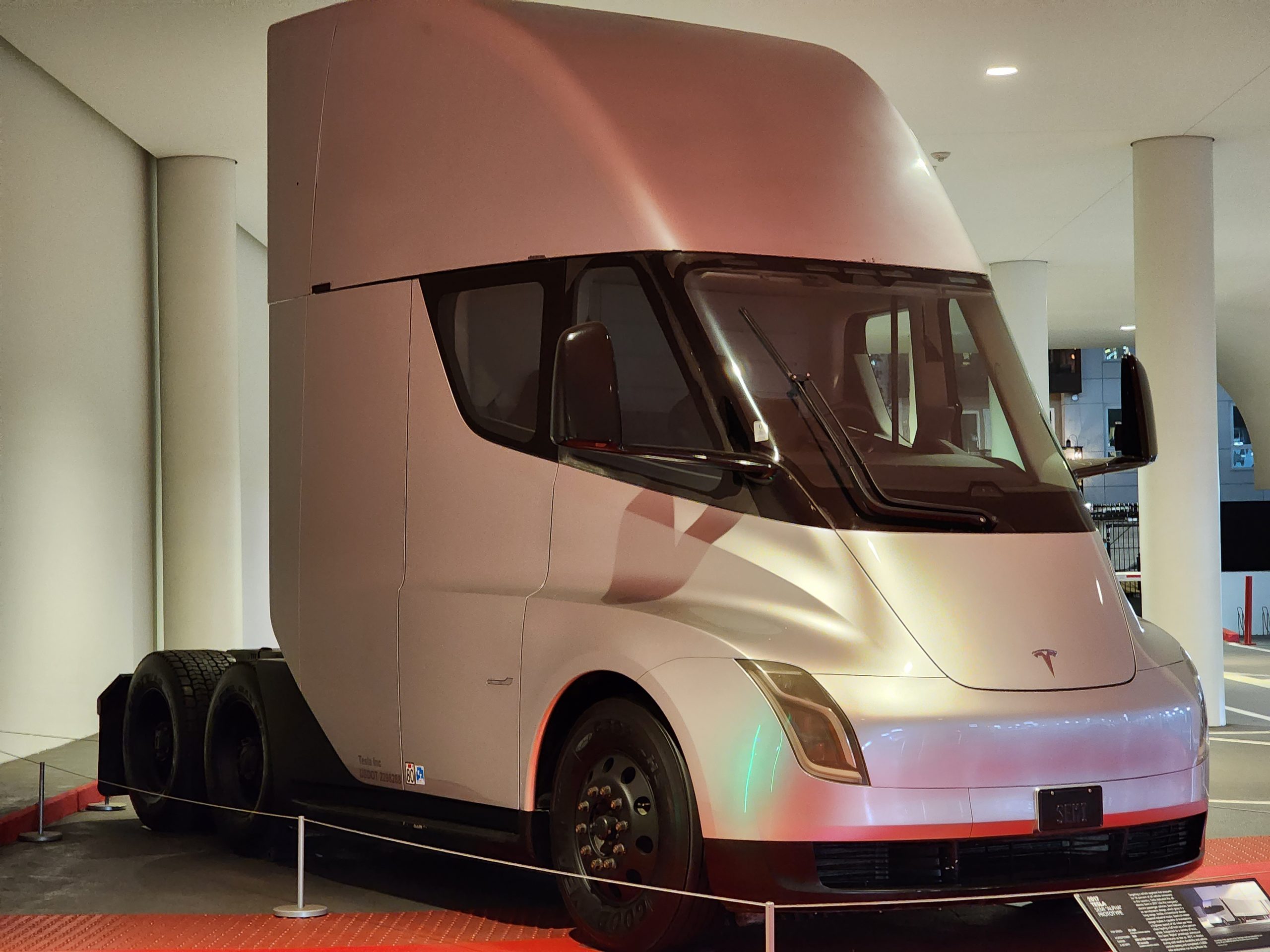 So you’d think, as we did, that hanging out with Tesla’s biggest fans would surely result in a less-than-ideal time. We weren’t hiding, either. David and I went around talking to many Tesla owners throughout the night. We wanted to know how they got into Tesla, what they love, and how they feel about Elon. Whenever we talked to the other attendees, we openly admitted that we’re formerly of The Lighting Site. And we openly admitted that we don’t own Teslas and we aren’t the biggest fans (though we respect the engineering and vision). Yet, at least for me, the responses that we got weren’t just unexpected, but actually pretty sweet.

One of the more memorable discussions that we had that night was with a father and a son. For them, Tesla was more than just a car. Owning a Tesla meant having something of status. Hearing them describe owning a Tesla reminded me of how my mom talks about owning a Mercedes-Benz once. To them, Teslas were a physical example of “making it.” Owning a Tesla meant doing something right in their life. The son couldn’t wait until he got a Tesla of his own. And I respect that. For me, buying my first Smart was like that. Coming home with that car meant that I worked hard, and played my cards right. And now, those cars for me are a first-generation Tesla Roadster and an Audi R8 V10.

Speaking of ICE-powered cars, these Tesla fans said that they were still enthusiasts of internal combustion vehicles. They loved the sorts of poster cars found in the Petersen Automotive Museum. However, given the winds of change in the world, they feel that EVs are the future, and Tesla still has a measurable lead on everyone else. These Tesla fans liked Elon’s direction for Tesla, though they agree that everyone would probably be better off if Elon pumped the brakes on his Tweets.

[Editor’s Note: I recall the father telling me about how he’d been told by a friend, way back around 2009, to “Check out this Elon guy” because he was doing things that nobody thought possible. The gentleman, named Barber, kept using the term “FUD” — fear of uncertainty and doubt. He liked that Tesla has been proving the haters wrong. I can respect that. -DT]. 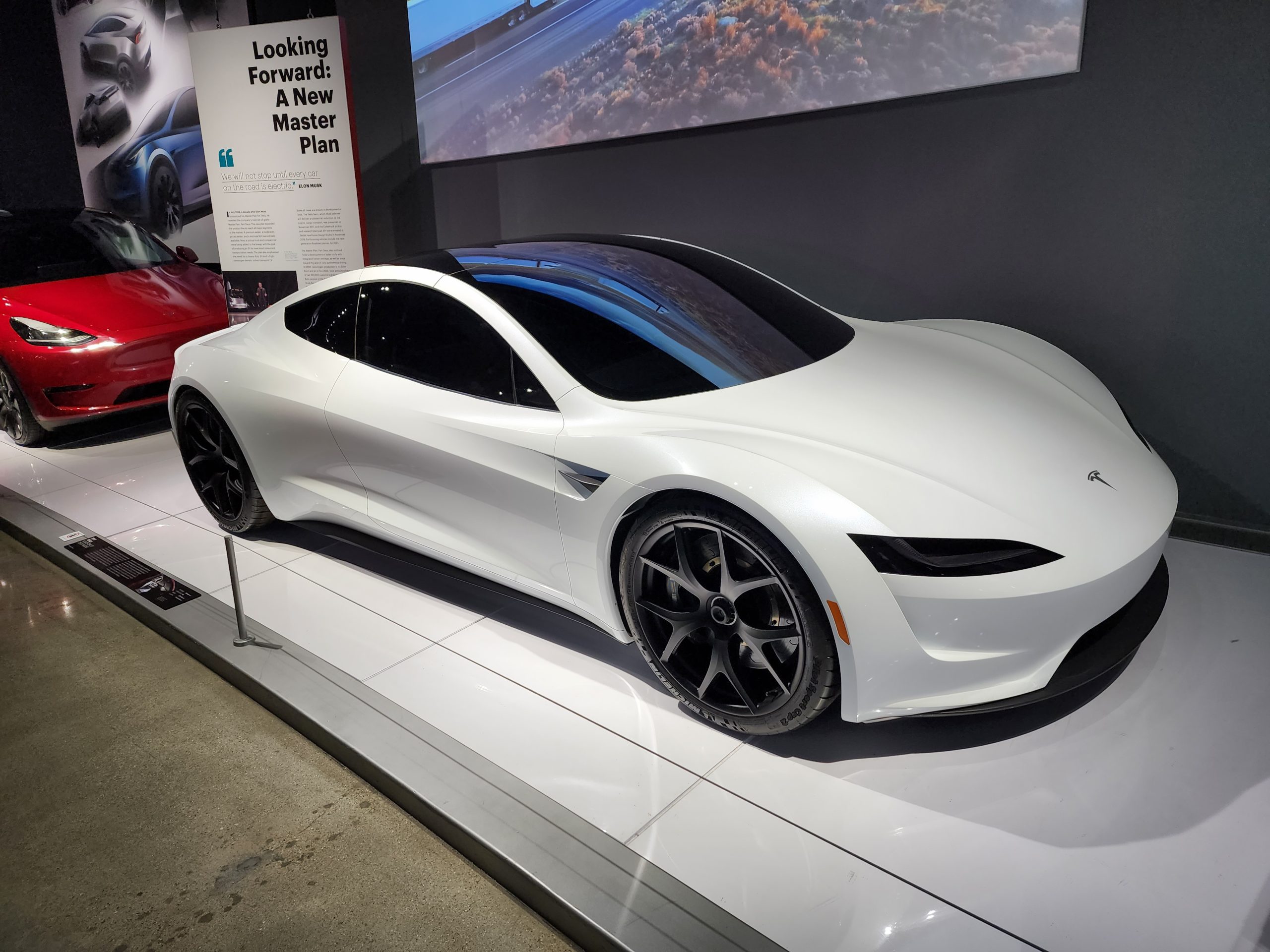 This type of story was pretty common throughout the night. A number of the people that I talked to bought their Teslas as a treat to themselves for working hard. Many of these people weren’t tech “bros,” lawyers, or venture capitalists, but engineers, artists, real estate agents, and more. These were regular people working cool jobs. Some of them were more sympathetic to Elon than others, but most of the Tesla enthusiasts here didn’t seem really any different than hardcore fans of any brand, really.

But almost all of them had one shared concern, and it’s that they believe that Tesla is a low-hanging fruit for easy clicks. Basically, they feel that you’re probably more likely to read about a Tesla recall or crash over the same but about a different brand. A few of them elaborated that it’s not that problems shouldn’t be highlighted, but that those problems shouldn’t be turned into clickbait. And, I totally understand this, too. Back when Smart still sold cars in America, I found myself constantly rolling my eyes whenever someone on YouTube made a video calling Smarts “rolling coffins.” And for years, I saw a picture of a Volkswagen Crossfox crushed into the front of a truck being circulated as a Smart Fortwo crash. I’ve lost count of how many times I’ve said “they’re actually pretty safe!”

But going back to these people. Going to this party felt no different than going to a party for any other automaker. One lovely fan that I had a conversation with went all of the way to dress up as a SpaceX astronaut. Her helmet was 3D-printed, as were the Falcon rockets that she gave out to everyone she met (see below). Heck, her dancing made me want to dance! 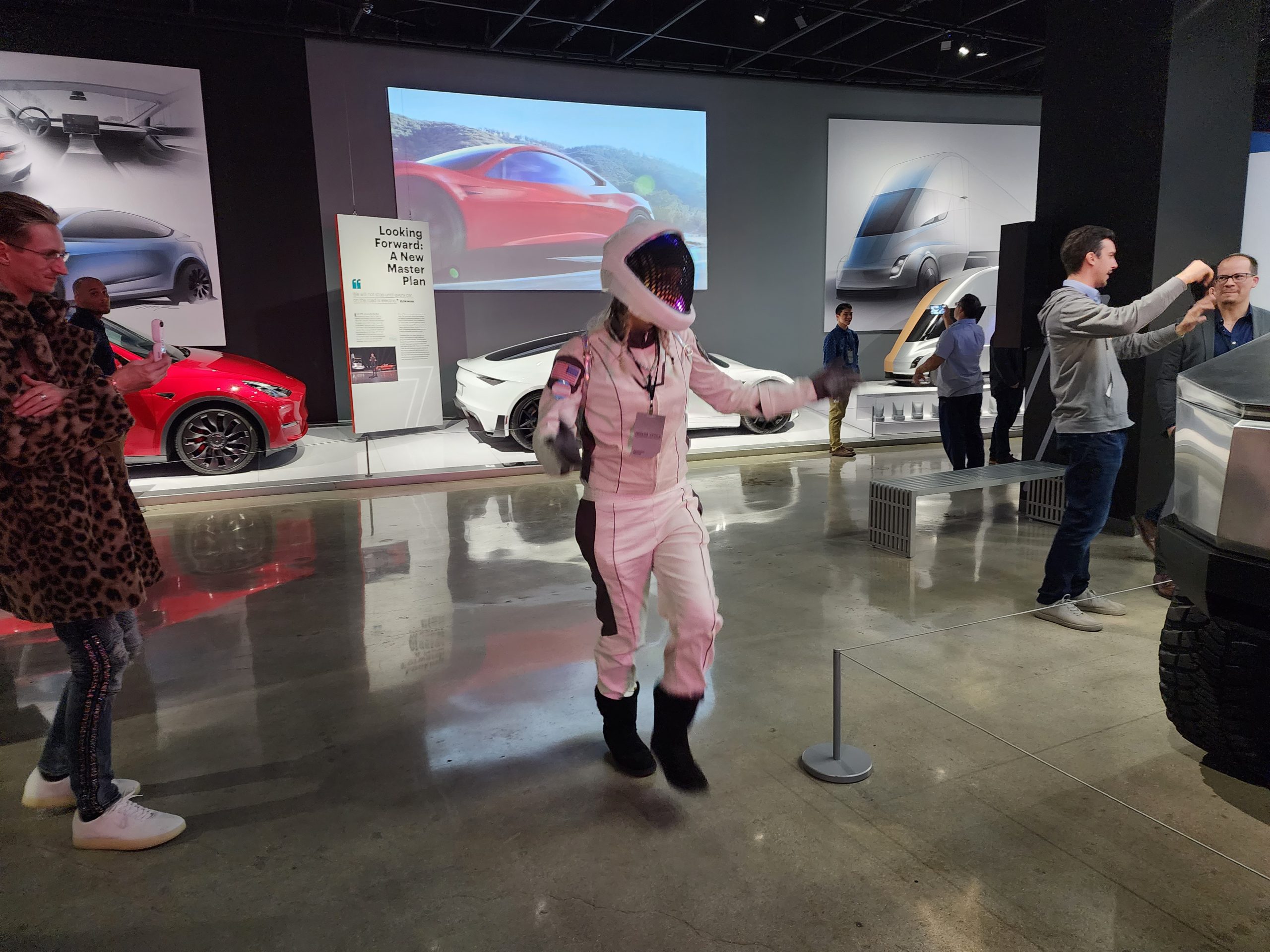 This party made me arrive at a realization, and it’s that loving cars can get complicated. Some of these people weren’t huge fans of Elon, yet still owned or wanted a Tesla. But, that’s not all that crazy. I still love Volkswagen despite Dieselgate and people love Mercedes-Benz despite its curious re-writing of history. Sometimes you love the car, but maybe not so much the strings that came attached to it.

Later in the night, David made a comment that stuck with me, and it’s that Tesla drivers are sort of in their own corner of car culture, even though many owners are not all that different from the rest of us. Tesla fans mod their cars, race them, break them, and wrench on them all the same. Sure, some are more passionate than others, but not even that is too different. David once got a death threat by an AMC stan for saying that an engine was bad [Editor’s Note: I can’t wait to publish that. -DT]. I guess what I’m trying to say is, don’t let any brand’s most rabid fans turn you away. I had a blast partying with Tesla’s fans, and I would totally do it again. 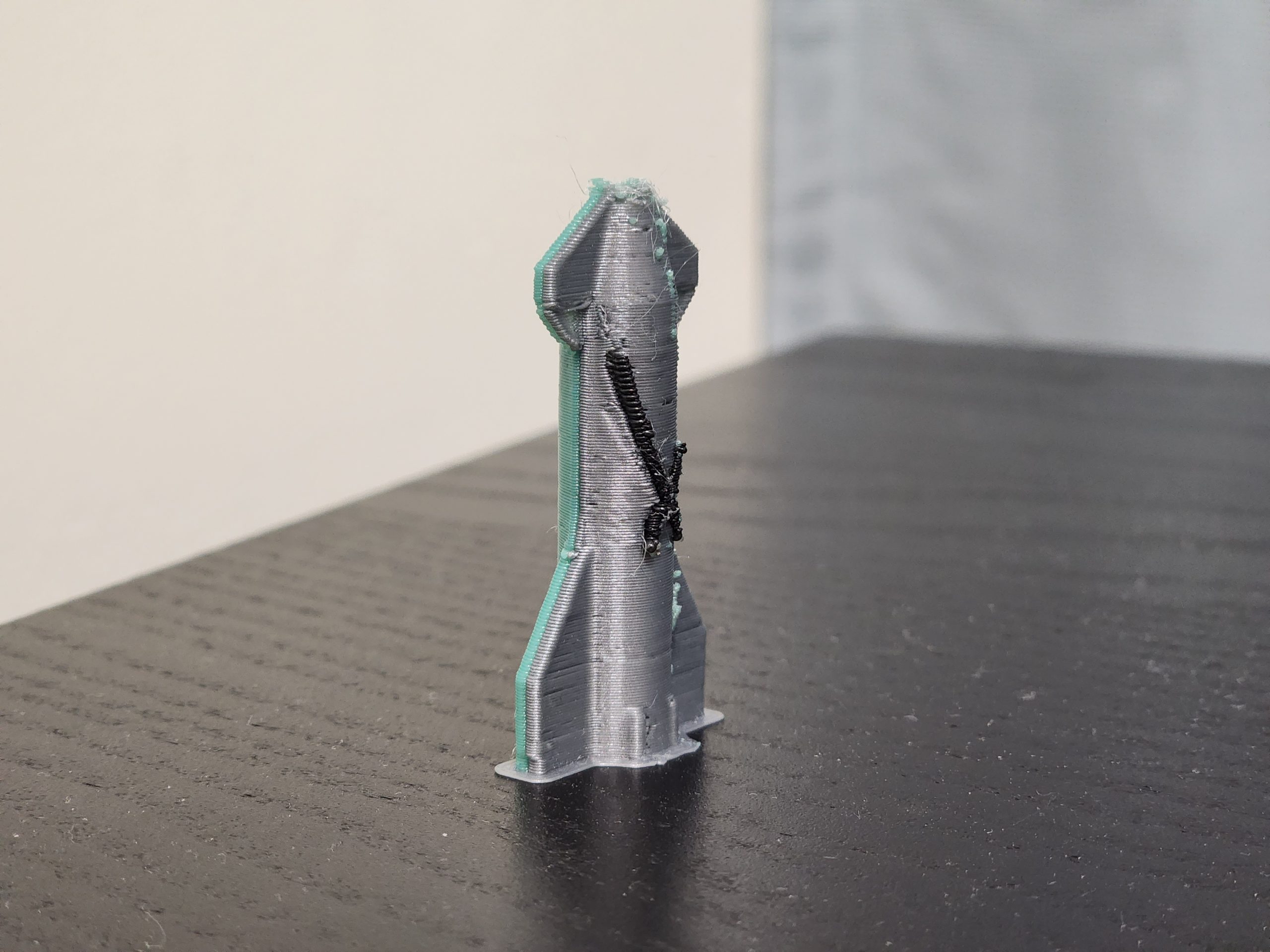 Mercedes is a lifelong fan of all things powered by an engine. When she isn't driving one of her five Smart Fortwos or her 14 other vehicles she could be found in the cockpit of a Cessna 172 or perhaps swimming in any body of water that she could find. She also has a deep love for buses of all kinds. Please send her buses. mercedes@theautopian.com Instagram: @mistymotors Twitter: @Miss_Mercedes30 Facebook.com/neonspinnazz
Read All My Posts »
PrevPreviousWe Walked Around The Hyundai Vision 74 Concept And It’s Just As Good In Person
NextOh, So That’s How Seats Work: Cold StartNext