Facebook-f Twitter Instagram Rss
Menu
Menu
Home » The Third-Gen Mercury Capri Was Like The Miata If No One Really Gave A Shit About The Miata: Mercury Monday

The Third-Gen Mercury Capri Was Like The Miata If No One Really Gave A Shit About The Miata: Mercury Monday 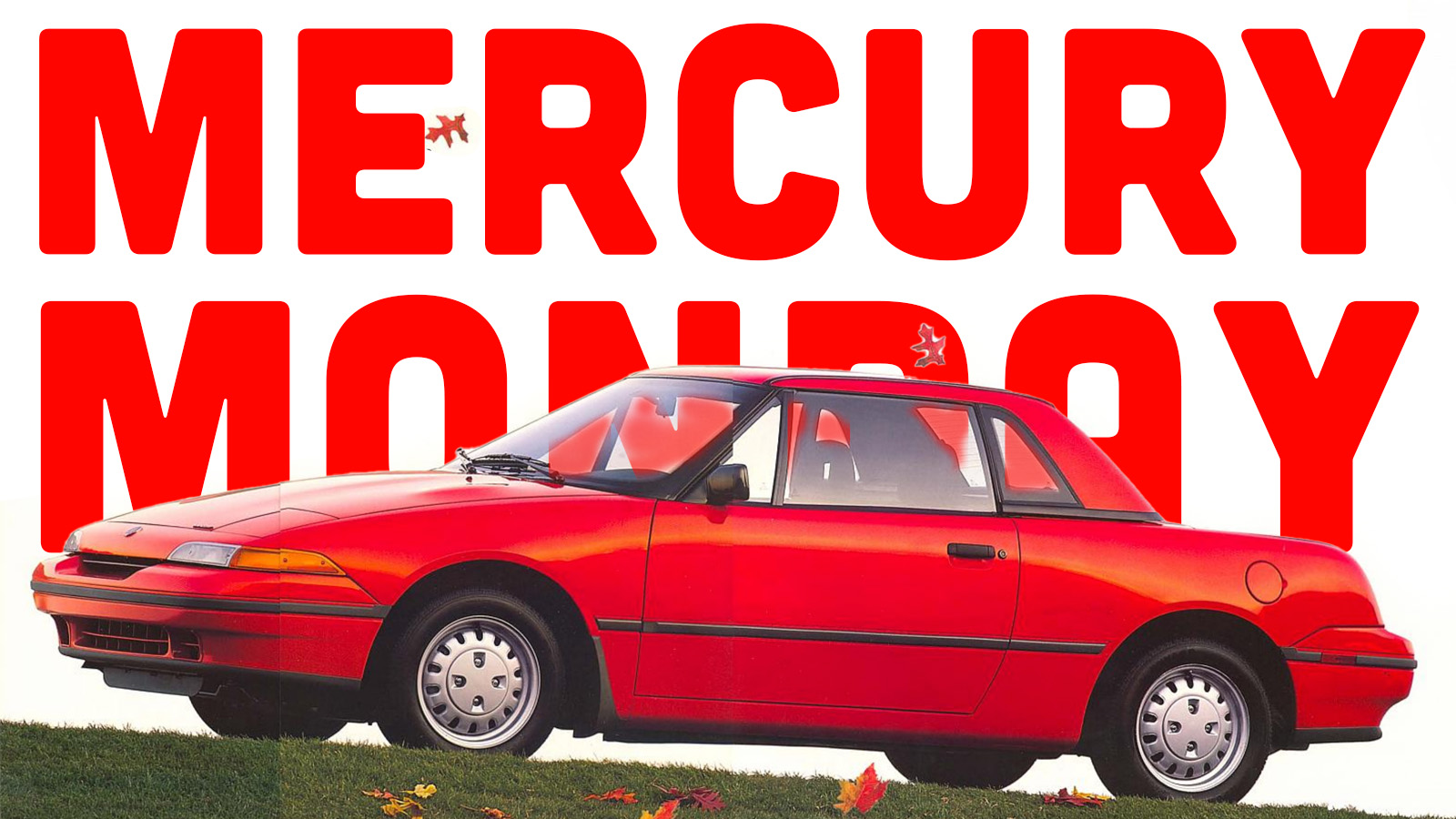 It’s Mercury Monday! And, incredibly, on an actual Monday! Holy crap, right? It’s glorious, and like most glorious things, don’t get used to it. But we’re here now, and we’re doing it, so put on your thick, woolen Mercury-appreciation pants and get ready to liberally soak them in appreciation-urine as we discuss the most curious Mercury Capri, the third-generation Mercury Capri. Based on a Mazda platform, it was a cousin to the iconic Miata, but pretty significantly not a Miata. It had its charms, I think, but today it’s pretty much a footnote. Well, not today today, because today is Monday. Mercury fucking Monday, and the third-gen Capri is going to be pulled from footnotes and get its entire own footpost, because it’s worth it. Or, you know, close enough.

I actually have some experience with these little Mercurys because I remember in the early 1990s, with my sister and I well-evicted from home, my parents were considering buying one of these. They liked the idea of a little convertible, so they looked at a Miata and the Capri. I remember the only Miatas available were manuals, so I drove my dad around in one since he can’t drive stick, and then I think I was disinvited from car shopping.

But, they did get a weekend loan of a Capri by the dealer, and I think they had fun with it, but ultimately didn’t pull the trigger. I think in the case of my parents, diminutive shtetl hobbits who never failed to complain about the temperature of their food in a restaurant, the Capri was a bit too much sportscar. That’s pretty much the opposite of what the rest of the human population of Earth (and anyone in orbit) thought at the time, but I felt like I should disclose everything.

So, what was this Capri? It was built from 1991 to 1994, and was the first Capri Mercury sold in five years, since they stopped building the Fox body-Mustang-based Capri in 1986. This new Capri had no Ford equivalent car it was a re-badged version of, but was instead based on the same platform as the Mercury Tracer, which was based on the Australian market Ford Laser, and had the same drivetrain as a Mazda 323 hatchback.

Design-wise, the Capri was a direct adaptation of a Ghia (owned by Ford) show car from 1983 called the Barchetta. The Barchetta was a sleek, wedgy, very clean design that predicted Ford’s New Edge design language, despite showing up almost a decade earlier. It as a look that worked the lights and bumpers elegantly into the body cutlines, and while fresh and modern, seemed plausible for production. 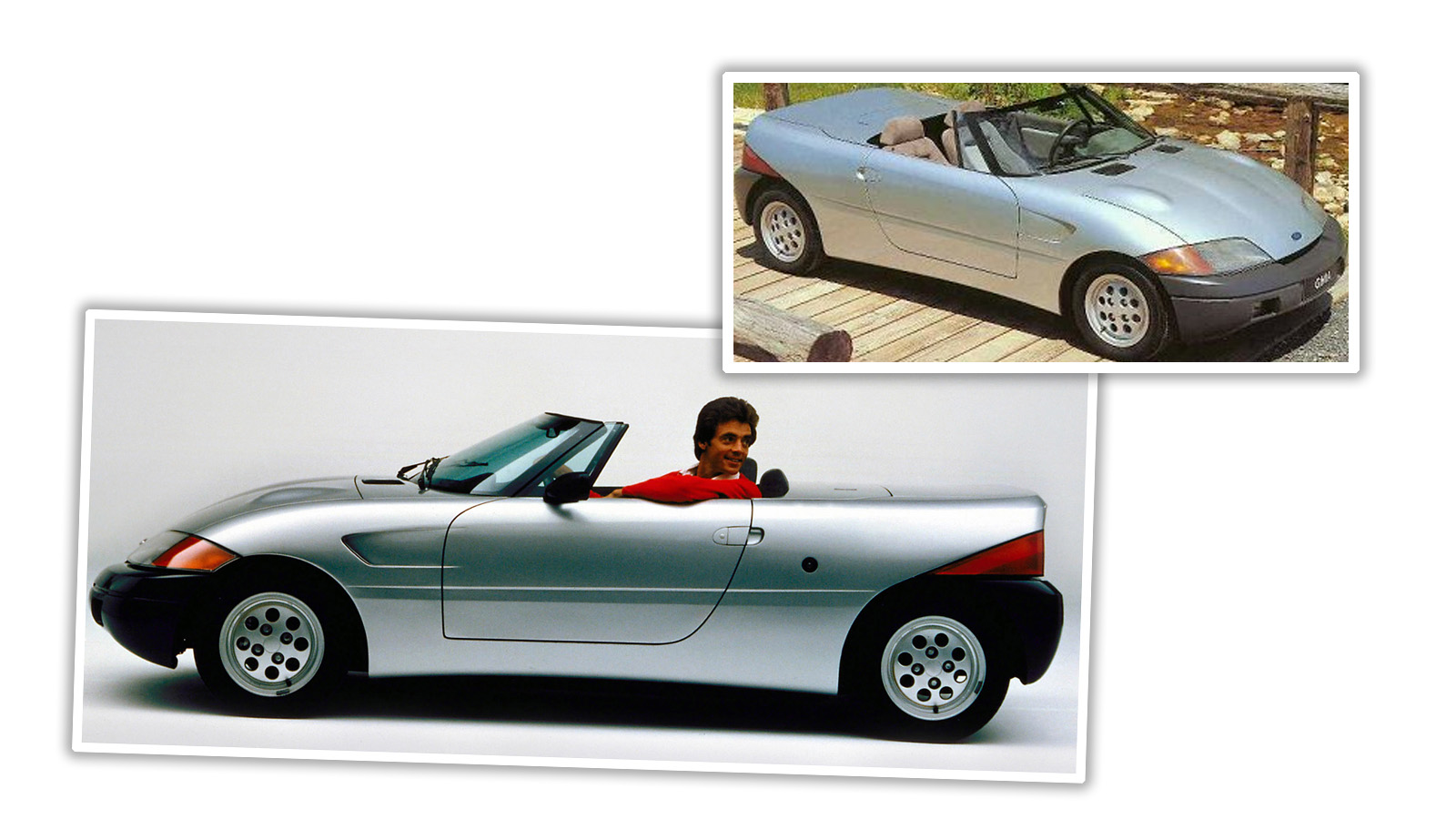 The Barchetta was built on a smaller Fiesta platform, and was aggressively, deliriously tiny. It would have kept the Fiesta’s FWD layout, but would have been so nimble and taut and, well, impractical and fun. It would have been a real toy of a car, and there’s absolutely a place for those kinds of things. 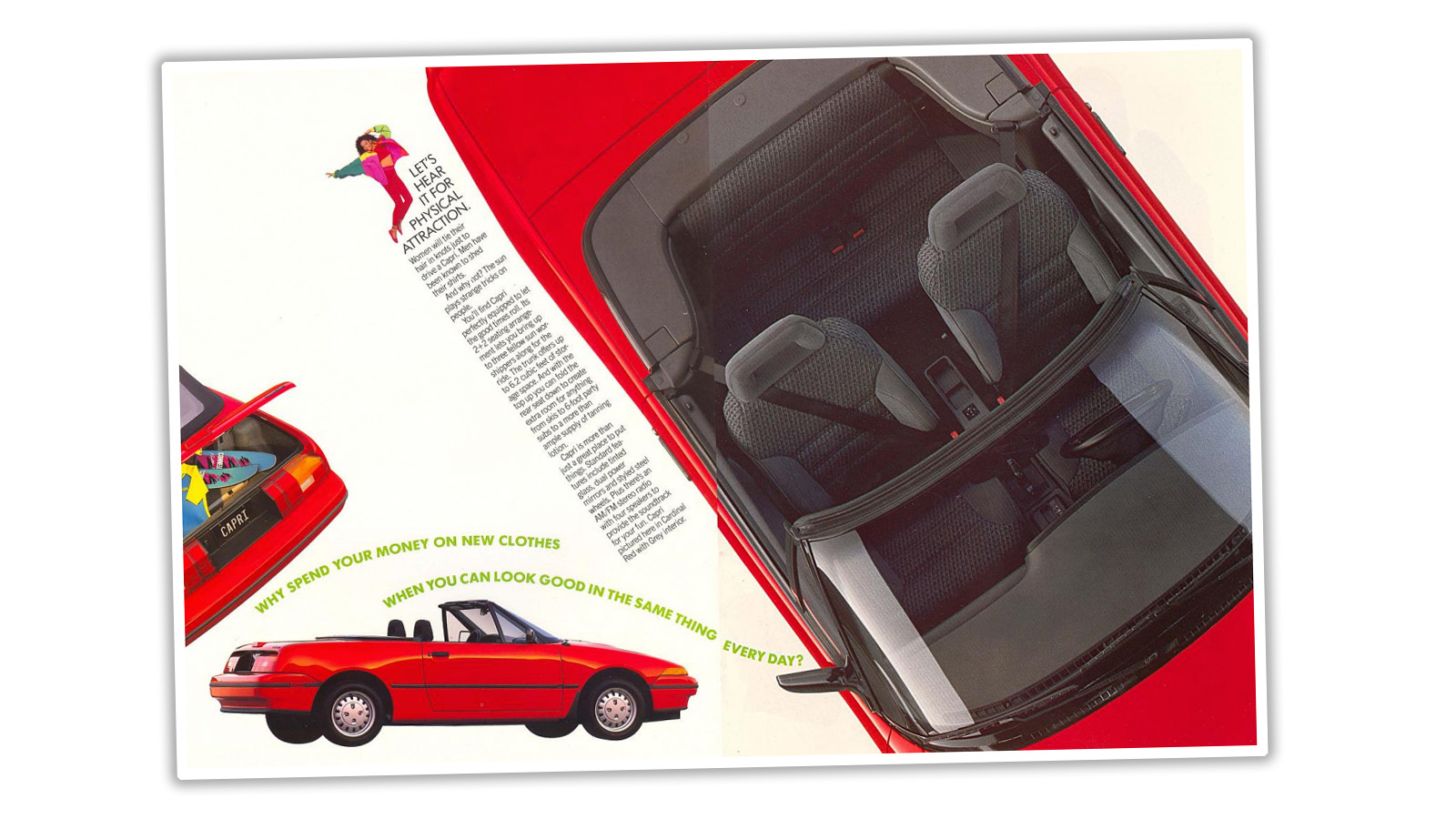 There’s a place for toys and a place for practical cars, but there’s not a lot of interest in cars that try to do both, kinda crappily. And that’s sort of what happened to the Capri as it evolved from show Barchetta into showroom Capri. Ford/Mercury started to talk to too many people, and what was once a pure expression of automotive glee became more of a wan smile.

The Capri got bigger, and heavier, by a pretty significant amount. A sort of vestigial back seat was squeezed in, the trunk was embiggened, and the front end was made a little more conventional, though it did get pop-up headlamps, with clear position/parking lamps sort of pretending to be headlamps when the main lights were closed. 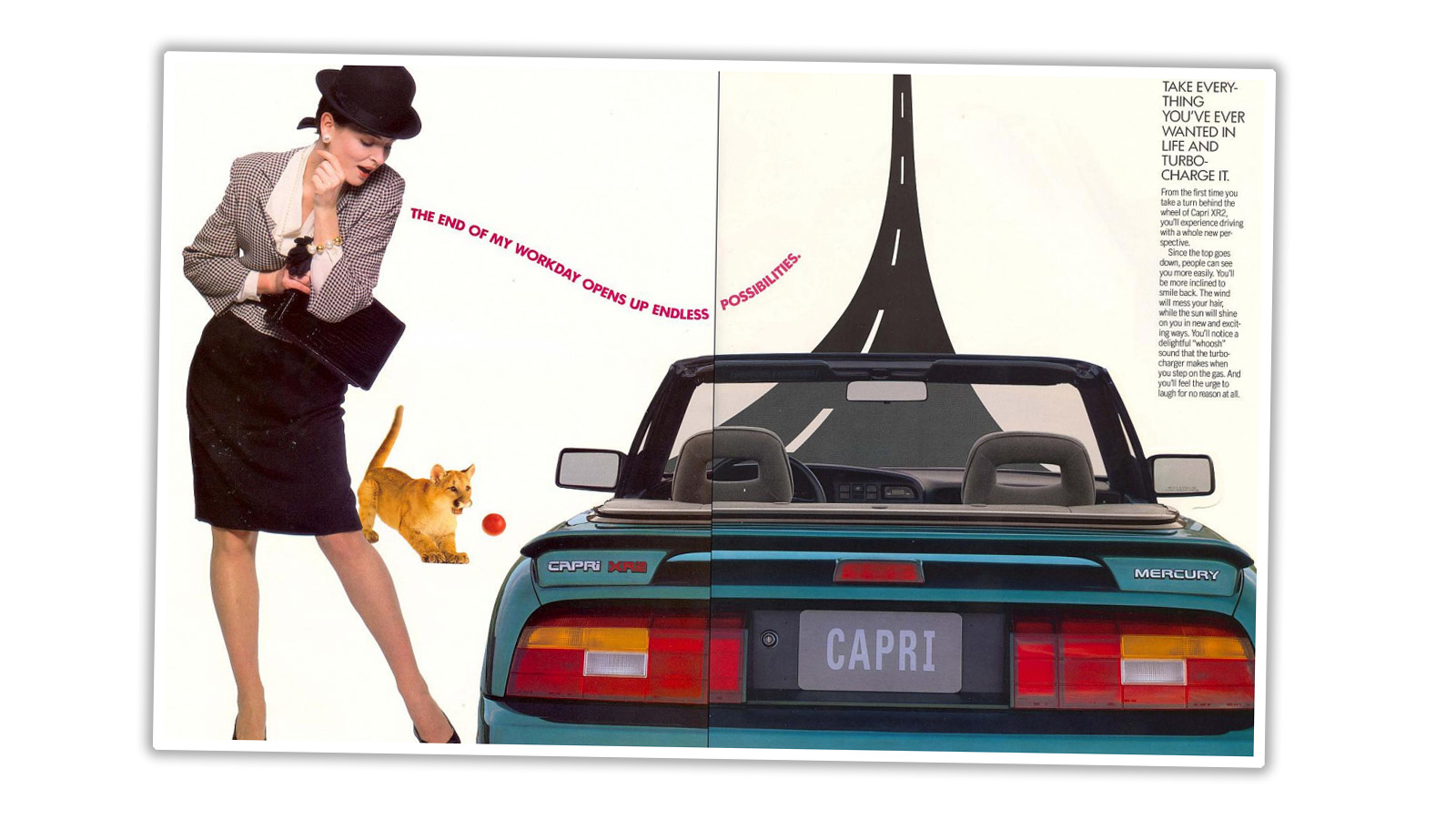 Speaking of lights, I always liked the taillight treatment on these; the gridded, tri-colored lights were flush with the bodywork at their base, but tapered as they went up, with the top edge being dramatically chamfered, leaving the trunk lid forming a sort of canopy or awning over the lights and the inset rear panel. It was a novel look that I’ve not seen on many other cars before or since.

It got domesticated a bit, and while that’s not necessarily a bad thing, it does kind of make the purpose of the car muddier. Because, with a base engine (Mazda’s 1.6-liter B6D inline four) making about 96 horsepower, it just wasn’t all that quick. The XR2 version got the turbocharged engine, making 132 or 140 horsepower, depending on where you look, so that was better.

It’s also worth reminding that these Capris were all built in Australia, all 66,000 or so of them, which may have made them the best-selling Australian-built car in America at the time? You can check on that if you’d like, or we can just say that’s so, which is fine by me.

Still, it was a FWD small roadster that couldn’t drive as well as a similarly-sized RWD Miata, which made everyone wonder, well, what’s the point? If a back seat and a good sized trunk are your priorities, I’m going to go out on a limb and say that a buyer with those needs could probably be served better by, oh, pretty much anything on the market.

Still, it was a stylish little convertible that you could stick your dog or small chimp in the back of, and that’s gotta be valuable to some people, right? Let’s see how Mercury tried to advertise these not-Miatas to folks back in the optimistic early 1990s, an era of falling Berlin Walls and Deee-Lite informing us what organs groove resided in.

Let’s look at this long ad first, because it’s peculiar:

So, what’s going on here? We get a full minute-long little story of a guy breaking up with a pretty lady who likes hors d’oeuvres in a fancy European-looking restaurant, and who takes off laughing in her new Capri, I suppose reveling in the freedom of some drip who has to narrate everything? I suppose this ad plays up the basic appeal of little red roadsters in general, the ideal car for laughing off a breakup, even if there was at least one very minor fist-bang on the steering wheel.

The Australian market called these Ford Capris, and attempted to capture a similar feel, I think, only this time it’s a guy who, I think, teleports into a Capri brochure instead of sitting with a woman who drinks orange juice?

Is that what happened? Did he not want to bring his citrus-enjoying friend with him? I’m a little confused.

Mercury also seems to have decided that all that scenery and outdoors and humans were just such a distraction from selling the car, so other ads dispensed with all that frippery, letting the car speak for itself, sorta, in an alabaster void:

There’s text but no voice overs, so you’ll need to read on your own. Also, in absence of a power top, the top going down had to be portrayed in stop motion, which is a bit of a cheat, if you ask me, which, to be clear, you did not. Taking the stop motion and white void idea a little further, Mercury then tried to appeal to the lucrative stickman market with this ad:

I mean, Mr.Sharpielines and his dog, Scrawl, do look pretty happy in that Capri! Sure beats the hell out of being trapped in that box, too. Also, is that his dog? Or did he just take it in after almost hitting it?

You really don’t see many of these little compromised Miatas from Down Under around on the streets anymore. Where Miatas have developed dedicated and loyal fanbases of people that keep them going and track them and fix them up to track them some more, the Capri never really had the chops for that, and didn’t quite look good enough to make up for that lack, either.

I’m sure the people that had them found them fun and enjoyable and all must have at least one fond memory of the right summer day when an easy-to-drive roofless little car was just the right thing, at that time and place, and I’d never want to take that away from anyone. Beyond that, though, the thirdest Capri is most remembered as a lesson in when not to dilute a good idea, if it’s remembered at all.

I'm a co-founder of the Autopian, the site you're on RIGHT NOW! I'm here to talk to you about taillights until you cry and beg me to stop, which I absolutely will not. Sorry. Hug? Also, David's friend.
Read All My Posts »
PrevPreviousCarl Hahn, The Man Behind The VW Beetle’s Success In America, Has Died
NextA Car That Shares My Name: Cold StartNext