Happy Friday! As you are no doubt aware, today writers for the Autopian (including myself) are traveling to sunny Los Angeles, California, for tomorrow’s big meetup. I’m not sure exactly what’s going to happen, but I have a feeling that with everyone in the same room, there is a non-zero chance that someone will goad someone into a bad automotive purchasing decision. So I thought it best to be prepared, and take a look at the one category of vehicle I know all of us have ridden in at some point: tow trucks.

But first, let’s see how our Italian transplants fared:

Ouch. I guess no one wants to do the Lido Shuffle. But who would, when you can do the Bundy Bounce instead?

Anyway, moving on. There are three vehicles you never want to have a need for when you’re out for a drive: fire trucks, ambulances, and tow trucks. I am proud to say I’ve never needed the first two for anything vehicular, but I have had my share of contacts with the third. And I’m sure many of you have, as well.

So just for the hell of it, we’re going to look at the two most affordable functional tow trucks I could find on Craigslist in Los Angeles. You know, just in case. Besides, tow trucks are cool. At least, when you’re not waiting for one. 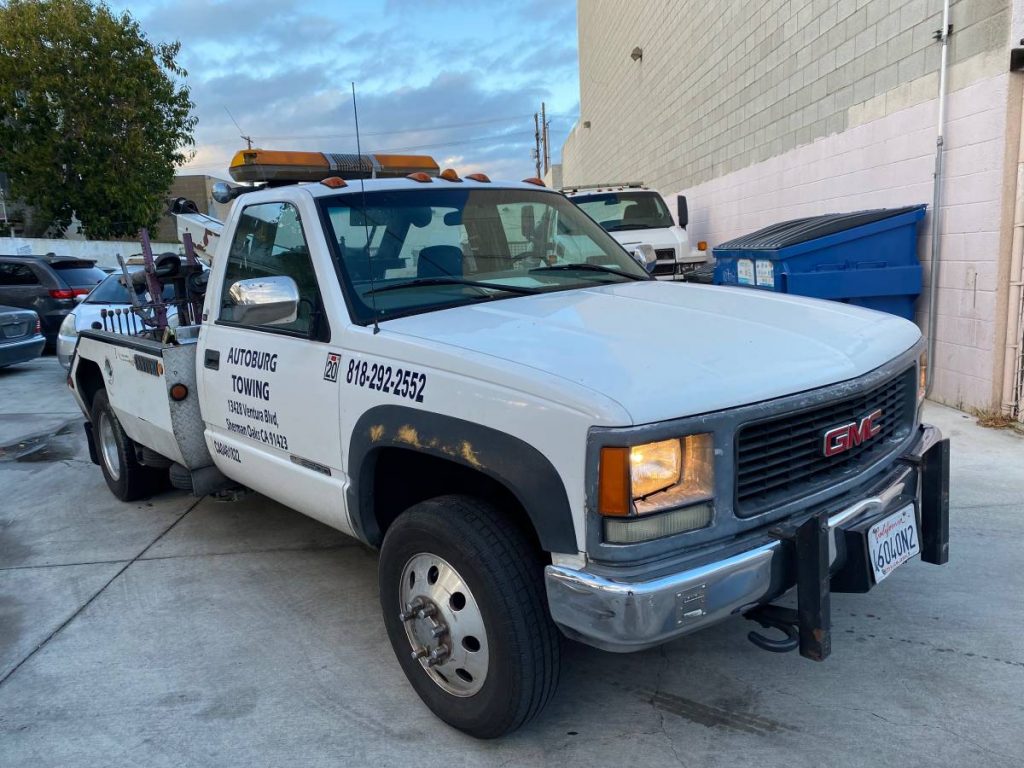 I’ve always thought it was cool how an entire truck line can have exactly the same sheetmetal and be completely different underneath. This truck uses the exact same cab as my half-ton pickup, but under the skin, it’s a much tougher beast. But then, to be able to pick up and tow pretty much any passenger vehicle on the road, it has to be. 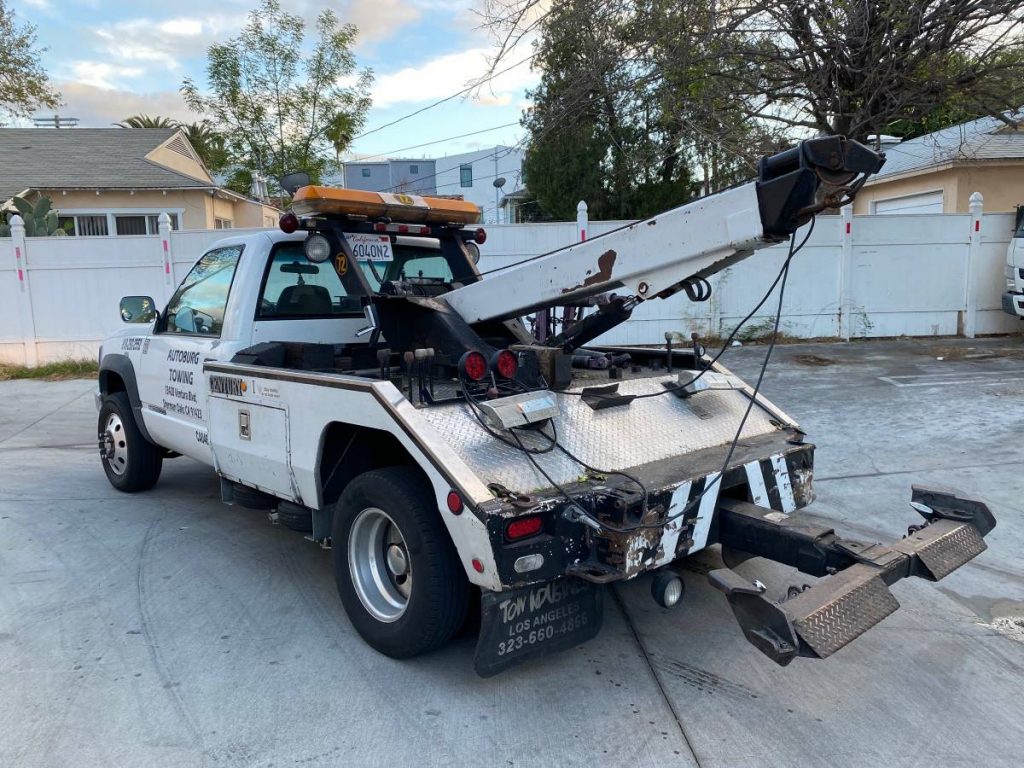 This is a “wheel lift” truck. That T-shaped looking thingy sticking out of the back of the truck lowers to the ground and lifts it by the front wheels, instead of picking it up by the frame or bumper using the boom and cable above. This is much gentler on the car, and so typically used for cars that aren’t damaged, just broken. The boom comes into play when the front of  the car is mangled and the wheel lift can’t be used. 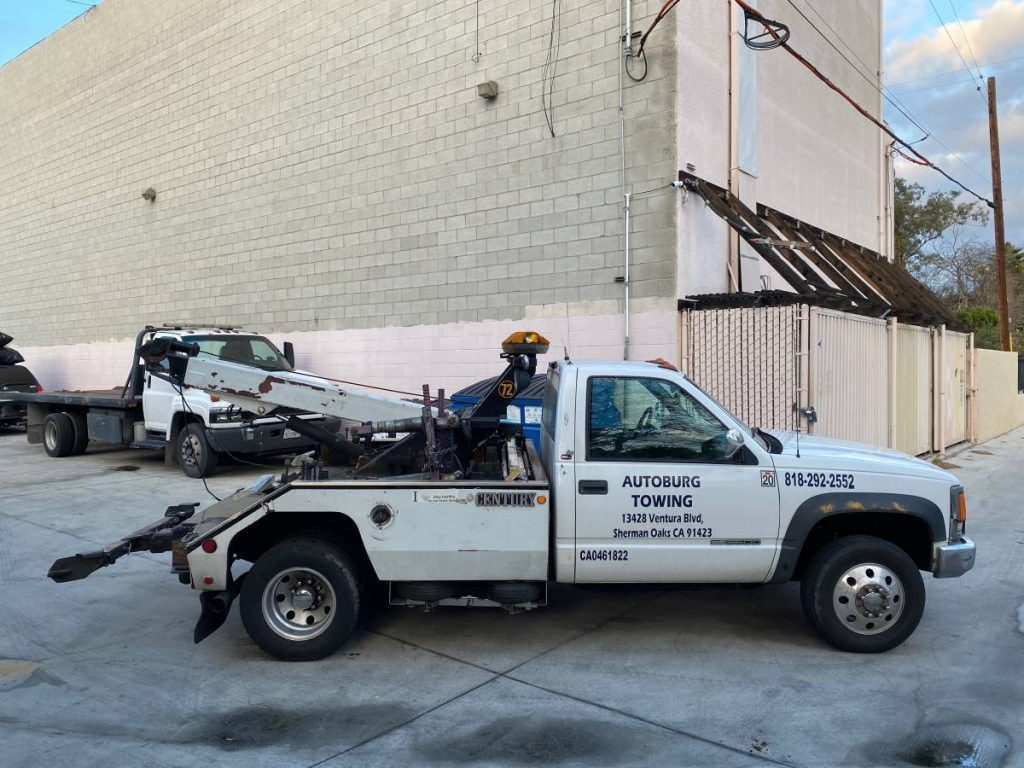 This truck is powered by what looks like a 454 cubic inch Vortec V8, which sends power to the dual rear wheels, or, with the pull of a lever on the floor, the front wheels as well. The extra traction of 4WD probably doesn’t matter too much in most of the San Fernando Valley where this truck was based, but for pulling vehicles out of ditches in the canyons, it would definitely come in handy. 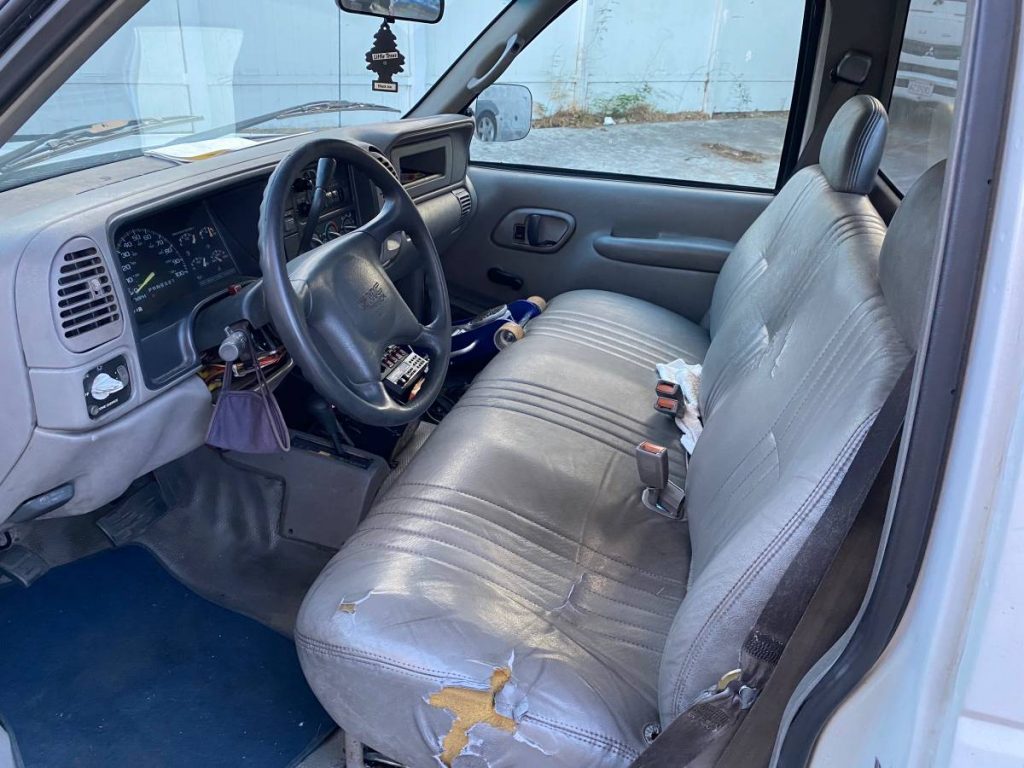 It’s not exactly luxurious, but because drivers spend hours and hours in the cab of these trucks, they have to be comfy. This one looks like it’s in decent shape, with a tear in the vinyl right where you’d expect, where the driver slides in and out of the seat a hundred times a shift. The seller says it’s “very well maintained,” but it does have a salvage title (ironically) for unknown reasons. 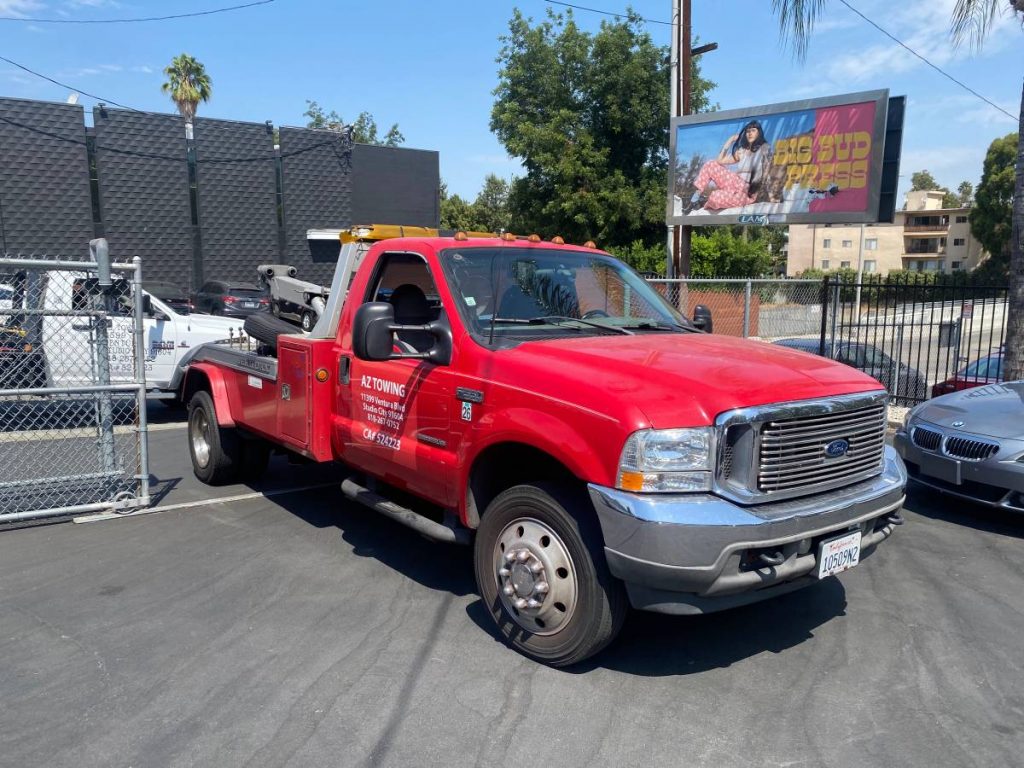 Not burly enough for you? Well, we also have a Ford F-550 Super Duty. This monster has a gross vehicle weight rating of 17,500 pounds, which means it can likely tow anything as big and heavy as it is. It’s powered by a 7.3 liter “Powerstroke” turbodiesel engine made by Navistar International. This is also known as the “good Powerstroke” engine; these are half-million-mile engines. 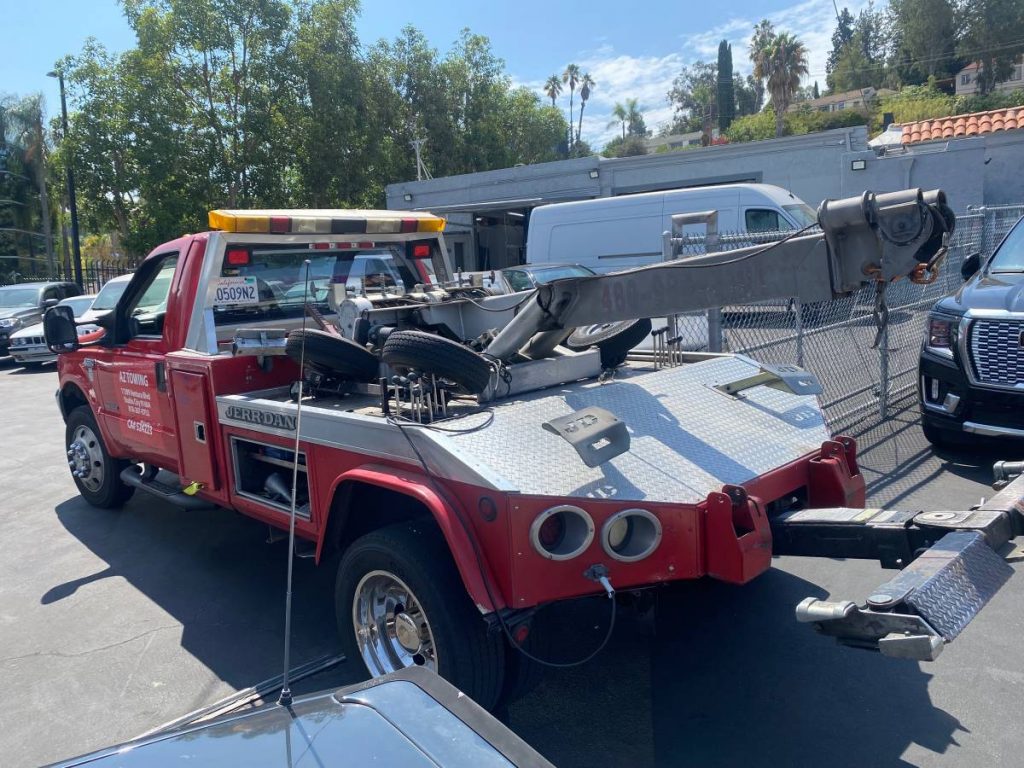 Like the GMC, this truck is a wheel-lift type, and also has a boom with a cable. And just in case you aren’t aware, those extra wheels up in the bed of the truck are dollies for the (usually) rear wheels. The front wheels are lifted by the truck, and then the rear wheels are lifted onto the dollies, so none of the towed vehicle’s wheels are touching the ground. This is required when towing an all-wheel-drive vehicle, or any other instance in which the rear wheels won’t roll freely. 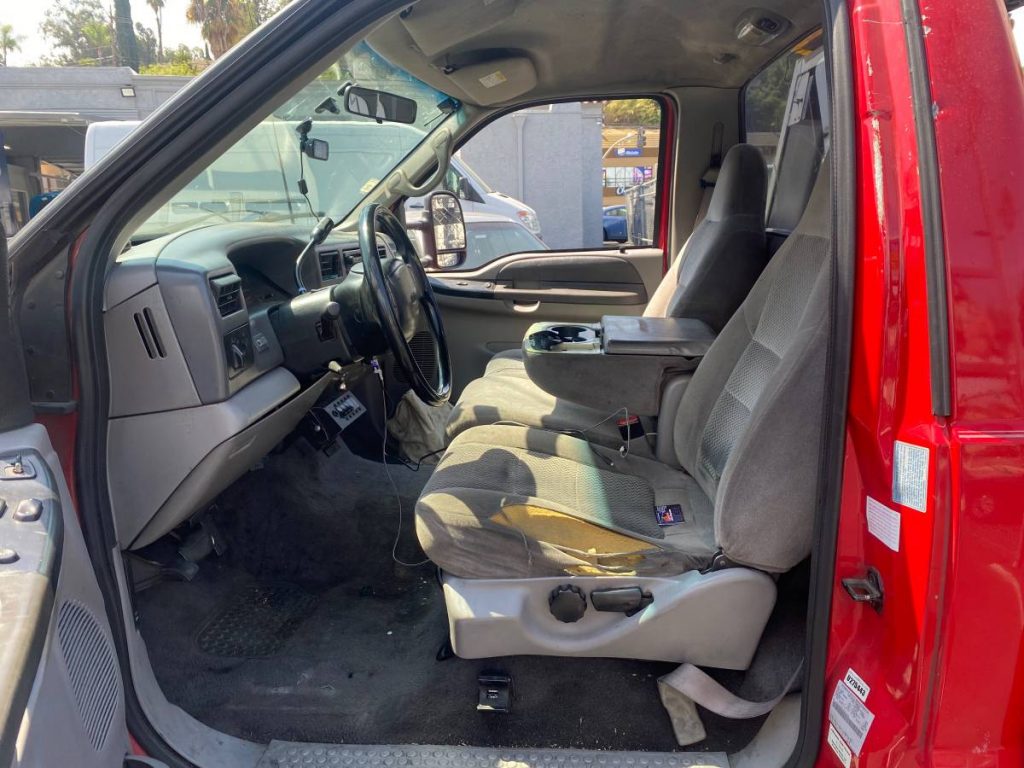 This truck has a lot more miles on it than the GMC, and shows a commensurately greater amount of wear on the interior. But it’s in good shape, and the seller says it “runs great” and “everything works.” It lacks the four-wheel-drive of the GMC, but it does show a clean title. 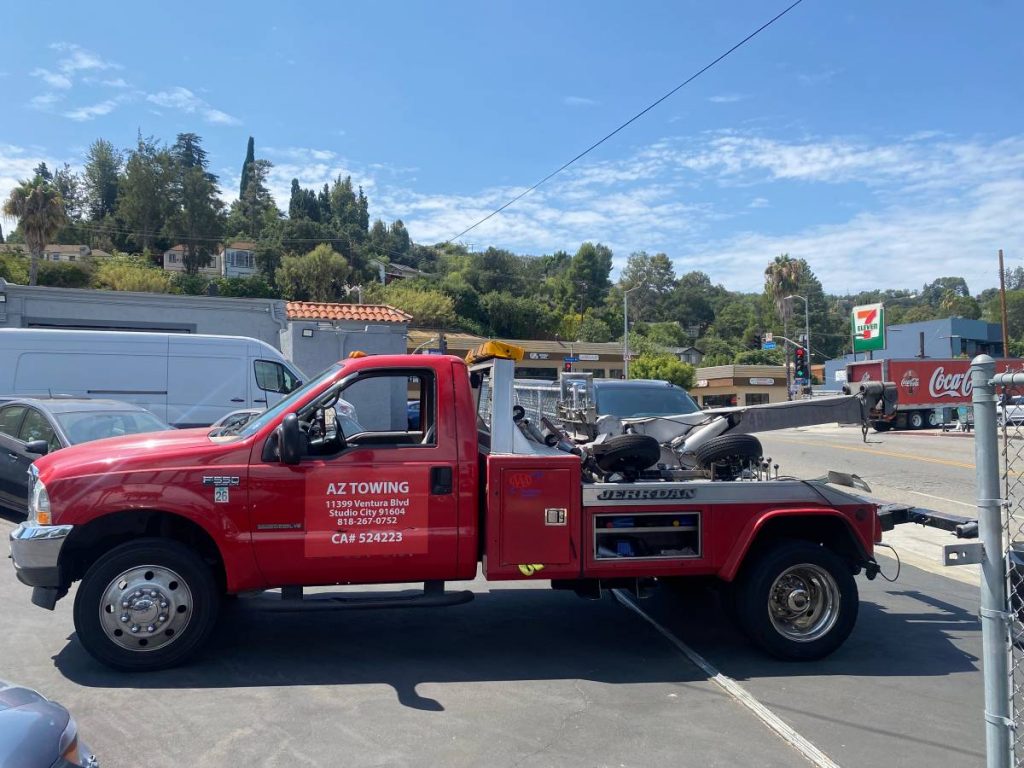 The door says “AZ Towing” with a Studio City address, but there is a door tag from the Arizona Department of Public Safety. It appears that this truck is already on its second life. But that’s not unusual for heavy equipment like this; it gets bought and used by a municipal or state entity until it can’t pass some inspection or other, then bought at auction and used some more by a private company. And why not? Trucks like this have a long half-life; it takes a long time for them to decay.

You never want to have need of a tow truck, but it is nice to know these unsung heroes of the automotive world stand ready to rescue us from our bad decisions, mishaps, and just plain dumb luck. You might not necessarily need to own one of your own, but arguably for some (and I’m not naming names) it’s not the worst idea. So which one will it be?

Pacific Northwest-based self-taught DIYer of all the things. Current fleet: 1971 MGB GT, 1989 Chevy K1500, 2013 Chrysler 300C, 2003 Infiniti QX4, and 1966 Aristocrat Land Commander trailer. Not to mention about 40 RC cars and around 100 model kits...
Read All My Posts »
PrevPreviousCold Start: Nothing About This Feels Right
NextRough Markets In Europe Could Make Your Next Order Of Car Parts More ExpensiveNext