I’ve been on a search for the most rugged camper that I could find. A number of campers claim to be able to go on an adventure, but disappoint when you get to look them over. Of course, there are crazy custom builds, but what I’d love to find is the manufacturer building perhaps the most durable campers on the planet. I’ve found what seems to be a good contender with Australian company Brüder. All of this company’s campers are built to handle way worse than most of the trailers you’d find at a dealership.

Brüder is a newer player in the camper world, but it seems that the company has some good ideas. This company packs its trailers with so much tech and noteworthy ideas that breaking down its entire lineup would probably result in a 9,000-word post. So what I’ll do for this entry is talk about the company’s flagship, the EXP-8. This is supposed to be the pinnacle of Brüder’s prowess, and so much of what’s found here trickles down to the company’s smallest EXP-4. 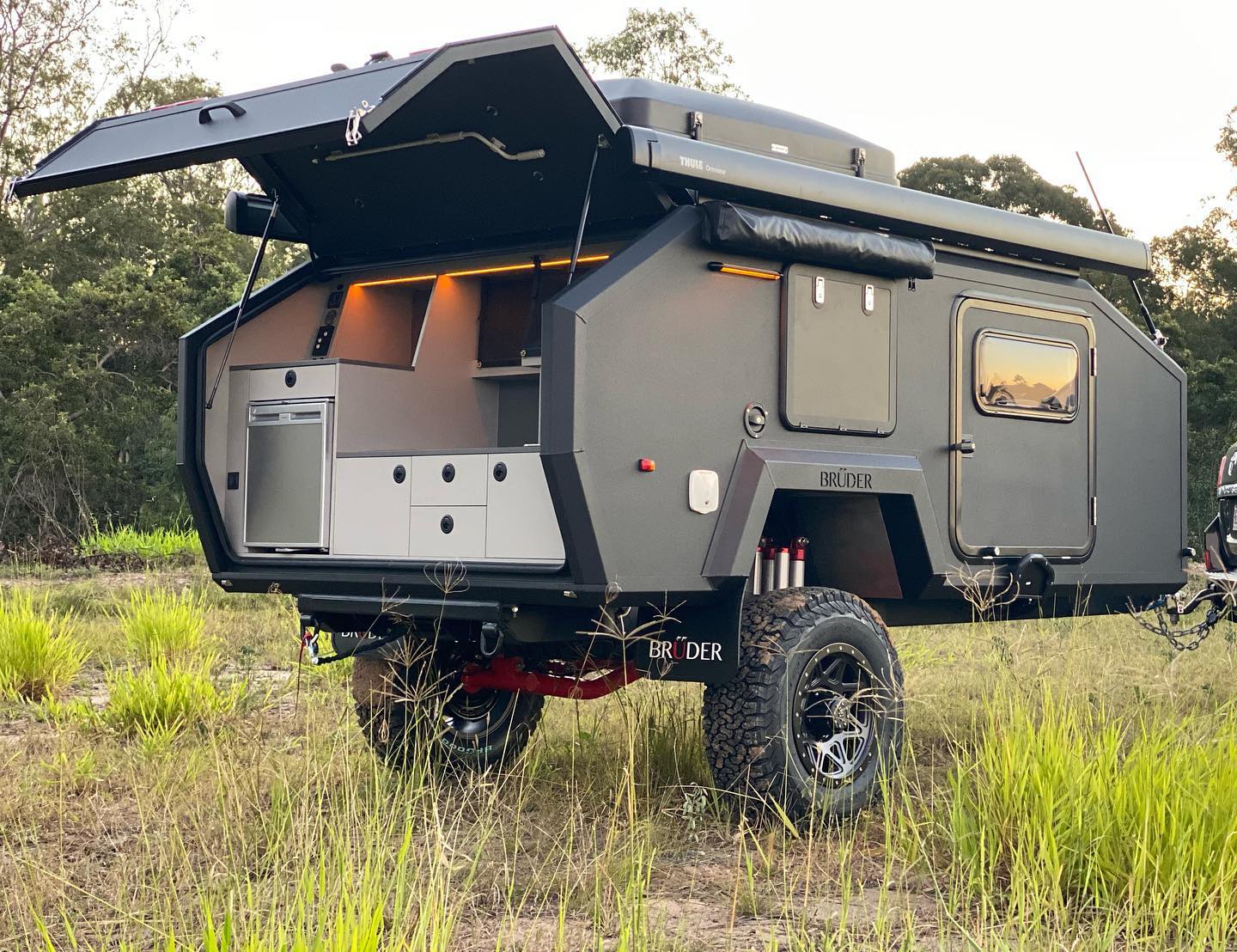 In Brüder’s opening statements about this camper, the company gets right to the point: it’s built to be the ultimate off-road, off-grid camper. They even claim this camper is built for all seasons and all environments. I can’t say that I’ve seen this level of confidence before in marketing, but it seems that Brüder is willing to back it up. 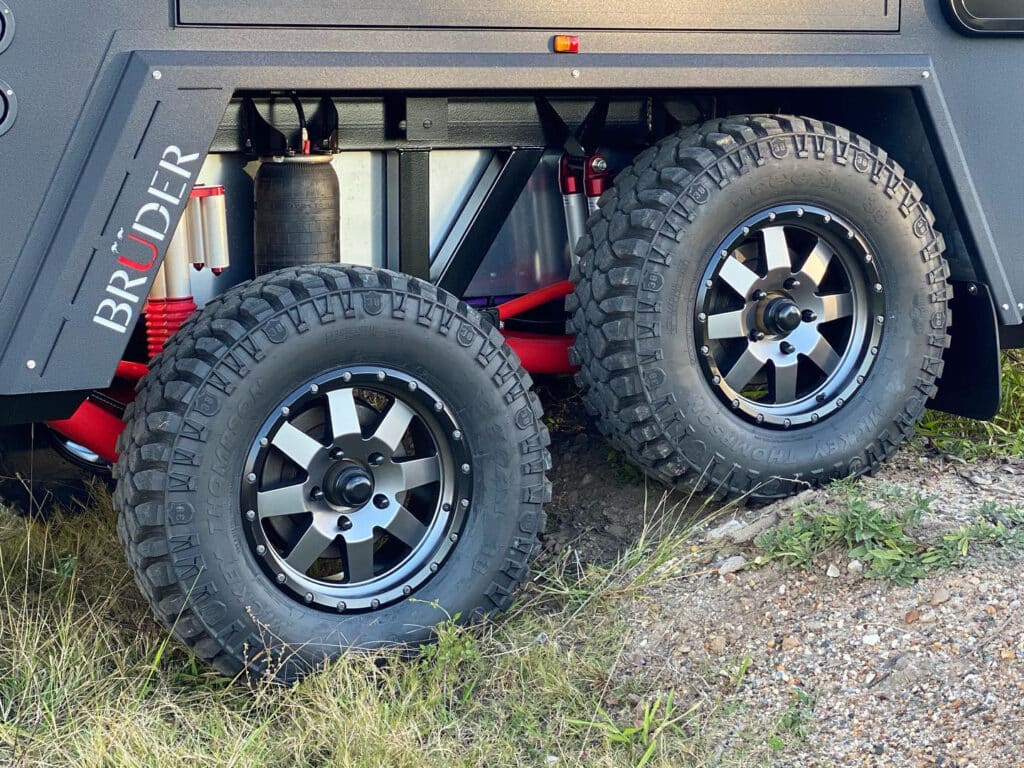 Perhaps just as impressive as the suspension is the fact that Brüder’s trailers have been reviewed off-road, and they sound like they get the job done. Here’s an excerpt from an Expedition Portal review of the EXP-8’s smaller sibling, the EXP-6:

Everything I knew about towing a trailer told me we were screwed. The ledge was too tall to roll over, our speed was too high to swerve, and our angle of approach was a perfect offset to flip the trailer. Even if we miraculously managed to stay upright over the jump, the dip and mud pit on the other side would surely finish the job. I had only a split second to look at Dan, the driver, and mutter an expletive before his 200-Series Land Cruiser struck the edge. The vehicle launched into the air with a shudder, throwing my stomach up into my throat; I found my gaze pinned to the trailer in the rearview. Half a moment later, the Brüder’s front left tire struck, and I held my breath—this was it. I waited for the impending pitch and subsequent roll of the EXP-6, but to my utter disbelief, it never came. The body of the trailer flowed over the ledge, through the ditch, and across the mud pit as if it were on a freshly graded dirt road. I started breathing again and looked at Dan, who moments before I was sure would kill us. He laughed and quipped, “Like I said, you just have to experience it.” I could now see what he meant. 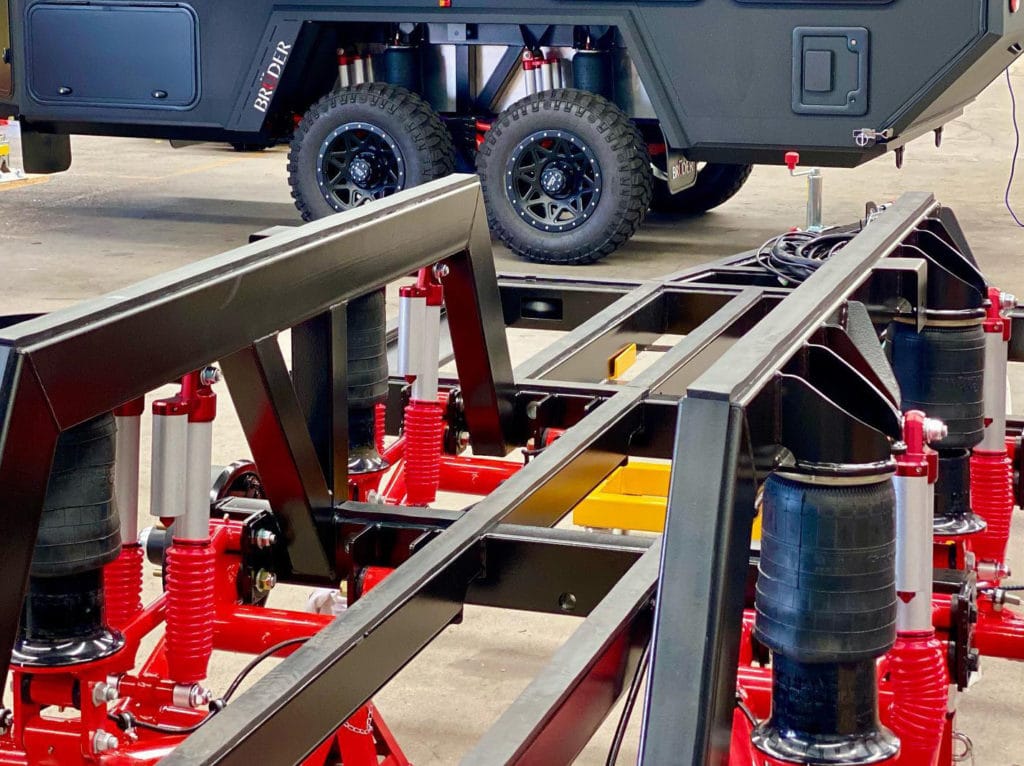 Complementing the suspension is Brüder’s chassis. The company says that its chassis consists of thick, fully welded, and sealed laser-cut sections. In addition to the beefy structure, you get a rear winch, tow recovery points, and hydraulic disc brakes. And it connects to your vehicle through an off-road coupler. Another point of pride for Brüder is how it builds its camper bodies. Brüder says that the EXP-8 features an engineered epoxy-bonded closed-cell composite body construction with wall thickness paired to provide maximum strength, durability, and insulation. 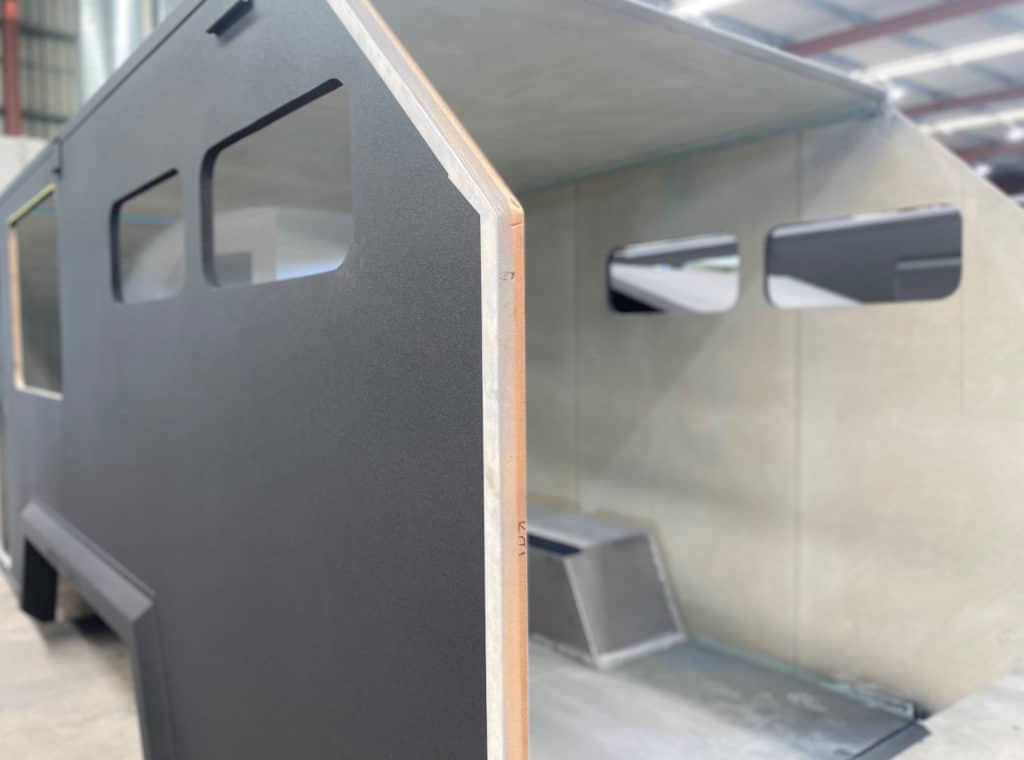 The body on the EXP-8 is said to be good from -22 degrees Fahrenheit and up to 140 degrees Fahrenheit. And Brüder isn’t kidding about this being for all seasons. The roof has been reinforced so that heavy snow loads don’t cause damage.

Moving inside, the EXP-8 is supposed to be a luxury home regardless if you’re at a campground or at the base of a mountain. 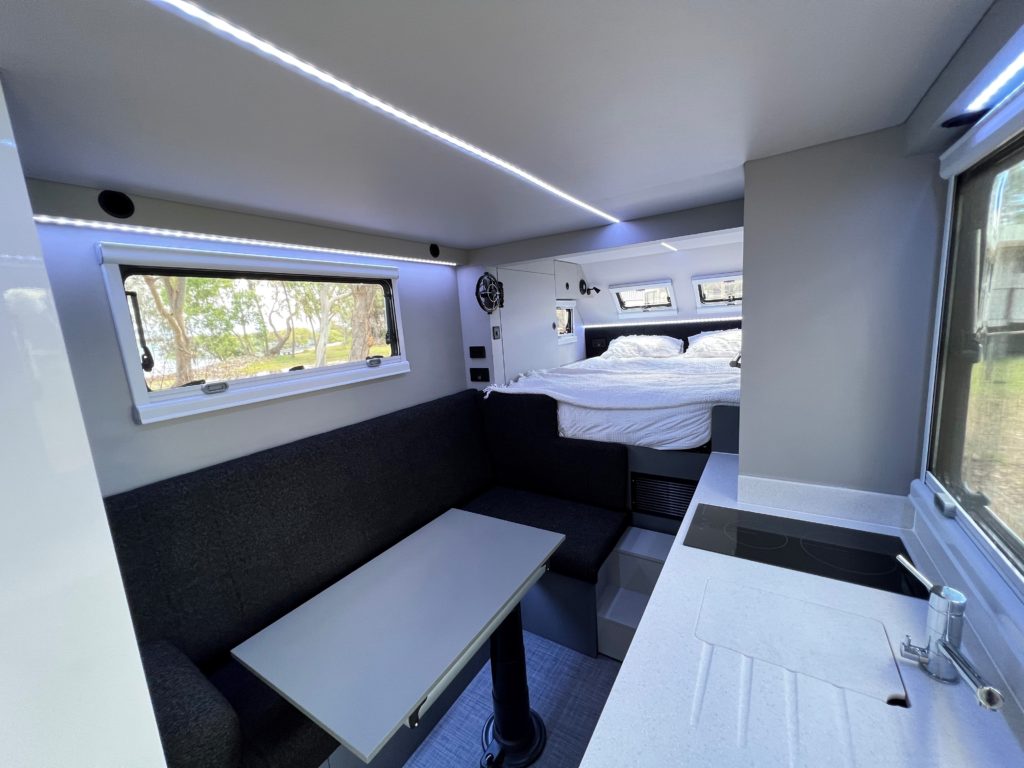 Looking through the features list, you get everything that you’d expect from a camper from a queen-size bed to a wet bath with a shower and toilet. Despite that, there’s still stuff worth highlighting here. You get a pressurized air filtration system meant to keep dust and dirt out of the camper. And speaking of filtration, your kitchen sink also gets a filter.

If wine is your jam, there’s a 10-bottle wine holder that converts into a regular storage area. Brüder goes on to note that this interior has ducted air-conditioning, a diesel heater for keeping you warm, water-resistant flooring, and double-layer windows. 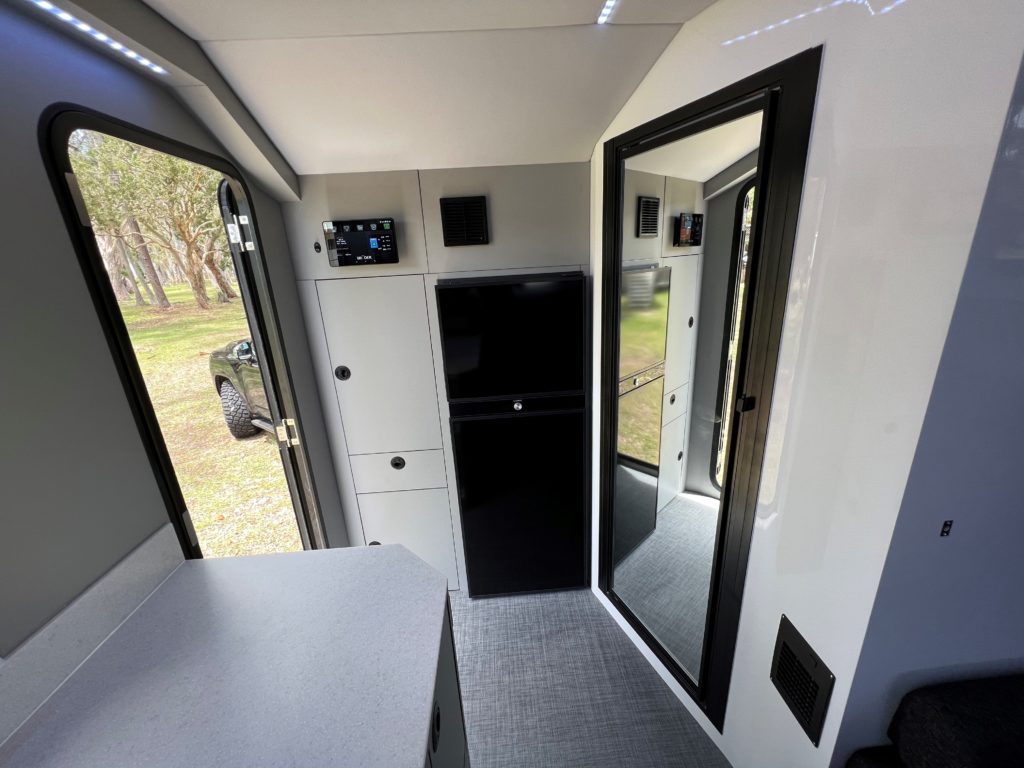 On the equipment side of things, it does appear that these are built with long journeys in mind. You get a 79.25-gallon freshwater tank and a 19.81-gallon grey tank. Water lines are kept warm and the trailer can pressurize its own water in the event that you get water from a remote source. Power comes from a 16.7KWh battery hooked up to a 5000W inverter and a 1600W solar bank.

Power management is handled through a touchscreen and for a sort of silly feature that I love, your interior lighting is RGB. 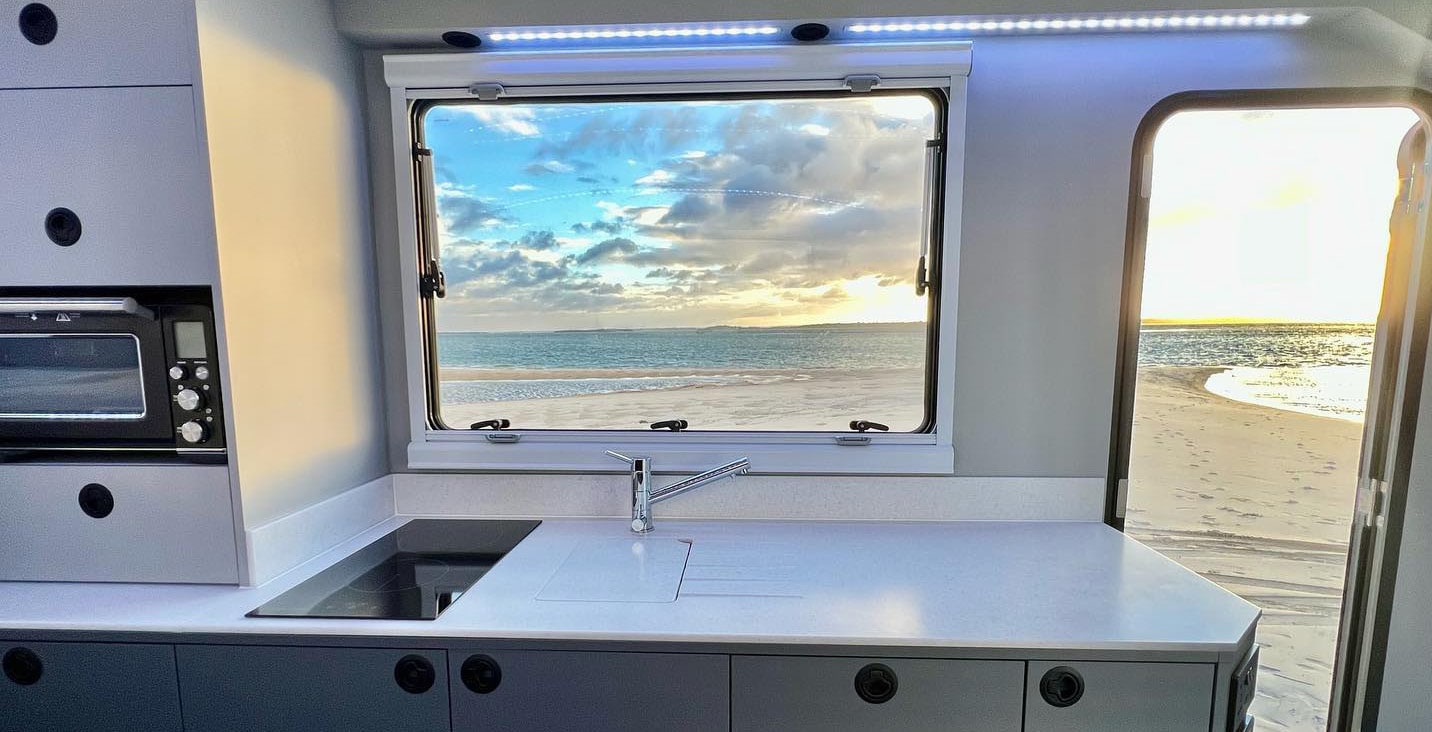 As a reminder, this is everything that you get right out of the box, and I didn’t touch a number of other features on the list. If you want even more features, Brüder offers options like a leather sofa, 37-inch mud tires, a second awning, a washing & drying machine, a generator, a microwave, and apparently a system to charge EVs. If you’re a caped crusader, you can also have it in black.

The company has a rugged origin story to go with its products, and it starts with two brothers named Dan and Toby. They say their father was a pilot in Northern Australia, and when he wasn’t flying a plane, he was taking his sons on outdoor adventures. The family traversed everywhere from the northern wilderness to the southern ski fields, learning about camping and exploration along the way. 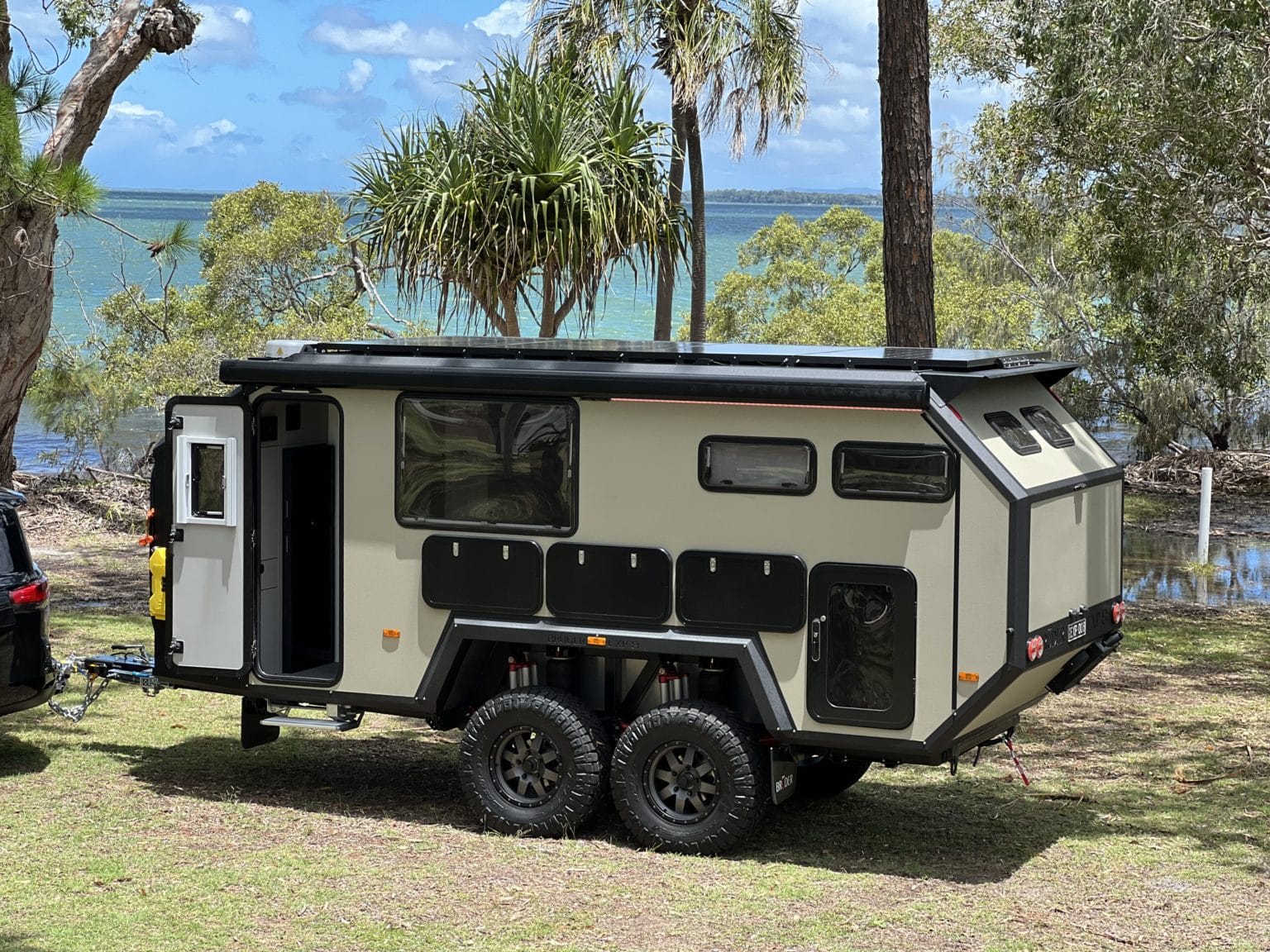 Apparently, the father did this when the sons were as young as six weeks old, so camping is pretty much a family tradition for them. As the brothers grew up, they spread their wings and went exploring on every continent and through different climates. Eventually, the two decided to take what they’d learned through all of their adventures and turn it into a camper manufacturing business. Then, Brüder—German for brother—was born. The company fired off its first trailers in 2016 and now it has a whole lineup.

Now for the catches, and there are a few. At 7,716 pounds unladen, the EXP-8 isn’t something that you’ll be towing with a Jeep or a small pickup. It also starts at $180,000, or $199,900 if you want it in black with most of the options list coming standard. But for once, I think I can see where that money is going. If these are as good as they appear, then you’re getting a trailer that will survive what far cheaper rigs may fall to.

I Took A Close Look At Some Lightweight Off-Road Campers That Actually Look Badass. Here’s What I Saw

Mercedes is a lifelong fan of all things powered by an engine. When she isn't driving one of her five Smart Fortwos or her 14 other vehicles she could be found in the cockpit of a Cessna 172 or perhaps swimming in any body of water that she could find. She also has a deep love for buses of all kinds. Please send her buses. mercedes@theautopian.com Instagram: @mistymotors Twitter: @Miss_Mercedes30 Facebook.com/neonspinnazz
Read All My Posts »
PrevPreviousThe Chevrolet Bolt EV Has Once Again Been Recalled Due To Fire Risk, But The Cause Is So Much Weirder Than A Battery Short
NextYour Scientists Were So Preoccupied With Whether They Could, They Didn’t Stop To Think If They Should: Nissan Z Becomes A CrossoverNext