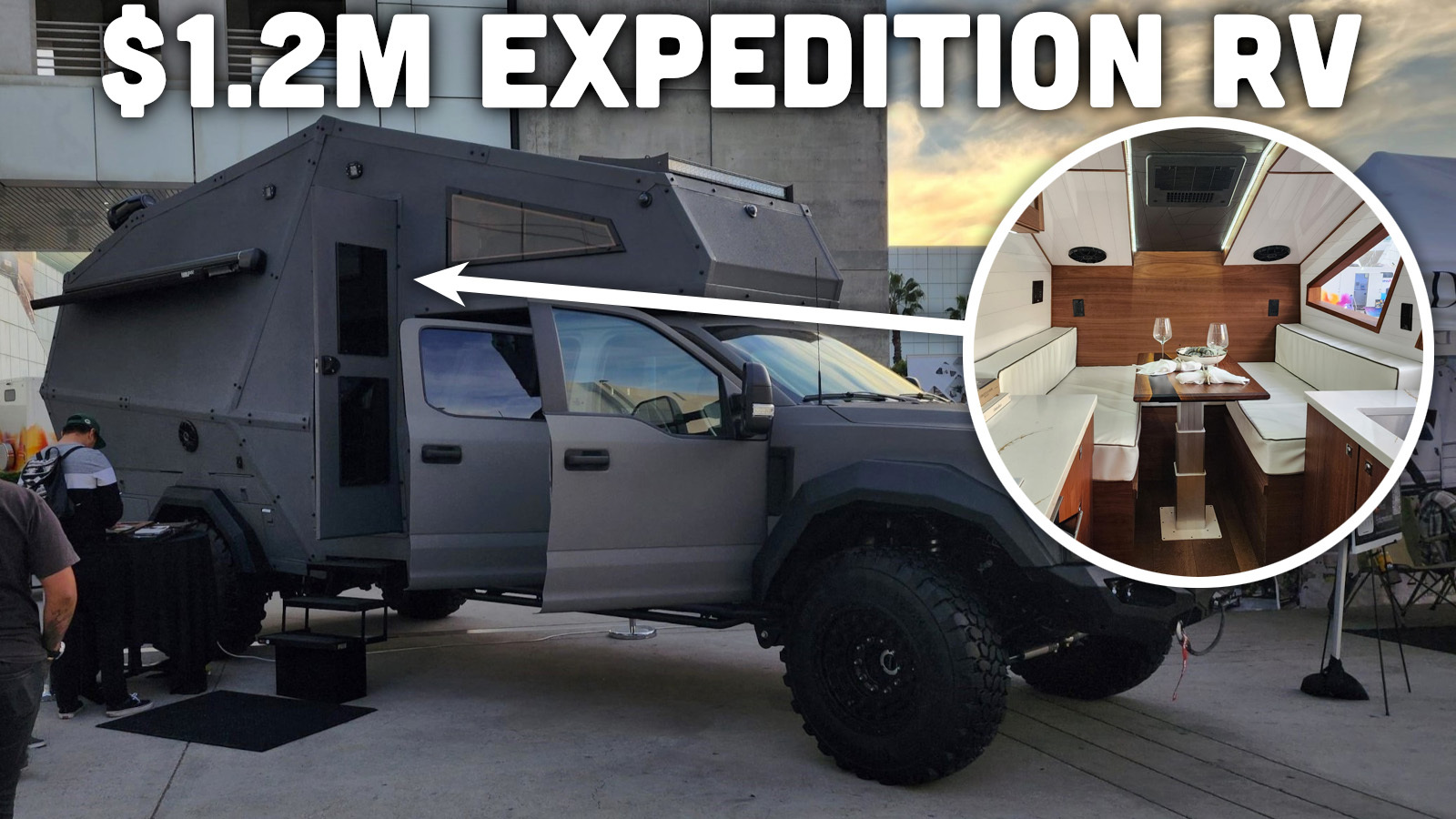 While David Tracy and I toured the 2022 Los Angeles Auto Show, we witnessed something a bit unexpected. Parked among the food trucks outside and far away from all of the other exhibitions was an RV so large that it makes sheds look like jewelry boxes. RV startup 27North wants to sell you this 15,800-pound beast of a camper, which comes complete with a radar, its own drone, a yacht-inspired interior, and more bedliner than you can handle. The 2023 27North Ascender 30A is an up to $1 million rig that’s basically a command center hanging off of the back of a Ford F-550.

27North is a relatively new player in the RV space. The company is the creation of Pavel “Paul” Bosovik. As 27North’s site says, he has been a lifelong businessman. At 10 years-old, Bosovik sold bookmarks to his classmates for 25 cents each. Later, he would meet and marry Nina, and get into the residential construction industry. The company’s site elaborates:

In 1999, 27North, Inc founder and CEO, Pavel “Paul” Bosovik, and his family were granted refugee status in the United States after fleeing religious persecution in Ukraine. None of them spoke English when the family moved from Ukraine to the United States, but that did not stop their drive to be successful in the US. Their father took a job as an over the road truck driver, a job that did not require fluency in the English language, to provide for his family, while their mother helped her family adjust to their new life in America. 23 years later, the Bosovik family, consisting of mom, dad, and 11 brothers and sisters, still strive for success, charity and a strong sense of community.

Having seen his parents give up their livelihood in Ukraine to provide their children with opportunities they never had, Paul was determined to make their dreams for him come true.

Eventually, Bosovik felt like he needed another change in career, and he took notice that there weren’t many work options in his community. That’s when he found himself in the RV space. In 2017, Bosovik sold his first RV to a family in Rogersville, Missouri. A year later, he opened up an RV parts and service shop. 27North was established in 2021 to expand on Bosovik’s goals. Starting off as a van conversion company, 27North says that its goal is to become the go-to camper conversion company in America. To help it get there, 27North converts all kinds of vans into affordable or luxurious campers. And its latest offering is incredible. This is the 2023 Ascender 30A. 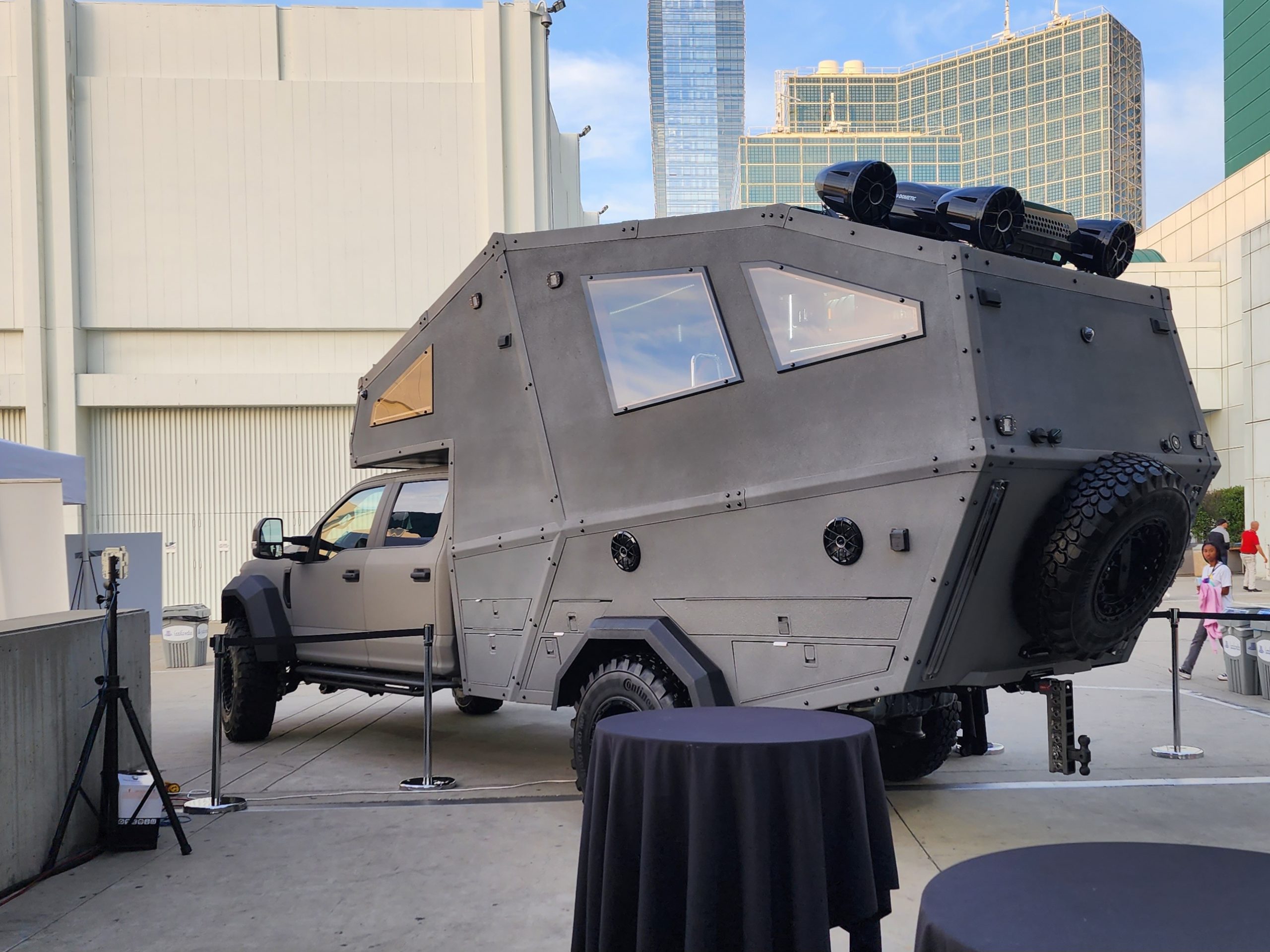 At its heart, the Ascender 30A is a Ford F-550 Super Duty. Under the hood is a 6.7-liter Power Stroke V8 Turbo Diesel making 330 HP and 825 lb-ft torque. This truck would normally be found at job sites or hauling huge loads, but here, it’s a $750,000 expedition camper that can be optioned to $1.2 million or even higher.

We crawled under the Ascender to get a look at its hardware. There are two things worthy of note under here. 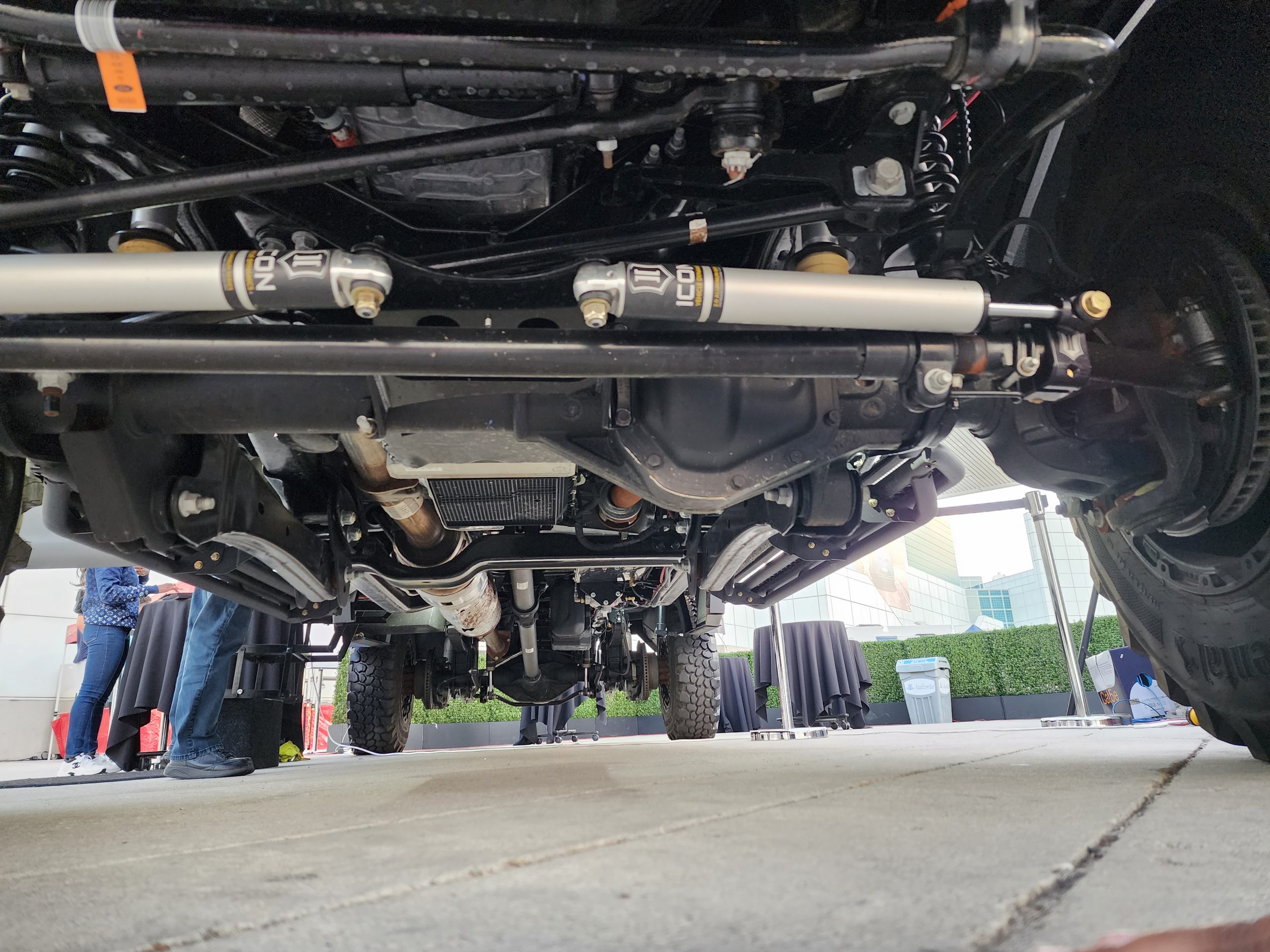 One is the fuel tank. Ford sells these with a fuel capacity of up to 66.5 gallons. 27North doubles up on this, offering you a 130-gallon fuel capacity. The company says that this should be good for up to 3,000 miles of travel on a single fueling. Though, looking at the cost of diesel at stations near my apartment, those fills would cost a hefty $750. Though, I reckon that the potential buyer of this isn’t going to care about fuel bills.

Also underneath the truck you can see that 27North deletes the dual rear wheel setup that the F-550 normally has. This results in the rear axle looking a tad awkward. 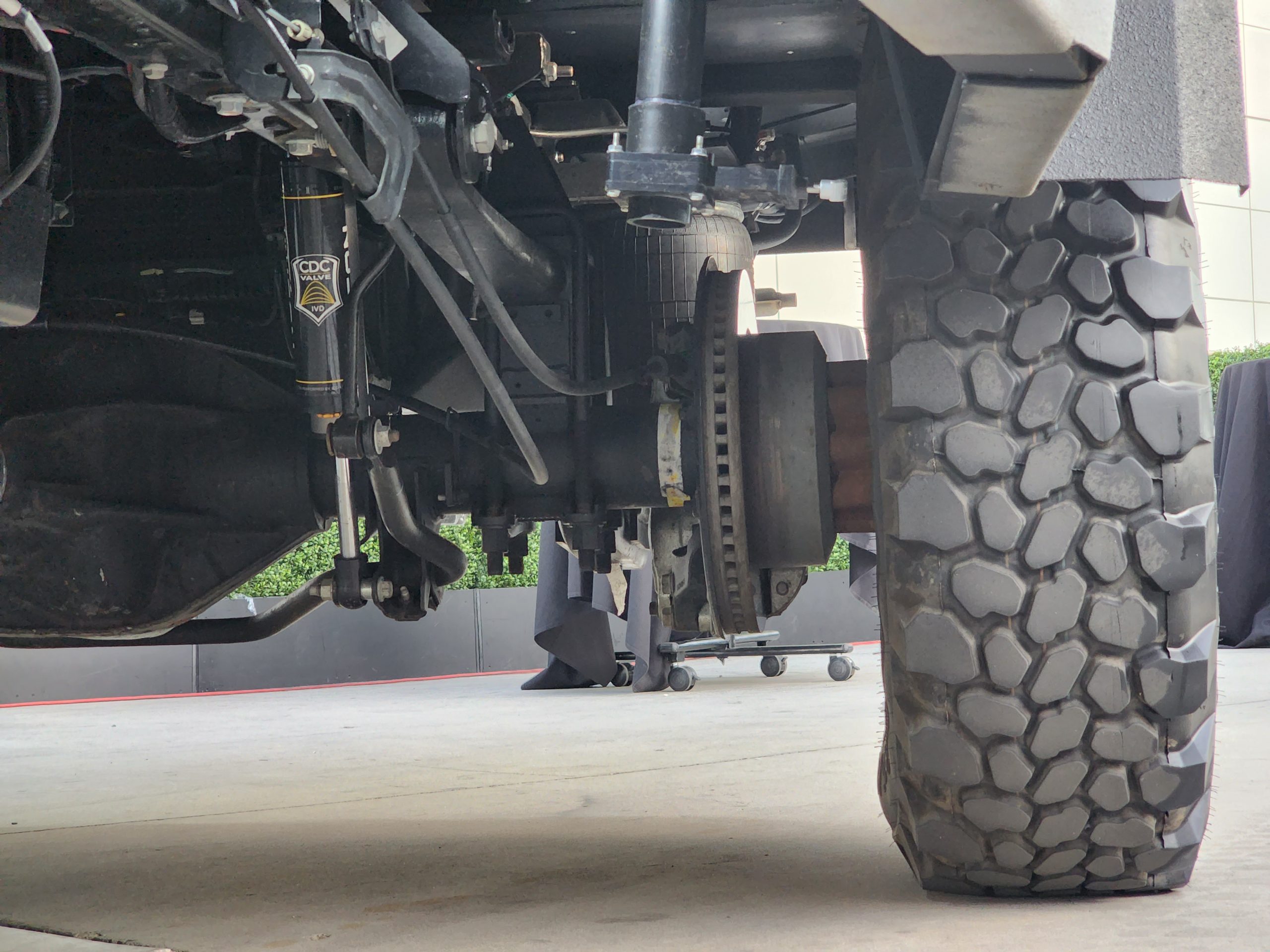 Crawling back out to check out the rest of the truck, there’s quite a lot going on. 27North says that it sources its 20-inch bead-lock wheels and 41-inch tires from the same place that militaries and police forces get their wheels from. 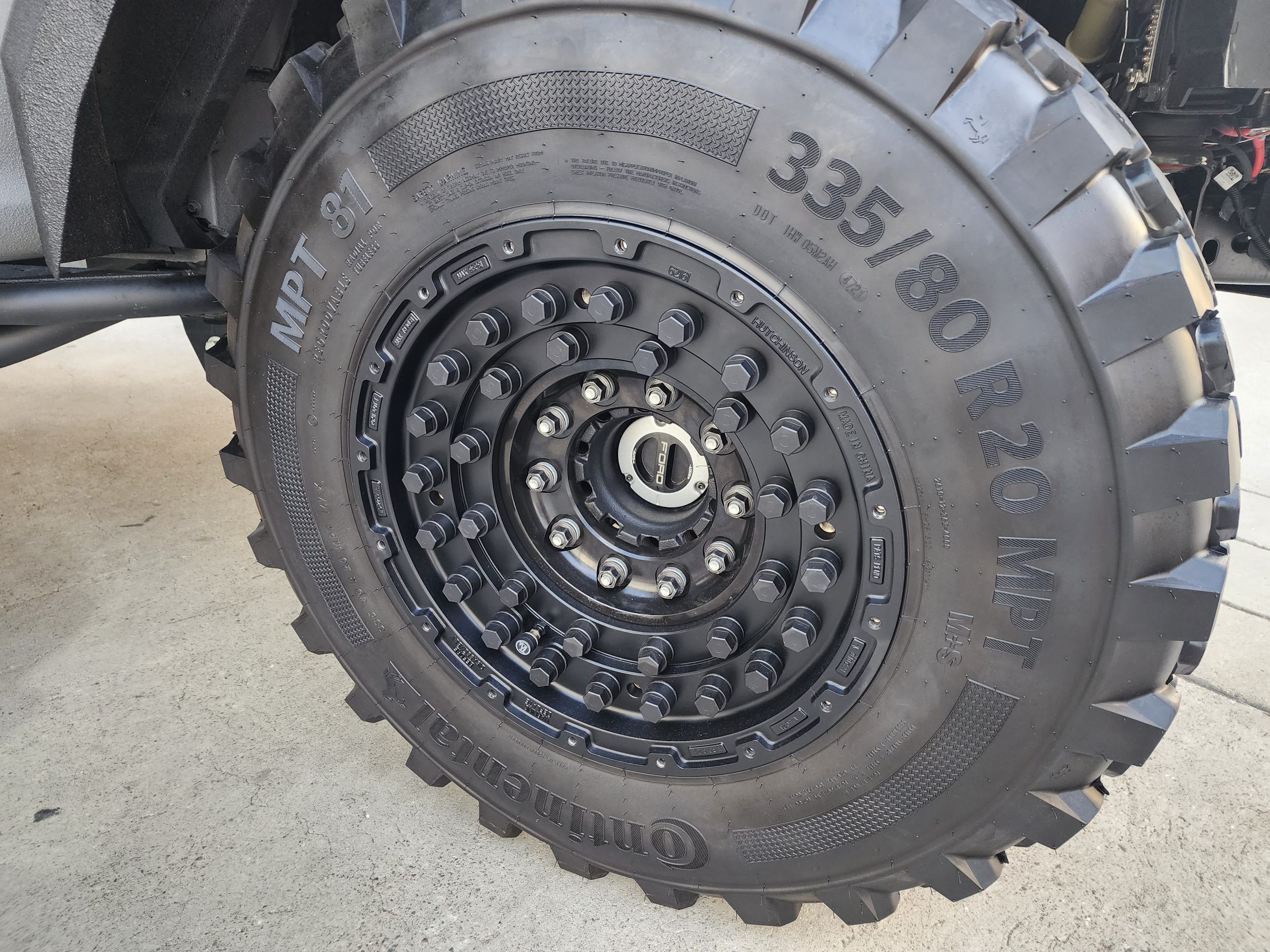 Looking around, we found various parts of the exterior covered in relatively thick steel plating from the flares to the big front bumper. And the whole rig from grille to camping unit is covered in thick truck bedliner-like coating. This coating is comprehensive, too, with the inside of the doors covered in the stuff, too. 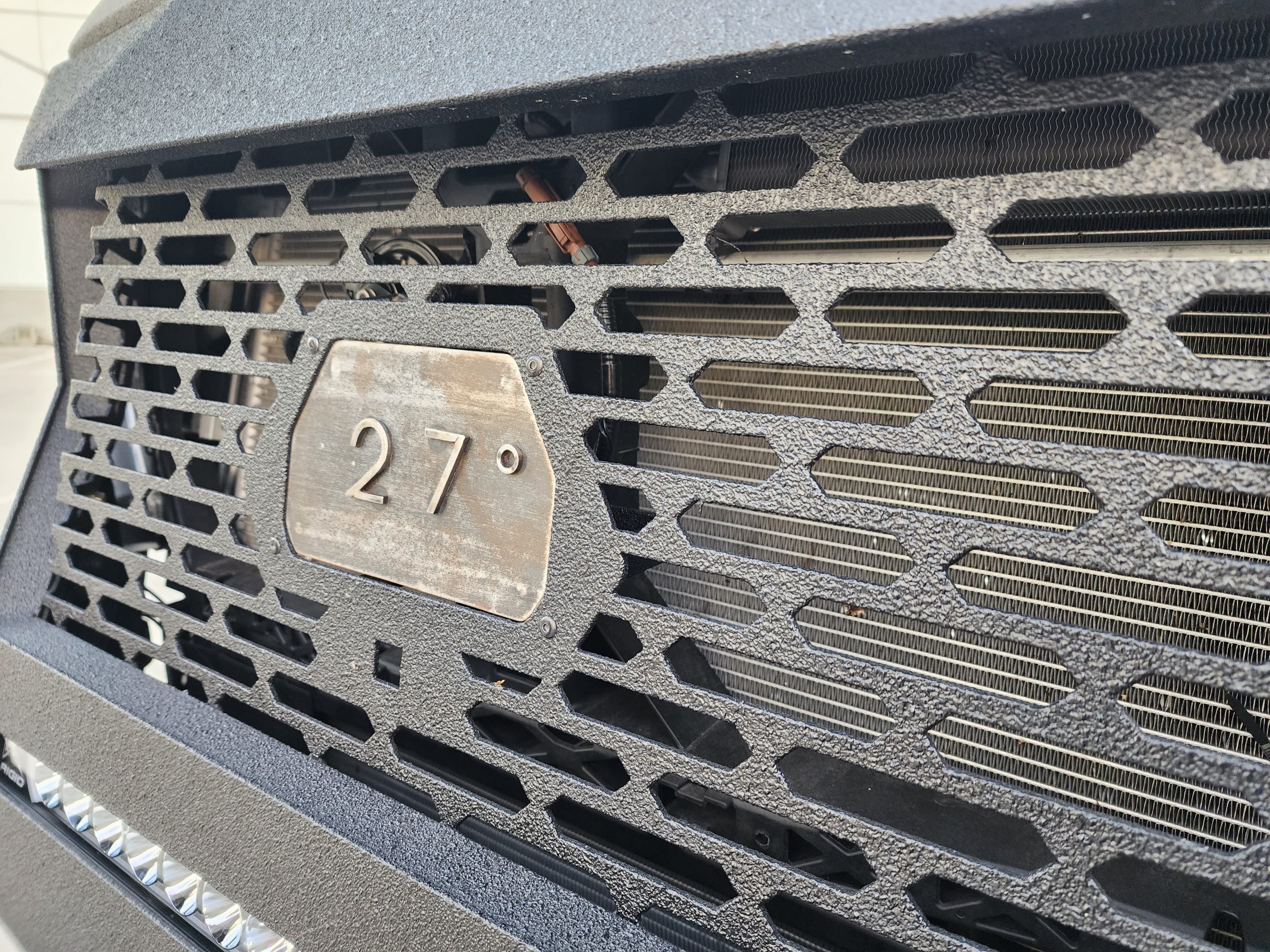 Aft of the cab is a custom-built camper. On the outside is more of that bedliner, plus 12-inch marine tower speakers. You also get a 12-foot awning and absolutely massive taillights. Pictures don’t do it justice; this thing is absolutely colossal, looking like a military vehicle. 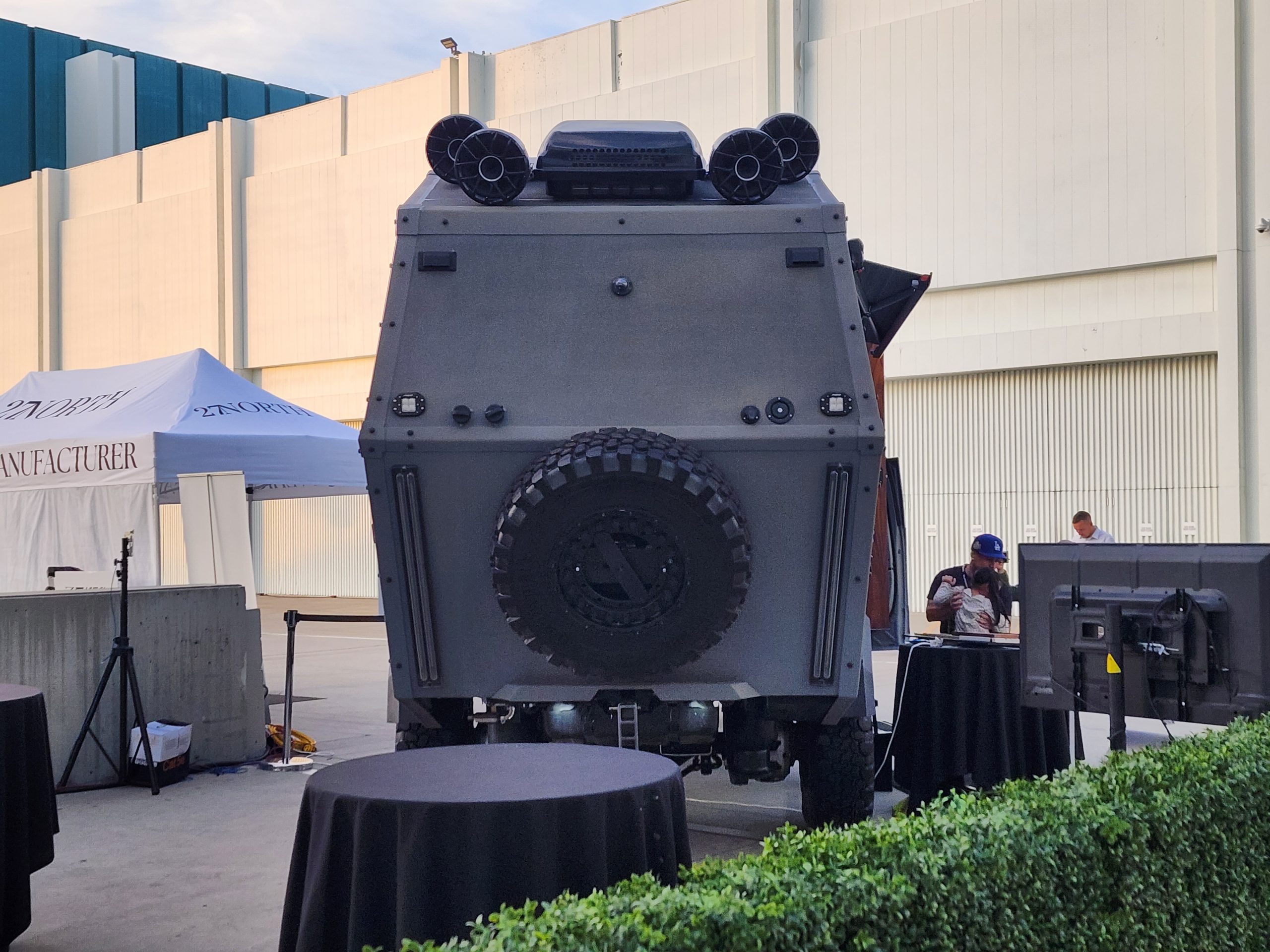 Walk through the door and you’ll be greeted by an interior befitting the rig’s price tag. There’s a king-size bed in the overhang above the cap, a decent-size bathroom, a dining room, and a galley kitchen featuring an induction cooktop and a large refrigerator. 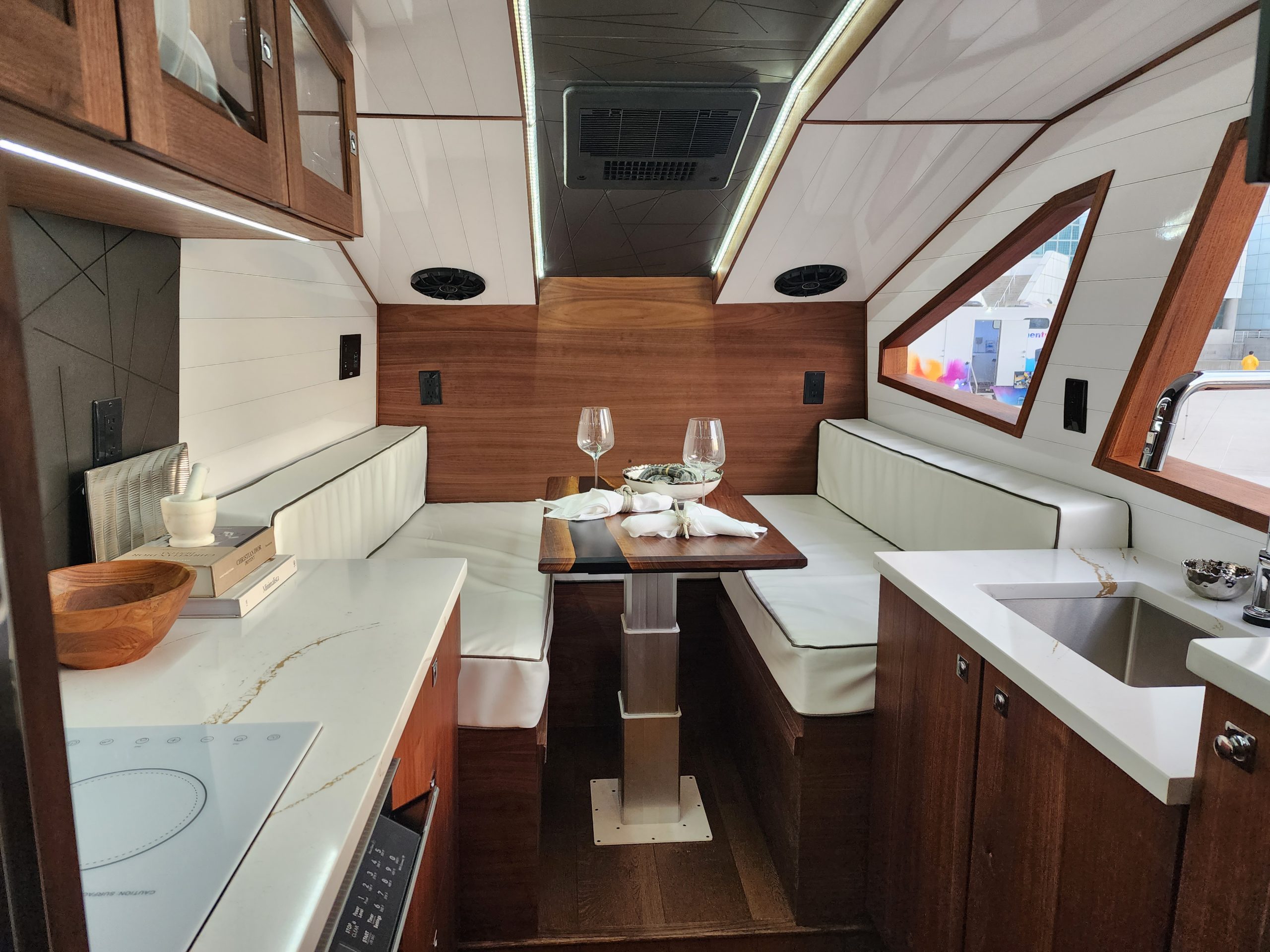 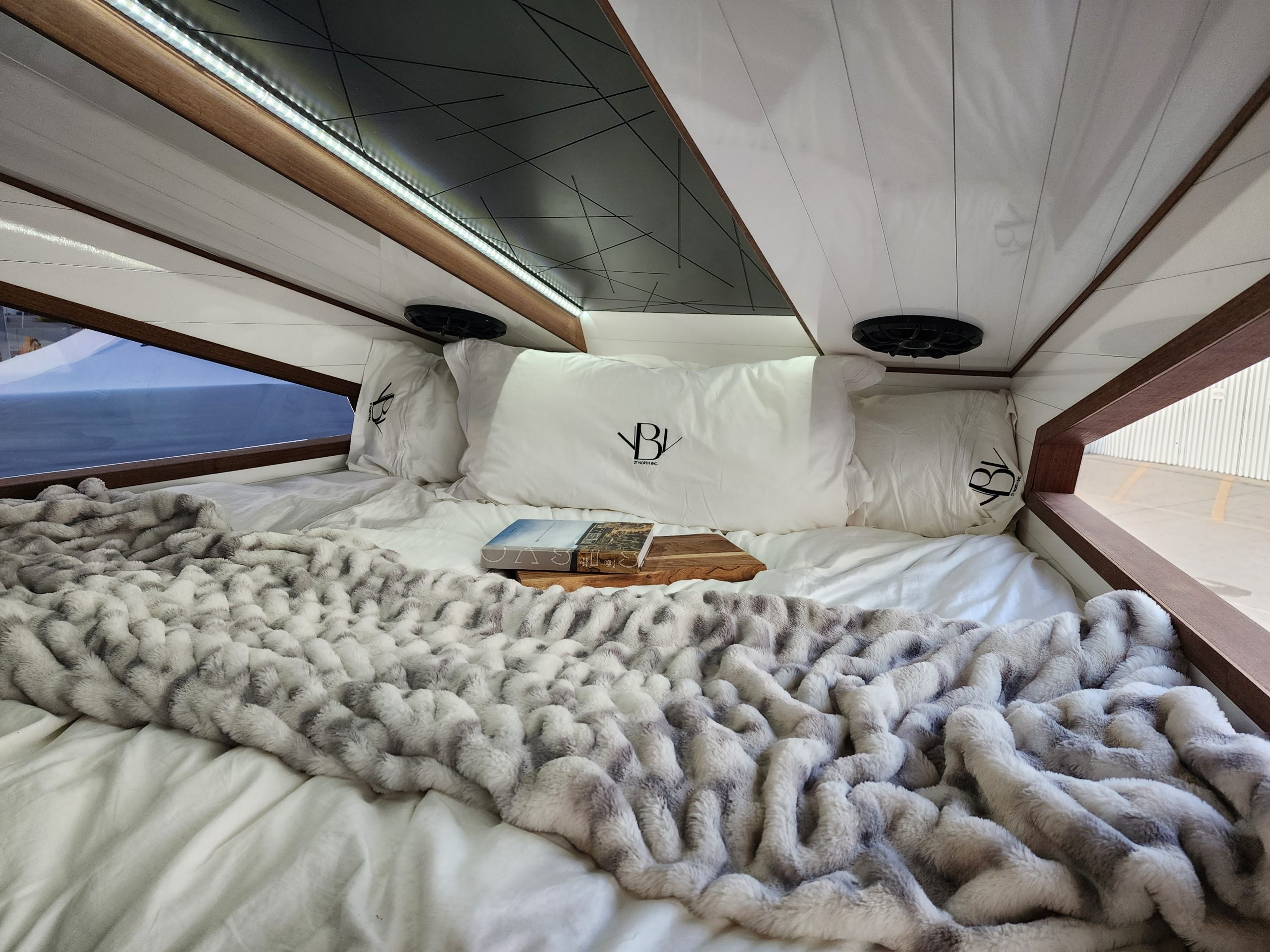 The interior is trimmed in a thick walnut and parts like drawers and cabinets have some real heft to them. 27North says that the rig has a 150-gallon water tank and a 55-gallon gray tank. It’s unclear if a black tank is included.

On the technology side, the Ascender 30A is secured with a GOST security system. GOST’s systems are usually found in boats. They give you all kinds of sensors like sensors for motion, the freezer, doors, hatches, and more. On top of this, your Ascender 30A will come with a deployable drone and there’s a 25-mile radar onboard. It’s unclear what you’ll use the drone and radar for, but it definitely adds to the mobile command center vibes of the Ascender 30A. 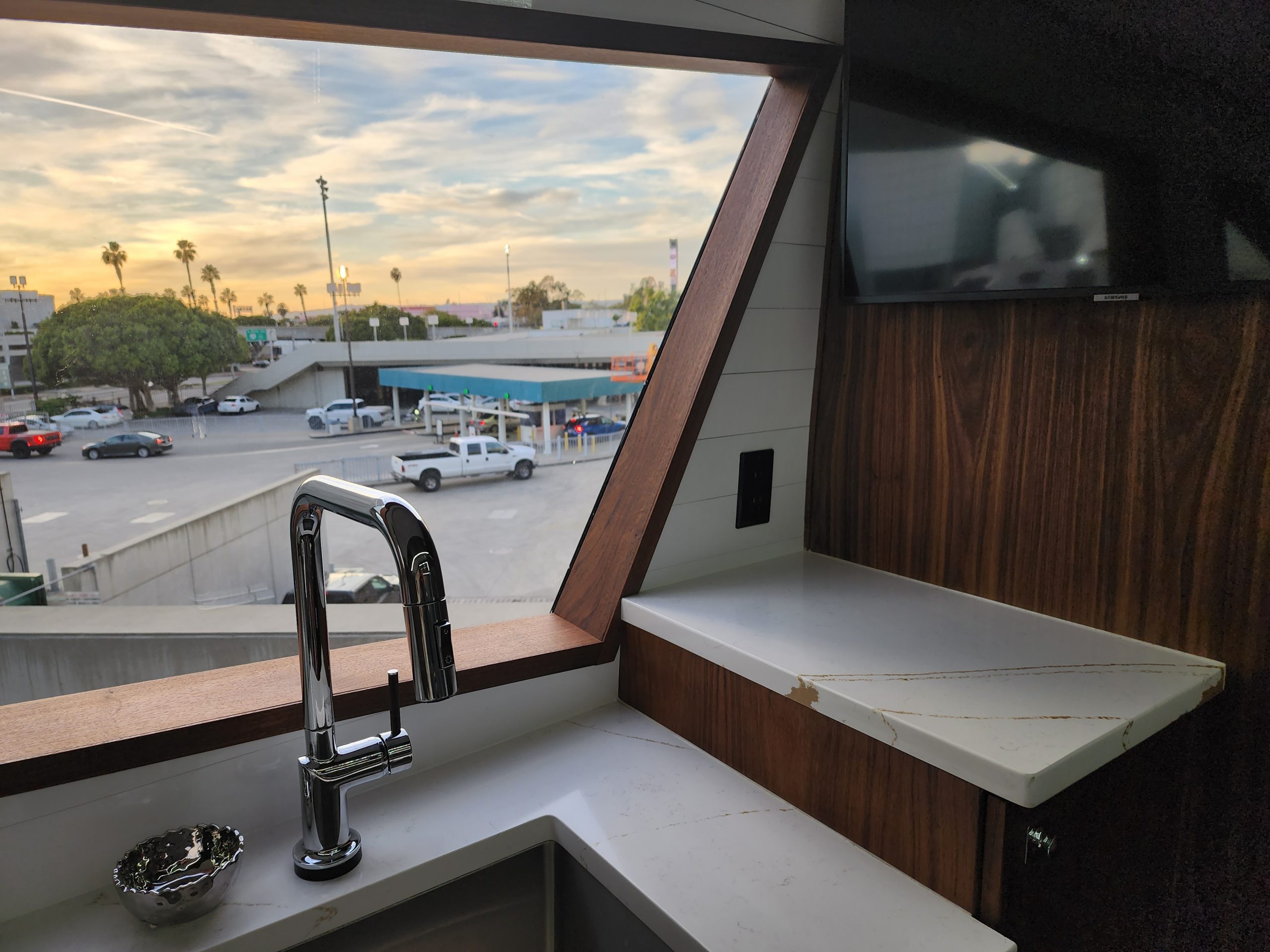 Additional technology comes in the form of four heavy duty Lithium-Iron Phosphate batteries fed by two alternators and 1,200W or 1,300W of solar (27North’s site lists both). And the whole system can be controlled by an iPad, like other modern RVs. You get all of this for a starting price of $750,000 in a vehicle weighing in at 15,800 pounds empty. 27North’s people tell me that you can then further option these out to a million dollars and higher. The one at the auto show was one of seven created just far, and it came in at $1.2 million. 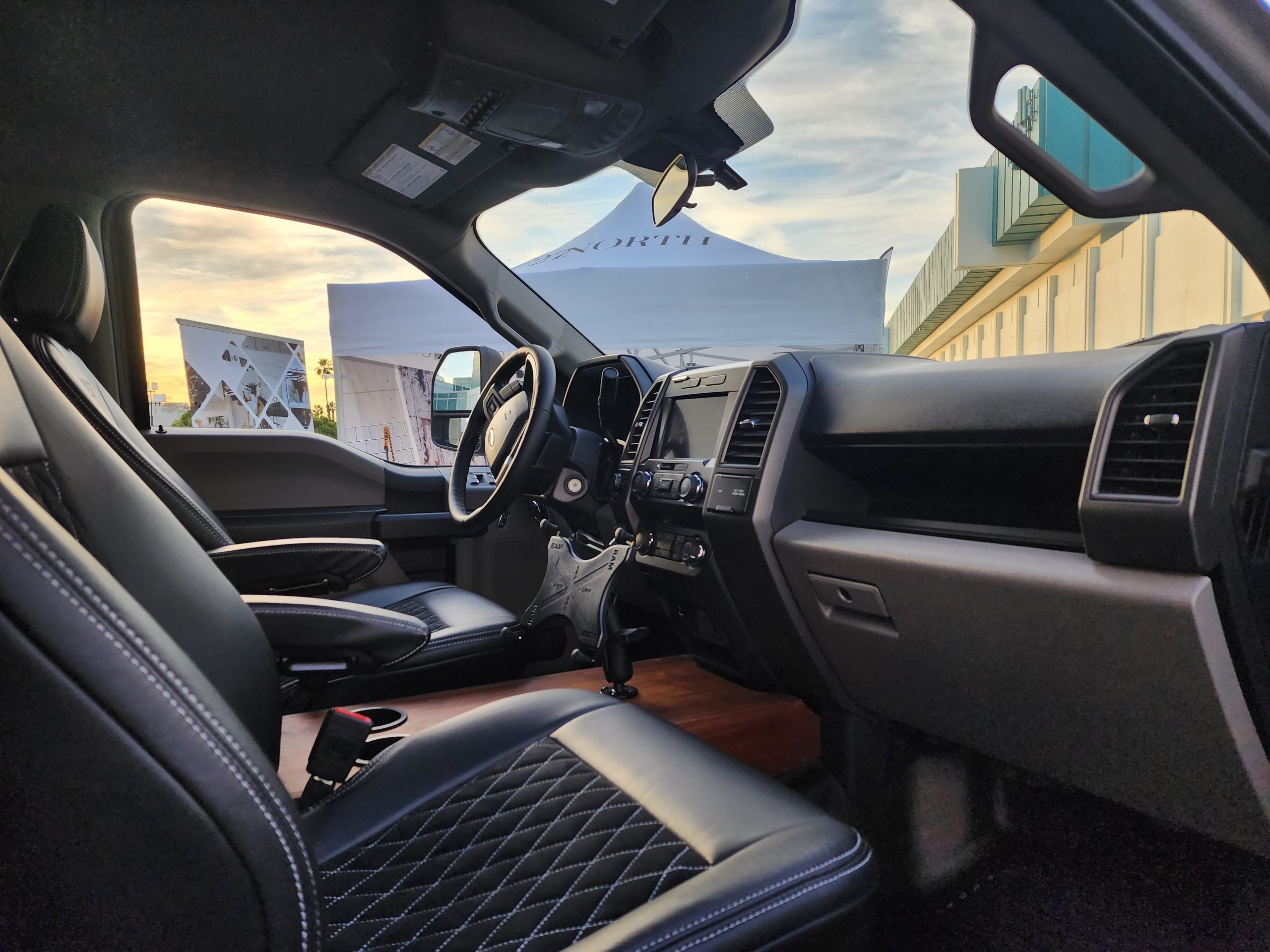 27North touts the Ascender 30A as a vehicle for any remote place on Earth.

Given its equipment, I have no doubt that the RV can go places that few other Ford F-550s will ever find themselves. Though, the sheer size of this beast does mean that your path shouldn’t include tight trails or low clearances. It’s also short on underbody protection, too.

Still, this seems like glamping at some of its finest. 27North tells me that it’s building these right now, and buyers have to contact the company to get started. 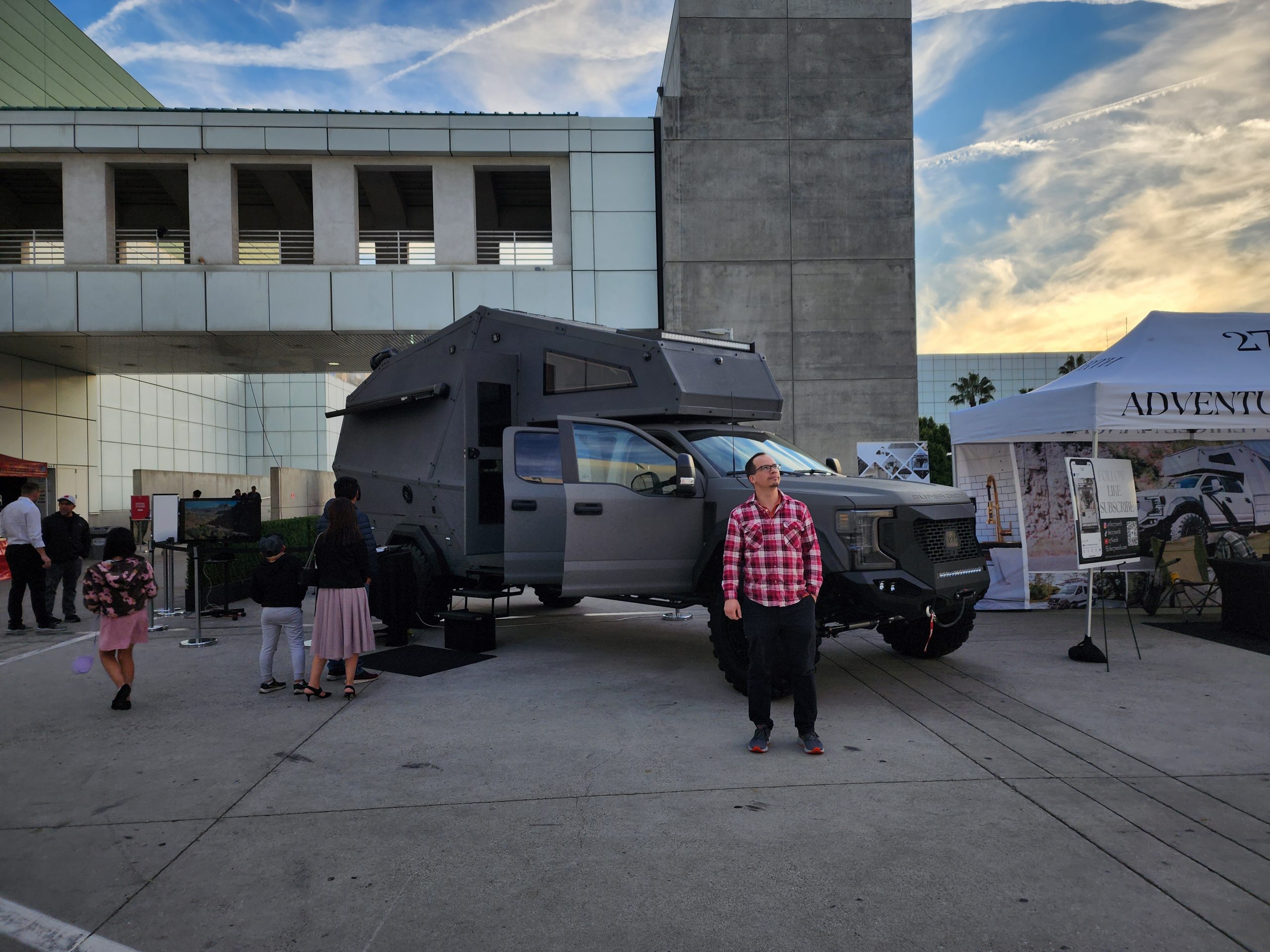 Mercedes is a lifelong fan of all things powered by an engine. When she isn't driving one of her five Smart Fortwos or her 14 other vehicles she could be found in the cockpit of a Cessna 172 or perhaps swimming in any body of water that she could find. She also has a deep love for buses of all kinds. Please send her buses. mercedes@theautopian.com Instagram: @mistymotors Twitter: @Miss_Mercedes30 Facebook.com/neonspinnazz
Read All My Posts »
PrevPreviousChevy’s Answer To The Tesla Model 3 Looks Damn Good
NextThe BMW 3.0 CSL Is A Slightly More Powerful M4 That Maybe Costs $750,000Next