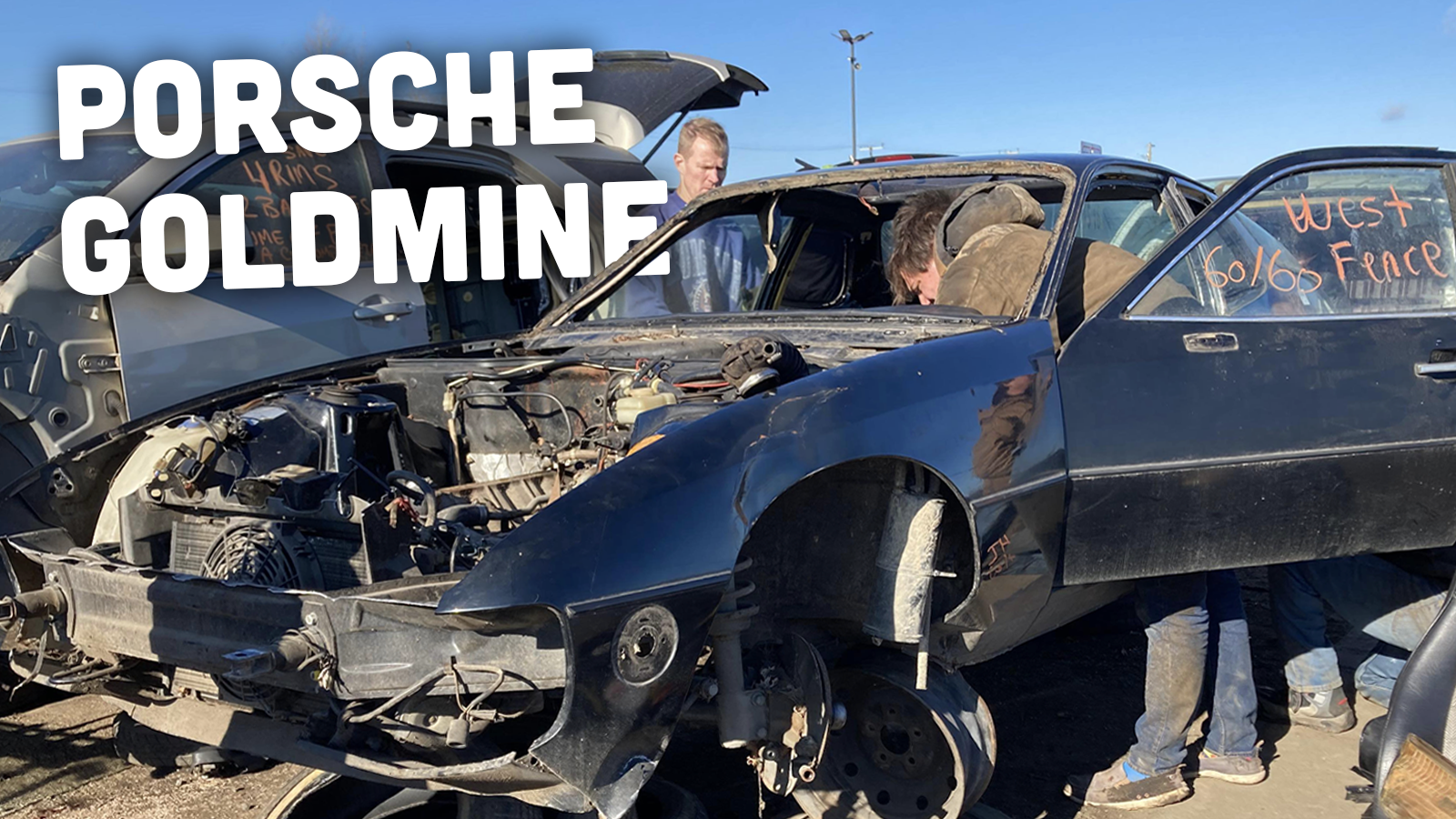 This past weekend was the legendary “60 for 60” event held at a junkyard north of Detroit. The event allows people to buy for $60 literally any part/parts they can carry 60 feet. Last year, someone carried a 1,000 pound axle, another guy carried multiple engines on his back, folks carried hoods and doors and leaf springs — it was madness! This year was, too, and though I wasn’t there, I’m going to highlight Autopian reader Karl’s haul: An absolute goldmine of Porsche 924 parts.

Ooh boy. These past couple of weeks out here representing The Autopian at the LA Auto Show have been great, but a bit weird. I haven’t wrenched in weeks, so my hands are clean. I’m wearing stain-free clothes. I’ve even gotten a haircut. Now I’m looking for apartments that don’t allow me to fix cars in their garages. I’m driving a rental car that doesn’t leak a drop of oil! Am I living a lie? Or was there always a cleaned-up version of me deep down, below that thick corroded upper crust? Or, perhaps, more likely, is the ol’ me going to be elbow-deep in a Nash Metropolitan engine soon, with parts strewn about my otherwise empty apartment?

Anyway, I’ve missed you all over the Thanksgiving break, almost as much as I missed not having attended the greatest junkyard event on earth: U.S. Auto Parts of Sterling Heights’ “60 for 60” event, which promises a price of $60 for anything you can carry on your back for 60 feet. Here’s a look back at last year’s event:

Since I’ve gone full Hollywood, I missed this year’s wrenchfest, but here are some videos of folks trading cheap parts for a chiropractor visit or six:

There are some absolute beasts in these clips:

Anyway, in addition to mentioning this year’s 60 for 60, I’d like to highlight a haul from longtime reader and auto enginerd Karl Woods. Karl owns a Porsche 924 that started out looking like this: 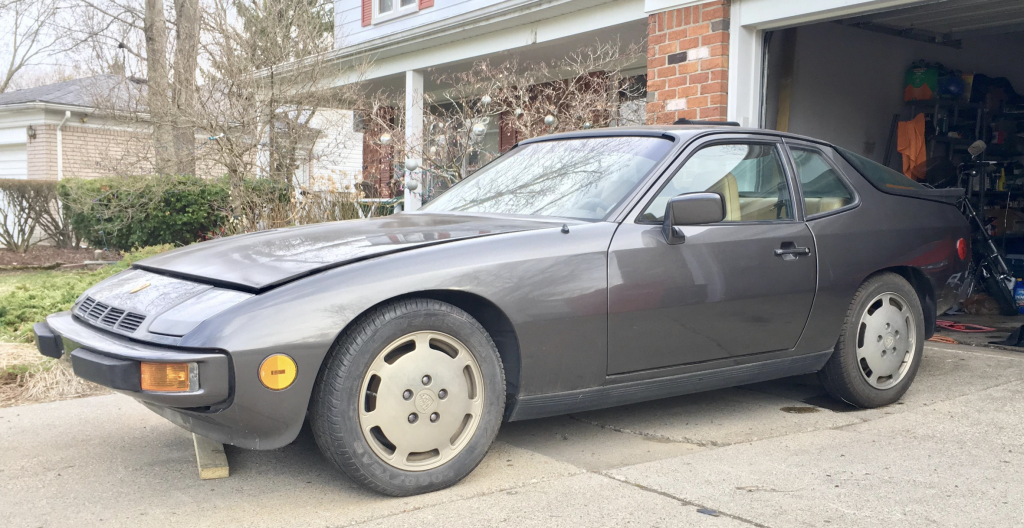 And after a $2,500 Maaco paint job and lots of other work, now looks like this: 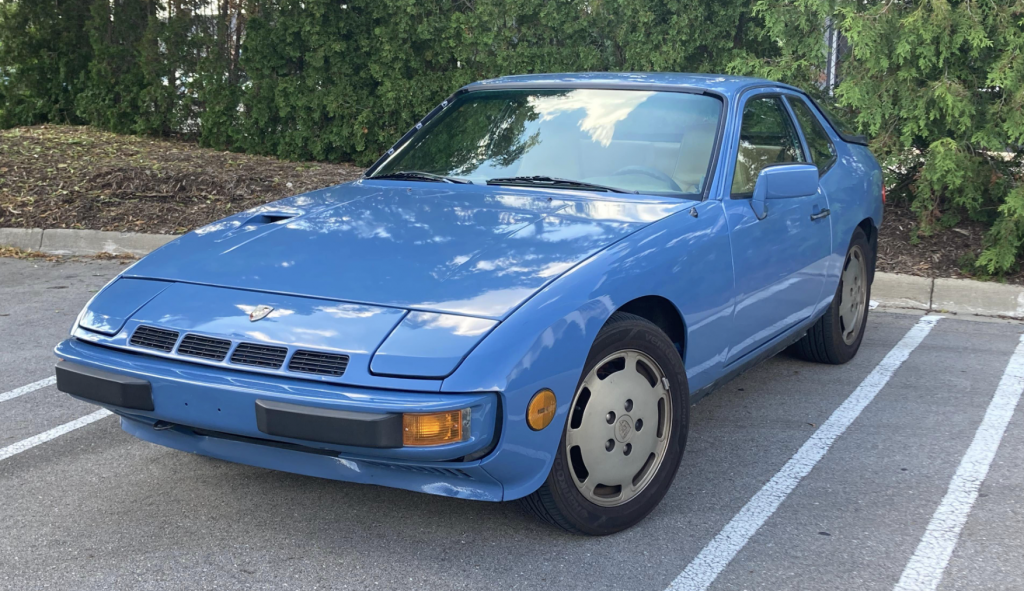 It’s gorgeous. Though you know what isn’t gorgeous? The Porsche’s interior, thanks to these nasty cracked seats that don’t match anything: 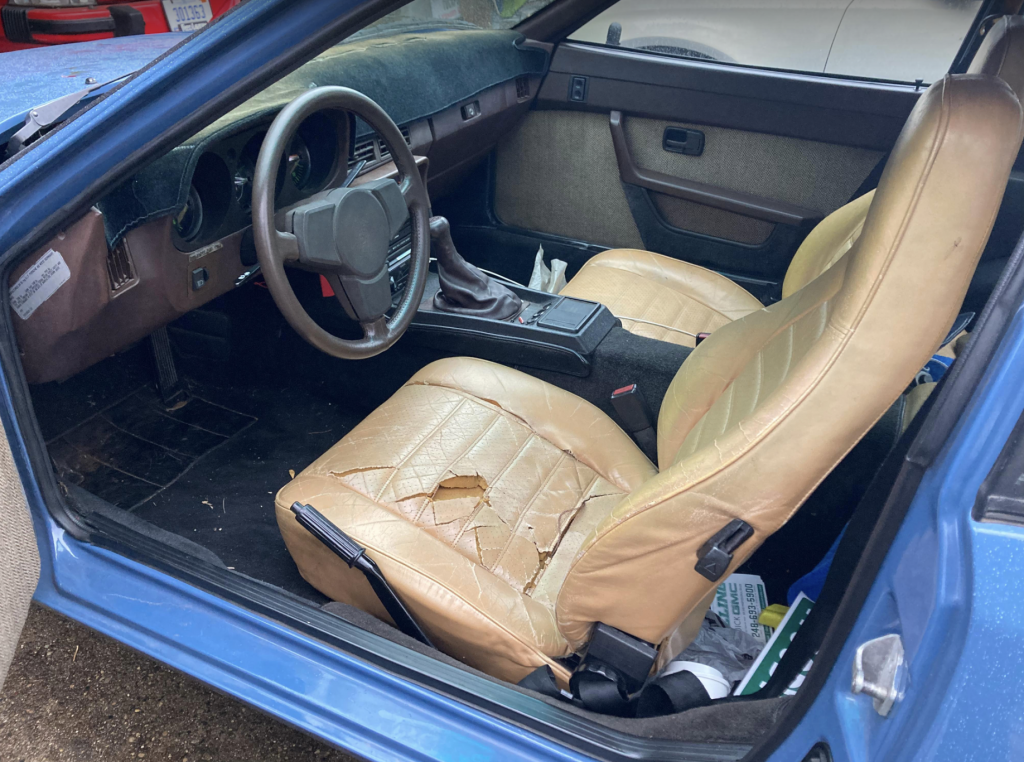 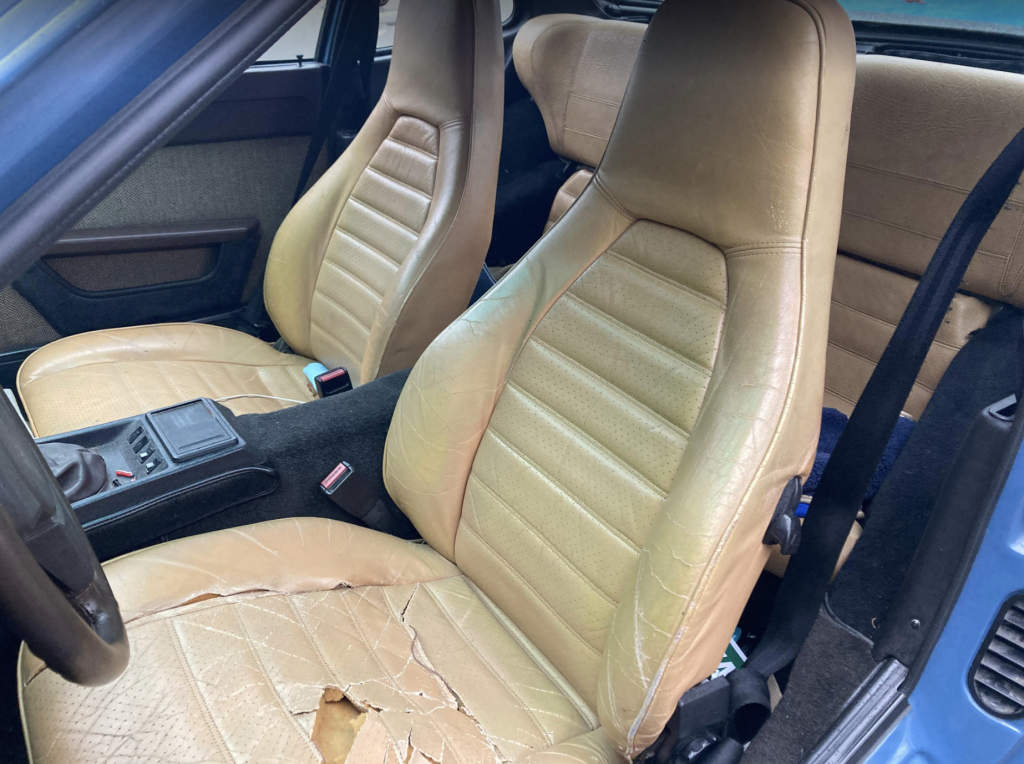 Luckily, one of Karl’s friends sent him a photo of a picture that U.S. Auto had posted to its Facebook page, advertising a recent newcomer to the junkyard — this Porsche 924: 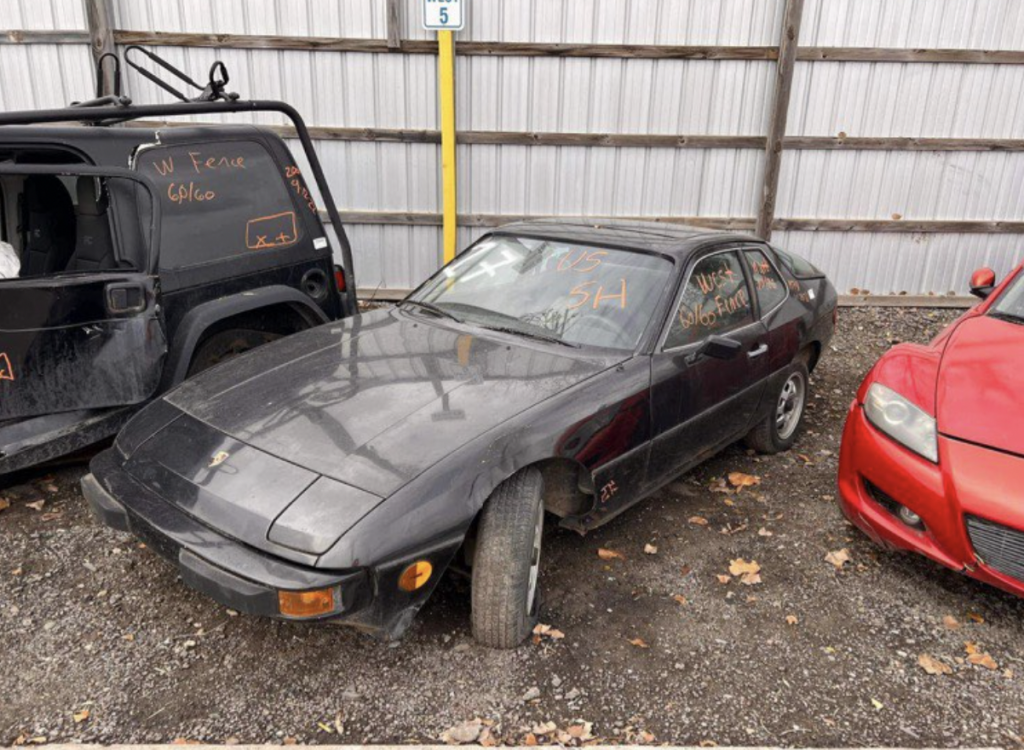 Karl and his friends headed out there, tools in hand, on Black Friday for “60 for 60” to he check out what shape the Porsche’s interior was in. Boy were they in for a pleasant surprise. I’ll let Karl tell the story:

Last Sunday [my friend] Amanda sent me a picture of the car at US Auto in Sterling Heights, which I initially didn’t think much of. I never complain if a 924 shows up in a local yard, but because I’m usually in need of turbo-specific parts that’re unique, I usually pass on them. However, on a random zoom-in to the pic, I recognized the two-tone herringbone pattern on the rear seats. When I got my 1980 924 Turbo five years ago, it came without much of an interior, save for the dash and seats. And over the years I’d pieced together a new interior out of a couple 944s. Vaughan, my 924 friend, mentor, and fellow 924 Turbo owner had given me herringbone tweed door cards to replace my haggard set a couple years ago. I figured they might be worth a look but didn’t have much faith in their condition, as most 924s I’ve seen look like they’ve been sat outside with the windows open for decades. 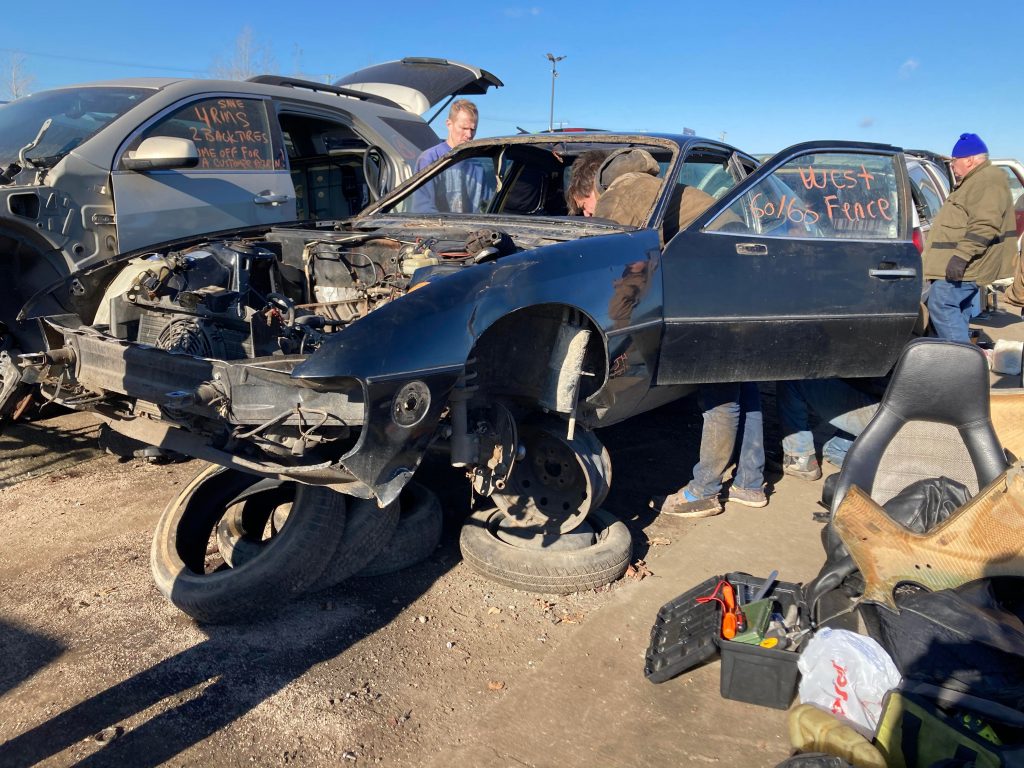 I recruited Amanda and my 924-inclined friend Vaughan to check out the car at the yard’s Black Friday special…Vaughan and I arrived at the yard just as it opened at 8am, with a line of automotive prospectors waiting to rush in like a Wal-Mart and start picking away. As we walked up to the car, a 1978 924, it looked to be in reasonably good condition — a dented fender being the only outward sign of damage. But as I opened the door for a peak inside, my jaw dropped to the floor: The interior was MINT. 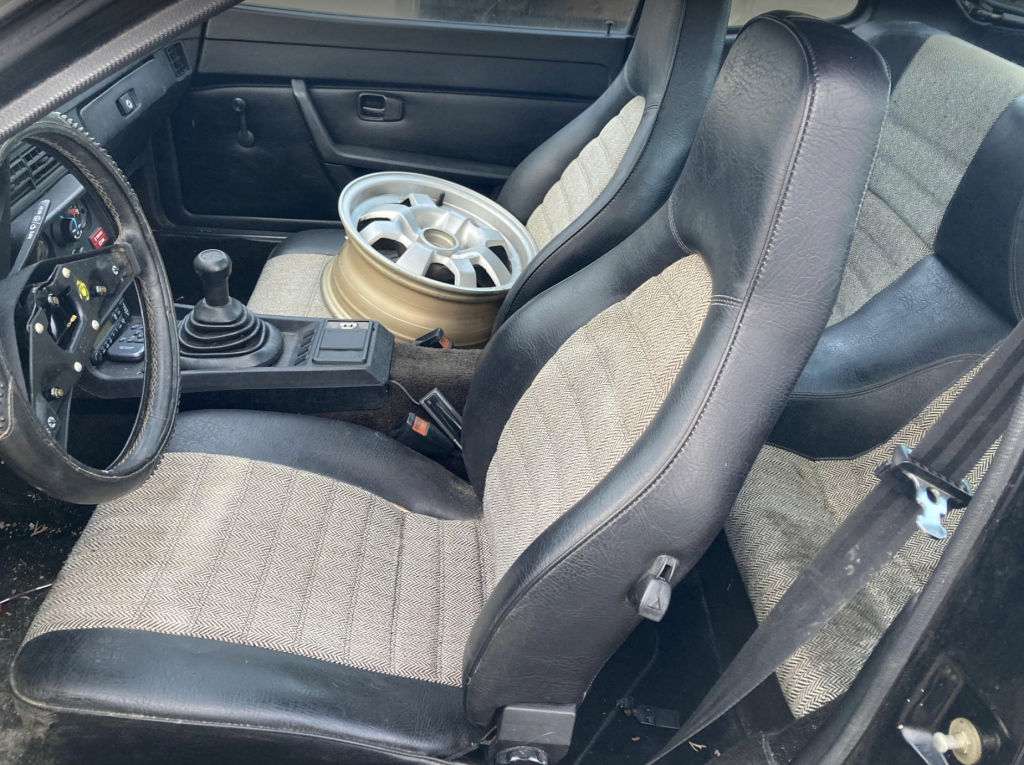 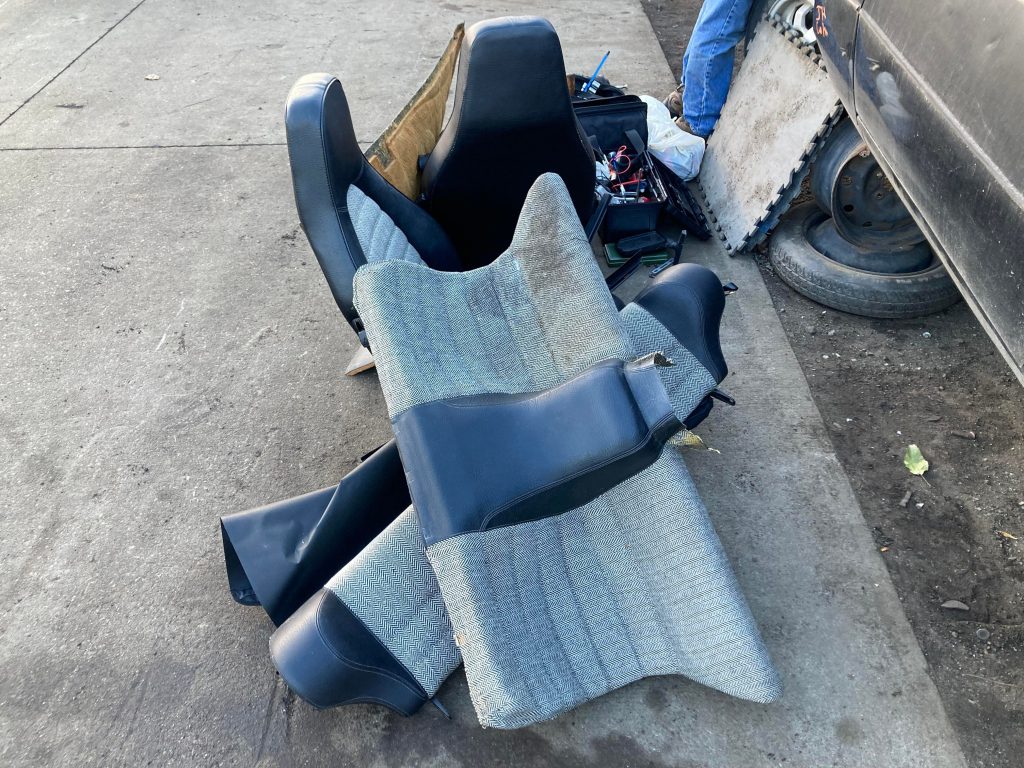 The dash was cracked as all 924s and 944s generally are, but aside from a tiny rip on the driver side seat, the interior was a junkyard time capsule. As I’m just in awe of this good fortune, Vaughan yells “SON OF A BITCH!!”. He was looking to pull the steering rack and sway bar drop links, so I’d assumed they were gone even though we were the first to touch the car. Then he motions for me to have a look underneath. 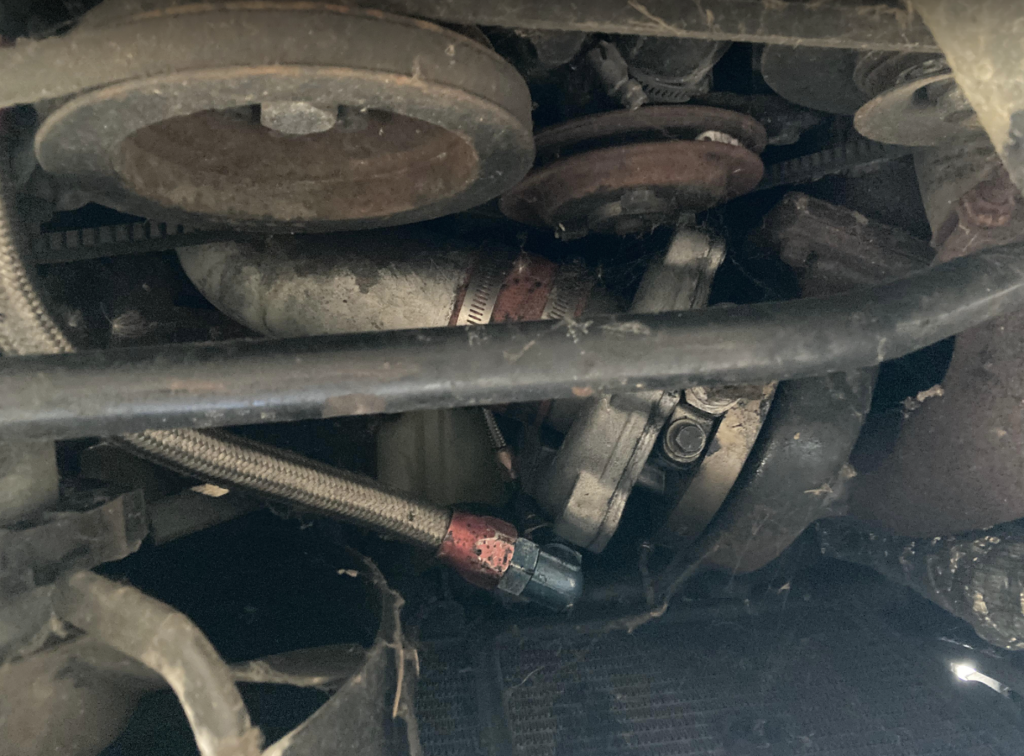 Dollars to donuts, this thing’s got a turbo on it. And it’s properly set up, albeit in a non-factory position. No naturally aspirated 924 ever left Neckarslum with a turbo other than the Turbo and Carrera GT/GTS/GTR models, and only one company seemingly offered an aftermarket turbo kit for these cars. 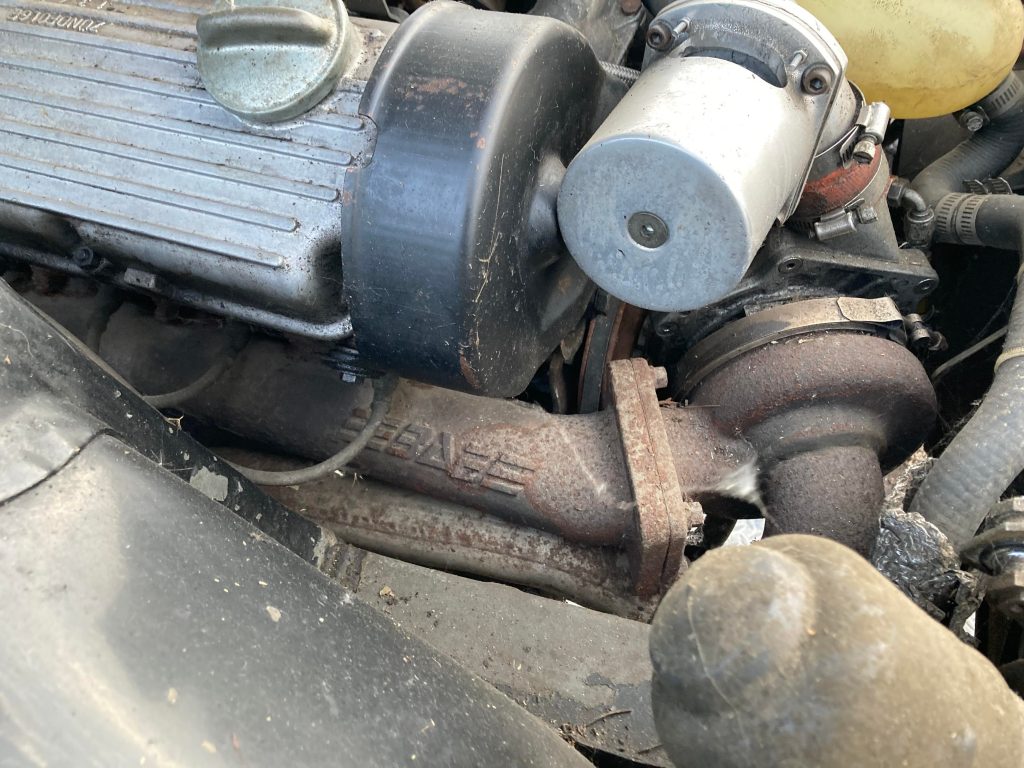 Similar to Callaway Cars, BAE Turbo Systems offered a kit for 924s in an unknown amount. This kit may be rarer than 924 Turbos. And somehow we stumbled upon a BAE-equipped 924 in Metro Detroit, of all places. Better than a goldmine, this was a unicorn that had no place being in the yard. Unfortunately, we couldn’t buy the car as a whole, so we began carefully pulling every part worth having; we weren’t gonna leave this for others to take. Vaughan started on pulling the turbo kit and head, and I began carefully removing as much of the interior as I could. Amanda came by later on with hot chocolate and helped us remove some of the remaining bits we wanted. By the time we were done around 2pm, we had the entire interior (save for the carpet, which Vaughan went back for on Sunday), the turbo kit and cylinder head, the rear lights, front and rear reflectors, and some other odds and ends. 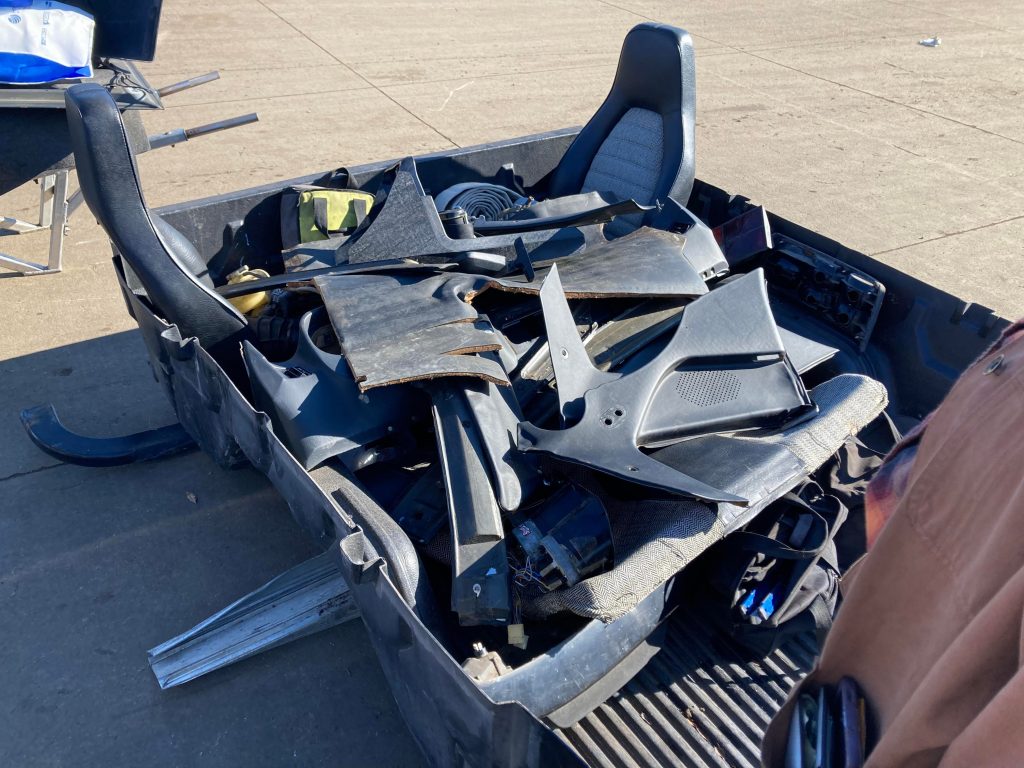 Now, to carry all of this the 60’, I’d comically thought the 924’s hood would be more than enough to hold this haul…….yeah, no. Amanda, far more resourceful than I, found a truck bedliner we could stuff all the parts in. I found a long aluminum bar to stick underneath as a structural member and an extra place to carry the liner. And with two extra pairs of hands, courtesy of a group that we helped pull the gearbox from the 924 for, we hoisted the thing the whole 60’. Now, because it was actually $60 per person carrying, we paid $300 for thousands of dollars of parts. But between Vaughan and I, it was actually $150. A steal any way you swing it.

Imagine that — a beautiful interior, a cylinder head, an entire turbo system, and lights for your Porsche for $300! That’s a deal and a half. 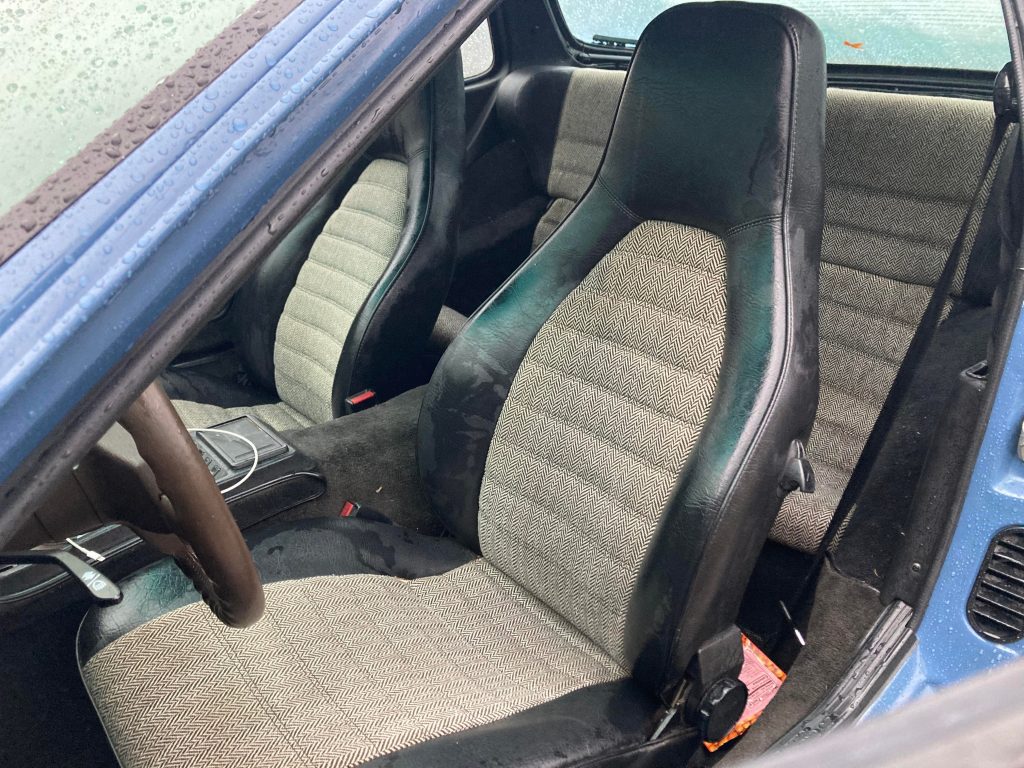 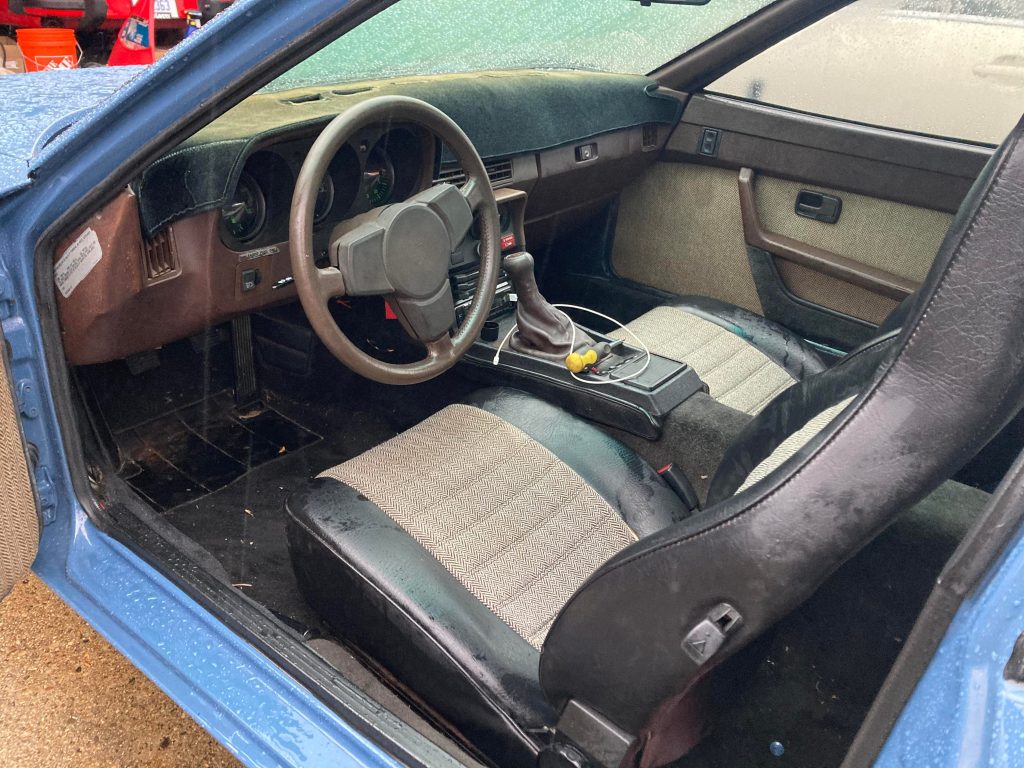 What a huge improvement! I can’t wait to see this thing at the next Detroit-area Autopian event. I’ll be in LA, of course, but I’ve got some roots (friends) in Detroit, and you know I’m gonna have a meetup when I do come back. Detroit car culture is awesome, and a big part of that is thanks to the amazing local junkyards.

Rust-loving Jeep man, cofounder and EIC of The Autopian, Jason's friend. Email: david@autopian.com
Read All My Posts »
PrevPreviousThe BMW 3.0 CSL Is A Slightly More Powerful M4 That Maybe Costs $750,000
NextSeven Car-Related Toys That Are Perfect Gifts For Kids Or For You To Take When The Kids Aren’t Not LookingNext