This Dealership Proudly Selling A 344,591-Mile Honda Accord Junker For $2,200 Shows The Sad State Of Used Cars

If you’ve tried to buy a used car anytime in the past year or so, you probably quickly learned how much car buying sucks right now. Some cars are hard to find and so many of them are priced into the stratosphere. Even beaters can’t escape this crazy car buying market. Another example of this can be found in Texas, where a Toyota dealership is selling a worn down 1993 Honda Accord with 344,591 miles. For $2,200.

As often reported, the COVID-19 pandemic created a perfect storm for high car prices. Between chip shortages and demand outstripping new car supplies, dealerships and buyers alike have been storming to used cars. Prices on many used cars have, like many other things in this economy, risen dramatically, leading to some frankly wild headlines and even wilder dealership listings. Look no further than our own reports about the state of the used car market. Just this morning, my colleague Thomas wrote about how Nissan will sell 10-year-old certified pre-owned Altimas. Or perhaps more incredible is the fact that Nissan is apparently willing to give its Certified Select CPO branding to non-Nissans, too.

Not even the very low end of the market is safe from this madness. Cars that may have been $500 in the past can be far more expensive now. Even my favorite kinds of cars, German ones known for dubious reliability, have seemingly spiked in price. And now we have another example of how bad things are. Take a look at this 1993 Honda Accord LX that is actually being sold by a Toyota dealership. 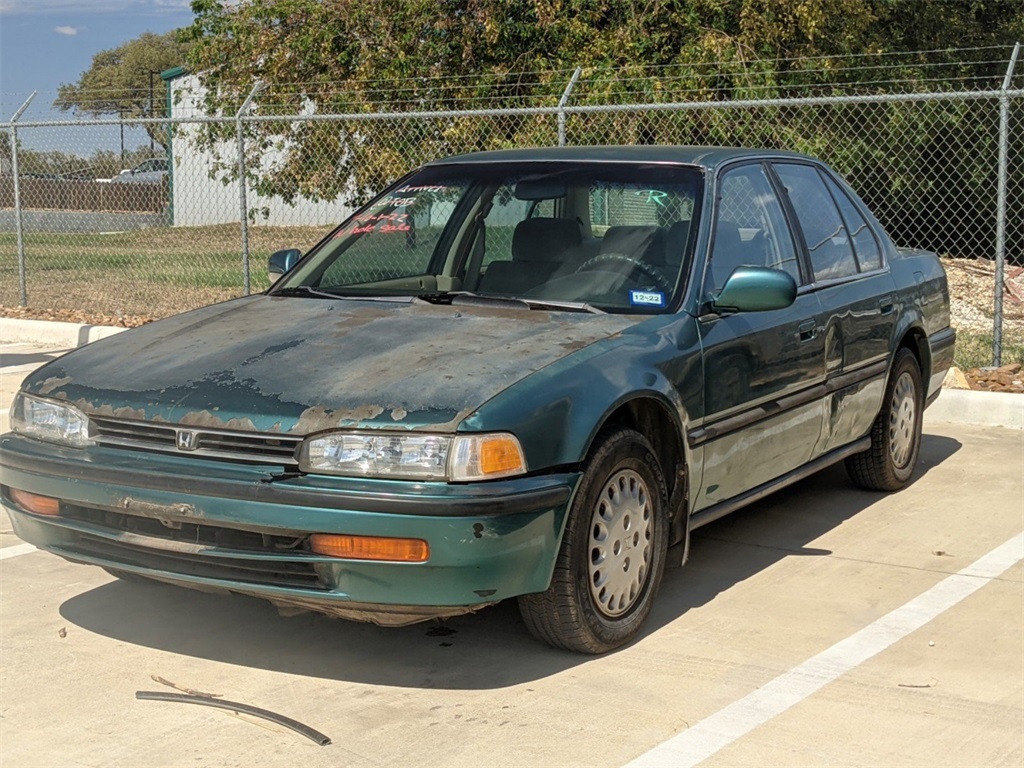 This comes to us thanks to Zerin Dube on Twitter. The dealership, Vic Vaughan Toyota of Boerne in Boerne, Texas (the dealership pronounces that like “Bernie”) actually had this car listed on its website. The listing has been taken down, but I called the dealership to confirm. I spoke to Aaron, the dealership’s Used Car Manager, and while Aaron wasn’t sure if the car was still for sale, he confirmed to me that the listing was real and the dealership was indeed selling this car.

Our conversation was short, but I asked Aaron a few questions about the car and the dealership’s used vehicle sales. He wasn’t sure where the car came from or anything about its story. However, Aaron tells me that the dealership sometimes gets cars like these to sell to buyers that need some cheap transportation. I asked how the dealership determines what cheap cars to sell, and he told me that the dealership will sell any car that can pass Texas inspection. Sure enough, the Honda is good until December.

Finally, I was also able to ask Aaron about how these types of cars are selling nowadays versus before the market went crazy. And he told me that he believes that they’re selling more super inexpensive cars like this Honda today than the dealership did in the before times. 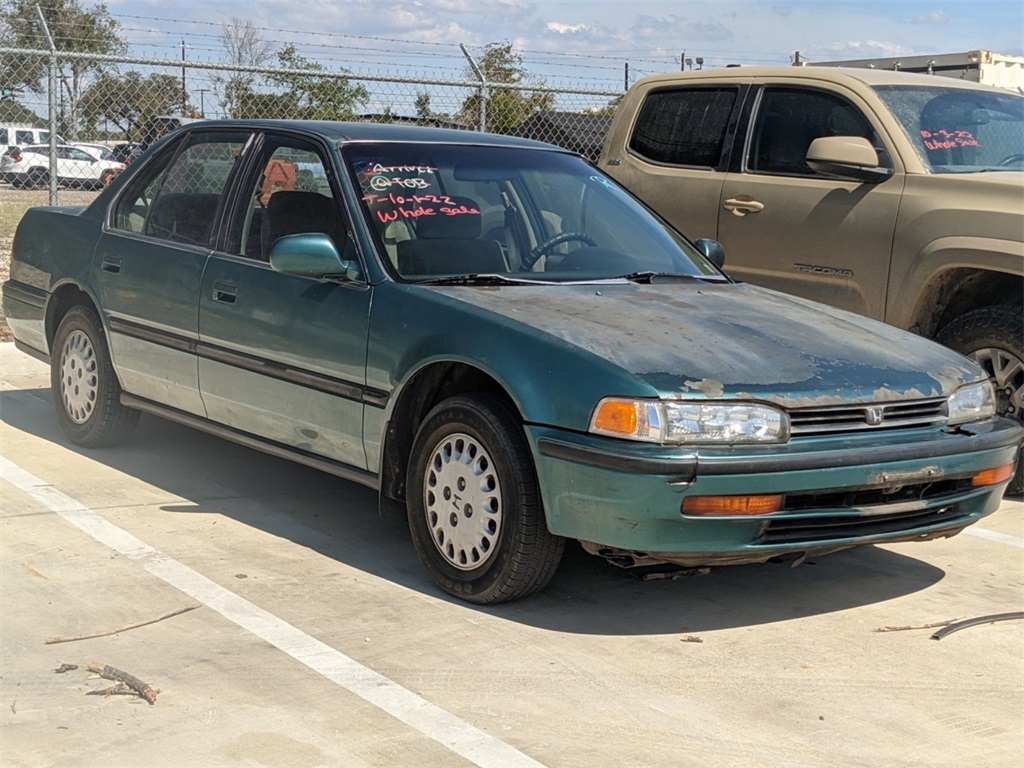 This is a fourth-generation Honda Accord. The fourth-generation of Honda’s family hauler sedan brought the vehicle into the mid-size. Its design is more evolution than revolution over its predecessor. The rad 1980s-style pop-up headlights were gone, as was the hatchback. SAE International notes that Honda did more than just eliminate pop-up headlamps, as it engineered headlights that had totally clear lenses to improve lighting efficiency.

Also new is an all-aluminum 2.2-liter inline four. In an LX like our car here, it’s making 125 HP. That’s not a ton of power, but at least it gets to the front wheels through a five-speed manual. Honda’s cars from this era were known for their good engineering and it shows. 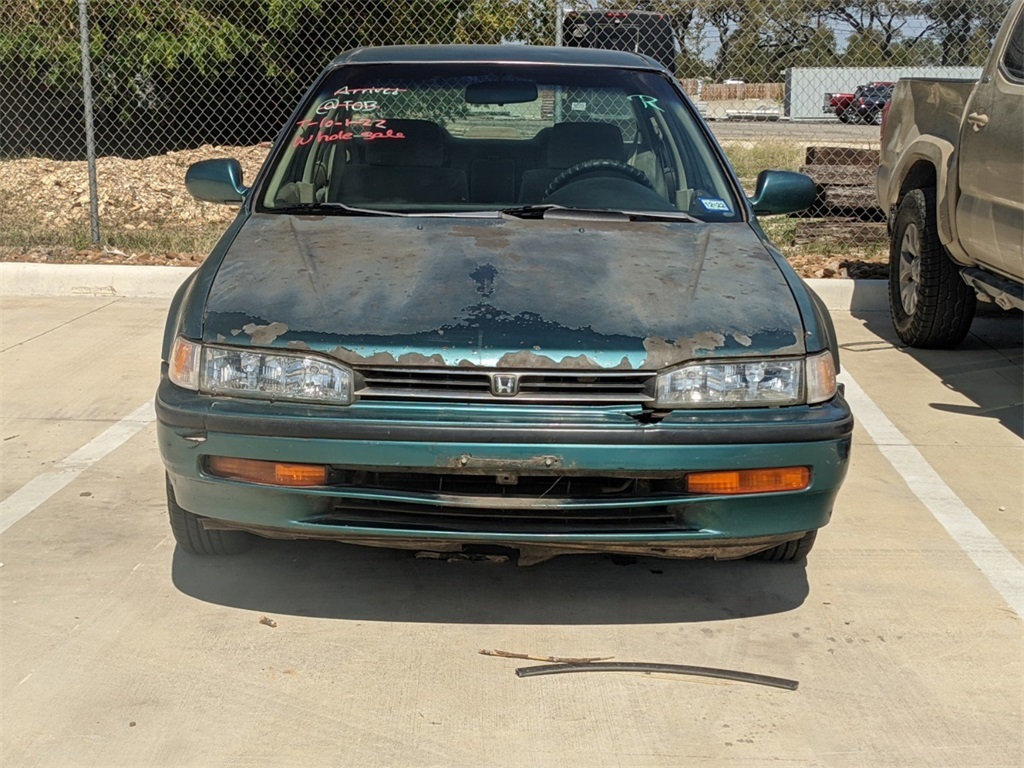 Ok, well, maybe not in this car. It has 344,591 miles on its odometer and has the scars to show for it. The hood started losing its paint long ago. Its bumper has lost pieces here and there. And there’s what appears to be a rubber seal on the ground. It’s unclear if that seal belongs to this car, but it helps make for a perfect visual of a hard-working Honda.

The left side hasn’t fared much better, with the bodywork wearing the dents and crinkles of some past mishap. The rear of the car looks cleaner, where the worst damage is a crinkle and some rust under the left taillight. And by clean, I definitely mean damage. The dealership didn’t bother washing it before snapping photos. 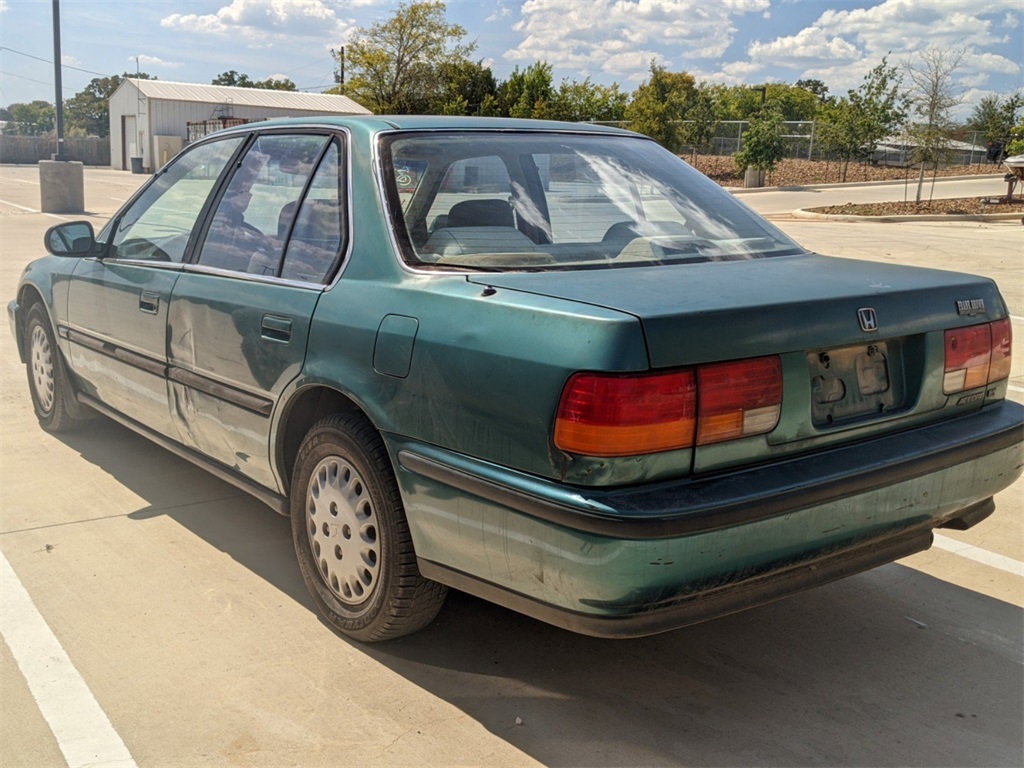 Considering the rest of the car, the right side is surprisingly clean. If this were a Facebook Marketplace listing, this is the side that would be the first picture.

We’re not given interior photos of the car, but from the outside it appears that the headliner is intact. This car probably got many different people to all kinds of places over its nearly three decades on this planet. If it could talk, it probably has so many stories to tell. And I bet that despite the looks, it probably still runs well.

Still, three years ago, this car would have probably been less than $1,000. But this is the reality that we’re in now. [Editor’s Note: I’m all for dealers selling old high-mileage cars. It’s just wild to see a car this crappy framed like it is in the top photo, with the dealership shown proudly in the background. You’d think this car would typically be relegated to the back lot, and sold to the mechanic’s 16 year-old nephew. -DT]. Recent data suggests that the used market may be beginning to cool down. Hopefully it does, and we can go back to lovingly enjoying these cheap cars on the cheap.

Mercedes is a lifelong fan of all things powered by an engine. When she isn't driving one of her five Smart Fortwos or her 14 other vehicles she could be found in the cockpit of a Cessna 172 or perhaps swimming in any body of water that she could find. She also has a deep love for buses of all kinds. Please send her buses. mercedes@theautopian.com Instagram: @mistymotors Twitter: @Miss_Mercedes30 Facebook.com/neonspinnazz
Read All My Posts »
PrevPreviousMaserati Pays Tribute To F1 Pioneer Maria Teresa de Filippis With New FTributo Cars
NextFord Is Going To Build A 4×4 Camper Van Specifically For Vanlifers And It’s Going To Be Called The Ford Transit TrailNext