When I went to the RV Open House last month, I promised you lots of stories about the cool RVs that I found there. I’m still not through all of the wacky, smart, and cool rigs that I found out there. So, here’s one that genuinely blew my mind with how well it was thought out. This 2023 Jayco Jay Feather Volare is an American camper inspired by European design, and it’s really clever!

Located all by itself in the Jayco section of Thor Industries’ display was this little trailer. The sign telling you about it was covered up and it wasn’t even placed in a manner that would have you think it’s something special. I only later found out that the cool little trailer I toured is a new model for 2023, and this is the prototype for it. Maybe I missed a reveal or something because this little guy is so well thought-out that it deserves some attention. 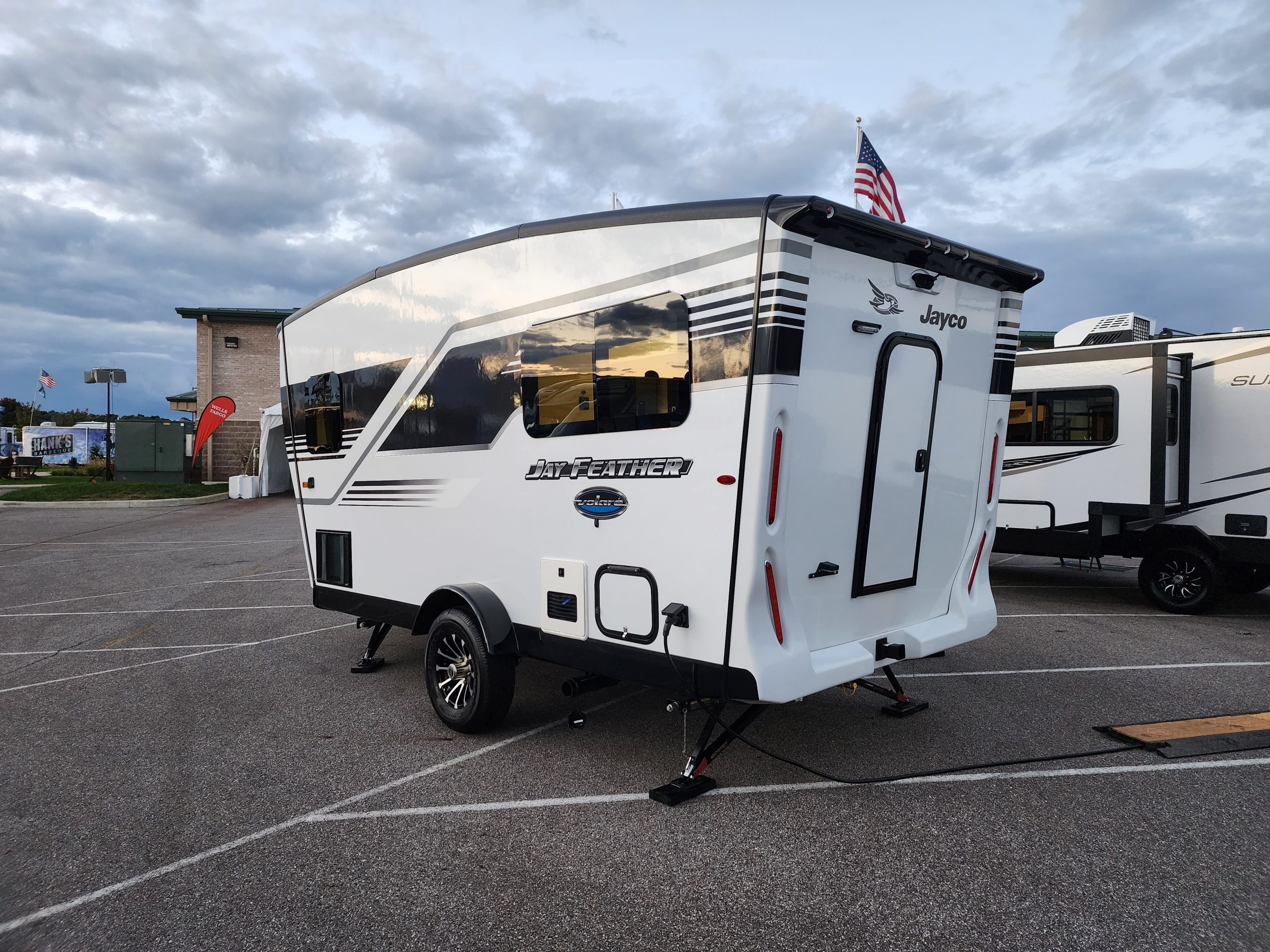 This is the 2023 Jayco Jay Feather Volare. Upon first inspection, you’ll notice that it has a shape unlike the typical American camper. Americans are used to camping in what are more or less boxes covered in swoops and punctuated with a slide or a few. Many campers aren’t going to catch your eye with their design and remove the brand names from them and you probably won’t be able to tell them apart. That’s the first thing that caught me about the Volare.

Revealed at the Jayco Dealer Homecoming and presented again at the RV Open House, only dealerships and yours truly have been able to see the prototype in person. Jayco says that the design of this camper was inspired by European campers, which often have a bit more going on with their exteriors than their American counterparts. You caught a glimpse of what I’m talking about when I wrote about that cute Barefoot camper, which originally made its debut in the UK.

John Fisher, director of product development for lightweight towables at Jayco, says that this design was the result of feedback from dealerships and customers. Jayco’s customers and the people selling them asked for something different from the brand, and this is what Jayco came up with. 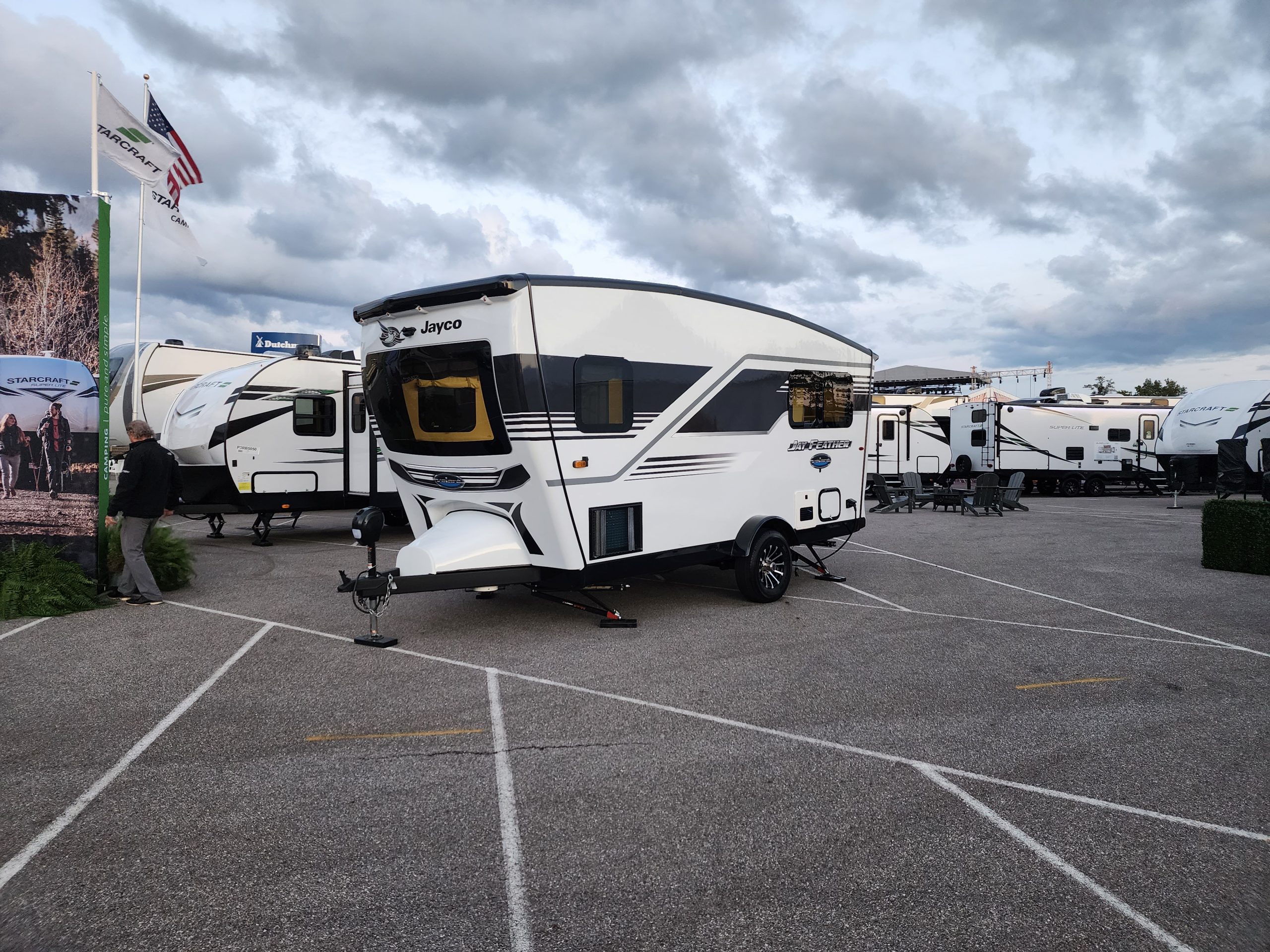 The clever bits start right out of the gate with the exterior. This trailer has an eight-sided composite and aluminum construction. The aluminum is extensive, covering the flooring to the ceiling. That’s a good start, and to my eyes, this looks like another unit that’s not going to fall to delamination. The end caps, for example, are fiberglass, so you wouldn’t see bubbling there!

On the exterior, it’s the roof that really caught my attention. If you’ve looked at just about any common travel trailer, you’ve noticed that RV manufacturers like putting a bunch of stuff on the roof. You’ll see air-conditioners, vents, and maybe even communications equipment. That’s a lot of places where water can someday leak in and cause you big headaches.

This camper? It has a one-piece fiberglass roof, and you’ll notice a distinct lack of stuff poking out of it. That doesn’t mean that you lose an air-conditioner, either. Instead, cooling is done by a Dometic Cool Cat mounted in the trailer’s body. It’s a heat pump and works like a hotel room’s air-conditioner does. 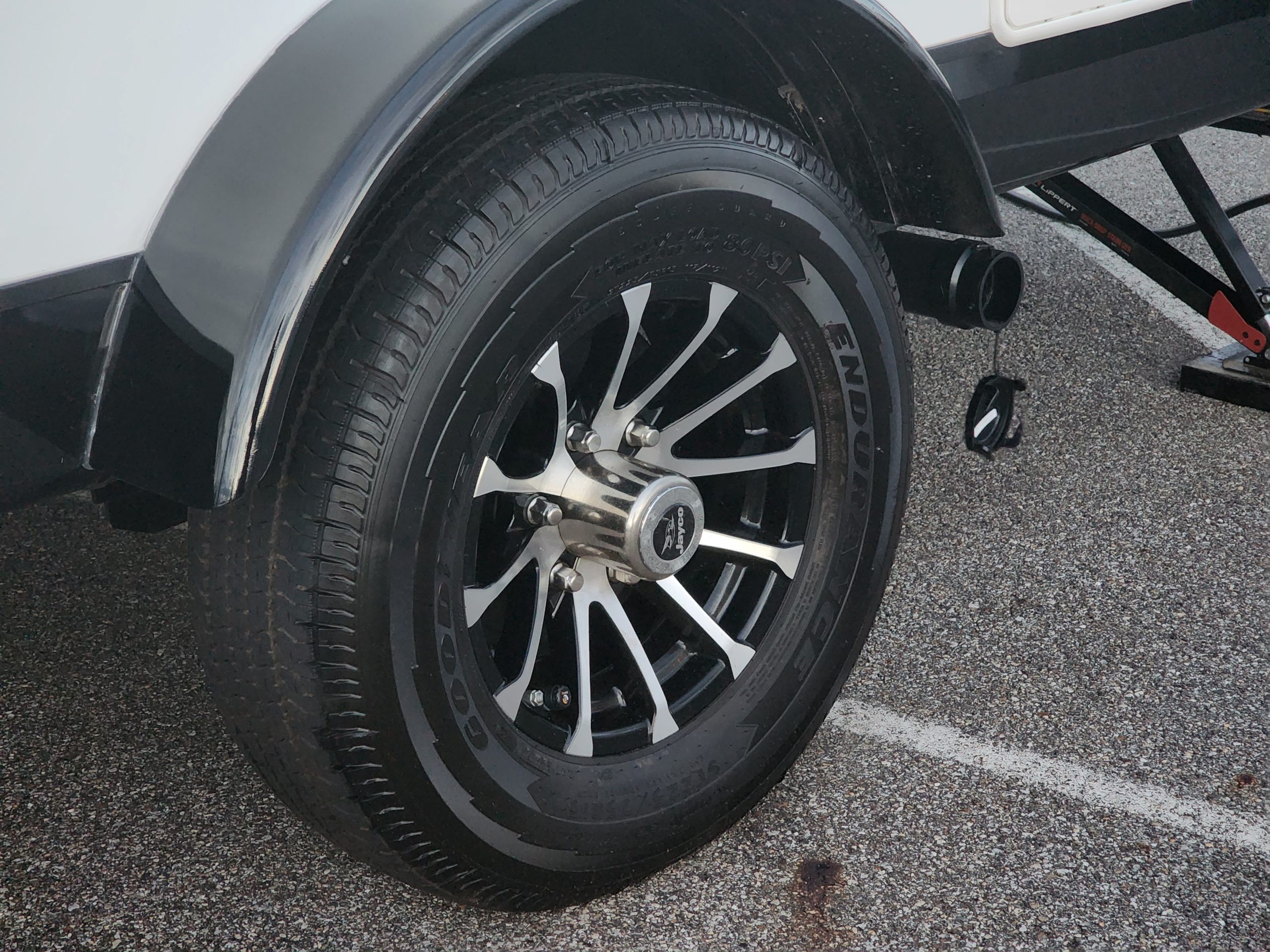 Instead, the roof has 400 Watts of Go Power! solar panels integrated into the curved surface. In theory, this means fewer openings for water to eventually find its way through. And fiberglass is a great choice, too.

As eTrailer notes, rubberized roofs are currently the most common type of roofs. You’ll often find RV roofs made out of Ethylene Propylene Diene Monomer (EPDM) or Thermoplastic Polyolefin (TPO). These types of roof skins are commonly used because they’re inexpensive to lay and repair, and can last a long time. Both types of rubberized roof have been in use for decades, too. However, rubber roofs notably require regular maintenance to keep in good shape and the skin can be punctured, causing leaks.

As RVshare notes, there are alternatives like fiberglass and aluminum, both of which are more expensive and heavier than rubber, but both offer enhanced durability and lower maintenance. This Jayco having a fiberglass roof on top of fewer places to leak? That alone makes this trailer a hit out of the park for me. 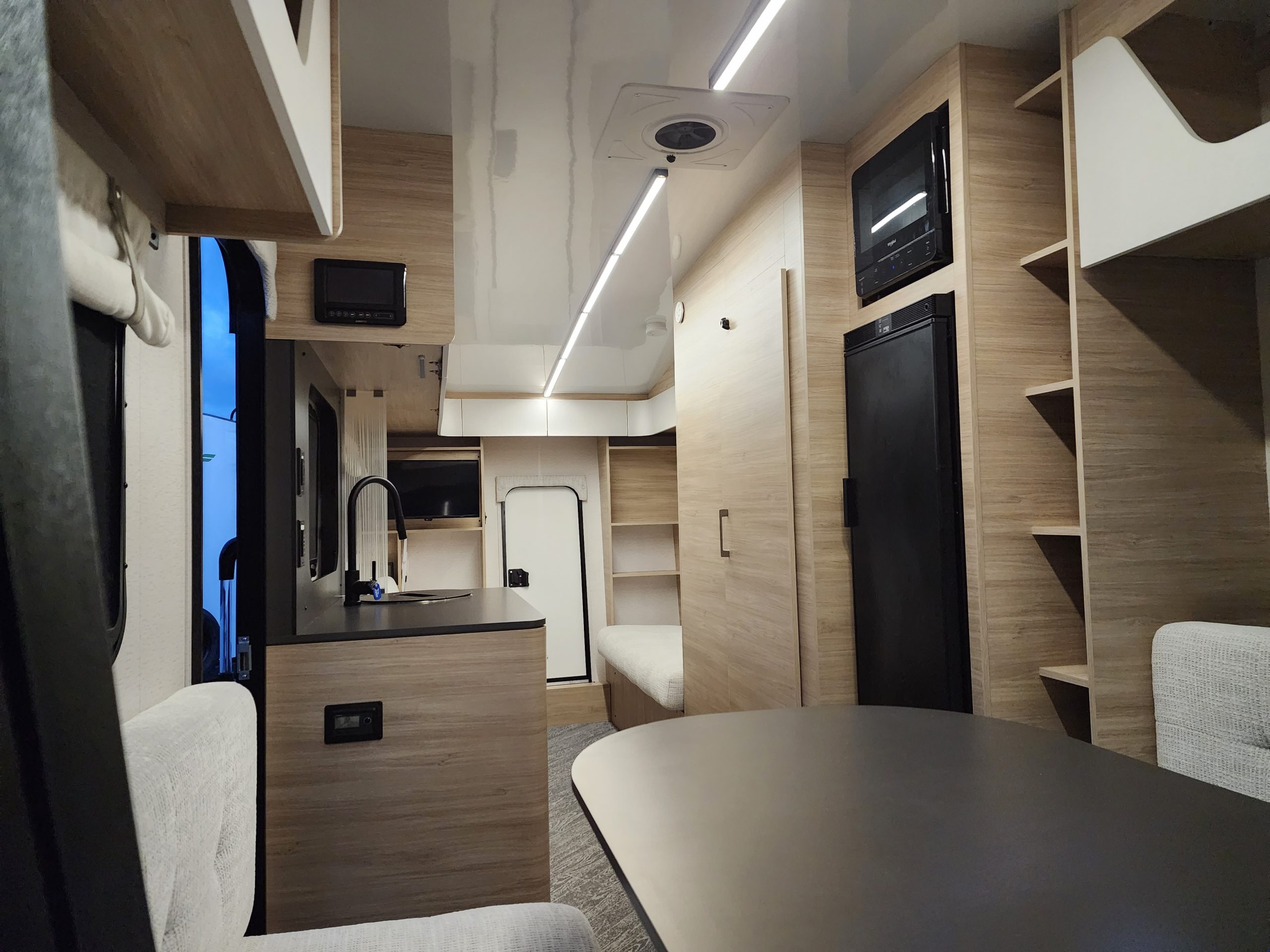 Moving inside, the European theme continues. Up front is a dinette that turns into a bed.

Moving back, on one side there is a really compact kitchen unit. This consists of a single portable induction cooktop stored in one of the drawers. Another drawer opens and functions as a surface to put the cooktop on. And the sink is a little basin with a cover on top. You also get an open pantry, a microwave, and a small refrigerator. The pantry is a bit puzzling, as a good bump will send your food flying about the camper. But, since this is a prototype, I’m willing to believe that the production version will have doors there. 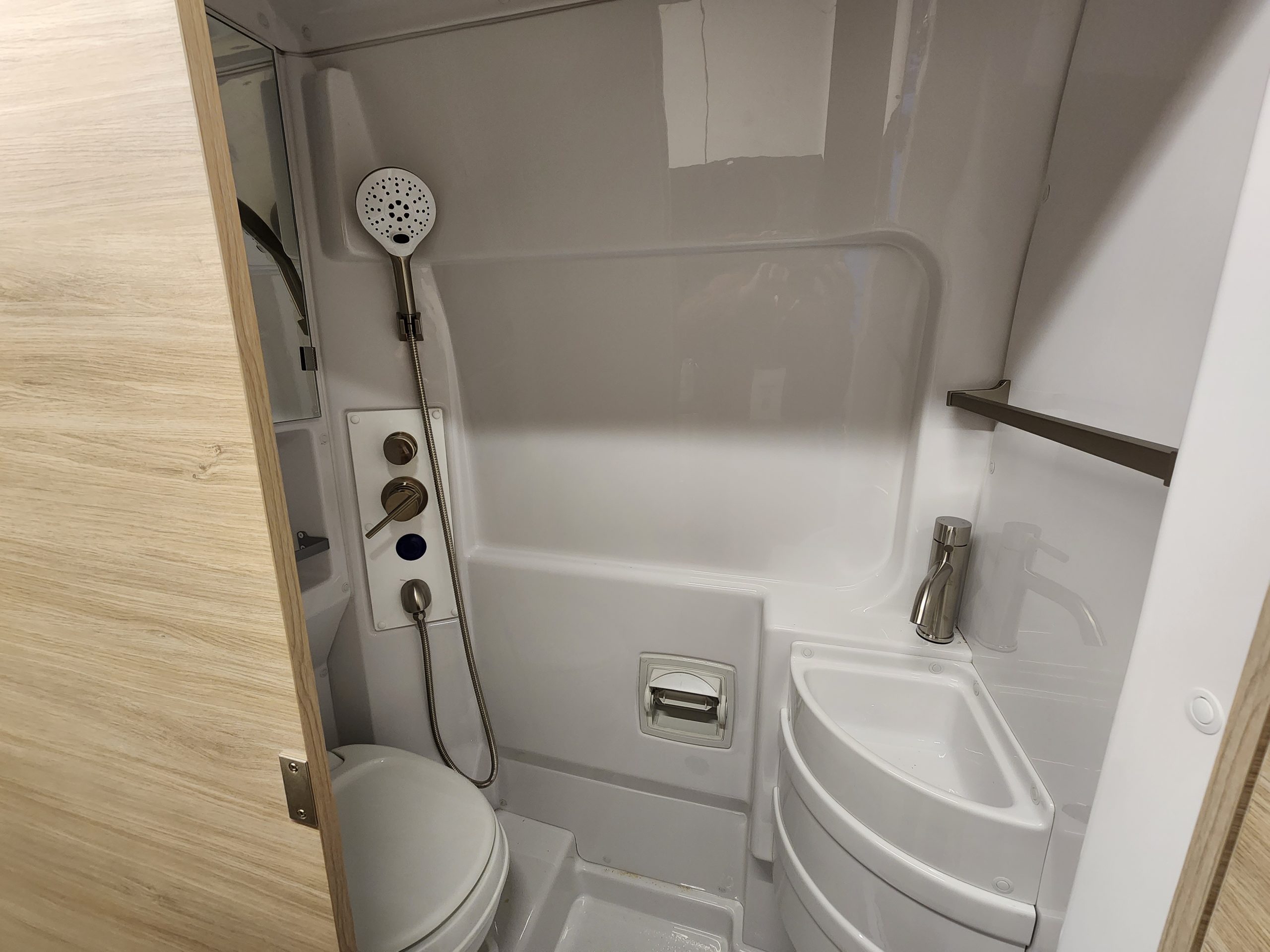 On the other side is the wet bath. Now, the addition of a bath to a camper tends to remove a few inches of headroom. To combat this, camper manufacturers often add skylights to add that room back. Well, this doesn’t do that, so your showers might be a tad cramped. That said, I’m ok with that, as the skylight was found to be the source of the catastrophic leak in my parents’ travel trailer. One less thing to worry about.

Interior height wasn’t published, but it seems to me that a six-foot-tall person will fit nicely in the camper without complaints. If I had to wager a guess, there’s at least seven feet of height in there. 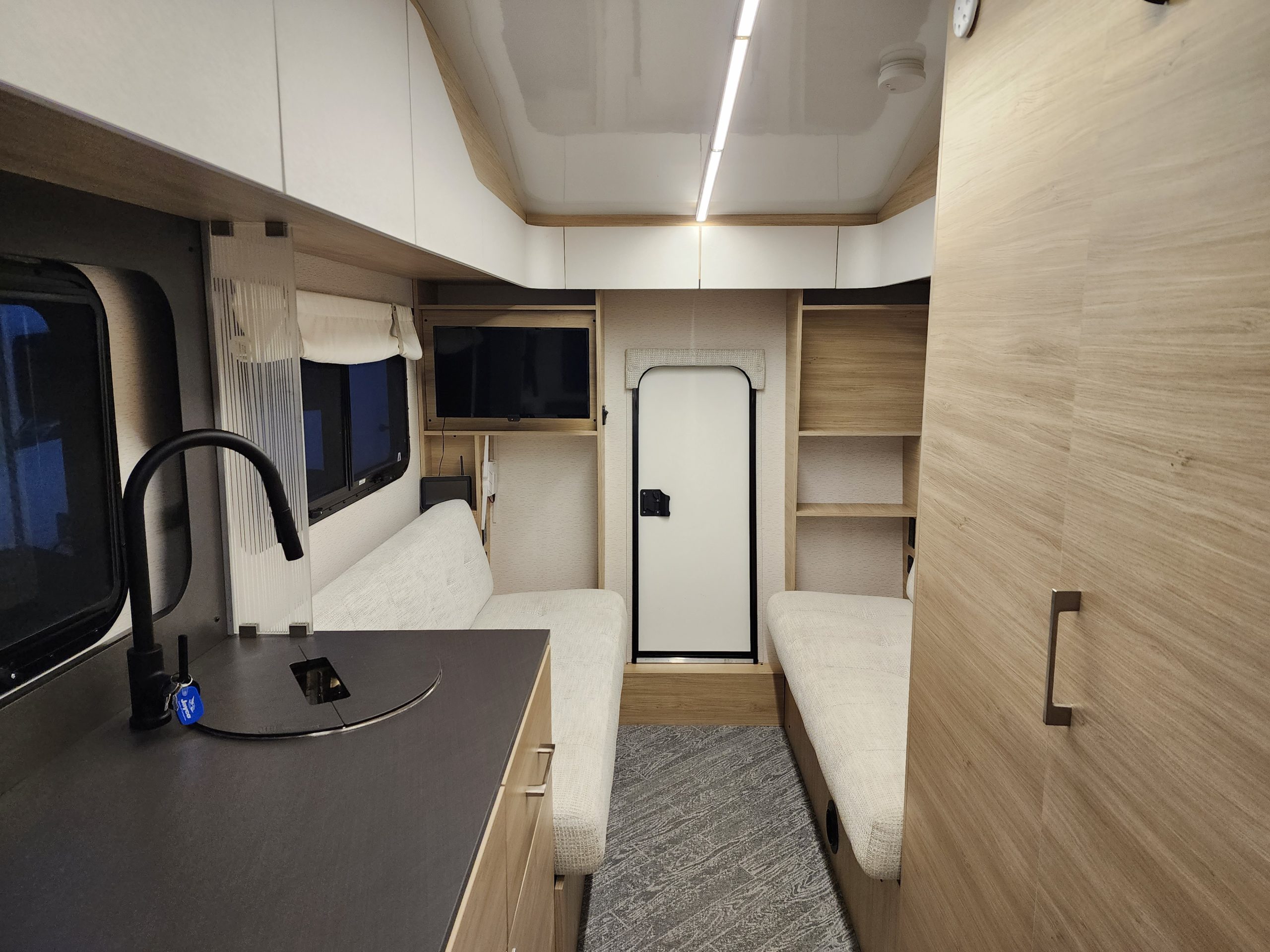 Moving back, the rear of the 20-foot total camper features two sofas that face each other. With a push of a button, these electrically transform into a queen bed. And behind that is the camper’s second door. I’m not sure what the benefit with that second door is, but more than one way to get in and out is always good to me! 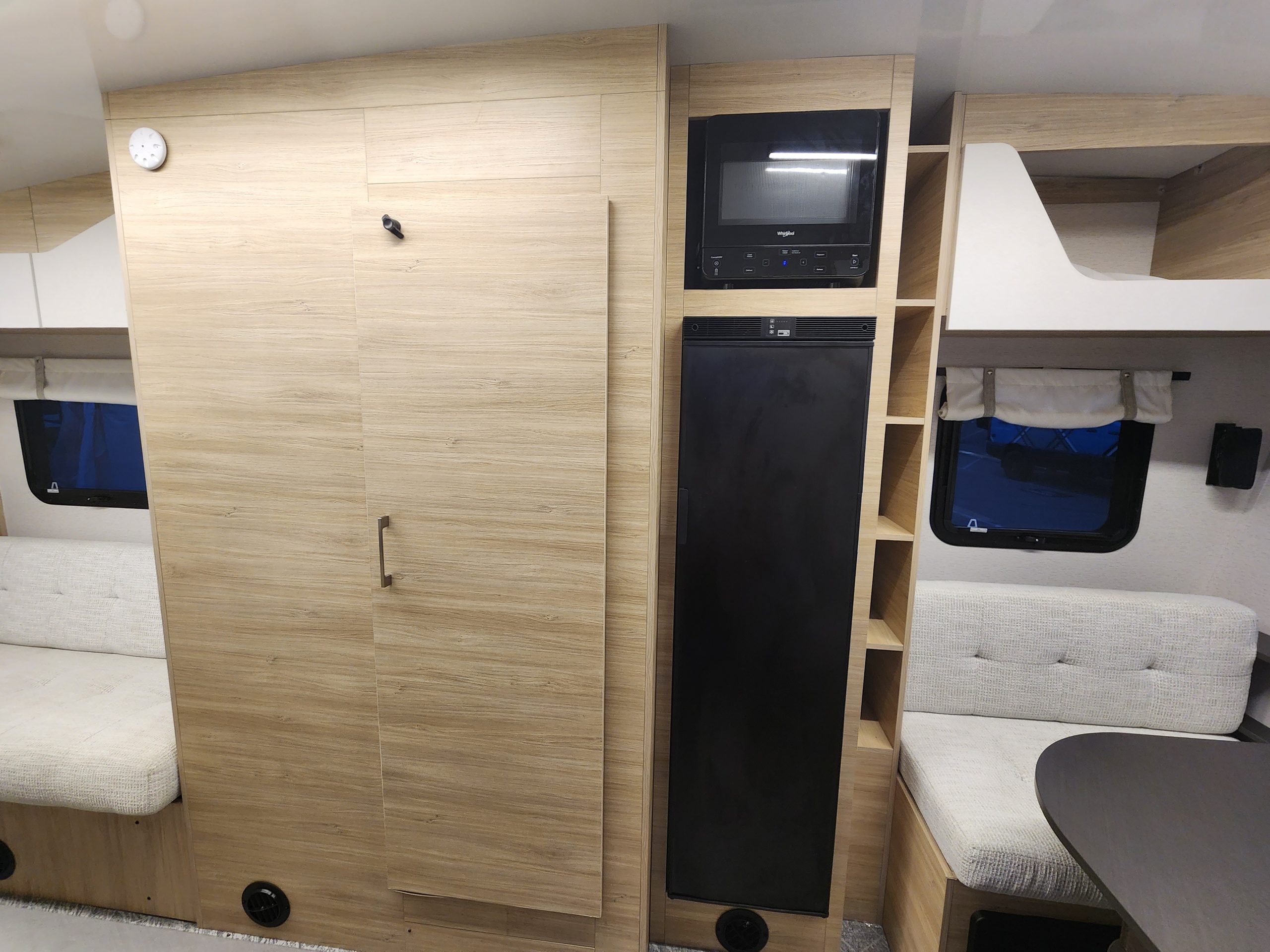 Additional features include a Jaycommand smart RV system that allows you to monitor your tanks and make adjustments to lighting and the electrical system from your phone. The solar is backed up with two 200-Amp lithium batteries and an 1,800-watt inverter. You have 25 gallons of fresh water, 30 gallons of gray water, and 30 gallons of black water storage onboard, so you could perhaps take this out for a weekend getaway without having to hook up to anything.

The trailer also comes with a Bluetooth speaker that detaches from the wall and there’s even a Wi-Fi router in there. Jayco also says that it comes with perimeter cameras, so when you’re driving you can take a peek at what’s happening around the trailer. And of course, it means that you can park it without a spotter and without getting in and out repeatedly. 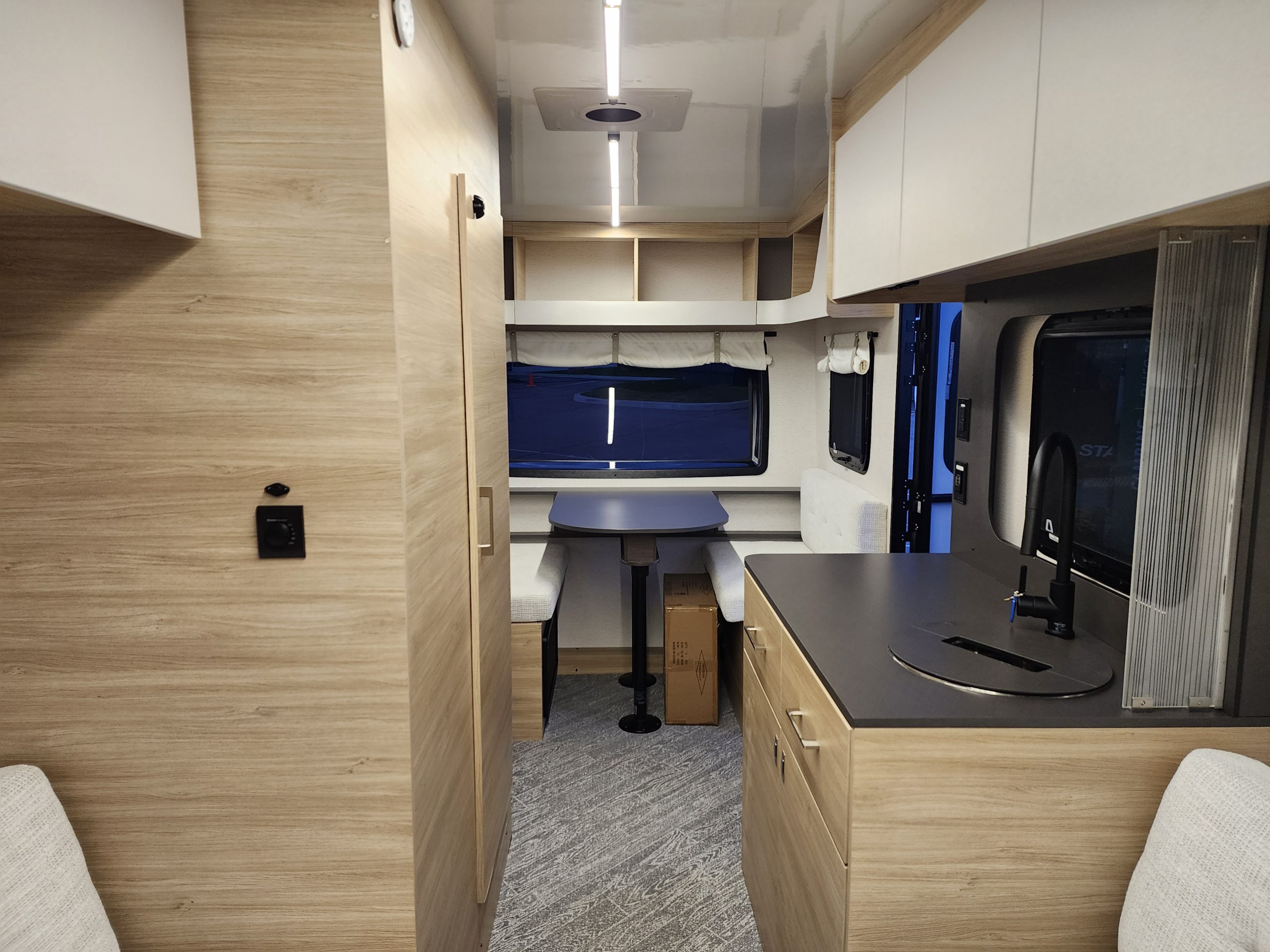 Another thing that impressed me was the quality of everything inside of the trailer. This felt like an expensive Airstream inside, with surfaces that don’t make you recoil when you touch them. Usually, you can find where a manufacturer cut corners in building a camper. That’s not the case, here, as everything felt tight and nothing stuck out as rushed, or there to save money. Of course, this is just the prototype. But Jayco says that this is more or less what you’re going to get as a customer.

There are more good things, too. It weighs just 3,960 pounds and has an accessory hitch so you can take along bicycles and other things. But don’t get too carried away, as your payload is just 1,035 pounds. 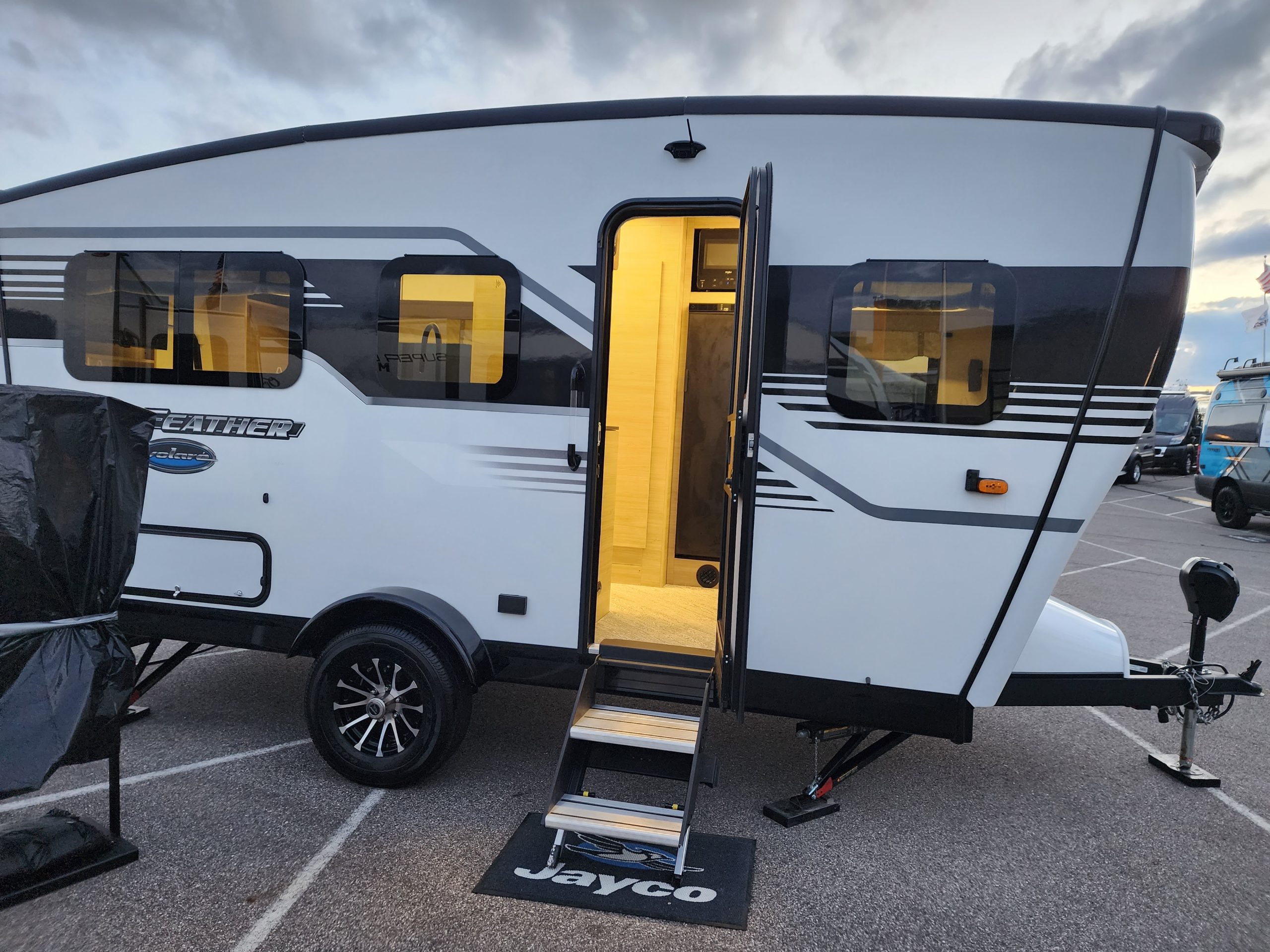 Overall, I love this travel trailer. It’s a refreshing design, and there are some neat ideas at work here. I will say that this does look a bit like an inTech Sol Eclipse, which has an even bigger front window, but I like how Jayco removed even more from the roof than inTech did.

Exact pricing information hasn’t been released yet. But you can expect it to hit dealerships sometime in 2023 with an expected price in the upper $40,000-range.

Mercedes is a lifelong fan of all things powered by an engine. When she isn't driving one of her five Smart Fortwos or her 14 other vehicles she could be found in the cockpit of a Cessna 172 or perhaps swimming in any body of water that she could find. She also has a deep love for buses of all kinds. Please send her buses. mercedes@theautopian.com Instagram: @mistymotors Twitter: @Miss_Mercedes30 Facebook.com/neonspinnazz
Read All My Posts »
PrevPrevious‘It Will Take Years’ For Used Cars Prices To Reach Pre-Pandemic Levels
NextThe Fastest Dodge Last Call Special Editions Carry Lofty Six-Figure Price TagsNext