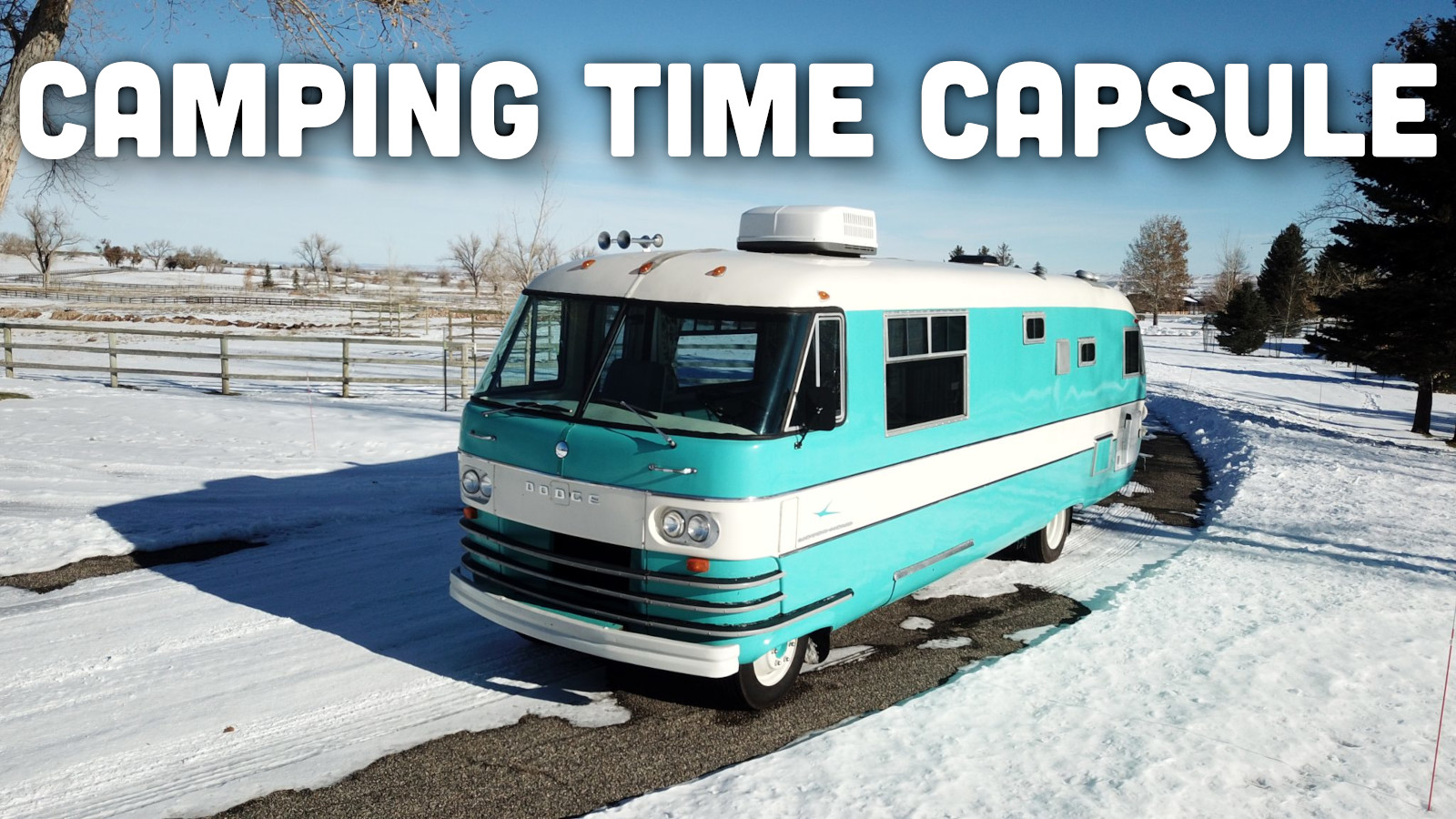 When someone talks about a self-propelled RV, the term “motorhome” will often come up. It makes sense since Class A RVs have for several decades given travelers the comforts of home, but with wheels and an engine. It wasn’t always this way, and motorhomes were once called “house cars.” Then Raymond C. Frank came along, producing his stylish Frank Motor Home and later the Dodge Motor Home. He’s often credited as the person to coin the term, and a minty example of his pretty RV is now rolling across an auction block.

Prior to the 1900s, camping was touted as a way for Americans to escape from the stresses of everyday living. In those days, campers had choices on how to enjoy the great outdoors depending on their preferences and means. The simplest form of camping was backpacking. Others went on horseback or hitched a wagon to horses. The earliest RVs were wagons converted into mobile homes.

RVs have come a long way from the covered wagons of the late 1800s. In 1910, the Pierce-Arrow Motor Car Company created the Touring Landau, a vehicle commonly called the first production American RV.

And in 1915, Roland Conklin’s Gas-Electric Motor Bus Company built a 25-foot-long, 8-ton camper. Conklin and his family took the vehicle on a westward drive from Huntington, New York to San Francisco, California. This camper reportedly had working electricity, a bathroom, a kitchen, appliances, and sleeping berths.

The RV industry in its infancy must have been a sight to behold. Countless companies and individuals all had their own ideas of the best camper, some of them better than others. For example, the reportedly oldest surviving motorhome in the world, looks like a boxcar bolted to a 1914 Ford Model T. Just a touch over 20 years later came the famous Hunt Housecar and the Bowlus. Self-propelled RVs were often called “house cars” back in those days. That was until Raymond C. Frank came around.

As the story goes, Frank was the owner of a trailer manufacturing company. In 1958, he decided to take his family from their Brown City, Michigan abode down to Florida for a family vacation. While there were certainly many campers to choose from, Frank decided to design his own take on the house car formula. Teaming up with his son, Ronald, Frank custom-built his camper in a barn.

Vintage camper club Tin Can Tourists notes that at first, Frank’s camper–called the Motor Home–was built solely for his family to travel in. Frank’s coach was also distinctive for the day. It wasn’t a motorized trailer or a camping unit bolted to a truck. Instead, it was designed from the ground up to be a camper. This isn’t the first time that someone purpose-built an RV–it could be argued that J. Roy Hunt did the same two decades earlier with the Hunt Housecar–but it was still outside of the norm for the day.

Frank then took his Motor Home on the road, driving it around the country with his family. Along the way, the RV proved to be popular, and people asked where they could get their own. Of course, at the time there was just the sole example out there. There was enough interest that Frank decided to put his Motor Home into production. He teamed up with his son and wife to make a business out of building the Frank Motor Home. They were able to make six more units in 1960 from the trailer manufacturing business, but Frank soon looked for outside help.

To make the Frank Motor Home available to more people, Tin Can Tourists notes, Frank tried to partner up with Chrysler for a chassis and drivetrain. Chrysler reportedly wasn’t willing to work directly with Frank, and instead pointed him to a Dodge truck dealer run by Lloyd Bridges. In a deal penned between the two, Bridges provided the bare truck chassis to help build the RVs. And in exchange, Bridges would be one of the first dealerships to sell Frank’s motorhomes. The Frank Motor Home became the Dodge Motor Home and in 1961, 131 of them hit the road.

The first Dodge Motor Homes used aluminum and had a blocky design. They stayed that way until 1963, when Frank and his son gave the design a major overhaul. That’s the RV that you see here today with this 1963 Dodge Motor Home.

The biggest difference between this beauty and the Motor Homes before it is in the body. Those older Motor Homes sported an aluminum body with a fiberglass nose. This? It was reportedly designed by Frank’s son, who decided that the new iteration of the Motor Home should go with a rounded full fiberglass body. The design was a hit, Tin Can Tourists notes, and Frank Motor Home Inc. was building them at a rate of 700 units a year.

Continuing with this turquoise wonder, under the fiberglass is a supporting steel superstructure, which connects to the frame under the motorhome.

As the brochure notes, this is a Dodge chassis specially modified for the Motor Home, and up front, you’ll find a 318 cubic-inch V8 making 200 horses. Power goes to the rear through a three-speed automatic. Given the Motor Home’s size, I’d expect somewhere around 8 mpg.

At least the engine feeds from a 35-gallon gas tank.

Inside, you get many of the amenities of an early 1960s car and home. The helm features what looks to be somewhat comfortable bucket seats. Gauges are what you’d expect with oil pressure, coolant temperature, and more, but what sticks out here (literally) is the push-button selector for the transmission. The brochure highlights a standard Mopar transistorized radio with just a single speaker firing out above the windshield.

A second speaker was an option, but it appears that the camper doesn’t have it.

Moving back, there’s what appears to be a combination living room and dinette. Seating in this rig is turquoise to match the exterior and I absolutely adore it. Aft of there is a kitchen featuring a double sink and an oven. Across from that is the bathroom. The Dodge Motor Home was touted as the ultimate way to travel and it seems to have everything you’d need for glamping on the road.

There’s even an air-conditioner, heating, and a 5,000W generator. Holding tanks seem pretty decent, too. You get 35 gallons of water and 30 gallons of waste. The RV supported two 28-pound propane cylinders, though those have since been converted to 20-pound cylinders.

This is all to say that this is a piece of history that you could use today without updating. It’s not said how much of this Dodge Motor Home is original, but the listing says that the selling dealership replaced the RV’s flooring, fixed its plumbing, reupholstered the seats, and more. One thing’s for sure, and it’s that this rig is a beauty.

In 1964, Travco Corporation of PRF Industries took over control from Frank Motor Home Inc, creating what was advertised back then as the Travco/Dodge Motor Home. PRF Industries later ran into roadblocks in the 1970s because of the Oil Crisis. Then, 1979 marked the end of the Dodge M300 chassis, leaving nothing for the Travco/Dodge Motor Home to ride on. PRF ended up selling Travco to Foretravel, who kept the body around until 1990. By the end, the body hadn’t changed much, but the interior increasingly looked like a palace.

As for Frank, after PRF took on his motor home company he went on to develop Xplorer Class B van campers. But his legacy is far more than just making campers. Perhaps most important to RV history is what the Motor Home did to how we talk about campers. As the Dodge Motor Home became more popular, the term “motorhome” began to overtake “house car.”

If you’re interested in this 1963 Dodge Motor Home, it’s currently bidding at $10,000 with two days to go on Bring a Trailer.

Mercedes is a lifelong fan of all things powered by an engine. When she isn't driving one of her five Smart Fortwos or her 14 other vehicles she could be found in the cockpit of a Cessna 172 or perhaps swimming in any body of water that she could find. She also has a deep love for buses of all kinds. Please send her buses. mercedes@theautopian.com Instagram: @mistymotors Twitter: @Miss_Mercedes30 Facebook.com/neonspinnazz
Read All My Posts »
PrevPreviousOur Daydreaming Designer Imagines If A Favorite Tonka Toy Came To Life
NextLet’s Figure Out The Best ‘Worst Car’ From Those Stupid Lists Of ‘Worst Cars’Next