Whether it be Pokemon or American Girl dolls, with kids there is often that desire for toys to come to life in some way. Pokemon has an augmented reality app. There are supposedly American Girl Doll movies where actors portray the dolls; children dress like their dolls and watch those movies (and the children’s moms might dress like that too; yes, I’ve seen this shit go down). However, for a GenXer like myself, the dream of a certain car plaything coming to life never happened. I wanted to see what it would look like if it had, so I made a few sketches.

If you’re thinking Hot Wheels toys, it’s obviously already been done. The one I’ve seen is the famous ‘Twin Mill’ dual engined car that was made into a life-sized vehicle:

However, the toys I have in mind are Tonka trucks. No, I am not referring to real life Big Three Bro-dozers with TONKA lettering on them rolling coal on the streets. The ones I am talking about we received as new or handed down to us from older siblings.

Back in the Malaise era, Tonka offered my bowl-hair-cut child self some cabover-style toy trucks in different sizes that looked nothing like what was on the road at the time. It was obvious that some car design school graduates got jobs at the company and decided to throw some futurism into the mix.

They look much like cool cabover show cars such as the Dodge Deora:

I dreamed of what these Tonkas might look like as real vehicles, of course, cutting taillights and side marker lamps out of construction paper and taping them on to make them street legal for the United States (are you proud of me, Torch?). Still, what if that dream came true? How could it happen?

The alternate reality I have in mind is a bit of stretch, but not totally impossible. If you look at the early seventies, the small pickup truck market was starting to heat up with Japanese imports, all of which were very traditional pickup in design. There was the VW Bus pickup, of course, but the infamous Chicken Tax made that too expensive to import.

General Motors needed a quick hit, so their choice was to import trucks from their partner Isuzu and brand them as Chevies. The LUV (light utility vehicle- get it?) was a minor hit, as were the captive import trucks from the other Big Three (Mazda for Ford, later Mitsubishi for Chrysler).

However, what if GM did what it often used to do, meaning throw gobs of money into a brand new concept that only the world’s largest corporation would be capable of? A real clean sheet of paper approach instead of just scaling down a C10 or F150?

Also, years later, The General co-opted the Hummer name for trucks with great success. What if they had worked together with the famous toy company to make a Tonka branded small truck? Not only that, what if the truck looked like the toy your dad kept tripping over because you left it on the kitchen floor AGAIN, DAMMIT?

This style of Tonka truck always looked like something that you might throw onto a VW chassis, like a Brubaker Box. However, cool as it was, we know that General Motors had very limited success with their attempted Volkswagen Bus and Bus Pickup competitor, the Corvair Greenbrier with the available ‘rampside’ door that folded down: 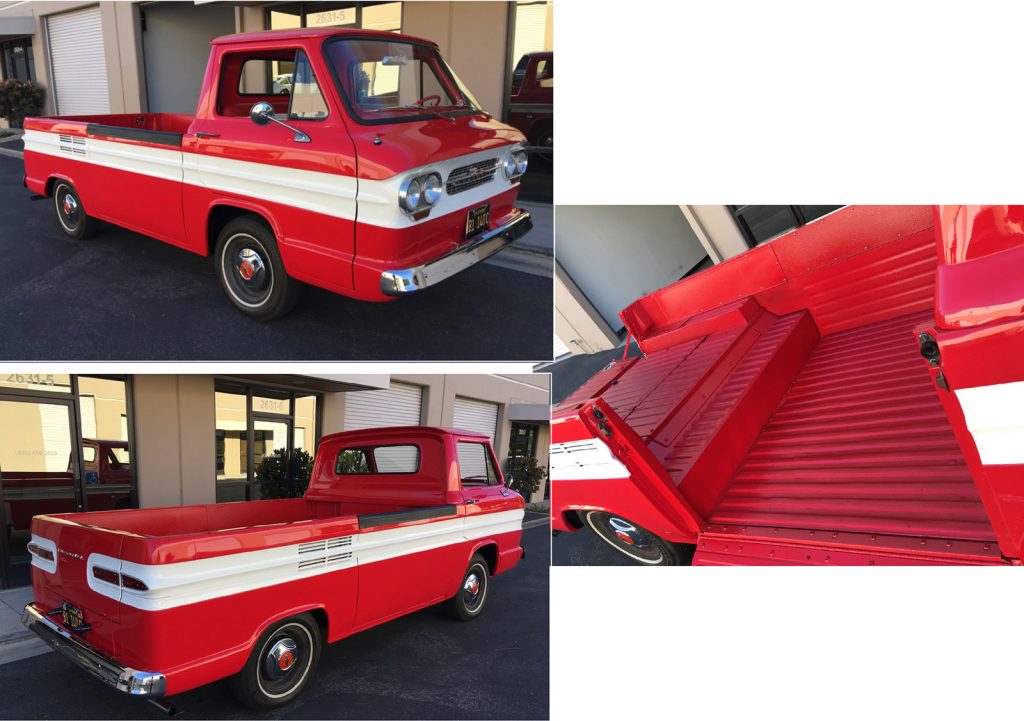 Still, it seems like some of the elements were there in the Greenbrier for a successful cabover-style truck if we were to alter some of the specifications, such as:

-The ramp is an interesting idea, but people really want a long, flat floor

-The rear engine is fine, but making it mid-engined would prevent any chance of snap oversteer, PLUS we could add a live axle for economically making greater load capacity cheaply.

-Air cooling has to go; Americans typically hate the noise and lack of a real heater. Also, the fan belt on the Corvair motor went at a ninety degree angle and broke regularly. 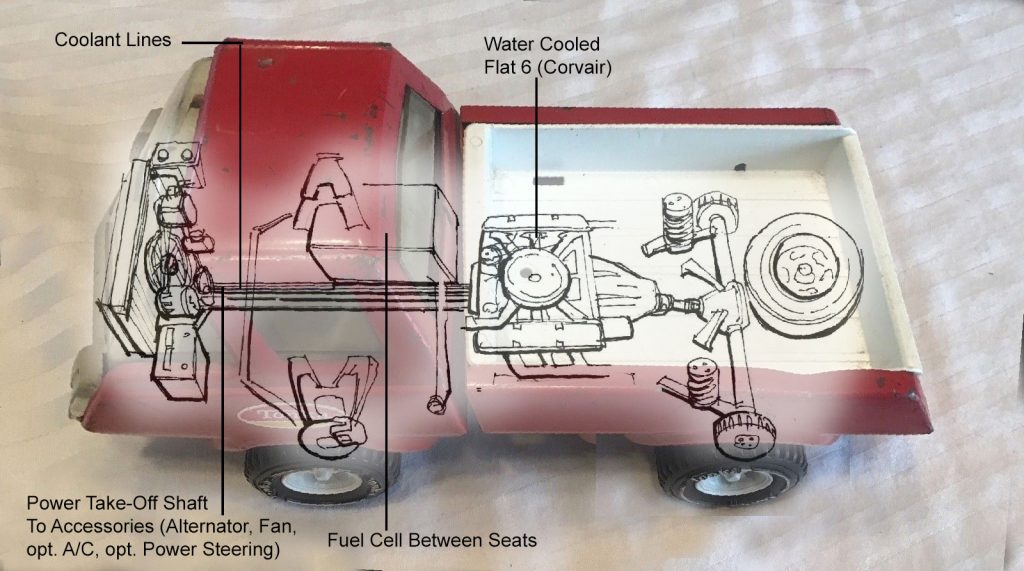 Admittedly, it isn’t really a cabover in the traditional sense, which is better since you aren’t sharing space with the motor up front. Note that the spare can fit in back below the bed, a bump out below the tailgate (behind the rear license plate) providing room.

I would stretch the wheelbase to move the rear wheels back a bit to stop a hobbyhorse kind of ride. Since this layout is quite similar to the later Toyota Previa, this truck could do the same trick and use a power take-off/jackshaft to run accessories up front like the radiator fan, optional power steering, available air conditioning, and alternator. The engine would be essentially just like a Corvair flat six but with a water jacket, so this would have some power for the time (in a relative sense).

Still, the looks of the thing were what I found, and I’d want to do whatever I could to preserve it. 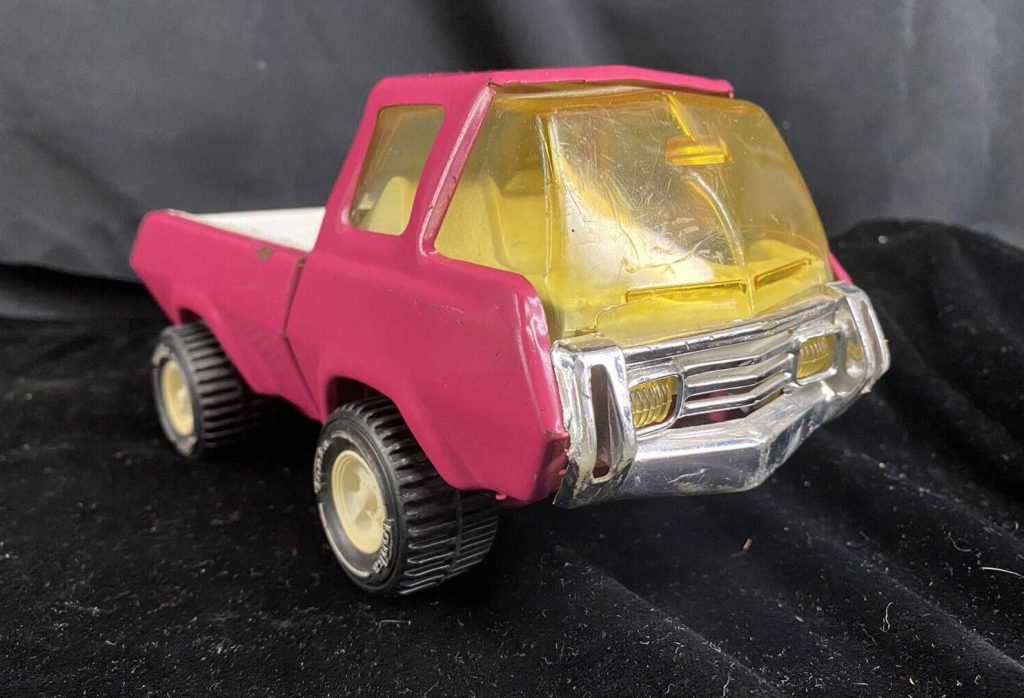 I’ve made some Photoshop changes to ‘productionize’ an example that I saw on ebay. This example of the toy is a bit beat up, likely because of crazy assed stunts that were done with it similar to what I might have attempted in the back yard circa 1977. Imagine one image being of the toy and the other being a scale model of the actual truck: 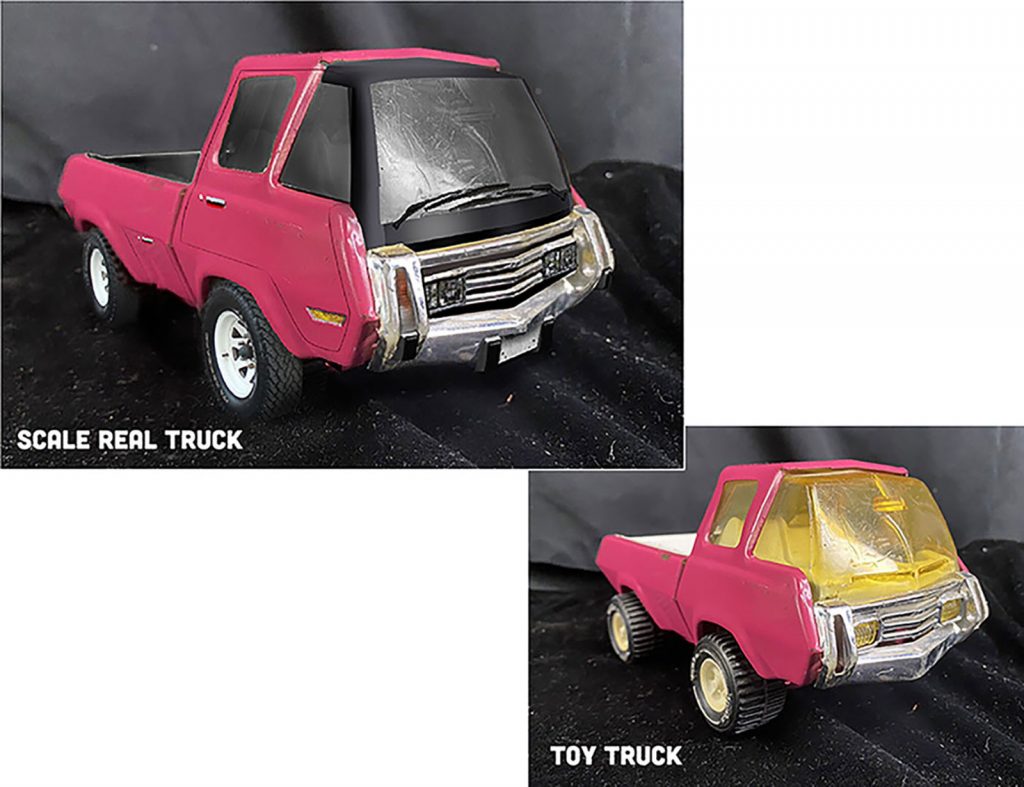 Making this as a real truck, certainly the big glass thing up front couldn’t work, so we’d need to add some breaks that could be painted black to at least help keep up the ruse of a big greenhouse in front. If we launch in at least late 1974 we could legally use four rectangular lights. You can see that I’ve added turn signals into the side openings, as well as bumper guards below

I tried to integrate the side markers, signals, and rear lights into the look as best possible, just like I did with the paper stick-ons decades ago. Parts Bin Puzzler, go for it in the comments (clue- they’re all GM items) and I’ll let you know! 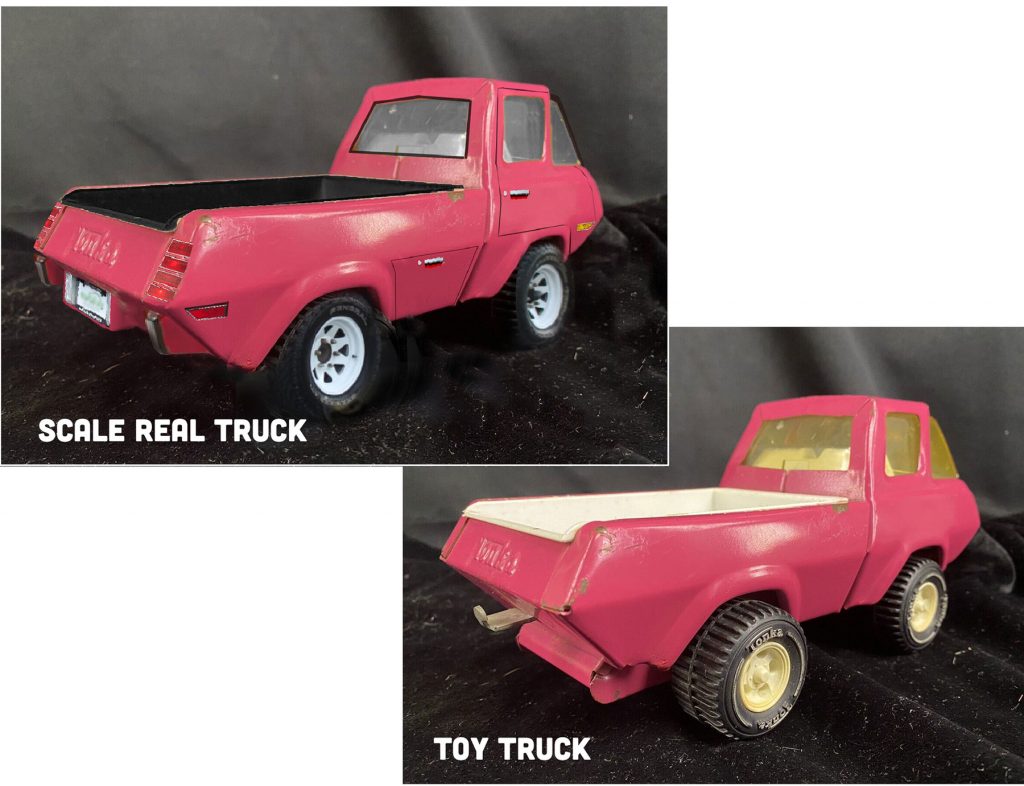 There would be space left over flanking the engine below the bed, and we could make it accessible for storage with doors on the rocker panels that open to small bins: 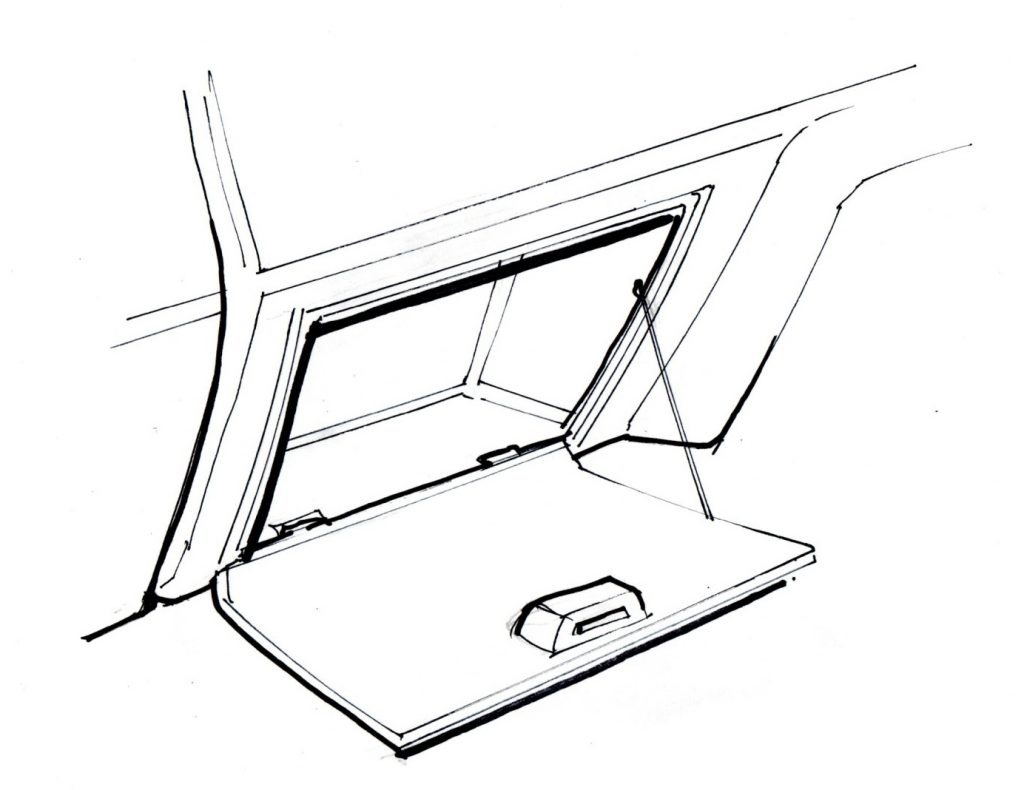 That interior of the toy always struck me as particularly funky, especially the TONKA letters molded on the dash visible to the outside of the toy: 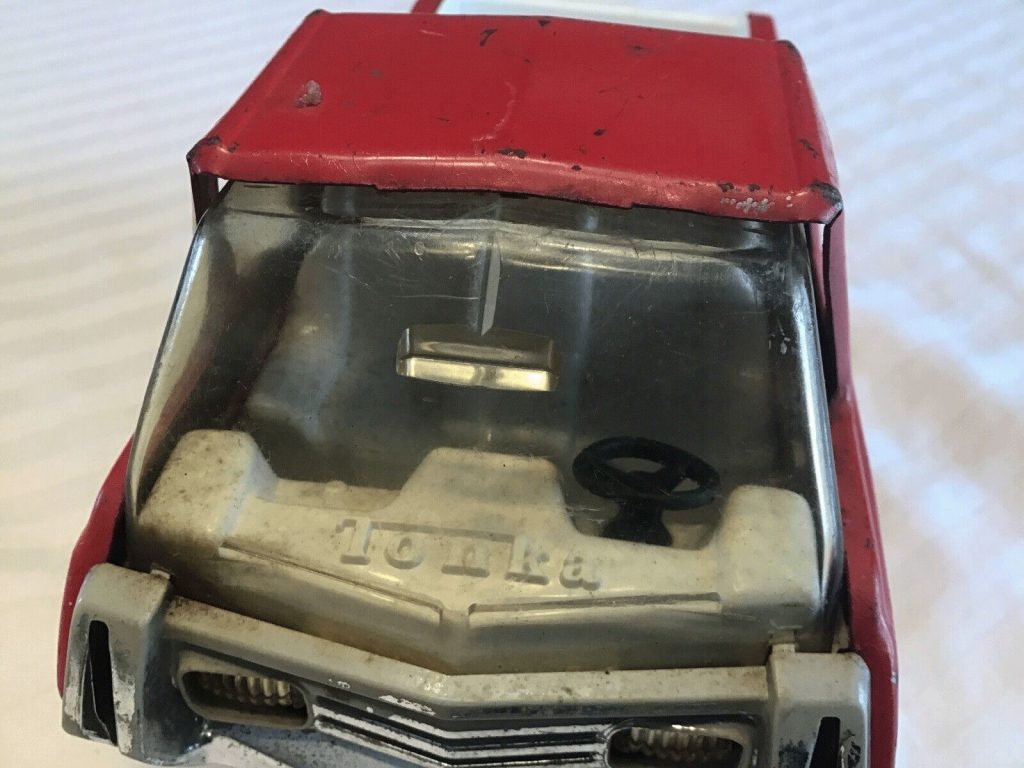 Also, the double-sculpted dash does not appear to have anything directly in front of the driver and passenger, so my interpretation would be to have storage bins there and the gauges and controls mounted on those center and side pods that extend closer to the occupants. Speedo and fuel are at the center of the dash. Switches, knobs will all be recognizable as GM parts bin shit. You’re looking at a fully optioned truck so you can imagine that a stripped out one would have a dash full of blanking panels and ‘coin tray’ holes like on the passenger’s side ‘pod’. Yes, it’s a seventies GM product so the optional A/C would include ‘ball coolers’: 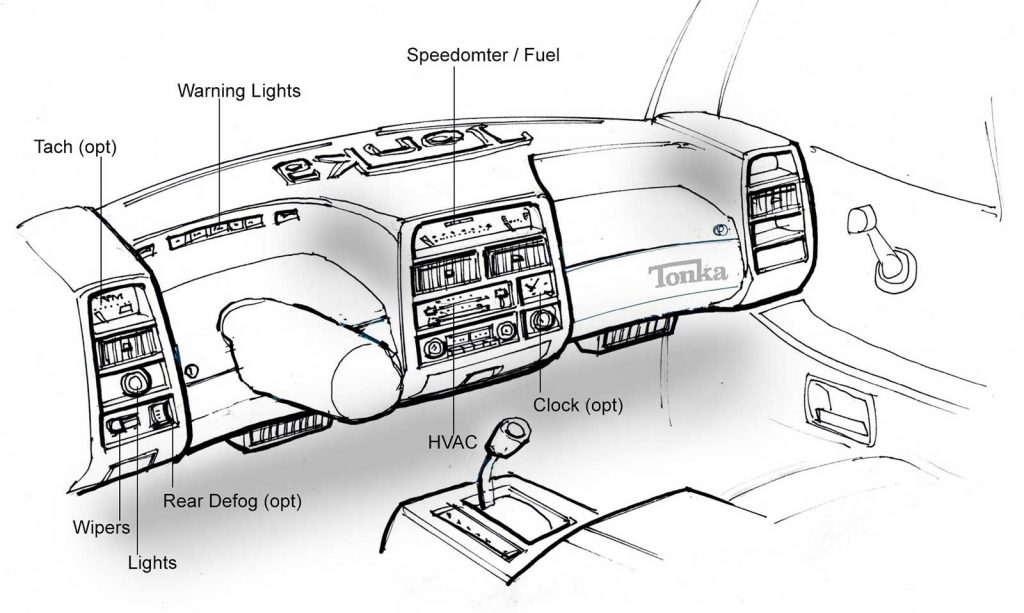 Also, I did a search but Tonka never did a van version of the bigger toy (that I could find), but you just KNOW that we would have to do make one, beating the Caravan to market by a decade and undercutting the price of the much, much slower Volkswagen Type 2.  We’d have a window version and an ‘if-this-is-rocking-don’t-come-knocking’ bubble window edition as well. 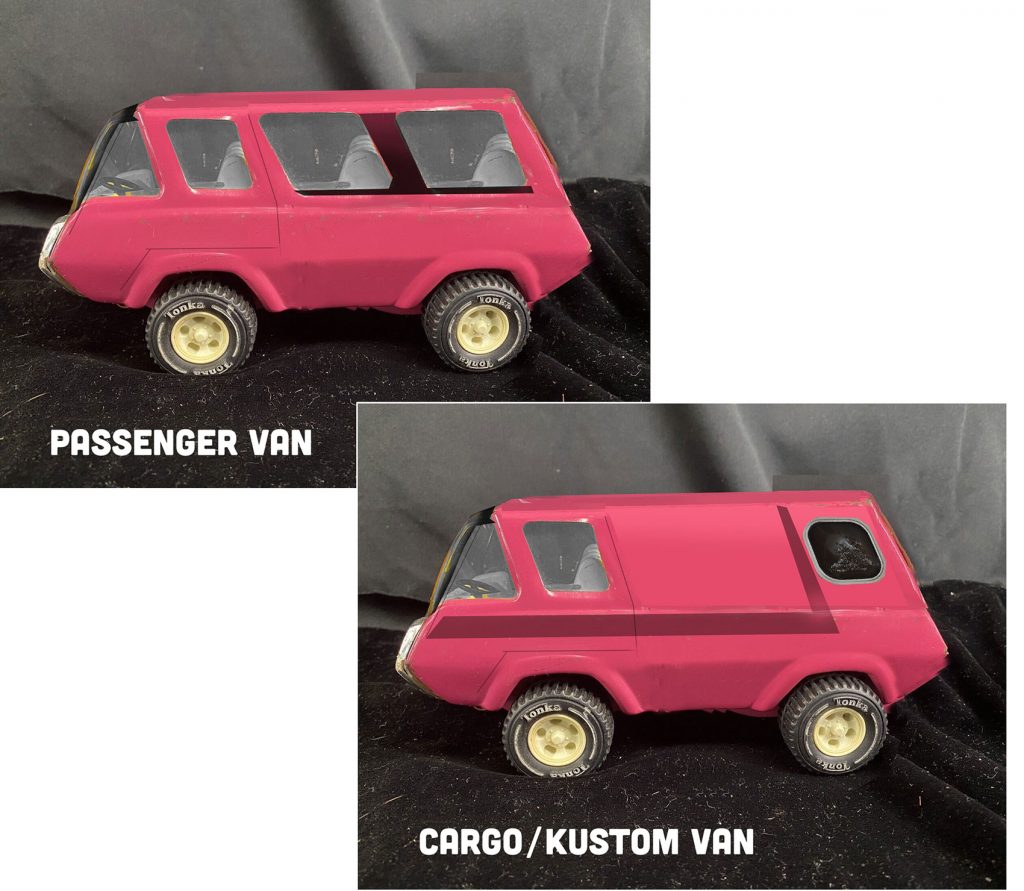 Look, I’m well aware that this thing would cost far more to engineer and develop than just importing some reliable-as-hell (but-rusts-out-in-ten-minutes) Japanese body-on-frame conventional truck. Still, the idea of a long bed in a short overall length is appealing, and with the mid-engine and show car styling, comparing this thing to some leaf-sprung Ford Courier would be like comparing a Winnebago to a GMC Motorhome.

Ultimately, I just don’t care about sales. I just like the fact that as a kid you could have had a pressed steel Tonka toy truck and your mom could have owned an IDENTICAL purple truck, but it would be real. That is, if your parents were cool like that. The fact that my mom drove stately-ass stuff like a Volvo 245DL and that E39 wagon Mercedes Streeter drives now should tell you that was never, ever going to happen for me.

Regardless, my primary goal was to make a dream come to life, and if others bought into my weird vision, all the better. If moms can take their daughters to hundred-dollar lunches at American Girl Cafés with their dolls, there’s no reason we can’t have real Tonka trucks.

Read All My Posts »
PrevPreviousIt’s Wrenching Wednesday! Autopian Members: Let’s Talk About Your Car Projects And Problems
NextThis Gorgeous Turquoise Time Capsule Was Designed By The RV Pioneer Who Coined The Term “Motorhome”Next