This Might Be The Upcoming Dodge Hornet Compact Crossover 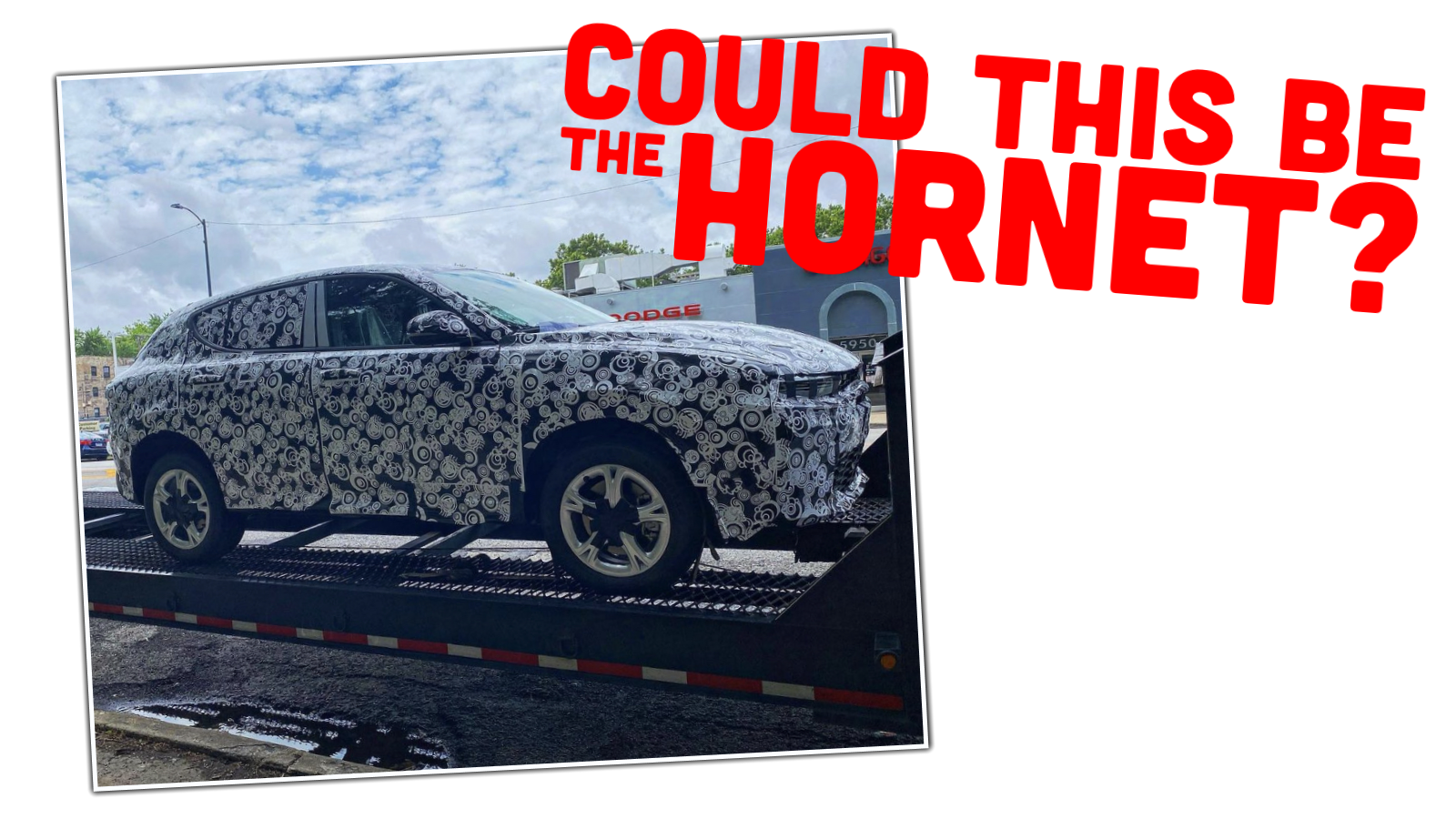 Don’t you just miss proper spy shots? It seems all too often that manufacturers post images of their own future product all camouflaged up, bypassing the thrill of the chase. Thankfully, we have something to ease those fake spy shot blues. Carspotter, enthusiast, and overall great guy Sol Marburg spotted a stickered-up compact crossover on a flatbed trailer, and there’s a good chance it’s the new Dodge Hornet. Let’s dive into what we can discern from Sol’s pics of what may be Stellantis’ new high-volume model for Dodge.

Let’s start with what we know about the Hornet. The Detroit Free Press reported in April that Dodge CEO Tim Kuniskis dished out a little bit of information on Dodge’s new baby.

“I think we’ve actually even said when we get back into the small compact space this summer when we launch the Hornet, we will have a PHEV or variant of that,” said Kuniskis, referencing the abbreviation for plug-in hybrid.

Alright, so Dodge is talking about a C-segment product with some sort of plug-in hybrid variant. What vehicle already exists in the Stellantis portfolio that matches this description and will be homologated for U.S. sales? How about the Alfa Romeo Tonale, Alfa’s c-segment crossover. Indeed, put the disguised crossover up against the Tonale, and the greenhouses are identical. Sure, the rear side window looks a touch more angular, but that’s a trick of the camo. We zoomed in and found the camouflage is simply pasted over the window trim. 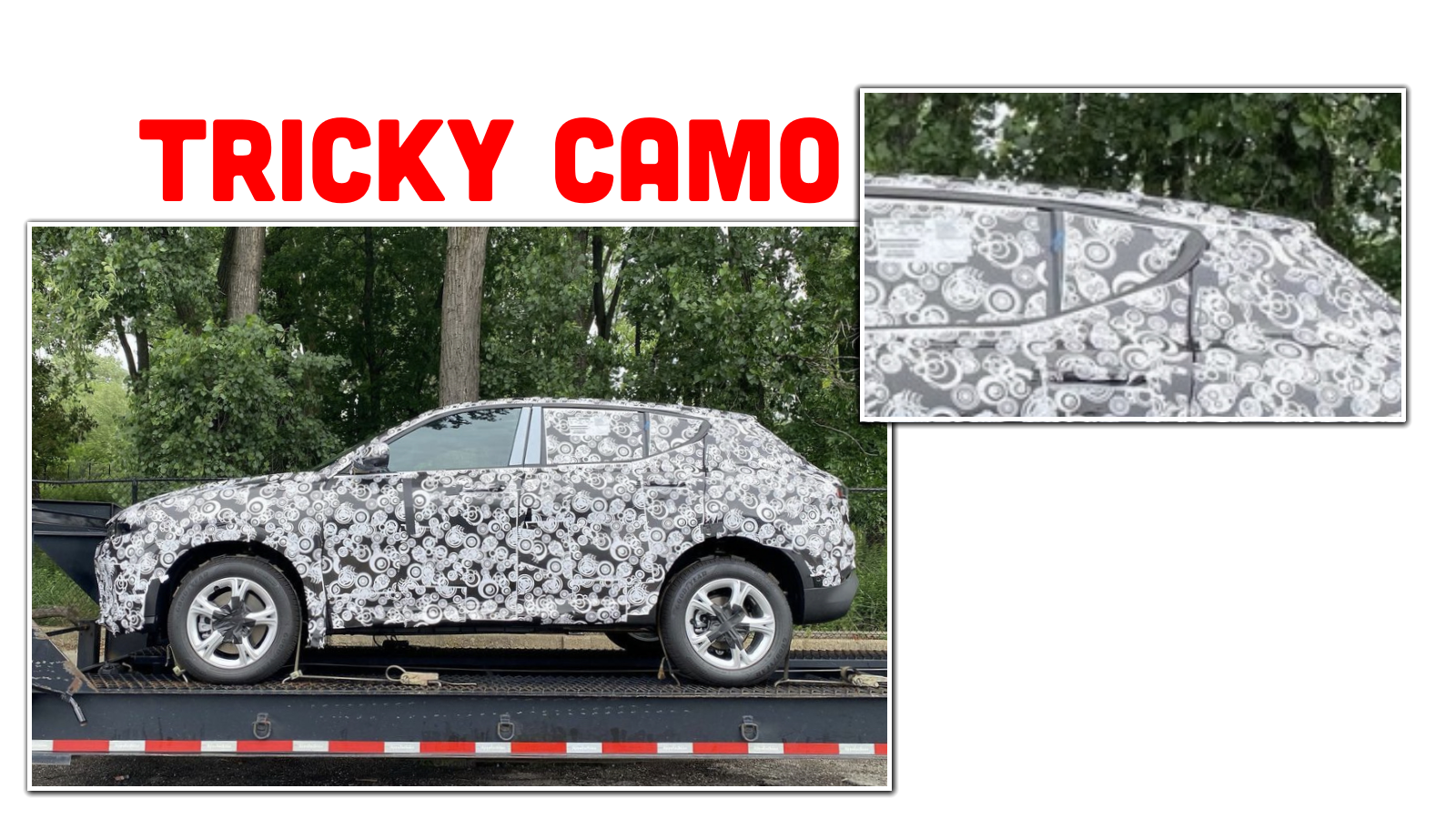 Gaze at more shapes, and even more similarities between this crossover and the Tonale appear. The cut line for the rear wheel arch trim appears identical, as does the dash-to-axle ratio. So then, what exactly is different here? Well, there are a few touches along the side that seem distinct from Alfa Romeo’s styling. The character line on the left side skirt adopts a grander upwards sweep and terminates farther back on the sill, the lower rear valence adopts a different profile, and the front end appears more blunt. Yes, visible changes around the side appear minor, although the front end is a very different story. 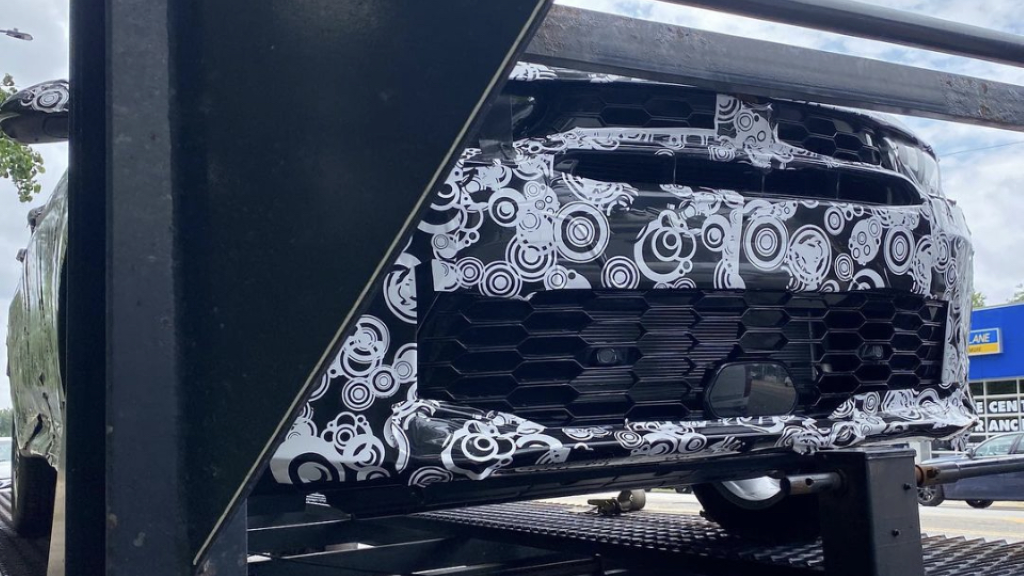 While the design of the trailer prevented Sol from capturing the full front fascia of this disguised CUV that may or may not be the new Dodge Hornet, his picture still gives us plenty of design clues. For starters, the Stormtrooper/mail slot upper grille setup from high-output Chargers and Durangos makes an appearance here, although the camouflaged patch in the center of the grille is quite interesting. Could it mark the appearance of Dodge’s Fratzog logo? Perhaps, although there’s an equal chance it’s a red herring.

What’s not left to speculation is the massive lower grille with squished honeycomb mesh. While a significant portion of this lower grille appears to be blocked off, there’s still a surprising amount of open frontal area for cooling. Speaking of things not left to speculation, check out the massive sensor low in the front grille. It’s likely a radar unit, although the glossy face is quite curious. Many cheaper cars feature matte faces to their radar units to match matte grilles, so there’s the chance a self-healing coating is at play here to protect the radar unit from stone chips. Also worth noting, check out those cheekbone-like lines on the front fascia. They should do a decent job of breaking up the painted surface of the front bumper and making the front end look less heavy. 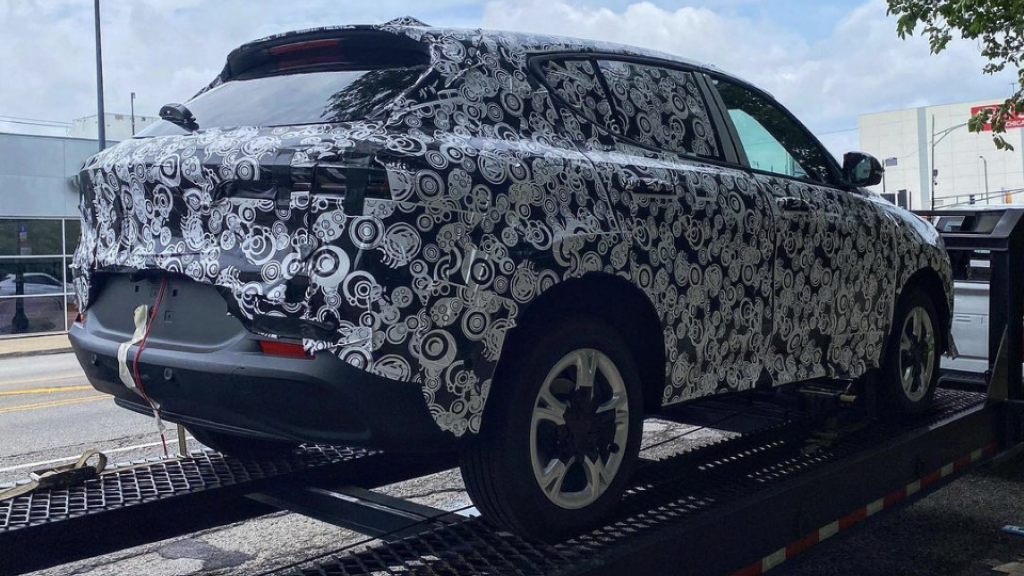 Around the back, whoever camouflaged this little crossover certainly did so well. General tail light shape is rather difficult to make out, but I spy a tiny, undisguised clue. If you look at where the right tail light should be, there’s a chunky dark red strip that runs across the corner of the vehicle and onto the tailgate. Given the Tonale’s heckblende full-width tail light treatment, I wouldn’t be surprised if this crossover also wears a heckblende. Whether or not it’s some variation on Dodge’s racetrack tail light treatment remains to be seen. Moving away from speculation and towards observation, I’m seeing a completely exposed lower fascia that’s quite different than what we’ve seen on the Alfa Romeo Tonale. Instead of faux vents and glossy plastic, we’re looking at a matte, unpainted plastic piece with proud parking sensors and an entirely different curvature. 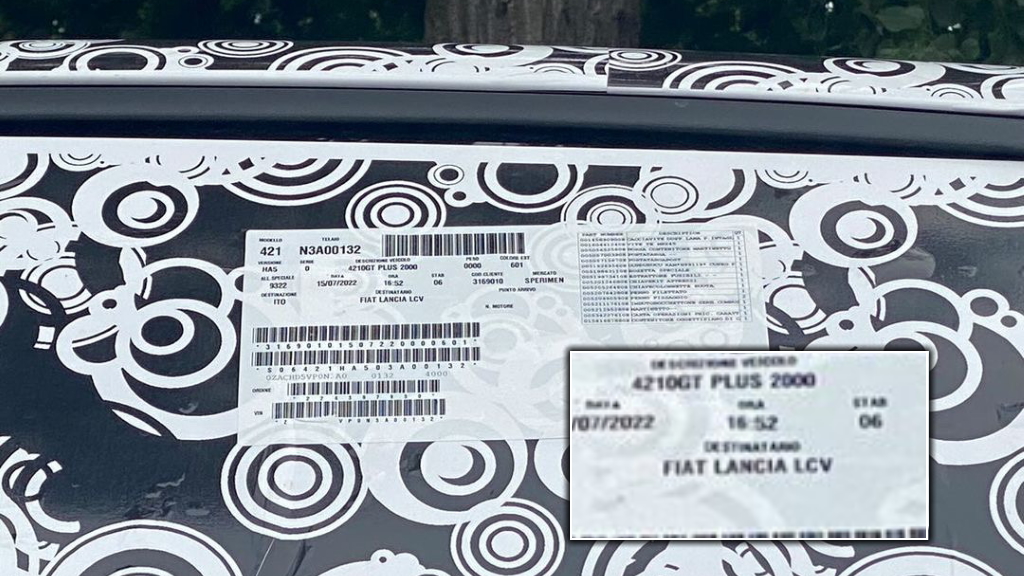 So, apart from some very familiar styling cues and the fact that this crossover was spotted right outside a Dodge dealership, what makes me so sure that this is a Stellantis vehicle? Well, check out this shipping label that has Fiat Lancia LCV printed clear as day on it. A C-segment crossover would be a huge vehicle for a brand like Dodge, seeing as compact crossovers are so wildly popular. While Jeep has been largely positioned to be Stellantis’ SUV brand, consumers have an insatiable thirst for these small crossovers, so stealing a few sales from the Honda CR-V and Toyota RAV4 seems like a fairly worthwhile pursuit.

In any case, it appears that Sol spotted a lower-trim vehicle as the small-looking wheels and unpainted trim point towards a fairly reasonable price point. Truthfully, the timing of this spot feels right considering how Dodge plans on unveiling the Hornet during its Speed Week even between Aug. 15 and 17. Stay tuned in roughly three weeks to see if this stickered-up crossover is indeed the Dodge Hornet.

All photos above courtesy of Sol Marburg

[Editor’s Note: I figure I should add a few BONUS spy photos, since Dustin, the Detroit area-native who bought my 260,000 Lexus LX-470, sent me these: 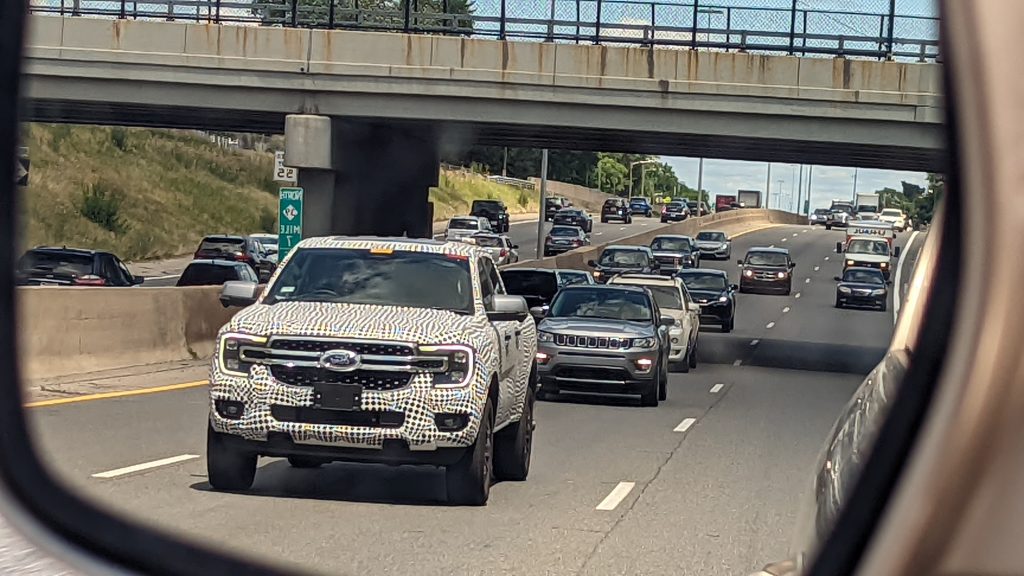 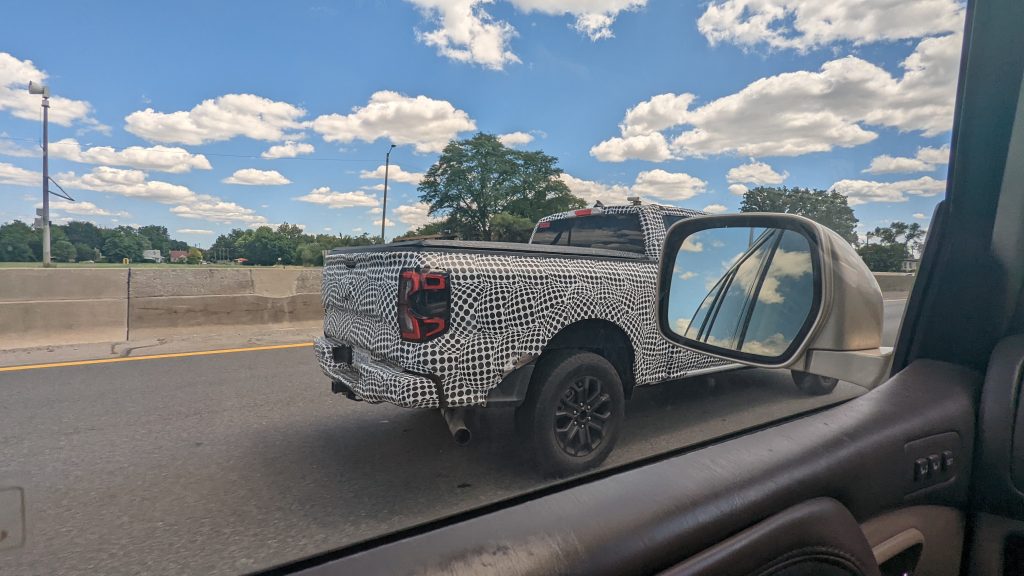 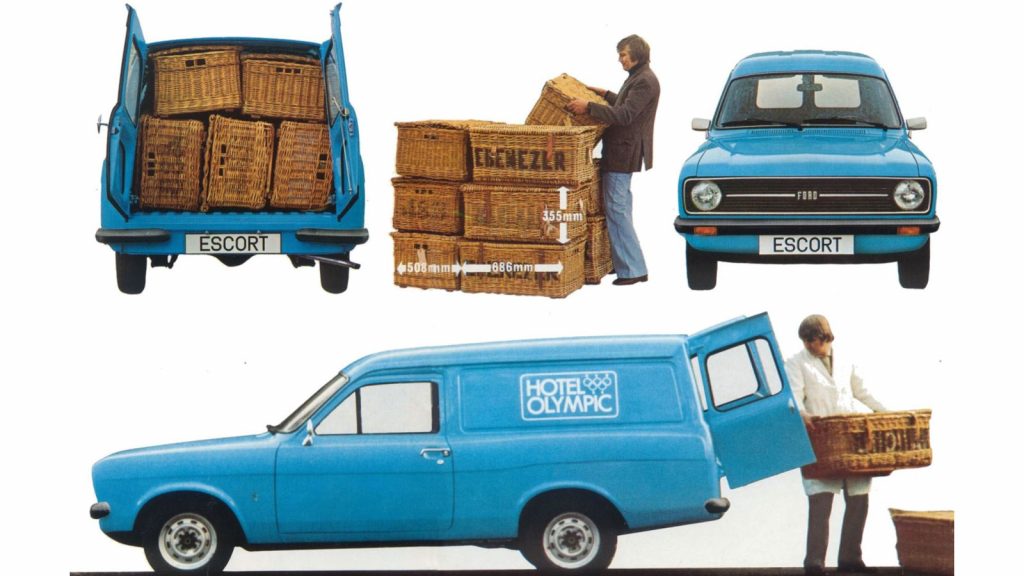 Thomas is a Nu Rave-blaring, heel-toe downshifting, maple syrup-swilling, chassis-geeking, junkyard parts-hauling, floppy-haired scenester who's been writing about cars since college. His current ride is a 2006 BMW 325i with the six-speed manual gearbox. Instagram: @thomas.hundal Twitter: @thomashundal
Read All My Posts »
PrevPreviousStickshift Cars Not For The Faint Of Heart: 1975 Jensen-Healey vs 1976 BMW 2002
NextQuick Question: Where Should The Rear Defroster Button Go And What Should It Look Like?Next