Welcome to another Shitbox Showdown! Today, in my contuing efforts to spread the pins in the map out a bit, we’re heading to the Midwest, to look at a couple of Iowa farm trucks.

But first, we need to see which weird engine layout you’re leaving Delaware with:

I’ll be damned. From the vocal support for the Suzuki in the comments, I expected this one to be closer. But that’s about as big a blowout as we’ve ever had.

The middle of the country is a big flat enigma to a lot of coastal natives; they just can’t grasp why anyone would choose to live there. There’s the boring scenery, the harsh winters, the hot summers, the rust, the massive distances to cross to get anywhere… actually, maybe they have a point. But what the heck, I’m a proud Midwestern native, and I have a lot of fond memories of what so many others blithely call “flyover states.” So let’s head for the plains, and check out a couple of weather-beaten pickup trucks. 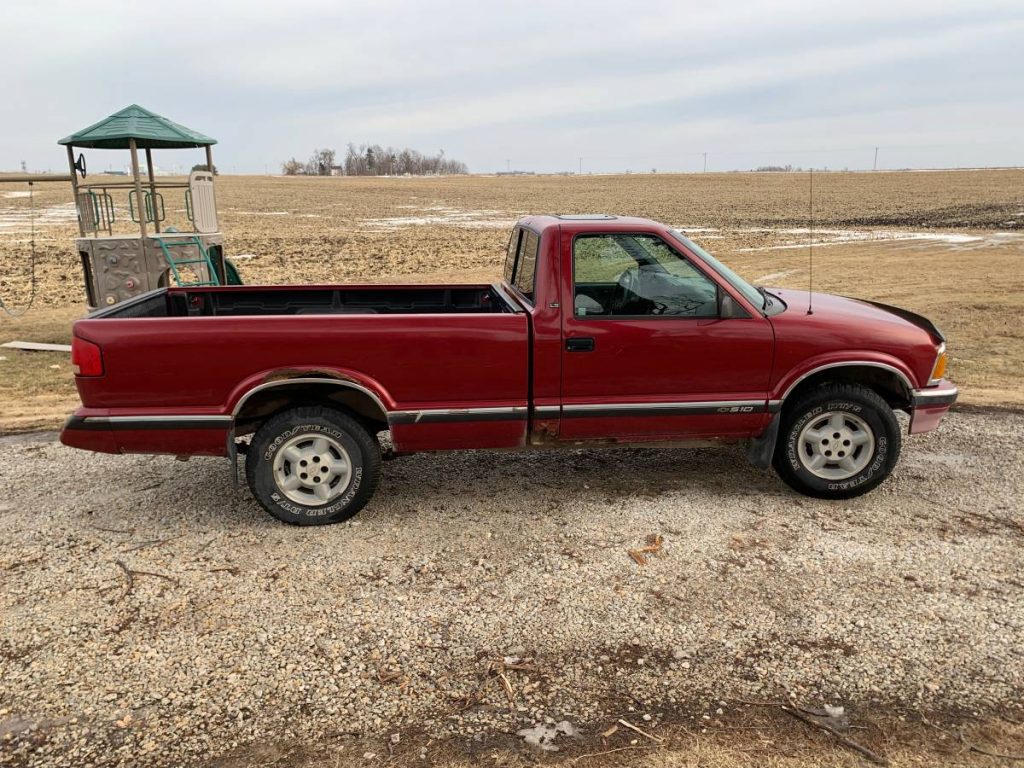 Chevy’s second-generation S-10 pickups were often overshadowed by the Ford Ranger and Toyota trucks, and unfairly, I think. They were handsome trucks with two good engine options that no longer included the anemic and trouble-prone 2.8 liter V6. Instead, the optional engine in the later S-10 was a 4.3 liter V6, basically a small-block 350 minus the front two cylinders. This one sends power to all four wheels on demand through a four-speed automatic. 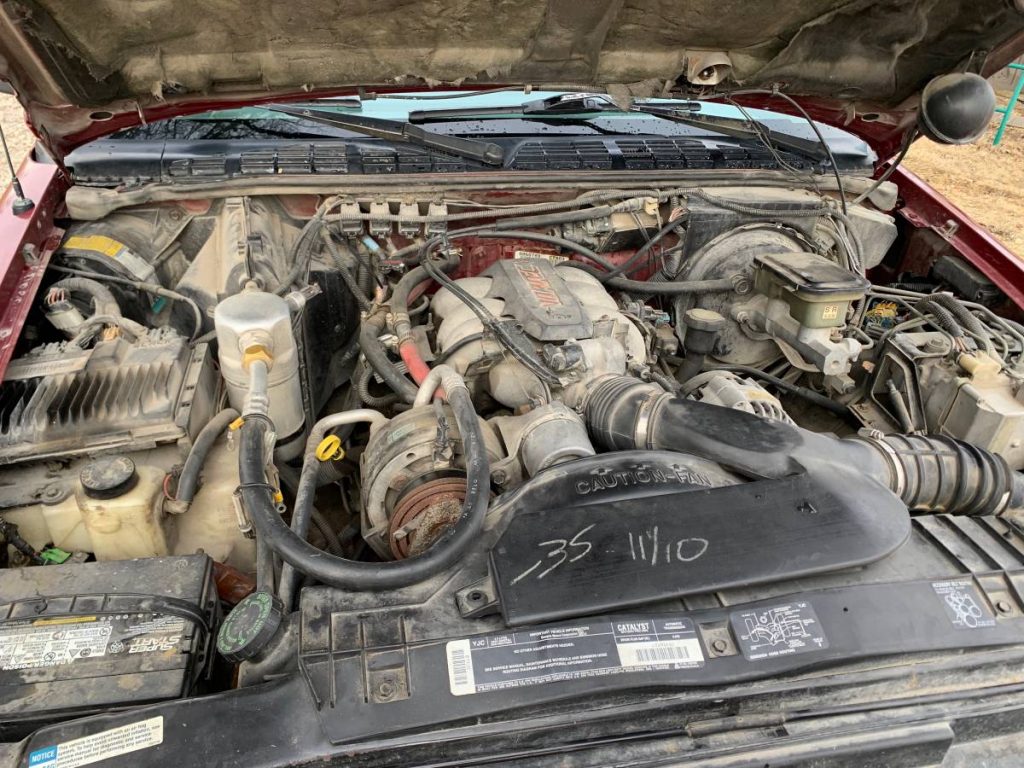 Now, I know this crowd well enough by now to know that the automatic will draw a lot of complaints. It won’t last, you’ll say. It’s a ticking time bomb, because you don’t know how well it was maintained. But here’s the thing: this truck has already passed a quarter million miles. If transmission troubles were going to happen, they have happened already and been remedied. Pull the dipstick, look at the fluid, and if it looks good and doesn’t smell burned, you can probably safely assume it’s fine. If you just don’t like automatics, that’s fine too. Just sit tight; the other truck is a stick. 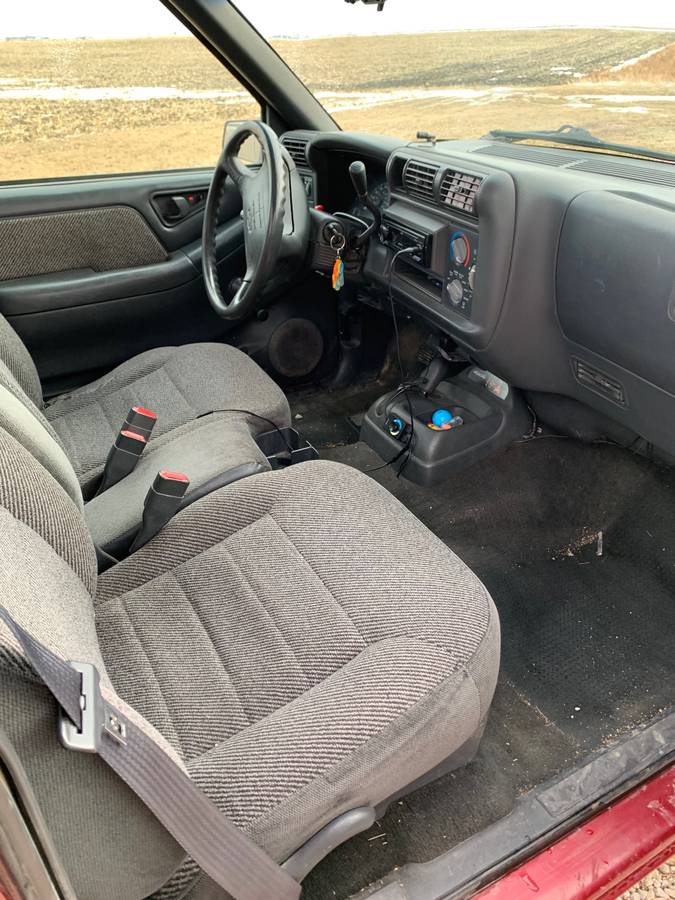 The ad for this little Chevy includes a laundry list of recently-replaced parts, and the seller says it runs fine. The inside isn’t trashed, either, like so many hard-working truck interiors are. So what’s the catch? 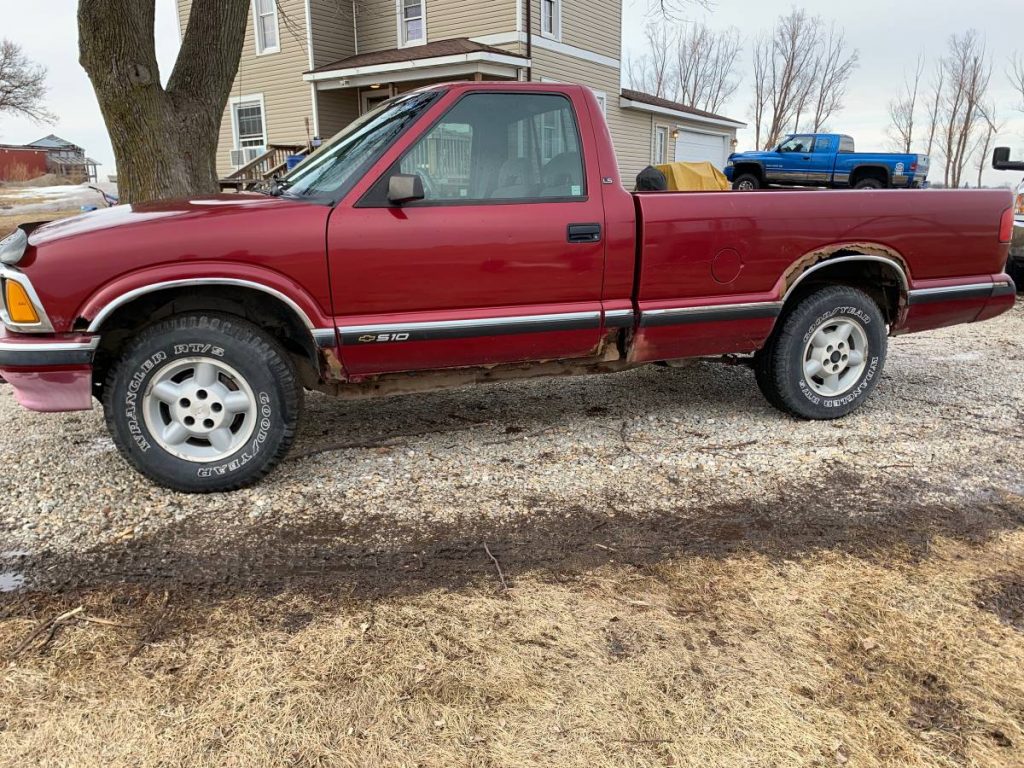 Ah. Right. That old Midwestern automotive nemesis. Rust has not slept, nor even taken a minute to rest its eyes, when it comes to this truck. The driver’s side rocker panel and back cab corner are gone. Not even there any more. And the passenger’s side isn’t far behind. The gap between the can and bed looks all right, so nothing is sagging, but it might be wise to fire up the welder and put some metal back where it belongs, not to make it pretty again, just to hold it together. 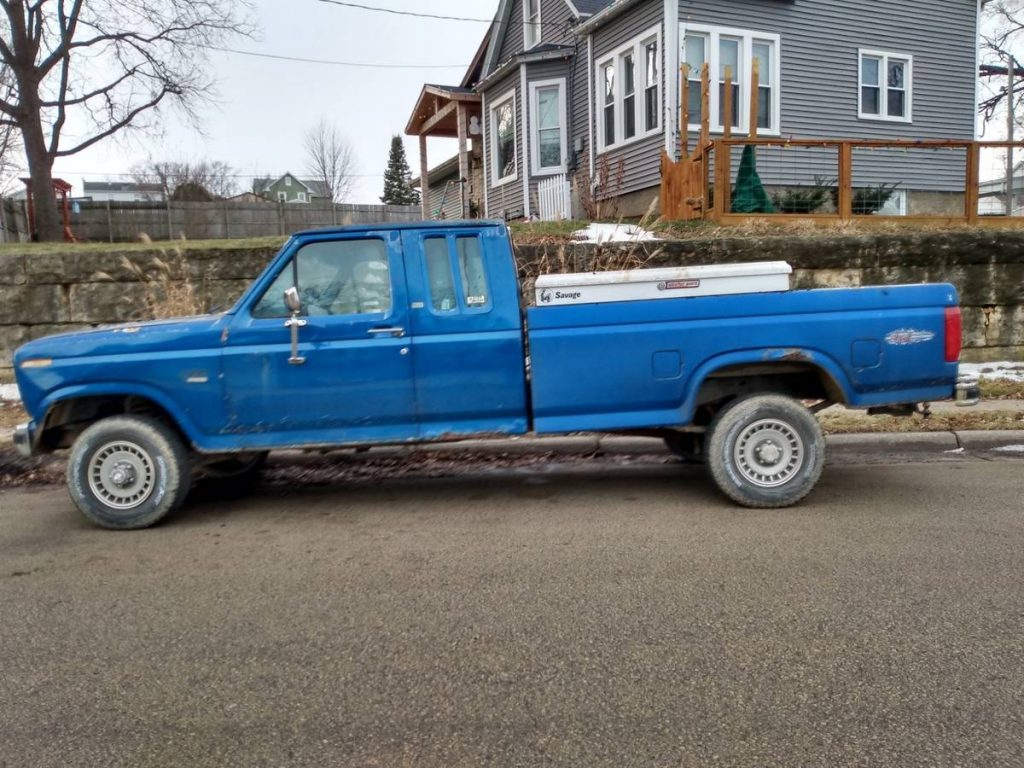 Runs/drives? “No problem” the ad says

Need something a little bigger than an S-10? How about big blue here, all nineteen and a half feet of it? This extended-cab, long-bed version of Ford’s venerable F-series has a wheelbase longer than a lot of economy cars’ overall length: 155 inches. Maneuvering this beast around must be a real chore; it probably has a turning circle the size of Madison County. 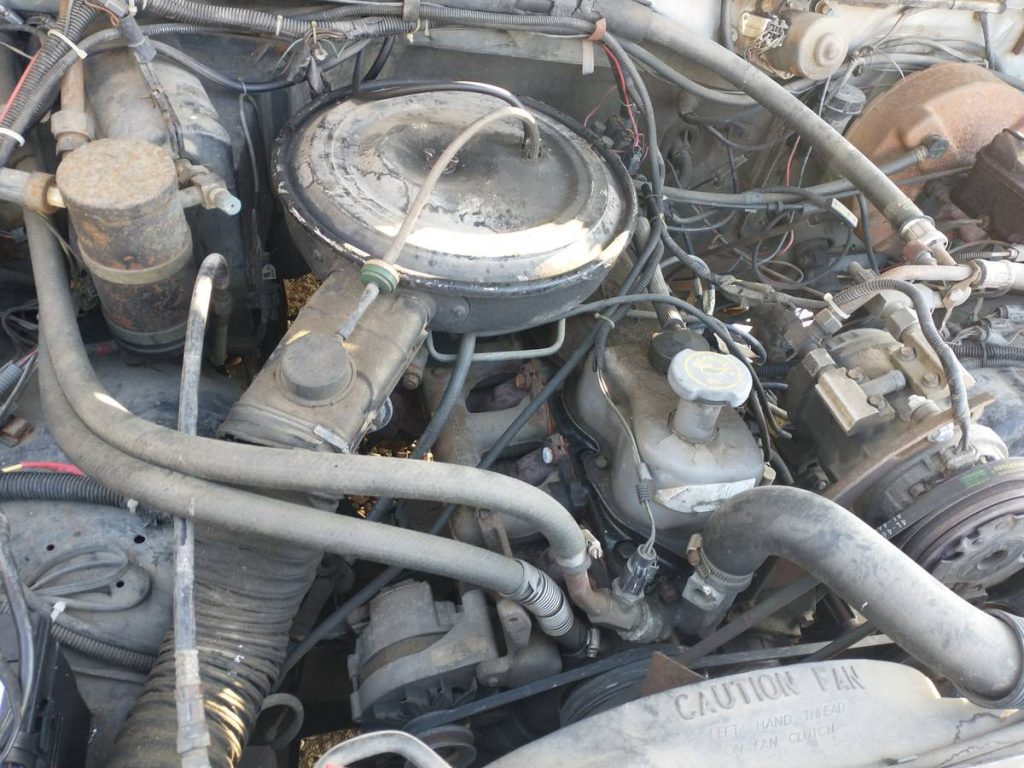 Propelling all that massive length is an equally long engine, Ford’s classic inline six, here with a one-barrel carburetor and its accompanying rat’s nest of vacuum lines. It’s backed by a four-speed stick and 4WD for getting out of muddy fields and snowdrifts. With a six in this truck, you can expect tectonic plates to beat you in a drag race, but few engines will chug along as relentlessly. Even better, this is a remanufactured engine with fewer than 10,000 miles on it. 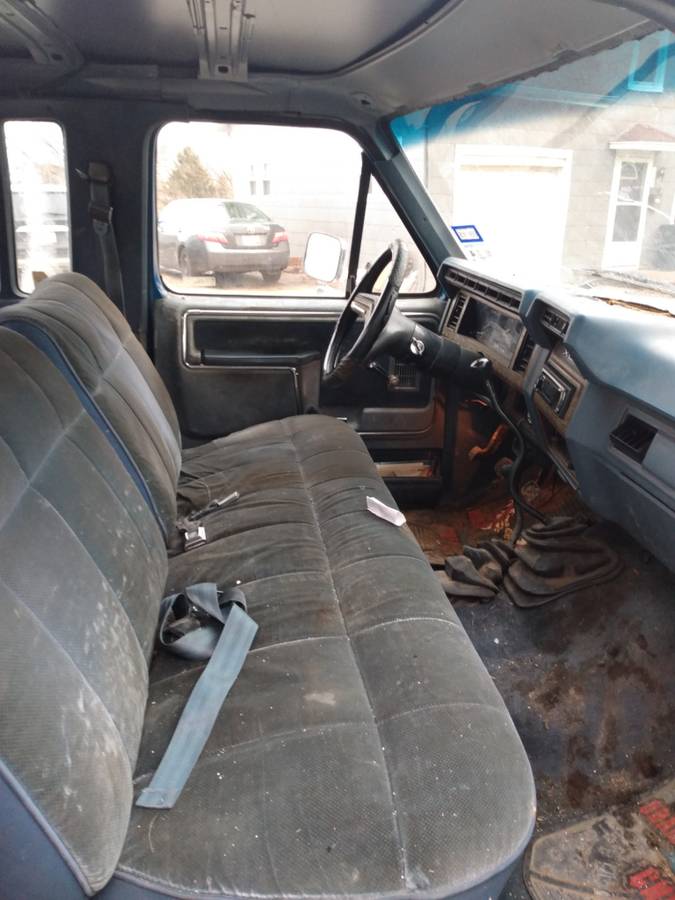 This truck has clearly been worked hard, and has earned its keep. The five-digit odometer has been around twice already and is well into a third trip. Based on the toolbox and what looks like drywall dust on the seat, I’m going to guess this truck was used by a contractor instead of a farmer. The seller says it spent most of its life down in Oklahoma, where the wind comes sweeping down the plain (I’m in a musical mood today, I guess), but the trucks don’t rust as badly. 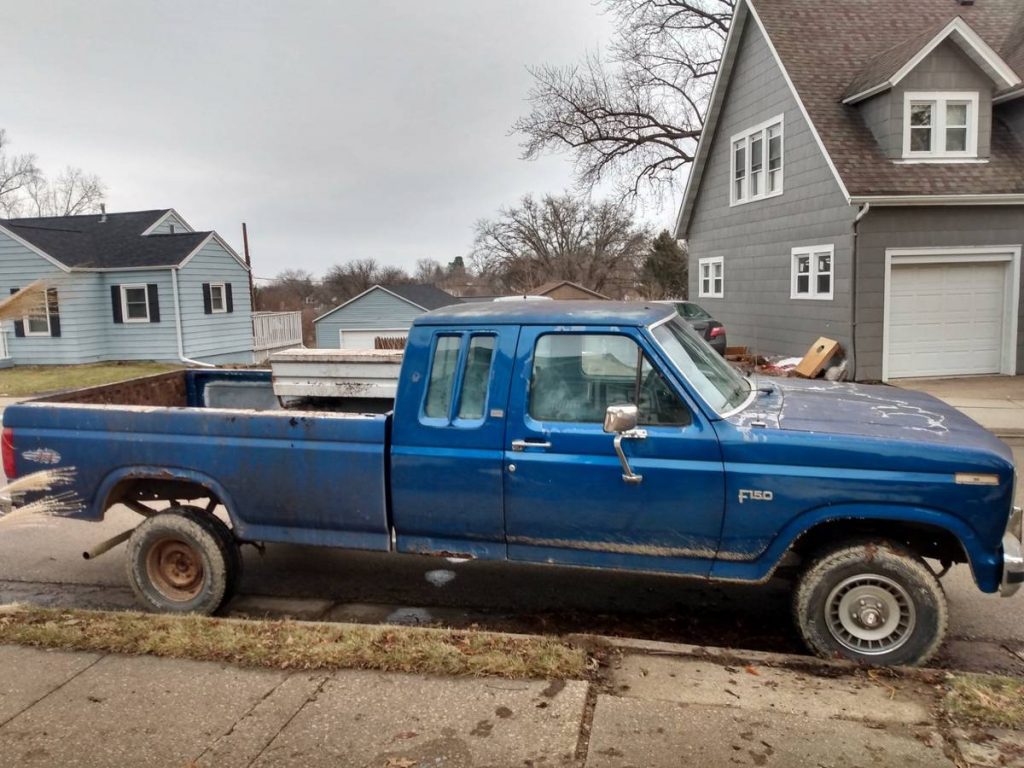 But still, it ain’t pretty. There’s a sort of grandeur to a well-worn truck like this, however, that’s as attractive and comforting as Midwestern home cooking. The bumps and bruises are like a scar or a broken nose in a kindly face: they tell a story, and it’s a hell of a tale, best told sitting at a bar. How much of that story is true? You decide.

Midwesterners are a frugal bunch, and it shows in the sky-high odometer readings of these two. Both of these trucks have put in lots of hours, but they still have some life in them. Which one is more your style?

Pacific Northwest-based self-taught DIYer of all the things. Current fleet: 1971 MGB GT, 1989 Chevy K1500, 2013 Chrysler 300C, 2003 Infiniti QX4, and 1966 Aristocrat Land Commander trailer. Not to mention about 40 RC cars and around 100 model kits...
Read All My Posts »
PrevPreviousHeeeyyyyyyy: Cold Start
NextNow That BMW iXs Are Driving Around: Do You Think It Looks Better Or Worse Than Initial Pictures?Next