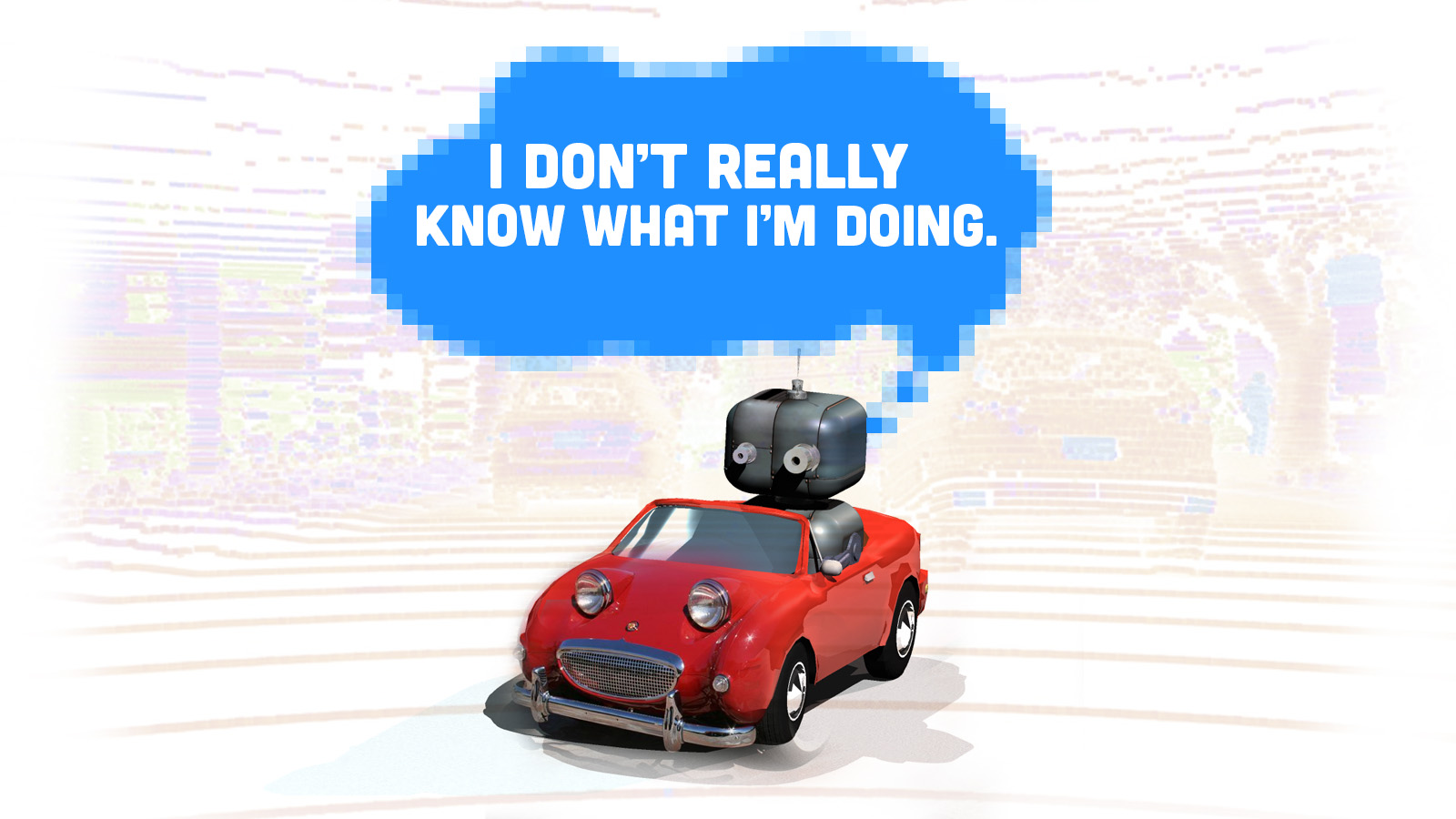 I’m not sure if you’ve been feeling it, but there’s something happening right now in the automated driving/autonomy/self-driving cars space, and it’s not a lot of fun, but it’s actually good news for consumers. It’s a bit of a hangover, really, a feeling that the party’s over and the house is a mess and the wet spot you’re laying just might be pee. Now, that analogy doesn’t sound good, but it’s the catalyst that’s needed to get your ass out of bed, change the sheets, get in the shower, and start taking care of shit. This is the current state of driving automation: finally coming to terms with the scale and difficulty of the task, and finally starting to think it through without the hype.

The mood in the AV space is slowly moving to the realization that, hey, full Level 5 autonomy is hard, really hard, and maybe, just maybe, it’s not a reasonable or even desirable destination to target. Apple, for example, just revealed that it’s dramatically scaling back their plans for their somehow still-upcoming car, plans that once included no steering wheel or pedals and provisions for sleep. And our pals over at Tesla seem to now be backtracking on their plan to use a camera-only system, called Tesla Vision, for their automated driving systems and are now looking to add radar back into the mix. Argo AI went out of business, at least in part because Ford realized Level 4 was going to take longer to achieve than originally thought. That last one is especially surprising because out of all these autonomous driving startups, Argo AI had its shit together much more than many others.

Everyone seems to be wising up. At least, I hope they are.

The Apple announcement is especially interesting, because, at least according to the Bloomberg report and via their anonymous source, we can see a pattern of thought that I think shows a realistic state of the current technology and also how many questions there are still left to be answered. I say this based on these quotes from the Bloomberg story:

“… Apple executives grappled with the reality that its vision for a fully autonomous vehicle – without a steering wheel or pedals – isn’t feasible with current technology.

…the company is now planning a less-ambitious design that will include a steering wheel and pedals and only support full autonomous capabilities on highways…Apple plans to develop a vehicle that lets drivers conduct other tasks – say, watch a movie or play a game – on a freeway and be alerted with ample time to switch over to manual control if they reach city streets or encounter inclement weather.”

These quotes are significant for a number of reasons: first, if Apple – a company I think we can all agree is generally extremely capable technically (who among us doesn’t use a Pippin or Newton on a daily basis?)  – says full autonomy is beyond our current abilities, then I think that carries some weight. But even more interesting are the next parts, where the anonymous Apple person states that the plan is for “full autonomous capabilities on highways,” so, a sort of Level 4 system, where the automation is restricted to certain areas and situations.

That’s fine, but then the quote goes on to describe how the driver can do other things, pay no attention to driving, u ntil they need to be “alerted with ample time” to take over, and cite conditions as common and capricious as weather as a possible reason why the driver would need to take over.

What this statement tells me is that Apple has a hell of a lot of work to do. Really, everyone in this space does, because so far I have yet to encounter a viable and plausible explanation from any AV maker regarding how a handoff from a completely disengaged driver to take over a car traveling at highway speeds would work.

Weather changes, like the quote from the Apple insider mentioned, can be sudden. What if the driver is asleep? Or drunk or wearing headphones not connected to the car’s audio system, or crying or laughing hysterically or moments away from orgasm or helping a child or pet or any number of things a human can be doing? How should the car handle a handoff where the driver doesn’t respond? And that’s just for planned handoffs, where the car knows it wants to pass control.

What about when the car miscalculates something, or a sensor fails or it encounters some bit of input that confuses it or the sun emerges from behind a tree to blind a camera or any number of other issues? Limiting the operating domain can help, but we’re still just talking about a normal highway here, at presumably highway speeds. Even if we abandon full Level 5 go-anywhere-do-anything autonomy as a pipe dream, there’s still so much more to figure out.

Now, I have no idea who this quote came from at Apple. I have no idea if it’s an engineer or an executive or the person who decided to not include a Micro SD slot on the iPhone. What I do know is that Apple’s new revised plans – from the little I can surmise from that quote – sound naïve.

Again, it’s not alone. Tesla potentially adding radar back to their suite of hardware after declaring that all they needed are cameras and that their cars were hardware-ready for full autonomy was also naïve, especially considering Tesla made the same claim in 2016 and had to upgrade hardware once already.

I hope all of these companies finally admitting that full, independent Level 5 autonomy may be out of reach for the near future will finally turn their attention to all of the other, non-technical problems that need solving, especially the issues of how to deal with uncooperative handoffs and failure management for when things inevitably go wrong. The whole industry needs to get over their idiotic pride and work together on the key problems of getting disabled AVs out of active traffic lanes and a common, expected procedure for dealing with a handoff that never happens.

This is the unsexy stuff, and it likely will require regulations and perhaps infrastructural changes and hardware, but there’s really no way around it if we want to find a non-magic Level 5 system to actually work in our reality.

Want special highways where you can comfortably and reliably peace out while your car drives? Then we’re going to have to get everyone to cooperate. And there’s hardly anything the American automotive landscape is worse at than standards and cooperation. We don’t even have a standard EV charger port, for fudge’s sake. (This is also why a country with more centralized control like China could very easily beat us to having semi-automated highway travel.)

I feel like some companies get it; I recently spoke with Volvo’s autonomy partner and was impressed with their approach (full interview coming soon) because it reverses the usual paradigm: it’s not pitched as a labor and attention-saving system, but a safety backup. Where most Level 2 semi-automated systems are designed so the driver monitors the car and is ready to take over, Volvo’s setup keeps the driver in control, with the computers watching, ready to take over if needed.

This feels like a more realistic and usable approach to maximizing the safety benefits with the current level of technology while avoiding the usual Level 2 vigilance problems.

Overall, I’m hopeful that these recent developments actually are signaling that we may finally be breaking out of the Unlimited Level 5 pipe dreams, the unwavering pursuit of which only impairs our ability to implement less comprehensive but still extremely useful systems that could enhance safety and give at least the most important automated driving benefits.

Remember, the best is the enemy of the good, even the good enough, especially if the best is some magical bullshit that’s probably not even worth banging our heads against the wall to achieve.

I'm a co-founder of the Autopian, the site you're on RIGHT NOW! I'm here to talk to you about taillights until you cry and beg me to stop, which I absolutely will not. Sorry. Hug? Also, David's friend.
Read All My Posts »
PrevPreviousThe Last Boeing 747 Has Been Built After An Incredible Production Run Of Over 54 Years
NextRivian’s Got A Bug Problem — And Not Just The Software KindNext