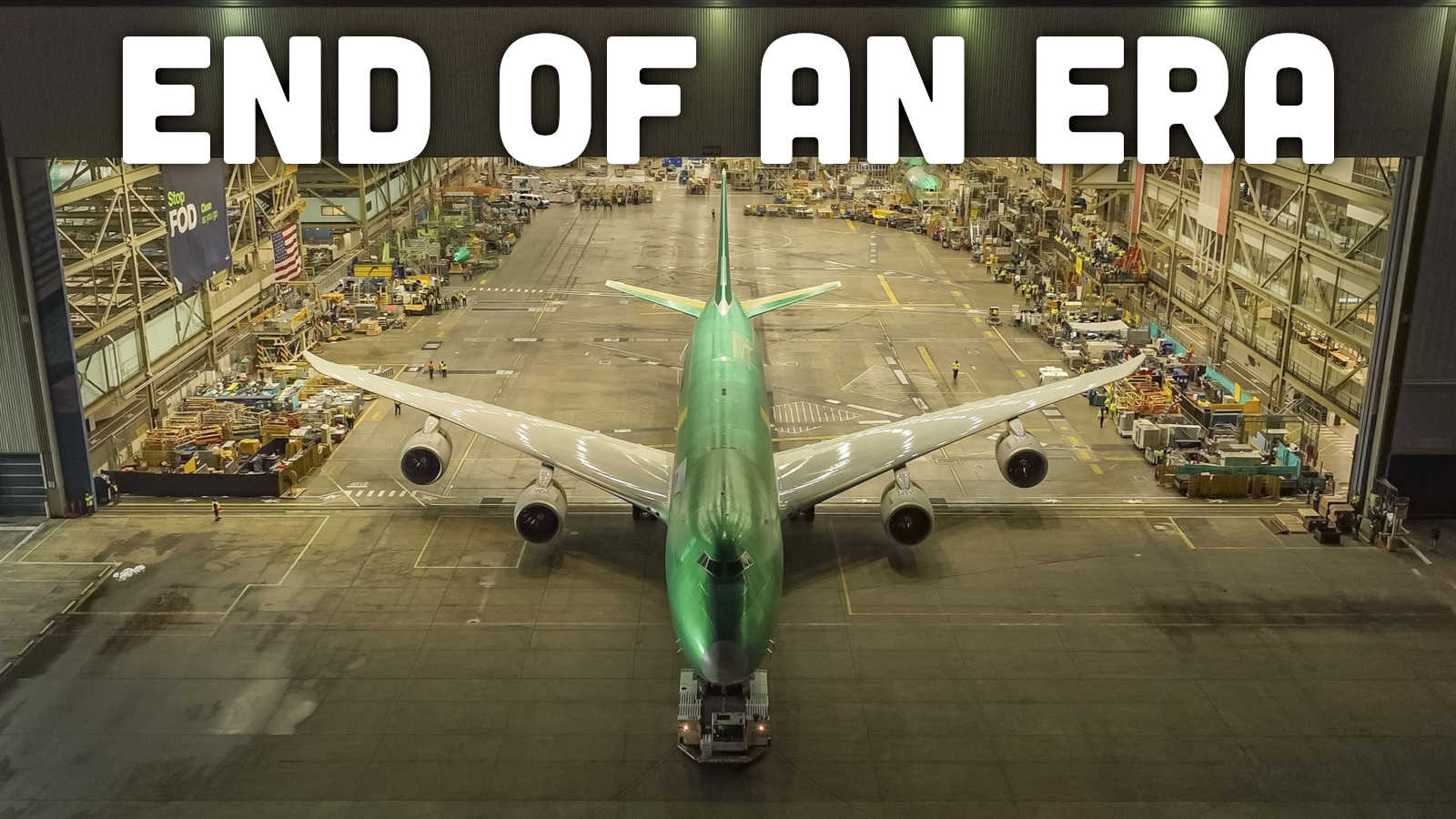 On Tuesday night, the very last Boeing 747 rolled out of the aircraft maker’s Everett, Washington factory. When the 1,574th Boeing 747 gets delivered to Atlas Air Worldwide Holdings early next year, it’ll mark the end of an era. The aircraft enjoyed a production run over half of a century-long, earning the nickname “the Queen of the Skies” and becoming synonymous with the term jumbo jet along the way. Let’s take one last look at the incredible story of a majestic plane.

Back in April, I wrote about how Boeing was cracking through its final five orders of its famed 747. The very last 747 that UPS will get rolled out of the paint shop. And the final aircraft in the order book were for Atlas Air. We’ve all known that this day would come, but it’s still a bit of a shock. The Everett plant, the world’s largest building by volume, will no longer build the aircraft that it was constructed for.

Kim Smith, Boeing Vice President and general manager for 747 and 767 Programs, released a statement on the occasion:

“For more than half a century, tens of thousands of dedicated Boeing employees have designed and built this magnificent airplane that has truly changed the world. We are proud that this plane will continue to fly across the globe for years to come.”

The story of the Queen of the Skies starts with the Boeing 707. First flown in 1957, the iconic 707 wasn’t the first commercial jet, but it was one of the most successful. The 707 helped reshape air travel in the early years of the Jet Age and it can be argued that without the 707’s success, there would be no 747. As Simple Flying notes, 707 launch customer Pan American World Airways worked closely with Boeing on the aircraft’s development.

When the 707’s success meant further expansion, Pan Am CEO Juan Trippe looked to capitalize on the explosive growth of air travel with an aircraft with double the capacity of the 707. The airline executive’s idea was that if Pan Am could fit more people on a plane, it could charge less per seat. And having one plane full of tons of people would reduce airport congestion. When Boeing itself looks back on the 747’s development, it mentioned the same ideas. We’d see this concept decades later–and arguably too late–with the super jumbo Airbus A380.

But Boeing? It was primed to change the world.

There is another event that happened that helped thrust the 747 into existence. In 1961, the United States Air Force began looking into a replacement for the Douglas C-133 Cargomaster. This proposed aircraft would also complement the Lockheed C-141 Starlifter. A number of aircraft manufacturers took on the challenge. In 1963, the military finalized what it was looking for in its Request for Proposal for a large military transport aircraft. The project was dubbed the Cargo Experimental-Heavy Logistics System, or CX-HLS.

For the CX-HLS, the military sought an aircraft with a fuselage large enough to carry its largest cranes, missiles, radars, and other equipment. The aircraft would have cargo doors in the front and rear to allow for quick loading and unloading. Fully loaded, the CX-HLS would weigh 600,000 pounds (around twice that of a 707), have the range to carry a 100,000-pound load 6,000 nautical miles, and have a rugged enough undercarriage to permit landing on rough fields.

That’s a huge wishlist, and Boeing, Douglas, General Dynamics, Lockheed, and Martin Marietta all had their bid for the best CX-HLS. Of those, the military pared the list down to Boeing, Douglas, and Lockheed. Due to those front-loading requirements, all three finalist designs placed the cockpit above the cargo area. Lockheed went with a spine that ran the length of the fuselage while Douglas and Boeing elected for cockpit pods.

Boeing eventually lost the bid for the CX-HLS, but it wasn’t going to let the aircraft’s development go to waste. The 747 is different from Boeing’s bid for the CX-HLS project, but some attributes made it over. The easiest carryover to spot is the hump for the cockpit and the upper deck. To meet the military’s requirements, High-bypass engine technology was in development for the CX-HLS. Those engines would make it over to the 747 in the form of four 43,000-pound-thrust Pratt & Whitney JT9D-3 turbofans.

Just like with the 707, Pan American’s Juan Trippe had some say in the 747’s development. Targeting those aforementioned lower fares, Trippe asked for the new aircraft to carry twice what a 707 could. As the U.S. Centennial of Flight Commission notes, an early design for the 747 blew right past Trippe’s goal. This mammoth design called for two full-length decks with passengers seated in two aisles. Carrying more than 400 passengers, the Commission notes that the design called for a seating capacity three times that of the largest 707. However, concerns about emergency evacuation times and cargo capacity meant the design would be scaled back.

Instead, Boeing widened the fuselage cross-section, allowing a single deck with twin aisles and ten abreast seating. Then, additional space would be found in the hump above that deck. The new design allowed a seating capacity of 366 in a three-class configuration but alleviated the need for two full decks.

Boeing agreed to deliver the first 747s to Pan American by the end of 1969. When that agreement was reached, the aircraft manufacturer had just 28 months to design and build the plane, from Boeing:

The 747 was the result of the work of some 50,000 Boeing people. Called “the Incredibles,” these were the construction workers, mechanics, engineers, secretaries, and administrators who made aviation history by building the 747 — the largest civilian airplane in the world — in roughly 16 months during the late 1960s.

Boeing marks the beginning of production as starting in 1967. The 747 took its first flight in 1969 before deliveries started to Pan American in January 1970, changing aviation history.

The 747 has enjoyed a long and distinguished career, earning the endearing nickname the Queen of the Skies. These aircraft have carried people all around the world in style and comfort. And true to its goals, cramming hundreds of people in 747s helped make flying cheaper. Boeing produced a wide array of 747s from the short 747SP to the 747-400 Dreamlifter, a modified 747-400 that carries 787 Dreamliner assemblies in its enlarged cargo hold.

The 747 wasn’t just a vehicle to change aviation either, as it was a rockstar of sorts all on its own. Watch a movie featuring a plane and chances are you’ll see a 747 or an imaginary aircraft inspired by the 747. Even wacky Soul Plane used a goofy CGI version of the plane with 84-inch spinners, hydraulics, and flown by Snoop Dogg.

The Boeing 747 changed aviation, but it was built for a world that is fading away. Jumbos like the 747 work best on a “hub and spoke” model. In this operational model, people fly from hub to hub on a large aircraft, then board something smaller to reach their final spoke destination. Airlines saw these large beasts reducing airport congestion while getting lots of people to one place at one time.

However, recent decades have seen a rise in point-to-point travel. Today’s twinjets are more capable than their predecessors and economical, too. This has allowed smaller planes to fly regional routes between points. Because of this, today you can board a plane at one small airport and fly to another small airport and you may not need to connect at a major hub.

And there’s more. Today’s twinjets can fly routes that were once reserved for trijets like the McDonnell Douglas DC-10 or quadjets like the 747. Simple Flying explains it short and sweet:

At the time the 747 was designed, twin engines were severely limited in operation and not permitted to fly more than 60 minutes away from a diversion airport. This made transoceanic flights the domain of the quadjet.

This has changed. ETOPS (Extended-range Twin-engine Operational Performance Standards) regulations were introduced in the 1980s and recognized the improved performance and reliability of twin-engine aircraft. The first rating given to the 767 permitted operations up to 120 minutes from a diversion airport. This has increased today, with ratings of up to 350 minutes for the Airbus A350.

These hits have made giants like the 747 and A380 better fit for the handful of routes with enough demand to fill hundreds of seats on a single flight. That means like the A380, the number of 747s in operation is dwindling. The type’s largest customer, Japan Airlines, retired its last aircraft in 2011. And just like with the A380, the pandemic’s decline in air travel accelerated the retirement of 747s. But a few airlines are holding out, and you can still catch a ride in a 747-8 with Air China, Korean Air, and Lufthansa. Air China, Air India, Asiana, Rossiya, and Thai Airways are still flying older 747-400s.

Celebrating the end of production, Boeing has released some fun facts about the 747. Over 54 years of production (going by Boeing’s date of 1967) the aircraft maker cranked out 1,574 examples. Over that time, the 247-foot-long Airbus A340-600 took the crown as the longest commercial aircraft in the world. Boeing unseated Airbus with the 250-foot 747-8, which the manufacturer says at cruising speed covers the length of about three football fields a second. And the very last 747, a 747-8 Freighter, can carry 133.1 tonnes, or about 10,699 gold bars or 19 million ping-pong balls. I love those silly stats.

With production over for these famous aircraft, the time left to catch a ride in one is finite. It’s hard to say when, but eventually, passenger versions of the 747 will go the way of other historic commercial jets. Then, the final holdouts of these majestic planes will be freighters, which could be flying a couple of decades into the future. Hopefully, I can find myself aboard a passenger 747 (and maybe in a cockpit) before all is said and done.

Mercedes is a lifelong fan of all things powered by an engine. When she isn't driving one of her five Smart Fortwos or her 14 other vehicles she could be found in the cockpit of a Cessna 172 or perhaps swimming in any body of water that she could find. She also has a deep love for buses of all kinds. Please send her buses. mercedes@theautopian.com Instagram: @mistymotors Twitter: @Miss_Mercedes30 Facebook.com/neonspinnazz
Read All My Posts »
PrevPreviousAnnouncement: We’re Making Site Upgrades
NextWe’re Entering The Wising-Up Phase Of Self-Driving Cars And It’s About Damn TimeNext