When A Story Could Easily Be About A Company Or One Crazy Person: Comment Of The Day 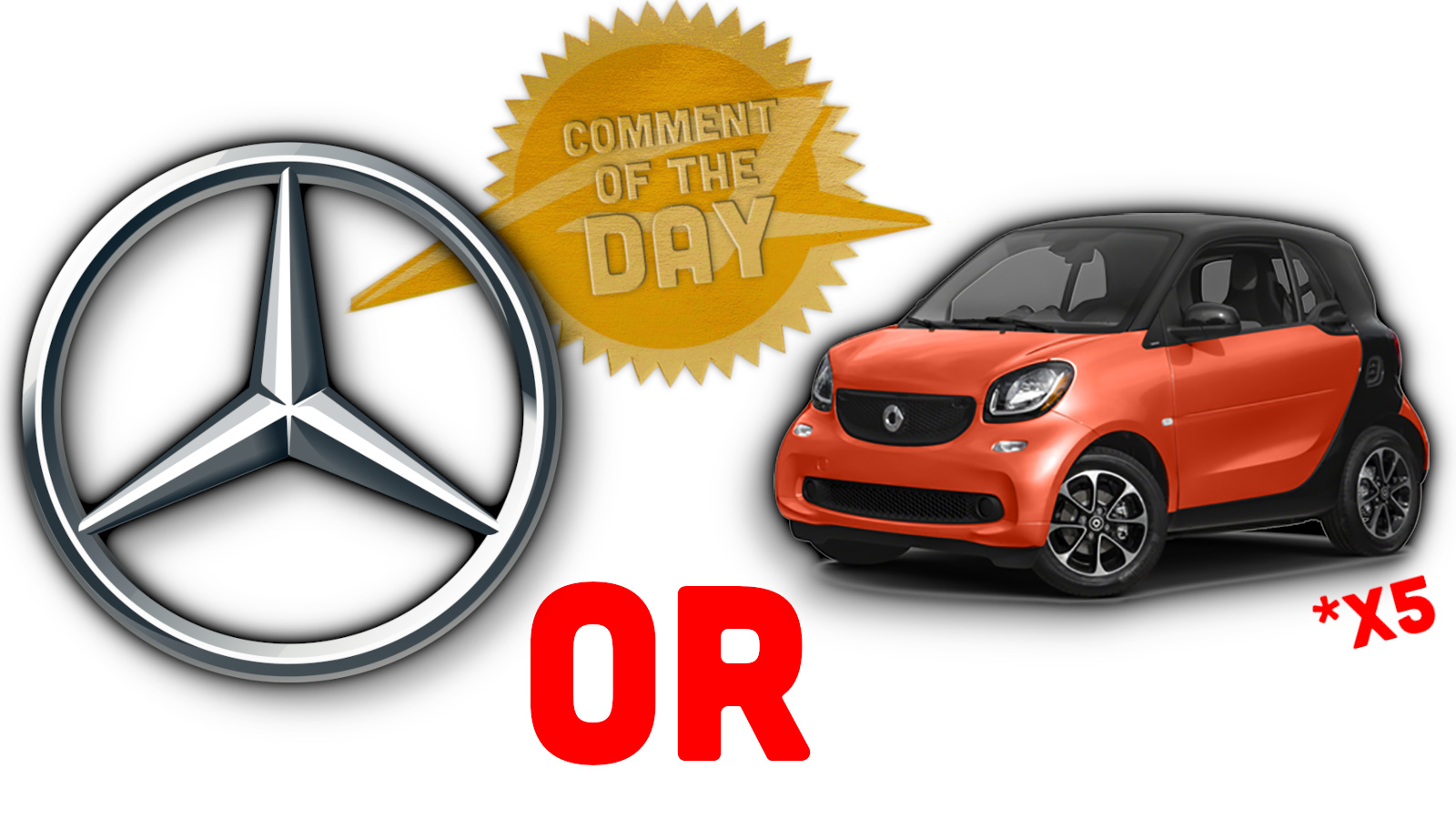 Mercedes has been in the news for the past couple of days. Mercedes has recalled 447,659 cars, some of them over 20 years old. And today, Mercedes reportedly wants to challenge Tesla’s supercharger network. Sure, we could be talking about Mercedes-Benz the automaker, but for all you know, my brain is sitting on a pile of hundreds of thousands of cars to recall for you.

A common question that I get is if my name is actually Mercedes Streeter, or if I’m writing under a nom de plume. My legal first name really is Mercedes and my last name used to be Streeter. I changed my last name sometime over the past two years to honor my grandfather. But, “Streeter” is sort of perfect for this job, so I kept it for writing.

When I started writing about cars for work, something funny happened. I started looking at headlines with “Mercedes” in them differently. Of course, the subject would be about the automaker, but I’d think about the subject “Mercedes” being a person and I would have a sensible chuckle. At the old lighting site, there were plenty of headlines like this, and sometimes my co-workers would even joke about headlines that sound like I’m doing something. I remember jokingly apologizing for killing wagons after this was published: 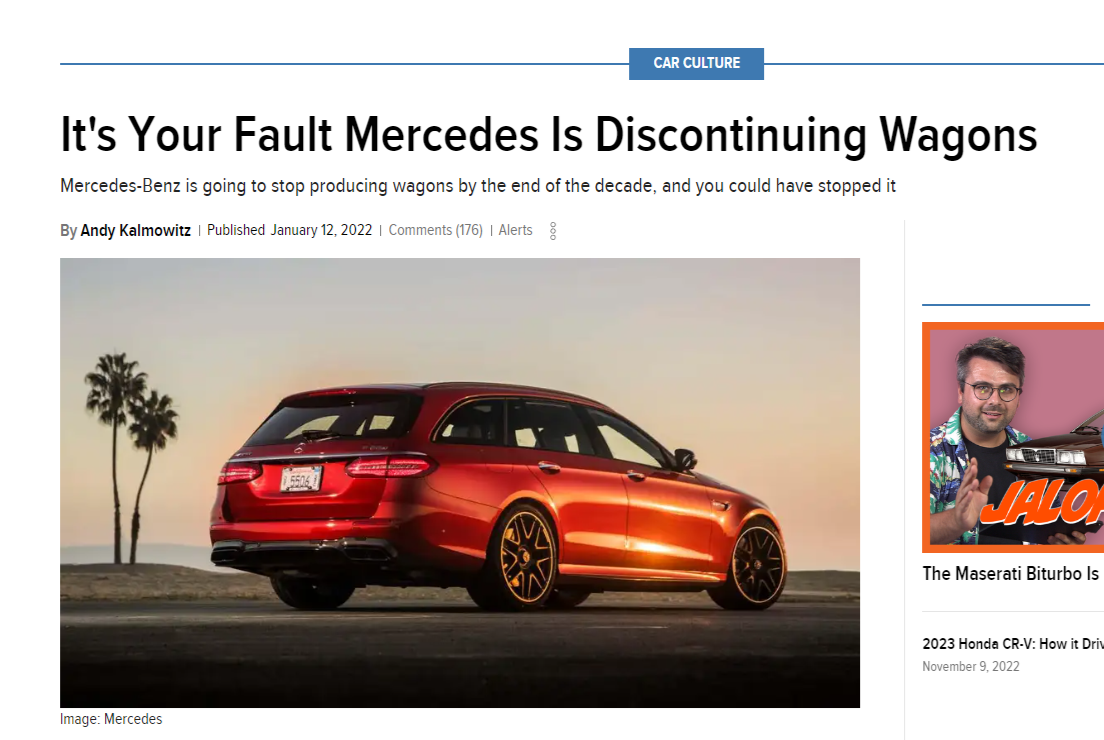 And now, the joke has spread over to the Autopian. Yesterday, Matt published a Morning Dump with the headline: Mercedes Is Recalling 447,659 Vehicles And Some Are Over 20 Years Old

TenuredLurker brought it up first, saying:

Not gonna lie, I read the title and thought “Ooh, Mercedes is writing a long one.” Got my hopes up for the wrong Mercedes.

Drew followed it up with this banger, which had me giggling:

“Mercedes Streeter fondly recalls hundreds of thousands of vehicles. Mostly buses and Smarts.” I’d read that article. The “some over 20 years old” is a given, though.

Drew did it again, commenting:

“Mercedes To Challenge Tesla’s Supercharger Network”
Without reading any of the article, I would like this to just be Mercedes Streeter fitting buses with EV chargers and creating her own mobile charging network. Or simply challenging the supercharger network to a duel. She’ll win, since she has the advantages of both mobility and reason.

And total hilarity ensued in the comments, including this one from mrcanoehead:

There needs to be an editorial rule here that things either say “Mercedes” or “Mercedes-Benz”. Every time one of these headlines pops up, I think that Mercedes Streeter sure is one busy writer.

Drew wins COTD today with an honorable mention for TenuredLurker for these fantastic quips. Now that my face is red from laughing so much, I will explain why the heck I’m even named Mercedes in the first place. I wasn’t born with the name Mercedes, but I chose the name for myself almost 11 years ago, and perhaps for a silly reason.

As some of you know, I am transgender. Back in 2012, I was still finding myself and experimenting with my appearance and a bit with my identity. That year, I sold my first car–a 2001 Kia Rio–to CarMax.

Replacing it was my teenage dream car, a Smart Fortwo.

I still have this car today, but it needs some restoration work. This car meant the world to me, as it was physical proof that if I worked hard enough and if I believed in myself, my dreams don’t have to be limited to desktop wallpapers and posters. This car to me is like a lifelong friend; it has always been there for me, even when I haven’t been there for it. Even as I own 21-ish vehicles today, this car sits right near the top of my list.

When the car was still nice and fresh in 2021, it was basically my home base of operations as I continued with my experimenting. I got the car 5 percent window tints so that I could change clothes more or less in private. And I got the optional cargo blind so that I could hide my clothes out of sight. One day, I realized that there’s a chance that I’d just become my “new self.” So, I thought that I should come up with a name. I decided to choose the first name that came to my mind. Then I looked down, saw the Smart badge, and boom, “Mercedes” popped into my mind. As you could guess, I committed to it.

So, yep, I named myself after a car company. And it’s not like I’m the biggest fan of the brand’s cars, just its tiny subsidiary that makes tiny phonebooths dressed up as cars.

Mercedes is a lifelong fan of all things powered by an engine. When she isn't driving one of her five Smart Fortwos or her 14 other vehicles she could be found in the cockpit of a Cessna 172 or perhaps swimming in any body of water that she could find. She also has a deep love for buses of all kinds. Please send her buses. mercedes@theautopian.com Instagram: @mistymotors Twitter: @Miss_Mercedes30 Facebook.com/neonspinnazz
Read All My Posts »
PrevPreviousSee If You Can Figure Out What This Engine Block At A Disneyland Star Wars Ride Was From
NextWho The Hell Parked Here?: Cold StartNext