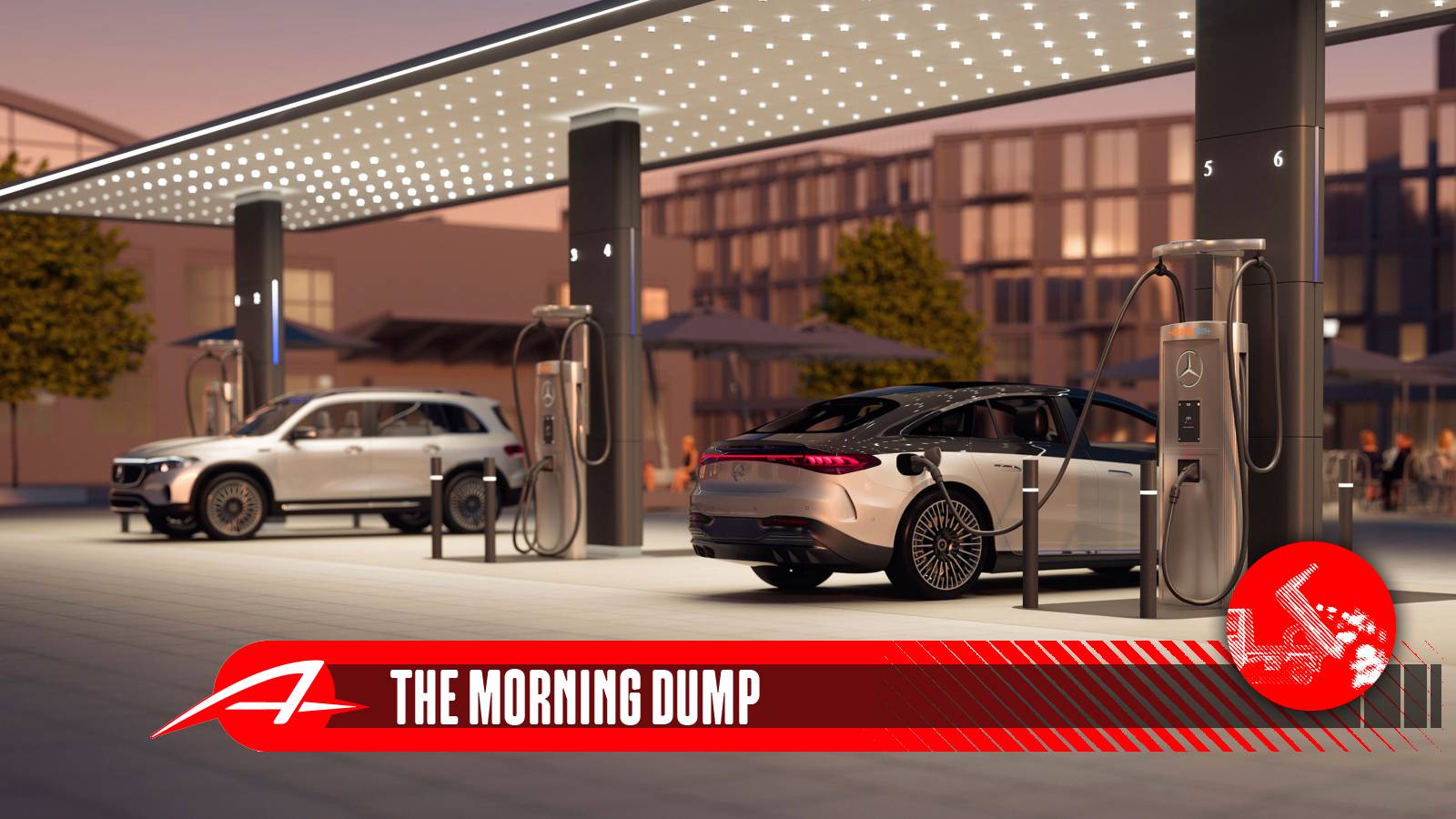 Hello, fellow Autopians! Your hardworking (I mean, kinda) Editor-at-Large here, back from CES, where I didn’t even get COVID-19 again. I think. So far, so good. I was unexpectedly named CEO of a blockchain-powered flying car startup, so that’s fun. We’ve already been accused of wire fraud and “could all be indicted within weeks,” according to the lawyers, but I told the workforce that as long as we commit to an “extremely hardcore” work ethic, we should still be able to nail our IPO even from prison. It’s been a busy two days for me!

Anyway, onto the car news for Friday’s Morning Dump: We’re talking about Mercedes-Benz’s new EV charging network, BYD’s new luxury brand, and Tesla’s new discount offers in China. Let’s get this knocked out before the FBI shows up at my house with a warrant.

Mercedes Puts Its Money Where Its Mouth Is

Say what you will about Tesla, but I believe there are a few things that company has done extraordinarily right over the years. Near the top of the list is building out its own Supercharger network. With its ubiquity across the country and incredible ease of use, nothing has done more than that to spur widespread EV adoption and ease range anxiety. So what if it’s only for Tesla users (although that’s changing soon)? That’s capitalism, my darlings. It was a smart move that proved the EV case writ large and got tons of Tesla cars on the road. We need more OEMs to step up in the same way.

Now, one of Tesla’s direct competitors, Mercedes-Benz, is doing exactly that. At CES yesterday, the German automaker—in the middle of a big EV pivot of its own—announced it will build its own network of high-speed public EV chargers. Here’s what the automaker had to say:

The North American network is scheduled for completion by 2027, by which time a total of more than 400 hubs with more than 2,500 high-power chargers will cover the continent. Spaced conveniently at regular intervals close to motorways, major intersections and metropolitan areas, the hubs will offer a premium, sustainable and reliable charging experience.

[…] Depending on region and location, the hubs offer four to 12 – and ultimately as many as 30 – high-power chargers (HPC) with up to 350 kW charging power. Intelligent charge-load management allows each vehicle to charge at its maximum capacity, keeping waiting times to an absolute minimum.

But is it only for cars from the Silver Arrow brand? Not so; but here’s a good compromise: “The network will be open to all electric vehicle brands, but Mercedes-Benz customers will enjoy special benefits, such as the ability to reserve a charging spot.”

I think that’s a smart approach. It hopefully helps to spur wider EV adoption, opens a whole new business line for Mercedes, and takes care of the existing customers. The goal is to have more than 10,000 high-power chargers set up across North America, China and Europe by the end of this decade. Some will have solar-powered lights and security features as well.

One potential downside is that at least in North America, Mercedes is partnering with ChargePoint “on other technical aspects of the hubs and chargers.” I don’t know if you know this, but ChargePoint typically sucks. It makes most of its money selling maintenance contracts, not selling electrons, so its quality can vary wildly depending on whether that site owner is paying up or not.

Generally, the EV charging experience can be ranked thusly:

The ChargePoint station closest to my house in upstate New York is usually buried behind a 10-foot combined pile of snow and street garbage. One hopes that an actual, classy company like Mercedes will make sure this third-rate crap doesn’t happen under their own flag. [Ed note: The four ChargePoint stations at the actual Mercedes dealership down the street from me have never worked and are usually blocked by gasoline cars, so… – MH]

Of all the Chinese car brands you maybe haven’t given much thought to, BYD probably deserves more of your attention [Ed note: I keep trying! -MH]. If—and this is a huge if—you count plug-in hybrids, BYD is the biggest manufacturer of electric vehicles on the planet. Bigger than Tesla. If you count PHEVs, which it does. Either way, it’s a big deal. It’s backed by Warren Buffett and it has designs for the rest of the world soon.

How do you know it’s a real company? Because BYD’s already doing the Lexus thing and announcing its own premium luxury brand, which will be all-electrified. It’s called Yangwang, and it debuted this week with an electric supercar and a hybrid off-road SUV you see above. That looks a LOT like a Land Rover Defender, but it does moonwalk:

More on that later today. For now, here’s the Nikkei Asia on BYD’s Yangwang:

“The Yangwang brand will take the lead within our group in applying advanced technology. We will provide our customers with the highest degree of safety, performance and experience,” said BYD Chairman Wang Chuanfu at the event.

The U8 features technology that can control each of the four wheels separately with independent motors to enhance stability and safety.

No official price or release date was announced. The company had previously said that Yangwang models would be priced at 800,000 yuan to 1.5 million yuan ($116,000 to $217,000) and would be released sometime this year. Showrooms for the luxury vehicles will be set up in six major Chinese cities, including Beijing and Shanghai.

I’ll spare you the conversion math and let you know that’s a lot more expensive than BYD’s normal offerings, which normally fall in the 100,000 yuan to 200,000 yuan range, according to that story.

Will BYD come to North America? Last year when I was talking to them, that answer was a resounding yes. But with recent changes to how EVs get sold under the Biden Administration’s Inflation Reduction act, BYD seems to be backing off U.S. sales a bit. It still plans to build a battery plant here in America, so that could be seen as a first step. Either way, when you consider the global auto industry, this one’s a serious player now.

As an example, BYD and other Chinese homegrown EV brands are starting to eat Tesla’s lunch in China. COVID-related lockdowns and production stops are hurting the whole industry there, but like in America, Tesla now faces a raft of competition.

Amid this dipping demand, Tesla is now slashing Model Y and Model 3 prices in China (for the second time in less than three months there) as well as Japan, South Korea and Australia. This comes to us from Reuters:

Normally, price slashes aren’t what premium, in-demand automakers have to do, but Tesla’s had to resort to this across the board. In the U.S., it cut prices on those two cars by $7,500 at the end of 2022, and now many of its models qualify for the EV tax credit again, so hopefully, that should help.

I’ve written about this elsewhere, but my view is that 2023 will be the first real test of Tesla’s ability to stay a leader in a market it effectively created. It is not to be underestimated; it’s too big and too powerful to go down easily like the doomsayers claimed it would for years.

But the situation reminds me of the Burly Brawl in The Matrix Reloaded, where maybe Elon is Neo (which is absolutely how he thinks of himself now) and the dozens of Agent Smith copies are Hyundai, General Motors, Mercedes-Benz, Kia, BYD and so on.

I should rewatch that one. It’s not as good as the first, but I remember liking it as a kid.

The EV Race: Who Ya Got?

Who comes out on top in the EV arms race this year? How about five years? Ten years?

Here’s What You Need To Know About Tom Zhu, Tesla’s New ‘Number 2’

Mercedes Is Recalling 447,659 Vehicles And Some Are Over 20 Years Old

Editor-at-Large at The Autopian.
Read All My Posts »
PrevPreviousGen X Midlife Crisis Cars: 1985 Jeep CJ-7 vs 1987 VW Scirocco
NextPowering A BMW Motorcycle With An Air-Cooled Volkswagen Engine Is A Thing And It’s AmazingNext