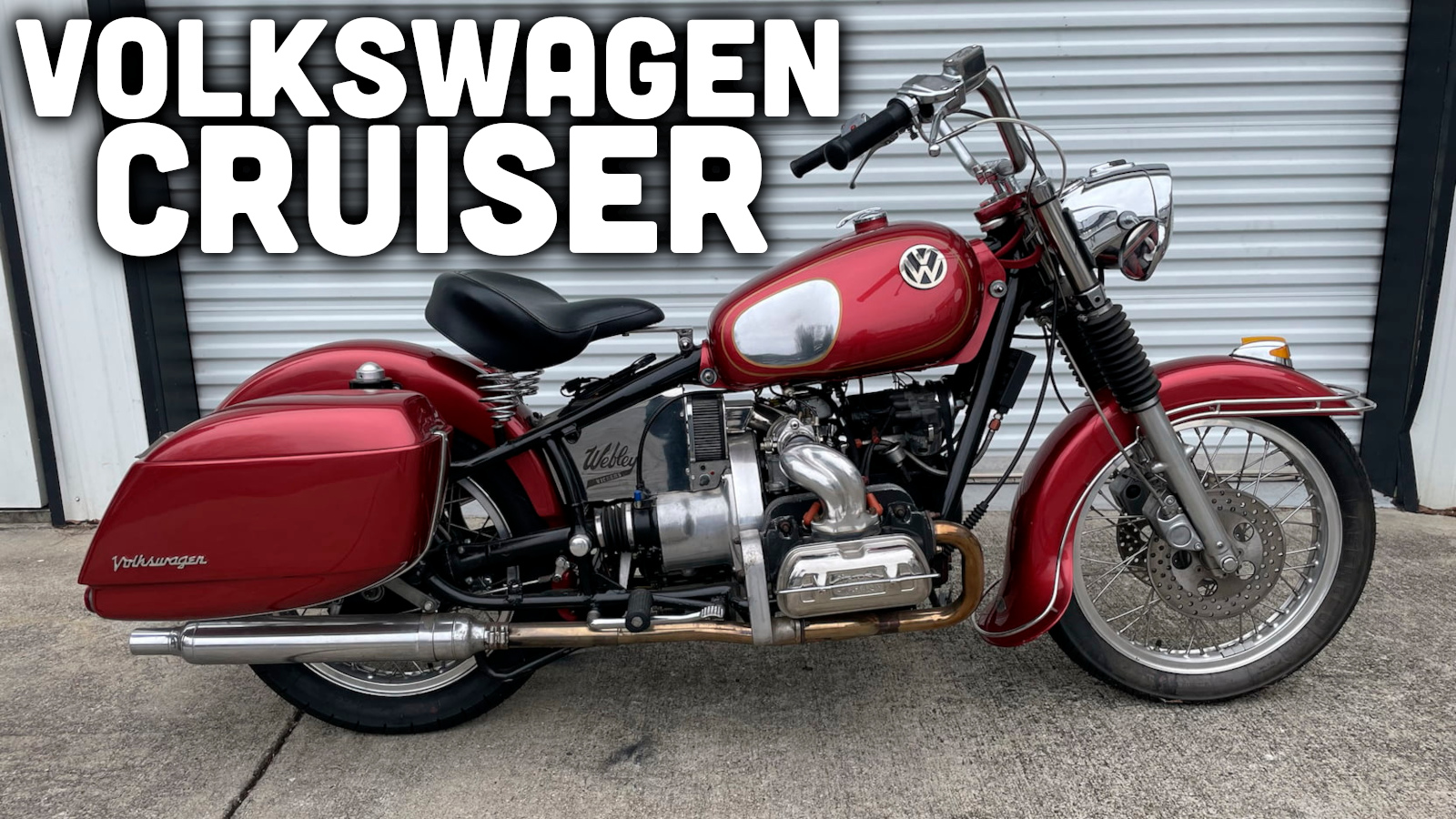 As our readers know, I spend way too much time looking at listings for vehicles that I wish I could own. In the winter, I especially love looking at classic motorcycles while my Triumph Tiger freezes outside. Great news! I’ve found a motorcycle that seems to do so much right. This 1953 Webley-Vickers combines the frame and transmission of a BMW with a 2000cc Volkswagen boxer, resulting in a beautiful machine that was its builder’s joy for five decades, and even served as a platform to help others make Volkswagen-powered BMWs.

This motorcycle has popped up at Mecum Auctions and it’s set to roll across the Las Vegas auction block on January 26. At first, I fell deeply in love with this creation because it’s about everything that I’d want in a vintage cruiser. It’s painted in a gorgeous color, is draped in plenty of brightwork, and even has some practical cases. That’s just the beginning of it, as the frame comes from a BMW while housed under the tank is a 2000cc air-cooled Volkswagen engine. It looks like a Harley-Davidson but could be repaired with zip ties and a hammer.

According to the listing, this is the work of California resident Doug Whitson. A motorcycle fanatic, Whitson purchased the tooling and parts from a developer of Volkswagen-powered motorcycles named Rodger Willis. Whitson took what he purchased and opened a business centered around selling Volkswagen-powered motorcycles and kits to convert motorcycles to VW power. His own motorcycle–the one on sale here–was built in the 1970s and was named the Webley-Vickers. When Whitson titled the custom creation, he decided to give it a model year matching his birth year, 1953. Listen to this thing purr:

I had so many questions, the first being “why?” Why does someone swap a BMW boxer for a VW boxer? And what’s the history of Whitson’s venture? I have spent several hours combing through the internet and encountering dead end after dead end. It’s not often that I find nothing tangible about a company, but here we are. It seems that older motorcycle enthusiasts know what these are, but no major site has detailed them before. The Mecum listing says to visit the “VBMW Motorcycles” Facebook page for more information, but such a page does not exist. It’s sort of amazing how little is out there.

Through further drilling, I did land on the page that the Mecum listing appears to be suggesting, and it’s called “VW Motercycles.” On the page is a nearly eight-year-old article detailing why people swap BMW engines for Volkswagen engines, and Whitson’s involvement in it. Back then, Whitson himself commented to say that the story does an amazing job documenting the era, and the article sources builders from the day. Most recently in 2020, Whitson was praised by V8 motorcycle builder Boss Hoss for taking one of the company’s chunky bikes 3,000 miles down highwayPeeeeeeeees in Alaska.

VW Motercycles, a page run by a builder of VW-converted motorcycles for fans of conversions, presents this as an explanation for why you might want to power a motorcycle with a Volkswagen engine:

There are a few good reasons why one would attempt to build and own a VW-powered motorcycle. For the builder, a unique challenge to build something different with all the “fun” of overcoming the various barriers that come with a project like this. From sourcing the components, designing the bike, figuring out the mechanical solutions and putting it all together. The thrill of the first time it starts and runs down the street is a memorable event. Owning one and driving it is very enjoyable due to the fact again, it is a very unique bike that arouses all kinds of interest and questions from those who see it.

The beauty of the VW-powered motorcycle is the fact that the VW engine is a very reliable, very powerful low revving engine with a lot of torque. Parts are cheap, it is low tech and so easy to maintain. Unlike a bike today that cost a fortune to service (forget about fixing some electrical problem on the road), it never breaks! It is incredibly smooth, idles flawlessly and when you grab the throttle at highway speeds, accelerates like it is being drawn down the road by a tremendous magnetic field!

Searching through various motorcyclist forums, it seems that one motivation to put a Volkswagen engine in a motorcycle is similar to why the Brazilian AME Amazonas 1600 exists. A Volkswagen Beetle engine was cheap and crazy reliable when a Harley-Davidson engine of the era might have broken down on you. Our Jason Torchinsky wrote about the Brazilian bike before and explains that the country may have also been motivated to build VW-powered motorcycles due to the lack of large motorcycles for police use. 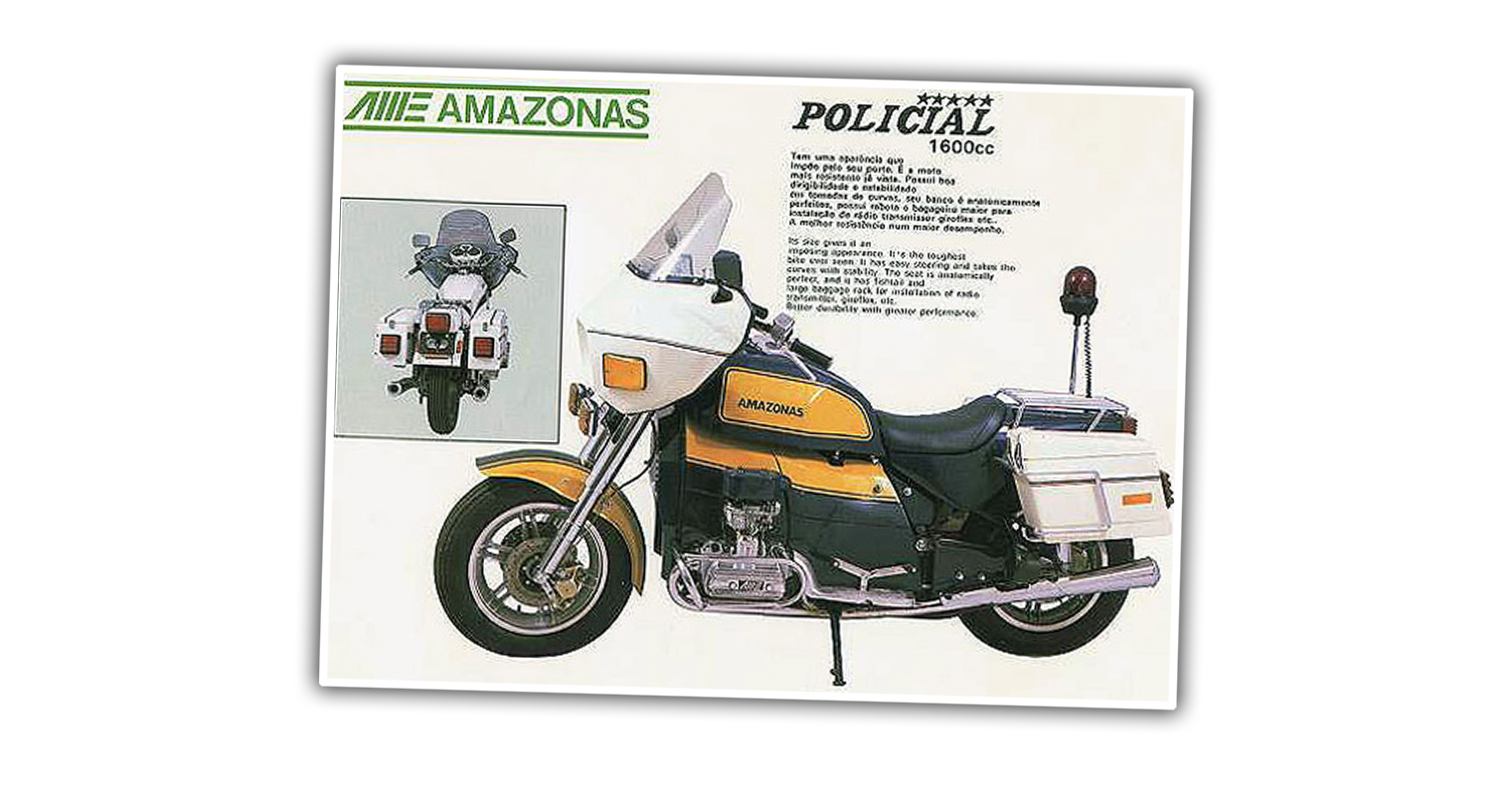 Back to America, VW Motercycles says that the vast majority of Volkswagen-powered motorcycles started their lives as BMWs, often R60/2s from 1960 to 1969. More searching reveals anecdotes from motorcyclists claiming that they’ve seen or worked VW-converted BMWs in the 1960s and 1970s. VW Motercycles goes on to note that BMW was a popular choice because the motorcycle manufacturer already used boxer engines, making a Beetle’s engine a natural fit, and an aesthetically-pleasing one at that. The page writes that other companies that used horizontally-opposed engines like Ural and Dnepr also gave up their frames to Volkswagen engines. Of course, since we’re talking about a custom motorcycle here, really any motorcycle could give its frame up to fit a Beetle engine.

Listen to a Ural converted with a VW engine:

The creator of the Facebook page then gives an overview on how to build a Volkswagen-powered BMW, explaining that the BMW’s frame needs to be cut in half and then lengthened or widened to house the VW powerplant. Then to mount the engine, custom motor mounts need to be welded in.

VW Motercycles explains that the next step is to connect the Beetle engine to the existing BMW transmission, and that is done through a custom bellhousing. Doug Whitson is credited for designing a bellhousing that not only does the job, but allows you to install an electric starter. That way, you aren’t left trying to kick a VW engine into life using a BMW kick starter.

The page notes that you still won’t be done yet, as the original BMW clutch needs to be modified so that it doesn’t slip under VW power, and the transmission itself needs to be regeared. As the page explains, using the original gearing would result in a low top speed as the transmission was made for the higher-revving BMW engine. The regearing caused fitment issues, so then you needed to relocate the input shaft, which required welding and machining. From there, apparently, things get easier as you mount on a generator, a carburetor, and an exhaust.

Apparently, a number of people in the 1960s were involved in cranking out VW conversion parts and kits. One of those people was Rodger Willis, who is said to have originally worked with Jack’s BMW to build complete converted motorcycles and kits. Eventually, because of an alleged dispute, Willis ended up with the tooling and the rights. Willis then continued making those motorcycles and kits before passing them on to Whitson, who continued to do the same until about 2018. Whitson’s parts included the aforementioned transmission regearing process, but he improved it with computer-aided design and manufacturing software. Whitson also supplied an aluminum billet bellhousing with an electric starter, exhaust manifolds, a generator mount, a clutch button, an oil-filled intake manifold to keep the carb from icing, and more.

[Editor’s note: That’s a real VW taillight there! What a nice touch. It seems to be doing duty as a license plate lamp, too, making me wonder if it’s possibly a cut-down 1954-1955 Heart Taillight with the heart lens area repurposed to be the license plate light opening? – JT]

The page says that Whitson and Willis were hardly the only players, as a number of others got involved in making these motorcycles. It’s sort of wild that there’s not much written anywhere about this, and the only source is one written by another enthusiast and builder of VW-converted motorcycles.

Whitson’s Webley-Vickers is a testament to how good these conversions can be. According to the Mecum listing, Whitson rode it from California to Sturgis, South Dakota many times. Housed where the BMW mill would normally be is a 2000cc Volkswagen engine. It’s making an unspecified amount of power and is fed from dual S&S carburetors. The listing reports that the other conversion parts include the parts that Whitson sold for kits like the intake and exhaust manifolds. Apparently, Whitson enjoyed this motorcycle from the 1970s all the way until 2018, when he sold it to a dealership. The odometer shows 24,668 miles, but it’s unclear how many of those were pre-conversion. Sadly, engine output and which BMW gave up its frame for this isn’t known.

What is for sure is that this is a wild one-off from a time when at least some motorcycle enthusiasts saw air-cooled VW engines as viable power for motorcycles, and this is a gorgeous example. It’s set to roll across the auction block on January 26. I’ve reached out to Doug Whitson to see if he could give me any more information. If you know anything about this period of Volkswagen-powered motorcycles, drop me a line at mercedes@theautopian.com. I’d love to know more about this niche!

Mercedes is a lifelong fan of all things powered by an engine. When she isn't driving one of her five Smart Fortwos or her 14 other vehicles she could be found in the cockpit of a Cessna 172 or perhaps swimming in any body of water that she could find. She also has a deep love for buses of all kinds. Please send her buses. mercedes@theautopian.com Instagram: @mistymotors Twitter: @Miss_Mercedes30 Facebook.com/neonspinnazz
Read All My Posts »
PrevPreviousMercedes To Challenge Tesla’s Supercharger Network
NextBYD Created An Electric Car That Can Freaking MoonwalkNext