Are you a gearhead? Do you enjoy motorcycle history and turning dead dinosaurs into adrenaline and noise? If the answer to either of these is “yes,” then the Ace Cafe in London has an annual fall event for you. It’s a place for motorcycle lovers, old car fans, and anyone who has even an ounce of petrol running through their veins. The Cafe has a fascinating backstory that goes back to a time before World War II and every year in September, it hosts a reunion to celebrate all things bikes, leather jackets, and ’50s cool. Here’s what it’s like.

But before we talk about all of that, it’s time for a short sociology lesson. As we humans grow up and develop into adults, we tend to gravitate to other kids who share our common interests and backgrounds. We also tend to do stupid stuff that gets us into trouble. My formative years were no different, and in my High School in 1970’s New Jersey, we had the jocks, the nerds, the music and drama types, and the greasers. Things were no different in 1950s and ’60s England either, and two of the more famous groups that came out of that time were the Mods and the Rockers.

The Mods And Rockers

The Mods were kids who were into music and fashion, dressed in suits, and rode on scooters decorated with lots of chrome and as many mirrors and lights as they could find space for.

(If you’ve ever seen the movie Quadrophenia by The Who, you know what I’m talking about. If you’ve never seen it, then stop right now and go watch it. The story is about Jimmy, a Mod, and the life he and his Mod friends lead taking amphetamines, partying, riding scooters and getting into fights with the local Rockers. It culminates in a huge brawl in the seaside town of Brighton. It’s a great movie and the music is amazing. A young Sting even makes an appearance playing a character all the Mods look up to. I won’t say more than that, so go and watch the movie.)

The Rockers, on the other hand, were like the “greasers” in my school with slicked-back hair, leather jackets, leather boots, and motorcycles. Motorcycles were the favored mode of getting around back then because they were cheap and in post-war England, there wasn’t a lot of money to spend on non-essential things. The prosperity that we in the U.S. enjoyed during the ’50s escaped the Brits because as a country they had to spend every extra penny on rebuilding the stuff that got bombed into oblivion during World War II. This meant no fancy cars or luxuries except for the very fortunate few. [Editor’s Note: It also meant amazing microcars. -DT]

Motorcycles Were Huge In Post-War Britain

Bikes were the transport of choice then for the younger crowd. Motorcycle clubs started to form, and fights did at times break out between the different clubs and between the Mods and Rockers. The most famous one occurred in the south English town of Brighton where a small group of Rockers was attacked and assaulted by a much larger group of Mods. Fights had also happened in other towns and the result was the media labeling both groups as “internal enemies” of the U.K., “vermin” and “louts” and basically blowing the whole thing way out of proportion. The reality was much more mundane and both groups really just wanted to be left alone and be allowed to assert their individuality, as teenagers do.

One of the most famous of the clubs that was formed around this time was the 59 Club. Founded in 1959 by the Rev. John Oates in the east end of London which was a very depressed and underprivileged area at that time, the club was established to give young people a safe place to gather, meet, and listen to music. In fact, Rev Oates convinced Cliff Richards, the equivalent of Elvis in the UK, to perform at the inaugural night. It was a big deal and the club quickly grew. It wasn’t specifically a motorcycle club at first, but in 1962, Rev William Shergold, a rider himself, added a motorcycle section to the club. He followed this by instituting a “Blessing of the Bikes” at the church. Throughout the years, the 59 Club grew and is still active today and the blessing of the bikes still happens every year during the reunion. This year the ride to the church was on Saturday, Sept. 3, with several hundred riders taking part.

Like teenagers did then and still do now, both the Mods and the Rockers also found places where they could hang out and meet like-minded kids outside of the club scene. One of the places some Rockers liked to hang out was the Ace Cafe in the northwest of London. The Ace Cafe was opened in 1938 and was basically a truck stop, or transport cafe, catering to trucks and other travelers traveling to or from London. It soon started attracting motorcyclists and this naturally included the local Rockers crowd. After being badly damaged during World War II, the cafe reopened in 1949 and had its heyday during the ’50s and ’60s.

Over the years, many legends grew up around the Cafe but one that seems to have staying power is the story that the cafe would put a record on the record player and while the song played, bikers would ride up the road to the next round-about and return before the record ended. It wasn’t a particularly short distance and in order to get back in time, riders would have to exceed 100 mph. Those that did it became known as the Ton Up club. This was no small feat back then and it required some pretty serious motorcycle hardware. At first, riders would just strip their bikes of all non-essential parts to make them faster but soon the manufacturers got into the act and developed a very specific style of bike that became what we still know as the Cafe Racer.

Unfortunately, as time went on, larger and better roads were built and the vehicle traffic coming past the Ace Cafe slowly diminished to the point that the cafe closed its doors for the last time in 1969. What endured, however, were the memories of those who hung out at the Ace, and soon nostalgia for those days grew to the point that a man named Mark Wilsmore organized a reunion in 1994 for the 25th anniversary of the closing of the cafe. It happened at the original building which was by then being used as a tire (or tyre, for the British folks in the crowd) store. 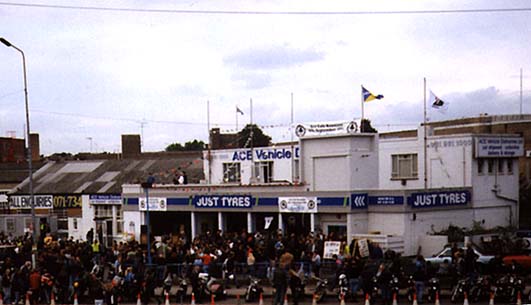 It was such a success that Wilsmore began planning a new and improved Ace Cafe. By 1997, he had purchased the original building and opened a portion of the cafe and by 2001 he took over the rest of the building and the full Ace Cafe was ready for its grand reopening. 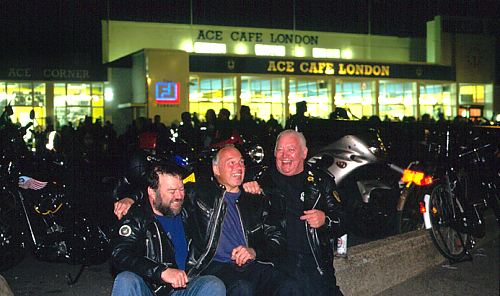 Since then, Ace Cafes have been opened in Lahti, Beijing, Orlando, and Barcelona.

Every year in September, the Cafe hosts a reunion of all things Ace, Rockers, and motorcycle culture. This year, the reunion was held September 2-4 and on each of those days, hundreds of bikers came to the cafe to drink, eat, meet old and new friends and drool over an amazing assortment of two-wheeled machinery. Everything from 60-year-old Nortons to brand-new BMWs, Harleys, and Triumphs showed up for all to enjoy. Leather jackets were the clothing of choice and many riders dressed in the fashion of the Rockers of old. On Saturday night, an absolutely awesome 50s band called the Mee Kats rocked the place and made it feel like we were all teenagers again. You really couldn’t have asked for a better time.

The culmination of the event was a Sunday ride out from the cafe to the beach at Brighton, a distance of more than 80 miles. It’s hard to guess but I would think well over 1000 bikes showed up for the ride. The mayor of the small London suburb the cafe is located in even came out to mark the start of the ride. Here’s what it looked like as they filed out of the parking lot:

If you ever have the chance to come to a future reunion, I highly recommend it. Or, even if you can’t make it on those days, stop by the Ace Cafe any time, there’s always something going on. It’s a fabulous place. I hope to be able to come back in the years to come but for now, I will leave you with these pics from three fantastic days. 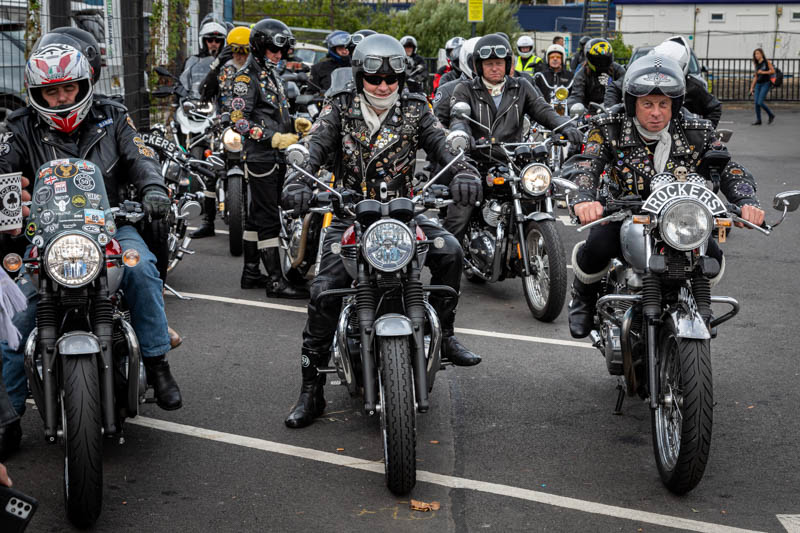 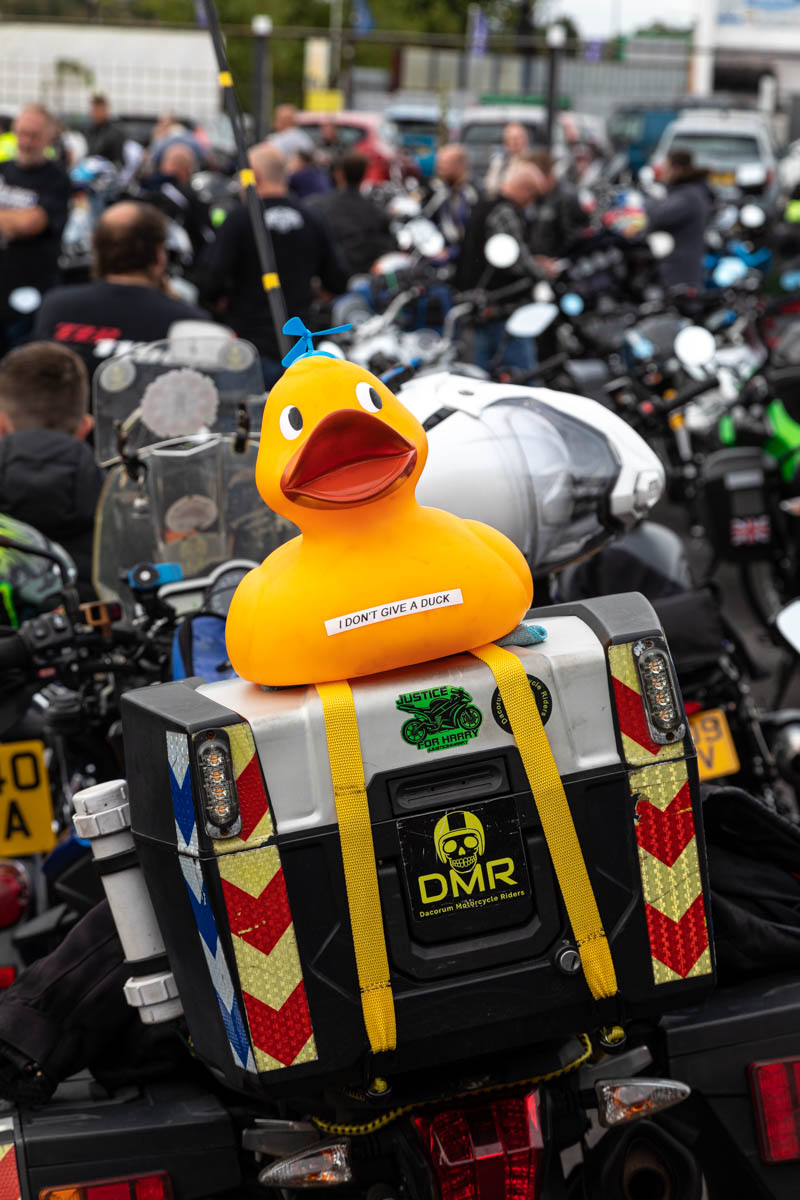 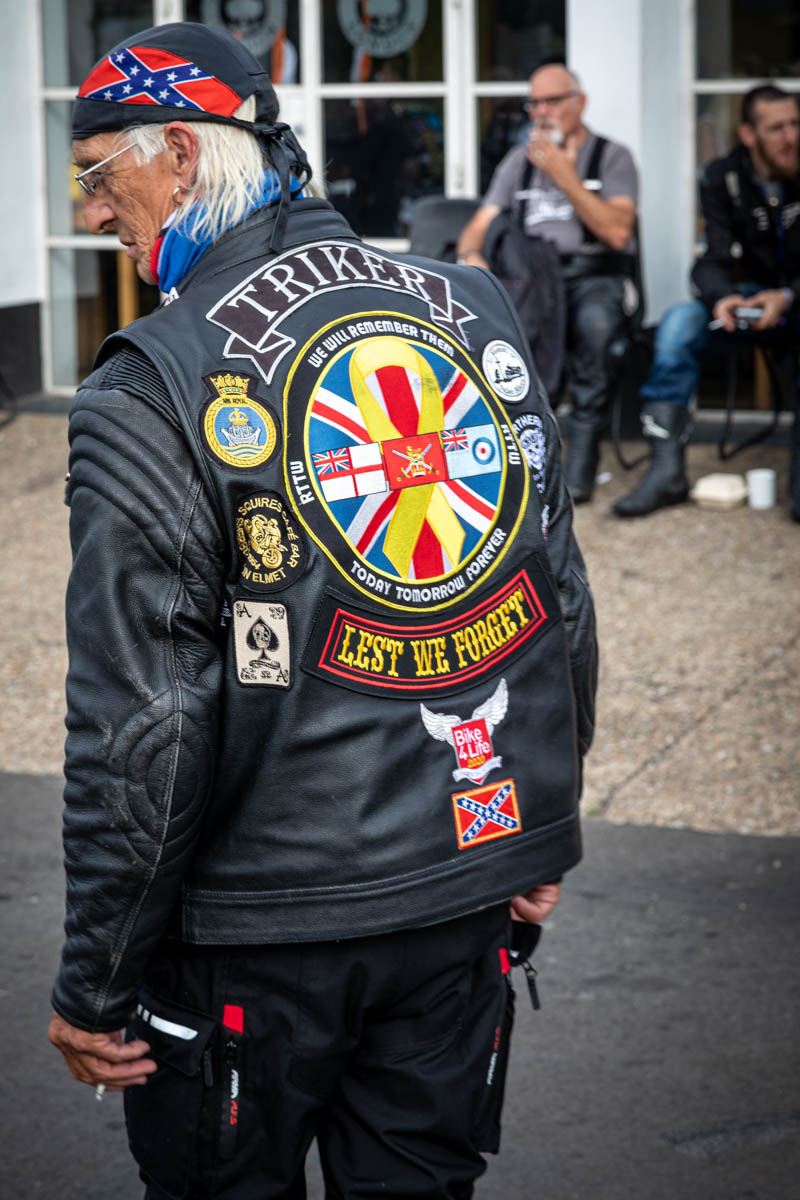 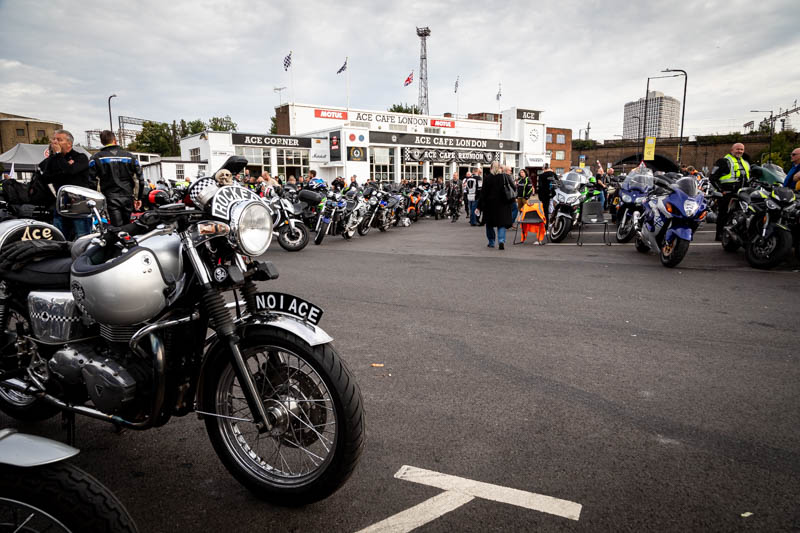 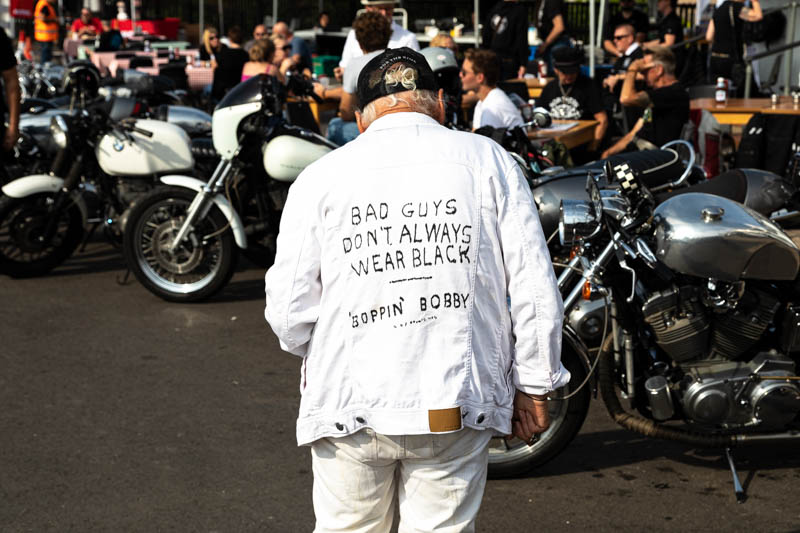 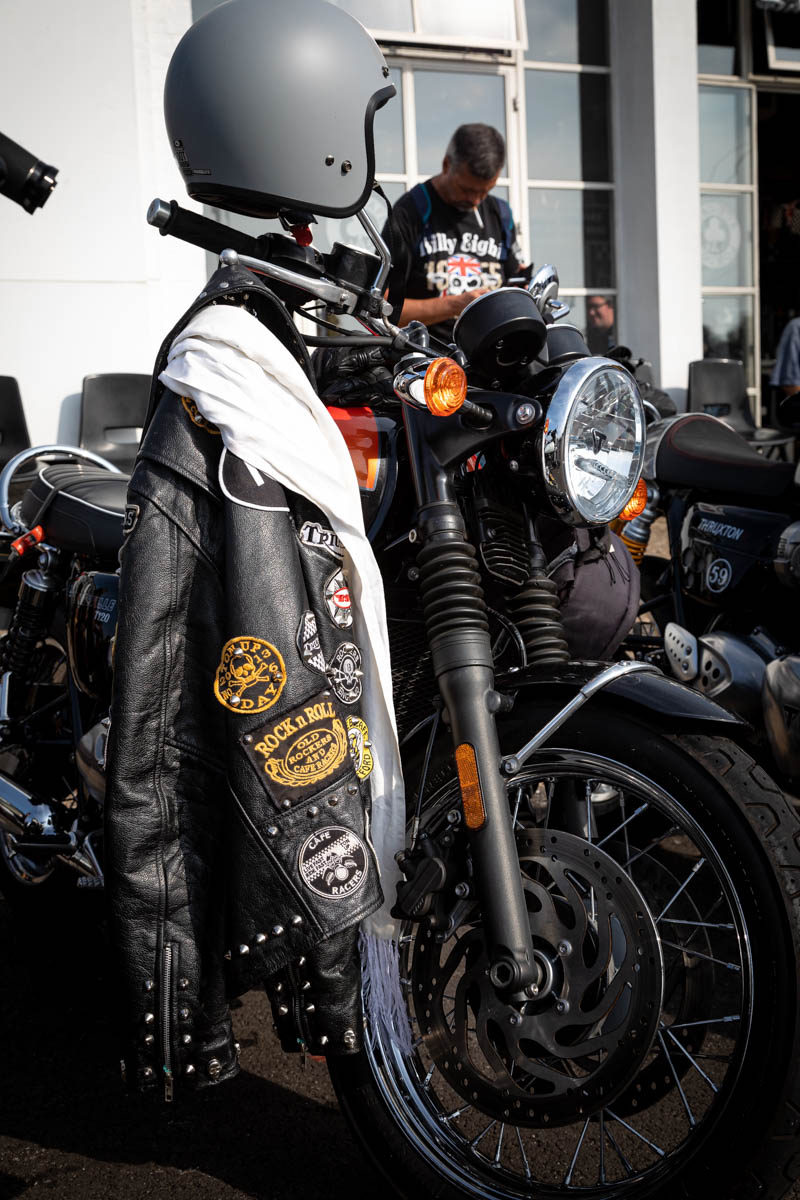 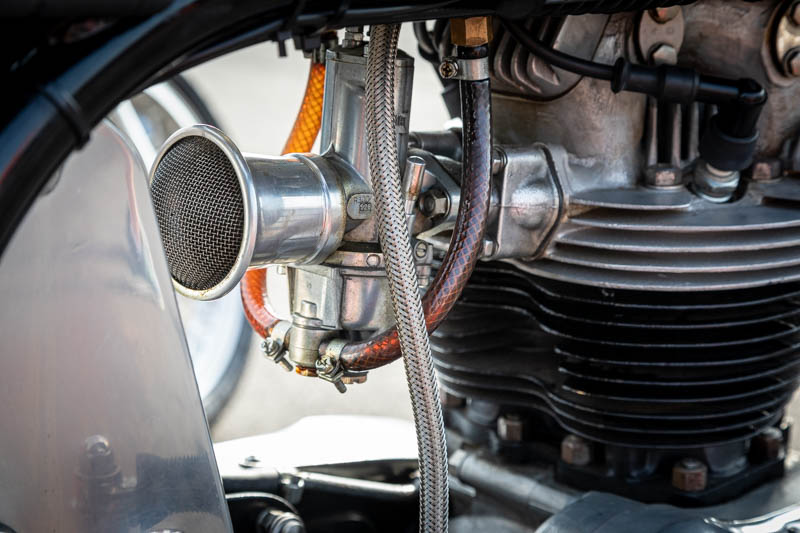 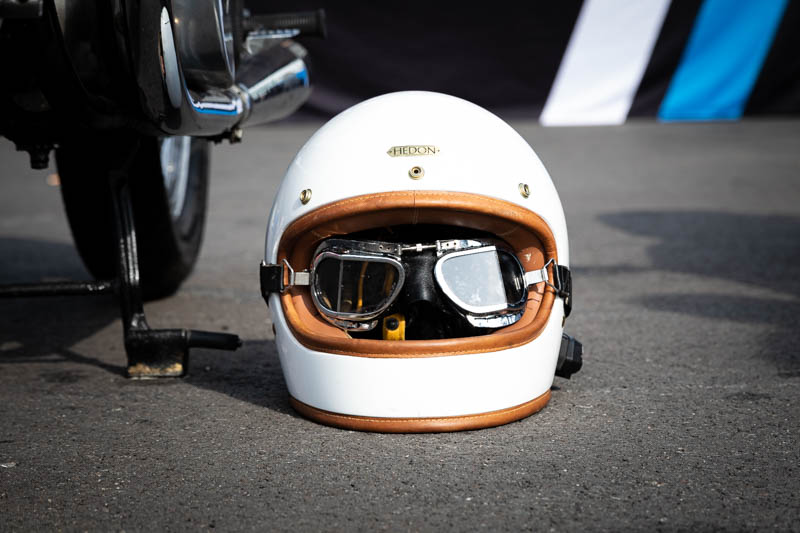 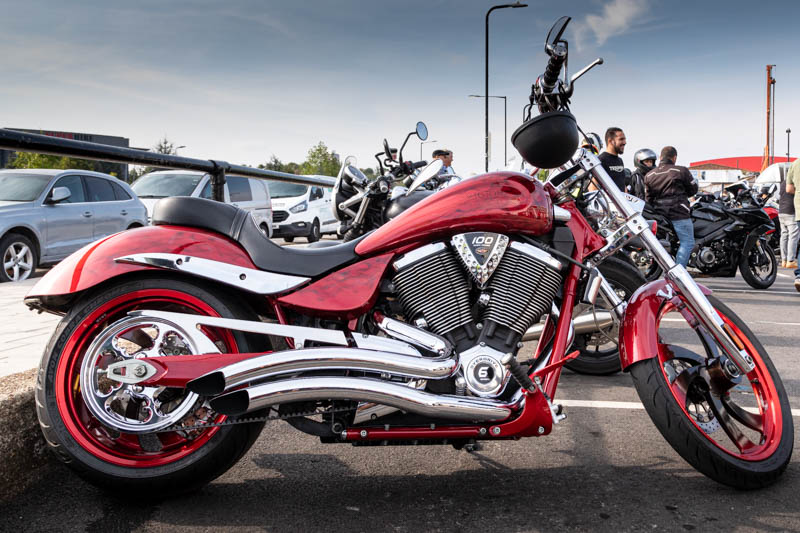 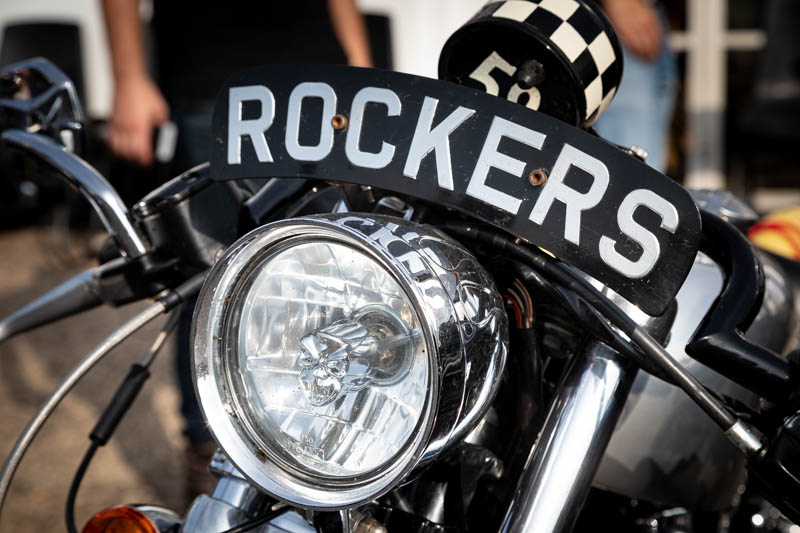 I have been an automotive engineer for all 31 years of my career, mostly leading chassis design work. Some fun suspension projects I led: The 2005 Ford GT and 2012 Tesla Model S.
Read All My Posts »
PrevPreviousThe Mercedes-AMG S63 E Performance With 1,055 Lb.-Ft. Of Torque Is A High-Tech Dinosaur In All The Best Ways
NextThis Vintage Fiberglass Camper Is Like A Spaceship Bolted To A ToyotaNext