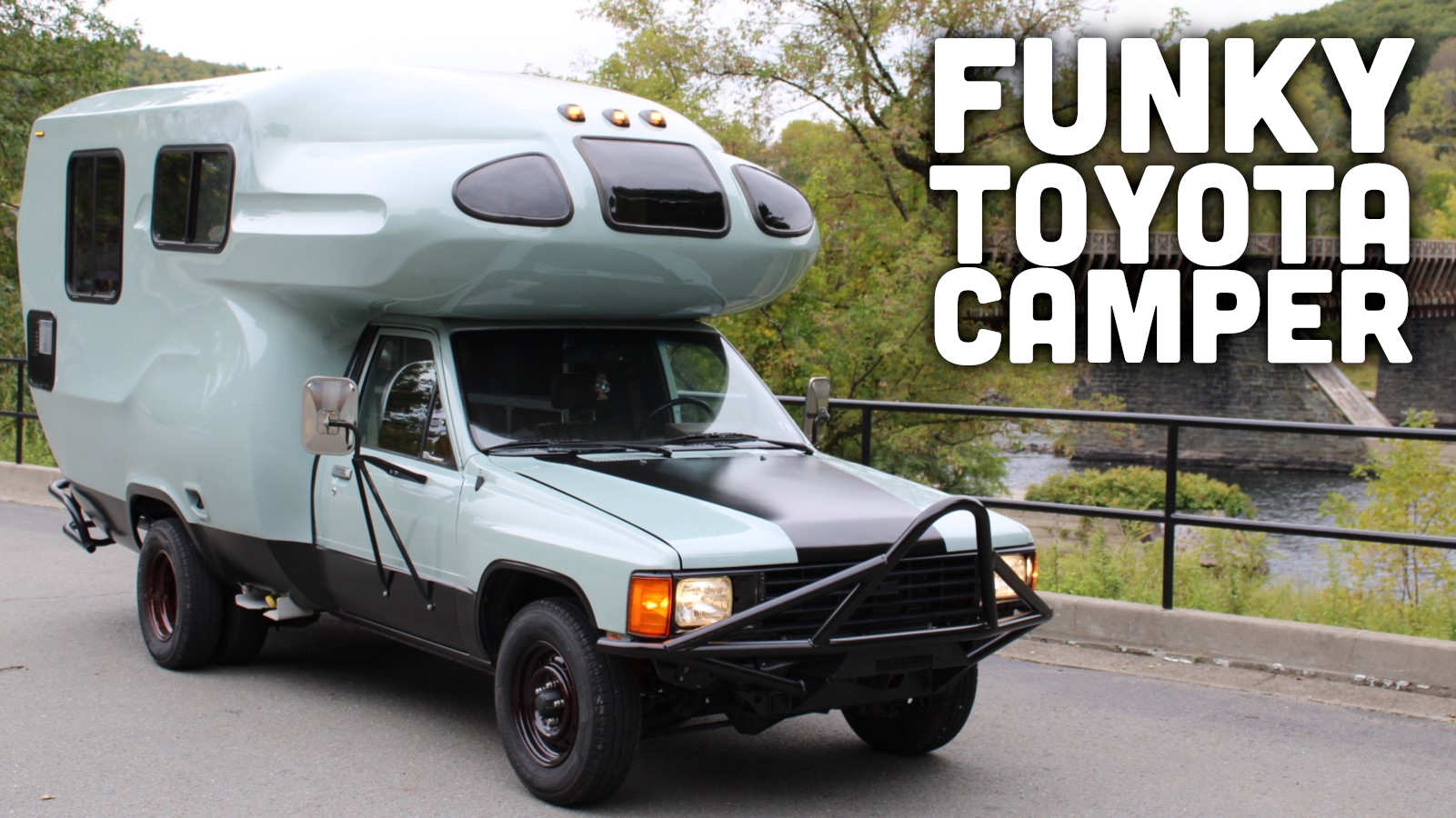 Gracing the pages of Bring a Trailer today is a camper that looks like it exists in two centuries at the same time. This 1985 Toyota Mirage camper looks like a Chinook RV from 100 years in the future, or a spaceship that crashed into the back of a pickup truck. It’s a weird 1980s fiberglass camper on top of a dependable Toyota platform, and you could actually camp in it today!

A couple of weeks ago, I spotted something that made me perhaps irrationally excited. On the way to my parents’ house for Thanksgiving dinner, I saw a little Toyota Dolphin camper pulling out of a residence and off to the great beyond. I couldn’t stop and turn around in time to catch it. So you’ll have to trust me when I say that this thing was in mint condition, and you could see some modern upgrades like LED lighting and solar panels. Seeing a camper always makes me smile, but seeing a piece of camping history still doing its job makes my heart skip. Keeping old campers alive isn’t easy, so kudos to you, Dolphin driver.

I’ve been thinking about finding a minty Toyota camper to feature here, but until today, I hadn’t found one that really hit the spot. Thanks to this incredible Bring a Trailer auction, not only did I find a cool Toyota-based camper, but one that’s a new discovery even for me. This 1985 Toyota Mirage camper is sweet, and I can’t get over how it looks like it came from 1985 and 2185 at the same time.

Finding the history on this one was difficult. The Bring a Trailer listing doesn’t offer much. Ask Google about the Toyota Mirage and the search engine will think that you’re actually searching for information on the Mitsubishi Mirage. Despite this, I’ve been able to piece together some information on the company that built this thing.

Just a few years after Toyota launched in the United States, the company already had trucks on American roads. First came the truck version of the Land Cruiser in 1963, which was joined by the Stout in 1964. Then came the Hilux. Launched in 1968, this pickup would bear the Hilux name until 1976, when it was renamed “Truck” in the North American market. Regardless if they’re called a Hilux or a Truck, through its generations this gained a reputation for durability. Top Gear famously tried killing one using fire, seawater, crashes, and even a building collapse, and it continued to drive.

In the early 1970s, a number of RV manufacturers chose the Hilux as the backbones for their Class C camper models. Famed motorhome producer Chinook built fiberglass campers out of Toyota pickups starting in 1973. But Toyota wasn’t exclusive to Chinook, and offered its half-ton chassis to a number of manufacturers. Eventually, the market of Toyota Truck-based RVs was crowded with offerings from Chinook, Coachmen, Dolphin Sunrader, Warrior, Winnebago, and many more. Some enthusiasts estimate that there were up to 60 different styles and models of Toyota-based campers.

One of these models was created by Mirage Industries in Elkhart, Indiana. Information about this company is thin. Someone on a forum claimed to know a lot, but never gave out the details on the public forum. Weirdly, J.D. Power has a blurb on the company, and it reads like this:

Builder of a Toyota-based Class C motorhome, Mirage came into existence in the 1970s when the United States pressured recreational vehicle manufacturers demanded more fuel efficient options. Ranging in lengths from 16.5 to 21 feet, Mirage motorhomes consumed gasoline at a gallon every 20 miles. Well-equipped for individual or vacationing couples on the inside, the exterior of Mirage motorhomes were stylish looking vehicles. The Toyota truck-based Mirage motorhomes were last produced in 1986.

J.D. Power goes on to note that the company itself went belly-up in 1986, before Toyota-based campers even went out of style. It’s said that Toyota stopped producing chassis for motorhome makers in 1994 or 1995. The Toyota Truck evolved into the Tacoma in 1995 in America, so that makes sense.

It’s also said that these Toyota Mirage campers are pretty rare, though I could not find production numbers anywhere for them. Now, the combination of a dead company and “rare” would normally be a headache of a proposition. Who knows what parts you’ll be able to find. Thankfully, the Toyota Mirage that you see here has been through a recent refurbishment.

According to the Bring a Trailer listing, back in 2020 this Mirage was gone through mechanically and cosmetically. And it certainly looks good.

I’ve seen a lot of truck campers with these fiberglass shells on the back. It’s something that Chinook is famous for. But what I haven’t seen is a fiberglass shell that looks like a runabout from Star Trek or a Halo game. The design is all kinds of funky and I love it. Though, the part that I love perhaps a little more is how that futuristic camper blends into the totally ’80s Toyota Truck.

That freshened engine is supported with a new alternator, coil, exhaust manifold, radiator, radiator hoses, water pump, and more. Powers sent to the rear dual wheels through an automatic transmission. The transmission and differential are noted to have been rebuilt, too. This is certainly not a fast RV. But with that dependable engine, it will probably run longer than you will. But if you care about speed, the seller says they’ve had the 5,000-pound camper up to 80 mph, but it seems happier with 65 mph to 70 mph.

This camper is looking like a Ship of Theseus and it continues inside, where the camper cabin has been given a total makeover. The list of changes is huge:

The camper cabin was reportedly re-outfitted under current ownership, and work involved replacing the furnishings, windows, mechanical systems, and power systems. Features include slow-close cabinets with magnetic latches, open shelves, woodgrain flooring, two bench seats with internal storage, overhead lighting, a USB power port, and audio speakers. Additional equipment consists of a ceiling vent, four side windows with sliding panels, and a Webasto gasoline-powered air heater that is connected to the vehicle fuel tank. The kitchenette is equipped with butcher block countertops, a sink and faucet, a Blackstone three-burner propane range, a Dometic 12-volt refrigerator/freezer, and a five-gallon water heater.

Sadly, there is no shower or a toilet, but those are issues that can be rectified. You get a 17-gallon tank for freshwater, a 15-gallon gray water tank, and a 3-gallon propane tank. Since that freshwater tank is really feeding only a sink and a water heater, you could feed off of it for an outdoor shower setup. Add in a cassette toilet and you have a rig that you can camp in wherever the road takes you. Perhaps even cooler is that the seller says that the Mirage is set up for cold weather camping. The fiberglass shell is said to have three layers, and the water line is kept from freezing with an electric heater.

While not perfect, this camper is absolutely epic. It has a reliable engine and that fiberglass camping unit should be good for years. In theory, this is something that could be on the road for a long time before even looking at a dealership, and that’s awesome. If you think so too, the auction is thus far pretty reasonable. It’s $10,750 with five days to go on Bring a Trailer.

Mercedes is a lifelong fan of all things powered by an engine. When she isn't driving one of her five Smart Fortwos or her 14 other vehicles she could be found in the cockpit of a Cessna 172 or perhaps swimming in any body of water that she could find. She also has a deep love for buses of all kinds. Please send her buses. mercedes@theautopian.com Instagram: @mistymotors Twitter: @Miss_Mercedes30 Facebook.com/neonspinnazz
Read All My Posts »
PrevPreviousWhat It Was Like Visiting The Birthplace Of The ‘Cafe Racer’ Motorcycle — London’s Ace Cafe
NextHow A Dodge Neon Fulfilled A Racing Dream And Also Helped Raise A Family: COTDNext