Facebook-f Twitter Instagram Rss
Menu
Menu
Home » Why Do Autonomous Cars Keep Shutting Down On This One San Francisco Street?

Why Do Autonomous Cars Keep Shutting Down On This One San Francisco Street? 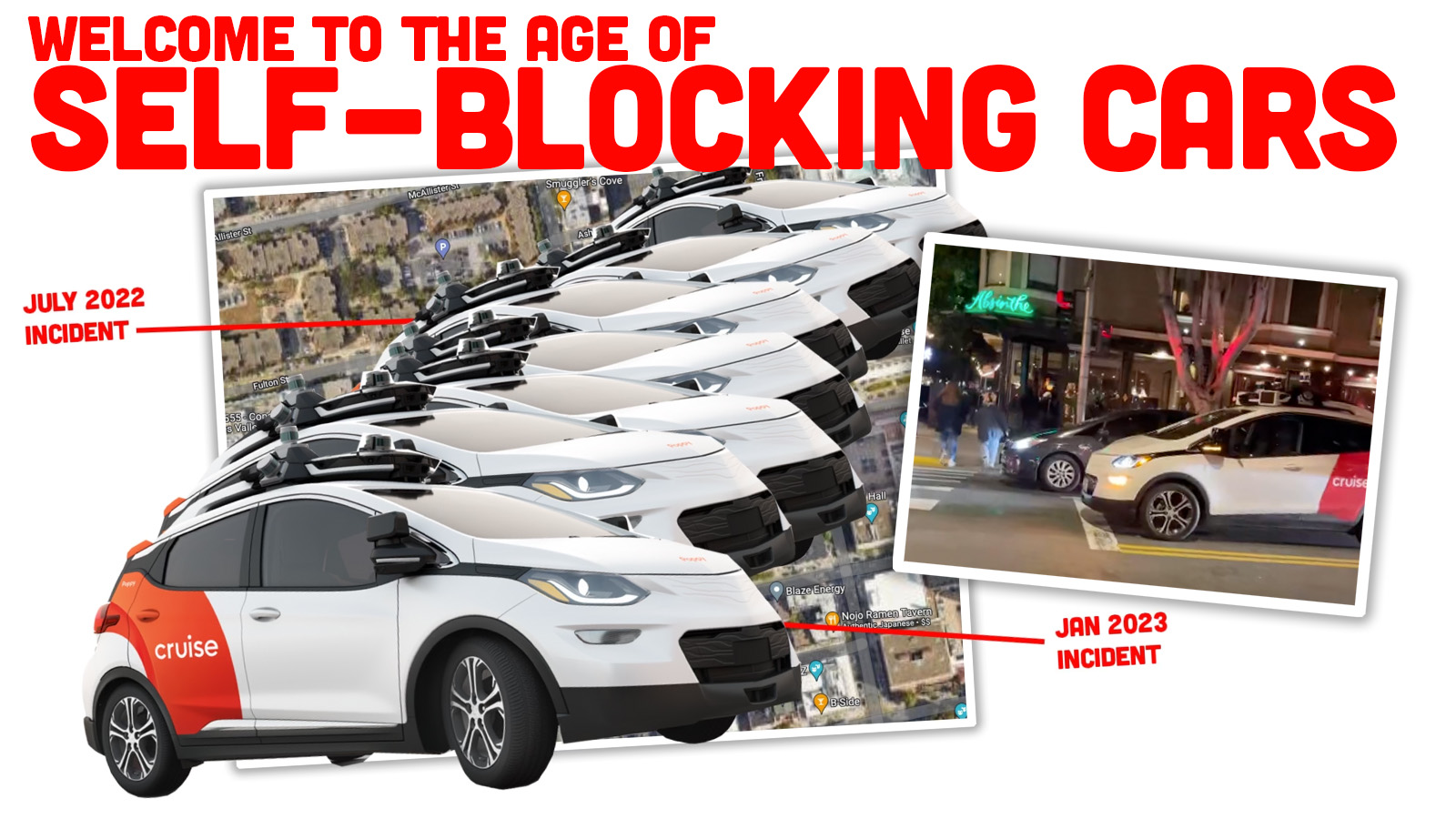 Remember this past summer when a shocking number – some sources say up to 20 – of Cruise self-driving cars converged on one San Francisco intersection and blocked traffic for about two hours? That was bonkers. It seems that has happened again, a few nights ago, this time with only six cars, which is still plenty to block traffic with — but this time the unexpected and arcane Gathering of the Driving Robots only lasted 20 minutes. Still, it’s an ass-pain, but it’s an interesting sort of ass-pain, and one that may suggest issues we’ll be encountering in the future. Also, the location of the most recent one shares a street with the July incident, and is pretty close by. What’s going on?

For some background: Cruise operates a fleet of Level 4 automated Chevy Bolts in San Francisco (as well as Austin and Phoenix) for people to get rides in, between the hours of 10 pm to 5:30 am. The vehicles are driverless, and operate only within a specific area of the city, hence the Level 4 designation, which specifies a restricted operational driving domain (ODD). All of the vehicles involved here were part of this program.

Here’s a tweet with some video of the six-Cruise-car gathering at the intersection:

A friend of mine took a video in San Francisco tonight of 6 @Cruise self-driving cars stopped at an intersection for 20 min. Traffic came to a standstill + people didn’t know what to do. Two of the cars were on wrong side of the road. Doesn’t seem particularly safe. #Autonomous pic.twitter.com/tKZrHgrdEi

There’s also video of when one of the cars eventually decided it was time to head out, for artificial intelligence reasons we can only guess at:

Here’s the other video, when one of the cars decided to finally move on. pic.twitter.com/VSj1NlML2Q

Cruise did issue a statement in response to the tweets of the event, suggesting that just one of the cars had a technical issue, though that doesn’t really explain why the other five were stuck, too:

thanks for sharing. One of our cars had a technical issue and needed to be moved by our field team (who were quickly dispatched and took ~15-20 min to clear the car). All other Cruise vehicles were able to proceed autonomously. We apologize to anyone who was inconvenienced. 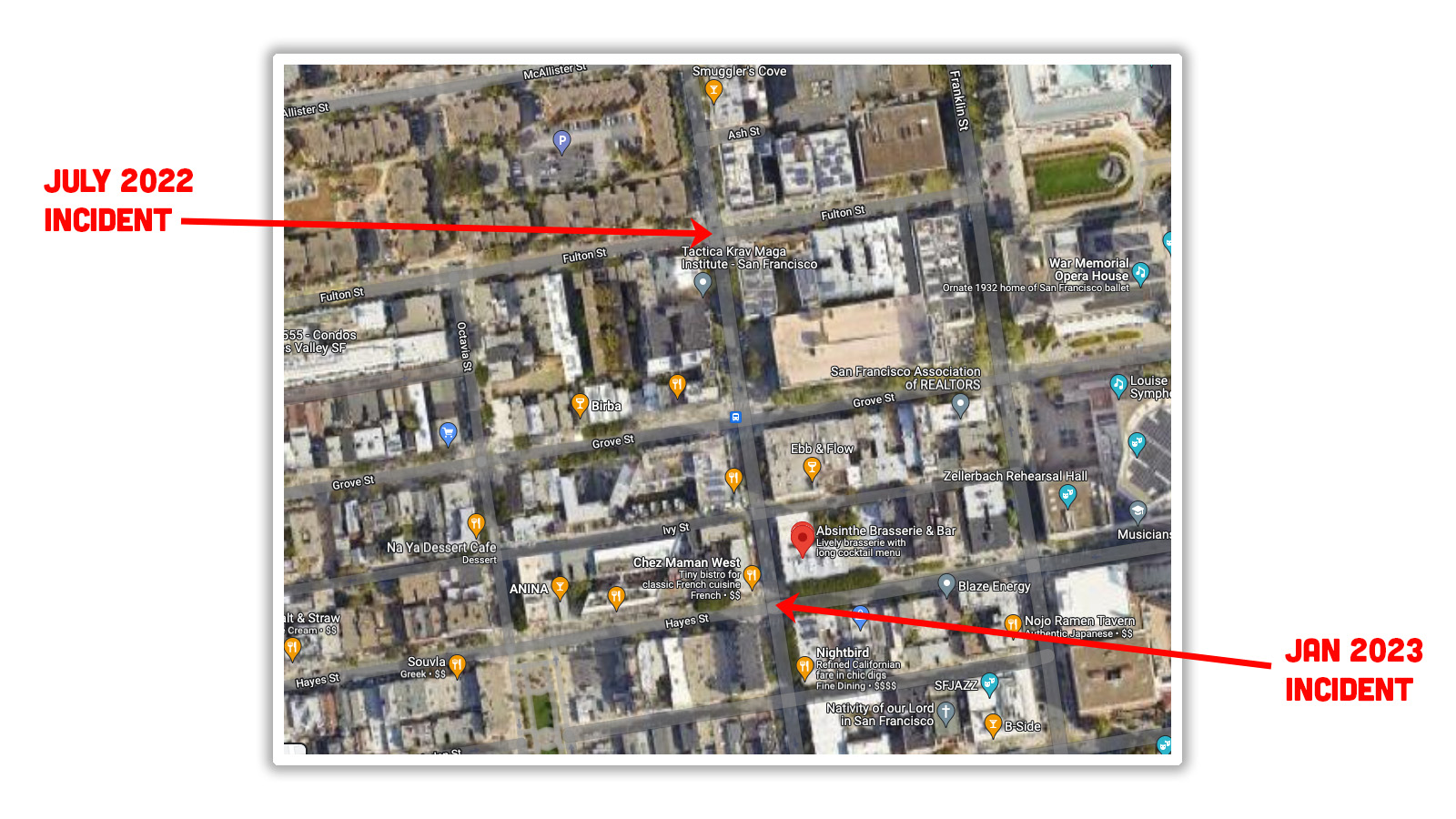 So, what’s these cars problem with Gough Street? Or maybe this neighborhood? The two gatherings happened within two blocks of each other, on the same street. Is there some secret computer buried underground in the, as the Absinthe website says, “charming Hayes Valley neighborhood” that is calling her mobile children to her, to receive secret orders? Probably not, but maybe!

The ODD (again, Operational Driving Domain, basically the working area of the cars) Cruise uses is pretty large, covering a lot of the northern part of the city: 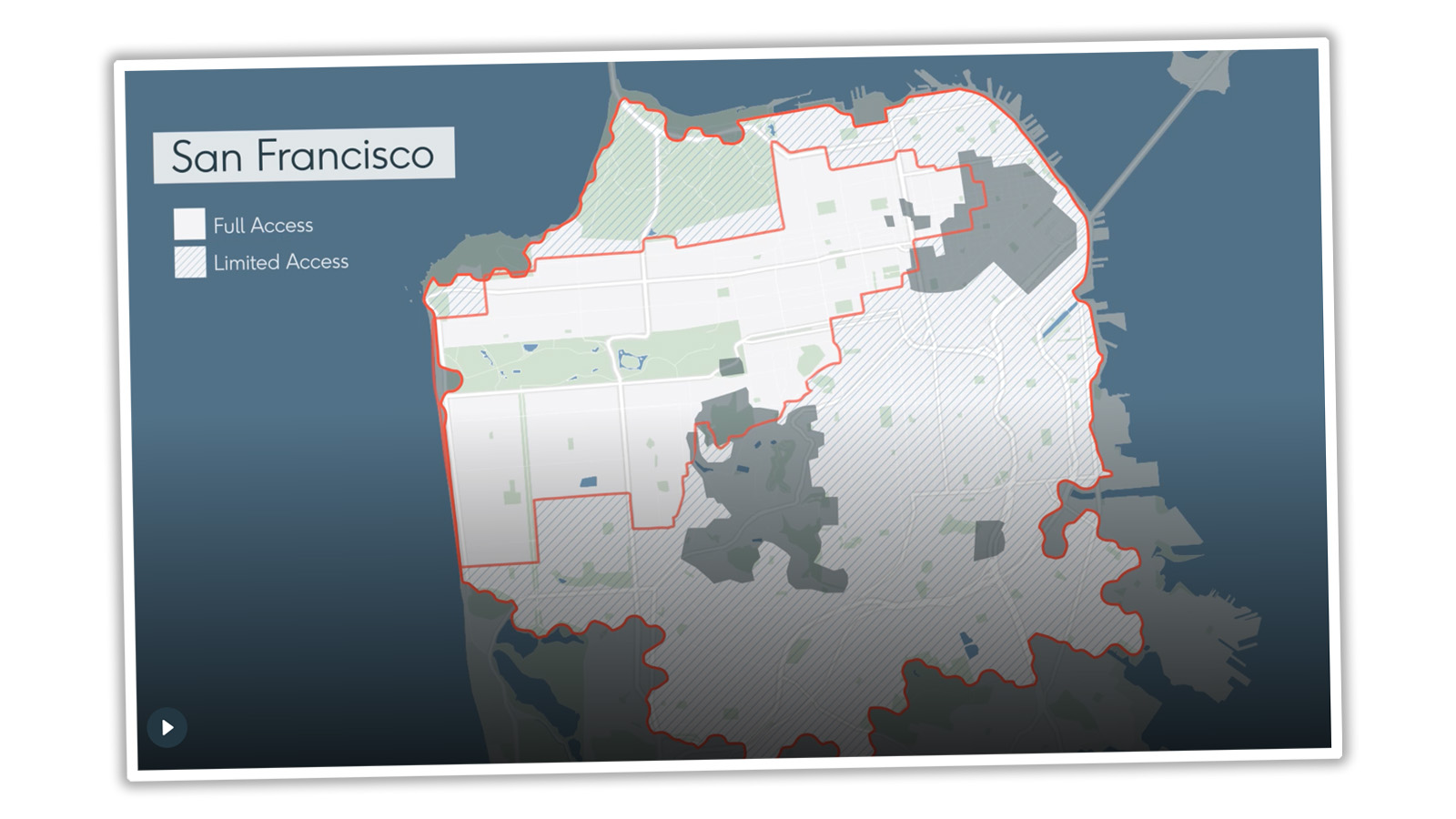 …and that map is very zoomed out and simplified; there’s a massive number of streets in that area, and only the major ones are shown in that map. I point this out because it seems too big an area for these two incidents to be just chance, that close together, right?

Cruise hasn’t come forth with a specific explanation about what happened, and based on past behavior, I would not counsel any breath-holding until they do. What is interesting to realize, though, is that autonomous vehicles aren’t like human drivers in that they operate on a common set of rules and logic (well, common for their specific programming) so if something causes one to be confused or fail, it could become a mass event and cascade of failures, because they’re all working with the same tools, interacting with the same inputs.

Over-the-air software updates could both be the sort of thing that fixes these incidents, and potentially causes them. If thousands and thousands of cars get an update with a bug, then thousands and thousands of cars could potentially suffer the same failures, at the same time. It’s even possible in the same place. We just don’t know all the possibilities yet, but we do know very well that commercial software can definitely have bugs and that computer that drive cars are not like independent humans, capable of creative thought.

I’ve reached out to Cruise to see if they’re willing to provide any more detail, and will update if they do.

New IIHS Study Confirms What We Suspected About Tesla’s Autopilot And Other Level 2 Driver Assist Systems: People Are Dangerously Confused

I'm a co-founder of the Autopian, the site you're on RIGHT NOW! I'm here to talk to you about taillights until you cry and beg me to stop, which I absolutely will not. Sorry. Hug? Also, David's friend.
Read All My Posts »
PrevPreviousThis Ingenious ‘Tire Within A Tire’ Could Save Your RV From A Violent Blowout
NextData Shows That SUVs Are Devouring All Other Types Of Car On The MarketNext