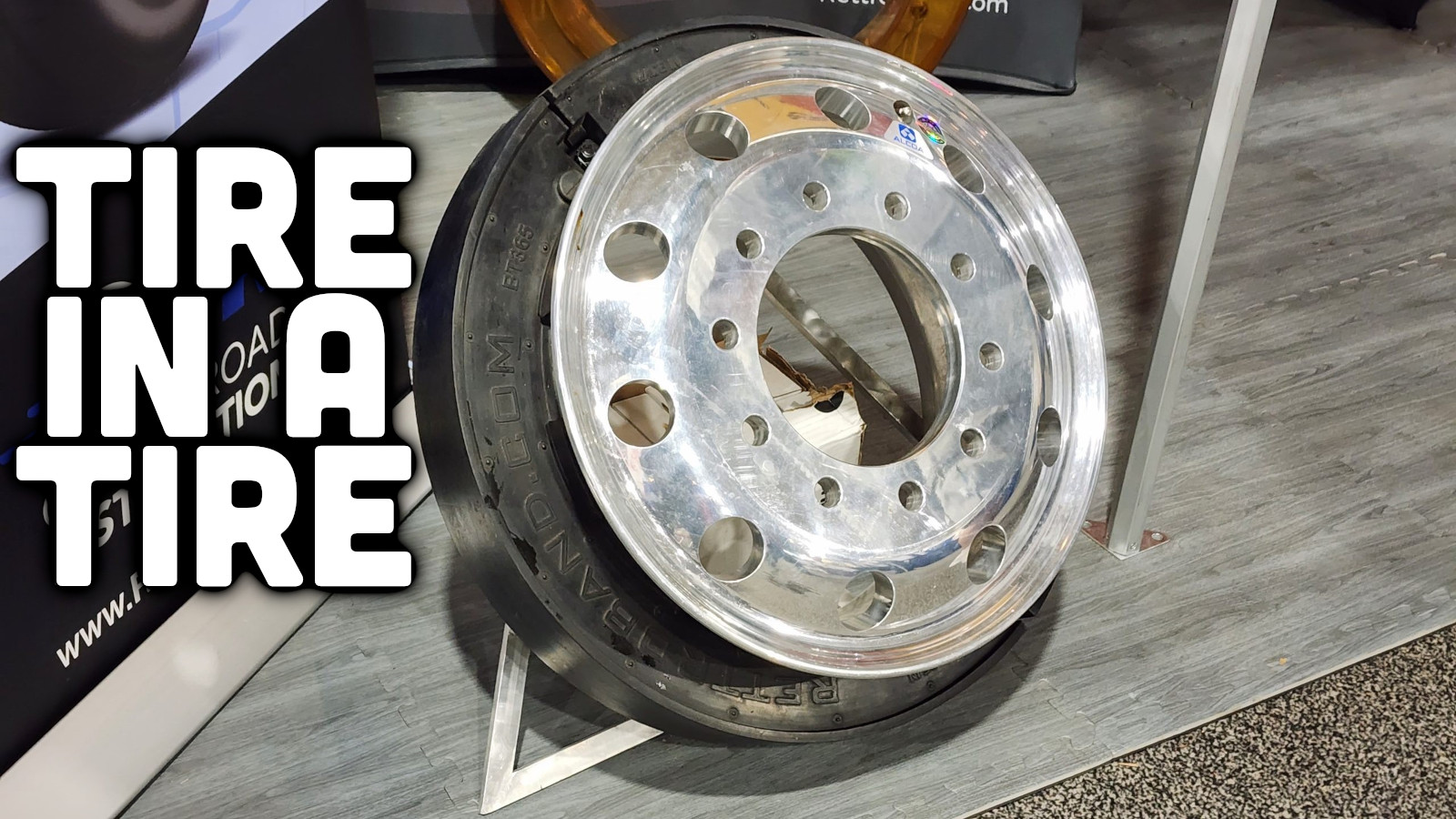 Tire blowouts have long been one of the worst nightmares of a motorhome operator. If you blow a steer tire—the ones up front, doing the actual steering—on an RV, the aftermath can be dramatic, with your mangled tire and wheel suddenly yanking the rig off of the road. This can be deadly, but one company believes that it doesn’t have to be.

The 2023 Florida RV SuperShow isn’t just for camper manufacturers to show off the best that they have, but also for suppliers to display their latest tech. Many of the suppliers in the event’s two stadiums offer stuff like e-bikes, wooden plaques, and massage chairs that look like adult-size baby car seats. Some have more practical stuff like solar panels and water purifiers. One person is even selling lipstick made to match your RV’s paint job. My favorite piece of RV tech at the show thus far is one that doesn’t make you match your camper, but one that could save your life.

Tire Blowouts Are Rare But Dangerous

While a statistic isn’t available for RVs, a 2007 study by the Federal Motor Carrier Safety Administration looked at 141,000 large trucks (straight trucks, semis, etc) that were involved in crashes. Tire problems were linked to the crashes involving 8,000 of those trucks, or six percent. This is to say that while tire blowouts are rare with proper care and maintenance, they can happen. For an example relating to RVs, the infamous recalled Goodyear G159 tire is reportedly linked to 95 known deaths and injuries.

Steer tire blowouts are a big deal because things can go south fast. If your steer blows, the RV may pull hard toward the dying tire, threatening to send you off the road. In a panic, you may think to stomp on the brakes and get your rig to a quick stop, but truckers, as well as tire manufacturer Michelin, say that is the exact wrong thing to do.

Both say that by hitting your brakes, you’re only putting more weight on the blown tire, making the pull from the tire worse, and you may find yourself losing control of your RV or semi. Instead, when your steer blows, your first reaction should be to put the pedal to the floor, which should help reduce the pull because of the blown tire.

However, all of this has to happen quickly, and you have to remember to do it in a panic. Even pilots sometimes forget their training when they’re faced with an emergency. For Brett Davis, owner of National Indoor RV Center (NIRVC), the severity of a tire blowout is worth having some backup. Davis met up with Robert Craig, the founder of Craig International Ballistics, a supplier of armor to the Australian military. The pair decided to develop a kind of run-flat tire that would help give Class A and Class B RV owners peace of mind.

This concept isn’t new. Tyron USA has long offered a device that supports a tire after a blowout, aiding in control with the goal of preventing a crash.

The Tyron design calls for a band that’s mounted to the inside of a wheel. When the tire blows, the Tyron bands try to prevent the tire bead from collapsing. Rettroband even has direct competition with the similar RV Safety Band and Spartan RV Chassis with its Red Diamond RunFlat. These remind me of a ring-type run flat device for cars, but scaled up and able to support the weight of a coach.

The Rettroband is also a product that locks onto your wheel, but the way it works is different from the Tyron. Each Rettroband is made from two bands of hardened rubber. The thick rubber is reinforced with stainless steel that runs the entire length of each band.

Each band also gets metal pins that go through the rubber and the stainless steel core. There are four pins in all and threaded bolts are used in conjunction with gearboxes to join the Rettroband halves together.

Davis says that design, engineering, and testing took 3.5 years. Testing not only involved bench testing Rettrobands to see when they would fail but also involved intentionally blowing up steer tires on loaded RVs equipped with the product.

Installation is done at NIRVC locations and third-party installers, where technicians first dismount the steer tire, then feed the Rettroband through. The threaded bolts are then tightened until the band halves come together. After that, the tire is inflated and balanced as usual.

In the event of a tire blowout, Davis says that the Rettroband will do two things. First, and perhaps most importantly, the RV will lower onto the Rettroband, using it as an emergency spare tire. The Rettroband has a larger diameter than the wheel, thus when the coach is riding on the product, the wheel is not digging into the ground.

Next, the Rettroband is also helping to keep the tire intact for as long as possible. The goal of the Rettroband is not just to reduce the jerking motion caused by a tire blowout, but to allow the operator of a coach to limp their rig to the safest place to pull over.

This is a product that actually exists and can be purchased. Davis and Craig even hopped into an RV with a tire rigged to blow up just to show that it works. Perhaps the coolest thing about this is that Rettrobands are already in the hands of RV owners and are already getting used in real-life situations. Davis says that dozens of customers have already experienced blowouts where their Rettrobands did their job.

Sure enough, when I search RV forums there are perhaps countless RV owners who swear by this particular product. I got to see it with my own eyes at the Florida RV SuperShow. While there, I found a few more Class A owners that say that they have this product. None of the people I talked to had to use their Rettrobands yet, and they hope they never have to. However, they hope that these will save them from repeating their previous nightmare experiences of keeping a rig on the road post-blowout.

What you’re looking at here is the second version of the Rettroband. The first version was made out of yellow polyurethane (below) and it was discovered to have a flaw that allowed an installer to over-torque the bolt and gearbox setup.

Allegedly, third-party installers used impacts and zipped on the bolts so tight that they damaged the Rettrobands. Apparently, NIRVC’s own installers also over-torqued the bolts. As a result, the polyurethane cracked. A number of customers reported Rettrobands self-destructing inside of their tires without a blowout even occurring. The company voluntarily recalled the product and replaced them with the rubber and stainless steel version.

Alright, so you’re probably thinking that there’s a catch. Unfortunately, there are a few.

Perhaps the biggest is that Rettrobands are currently only for 22.5-inch wheels. That means if you have a smaller rig, you are for now out of luck. NIRVC has also imposed a restriction on tire age. The company has found that older tires can get damaged during the Rettroband installation process, thus necessitating their replacement. Thus, NIRVC only works with tires three years old and newer. The company will also install Rettrobands on wheels with tires older than three years, but younger than four years on a case-by-case basis. NIRVC is also the sole distributor and it has relatively few locations, so don’t expect your local RV dealer to be able to sell you Rettrobands.

That brings us to the next point, and that’s cost. Rettrobands up to a 305 tire width cost $3,595. Moving up to a 315-width tire will cost you $4,595, while a Rettroband fitting a 365 sets you back $4,695. You could replace a pair of steer tires multiple times and still be under a Rettroband’s cost. Some see the money as insurance against an RVer’s nightmare. There is some good news, too, as the installation is free, as are replacement Rettrobands following a blowout. The company wants used Rettrobands back so they could be tested by a lab.

I will reiterate here that tire blowouts are not something that you should expect from RV ownership. Plenty of folks travel tens of thousands of miles or more without ever having a blowout. And sometimes, blowouts don’t cause the catastrophes that you can see on YouTube. Still, I like that something like this does exist.

Camping Tech: Here’s How You Can Add A Faucet To A Budget Camper Setup

Camping Tech: This Startup Company Says It Has A Solution For Destructive Camper Tire Blowouts

RV Quality Has Gotten So Bad That $62,800 Buys You A Camper With Broken Safety Equipment

Mercedes is a lifelong fan of all things powered by an engine. When she isn't driving one of her five Smart Fortwos or her 14 other vehicles she could be found in the cockpit of a Cessna 172 or perhaps swimming in any body of water that she could find. She also has a deep love for buses of all kinds. Please send her buses. mercedes@theautopian.com Instagram: @mistymotors Twitter: @Miss_Mercedes30 Facebook.com/neonspinnazz
Read All My Posts »
PrevPreviousWhat It Was Like Taking A $58 Round-Trip Flight From Chicago To Florida
NextWhy Do Autonomous Cars Keep Shutting Down On This One San Francisco Street?Next