This week I spent four days in warm and sunny Tampa, Florida. While I was officially there for the 2023 Florida RV SuperShow, it was also just nice to get away from the gray, cold, gloomy weather of Illinois. To get there, I took the cheapest possible round-trip flight that I’ve seen in my entire life. Somehow, I scored a round-trip flight aboard Frontier Airlines for just $58, and — looking back — it now just feels so wrong.

Despite my love for all things aviation, I’ve been flying airplanes since just late 2016. Up to that point, I’d just never needed to fly. If I traveled, it was almost always via the driver’s seat of an SUV, likely towing a camper somewhere. On October 20, 2016, that changed when I boarded my first-ever plane flight, a 7:45 AM trip aboard “Fallon The Falcon,” a Frontier Airlines Airbus A321 that had taken its first official trip just four months prior.

It was a truly magical flight for me, and even further cemented my love for commercial aircraft. My very first flight, which was from Chicago’s O’Hare International Airport to Los Angeles International Airport, cost me just $60. The next year, I took a flight aboard a Spirit Airlines A320 to Denver for just $31.

Since then, that Spirit flight held my personal record for the cheapest flight. That flight alone is pretty boggling when you think about it. That $31 ticket that got me 900 miles westward cost me significantly less than it would have cost me to fuel up a small sedan for a trip of the same distance. Heck, $31 is cheaper than what you’d pay to take a Greyhound or a train!

In the almost six years since that flight, I’ve never come close to that price on a plane ticket. One time I paid $210 to get crammed into a Bombardier CRJ-200 for just a touch over an hour. On another, I somehow found myself paying $370 for a red-eye aboard Spirit. To this day I think that was my worst-ever flight. And that was $370 with zero of Spirit’s microtransactions. At least I got a free margarita on that plane; I’m still confused as to why the flight attendant was giving everyone free booze that night.

Even in the middle of the pandemic, when air travel took a clobbering, I still paid at least $120 for one-way flights. So, when it came time to schedule my flights for the RV show, what David Tracy found was shocking. 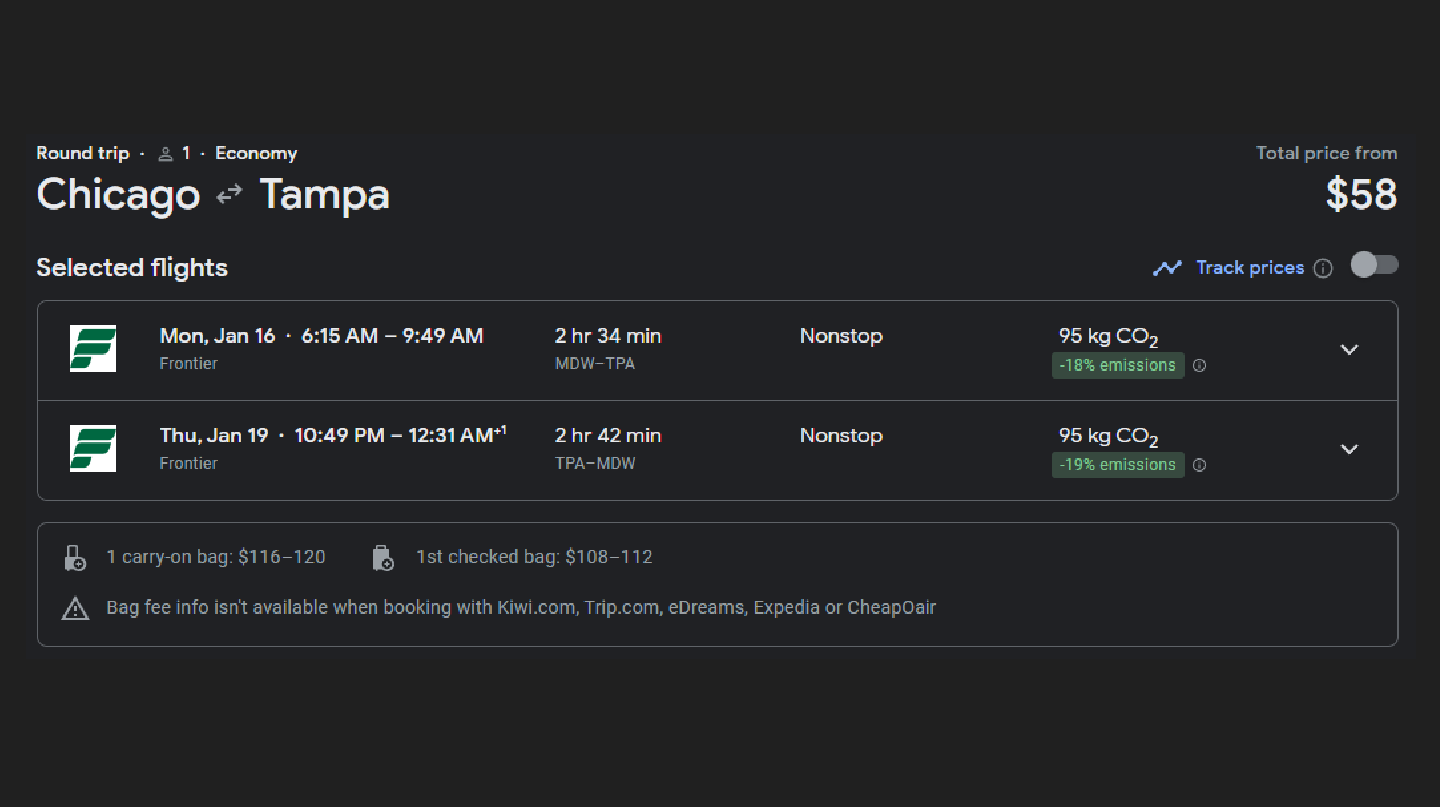 That’s not a doctored photo. We found a round trip from Chicago’s Midway International Airport to Tampa International Airport, a distance of about a thousand miles, for just $58. Yes, the flight was aboard Frontier, but the cheapskate in me couldn’t resist. That’s just $29 per flight —a new record for me! I had our Galpin travel agent book it.

For full-frontal honesty, the travel agent did pay for basically every upcharge that Frontier had to offer. They paid for priority boarding, a specific seat, a carry-on, a checked bag, and other add-ons that were unnecessary. If you’ve never flown Frontier before, yes, the airline charges you for all of that stuff. Don’t think the charges end there, either, because the airline will even charge you to drink some water on your flight. Frontier is so cheap in how it runs that its planes don’t even have WiFi. 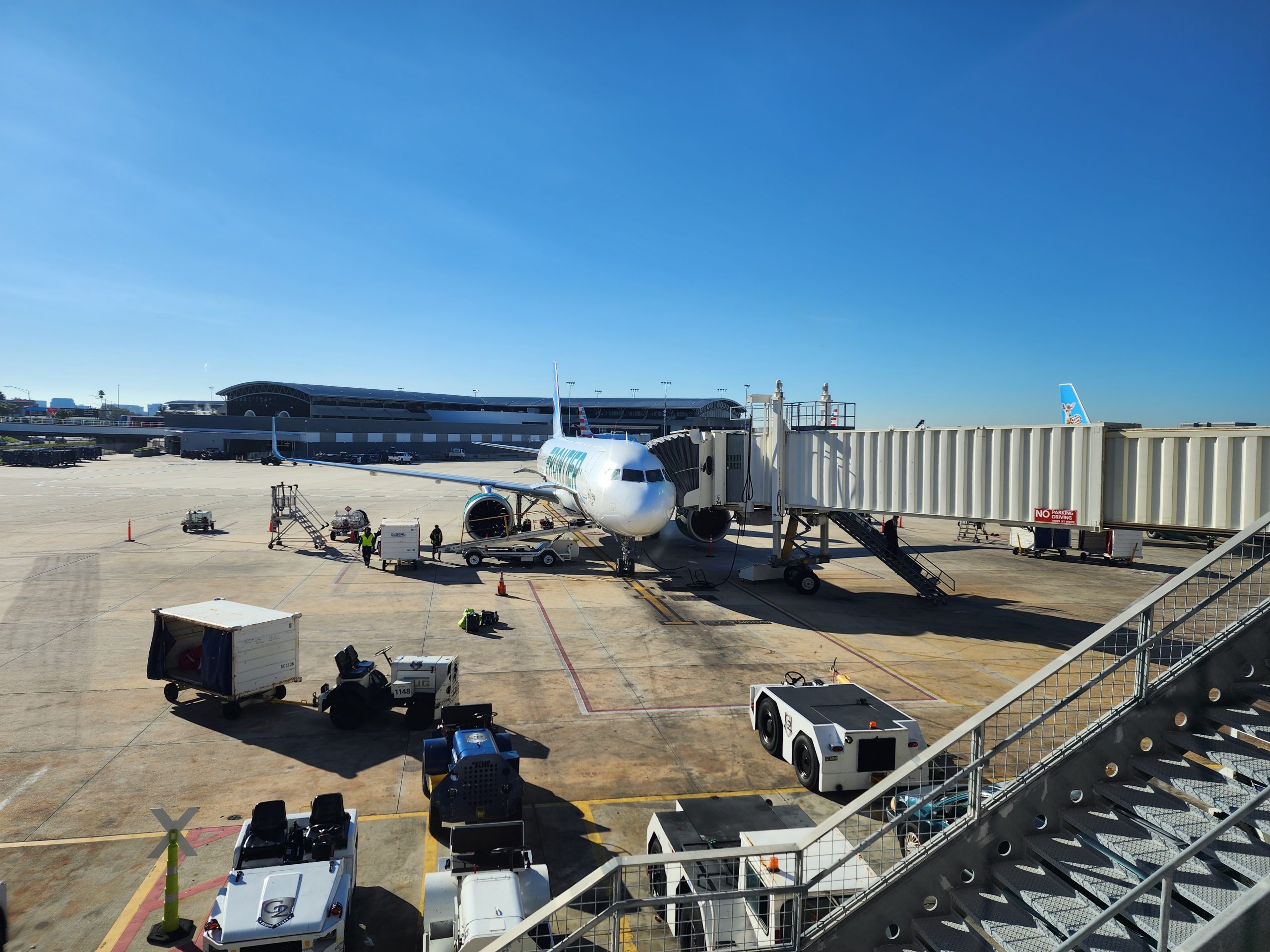 I travel really lightly. Unless I have to bring something big with me (like motorcycle gear), I pack my purse to the gills and take just that. If it can’t fit, it won’t fly. Since the Galpin people paid for the checked bag, I decided to at least use it. Amusingly, the total after the add-ons came to about $300. This was still $50 cheaper than the base fare for a round-trip on Spirit and about $120 cheaper than a round-trip on American Airlines.

These flights were both rough and also two of the best flights that I had ever taken. They were rough because I mean, did you see those departure and arrival times? I had to wake up at 3 AM to make my departure flight to Tampa, and I didn’t arrive back at Midway until nearly 1 AM last night. 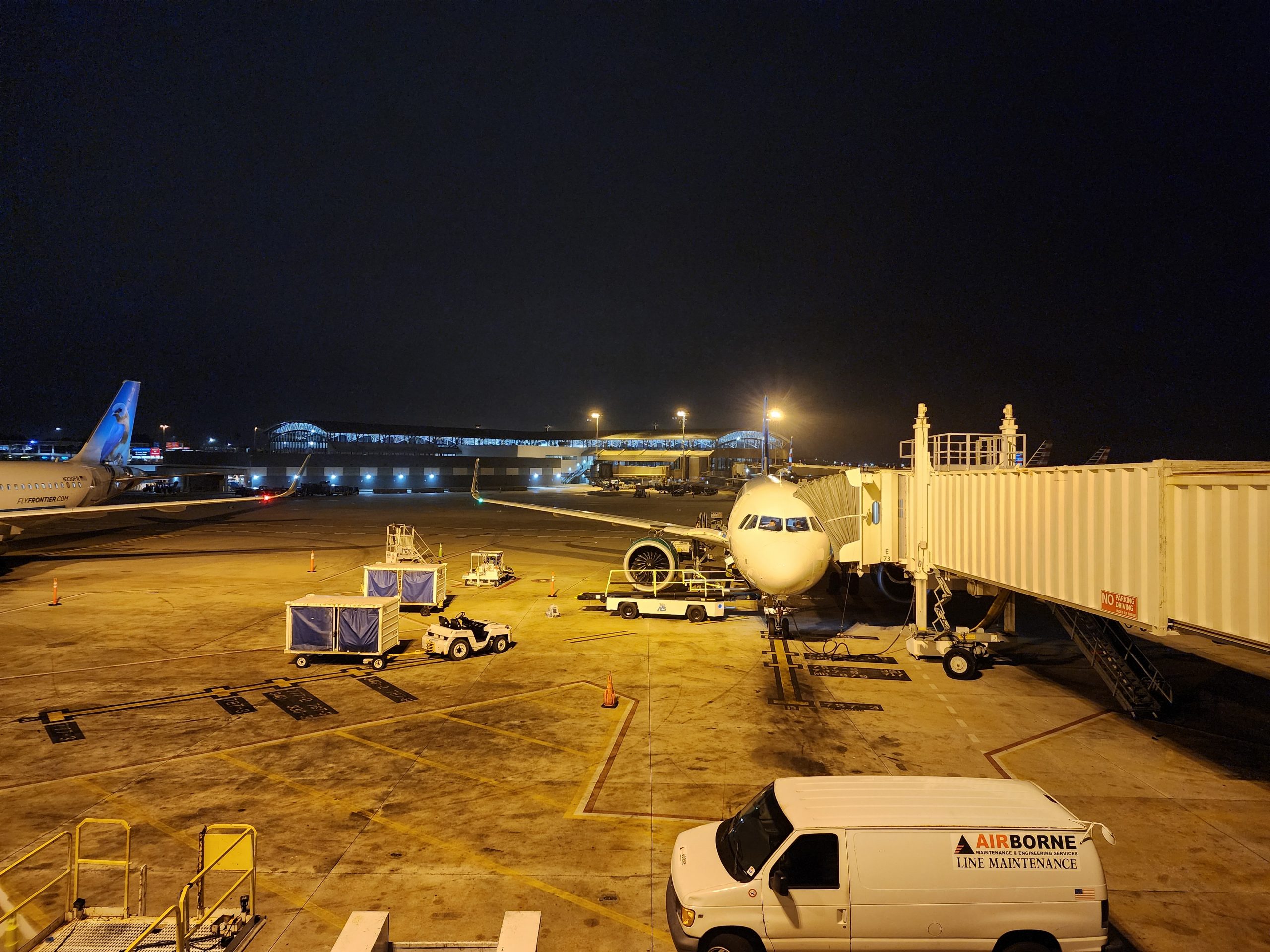 However, departing and arriving at those times also meant that the planes on both flights were ridiculously empty. The flights were so empty that most people had a row all to themselves and the only people sitting next to each other did so on purpose. Some passengers used this to their benefit by laying down and enjoying a nap. Me? I kicked back at my window seat, relaxed, and pointed all of my row’s air nozzled toward me. There were no crying kids, no smelling other people’s farts and the lack of people made the plane feel so much bigger. 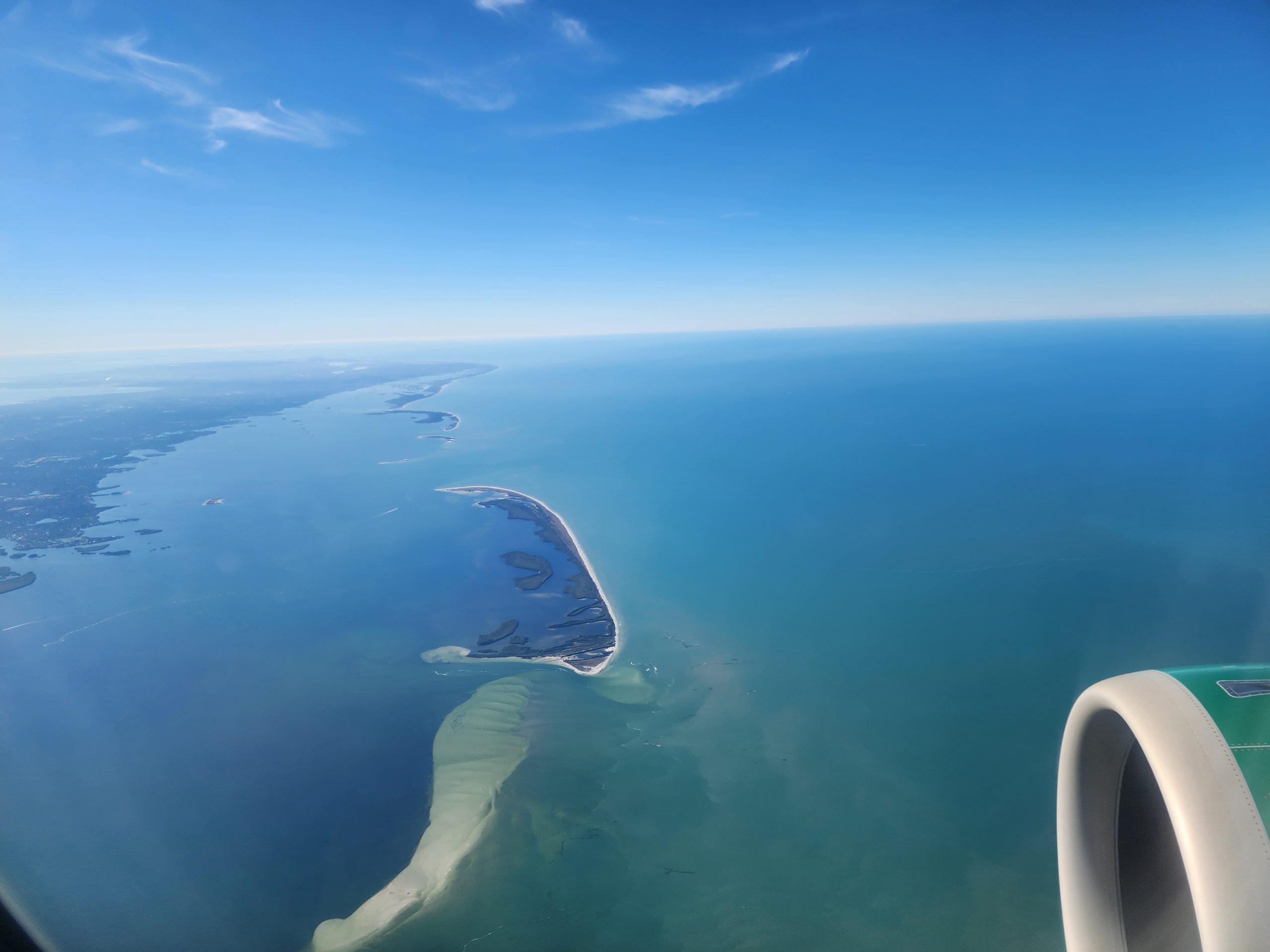 I could tell that the flight attendants were more relaxed, too. After all, they didn’t have a whole planeload of people to deal with.

Flying like this was so relaxing that I might just intentionally choose weird times from here on out. It had another benefit, too, and it’s that I got to spend more time in Florida outside of the RV show. I didn’t realize it when I first landed, but I actually had enough time to scratch off a road trip bucket list item. I’ve always wanted to drive on Florida’s Overseas Highway and the Seven Mile Bridge, both of which which were just six hours south of Tampa.

I decided against it, thinking that it would be dark by the time I got there. Later, I figured out that I actually had plenty of sunlight. Ah, maybe next time.

Since I didn’t go that far south, I decided to explore within a 100-mile radius of Tampa, and the sights will forever be imprinted in my brain. Florida’s coast is absolutely spectacular, and the state’s bridges–at least the ones I saw–are a marvel. I had to pull over just to take a picture of the Sunshine Skyway Bridge outside of St. Petersburg. 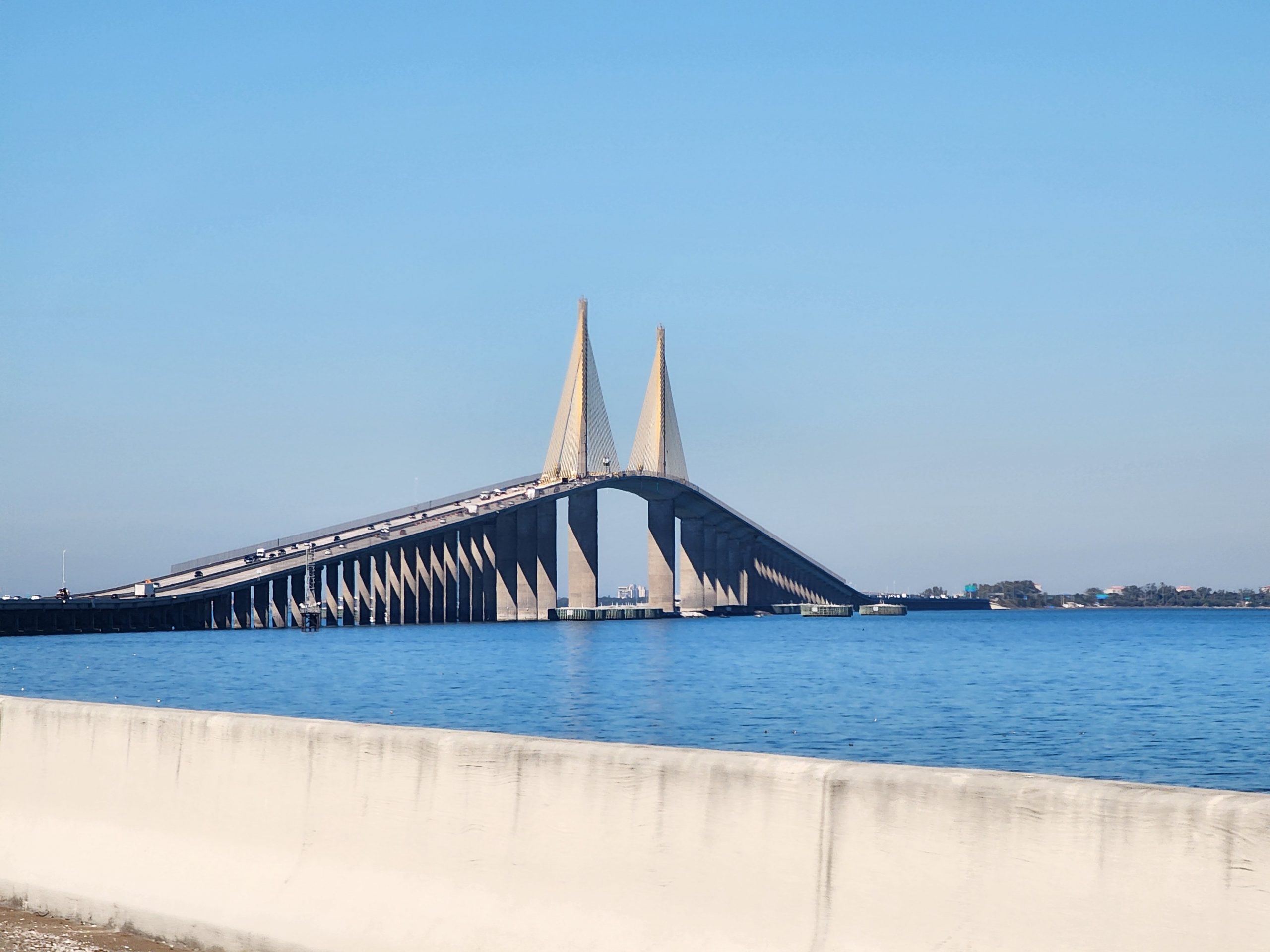 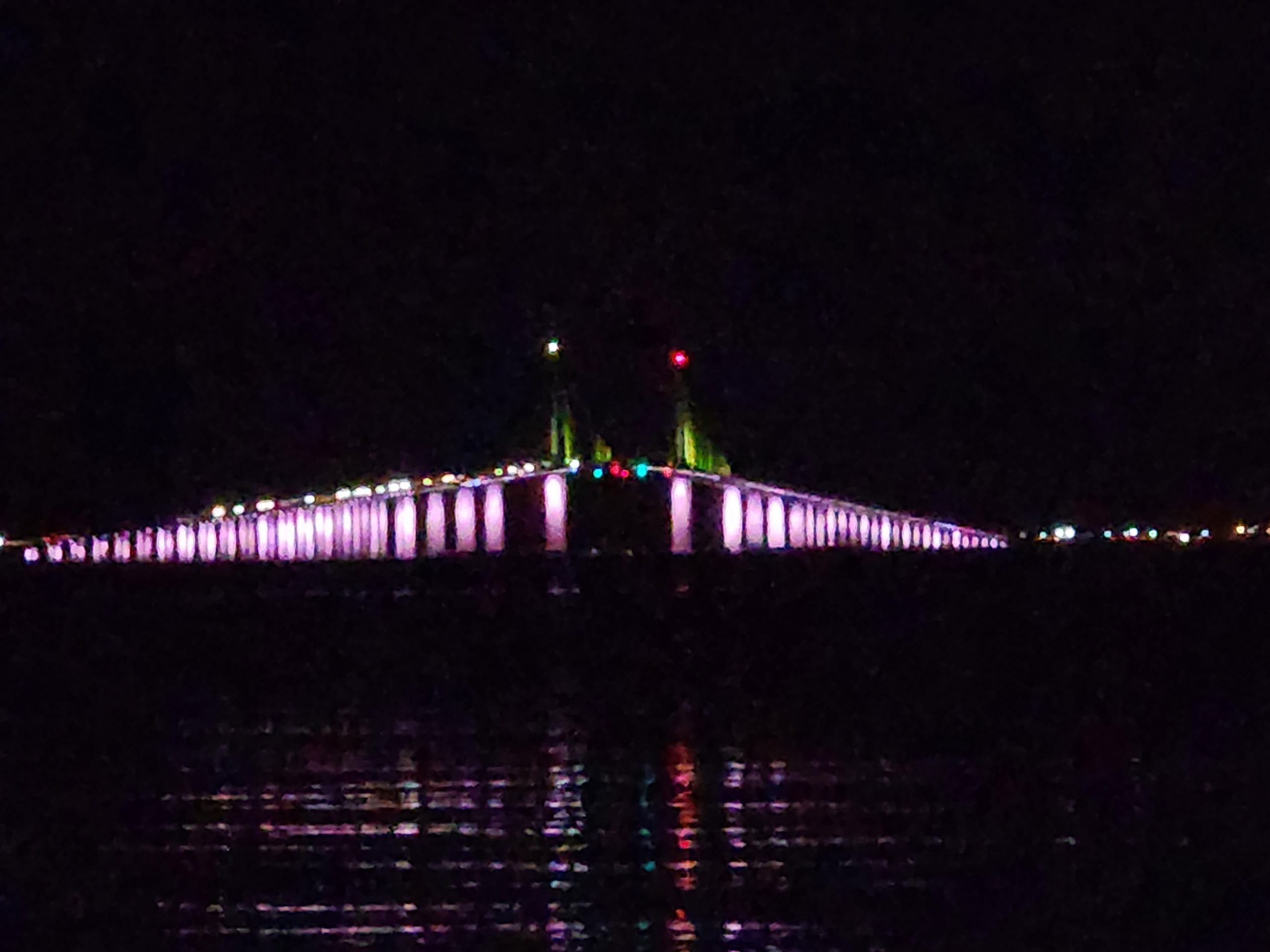 I also stopped at a beach, where I took a swim and watched the local wildlife. If you ever find yourself frayed at the ends with stress or wound up tight, just go to your nearest beach or nature preserve.

Sit there and watch the wildlife do its thing; you might find yourself experiencing relaxation that you’ve never felt before. 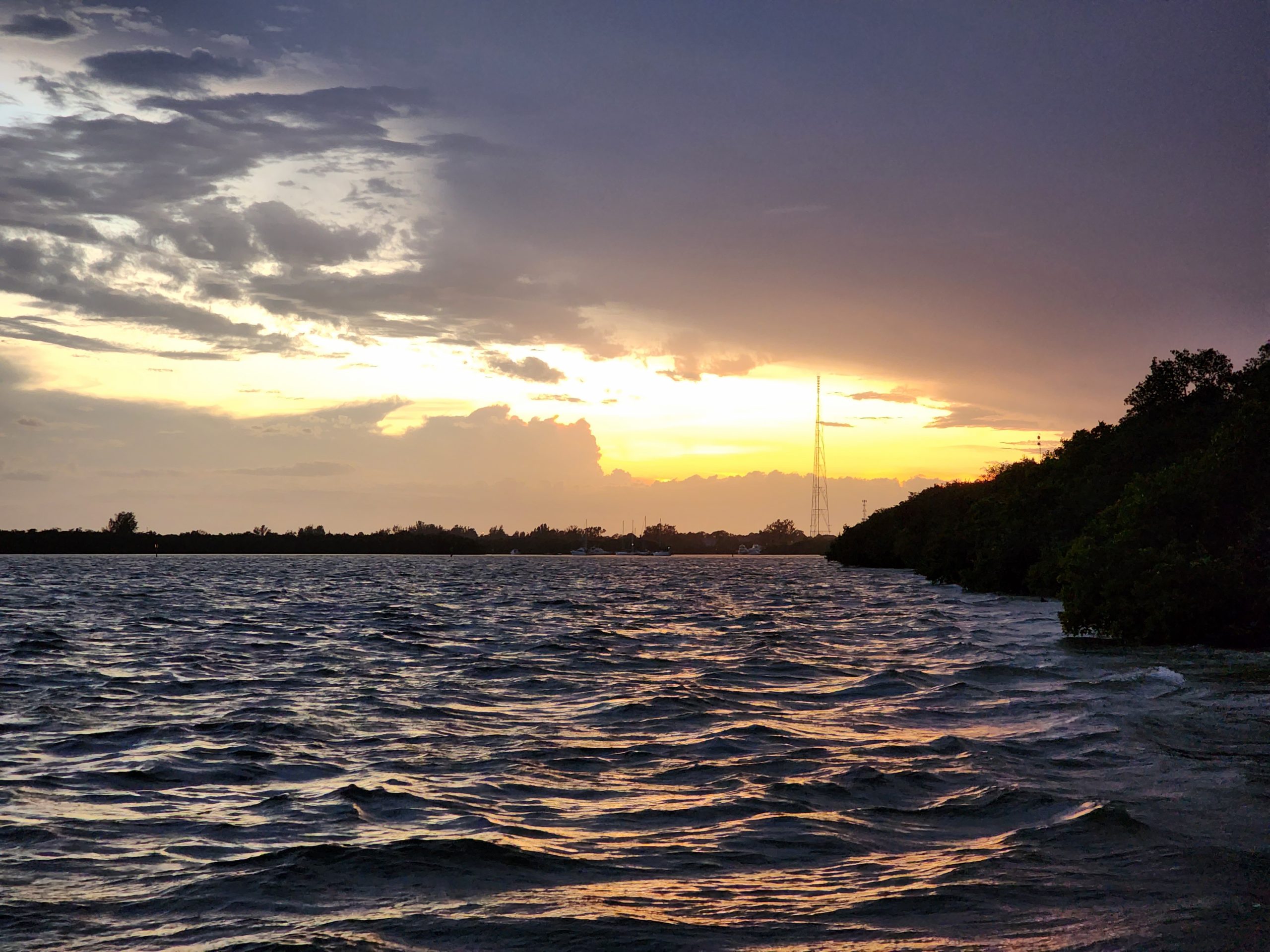 Before this trip, I had been to Florida only two other times. My first time in Florida was when I was a kid, and I don’t really remember it. The second time was back in 2014, and I was stuck traveling with now former friends. We never ventured much farther than a mile outside of Walt Disney World, so there wasn’t much exploration. This time, I was by myself and with a rental Nissan Sentra with unlimited miles on hand. 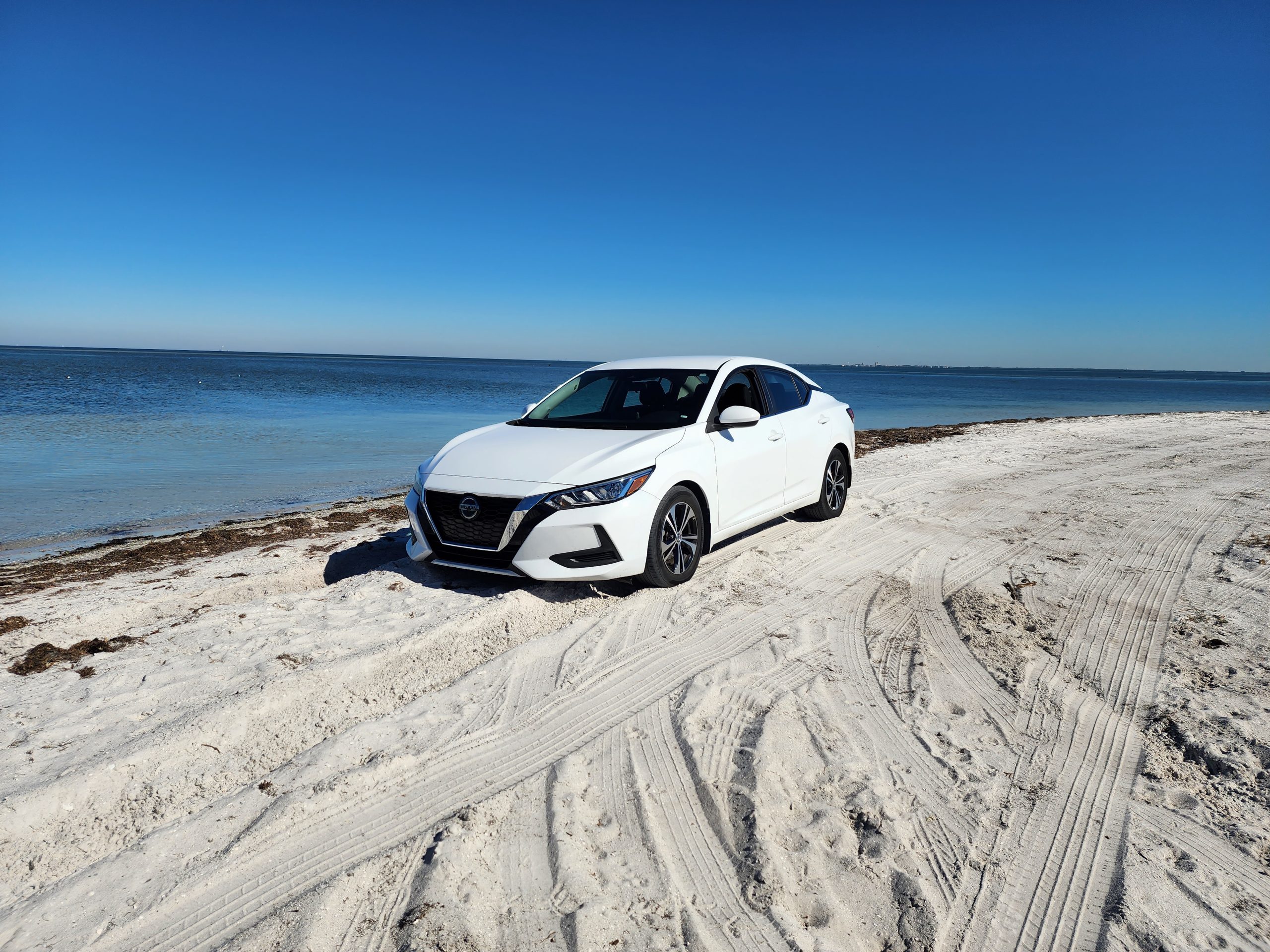 I put 420 miles on the Sentra, exploring that part of Florida, and I’ve realized why people move to this state. There’s so much to do and Florida’s gorgeous lands and waters can turn even a mundane commute into something beautiful. Sure, the only elevation changes are bridges, but it’s amazing how diverse Florida’s ecosystems can be. California is still one of my favorite places to go for a road trip, but now I have to return to Florida. I still have to see Miami, and the Everglades, and to drive on the Overseas Highway. 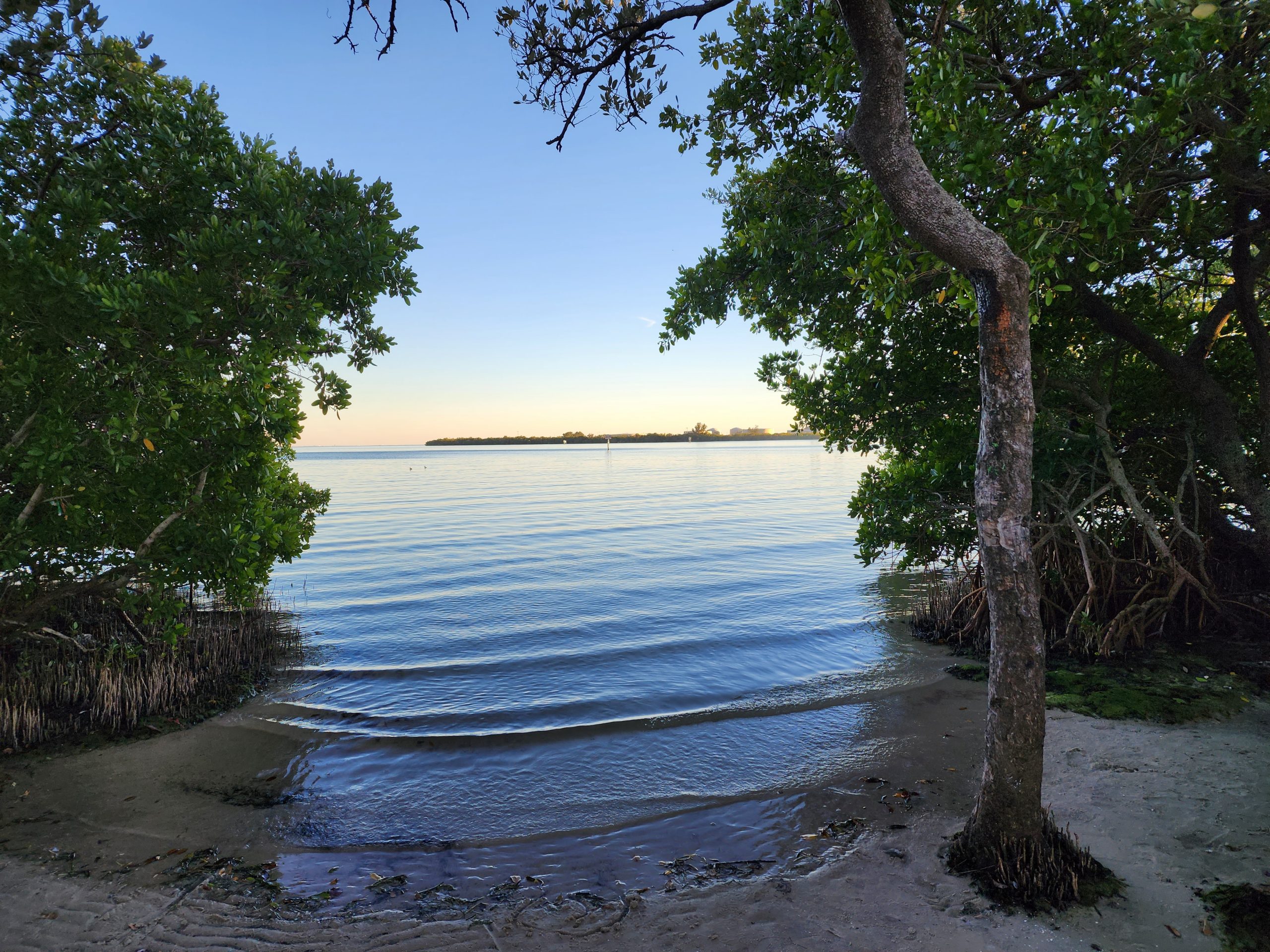 The Airbus A380 Made Its First Commercial Flights 15 Years Ago, Here’s What’s Become Of The World’s Largest Passenger Plane

Mercedes is a lifelong fan of all things powered by an engine. When she isn't driving one of her five Smart Fortwos or her 14 other vehicles she could be found in the cockpit of a Cessna 172 or perhaps swimming in any body of water that she could find. She also has a deep love for buses of all kinds. Please send her buses. mercedes@theautopian.com Instagram: @mistymotors Twitter: @Miss_Mercedes30 Facebook.com/neonspinnazz
Read All My Posts »
PrevPreviousThe Next Big Global Electric Carmaker Is… London’s Black Taxi Company?
NextThis Ingenious ‘Tire Within A Tire’ Could Save Your RV From A Violent BlowoutNext