Going to my first Florida RV SuperShow has taught me a number of interesting things about what other RV owners care about. Ease of use for people of limited mobility is a concern for some, as is the amount of labor needed to enjoy a camping experience. I also found that a lot of people care about maneuverability, too, and that’s a problem that one Italian motorhome manufacturer aims to solve. The Wingamm Oasi 540.1 is a motorhome that bridges the gap between a Class B and a Class C while maintaining a driving feel similar to that as a car.

If this motorhome looks similar to you, it’s because I actually first wrote about it back in the summer of 2021. Now, I’ve seen it, touched it, played around with it, and have some additional news for you. Back then, Wingamm announced that it was coming to America. So the company’s reps tell me, Wingamm missed its release date. Then, after American RVers tested the European version, the company decided to make changes just for the American market. Now, Wingamm expects the first campers to hit American roads this spring. I got to see the Wingamm Oasi 540.1 in person and I love a lot of the ideas here. If you’re reading this from Europe, this won’t be anything that special. For size-obsessed America, this is something very different. 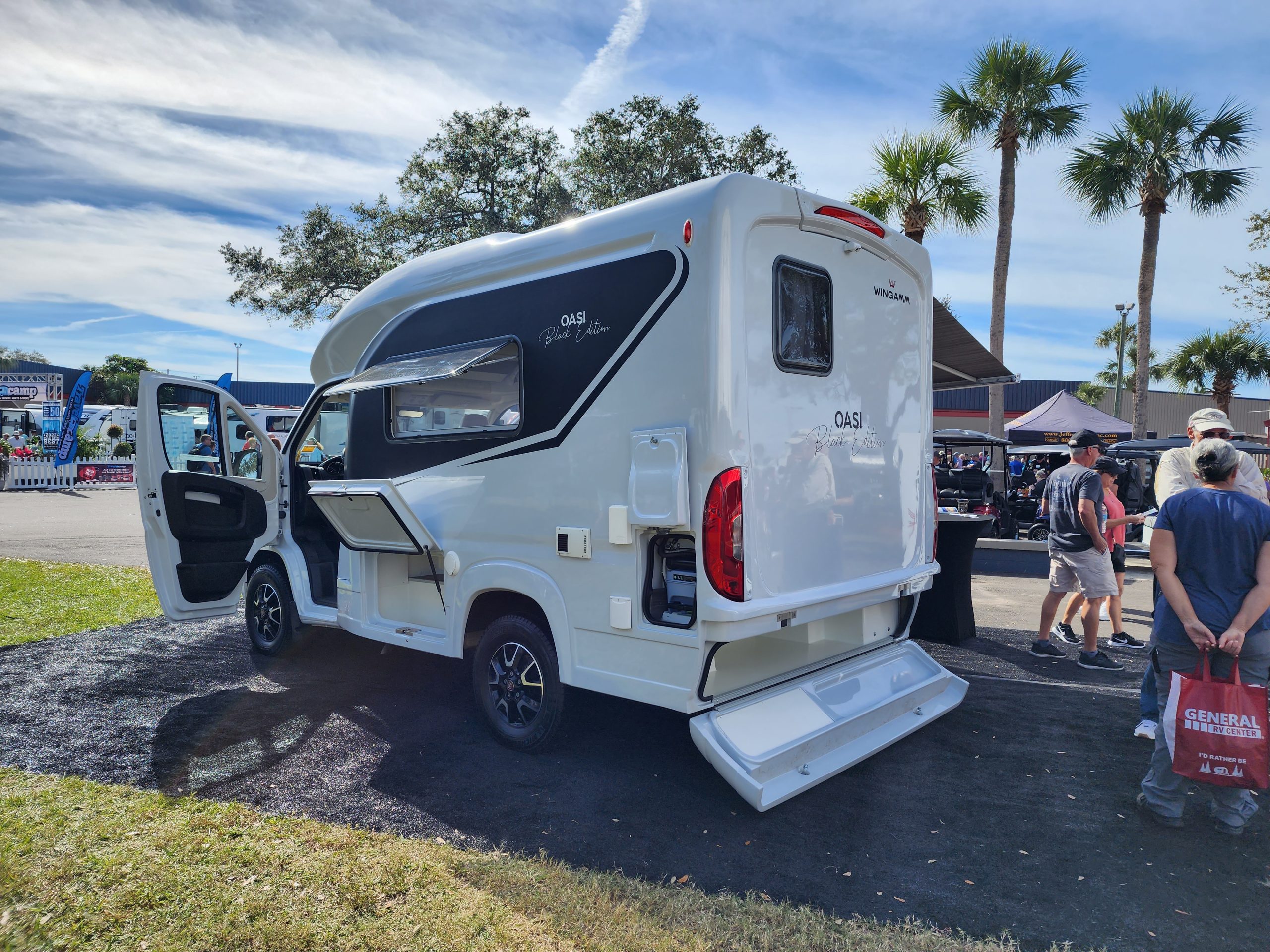 Wingamm opened its doors in Italy in 1977. Its founders, the Turri brothers, were initially builders of furniture. Eventually, the pair fell in love with RVs, and decided to use their experience in the furniture business to create their own RVs. The Turri brothers founded Wingamm, drawing inspiration from the peregrine falcon. Like the bird of prey, Wingamm sees its campers as robust, nimble vehicles capable of getting you to your destination in comfort.

Wingamm started off small, by taking vans supplied by customers, chopping off their roofs and fitting a fiberglass camper shell in their place. In 1982, the company evolved its campers into the basic design that is still used today. 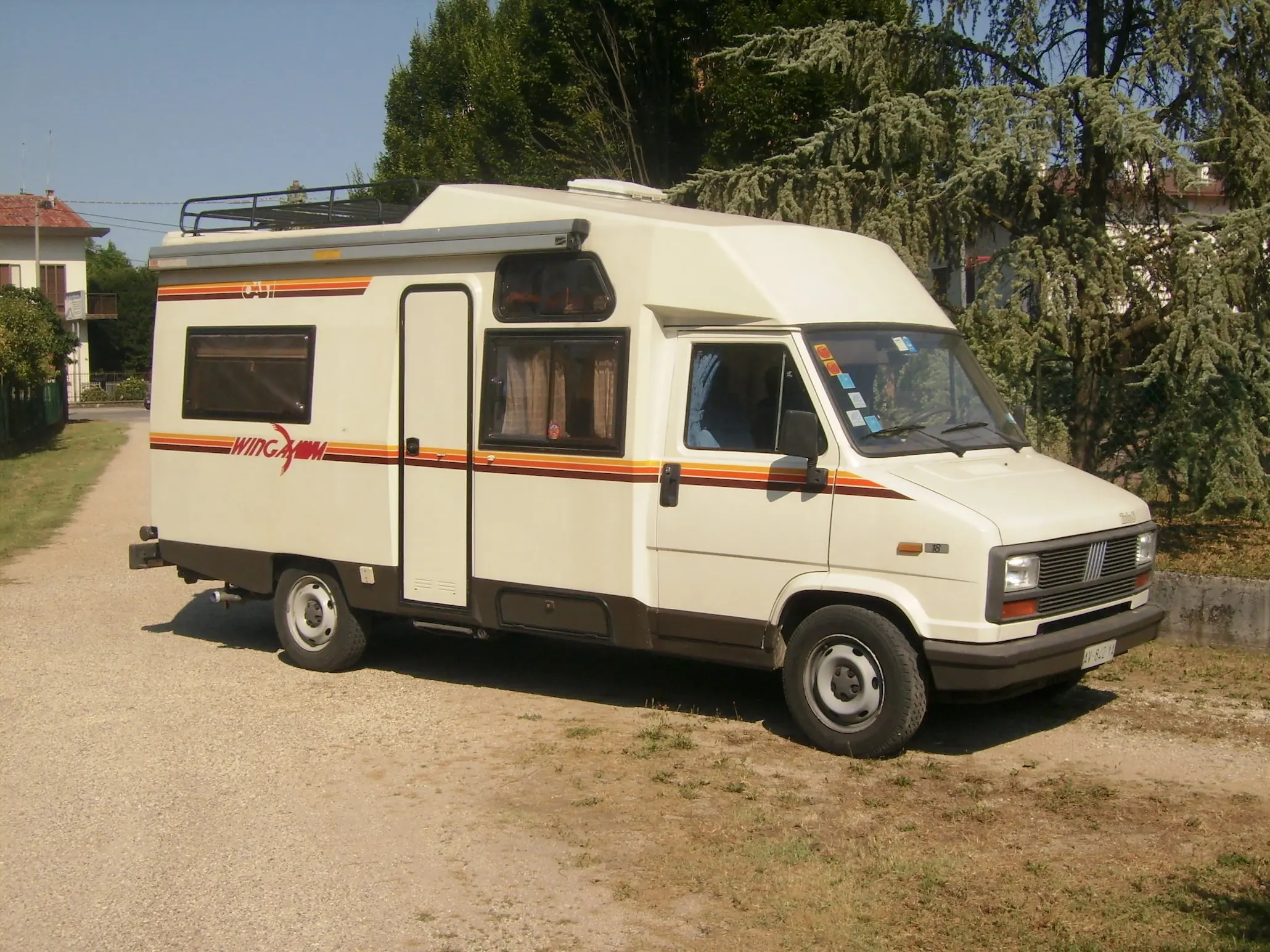 Back then, Wingamm introduced the Oasis, which started off life as a Fiat Ducato before Wingamm fitted its custom fiberglass monocoque body. The Italian RV builder also introduced its characteristic drop-down bed that offers ample space by day, and a comfy bed at night. Since then, the company has only evolved its concept into rounder, more luxurious motorhomes; all of them built with a fiberglass body. The camper that we’re talking about today, the Oasi 540, first hit the road in 2010. 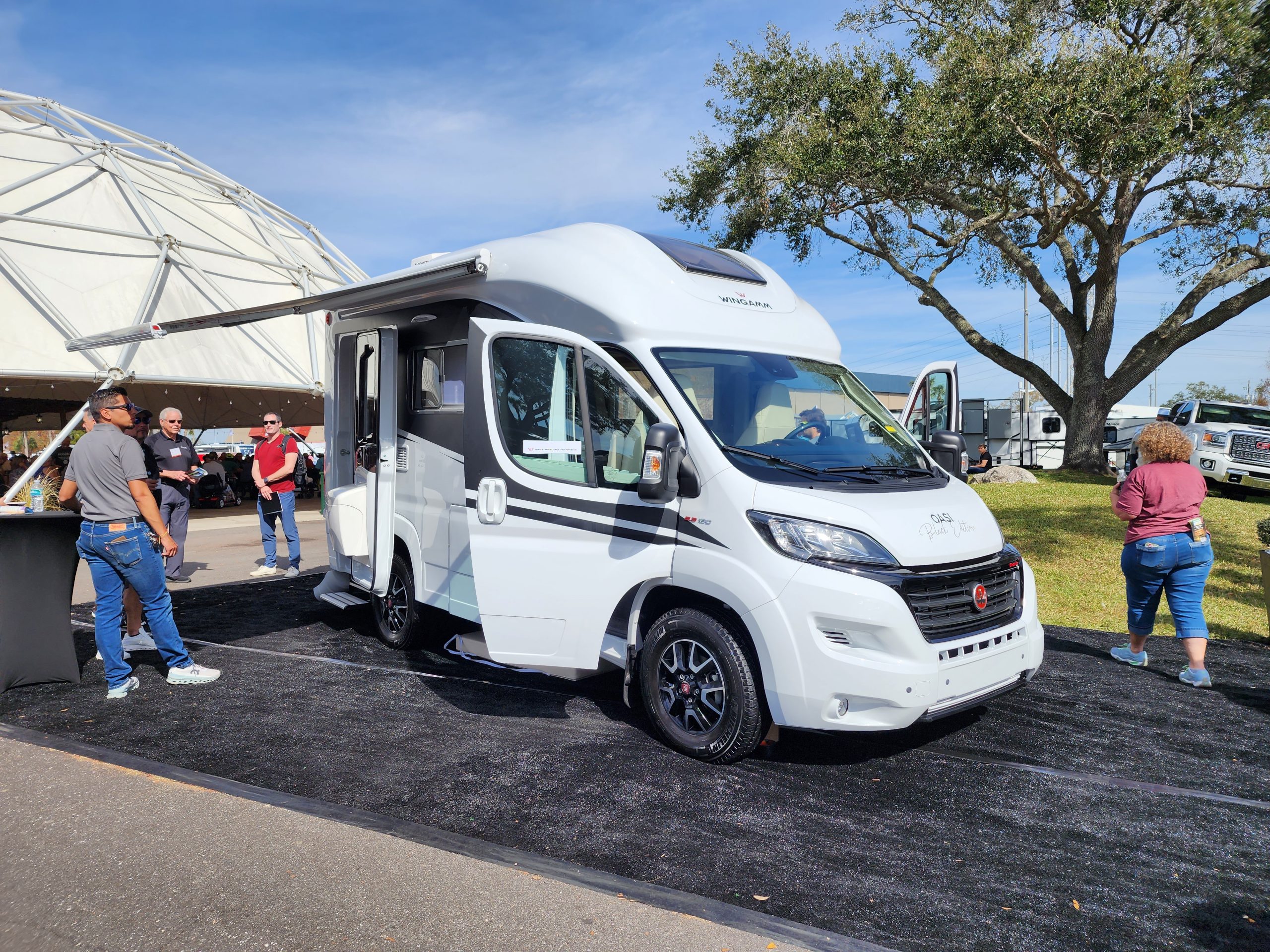 Wingamm brought an Oasi 540 to the 2023 Florida RV SuperShow. This little guy is based on the Italian market Fiat Ducato and comes equipped as it would in Italy. In America, we know the Ducato as the Ram ProMaster. The Ducato found underneath this camper could technically be considered a Holy Grail. The ProMaster was sold in America with a 3.0-liter Iveco F1C diesel four. This one has a 2.3-liter Iveco F1A diesel four. Both engines are rated at 175 HP. When Wingamm releases the U.S. version, it’ll come with the 3.6-liter gasoline V6 making 276 HP. Wingamm’s people tell me that this European model was imported for display only and can never be registered here.

On the outside, the advantages of this camper are immediately apparent. 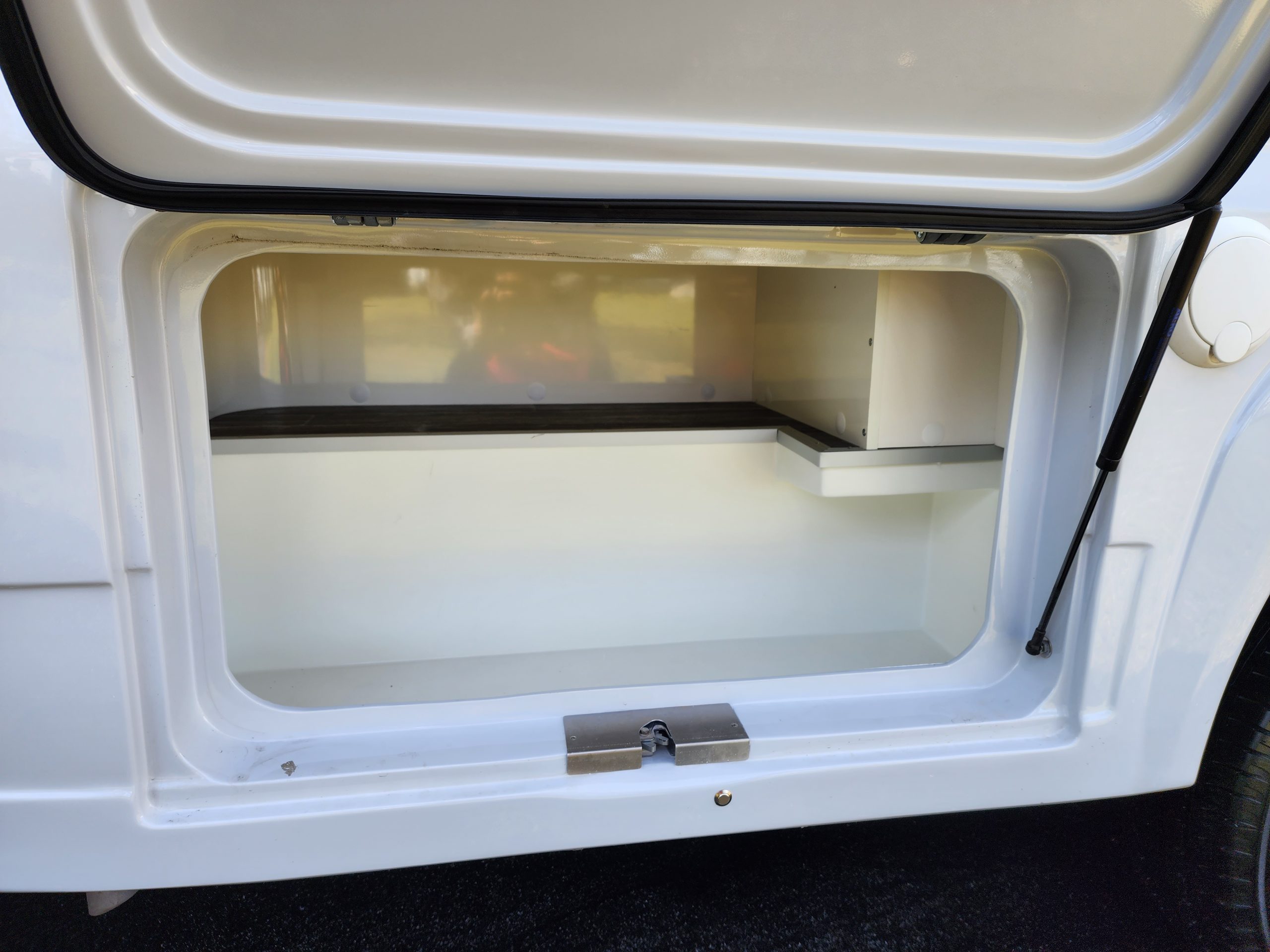 First, you’ll notice just how tiny it is. Wingamm is marketing it as a Class C. However, at 17 feet, 6 inches wide, it’s as short as something like a Winnebago Solis Pocket. It’s shorter than many of the Mercedes-Benz Sprinter conversions and it’s even shorter than a regular cab, long bed pickup. And unlike the aforementioned Winnebago, this has a lot more features and doesn’t feel nearly as cramped.

Dare I say? This camper feels like a TARDIS inside. More on that in a bit. 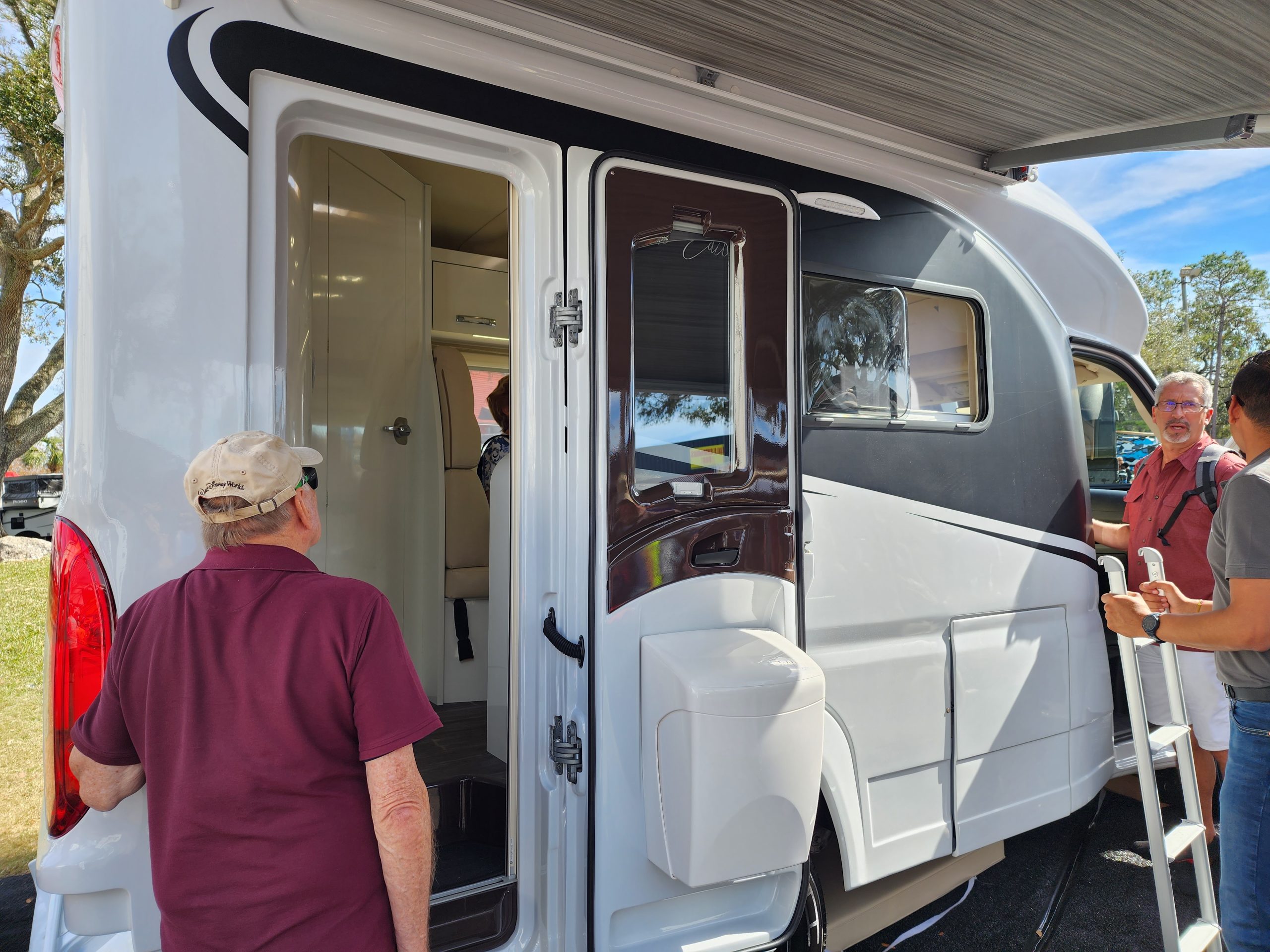 Other advantages come in how it’s built. Wingamm builds its campers using a single thick piece of molded fiberglass. The company touts style and longevity with this choice. Since it’s a single piece of fiberglass, you don’t have to worry about roof leaks and the company says that its campers can last the long haul. Of course, my own U-Haul camper is a testament to the durability of fiberglass.

In addition to the sweet looks and durability, Wingamm’s fiberglass build hides tons of spacious storage compartments all over the camper. There’s a sizeable hatch on the left side, a huge “basement” in the rear, and a spot for propane tanks on the right. 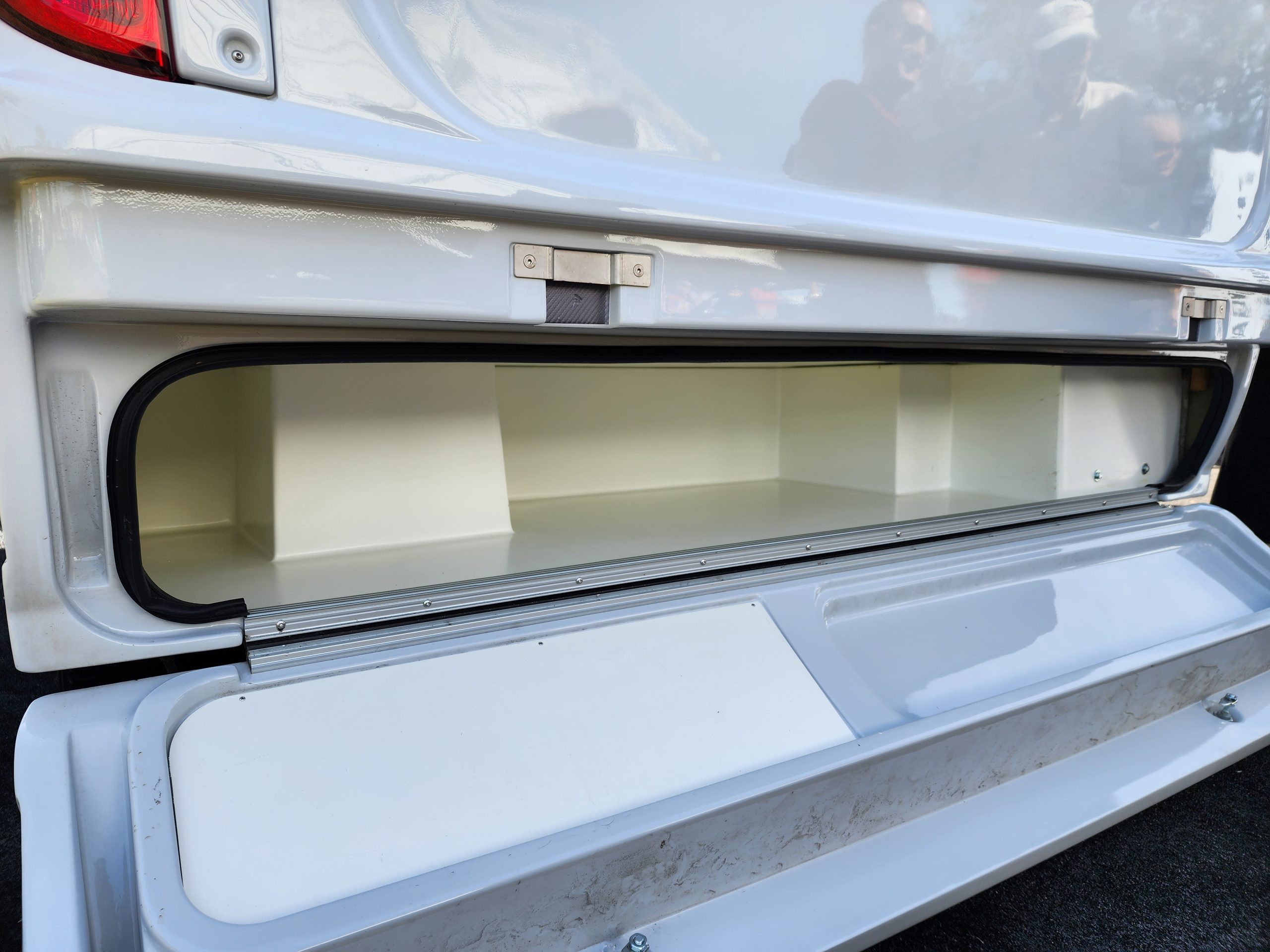 This camper was getting tons of attention at the show, so I decided to ask the motorhome owners what drew them to it. For many of them, the appeal was the tiny size. Even though you can buy a camper with all kinds of cameras, a lot of RV owners don’t just like driving their big rigs all over the place. Thus, something that’s shorter than some pickup trucks but not as cramped as a van is really appealing.

Others saw fiberglass as a great way to lower maintenance costs. A number of the people commented that they’re either not fans of maintaining their camper roofs or not fans of paying someone to do it. Fiberglass would make that a lot easier.

However, two people found what they thought was a big problem with the Oasi 540 and it was with the RV’s waste tank. 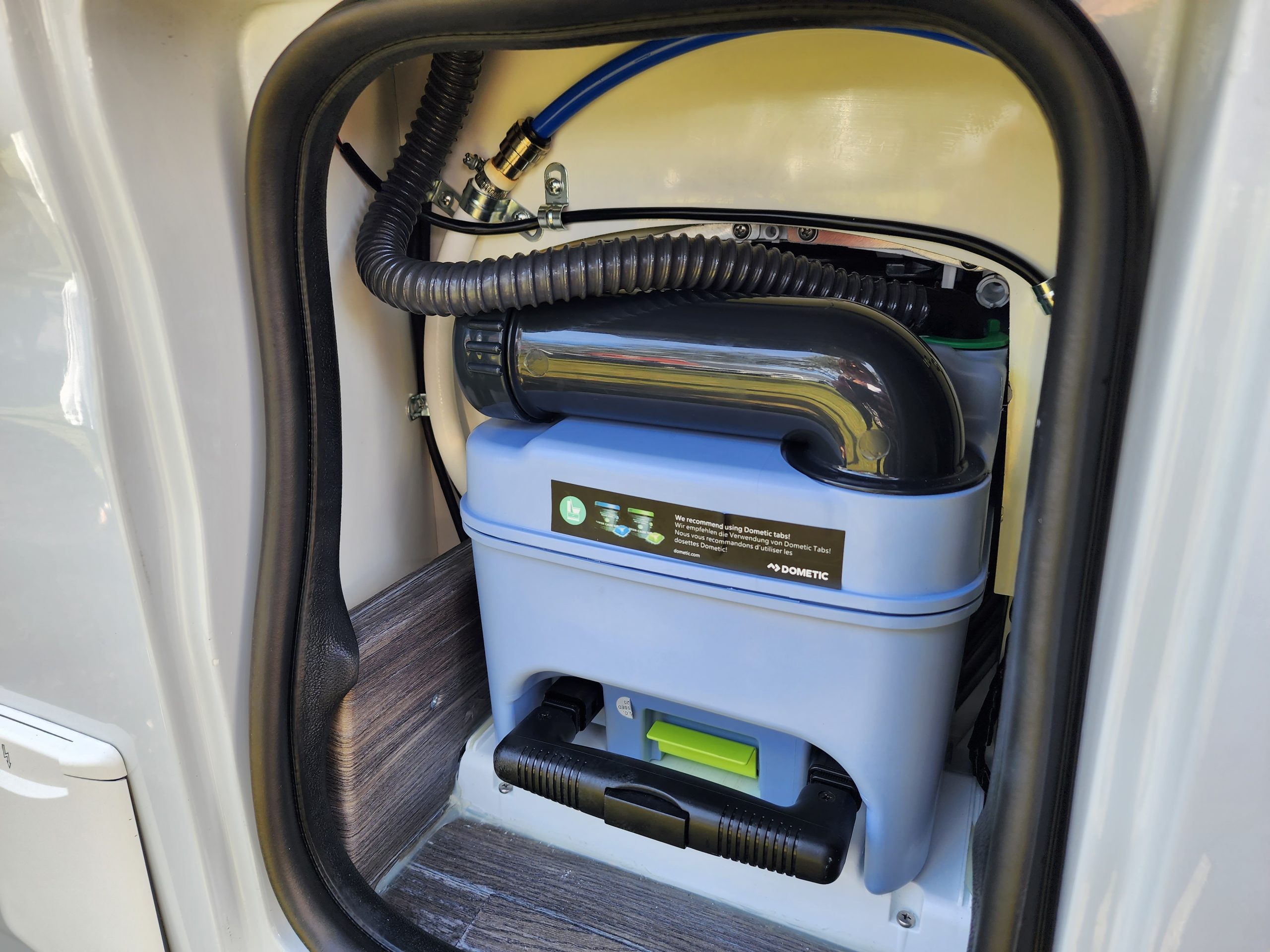 This camper has a shower and a toilet, but that toilet dumps into this tiny five-gallon tank. The RV owners that I spoke with hated that. They explained that when that little five-gallon tank fills up, someone’s gotta haul it to the dump site. A whole five gallons doesn’t seem like much, but the motorhome owners told me that means lugging 40 pounds of waste to the dump site, more if that waste has any heavy solid material in it. For these elderly RV owners, they felt that this was perhaps just enough weight to pull something.

Further, given the huge amount of space for storage, they were confused about why Wingamm didn’t use some of it for a more traditional waste tank. One motorhome owner showed me how they would cut a hole into the fiberglass and feed the waste into a larger tank that could be dumped with a hose like most RVs. After she showed me her idea, my mind was solidly blown. It’s actually pretty brilliant! 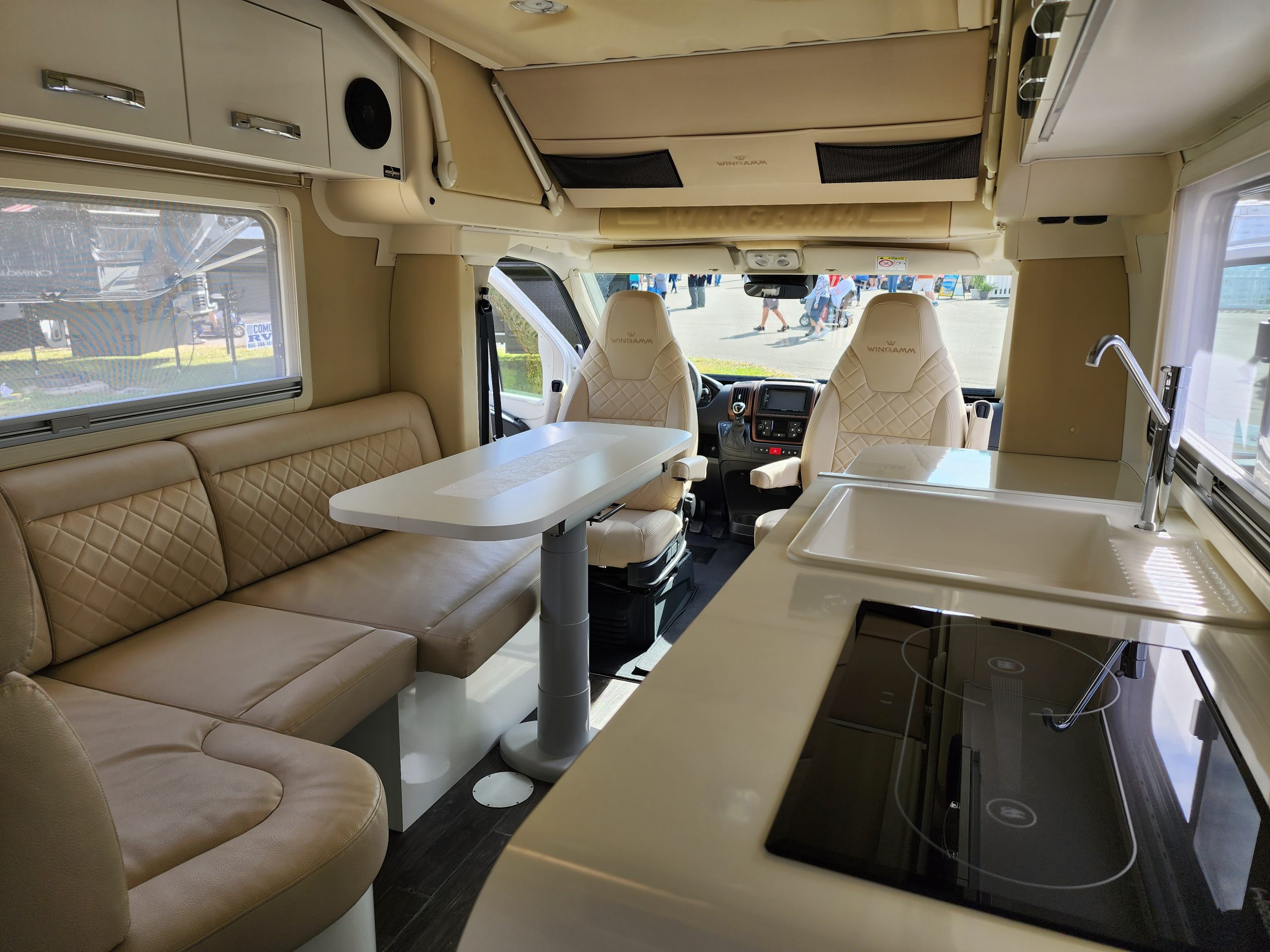 My favorite part about this camper is its interior. Now, as I said, this is shorter than the big Sprinter-based campers that you see out there. Yet, it feels surprisingly roomy inside. I hopped in and sat down without walking sideways or squeezing through spaces like I would in a regular camper van. Mind you, I’m not a small person by any means.

A big part of the magic here is how Wingamm handles bedding. See, you’ll notice that this interior doesn’t appear to have a bed. That’s because the bed is hinged and comes down from the ceiling. 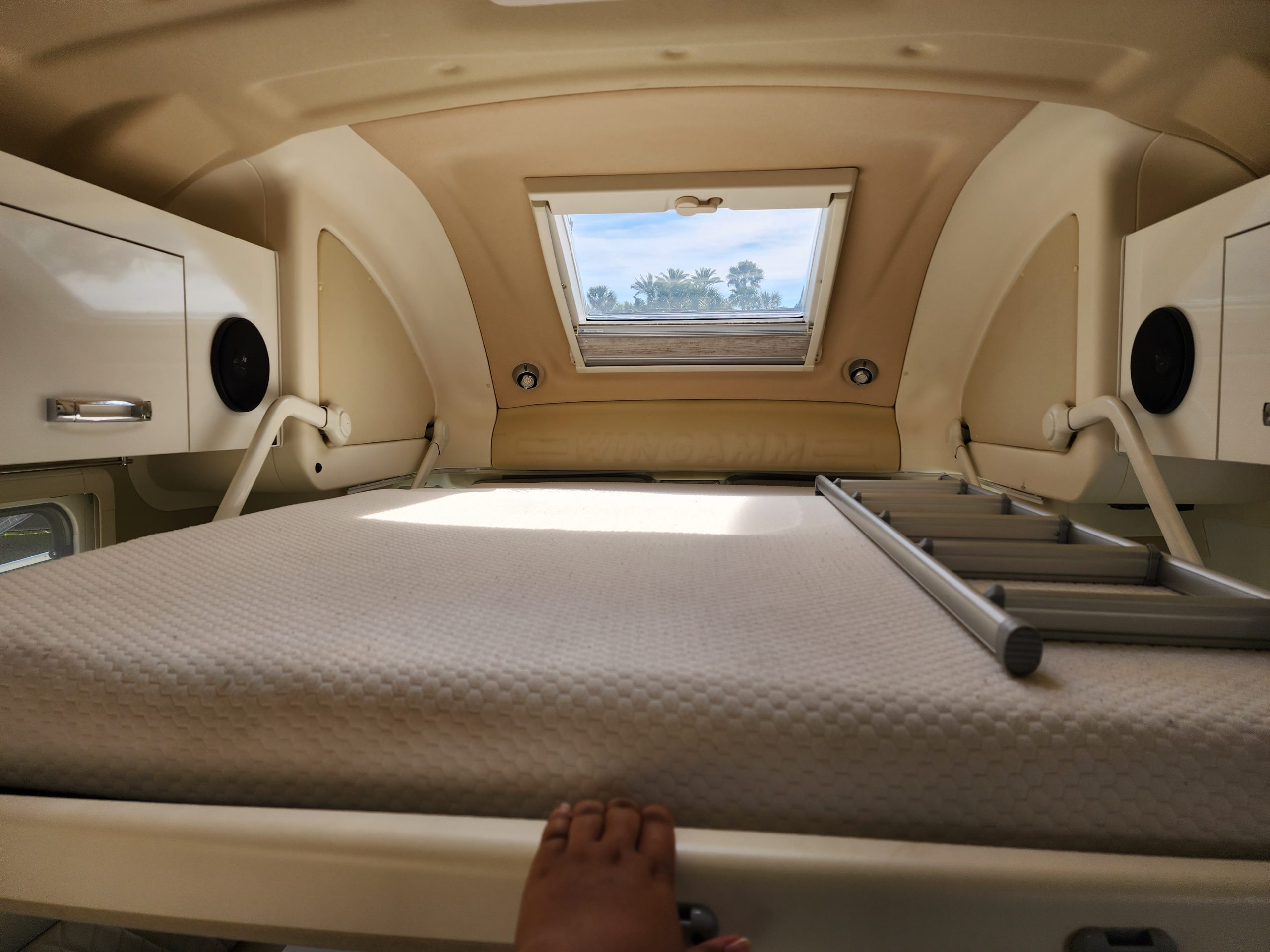 Wingamm’s bed allows you to have ample space during the day, and a nice bed to sleep in at night. This bed and its 770-pound payload are good enough for two, and two more people can sleep on the couches below. I see this camper being pretty comfy for three adults, and it would be fantastic for a couple.

The interior quality is also very good. Everything feels like the designers knew that you’d be touching it. Sometimes when I feel up an RV I get shocked at how bad certain surfaces feel. That’s not the case here. 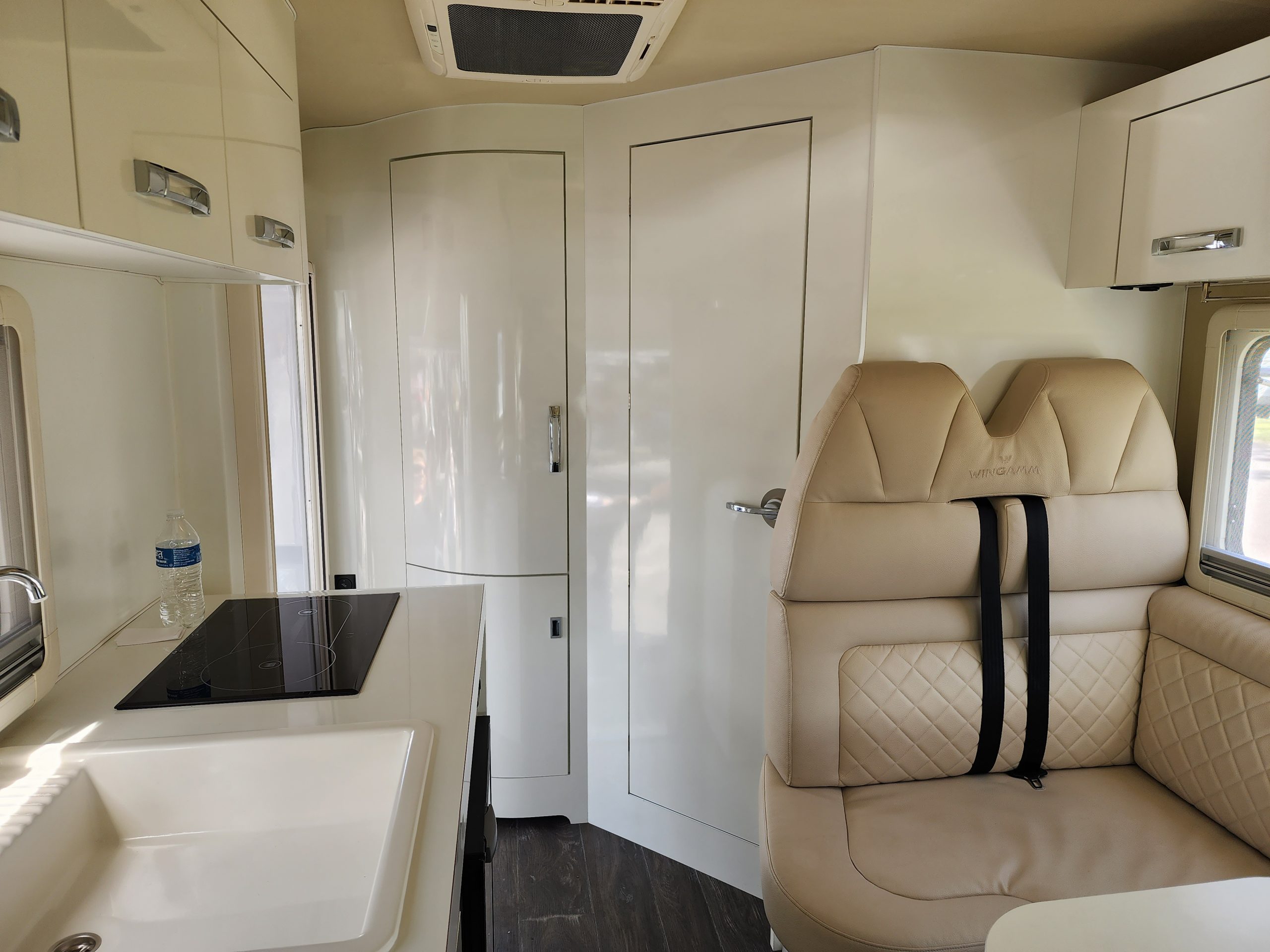 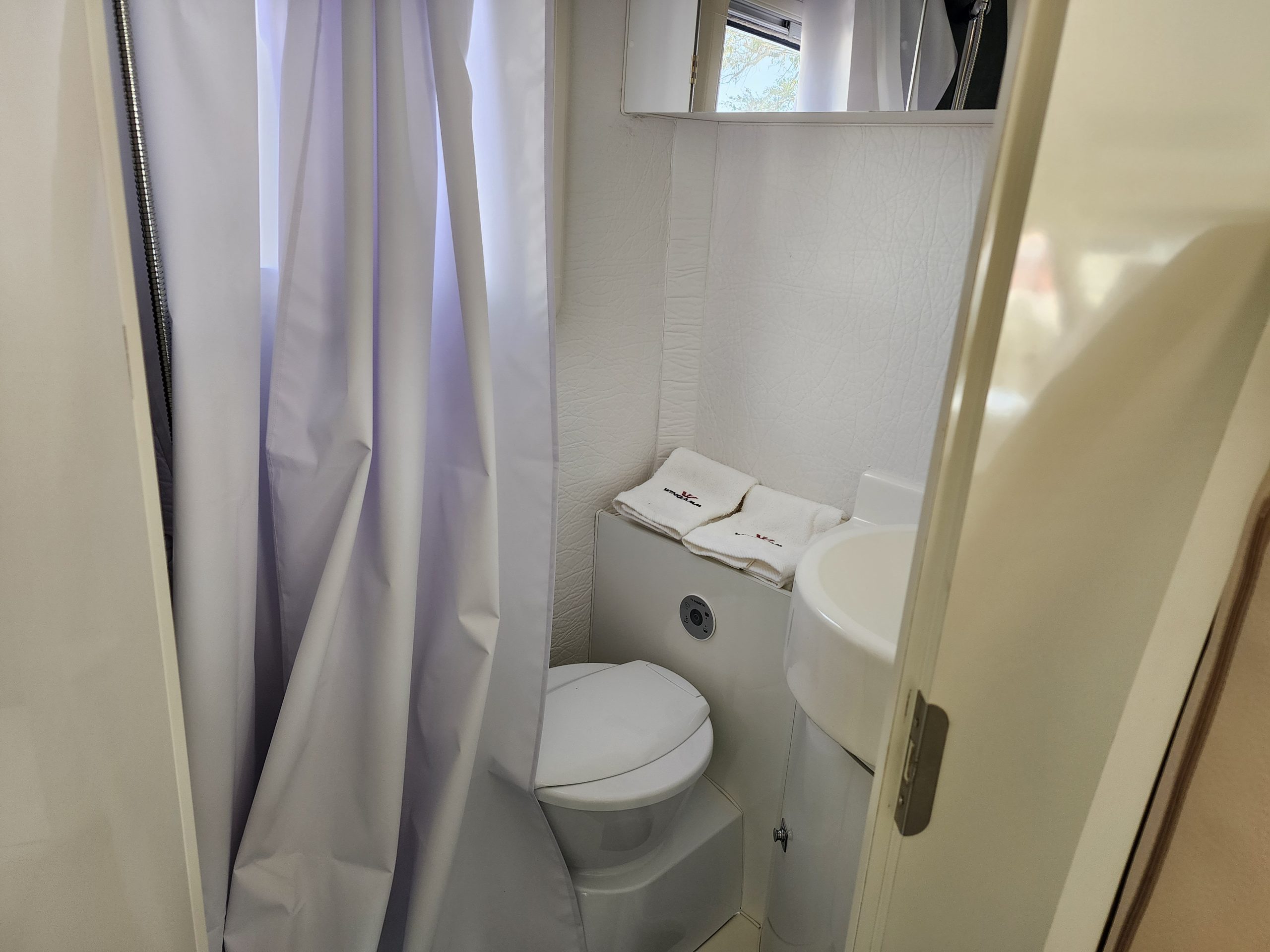 Everything feels like it belongs. Heck, those seats are better than some home furniture I’ve sat on. Of course, the camper also comes with everything you need for a comfortable journey. Insulation comes from expanded polyurethane PU and heating is handled both by a traditional heating system and a radiant floor heater. At this time, fresh water capacity is unpublished, but the European version holds 26 gallons.

The American version, dubbed the Oasi 540.1, will take feedback from potential owners and improve the camper. The 540.1 will feature a redesigned entry stair as well as grab handles next to the entry door.

What It’ll Cost You 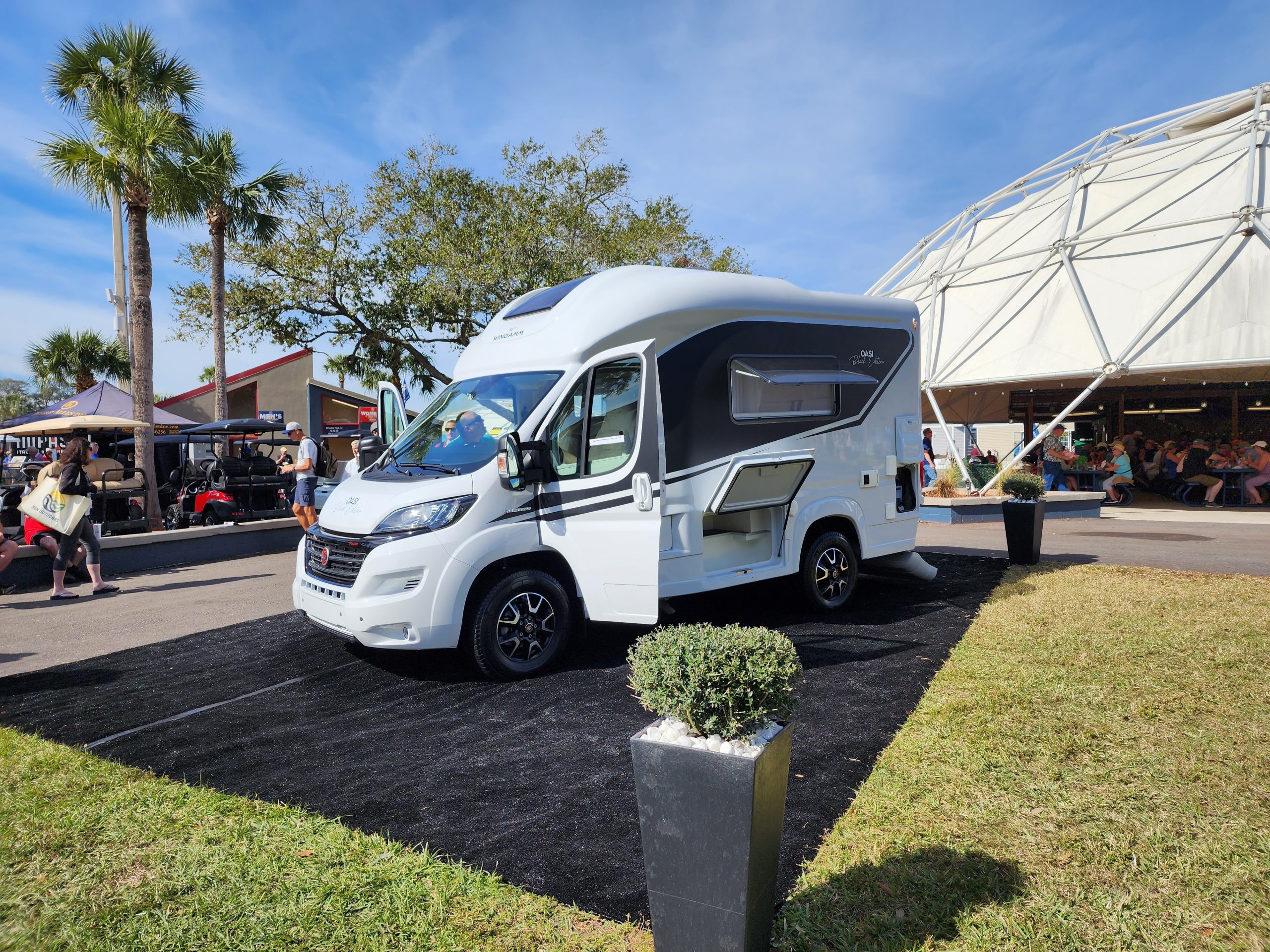 Now that I have you hooked on all of the good stuff, I do have some potentially bad news. This lovely rig is set to cost $145,000 before shipping. If you think of this as a big camper van, it’s really competitive. For example, the Wingamm 540.1 is priced at about $10,000 more expensive than an Airstream Rangeline, which is also based on the ProMaster, but you get far more room in this than you do in the Airstream. You get far more features, too. The Wingamm Oasi 540.1 is even roomier than a Winnebago Solis 59PX, which comes in at a higher price.

This is to say that given how RVs are currently priced right now, I think Wingamm has a good entry on its hands. Wingamm tells me that if you want one, you should put down your $1,000 reservation right now. The company expects to start shipping in the spring, but there’s enough demand that it expects the waitlist to stretch into 2024 soon.

Mercedes is a lifelong fan of all things powered by an engine. When she isn't driving one of her five Smart Fortwos or her 14 other vehicles she could be found in the cockpit of a Cessna 172 or perhaps swimming in any body of water that she could find. She also has a deep love for buses of all kinds. Please send her buses. mercedes@theautopian.com Instagram: @mistymotors Twitter: @Miss_Mercedes30 Facebook.com/neonspinnazz
Read All My Posts »
PrevPreviousTesla’s Faked 2016 Autopilot Video Was The Start Of Where Things Went Wrong
NextIt’s Wrenching Wednesday! Autopian Members: Let’s Talk About Your Car Projects And Problems (And I Have Plenty!)Next