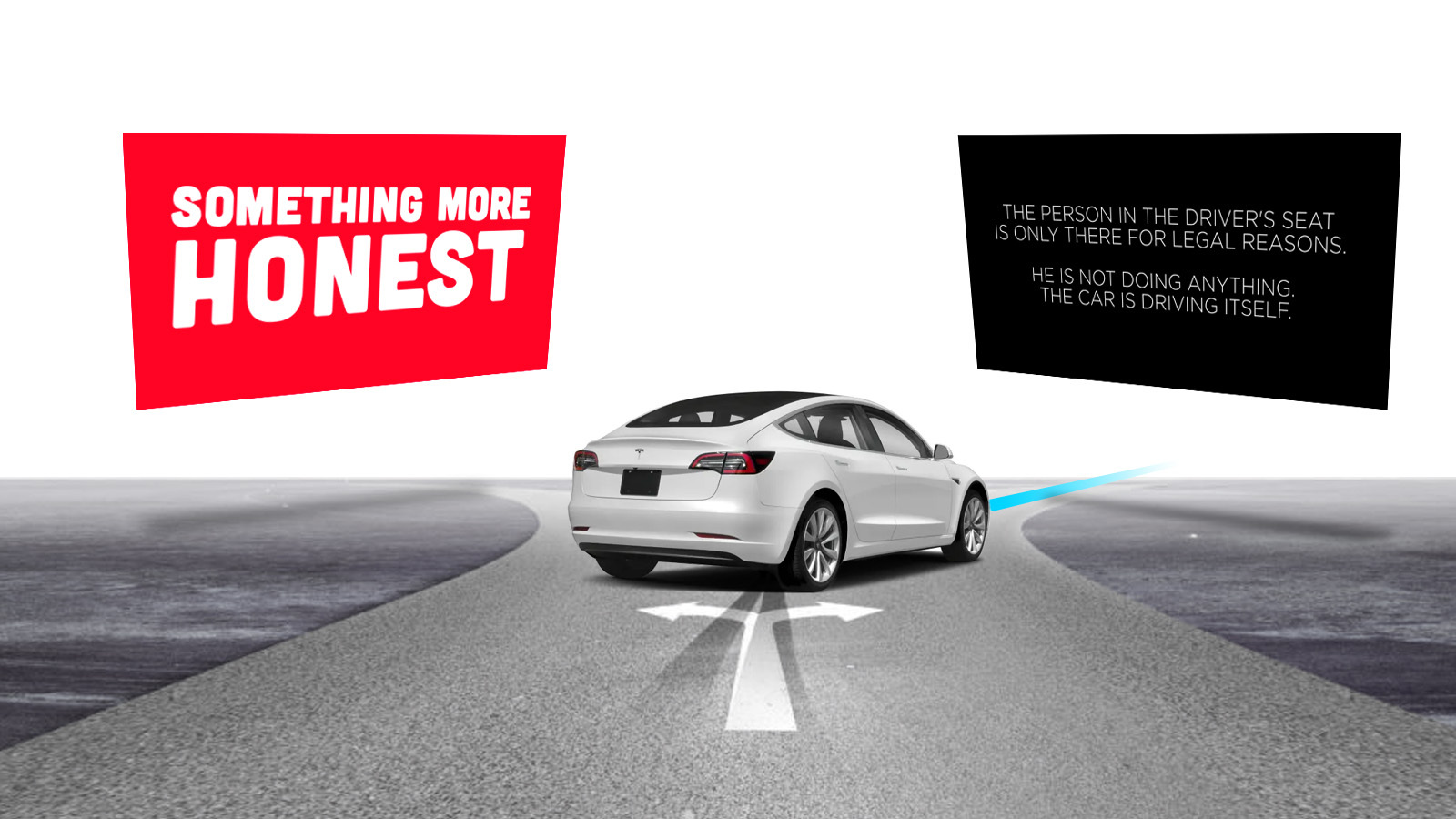 I was a little surprised to see all the attention around an admission in court from Tesla’s Head of Autopilot Software, Ashok Elluswamy, that a 2016 video used on Tesla’s website to promote Autopilot was faked. It’s been long known that this video was edited to remove a part where the car hit a roadside barrier, and that the whole route was pre-planned and pre-mapped, contrary to what is suggested by the video. This has been known since at least 2021, when I wrote about it. I suppose what’s different now is how it’s being openly admitted under oath, and used in a shareholder lawsuit over Elon Musk’s plan to take the company private a few years ago.

The testimony also brings up other uncomfortable realities about the Autopilot program, but I think what’s not being discussed enough is how this 2016 video really defined the path that Autopilot (and later, the so-called Full Self-Driving) would take, and how that path seems to be proving to be the wrong one.

If you haven’t seen the video, you’re not really missing all that much. It’s primarily a driver’s seat view (with cuts to other camera views) of a Model S making a drive, with some sections sped up so the whole trip could fit into the 3:45 duration of the video. The Rolling Stones’ Paint It Black plays in the background, and eventually, the Tesla parks itself at Tesla’s offices all by itself. It’s impressive looking, no question! But I think the most significant part of the video is at the beginning when this text is displayed: 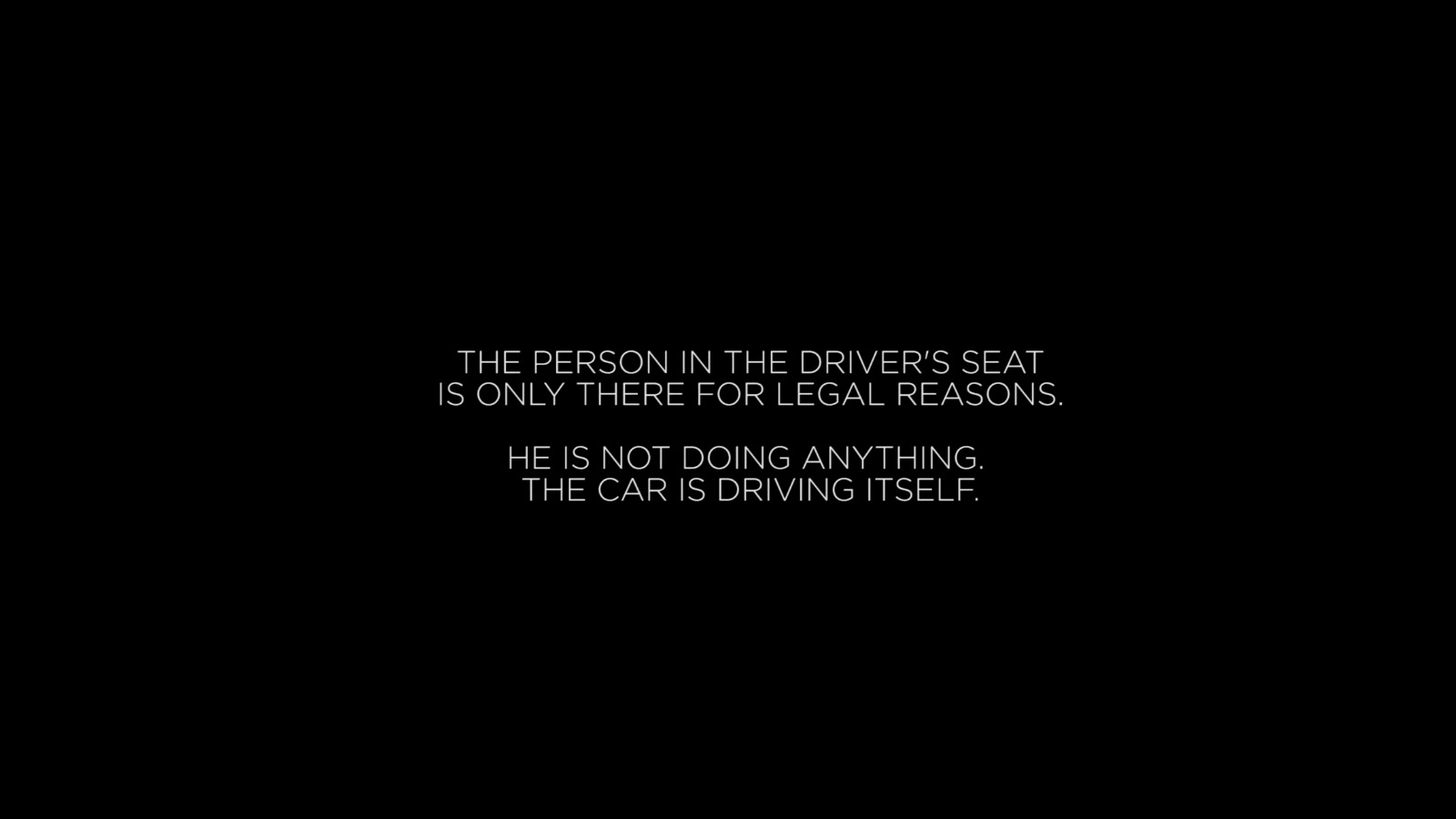 The text “THE PERSON IN THE DRIVER’S SEAT IS ONLY THERE FOR LEAGAL REASONS. HE IS NOT DOING ANYTHING. THE CAR IS DRIVING ITSELF.” is displayed, and these three sentences I think represent the core of all of Tesla’s missteps with Autopilot and FSD from that moment on to the present.

This text became sort of popular for independent Tesla-fan YouTubers to replicate in their own Autopilot videos, as you can see here:

The text isn’t ambiguous at all. It says, very clearly that the human in the car is “not doing anything,” and were it not for the cruel killjoy of a legal system, would not even need to be present in the first place. And, of course, it states, unquestionably, that the car is “driving itself.”

In Elluswamy’s testimony, he made clear a number of details about this video, including, according to the Reuters story,

To create the video, the Tesla used 3D mapping on a predetermined route from a house in Menlo Park, California, to Tesla’s then-headquarters in Palo Alto, he said.

Drivers intervened to take control in test runs, he said. When trying to show the Model X could park itself with no driver, a test car crashed into a fence in Tesla’s parking lot, he said.

“The intent of the video was not to accurately portray what was available for customers in 2016. It was to portray what was possible to build into the system,” Elluswamy said, according to a transcript of his testimony seen by Reuters.

Of course, this is all a huge deal because Autopilot, and later FSD, are not systems where the car is ever completely driving itself, and where the human should ever be doing nothing. They’re Level 2 systems. They require a human being in the driver’s seat, alert and aware and ready to take control with minimal or even no warning. I’ve discussed the inherent flaws of Level 2 systems here multiple times before, and portraying a Level 2 system as something that is more capable than it is, with no disclaimers at all, only adds to the already existing problems of how humans interact with and over-trust these systems, which is at the root of what goes so wrong when Level 2 systems fail.

Other parts of Elluswamy’s testimony brought up more concerns, like how he apparently doesn’t understand some very basic autonomous driving concepts, like Operational Design Domain, which just means the expected conditions of the environment one expects an automated vehicle to operate within. These issues were noted in a series of tweets by automated vehicle engineer Mahmood Hikmet:

I don't know if I can put into words how terrible this is, but I'll try.

This quote is from a deposition of Ashok Elluswamy, Tesla's Head of Autopilot Software relating to the 2018 fatal Autopilot crash of Walter Huang.

He doesnt know what an Operational Design Domain (ODD) is. pic.twitter.com/SqeE7xp2m4

Hikmet finds multiple examples in the testimony where some basic autonomous vehicle design and operational concepts like perception-reaction time are said to be unfamiliar: 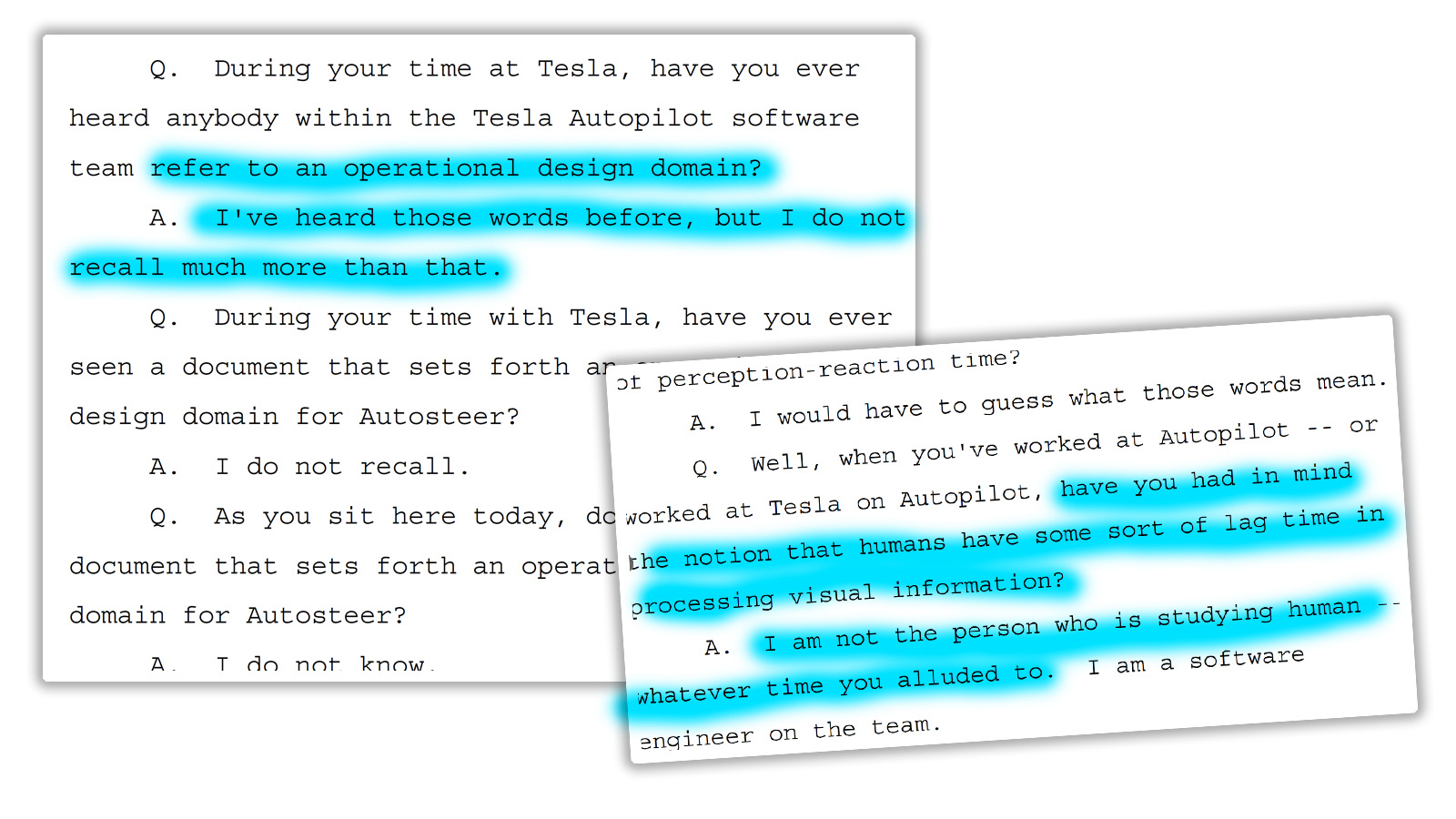 I honestly don’t know how to process this. It just doesn’t seem possible that someone in charge of Autopilot wouldn’t at least be aware of what these concepts are. They’re really ground-floor kind of ideas: what conditions the system can operate in and how long they could expect handover to a human driver may take. This is day one stuff. I’m genuinely baffled.

Now, all of this is important to note, but it’s also tangential to the main point here, the conclusion that all this renewed scrutiny on that 2016 video has brought me to. My conclusion is that this video represents a way of thinking that has doomed Tesla’s entire automated driving program, and, I think, needlessly, because so much of the underlying technology is actually genuinely impressive, and has massive potential to do good.

You can think of it like this. Once Tesla decided to develop Autopilot and FSD, it had two paths they could choose to go down: one path would be to use the technology as something that works as a backup to the human driver, a pair of AI hands hovering over the drivers, invisibly, ready to leap into action when it becomes clear that the driver has done something that could cause harm.

In this approach, Autopilot would have become a safety feature, pretty much exclusively. There would never be an expectation that a driver is not paying attention and, you know, driving, but if fatigue or poor conditions or distractions or having to pee or whatever caused the driver to make a poor decision, Autopilot would be there, always ready and alert, to take over and help correct potentially fatal mistakes.

There is actually one company I know to be taking this approach: Volvo, with their partnership with Luminar. (I have an extensive interview with the Luminar CEO about this very subject that I really need to get published here soon. I’ll get on that.)

Of course, this method isn’t very sexy. It doesn’t suggest you can relax and not really pay attention, it doesn’t hint that you don’t really need to watch the road, that maybe you could check out your phone or play a game or even ride in the back seat, because, hey, really, the car is driving.

The other method, the one Tesla has chosen and still sticks to, is what I just described up there. It’s Autopilot as we know it, where the human is secondary, monitoring the AI, waiting to see if they need to take control—something humans are terrible at. It’s the sexier approach that, while legally saying all the right things about paying attention and being ready to take over, still implies that you’re living in the future, in a car that drives you around like a robot chauffeur.

That 2016 video, with its misleading opening text and (as we now know) fundamentally disingenuous nature, came to define Tesla’s Autopilot path, and that path was one that played up the “this car will drive for you” and “this car will be a robotaxi that will make you money” angles instead of the safety angles.

Sure, they tout alleged safety advantages plenty, but had they made Autopilot something that worked with a driver instead of a half-ass replacement for a driver, they would have had something with unquestionable safety advantages. They could have leaned into that. This isn’t the 1950s anymore; safety does sell cars. Had Tesla taken this approach, Autopilot’s considerable merits could have been appreciated without caveats, because its deficiencies and potential for misuse simply wouldn’t be such an ever-present factor.

Autopilot is technically very impressive. It does some amazing things, and when you look back at how far this has all come since Stanley the VW Touareg won the DARPA Grand Challenge in 2005, it’s really quite staggering.  And that’s what makes all of this so frustrating: The tech works in many contexts, but Tesla’s entire marketing of Autopilot and now FSD has always been about pushing expectations of it into places it’s just not suited for.

Is this all Musk’s decision? Or a collective decision from Tesla’s marketing teams? I really don’t know for sure, but I do know that Musk has consistently pushed people’s expectations of what Autopilot/FSD are capable of, with tweets like these:

Agreed. That’s approximately date when we expect Enhanced Summon to be in wide release. It will be magical. Lot of hard work by Autopilot team.

Or when he said nailing Full Self-Driving is “really the difference between Tesla being worth a lot of money or worth basically zero” last year.

There are many more examples, of course. But it’s clear that Tesla’s loudest, best-known voice has consistently suggested that the automated features of Teslas are much better than reality, and, again, we can see this from that first frame of that 2016 video. And that video pushed the rest of the auto industry and its associated tech startups to dump $100 billion into this field without much to show for it beyond a few robotoaxi services here and there and glorified cruise control.

So, with everyone talking about this video again, I just want to frame it for what it really is: a manifesto of how Tesla would approach their semi-automated driving systems. It’s like a historical artifact now, a record of a choice made at a crossroads. I think as time goes on, it’ll become more and more clear that it’s also a symbol of the wrong path taken.

Autopilot could have been a true safety revolution, instead of good tech being presented in a messy and borderline negligent way.

I'm a co-founder of the Autopian, the site you're on RIGHT NOW! I'm here to talk to you about taillights until you cry and beg me to stop, which I absolutely will not. Sorry. Hug? Also, David's friend.
Read All My Posts »
PrevPreviousChannel Your Inner Mr. Bean In Rowan Atkinson’s Lancia Delta Integrale
NextThis Tiny Motorhome Drives Like A Car And Is Shorter Than A Pickup TruckNext