If you’ve read any of my stories by now, you probably know that I love buying silly things that few others like. It’s how I’ve ended up with no less than five Smart Fortwos. But I found something perhaps even less practical than a Smart. It’s not really a car, nor a scooter… it’s sort of just a thing with wheels. There’s a Sinclair C5 coming up for sale that sat, sealed in its factory box for 37 years.

Automotive and motorcycle history is chock-full of blunders. Sometimes, an automaker puts a car on the market, expecting something resembling decent sales, and instead things go down like a brick in a pond. A sad example of this is the quirky Th!nk City car from this week’s Parts Bin Puzzle. And when it comes to motorcycles, countless manufacturers have experimented with rotary power, all to end up at the same dead end. It’s hard to classify what a Sinclair C5 is. It’s certainly not a car, but it’s also not a motorcycle or scooter, either. Perhaps a Sinclair C5 is best described as “one of the vehicles of all time.”

Our own Jason Torchinsky has written about this little guy a number of times, and he once described it as “the biggest failure in British motoring history.” And for this, I’ll let him take the mic, because his telling of the Sinclair story leaves me rolling on the floor:

It was the brainchild of Sir Clive Sinclair, Britain’s more-affable Steve Jobs, the head of Sinclair Research, the company that gave the U.K. their first real mass-market personal computer, the glorious, rubber-keyed Sinclair Spectrum.

When Sinclair unveiled the C5 in 1985, they made a point to let people know it was a “vehicle, not a car” as though there was any chance in hell anyone would mistake the thing that looked like you were riding on a white plastic hair dryer for a car.

The C5’s electric motor made all of 0.34 horsepower, which is, what, like a part of a horse’s leg and some intestines? It also had a pedal assist, which let you add one humanpower to that incredibly small number, for a total output of, let’s see, carry the two, hardly any.

Perhaps more incredible is that Clive Sinclair intended for people to drive these things to work, in Britain, a country famous for its clammy, cold rain, and the C5’s weather protection was something known in the auto industry as “jack shit.”

Imagine a gray, drizzling morning and you can choose to go to work in either a heated, toasty Mini or sitting on an open lump of plastic. Which would you choose? 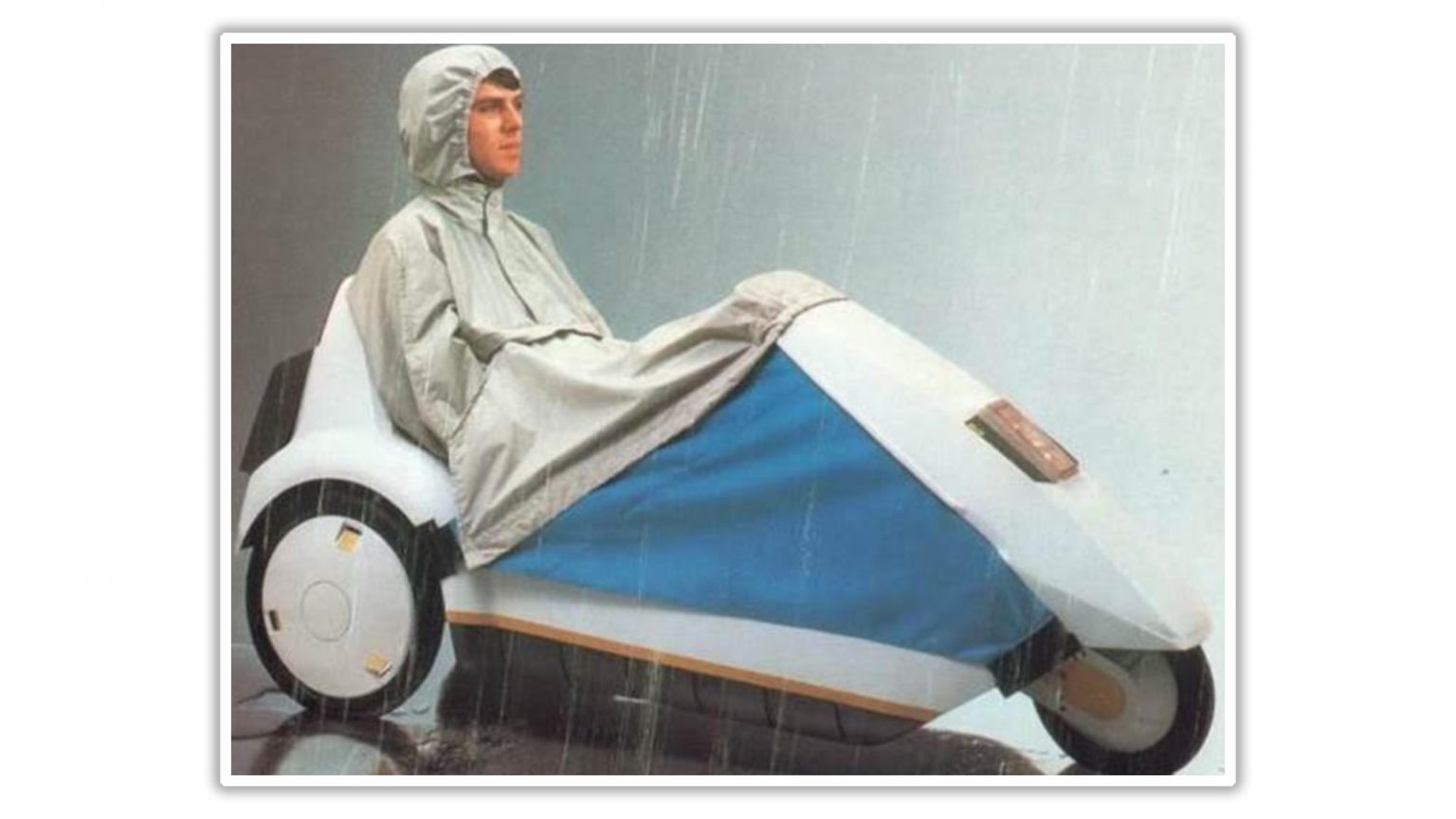 The C5 lacked somewhat in performance. Power came from an electric motor making 0.34 horsepower. And feeding the motor was a lead-acid battery. This setup allowed for a top speed of just 15 mph and a range of about 20 miles. In case you need a little more oomph, or that battery dies, you’re also provided with a set of pedals.

That bit of kit was wrapped up in an injection-molded plastic shell that looked quite futuristic, and underneath, it rode on a Y-frame chassis designed by Lotus. Completed with a battery, a C5 weighed in at 99 pounds. For a comparison from the two-wheeled world, sitting in my living room is a 1986 Honda Spree, a 50cc two stroke scooter capable of 35 mph and weighing in at 86 pounds.

To pilot the C5, you sit down into its sleek body like you would a recumbent bike. But, as Jason noted in his review (below) the handlebar is positioned just in front of your crotch. I can’t think of any other vehicle with padded handlebars meant to protect your family jewels.

This wasn’t Sinclair’s only idea. He also had an idea for a two seat vehicle that looked like a proto-Smart, but without doors. There was also the C10, which also gave off vibes of a Smart built in the 1980s. Our Daydreaming Designer, the Bishop, went through the hard work of redesigning the C5 into a vehicle that people might have bought, and I highly recommend that you read his piece on it!

Oh yeah, so about those sales. As the UK’s the Sunday Times notes, Sinclair expected to sell 200,000 per year, with sales projected to increase to 500,000 units. The C5 was built at the Hoover washing machine plant in the south Wales town of Merthyr Tydfil. Hoover was also tasked with servicing the vehicles.

Unfortunately, as the Sunday Times notes, the C5 was a disaster at launch, with motors overheating and batteries dying in just minutes. And perhaps there was some bad timing, too, as the launch event reportedly took place during a time when roads were covered in ice and snow, something that the C5 couldn’t traverse. Making matters worse was having to pedal the 99-pound thing while passing vehicles blew fumes into your face. 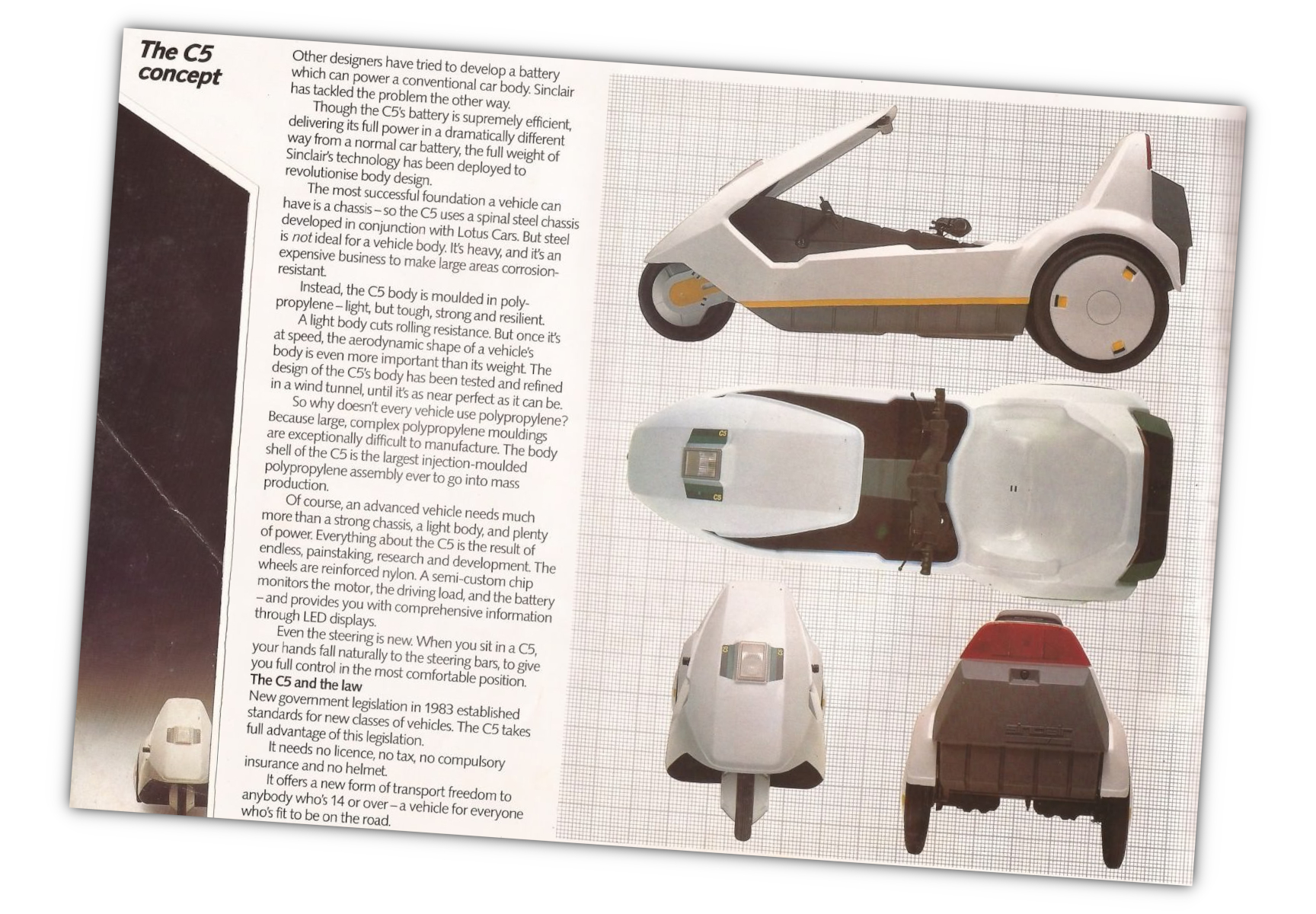 Sinclair tried to keep the C5’s selling price at £399 by making things like mirrors, turn signals, and a horn as options. The C5 found a number of celebrity and royal buyers from Elton John and Prince Harry as well as Prince William. Yet, Sinclair never sold anywhere near the projected numbers. As Jason pointed out in his review and the Lane Motor Museum notes on its site, Sinclair made fewer than 17,000 of these. And of that number, just 5,000 of them found homes. Apparently, Sinclair never did any market research, and expected the C5 to sell itself. That means that there are about 12,000 Sinclair C5s just sitting around, doing nothing.

That brings us to this C5, found first by Silodrome. According to Silverstone Auctions, this C5 was built in 1985. Then, when Sinclair Vehicles failed in November 1985, it was pulled out of the Merthyr Tydfil Hoover factory. Since then, the C5 sat in long term storage. The only picture provided shows the Sinclair sitting in a box in a storage unit, sandwiched between some ducting and another box. Since it’s sealed in that box, you get two keys, a battery charger, a fixing kit, and a tool kit.

Funny enough, the Sinclair story doesn’t end in 1985. The concept was revived again by Sinclair’s nephew Grant Sinclair. The IRIS eTrike uses today’s better technology to fix the faults of the C5. It can go over 30 mph and has a 30-mile range thanks to lithium-ion batteries. Plus, it’s enclosed, making it a better option for when the weather sucks.

As for Sinclair, he continued working on electric vehicle concepts, including the X-1, an electric bike along similar lines as the C5. Despite his inventions, one time he was quoted saying that he didn’t even use computers. Sinclair died in September 2021 at 81 years old. While the C5 may have been a failure, today it seems to have a cult following of sorts. And that’s not surprising, as this little plastic thing sort of predicted our present day of electric mobility machines, just 37 years ago.

Mercedes is a lifelong fan of all things powered by an engine. When she isn't driving one of her five Smart Fortwos or her 14 other vehicles she could be found in the cockpit of a Cessna 172 or perhaps swimming in any body of water that she could find. She also has a deep love for buses of all kinds. Please send her buses. mercedes@theautopian.com Instagram: @mistymotors Twitter: @Miss_Mercedes30 Facebook.com/neonspinnazz
Read All My Posts »
PrevPreviousTell Us About How An Automaker’s Poor ‘Design For Serviceability’ Made Your Repair Job A Total Nightmare
NextThe Movie ’22 Jump Street’ Is Hiding One Of The Most Baffling Automotive Mysteries In All Of Western CinemaNext