“Watch THIS!” cackled The Bishop as he threw a Mustang II and a Mustang S550 pair of diecast models into the the Autopian Matter Transporter (how else did you think we got David to Australia? A paid flight? Ha!). “No Bishop don’t do it!” I cried as alarms blared and smoke poured out of the flashing chamber. Too late. There was Bishop’s updated Mustang II glowing red hot on the rematerialization pad, a mixture of the proportions of the former and the graphics of the latter. I quickly ran off to hide my Hot Wheels collection from the maniac.

[Ed note: Adrian Clarke is a professional car designer who, in his spare time, gives us a chance to test out our craziest notions. Whether it’s a Mini-based trucklet or a Jeep Hypercar, no car idea is too strange for Adrian – MH]

When it’s time to design a new version of a long running model, there’s two basic ways you can go: evolution or revolution. Do you update the themes and ideas of the existing model, including any key visual identifiers, or do you chuck the whole lot in the bin and start over?

To an extent, it depends on what your car is and where it sits in the market place. Something like the Golf has had a very careful evolution over it’s eight generations. It’s a mainstream heartland product so VW would never get crazy with it. But what’s interesting to me is that it used to be the norm to go for revolution. Countless cars from mainstream OEMs were replaced with models that bore little resemblance to their predecessors.

The Mustang was initially one of these cars. The first three generations owed nothing to each other visually or conceptually. When the SN95 in 1994 appeared it had a softer retro look that was sharpened in’99 to better align it visually with the other ‘New Edge’ design language Fords that were appearing at the time. However, when the 2005 fifth generation was released the design controls were fully set for 1964, and the Mustang has been there ever since. With the latest 2024 Ford Mustang, my whelm was well and truly under. Where was the revolution?

Of course heritage sells cars. But the Mustang’s isn’t just one car from 1964. It’s at least three completely different cars up until 1994 (and even in that first generation the final models had substantially different sheet metal to the original car).

The Fox body was a result of Ford wanting to adopt a more European aero influence on the Mustang. Chief designer Jack Telnack had returned from a tour of duty in Europe and he pushed the design team away from updated Mustang II ideas and towards something else – a radical new laid back front end and a tailgate. He wanted something more akin to the European Ford Capri, but clearly American. 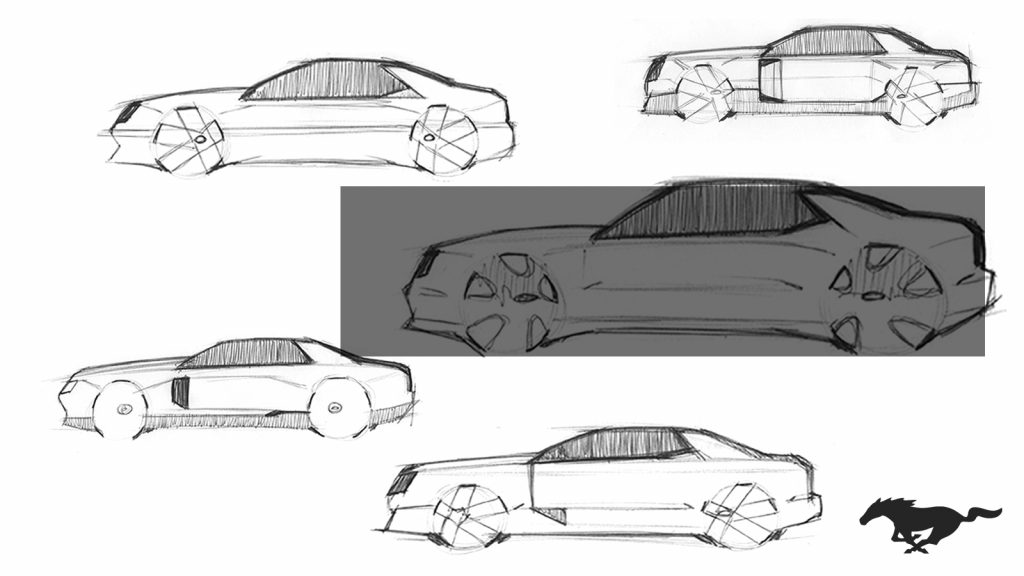 What I’ve tried to do is take the ideas of the Fox body, and it’s shape and give it a modern update. This isn’t meant to be a slavish re-imagining copying details like for like, but something more akin to what Nissan have done with the latest Z car. Something familiar, yet totally up to date.

I don’t always start off with side view thumbnails, but I felt in this case it was important to allow me to try and capture the Fox body proportions – an angular coupe with a raked rear windshield and short dash to axle ratio, coupled with that laid back front end. I didn’t want to have the classic Mustang scallop out of the side, as that would have screamed retro straight away. Instead I went for a modern, clean bodyside with minimal decoration. 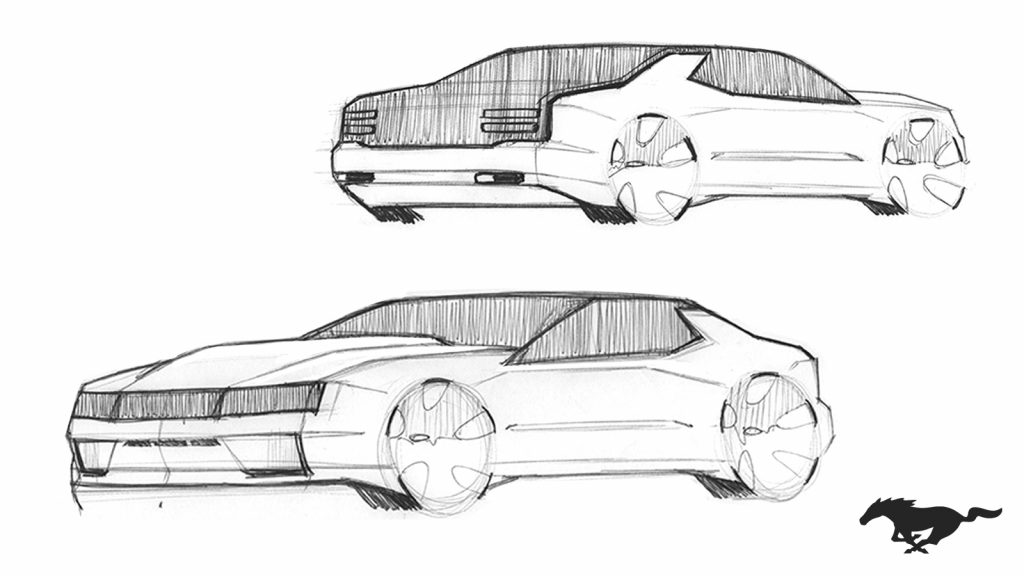 Once the side view is established (as Daniel Simon once told me: ‘when you nail that it’s half the rent paid’) I got straight into front and rear three quarter thumbnails. If you spend a little more time with these they will form the basis for the full render, which is pretty much my usual way of working. I already knew I wanted the tailgate to form part of the overall glazing so it would ‘read’ as one continuous piece, smooth and flush running from the roof down to the rear bumper.

At the front, I knew I wanted blacked out headlights with a graphic running the entire width of the car, but I didn’t yet know what I was going to do for the air vents in the lower corner. That’s why they’re a bit indeterminate in the sketch. Quite often, you can sketch something and it looks good, only to find when you start adding color and shading in Photoshop it falls apart. My cunning plan was to get the body and graphics blocked in in Photoshop, and then experiment pathing out different shapes for the vents to get a feeling for what I liked. 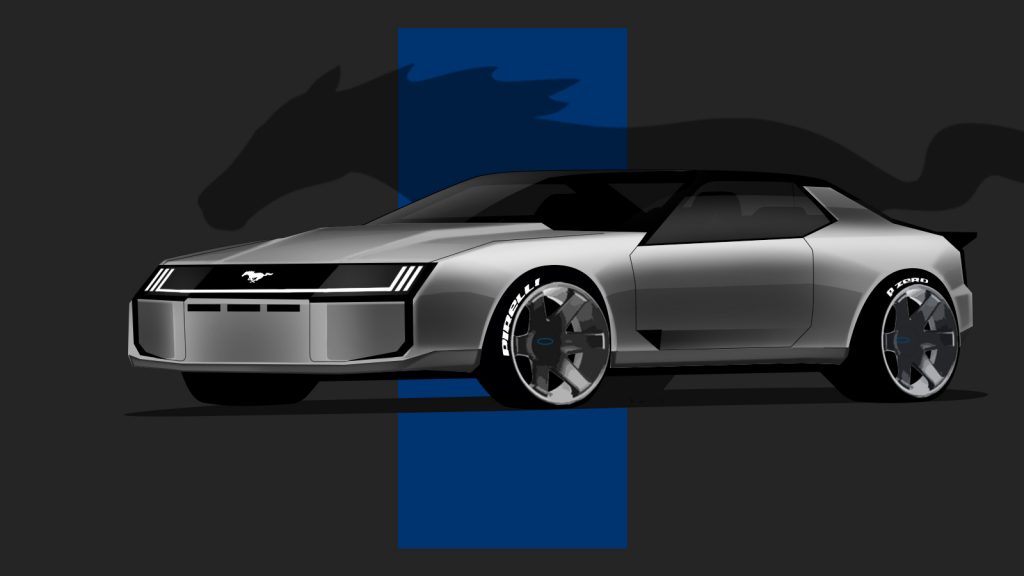 As you can see from the front three quarter render I did settle on something. They’re quite simple and the idea is the vent flows all the way up to the outside of the headlight. In keeping with trying to stick to a modern look, I’ve kept the vents and shut lines very industrial looking. The full width ‘down the road graphic’ with three vertical elements is a bit of a call back I’ll admit, but again it’s straightforward and simple.

The body side has small amount of cladding at the bottom which becomes the front spoiler, and the side vent is just a small triangle incorporated into the bottom of the door. I think this looks nice and subtle and works well with the shape of the door opening. 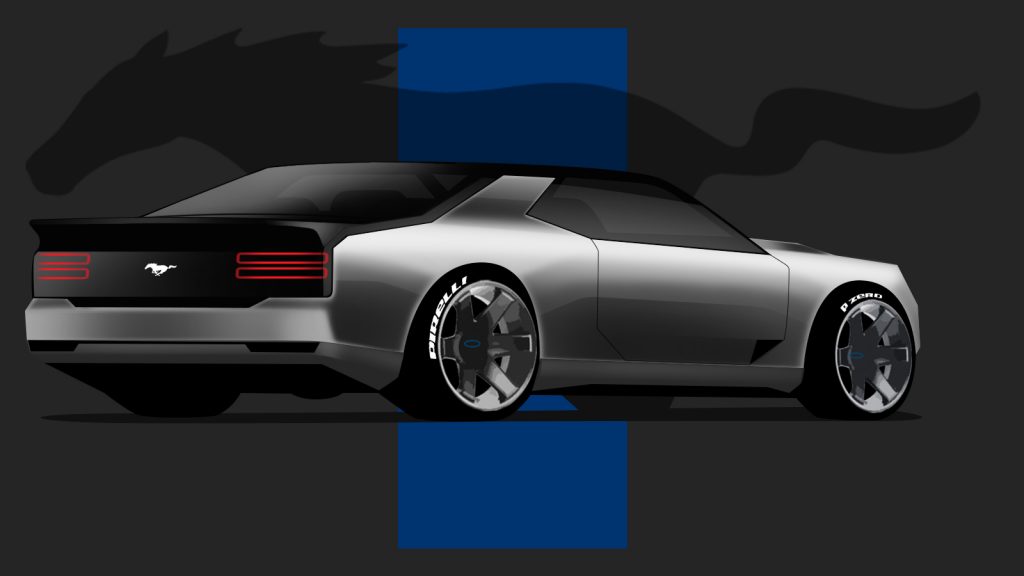 At the back the spoiler is integrated into the tailgate, which runs all the way to the bumper to get the opening as low as possible. The split horizontal tail lights appear to ‘float’ inside the transparency (this kind of thing is quite hard to illustrate, so you’ll have to take my word for it). The reason for the split is I’m thinking the upper element opens with the tailgate while the lower remains in place attached to the body in white, so we don’t need any extra ‘hidden’ special taillights for safety when the tailgate is open (sorry Torch).

A simple horizontal slot for the exhausts is shaped to mimic the line where the bumper meets the glass, and the whole thing is clean and unfussy. The beauty of this approach is the base car becomes a very effective canvas for differentiating the hotter models, which may have lower cladding and a more aggressive bumper treatment.

In the interests of full disclosure, I did once own a Fox body. I can’t remember the exact year, but it was an early eighties model with the utter boat anchor 3.3 straight six and weird shift pattern (I can’t remember if it was four or five speed. It was a long time ago and I’m old). I once convinced a girl to go on a date with me by promising her a ride in my Mustang. When we left the cinema in the darkness I proudly fired up my Sony CD autochanger (ask your parents) I had spent that afternoon installing to find I had no headlights. Stereo off. Headlights. Stereo on. No headlights. There’s no beginning to my genius.

So, do you think you want to take this to the cinema to see Bullitt III starring Chad McQueen? Or would you rather spin it into a ditch and drive your partner’s car instead?

(And yes, I know I forgot the door mirrors. I do this all the time. Back when I used to spend my weekends building 1/24th Monogram muscle cars I always forgot the mirrors as well.)

Professional Car Designer and writer about car design. I have a BA in Automotive Design and a Masters in Vehicle Design from the Royal College of Art in London, where J Mays was my tutor. He used to bring in donuts. I was hired from there into a major European OEM. I daily drive a 2011 L320 Range Rover Sport and also own a 1983 Ferrari Mondial QV. I always wear black, love goth music and have way too many books. twitter: @adrianfclarke. Instagram: adrianfclarke
Read All My Posts »
PrevPreviousThe 2022 BMW i4 M50 Is A Faster, Electric M3
NextSee The Evolution Of Nissan Through The Incredible Cars Brought To The Tokyo Motor Show Over The YearsNext