I think you could arguably claim, likely to lots of puzzled faces, that Chrysler was the originator of the concept of the RWD Premium Performance Coupé, as in the mold of cars like the BMW 6 Series or a Mercedes-Benz CL-Class. When challenged, you could point to Chrysler’s C-300 from 1955, a comfortable, large, luxurious coupé that made a brutal 300 horsepower. Chrysler went on to make a series of 300 “letter series” cars, but kind of petered out around the 1970s, and was very gone by the 1980s when K-Car rectilinear, sexless rationality took over. Our own trained designer known only as “The Bishop” took this as a sort of challenge, and imagined what a real 1980s-era Chrysler 300 powerful, executive coupé could have been. So, join us on this voyage into the unknown! Or, maybe more accurately, made-up! 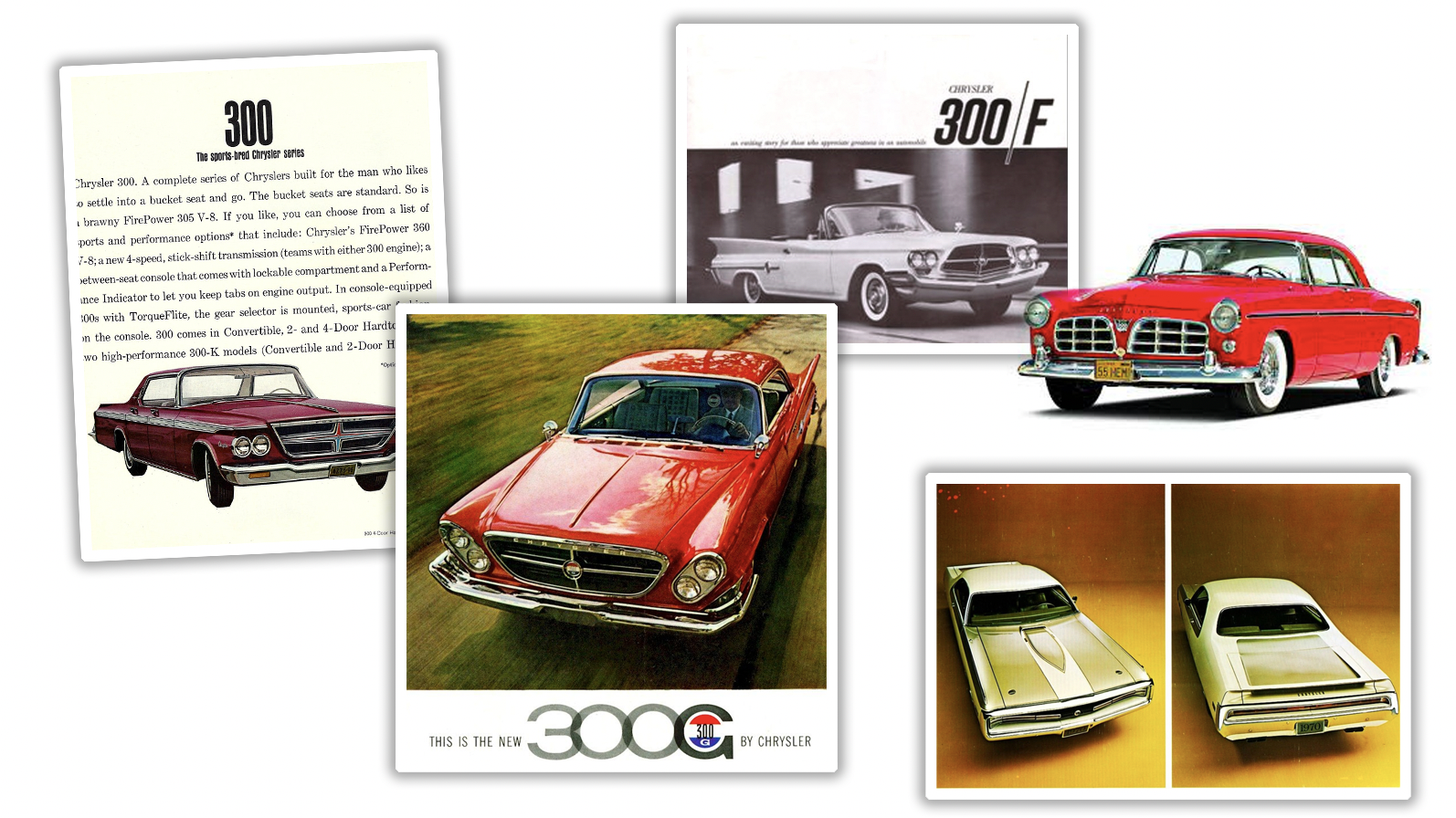 The lineage of Chrysler’s big flagship sedan is pretty impressive, when you think about it; a series of cars covering six generations and 15 years, from 1955 to 1970. After the limited-production 300 Hurst of 1970 (you can see that one above in the lower right, with the tasteful hood scoop) the 300 name really got debased, turning into the Chrysler Cordoba, which, of course, birthed the Genuine Corinthian Leather pre-internet meme:

So, here’s where The Bishop starts: what would a 1984-ish Chrysler 300 be if Chrysler had decided to at least attempt to keep the same fundamental character of those older 300s, but translated to 1980s design and technology? Here’s how The Bishop describes what he’s trying to imagine:

So what would a 1984 interpretation of the 1955 300C be?  It would have to be sort of Firebird for grownups…a 928 for fat Americans, or a home grown sport luxury coupe similar to what specialty makers like Jensen (Interceptor) or Montiverdi (High Speed) once made (with Mopar motors) but Chrysler never made themselves.   It’s as if you took the cars in the images below and put them in a blender, and added a dash of 80s flash to the end result.

Here’s the cars in the image he’s talking about:

[Editor’s Note: This whole article is so damn random. I kind of love it. -DT] 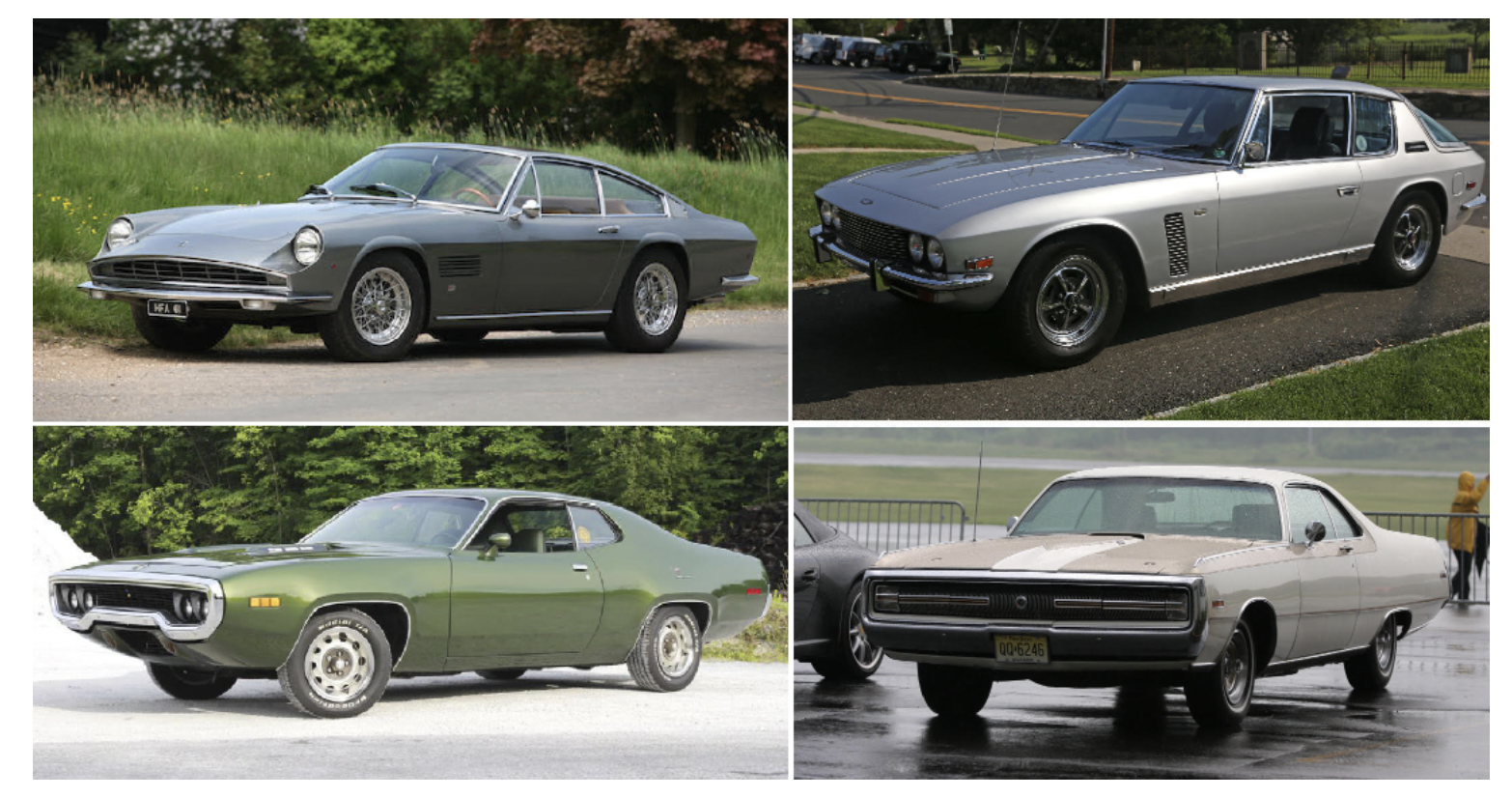 He goes on to explain how he’d adapt the Dodge Aspen/ Plymouth Volare platform that would almost certainly underpin this car into something with at least a chance of pretending to be a performance car:

Powerplant would be the old 360 V8 but with multiple fuel injectors in the throttle body (like Cross Fire Injection) moving to multiport in later years, making around 255 horse.  It could offer a manual transmission but why?  Three people would order it.  Regardless, you’ll have the world’s fastest, best handling Dodge Dart chassis vehicle ever made..for what that’s worth.

An independent suspension rear subframe! He’s right, I didn’t see that coming. I’m also not certain I would have predicted how The Bishop thinks this could look, but I think I like it: 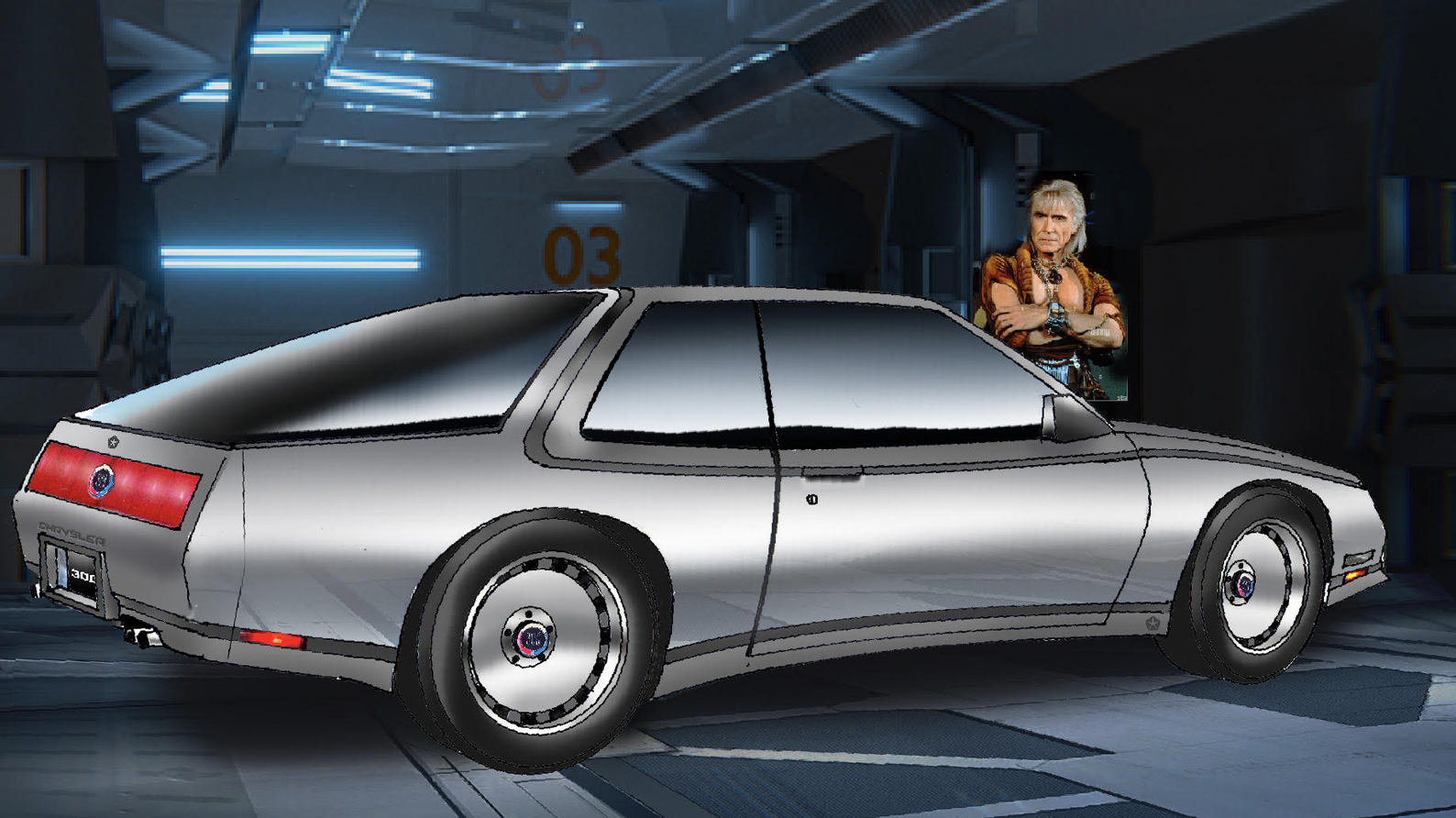 I think the front end treatment is pretty 80s-tastic, too, with pop-up headlights, of course, and also referencing the sinister front end of the 1970 300 Hearst: 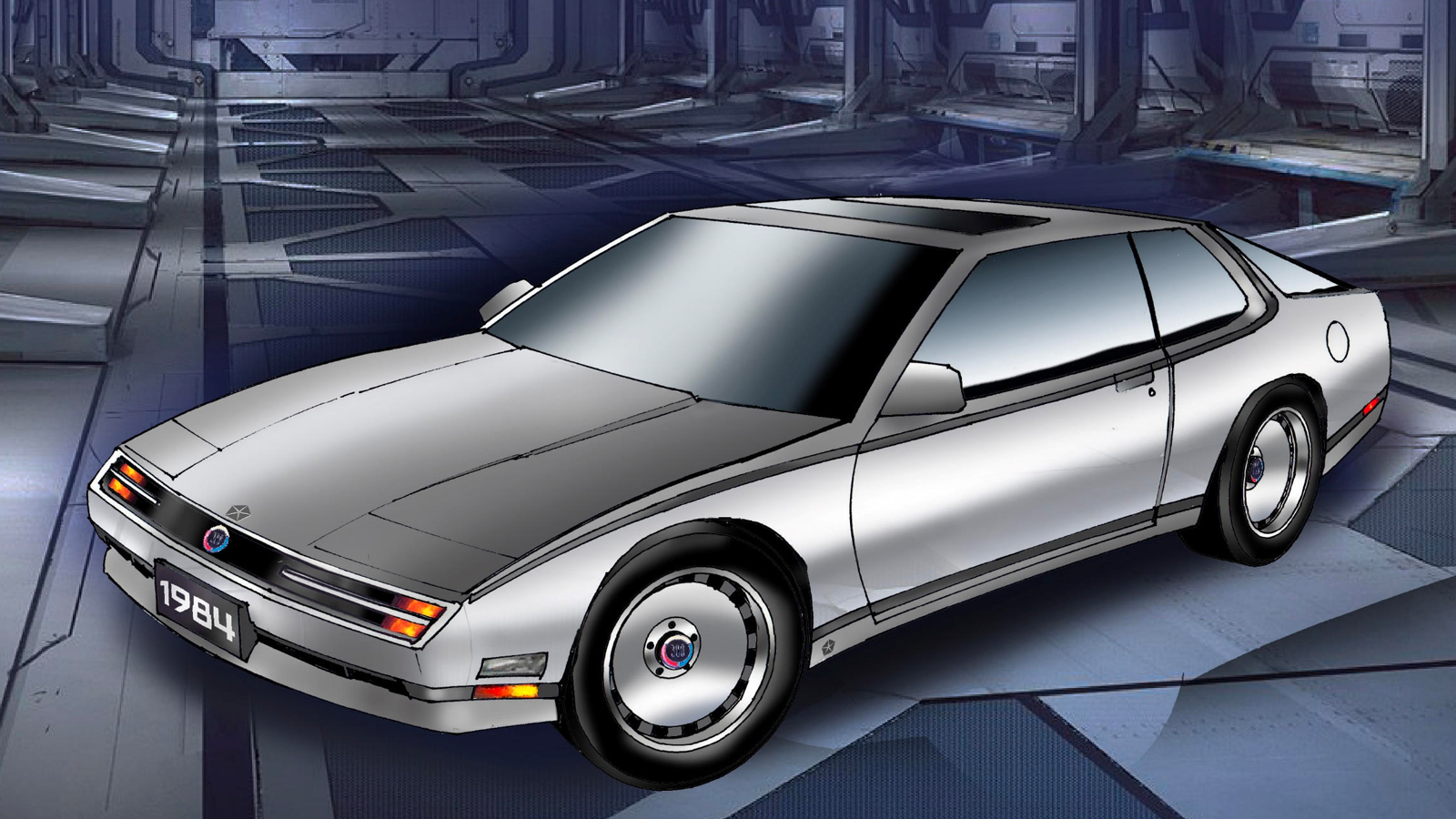 It’s a clean look, with some of that 928 look about it, but also hearkens back, as The Bishop points out, this fastback shape is also reminiscent of the 1971 Plymouth GTX muscle cars, and I think I can see that: 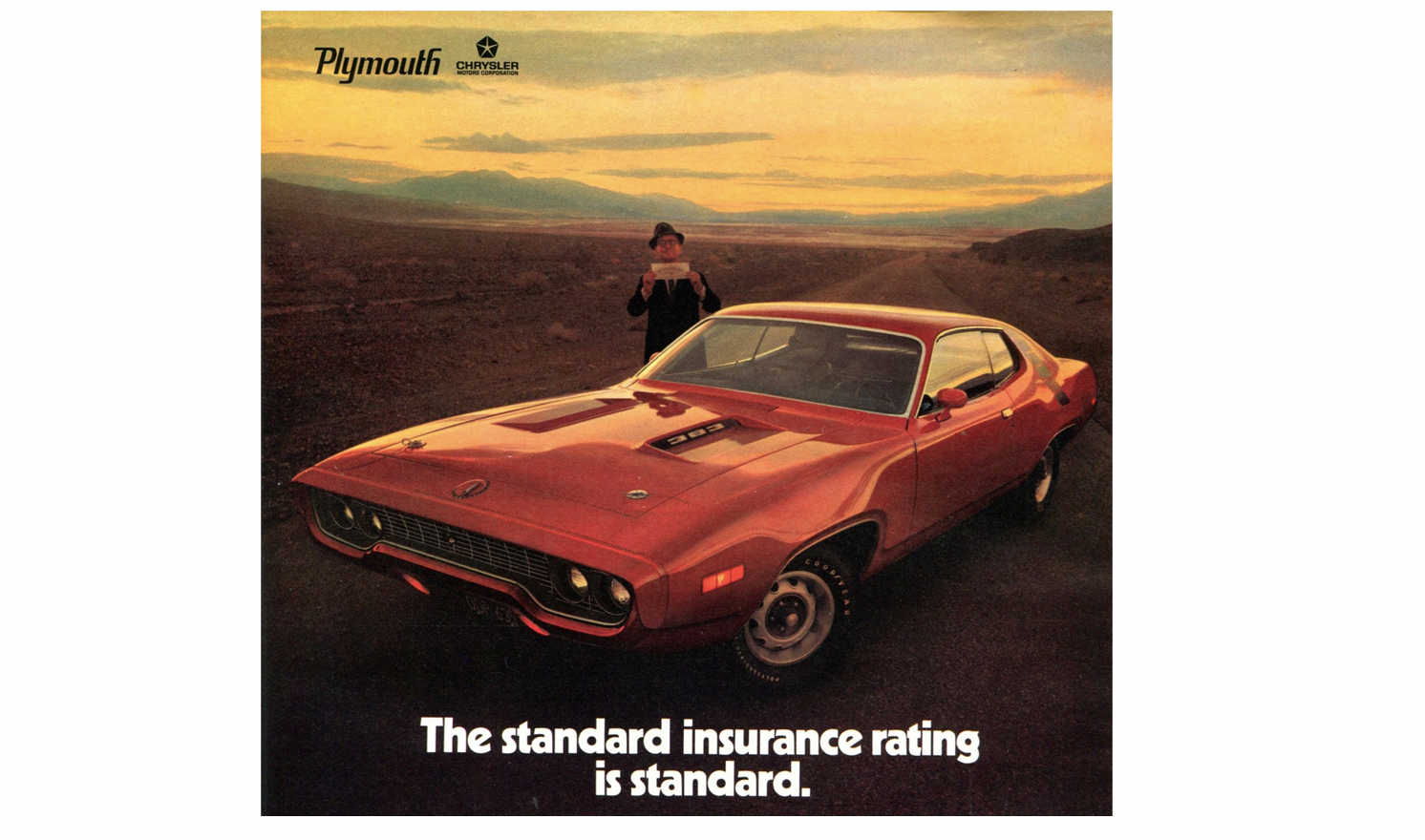 But, really, my favorite part of The Bishop’s design is one of the details, which is this: 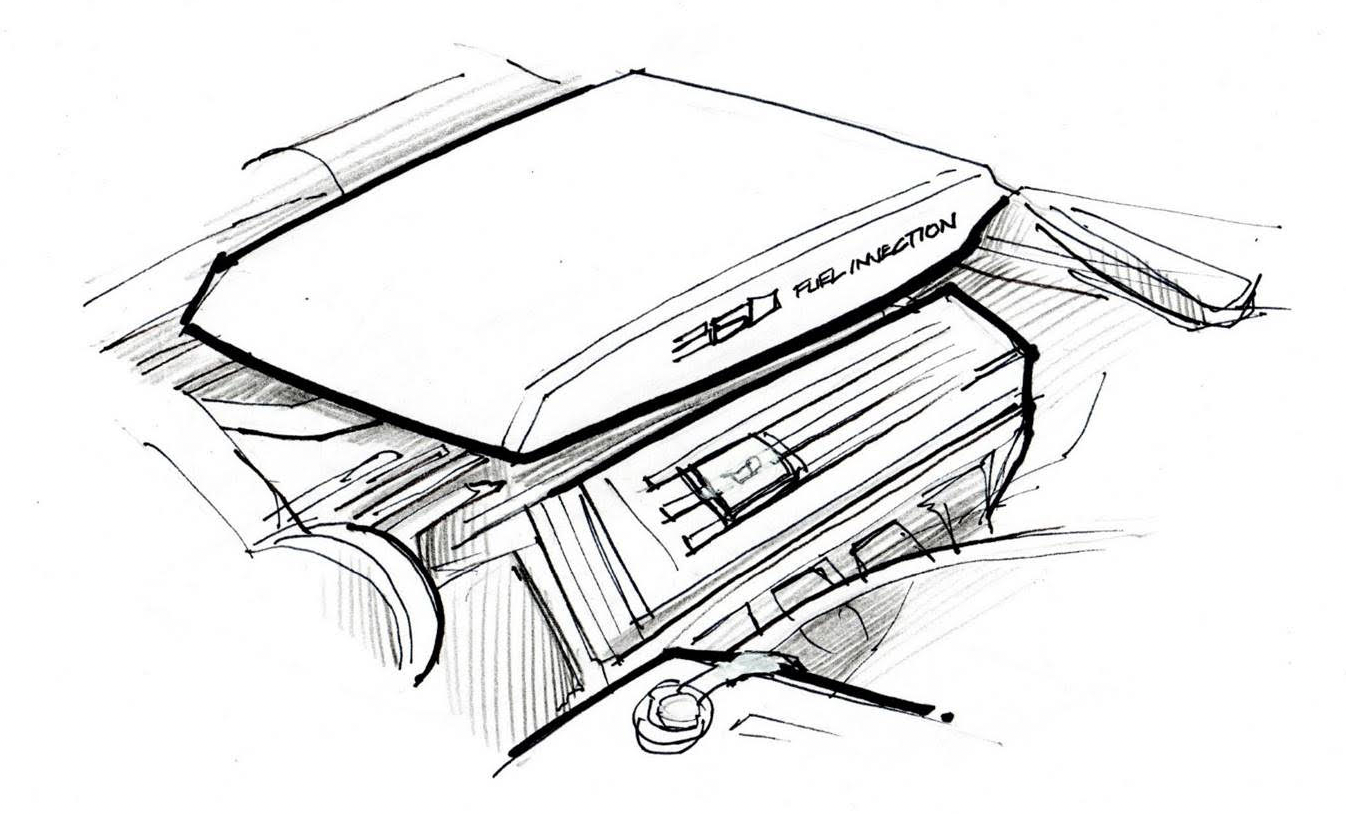 That’s a nice hood bulge over the throttle body fuel-injection setup. But that’s not the fun part! The fun part is that when you’re sitting inside the car, you see the back end of this scoop through the windshield, where it’s revealed by a raised section of the hood. And that back end of the scoop has this:

Yes, lights and shit! According to The Bishop, here’s what we get:

“There will be turn signal indicators at the sides of this slot, but the real trick is the Revline illumination…the intake area glows orange as you approach redline and to red as you are just about to hit it (like an angrily glowing motor), giving you an indication to check the tach without putting the actual tach up there.  Pure fucking theater, sure…but you know you love the idea, right?”

The dash itself would also be gleefully and unashamedly ’80s: 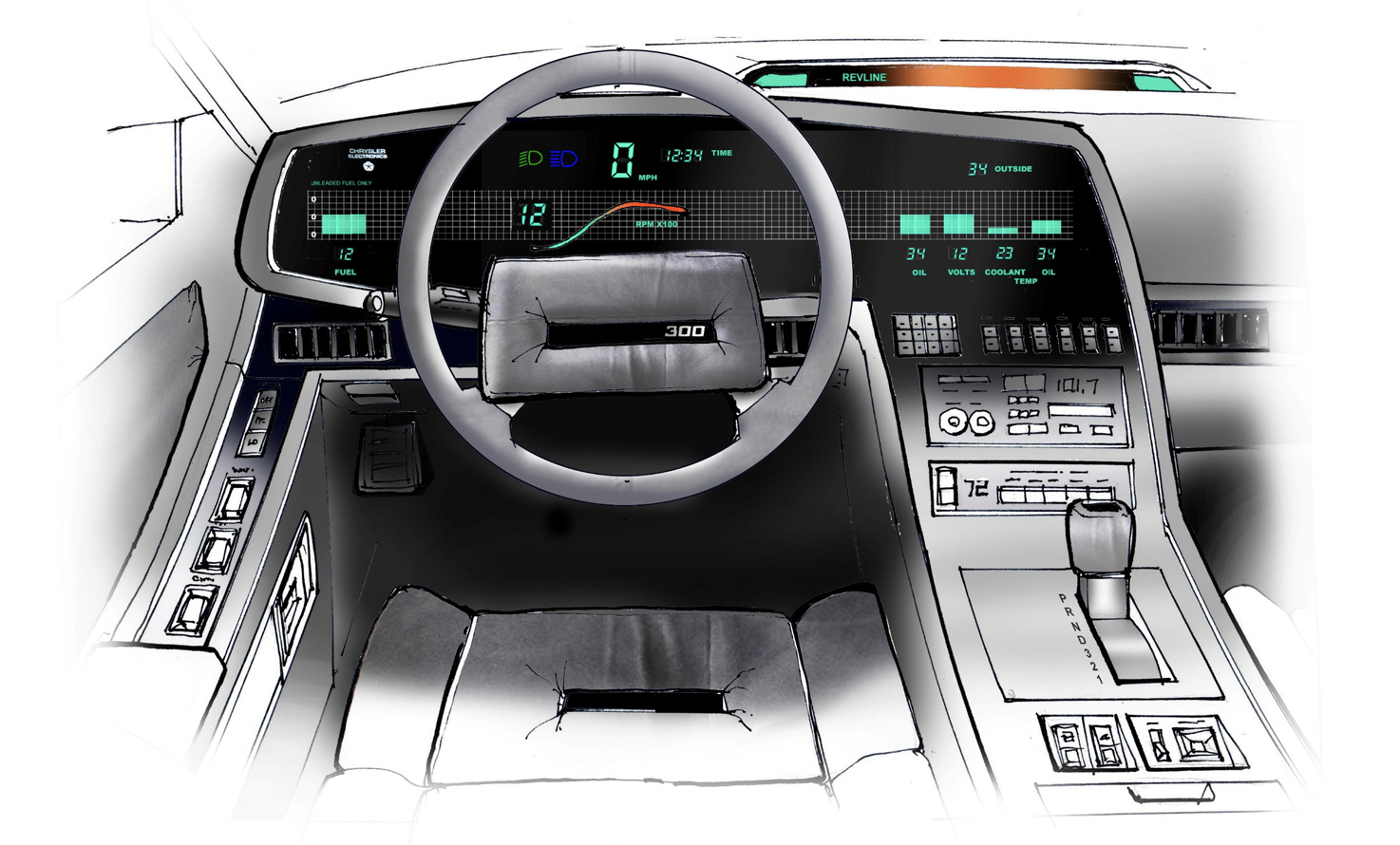 Lots of Chrysler parts-bin stalks, switches, HVAC, radio, and other controls. Maybe even the voice module from the New Yorker? The back seat area is important for a car like this, even if it is a two-door, because the sort of classy, attractive person that buys one of these is of course going to have people who crave being close to them, and you’ll need a way to ferry them around. Here’s how The Bishop is imagining the rear: 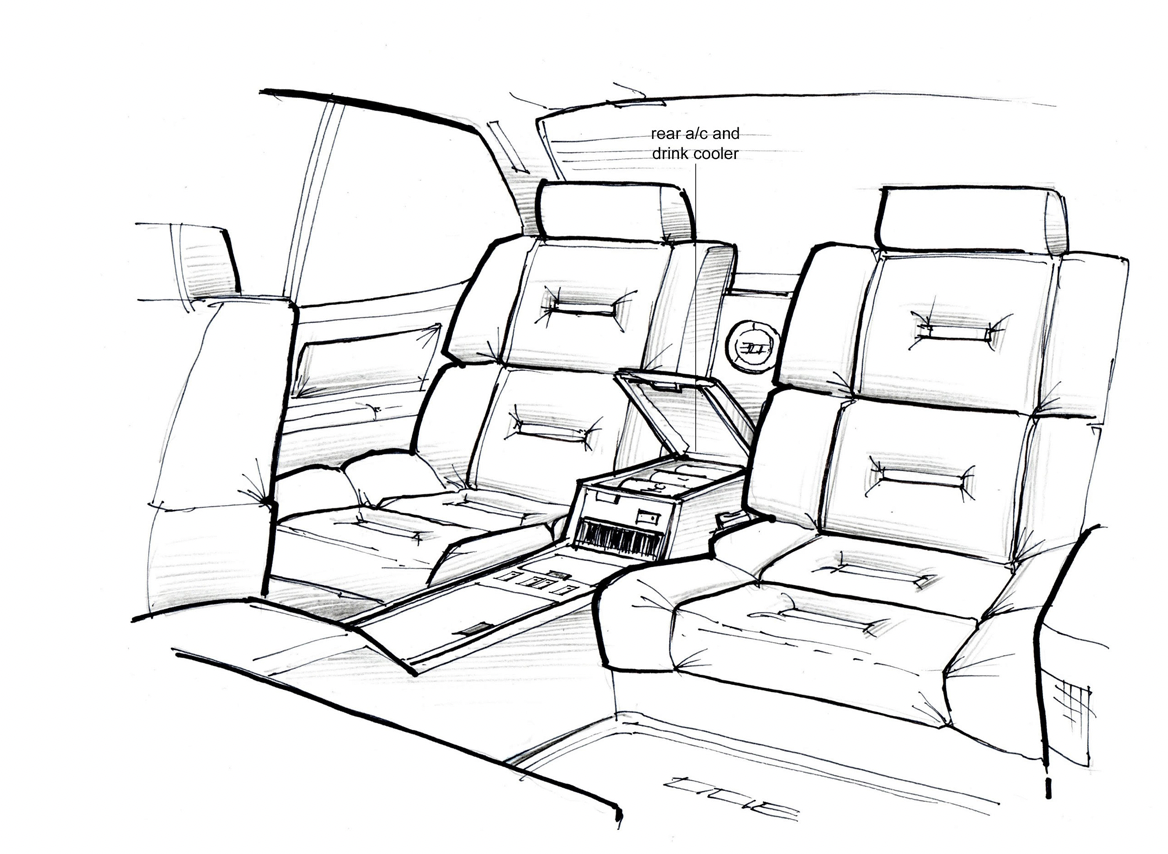 “Tufty button-backed Mark Cross leather but with side bolsters…an odd combo but it works, sort of like Ricardo in the Khan costume.  The rear is pretty spacious for two, and if you can’t have the e24’s total handling prowess you can at least have that car’s rear A/C and drink cooler for cans.  A full length console has controls for reading lights and the rear climate system.  Note the logo panel that blocks the view into the trunk and is carpeted on back to protect the armrest when the seat is folded down (for massive cargo capacity, sort of like a 1966-67 Charger).”

Pretty classy! But there’s a more utilitarian detail I like even better, and that’s in the pretty massive cargo area: 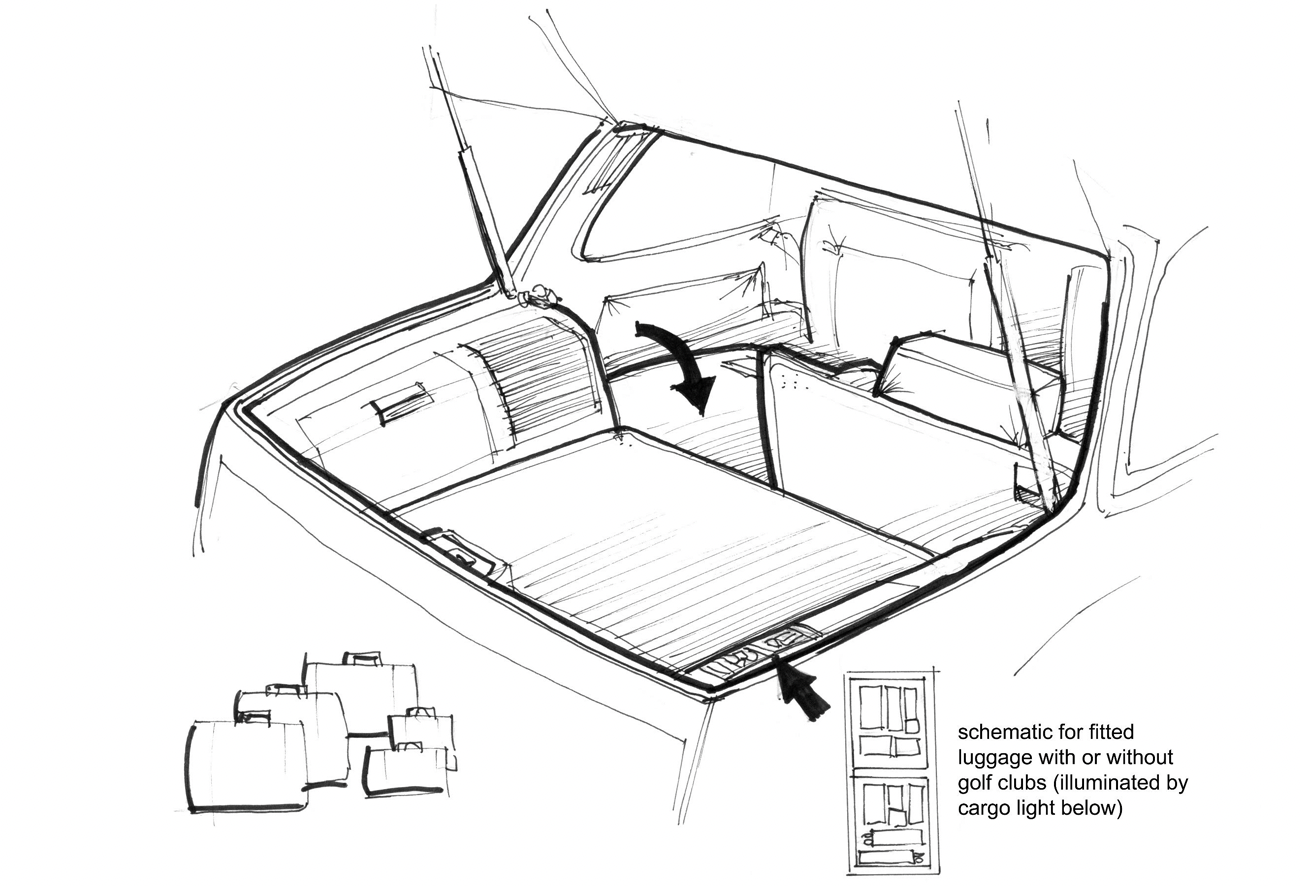 See that little schematic diagram of luggage packing there? That’s an illuminated block diagram of the best way to package luggage into the car, with or without the requisite set of golf clubs. I’m not sure anyone would actually use this as a guide, but I love the idea of it. 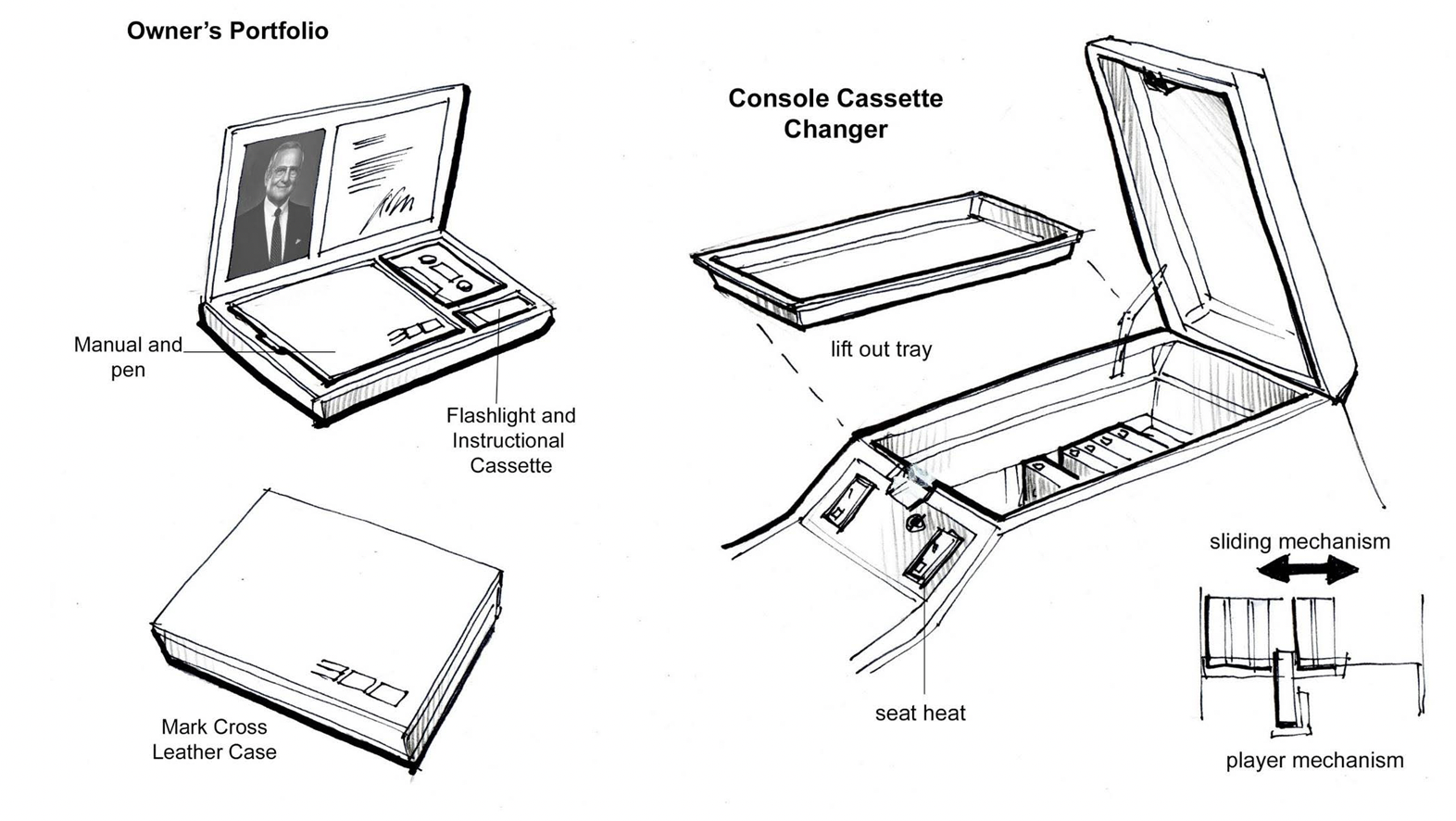 Because The Bishop is a terribly thorough man, he’s also figured out a very clever mechanism for a multi-cassette changer for the stereo, and, even better, imagined not just what the fancy-ass leather-bound owner’s manual will look like, complete with instructional cassette and branded flashlight, but also imagined what the special, personal letter from Lee Iacocca would be like:

“Congratulations on your purchase of our 1984 Chrysler 300, designed and engineered in America to simply be the finest grand touring coupe ever produced.  We have taken every care to be certain that you will be pleased with your ownership experience of this extraordinary automobile.

It is our honor to welcome you to the Chrysler family.

[Editor’s Note: This Bishop guy. The random stuff he comes up with — the fake letter, the sketches of the exterior and interior, the wacky ideas for cars to write about. Whoever this mysterious person is is a bit unhinged. He fits in well. -DT]

Think thats enough? Guess again, because The Bishop fucking delivers. We also get to see the de-contented Dodge version of the same car, called the Minerva! 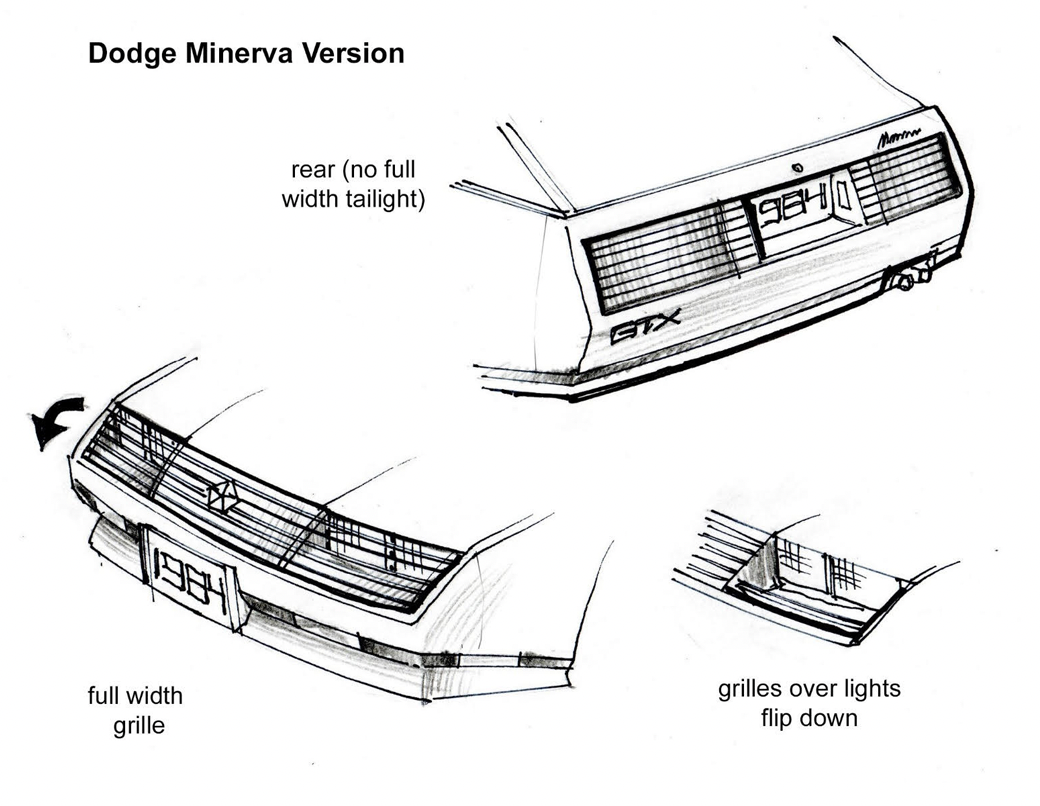 I am thinking that, in keeping with tradition, there would be a less expensive Dodge version (but still pretty much the same damn car), in this case the Minerva (remember, Charger was an Omni 024 based coupe at this time).  Note the headlights behind plastic grilles…illegal in all 50 states so these would need to electrically drop when the lights came on.  Minerva would likely also be de-contented compared to the 300, probably with the live axle and drum brakes in back and a 318 V8 as top power plant.

So, what do you think of this extended reverie about a Chrysler that never was? Does it feel plausible to you? Would you prefer to have lived in the alternate reality where this exists? Would you want to be in that reality if I told you it also featured hyper-intelligent moths that would shout cutting insults at you as you passed?

I’m curious to see what everyone thinks of this. Hopefully The Bishop himself will show up in the comments so you can address him directly, too.

I'm a co-founder of the Autopian, the site you're on RIGHT NOW! I'm here to talk to you about taillights until you cry and beg me to stop, which I absolutely will not. Sorry. Hug? Also, David's friend.
Read All My Posts »
PrevPreviousAttention: Autopian Meetup With David And Torch This Thursday Near Detroit!
NextRemember That Jeep Cherokee That Blew Up After I Sold It To A Nice Lady? I Just Took Apart Its Engine. Here’s What I FoundNext