Remember That Jeep Cherokee That Blew Up After I Sold It To A Nice Lady? I Just Took Apart Its Engine. Here’s What I Found

Thump…..thump. Thump..thump. Thumpthump. My heart began racing as I put all of my might into lifting the cast iron cylinder head from the engine that had “blown up” a few weeks prior, just 20 minutes after I’d sold its host — a beautiful 1991 Jeep Cherokee — to a nice lady. I had sent an oil sample to a lab to try to understand what had happened, but the results were inconclusive. But now I was going to find out for sure. Here’s what I saw inside that dead motor.

Last night, my colleague Jason Torchinsky and I spent about three hours tearing apart the 170,000 mile Jeep 4.0-liter inline-six in the 1991 Jeep Cherokee that I had sold to a nice lady who had driven all the way from Chicago for a Jeep that would only take her 20 miles towards home before overheating. I was initially worried that the “unkillable” Jeep engine was toast, since it had such a severe knock, but then I learned that the noise was just the water pump banging against the engine block.

Still, the engine didn’t run properly, and had no compression in the middle cylinders. So I sent an oil sample out to Blackstone Labs, who found elevated aluminum and iron content, indicating piston and piston ring/camshaft wear. The lab had found no indication of coolant in the oil, which was odd, as multiple adjacent cylinders without compression is almost always a symptom of a failed head gasket (which tends to cause coolant to leak into the oil). Maybe the head gasket wasn’t the issue, and those center pistons had somehow failed? This wouldn’t be the first time I’d heard of a Jeep 4.0 piston breaking to pieces. 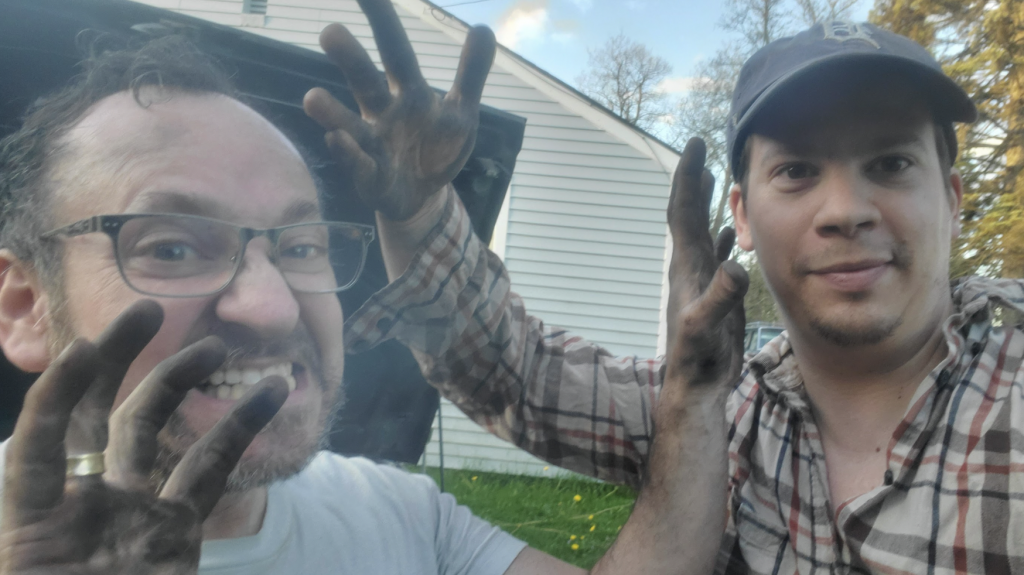 I’ve lost a lot of sleep over this, since I really don’t feel like swapping an entire motor, especially not by the June 1 deadline that the buyer gave me (Yes, she still wants the Jeep, and she needs it soon). So to improve my nightly rest, Torch and I finally yanked the head off the motor yesterday. It’s a job I’ve done far too many times, as AMC’s most legendary motor is— if I’m honest — deeply flawed when used in an XJ, a vehicle with a marginal cooling system.

This head extraction was easier than ever, since I had an extra set of hands and great weather on my side. 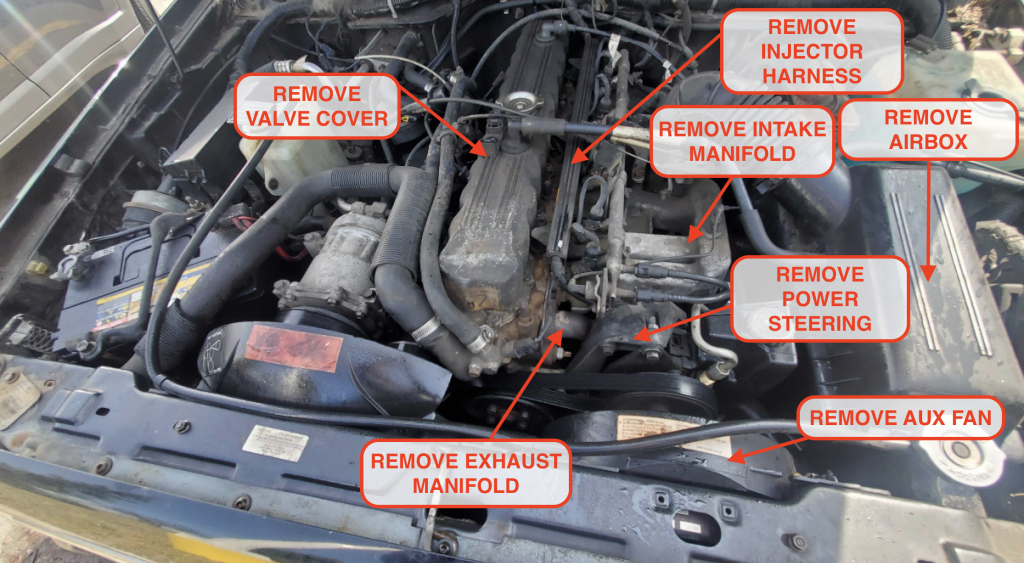 We removed the electric fan and airbox, undid the exhaust and intake manifold, took off the power steering pump, set aside the fuel injector wiring harness, popped off the spark plug wires, unbolted the thermostat and water pump (these weren’t strictly necessary to get the head off, but I’m replacing both), lifted the valve cover, and then loosened all the cylinder head bolts. From there, I slid a breaker bar into the thermostat hole in the head, and lifted up. After quite a bit of pushing, the cylinder head finally popped up, revealing my engine’s six cylinders:

Here’s a look at the engine just before head liftoff, but after we’d removed the intake and exhaust manifold (which you can see there along with the dangling injector harness), as well as the power steering pump, valve cover, thermostat, and airbox: 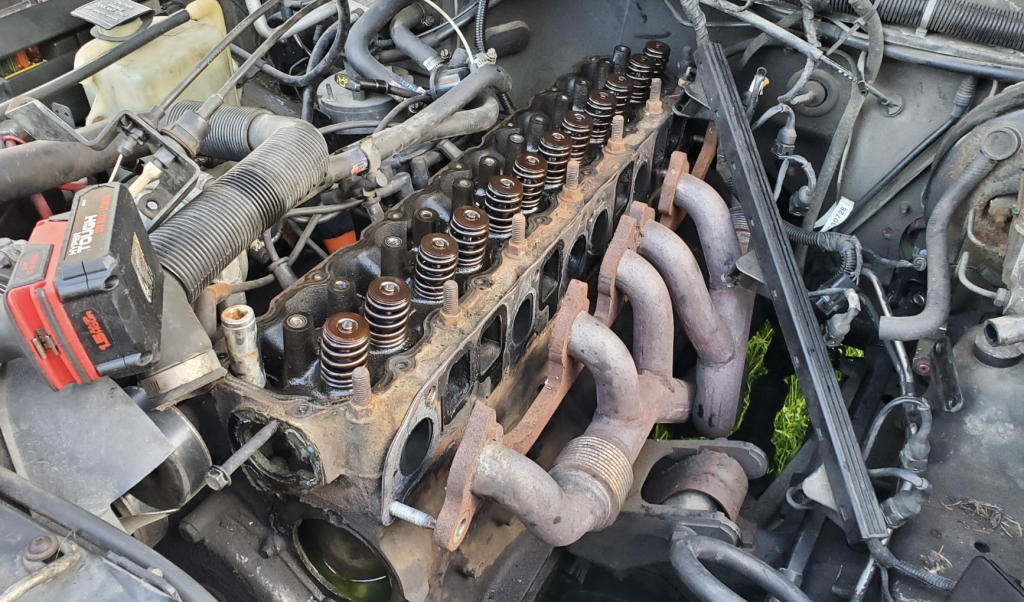 Here you can see the valve cover and intake manifold: 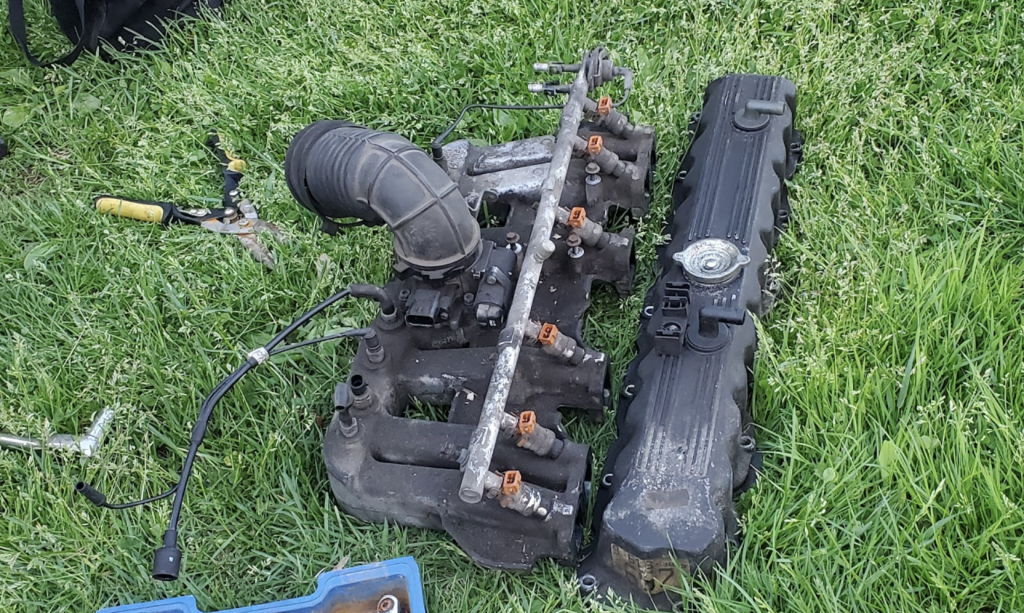 Once we had the head off, we faced the moment of truth: Would there be catastrophic damage, or was this truly just a head gasket failure?

By the grace of the car gods, the pistons all looked to be in good shape, though the bridges between cylinders two and three, three and four, and four and five were all covered in coolant. You’ll also notice that there’s coolant in cylinder five, sitting atop the piston: 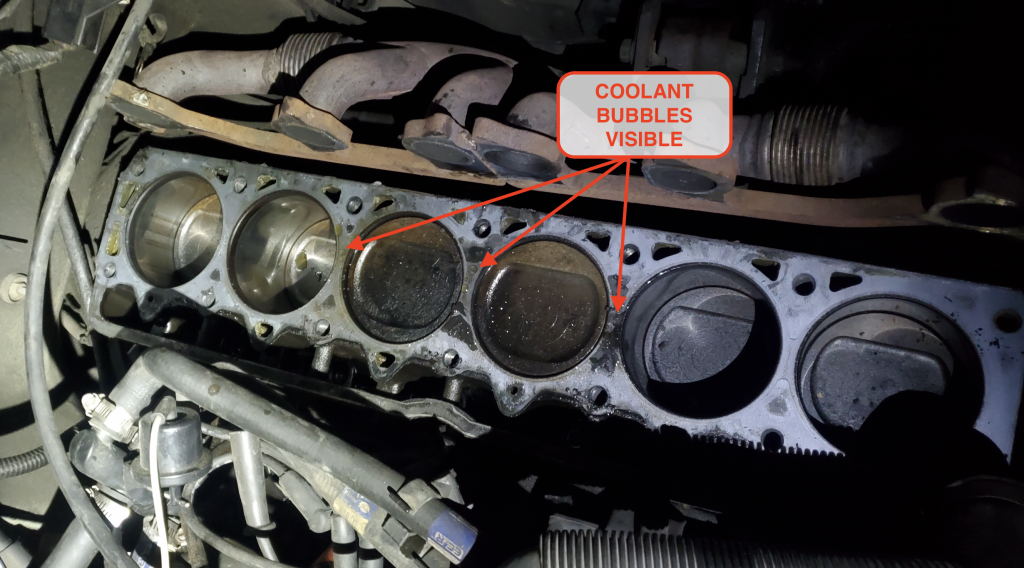 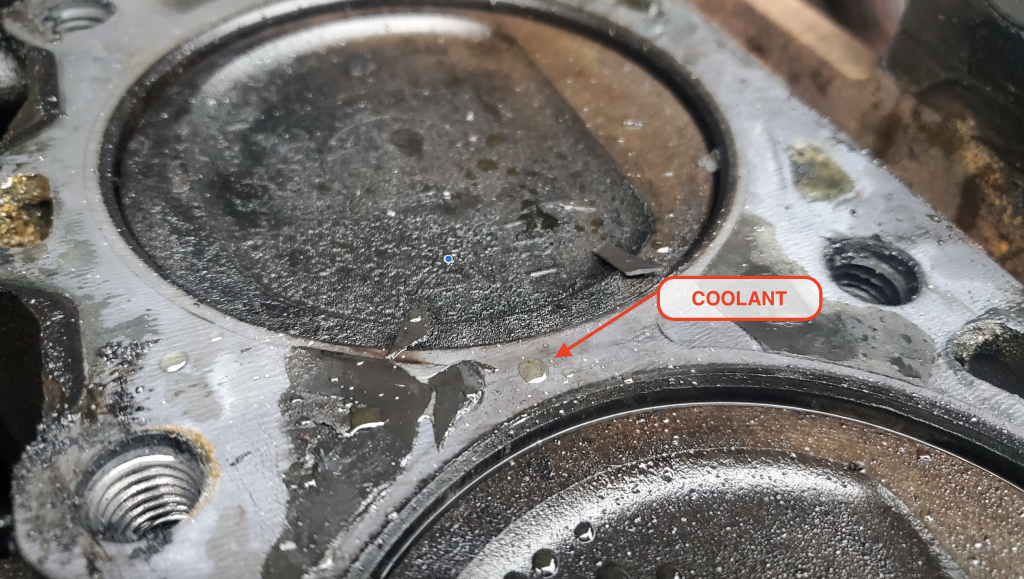 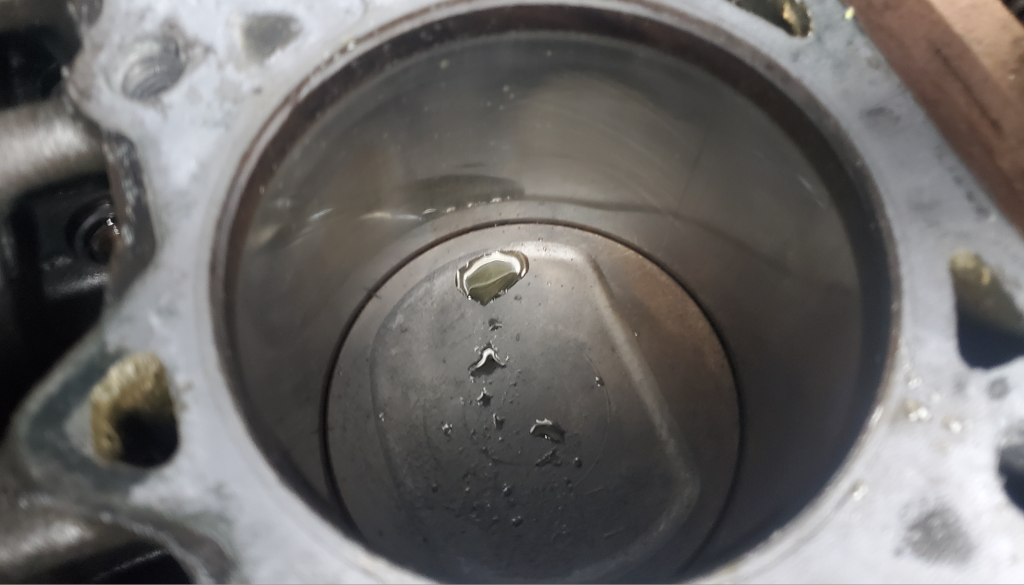 With coolant getting into the cylinders, and oil getting quite hot, you may wonder if there’s any damage to the cylinder walls. Let’s have a look: 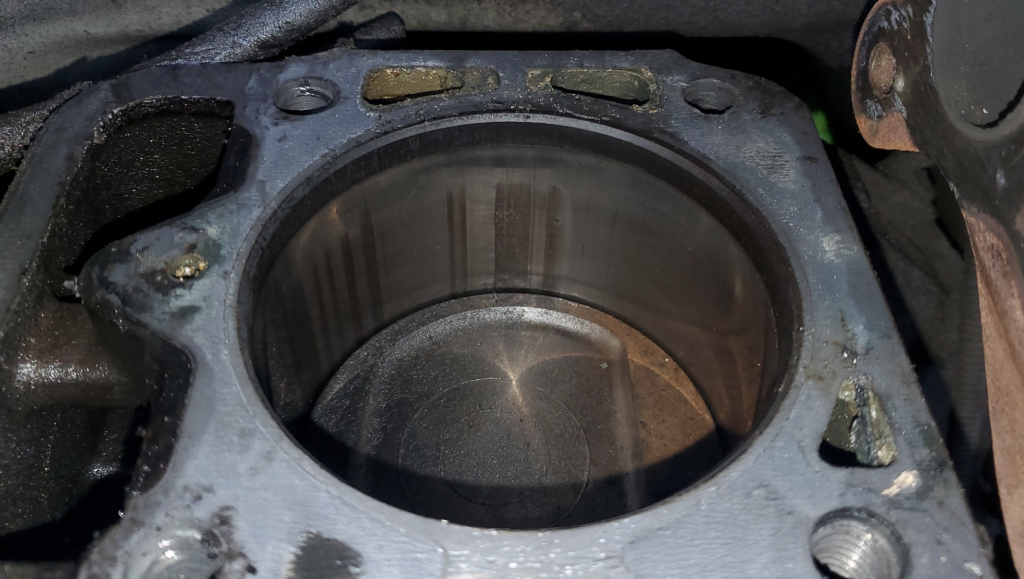 Cylinder six does show a bit of vertical scoring on the cylinder wall, but touching it with my fingernail reveals that it’s quite shallow (undetectable, really). Having opened up a 4.0-liter straight six before, this isn’t that abnormal, and I don’t think it’s something to worry about. The remaining visible cylinder walls all looked nice: 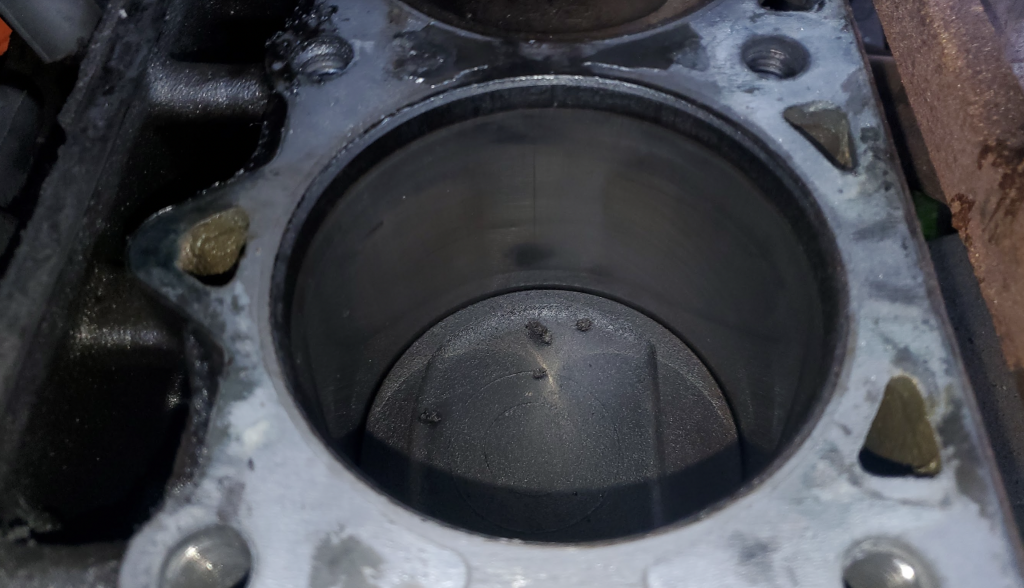 Let’s have a peak at the failed head gasket: 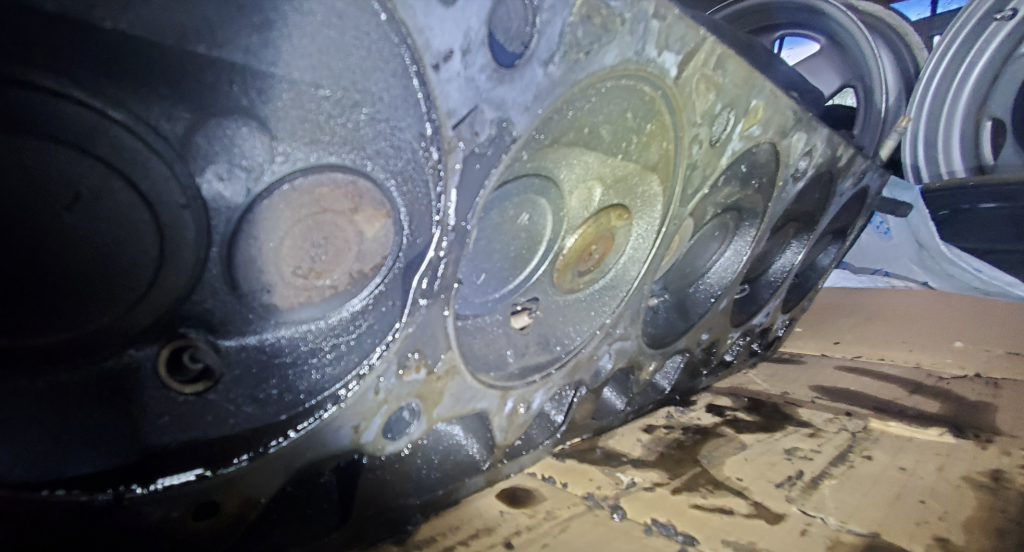 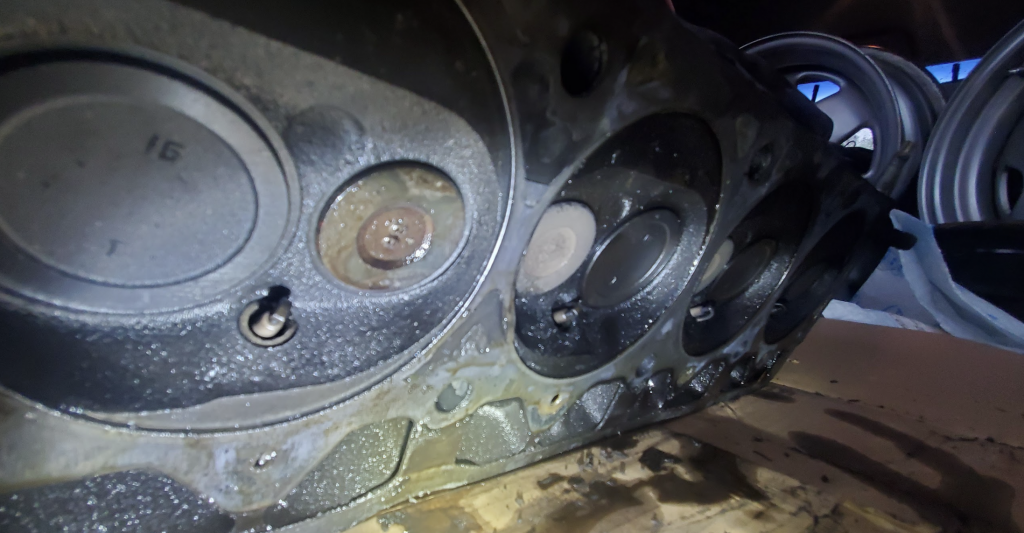 It’s hard to tell how much of the damage occurred during cylinder head extraction, but you can see some bent fire rings (that’s the silver ring around the cylinder bore hole). The image below shows how a new gasket should look. Again, it’s hard to see exactly where the failure occurred, but it clearly did, as coolant was able to pour into the cylinders and cover the bridges between the cylinders (and this didn’t happen during head-removal, as the head was pretty much completely devoid of coolant). I wouldn’t be surprised if the head is warped, allowing coolant to travel between it and the gasket. 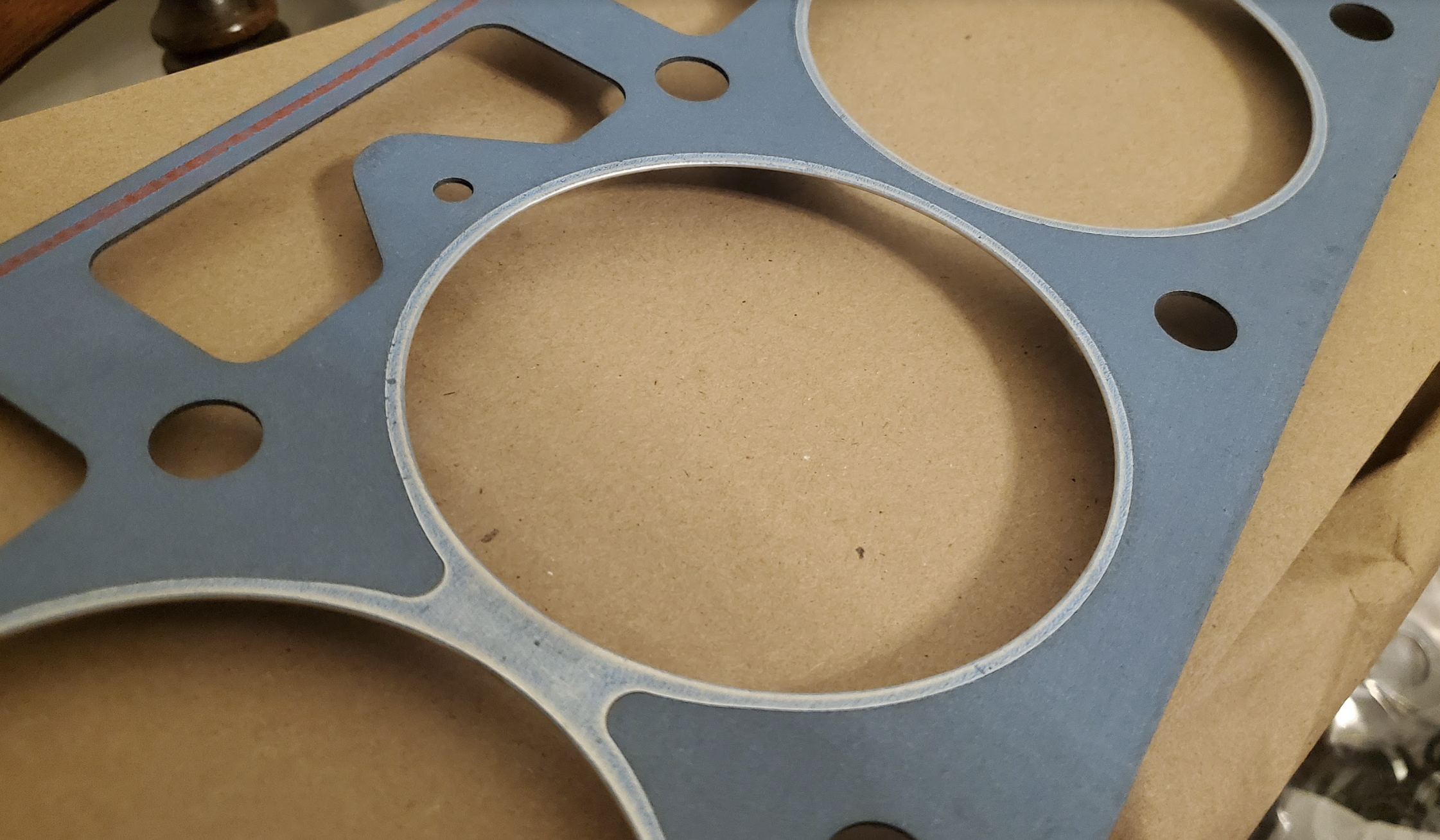 Anyway, the cylinder head now sits in the back of my Jeep. Tomorrow I’ll dump it off at the machine shop, where a 350 pound dude will check the thing for cracks, find them, and then I’ll be removing the head from the spare engine I have in my garage. That head will be checked and then shaved flat. Then Torch and I will reinstall it and pray that this Jeep runs like a dream so I can finally sell it, and bring my fleet down to a reasonable number of cars. I’m not sure how many exactly, which is kind of an indication that maybe it’s still too many, but let’s just ignore that.

Rust-loving Jeep man, cofounder and EIC of The Autopian, Jason's friend. Email: david@autopian.com
Read All My Posts »
PrevPreviousA Trained Designer Imagines What A 1980s Version Of A 1955 Chrysler 300 Would Look Like
NextCold Start: Meet The Ape PokerNext