Facebook-f Twitter Instagram Rss
Menu
Menu
Home » After Years Of Torment, The $1 Oldsmobile From Hell Is Mercifully Helping Me Move Out Of Michigan. But I’m Skeptical

After Years Of Torment, The $1 Oldsmobile From Hell Is Mercifully Helping Me Move Out Of Michigan. But I’m Skeptical 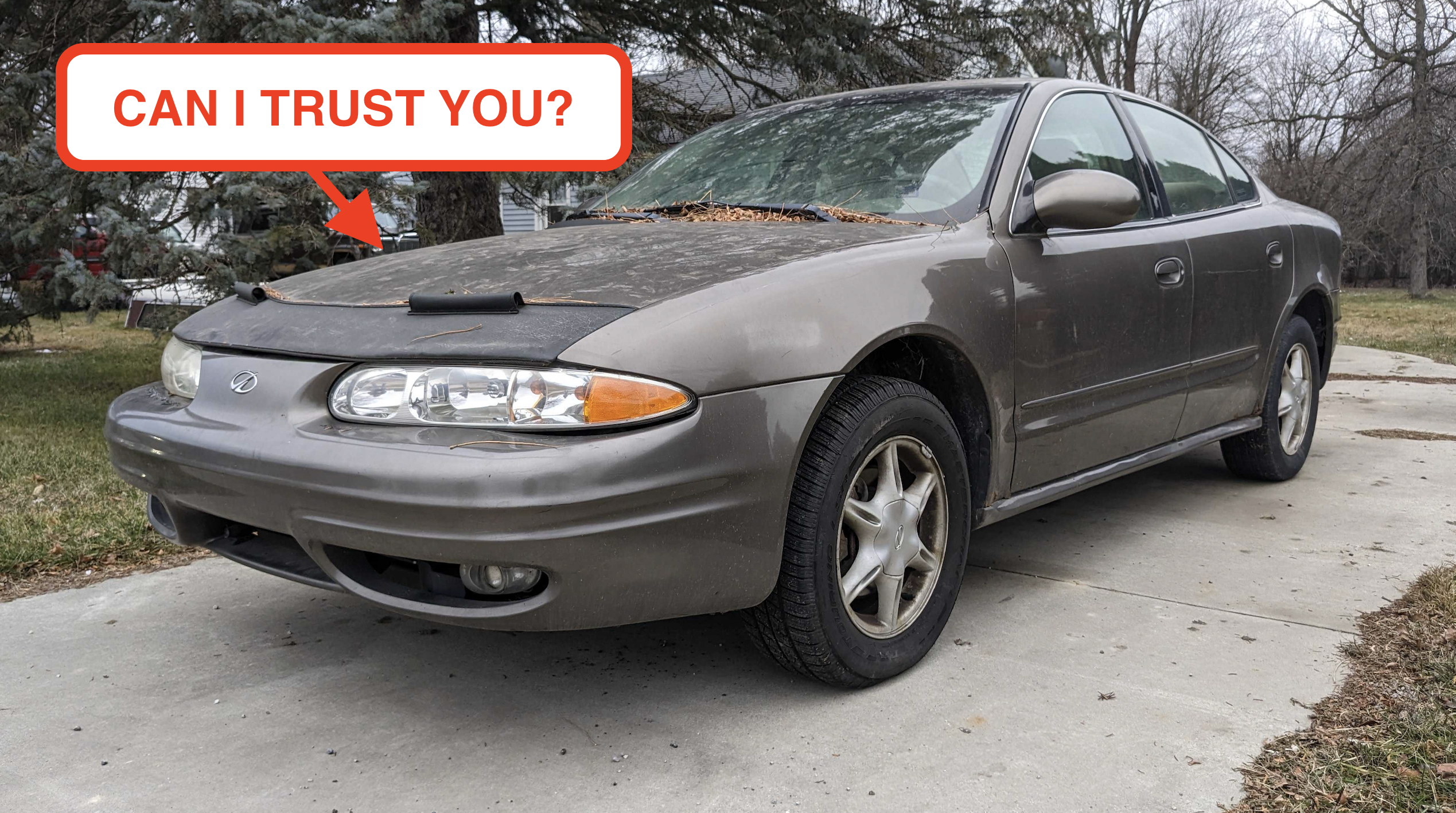 It’s back. The $1 Oldsmobile from hell — the machine that I paid a single Washington for, and then soon thereafter paid for again with many, many hours of misery — has risen from the underworld to live in a new hell: Michigan’s winter. And though the car’s presence usually elicits nightmares and long therapy sessions, this time the car’s return into my life has been pleasant — as if the Twin-Cam-powered GM N-body is finally apologizing for the damage it has done to my psyche. It is a final farewell and a helping hand from an incredibly unlikely source, and part of me is a bit leery. Can I trust this thing for the next month, or will it return to its dastardly ways?

I’m in a bit of a weird spot, because I’m in the process of moving to LA, but I’m not planning to bring any winter beaters, because why would I? So I’m selling the cars I’d normally drive in salt, meaning I…no longer have a car to drive while I pack my belongings in my Troy, Michigan abode. It’s not an optimal setup, and — after shedding a tear even thinking about driving my Jeep J10 in brine-covered I-75 — a thought entered my head: What about the $1 Olds?

“No, not the Olds,” was my first thought.

“But you just need it for a month while you pack!” the red, blivet-wielding groundhog on my left shoulder nagged. “Plus, that Twin-Cam is a solid motor! Much smoother than the legendary Quad 4 on which it’s based!”

Red rodent did have a point. 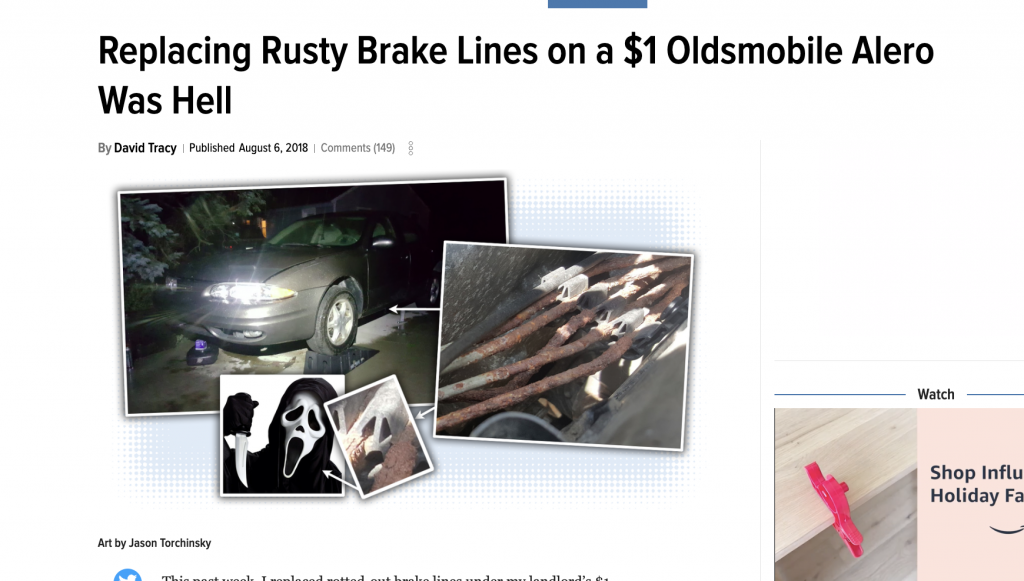 “Dave, the thing has tried to kill your landlord. You remember when the brake lines blew out! Then there was the time the transmission line failed!” the toga-wearing kangaroo on my right shoulder quipped. 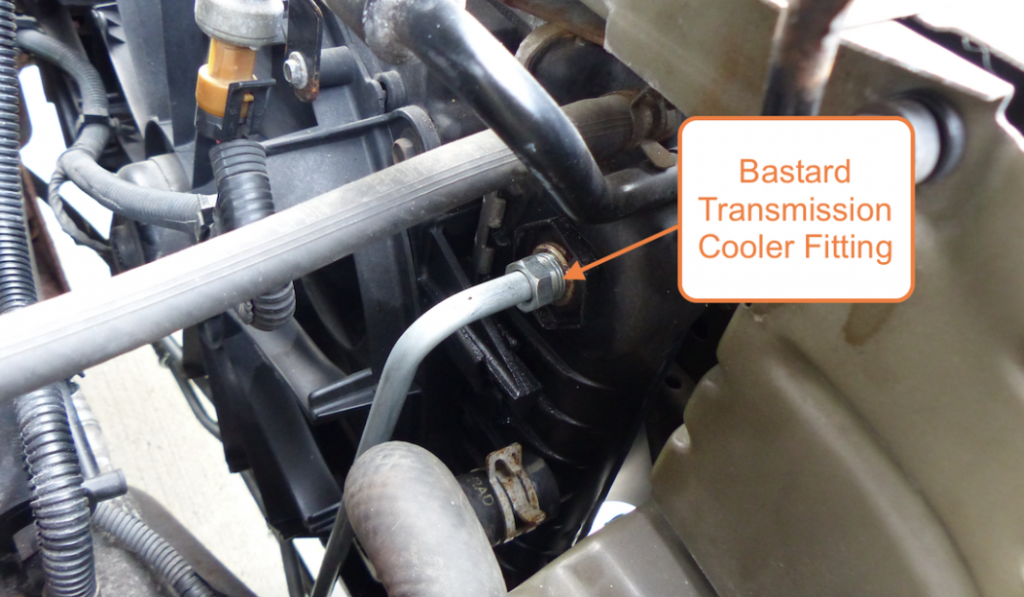 “That’s not all,” the marsupial told me. “The coolant port on the engine leaked antifreeze all over your driveway, and replacing the bad gasket was a pain in the ass!” 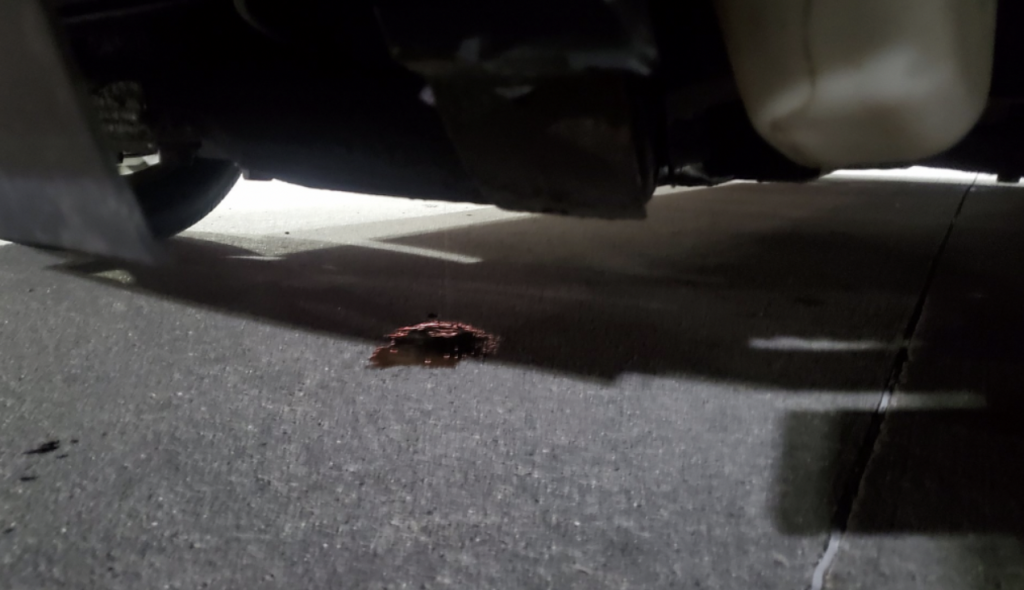 Gosh, that really was a pain. I had to take the intake off, unbolt part of the power steering pump; did I have to disconnect the serpentine belt? I can’t remember. I do remember that it was a rough j—”Not to mention!” the angelic ‘roo said, somehow butting into me writing this article, cutting off a thought I had well after this dialogue, “The last time you drove the thing, the rear control arm literally rotted off and snapped! David, this car is done!”

That was pretty rough, I will admit. 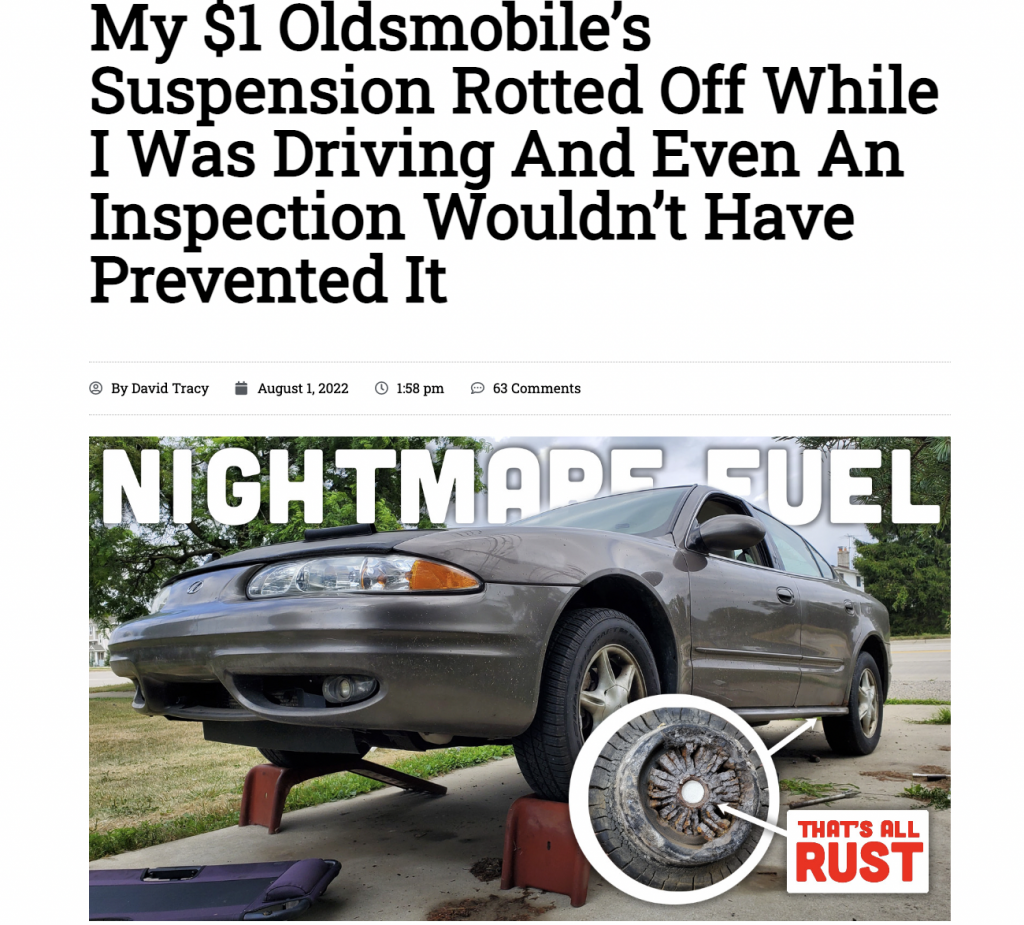 Damn. I was in a tough spot, here. I do need something to drive around, but that Olds has really been a bit of an asshole these past few years. Can a car change? Did the many months of solitary confinement, there on my neighbor’s lawn, undriven, shake some morals into that front-drive family sedan? Had it found car-jesus in its lonesomeness?

I walked over to my neighbor’s front yard to find out. I have a soft, squishy heart, and I like to see the best in things, even if they’ve hurt me before. I wanted to at least give the Olds a chance. So I hooked up some charging cables to the battery, and waited for the thing to charge.

After 12 hours, there was nothing. So I put my charger into repair mode, then tried again — finally, the Twin-Cam fired up, and idled smoothly.

But the lovely motor has never really been the issue, it’s been everything else around it. I dared to place the shifter into drive, then I pointed the Oldsmobile down a nearby street, and gave the rightmost pedal some pressure. The car accelerated nicely, and upon reaching a turn and spinning that big ring in front of my chest, I noted tight handling. The brakes, though displaying an ABS warning due to me not bleeding that ABS block, did a good job, too.

“Damn. This thing is actually… not horrible?” was my first thought as I reminisced upon my rear control arm replacement, followed closely by me abandoning the vehicle in my neighbor’s front yard. I hadn’t really tested the car that much; I’d just gotten the suspension back together, then ditched it. But, after a few minutes behind the wheel of the $1 Oldsmobile, and a few peeks underneath and some hammering to make sure all the suspension bits seem strong, I’m convinced the thing is fixed! Cured of its terrorizing ailments!

You have one month.

Rust-loving Jeep man, cofounder and EIC of The Autopian, Jason's friend. Email: david@autopian.com
Read All My Posts »
PrevPreviousThe 2023 COPO Camaro Is A Factory-Built Drag Car With A Screaming 10.35-Liter Big-Block V8
NextWhy This Banged-Up 1980 Chevy Malibu Is Insured For A Million DollarsNext