Facebook-f Twitter Instagram Rss
Menu
Menu
Home » Here’s How Badly Rusted A Porsche 911T Has To Be To Cost Under $9,000

This is one of those things were it’s not really telling you something new; we all know air-cooled Porsche prices have been absolutely clamshit over the past few years. This is known. And yet, somehow, despite being so well aware of all of the madness, I can still feel shock when I see it happen, right here, in the same current reality that brought us Ye being super into a former German former landscape artist and later politician named Adolf Hitler and the majesty of Milf Manor. Reality is weird right now, for so so many reasons. And yet, when I see an incredibly rusty canoe-shaped object made of Porsche 911 parts and a lot of boxes of other, even more disassembled parts selling for $8,600 on Bring A Trailer, I can’t help but still feel surprised. Like deliberately stepping on a rake and being shocked when your face gets smacked by a cruel wooden handle. 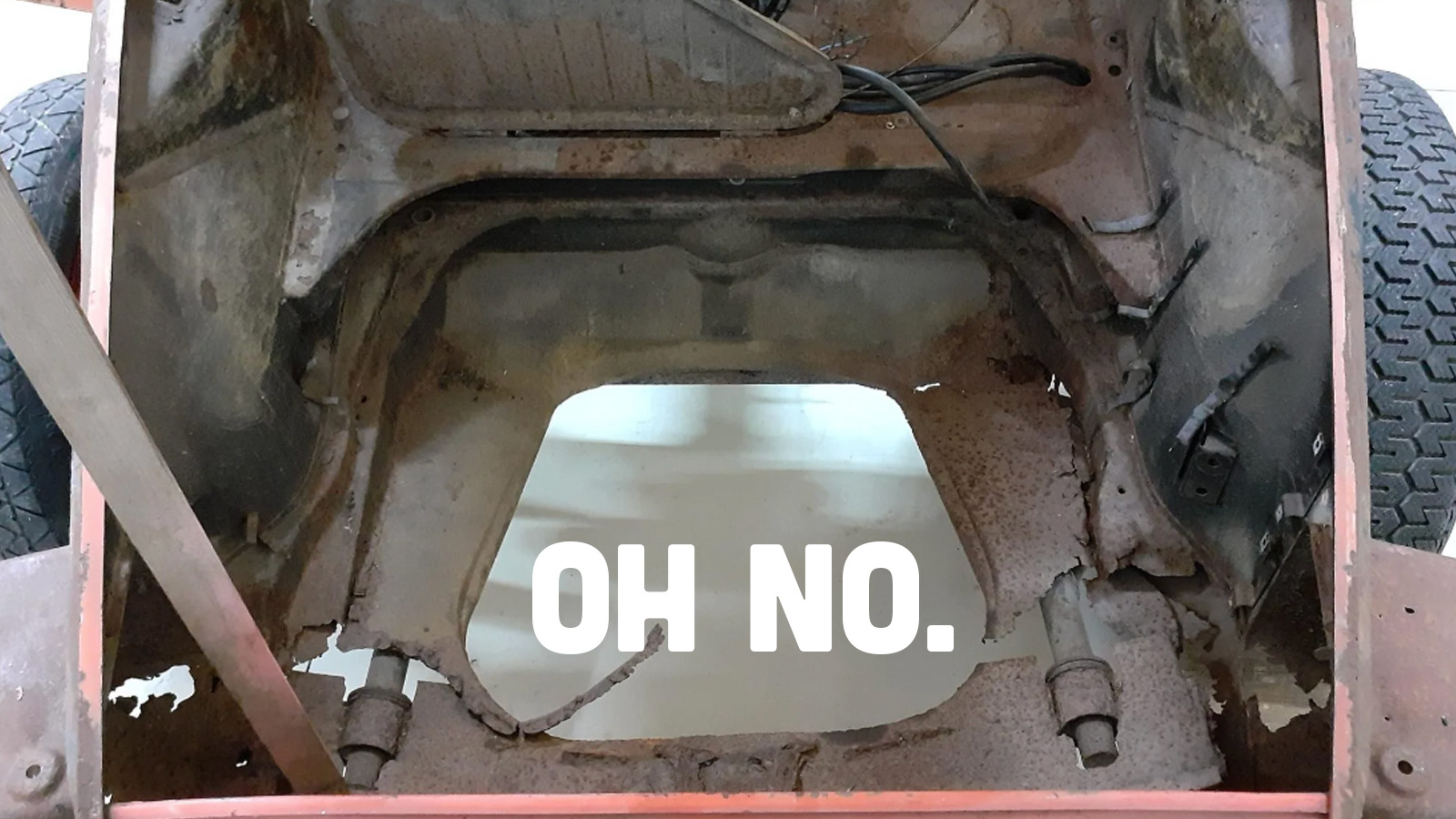 Let’s just take a look at this 1969 Porsche 911T Targa Project, and keep in mind just how much work that word “project” is doing. Because it’s doing so much work I think it might unionize. Here’s a few quotes from the description:

The exterior left the factory finished in Tangerine (6809), and areas of fading, rust, and panel repairs can be seen along the body. The car retains its doors and quarter panel windows, and the front fenders, rear bumper, and engine hood are missing.

Multiple interior components are missing, including the floor panels. Rust-through is present throughout.

Rust and multiple areas of rust-through can be seen on the underside. The front trunk floor panel is missing.

I also like that the title situation is noted as

The North Carolina title is noted as “Inoperable Vehicle.”

…yeah, no shit. At this point even calling this collection of metal a “vehicle” is being generous. 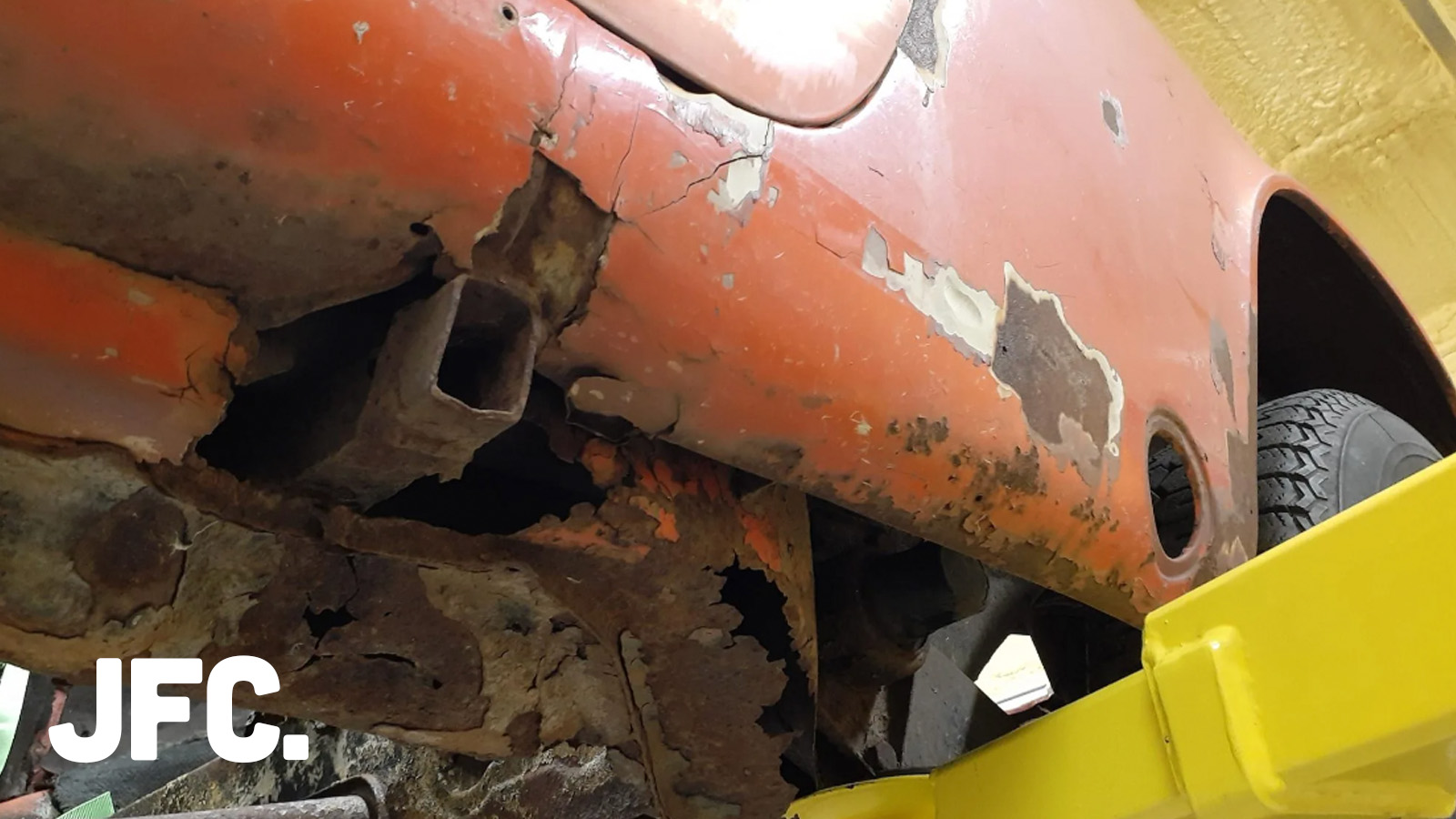 Now, that all said, it’s not like I don’t think someone couldn’t get this thing back together and on the road and absolutely lovely. It’s possible, but you’d effectively be rebuilding an entire car. If you could do it, sure, it’d be worth a lot, like this 1969 Porsche 911T Targa that sold for $93,000 on Bring a Trailer a few years back. Sure, that would be about a tenfold return on the money, which is great. But, in this case, I’m not even sure a return like that would let you break even, especially when considering all the time and work involved. It’s dizzying to even think about. It almost feels like you’re just buying a VIN and agreeing to haul out a lot of scrap metal for someone. 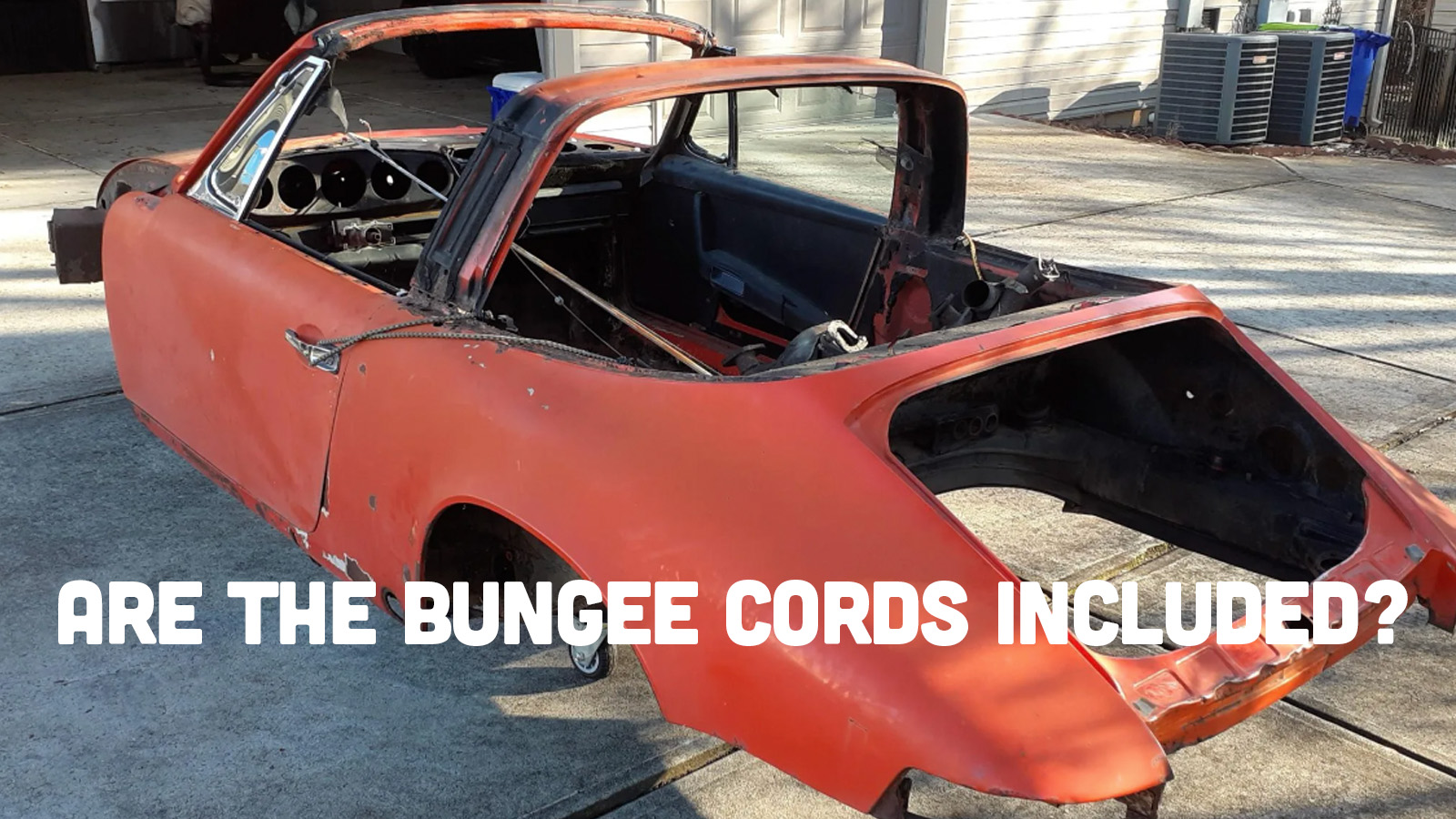 Of course, the many, many comments on the listing have been predictably entertaining. From the not-sure-if-they’re kidding: 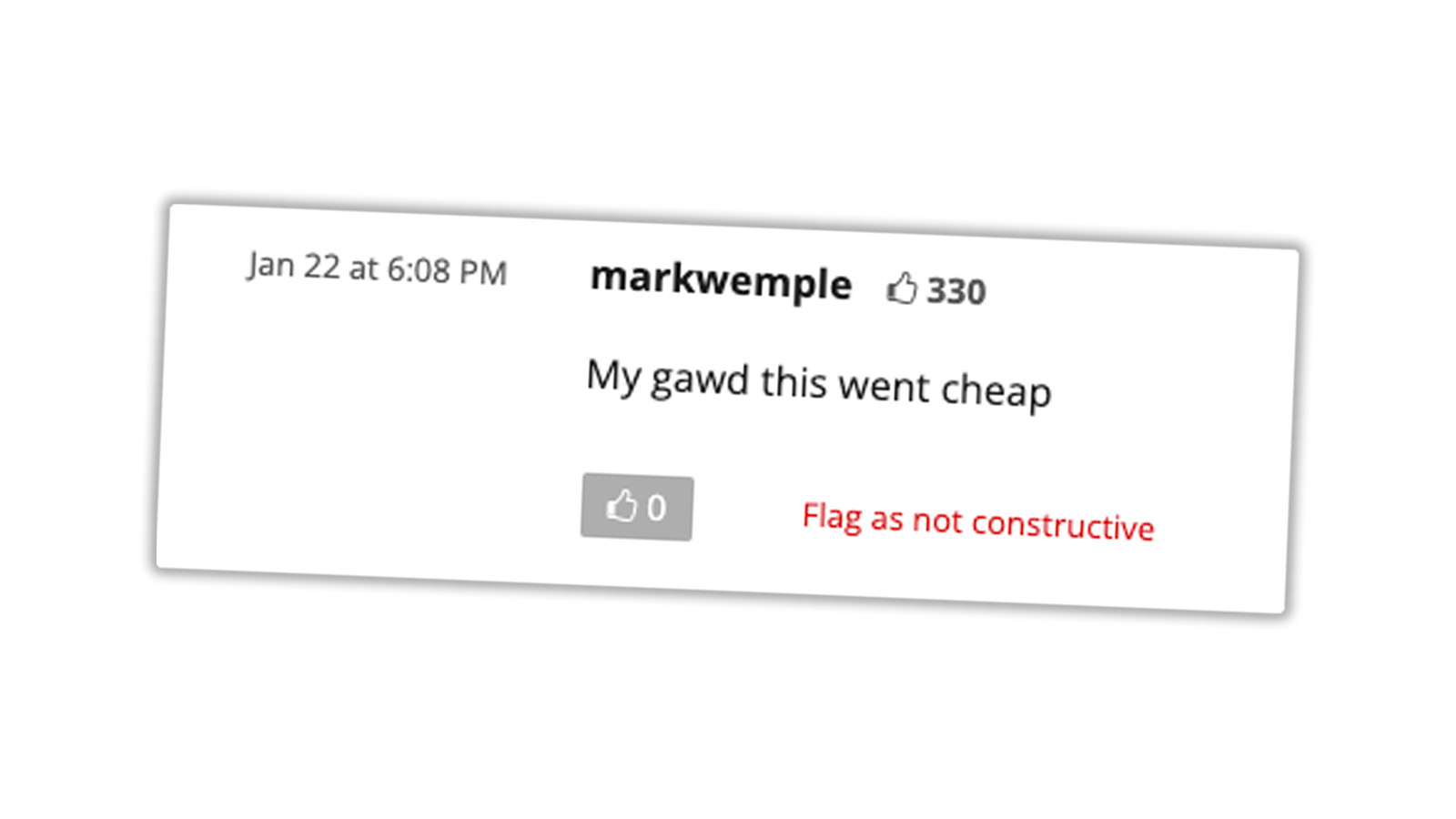 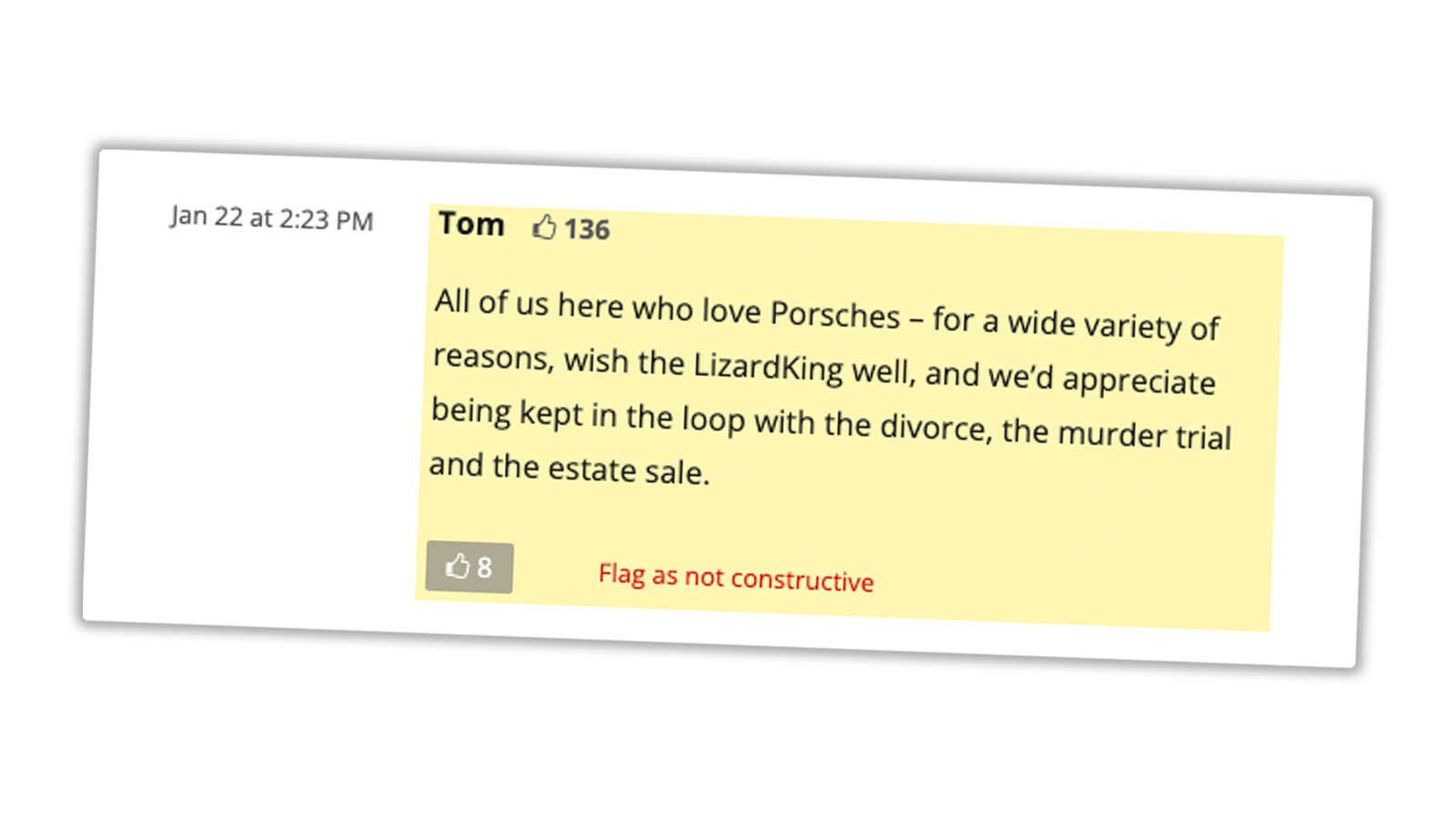 …to the just funny: 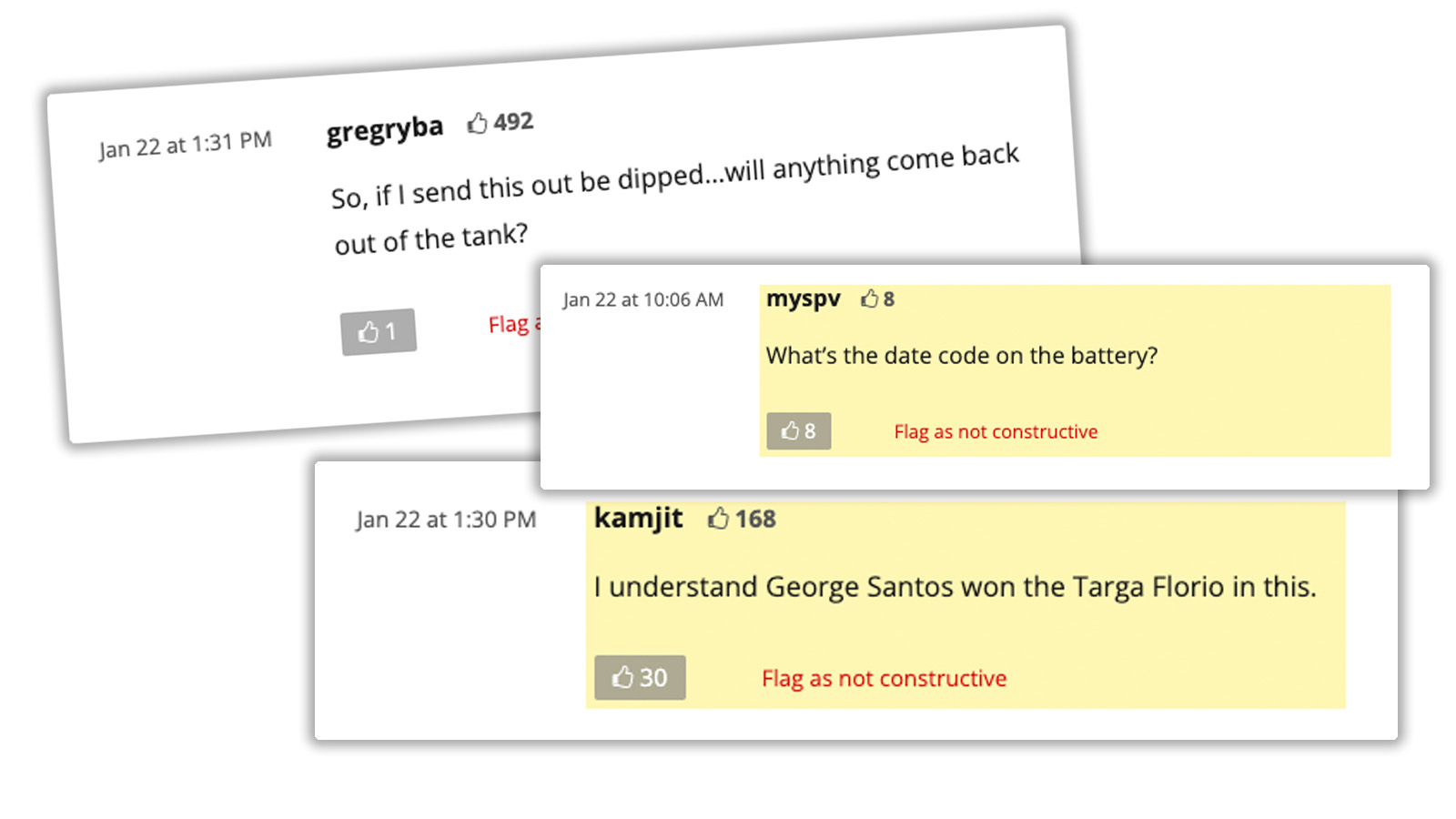 Because of course people are going to be fascinated by this and want to say funny things and be a part of the madness because it’s absolutely intoxicating, the madness. It draws you in. Nothing about this basket case suggests to any rational human that yes, this is worth pouring in a colossal amount of time and money to essentially re-build, from perhaps worse than scratch, an entire 1969 Porsche 911T. But there is no rationality here. Any hint of rationality was driven away by that Porsche badge on the hood, or at least it would be if the badge existed on this car, which it does not seem to. 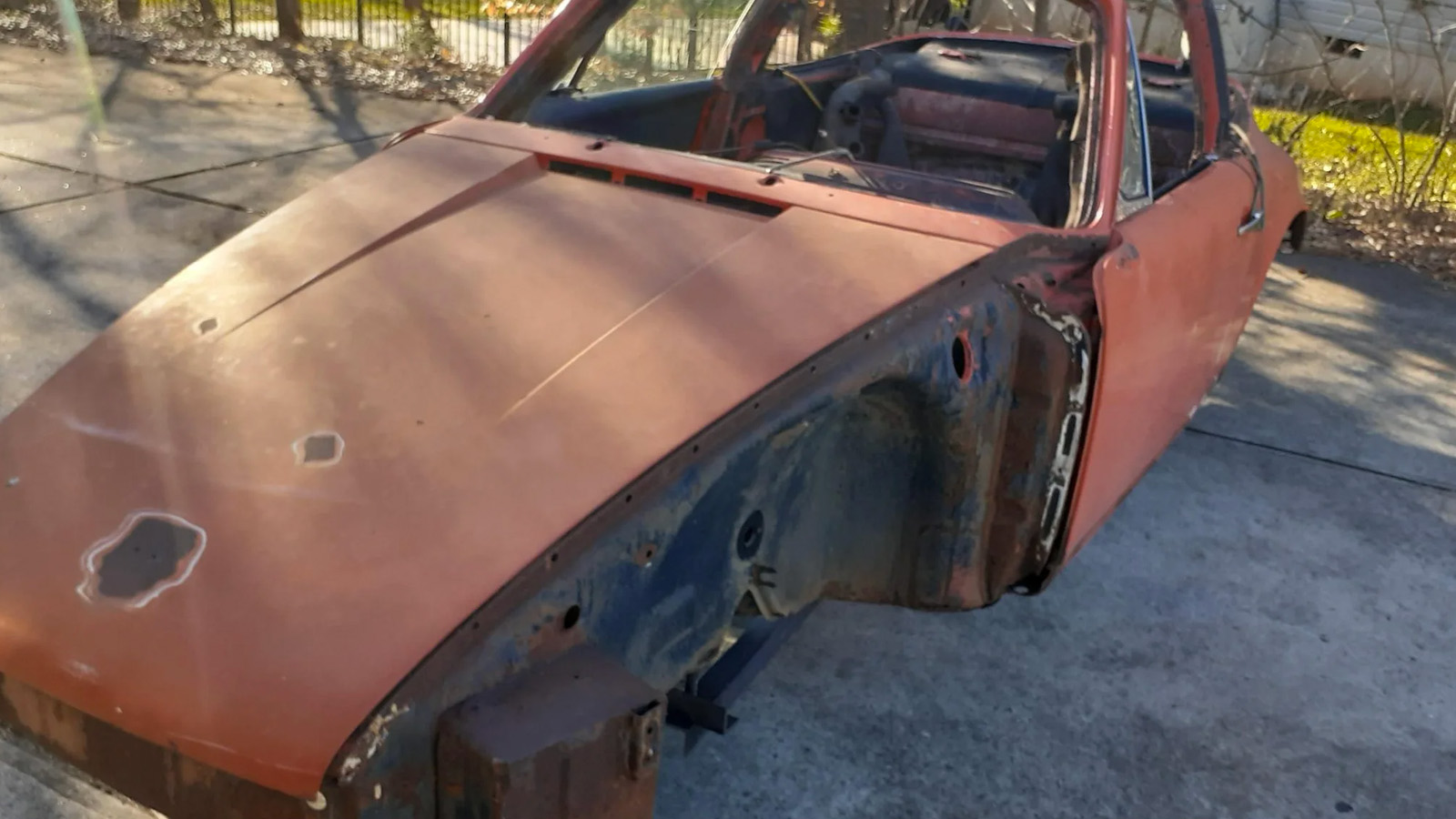 Yeah, just a rusty patch where it would be.

$8,600. That’s a lot of money. You’re paying almost nine grand as a down payment on so, so much more of your money going away. There’s so little of the car there, and what little there is seems to be eaten away by rust. Again, I can imagine this being a labor of love for someone, and the end result being incredible, and someone absolutely enjoying the process, but $8,600? 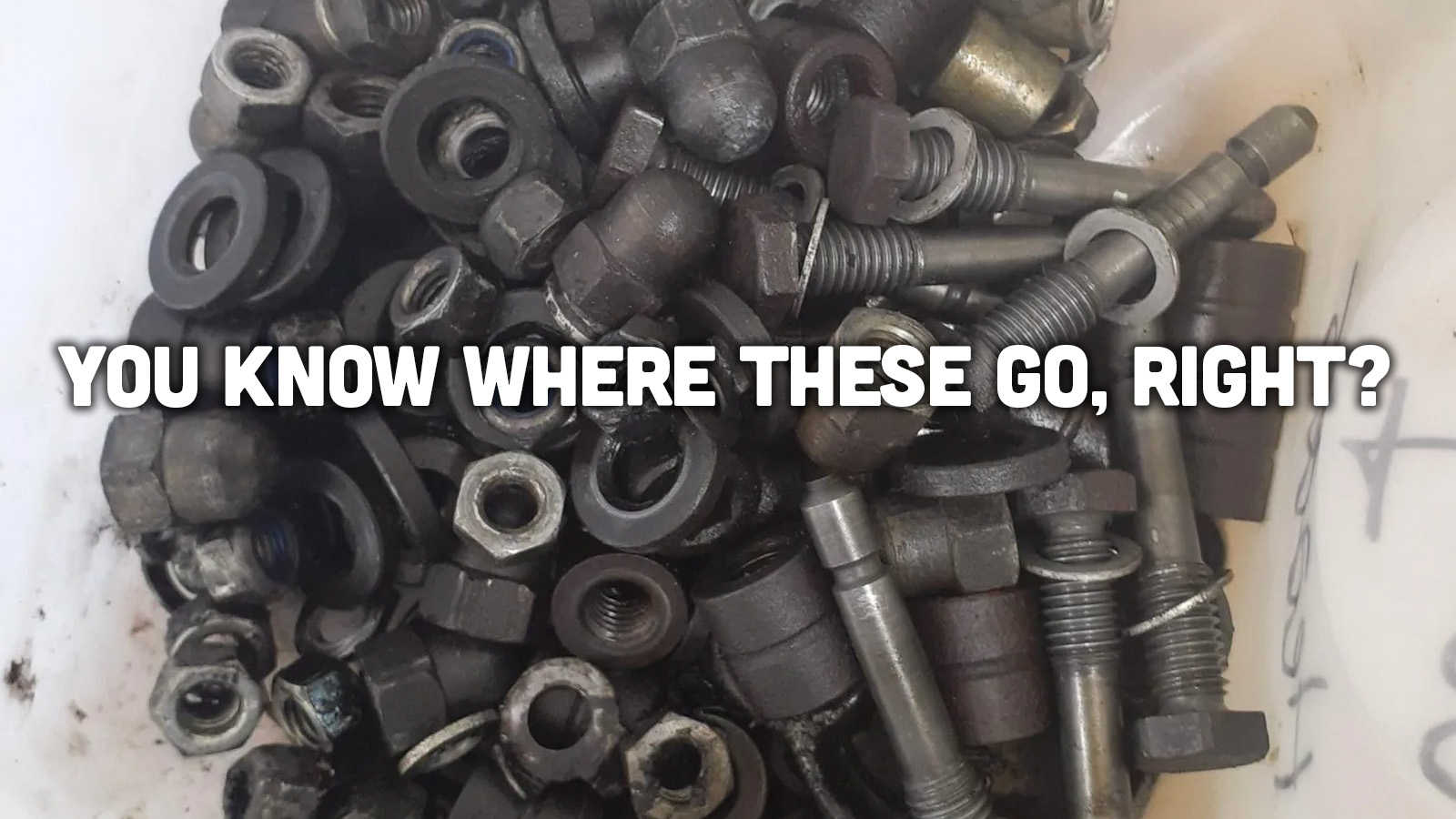 It’s also a good reminder that you don’t have to buy a Porsche 911 to enjoy some fun classic, sporty, rear-engined motoring. There’s so many other charming and interesting options out there, and while, sure, most don’t have the performance chops of a 911, who really gives a shit if they’re fun to drive? I mean, what is someone planning on doing with this thing when they finish it, winning races? Is that the goal? Because there’s so many better ways to get there.

I’m just saying that you don’t have to play into the madness. Just, for a moment, consider these other fun options before dropping nine grand on 1200 pounds of rust and despair.

Consider another fun rear-engined sporty car, like a Fiat 850 Sport! 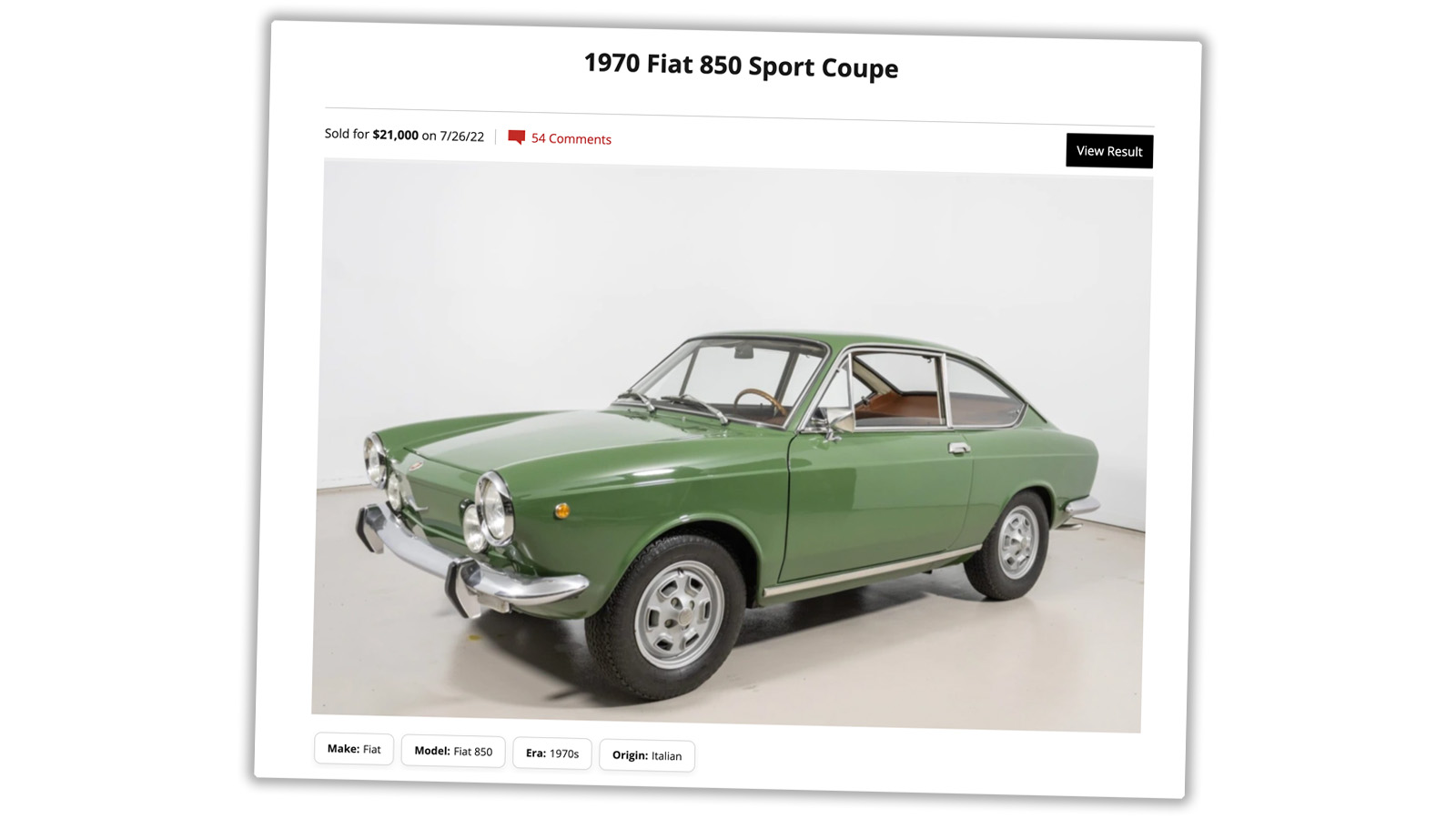 Look at that thing! It’s charming as all hell! It’s fun to whip around, and you’ll have less of a risk of getting your license revoked! It’ll oversteer like a 911, and it’s more unusual and, you know what, more interesting! That very nice, near-perfect one sold for $21,000. Less than three times the price of the vaguely 911-shaped tetanus-delivery system up there, and you can jump right in and drive.

Not enough power? Your lust for speed is too demanding? Okay, fine. What about a Renault Alpine? 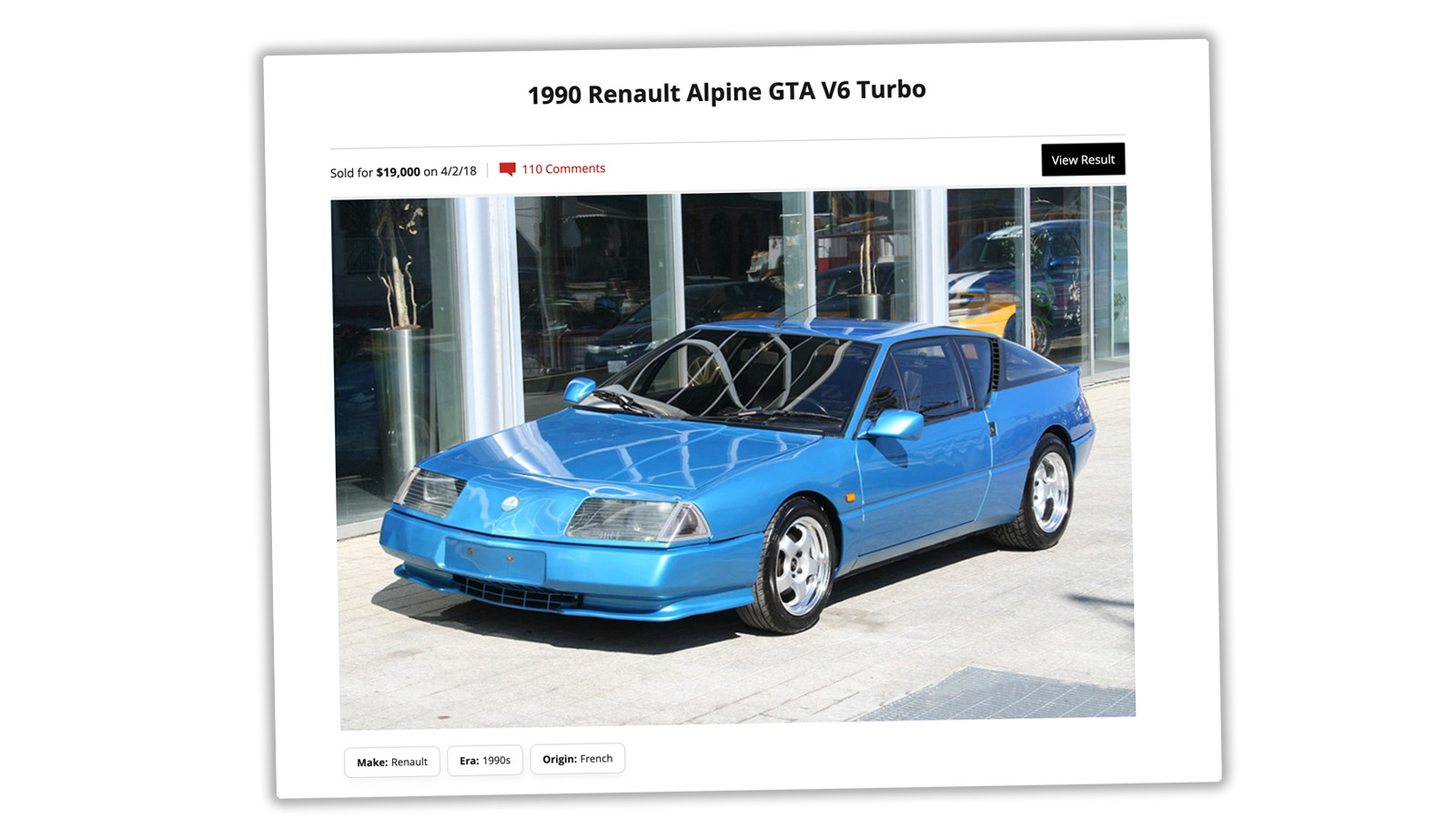 It’s always called France’s 911, right? It’s a genuine rear-engined sports car, and the V6 turbo ones are quick! It looks cool, it’s unexpected, it’s a real car in every way, and it’s made of metal and paint instead of the vague memories of metal and paint like that 911T. Barely over twice as much, for like 10x the amount of car you get. Why be miserable? 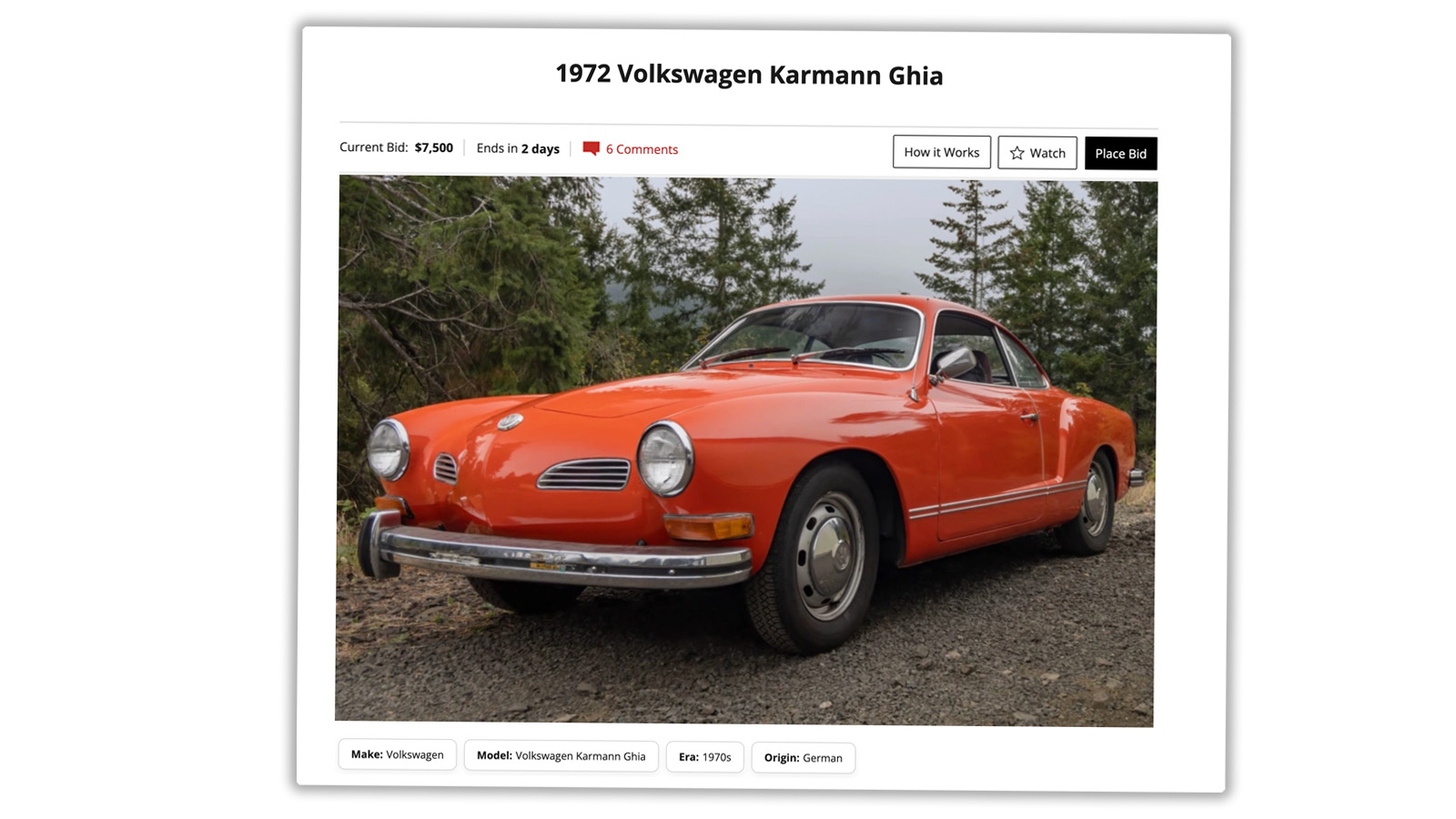 Okay, one more idea. Say you absolutely have to drive something Porsche had a hand in. Fine. Why not a Volkswagen Karmann-Ghia? It’s lovely, it’s German, it has an air-cooled opposed engine in its butt, and if you want to go fast, there’s a snacktillion different ways to get an old air-cooled VW to be quick, from building a big VW engine with a turbo to plopping in a Subaru or, hell, even a 911 flat-six back there. You could do so so much for less money than it would take to even get that 911T fully covered in body panels and not able to be stopped by a citizen of Bedrock. This Ghia needs a little bit of detail work but it’s only $7,500!

I’m all for project cars, and labors of love, but this, this is just ridiculous.

I'm a co-founder of the Autopian, the site you're on RIGHT NOW! I'm here to talk to you about taillights until you cry and beg me to stop, which I absolutely will not. Sorry. Hug? Also, David's friend.
Read All My Posts »
PrevPreviousThis Might Be The Upcoming Toyota Tacoma
NextFor Just Two Years You Could Buy A Practical Mazda Sedan That Hit 60 MPH In Under 6 Seconds: Holy GrailsNext