For Just Two Years You Could Buy A Practical Mazda Sedan That Hit 60 MPH In Under 6 Seconds: Holy Grails 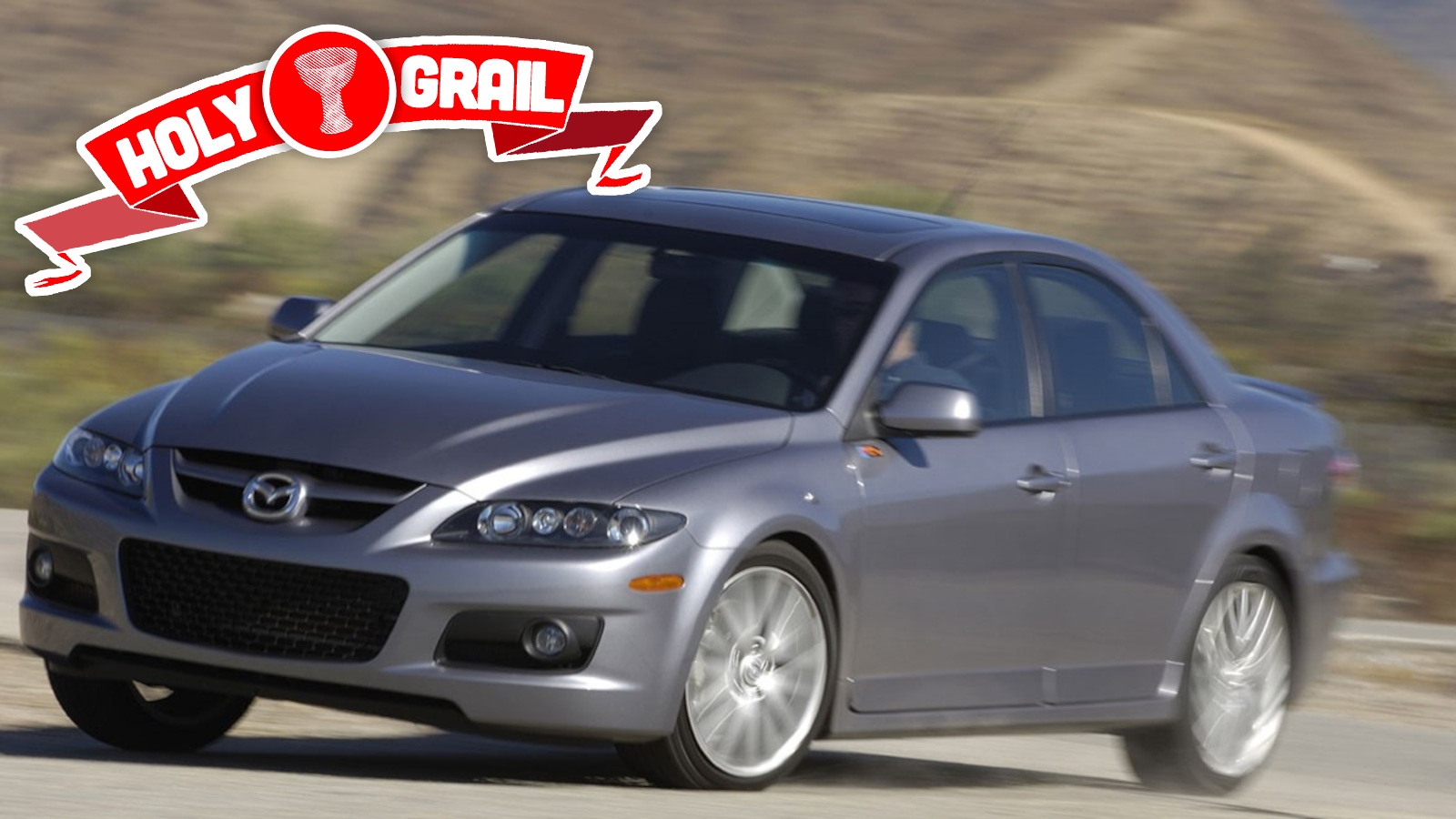 In 2006, car buyers in America could bring home a turbocharged four-cylinder sedan that made 274 horsepower, 280 pound-feet of torque and was capable of reaching 60 mph in around 5.5 seconds. This sedan also came with a manual transmission and all-wheel-drive. If I asked you to guess what car I was talking about, I wouldn’t fault you for guessing something like a Mitsubishi Lancer Evolution. But this was no Mitsubishi. The Mazdaspeed6 is arguably the fastest and best-handling sedan ever put out by Mazda, and it was made for just two years.

Welcome back to Holy Grails, the Autopian series where we show off some of the coolest, most underrated cars that you love. I have to be honest with you, dear readers. Through this series, I’ve learned a lot about cars that I never knew existed. You’d think that with my serial Volkswagen ownership, I would have known about the Jetta SportWagen SEL, but I didn’t. A lot of unique cars seem to disappear into the pages of history, and this series exists in part to highlight them.

While not an official entry in this series, last week I wrote about the Duntov GT. This car–a 1987 Cadillac Brougham with a tuned Corvette engine making 370 HP–was submitted over a month ago by a reader named Jonathan. The Duntov GT was a grail in perhaps the purest sense. Just one of them was ever built, and for the most part, its history was lost. Thankfully, we were able to find one of the vehicle’s builders, who gave us the story of such a cool car. We often think of the Malaise Era as putting out blocky cars with huge, choked-out (i.e. riddled with emissions equipment that hurts performance) engines. The Duntov GT bucked that trend and was even intended to be a vehicle sold to the public, with its builders getting the car emissions certified. Alas, it wasn’t meant to be.

We’ve been focusing a bit on Fords and VAG products lately, and today’s entry will change that (sort of — the engine is a boosted version of the MZR, which Ford also offered as the “Duratec”). This is the Mazdaspeed6, and it’s a sedan that fights above its (3,600 pound) weight class. 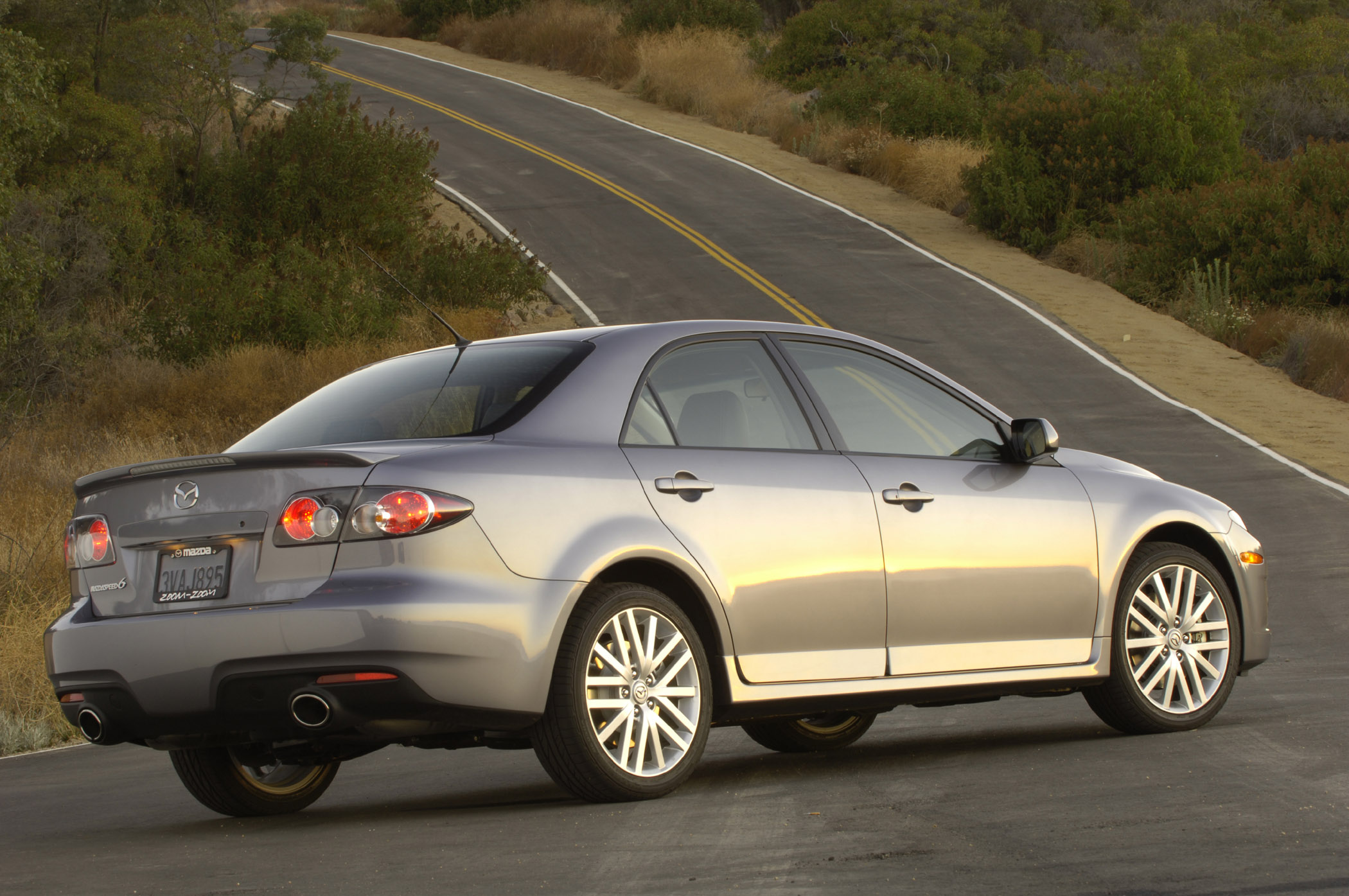 Mazda says it has a long history of flagship sedans that eventually lead to the Mazda6. Launched in 1966, the Luce (pronounced loo-chay) was Mazda’s top-dog sedan, and it joined a lineup that included the Carol Kei car, Familia compact, and Capella mid-sizer.

In export markets, the Luce was branded as the Mazda 1500 or the Mazda 1800. Americans got to enjoy it for just three model years between 1971 and 1973. This car was a looker–the show car was penned by Giorgetto Giugiaro–but not very quick. 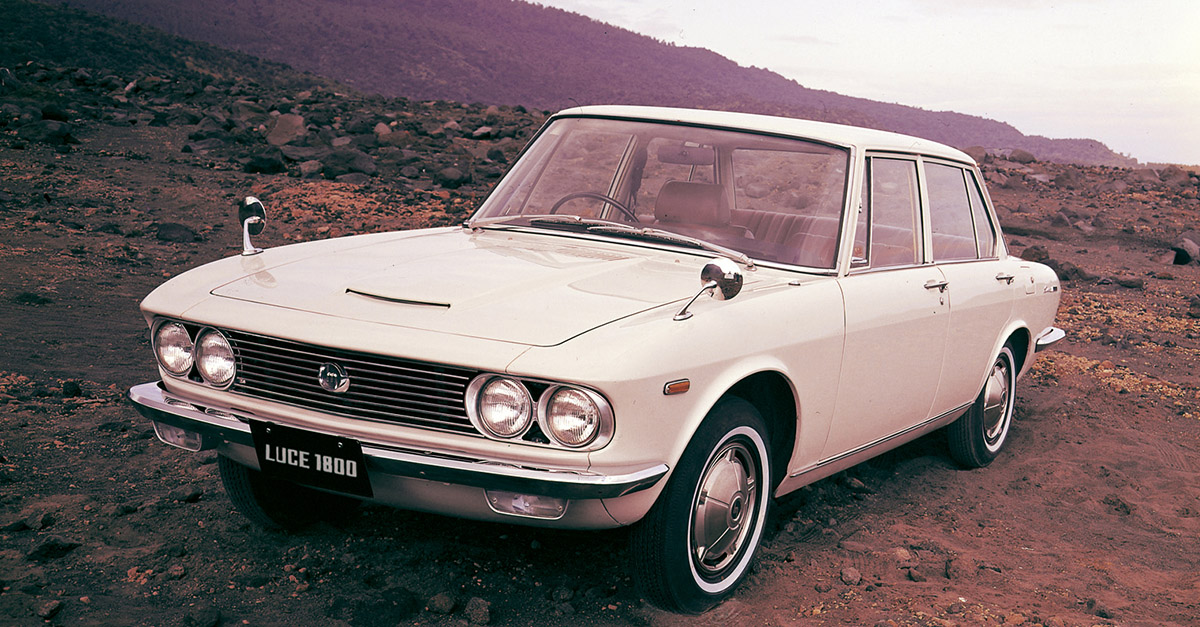 It accelerated to 60 mph in 17.5 seconds before completing the quarter in 20.5 seconds. This sedan could be a grail on its own; if estimates on Barn Finds and Bring A Trailer are close to accurate, just a couple of thousand ever made it here.

While the first Luce was still on sale, Mazda released the second-generation of the Luce and its first rotary-powered sedan. The RX-4 was available as a sedan, coupe, and wagon. The automaker notes that it went a bit nuts with rotary engines in the 1970s and filled its lineup with them. 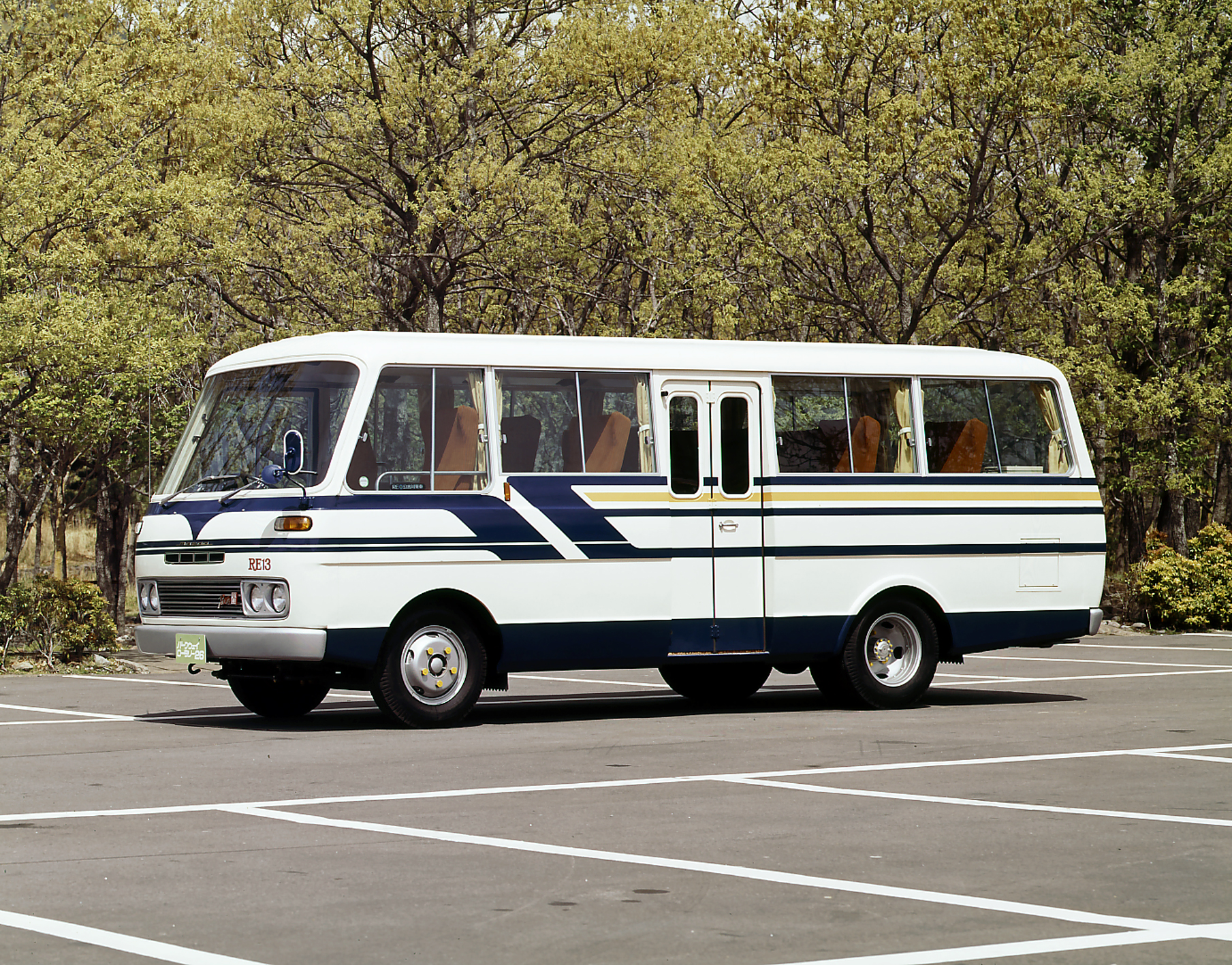 Indeed, rotary engines found homes in everything from the Cosmo coupe and the Rotary Pickup to even a minibus (see above). America got the RX-4 from 1974 through 1978 and our version had a 1.3-liter 13B Wankel making 110 HP. Production ended in 1977.

From here, Mazda notes that its flagship sedan took a turn towards luxury. The 929–as we know it in America–arrived in 1986. It had two generations without sales in America. By the time it came back, it had grown into a stately sedan with features like heated seats and oscillating vents. Mazda even offered an optional 3.0-liter V6. The automaker continued down this path of luxury sedans with another 929 and eventually, the Mazda Millenia: 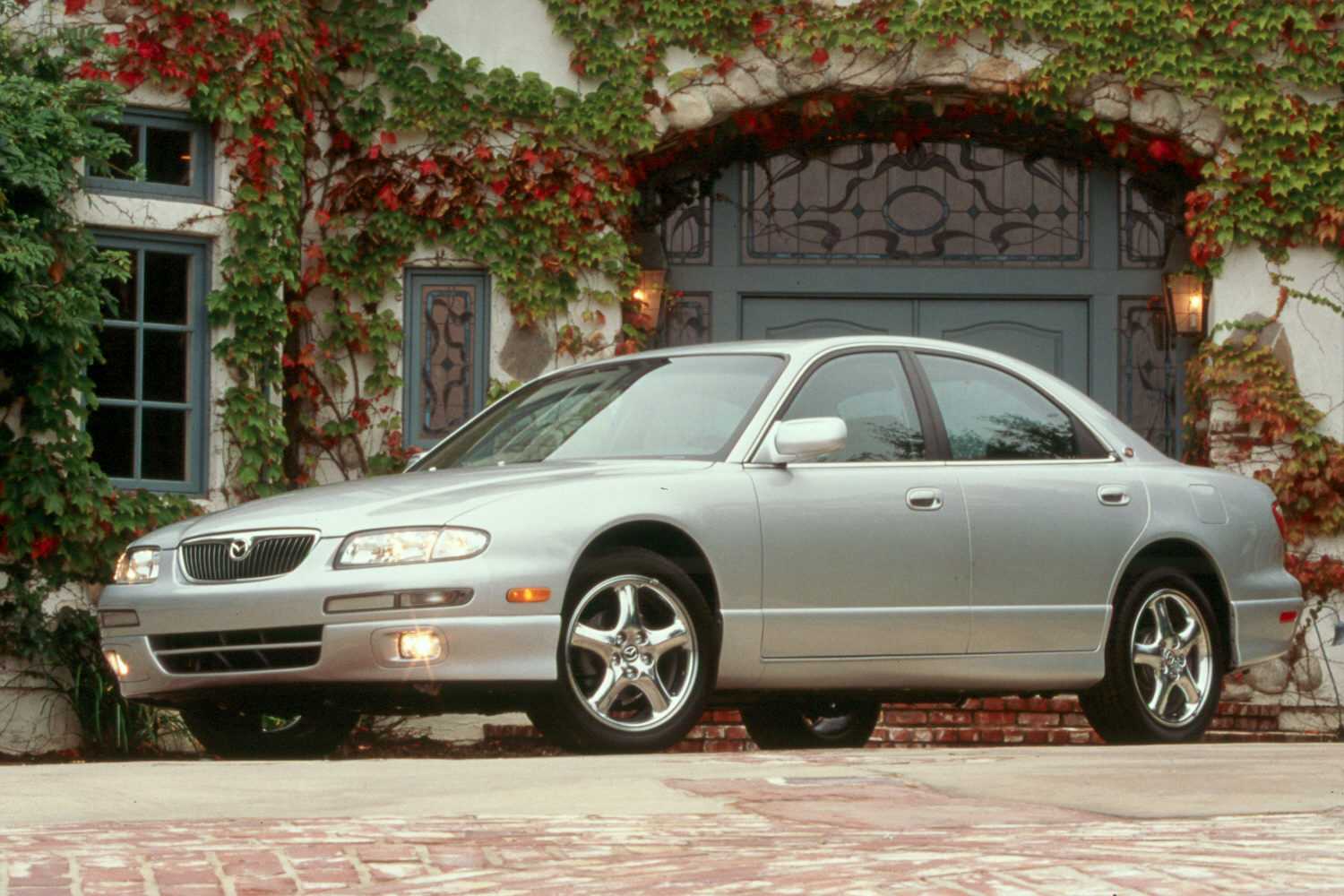 This car focused hard on quality details, and a highlight included a 2.3-liter Miller Cycle V6. I’ll let Mazda explain why this engine is different:

The Miller Cycle, which is similar to the Atkinson Cycle, keeps intake valves in the engine open longer than normal in order to facilitate smoother airflow throughout the engine—learnings still used in today’s SKYACTIV engines and tomorrow’s SKYACTIV-X compression-ignition engine. The engine won a Wards 10 Best Engine award four years in a row.

That brings us to the Mazda6. Launched in 2003, Mazda says this car combines what it learned in building flagship sedans with the 626 mid-size sedan. The result was a mid-size flagship with tons of character and some driving excitement. Mazda sold these in a variety of flavors, which included a sleek wagon. 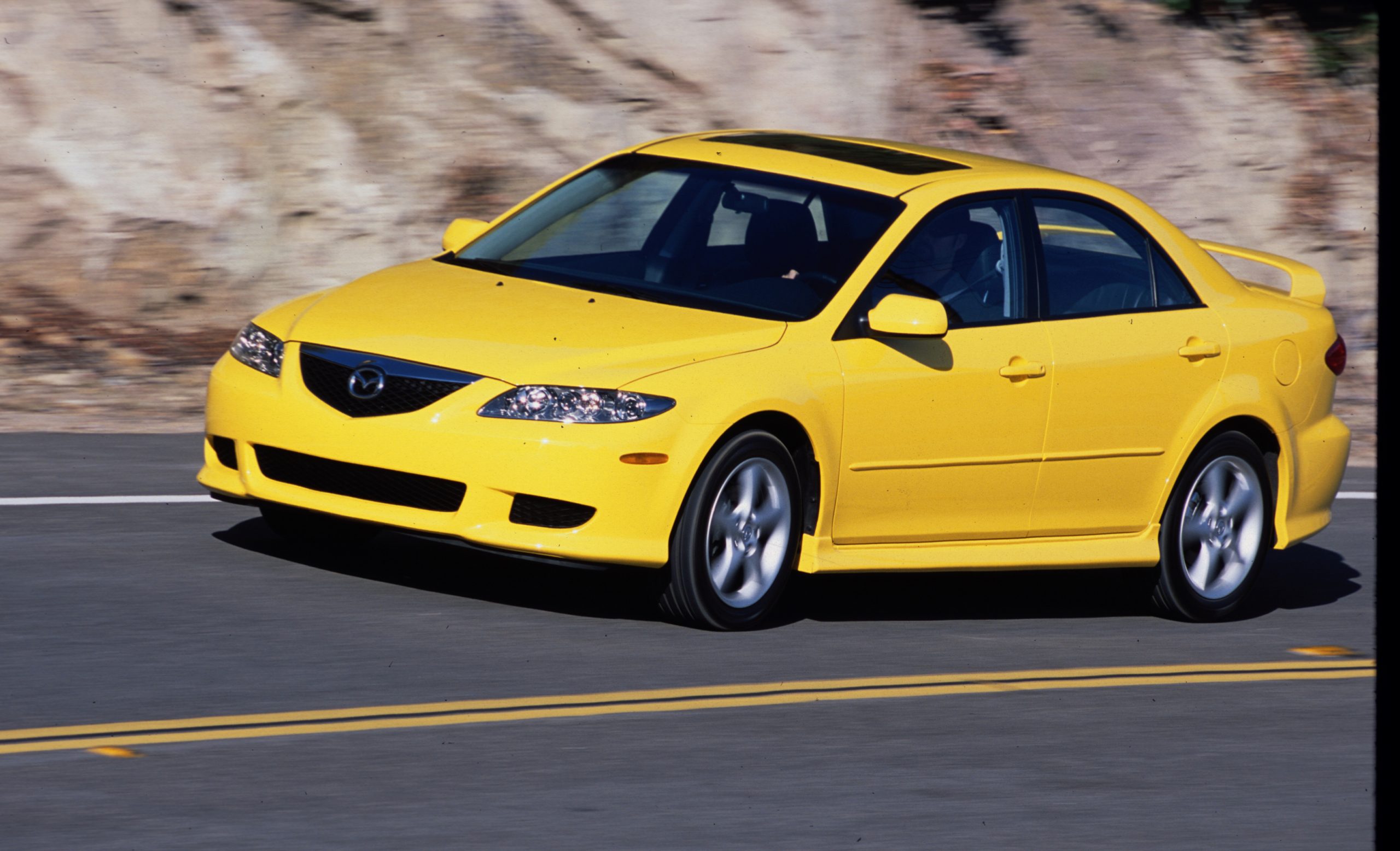 For reader Ian, the one you want is the Mazdaspeed6, a car that appears to be the fastest sedan Mazda’s ever made. I love how Ian even included bullet points for us:

Only available for two years, it was the hot version of the tepid Mazda 6 of the period. It came with AWD, a turbo MZR engine of around 270hp, sport suspension and a close ratio 6 speed manual transmission (no auto available).

I bought a 2006 as a stand in winter car/DD in around 2010 when my Ford truck had engine issues. It was so much fun that I kept it for three years before selling it for the same price I bought it for. It was very similar to the Audi S4 in terms of performance at a Mazda price.

Downsides:
The MZR was known for cam phaser issues, which mine had and the local scummy Mazda dealer wouldn’t give me the extended warranty but Mazda Canada reimbursed me for it after the fact.
The otherwise great 6 speed manual had its ratios too close together – it would have been perfect in an RX8 but it wasn’t necessary with all that turbo torque.
The clutch also had a narrow engagement point which made it hard to drive smoothly without practice – my wife refused to drive it, even though she was pretty good with a manual in her Acura.
It had the ugliest hood since “Corvette Summer” because the intercooler ducting was in the hood.
Hard to find an unmolested car today
Mazda rust

Car and Driver gave an overview of this car in a review back in 2005. Back then, Mazda chief designer Peter Birtwhistle pointed out that the Mazdaspeed6 was not meant to be like a rally car-turned road car like a Mitsubishi Lancer Evolution or an Impreza WRX STi. 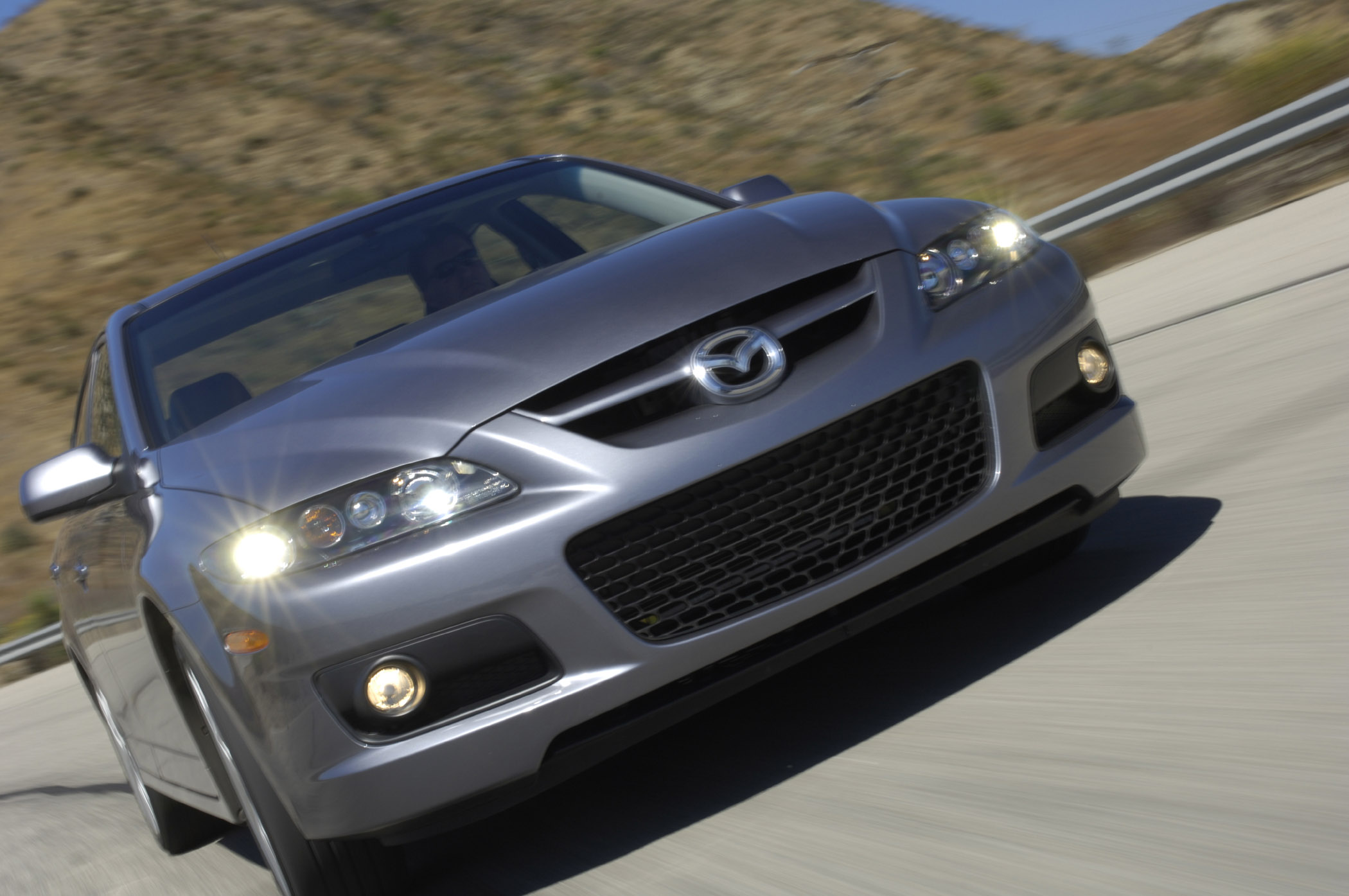 Instead, the competition was more of the likes of the Subaru Legacy GT and the Acura TL. Indeed, in Car and Driver’s track testing the magazine found the car to be quick, but not exactly a track weapon.

Power comes from a Mazda MZR 2.3-liter turbo four making 274 HP and 280 lb-ft torque. That goes through a six-speed manual transmission down to all four wheels through an active torque split all-wheel-drive system. The automated system can send up to 50 percent of the engine’s power to the rear wheels depending on the steering angle, wheelspin, and yaw. 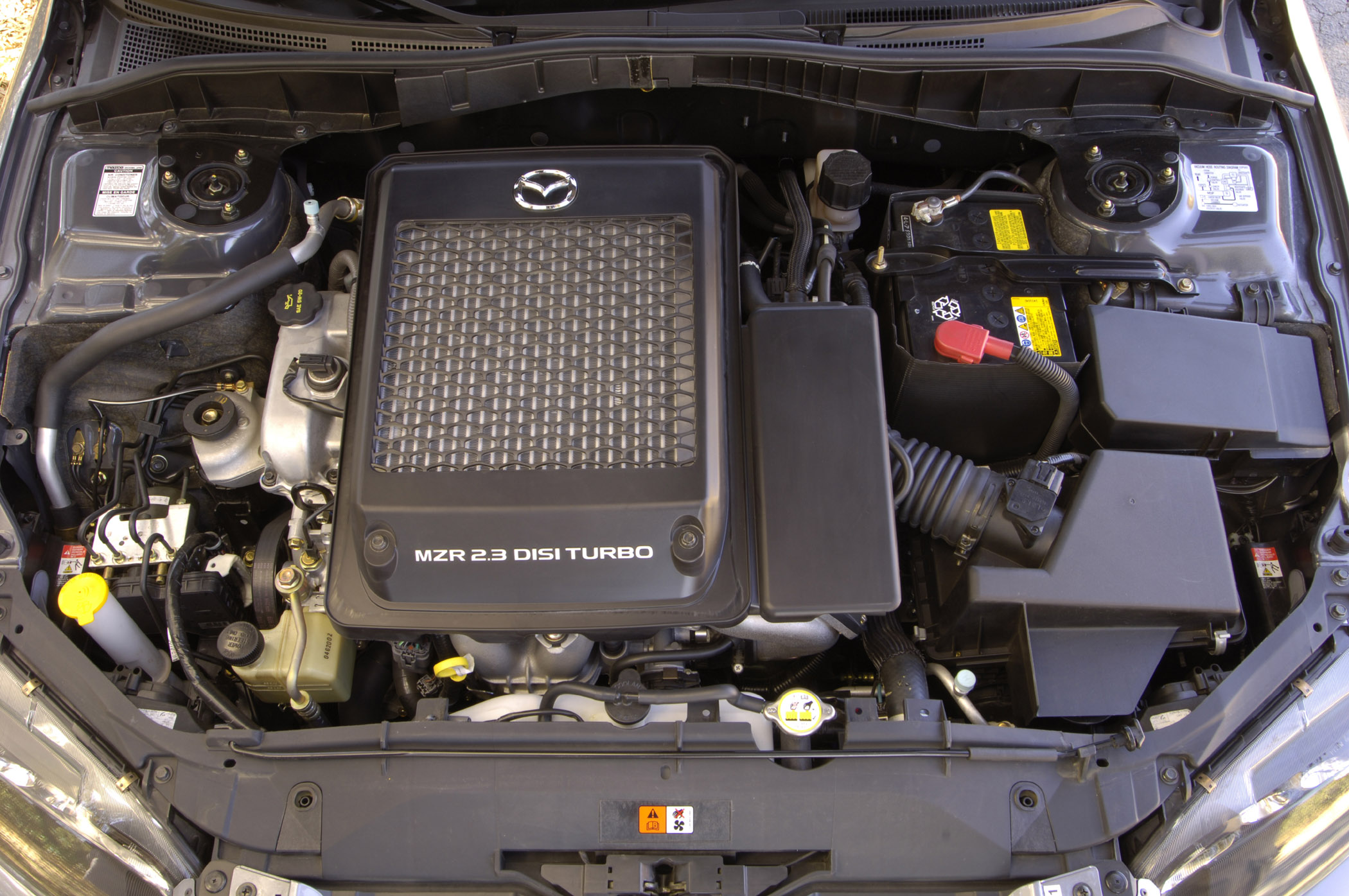 You also get an electric clutch in the rear and a limited-slip differential up front. Helping the Mazdaspeed6 boogie around curves are chassis stiffening, larger anti-roll bars, stiffer springs, and new bushings. Mazda says that this, along with steel reinforcements, stiffen twisting rigidity by 50 percent. Apparently, the reinforcements mean that the rear seat doesn’t fold.

When MotorWeek tested the Mazdaspeed6, testers got the car up to 60 mph in 5.8 seconds and found the power delivery to be linear. The Hitachi Warner turbo apparently spooled up with minimal lag and testers found it a joy to drive in traffic. Car and Driver notes that the car gets 15.6 psi peak boost from the turbo. That performance came paired to an aggressive body kit and a sporty interior featuring faux carbon fiber trim, aluminum pedals, and some stainless steel trim. 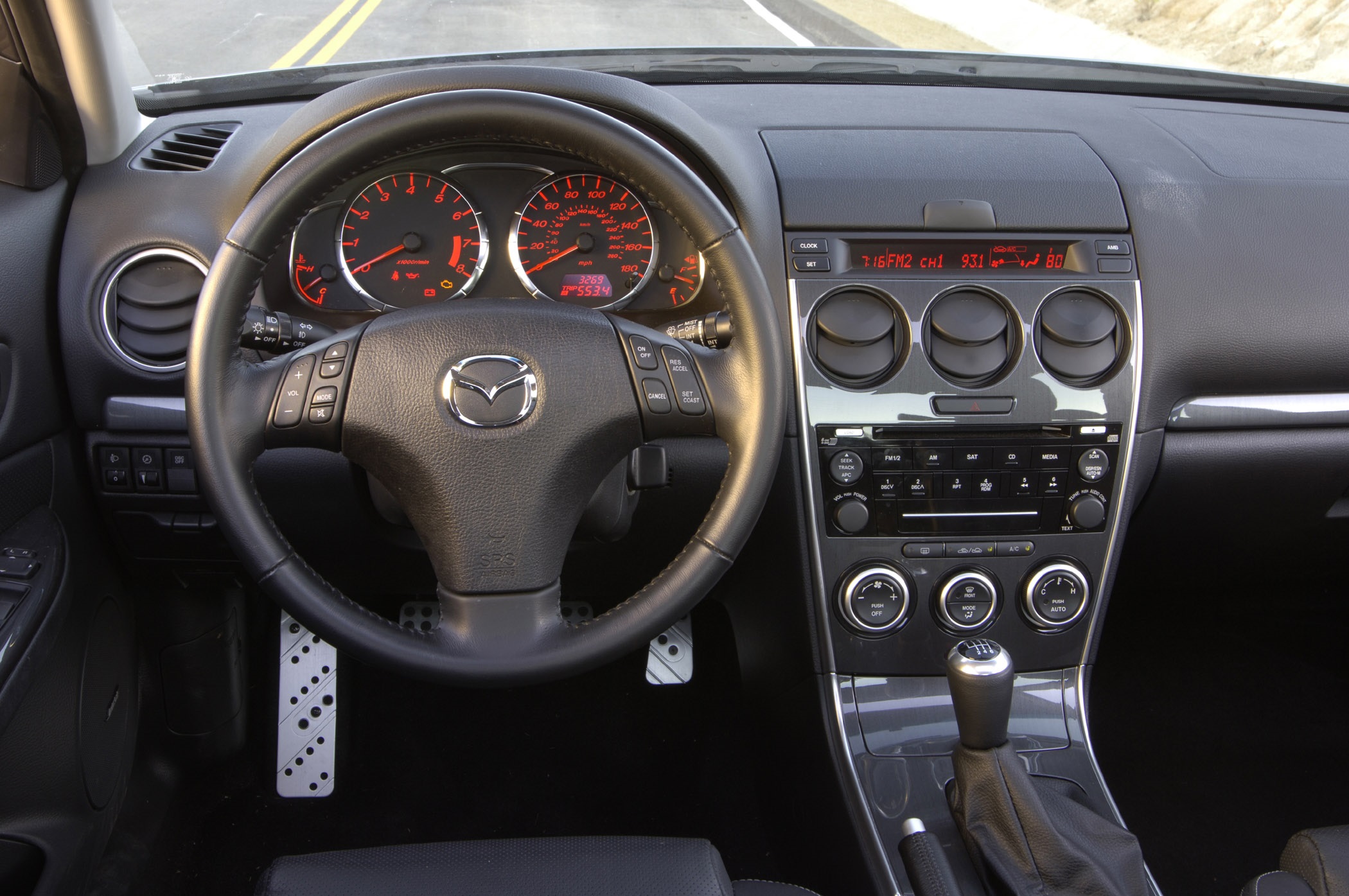 Yet, the car still carried some luxuries like automatic climate control and a Bose sound system. Base price was $28,555, with options like xenon lights, leather, and keyless ignition adding another $1,930.

The part that blows me away is how well these performance figures have aged. When the Mazda6 died off last year, it was making 250 HP and could accelerate to 60 mph in 6.1 seconds. Mazda also offered the Mazda6 with a V6 and even that was slower down a straight than this.

Indeed, Mazda’s interiors and design have both come a long way since the Mazdaspeed6, but the ‘Speed6 remains a quick ride. You can definitely get plenty of speed in Mazda’s spicy crossovers and in the Mazdaspeed3 hatch, but this appears to remain Mazda’s fastest sedan. To compare it to a car from another brand, my Saturn Sky Red Line could hit 60 mph in 5.2 seconds given a good enough driver. This is just a touch slower but carries two more seats and a sedan’s trunk along for the ride. 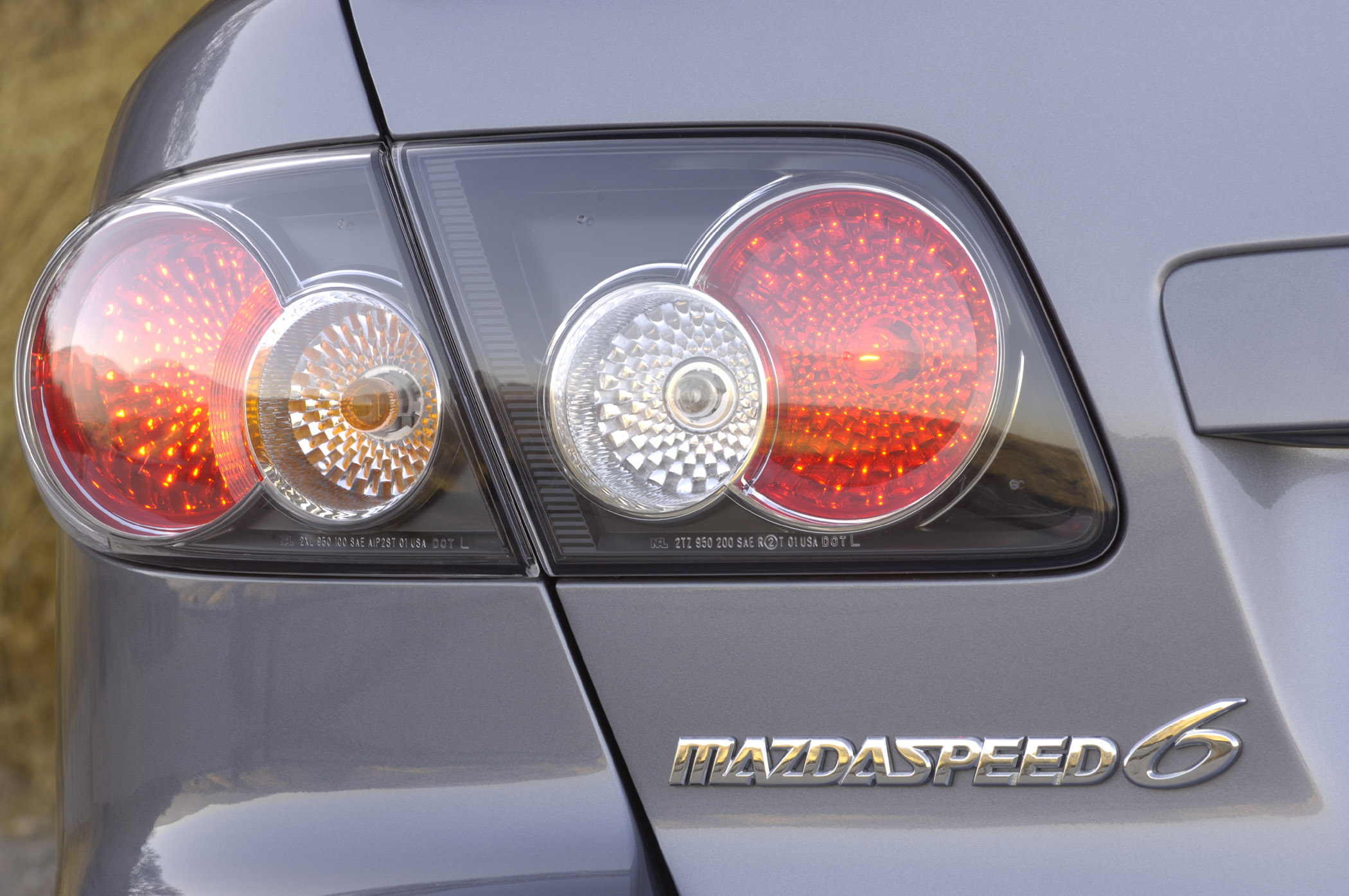 These cars were sold for just two years in America between 2006 and 2007. Estimates place production at around 5,000 units for the American market. That’s somewhat rare, but it seems that you won’t have a hard time finding one. I found nine for sale within 500 miles of me and all of them are under $10,000.

Do you know of a ‘holy grail’ of a car out there? If so, we want to read about it! Send us an email at tips@theautopian.com and give us a pitch for why you think your favorite car is a ‘holy grail.’

For Just A Single Year You Could Buy A Manual VW Wagon With GTI Power: Holy Grails

Ford Made A Version Of The Tempo That Actually Lived Up To Its Name: Holy Grails

Holy Grails: The Mercury Tracer LTS Was An Underrated Performer With The Body Of A Practical Sedan

Mercedes is a lifelong fan of all things powered by an engine. When she isn't driving one of her five Smart Fortwos or her 14 other vehicles she could be found in the cockpit of a Cessna 172 or perhaps swimming in any body of water that she could find. She also has a deep love for buses of all kinds. Please send her buses. mercedes@theautopian.com Instagram: @mistymotors Twitter: @Miss_Mercedes30 Facebook.com/neonspinnazz
Read All My Posts »
PrevPreviousHere’s How Badly Rusted A Porsche 911T Has To Be To Cost Under $9,000
NextThe 2024 BMW M3 CS Is A Hardcore Sports Sedan With All-Weather TractionNext