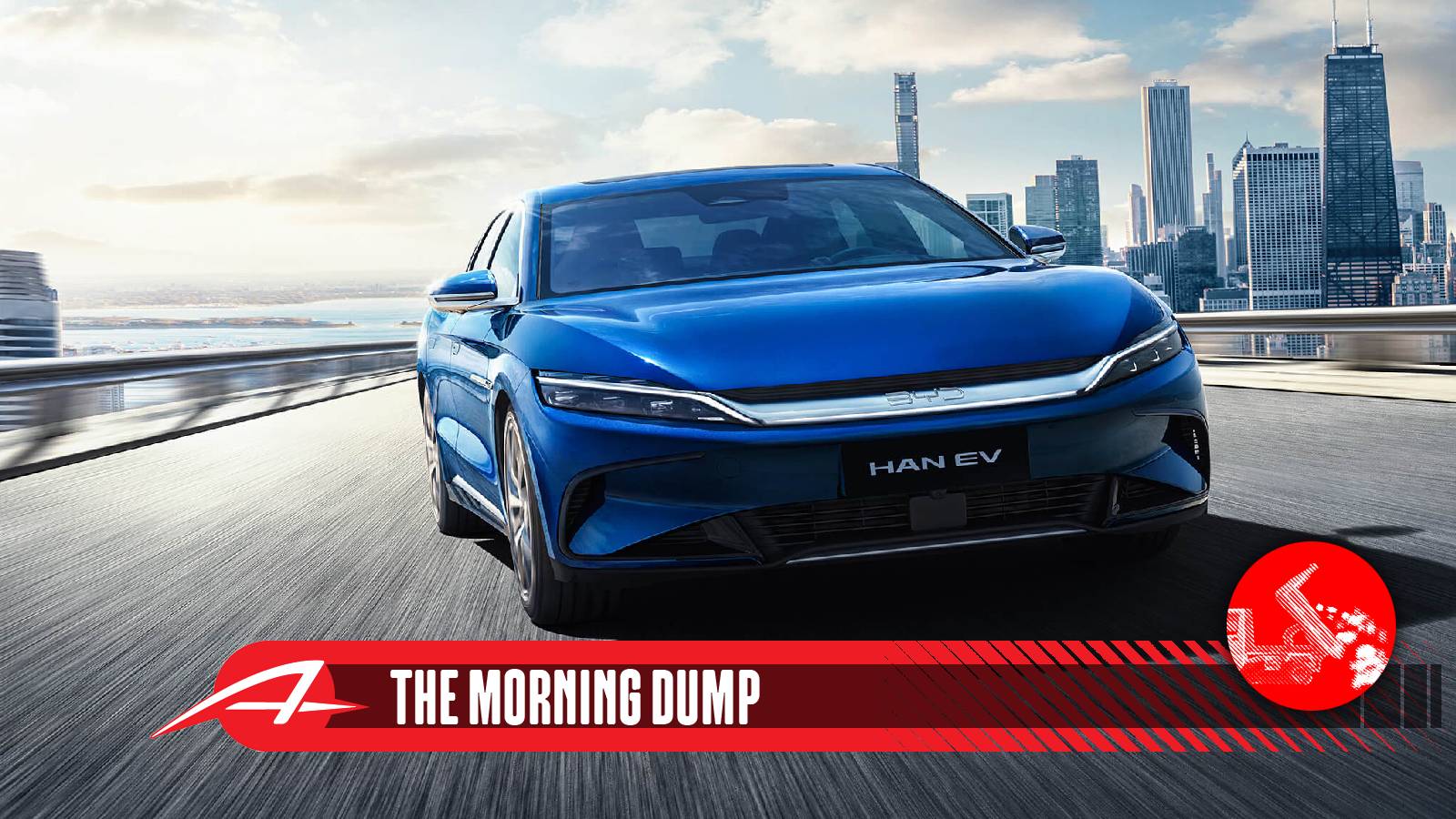 Welcome back to another edition of The Morning—I can’t say it. Talks over what to name The Autopian’s morning news roundup remain ongoing, but significant progress has been made in recent days; all parties involved are confident they can reach a deal soon, according to sources familiar with the matter.

While deliberations continue, today’s dispatch brings us news about what really happened to BYD in America, more complications in this country surrounding the Chinese auto industry, and more headaches for Ford over its disastrous dual-clutch transmission from a decade earlier.

Grab the keys to the BYD Han EV you (probably) don’t own and let’s hit the road!

A year ago, it seemed like nascent Chinese automaker titan BYD—the world’s biggest maker of “electric vehicles” ahead of Tesla if you also count plug-in hybrids—was pretty well-positioned to take on the difficult but crucial U.S. market. It was looking at setting up dealer networks and advertising campaigns. Executives were sure they had the right stuff to take on Tesla here; they saw themselves on that level, not as some budget brand like Hyundai did when it started out.

As we get 2023 well underway, it’s crickets now from BYD. What the hell happened? Reuters has the scoop today, and among other things, the answer is the Inflation Reduction Act: the new Biden Administration legislation that prioritizes U.S. EV and battery manufacturing for maximum tax incentives. That, and the generally difficult state of U.S.-China relations. From that story:

[Sources] described the study as advanced and serious, with specific recommendations from Detroit-based consultancy Urban Science on how many outlets in each state and city BYD would need, as well as formats for the brick-and-mortar stores.

The momentum was building towards an announcement at this year’s global CES tech show in Las Vegas, where BYD was planning to showcase a new generation of battery electric vehicles (BEVs) and plug-in hybrids for the U.S. market, a BYD official said.

The announcement never came. Tense relations between Washington and Beijing, anti-China sentiment in the United States and President Joe Biden’s move to prioritize home-grown production of EVs and batteries all pushed BYD to hit the pause button, one of the sources said.

BYD’s management has yet to give the project a final green light and an aggressive U.S. expansion remains unlikely for the foreseeable future, the source said.

“BYD is taking a cautious approach to the U.S.,” the person said. “Think about all the U.S.-China political tensions and then think about the craziness of the whole world now. You don’t want to jump into a big mess.”

One assumes China’s own challenging political situation at home, with surging COVID-19 rates and lockdown protests, isn’t helping either.

This is a really interesting story in that it also dives into how BYD executives knew five years ago that their EVs weren’t ready for global primetime in terms of quality and specs. That’s no longer the case, they believe, and since then the automaker has established a commanding lead in China and established big pushes into Europe, Japan, Australia and other markets.

But arguably, you haven’t “made it” until you’ve conquered North America, and the rules under the IRA already put BYD on the defensive—who would want to enter the EV game here now when so many competitors can offer $7,500 tax breaks and you can’t? It’s part of why Hyundai, Kia and the European brands are so livid about the law. And it’s made tougher for BYD, a new and unproven brand from a country whose cars American buyers aren’t remotely familiar with yet.

Don’t count BYD out forever, though. The story says America is still on its radar someday. And here’s Zhang Wei, founder of Yuanhao Capital Management and a big BYD shareholder, on why this company is such a manufacturing powerhouse:

Unlike many rivals, BYD can meet most of its battery and EV systems needs alone. It sources key battery materials in part from its mines in China and makes its own batteries and semiconductors, including the power-management chips that are crucial components in EVs, Zhang said.

“Other than windshields and tires, they can make on their own just about everything in the car. They have their own construction company that helps build factories. That’s how they can speed things up,” he said. “I would say BYD at this point is already better positioned than Tesla in the EV era.”

According to two Toyota officials who are close to Toyota’s joint R&D center with BYD in Shenzhen, BYD’s product development cost is 20% to 30% lower than at the Japanese carmaker.

If you can really go toe-to-toe with Toyota on manufacturing efficiency without sacrificing quality—and that remains a big if—you are probably not to be underestimated. [Ed note: Whenever someone mentions BYD I pop up like a genie, so I’d just add that BYD actually has a plant in America making buses with American batteries, and, well, that hit some rough patches with the Feds as well. – MH]

Let’s dive into just how precarious the U.S.-China situation is right now, especially as that country’s automotive sector seeks to become the next great global powerhouse in EVs in particular.

The Detroit News reports that Republican Virginia Gov. Glenn Youngkin axed plans to build a Ford battery plant that would’ve brought 2,500 jobs to that state. Why? Because the plant was a joint venture with CATL, the Chinese battery juggernaut. CATL’s the biggest EV battery supplier in the world, basically, and a supplier to companies like Tesla. But Youngkin just can’t have any of that goofy communism stuff in his state:

“While Ford is an iconic American company, it became clear that this proposal would serve as a front for the Chinese Communist party, which could compromise our economic security and Virginians’ personal privacy,” Youngkin spokesperson Macaulay Porter said in a statement to The Detroit News.

[…It] appears to be off the table after Youngkin rejected the project in December, a decision that potentially cost one of the poorest parts of Virginia at least 2,500 jobs. The project would have been built on the Southern Virginia Mega Site at Berry Hill in Pittsylvania County, in the Southside region of south-central Virginia, the Richmond Times-Dispatch reported.

The Times-Dispatch reported that the plant would have produced lithium iron phosphate batteries for Ford’s EVs. Ford in July unveiled key aspects of its strategy for sourcing raw materials for batteries, including the addition of LFP battery cells to its portfolio — a move that would help the Dearborn automaker reduce its reliance on such battery minerals as nickel and cobalt.

The battery plant may go to Michigan instead now, and probably just as well for the automotive sector in that state.

The Detroit News story wisely notes that Youngkin is a likely Republican candidate for president in 2024, so that probably influenced his thinking at least somewhat here. But the move speaks to the general wariness Americans have, especially on the political right, when it comes to China anything. Youngkin was one of several GOP U.S. governors who also banned Chinese-owned TikTok from government computers and phones.

Maybe the key issue here is motivation. Was the Ford-CATL plant a threat to Virginians’ “economic security” and “personal privacy,” as Youngkin says? Probably not? Also, this plant was going to make batteries for the F-150 Lightning and Mustang Mach-E, not a giant printing press that would put a book full of Mao quotes in the hands of every child in the Commonwealth. Jobs are jobs, too, and Virginia needs more of those.

A major goal of the IRA is to not cede the battery and EV supply chain to China. You know if automakers had their way, they’d just build everything there because it’s cheaper. But this was a Ford joint venture with a pretty huge, leading Chinese company, not the offshoring of jobs and production. Hell, Ford could arguably learn some stuff about battery manufacturing from CATL; why shouldn’t we steal their technology for a change?

If you need another perspective, here’s the libertarian magazine Reason, which thinks this move was kind of short-sighted and overtly political:

But even if CATL did share its technology with the Chinese government, it’s not clear how that constitutes a national security risk to the United States. After all, battery cells made by private companies are not state secrets. And plenty of other automakers already manufacture electric cars, meaning that China can’t have a monopoly on battery technology. Besides, if Americans are able to buy cars that don’t have to use gasoline, what does it matter who manufactured them?

More than anything, Youngkin’s decision feels like good old-fashioned economic protectionism, favoring domestic companies over foreign firms no matter the impact on the end consumer. In the State of the Commonwealth address, Youngkin also called for the General Assembly to “send me a bill to prohibit dangerous foreign entities tied to the CCP from purchasing Virginia farmland.” This is a similarly bipartisan proposition: In last year’s Georgia gubernatorial debate, Democratic candidate Stacey Abrams complained about “the rise of Chinese Communist Party-backed companies purchasing American farmland.” Notably, in each case, neither China nor the state government is seizing anyone’s land; Chinese entities are purchasing land at rates Americans are willing to accept.

That story also notes Youngkin said, “We felt that the right thing to do was to not recruit Ford as a front for China to America.” That’s… a reach, to put it politely!

Now you see why BYD wants to just sit this one out for a minute.

No, that isn’t a headline about used car prices, plausible as it may be. It’s the amount a federal jury awarded the owner of that car in yet another lawsuit over Ford’s disastrous PowerShift transmission from the previous decade.

Here’s The Detroit Free Press on the case, part of a series of cases that Ford keeps losing:

A Los Angeles federal jury ruled last week against Ford Motor Co. in the case of a 2013 Fiesta owner whose car required three new clutches and six transmission repairs in fewer than three years, dealing yet another blow to Ford in a case involving an unfixable defective transmission.

This is the third loss in a row for Ford in cases from consumers who opted out of a class-action settlement related to the DPS6 dual-clutch “PowerShift” transmission used in some 2 million Focus and Fiesta cars sold over a decade.

Ford customers have claimed in legal filings their 2012-16 Focus and 2011-16 Fiesta compact cars were built with transmissions prone to shuddering, slipping, bucking, jerking, hesitation while changing gears, premature internal wear, delays in downshifting and, in some cases, sudden or delayed acceleration.

Plaintiff Rodolfo Mejia was awarded $58,015.36 after the jury found Ford to have violated California’s powerful Song-Beverly Consumer Warranty Act by not fixing the damn gearbox for good.

I wonder what he’ll buy with that money after the lawyer’s fees are deducted. I hope it’s not another Fiesta.

The Flush (Or Whatever We Want To Call This Now)

What’s your take on Youngkin’s move to boot Ford and CATL out of Virginia? Who’s in the right here, and how does America walk the line when it comes to China’s auto industry?

Editor-at-Large at The Autopian.
Read All My Posts »
PrevPreviousHi, I’m In Delaware: 2002 Volvo S60 vs 2005 Suzuki Verona
NextIs A Sailboat A Self-Propelled Vehicle? What About A Cable Car? Or An Elevator?Next