Facebook-f Twitter Instagram Rss
Menu
Menu
Home » How Much Of Your Car Data Are You Willing To Give To Google? 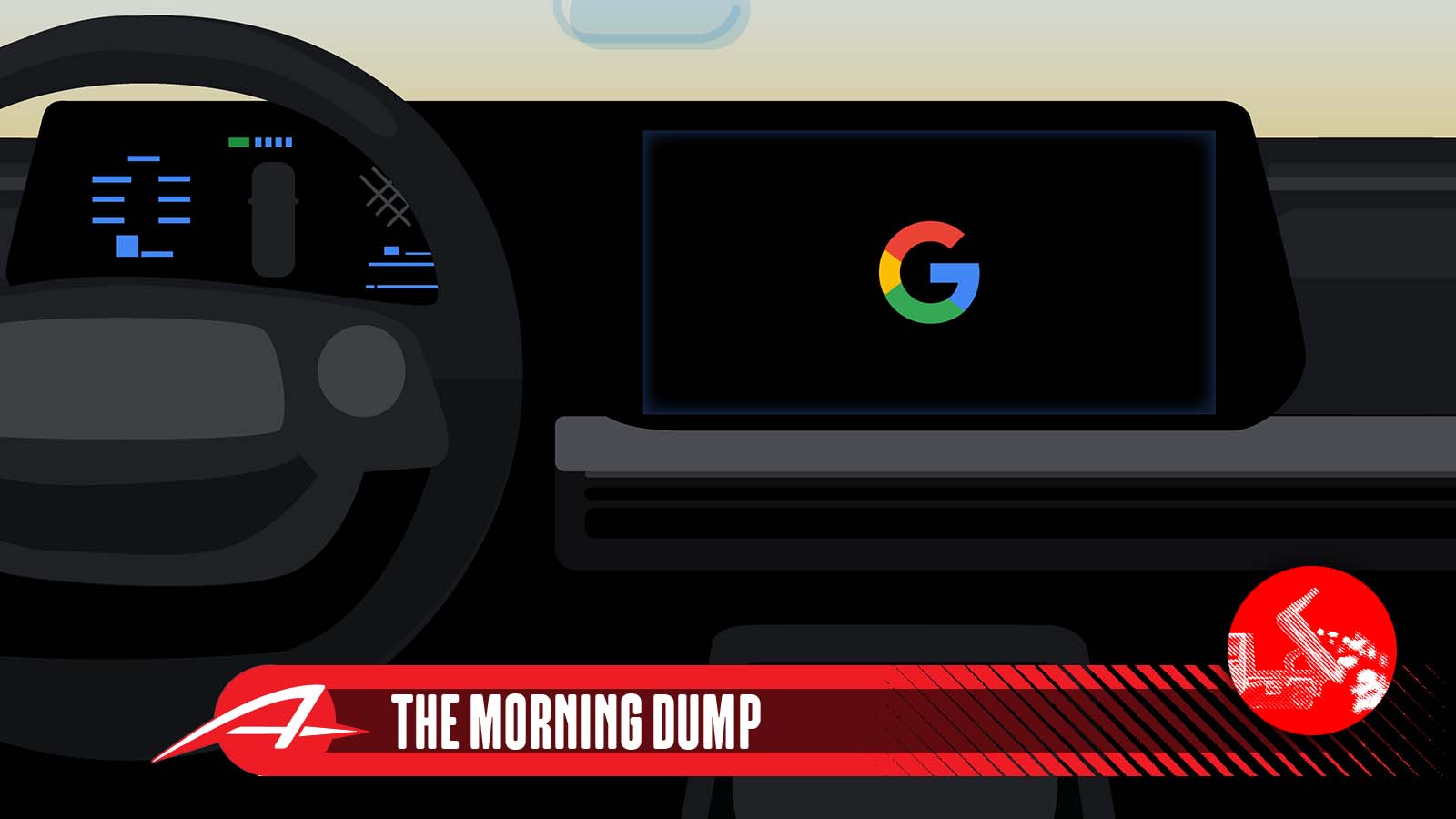 The journey of carmakers in the “data” era has taken companies from building their own walled off gardens that they completely control (albeit probably powered by something like Blackberry’s automotive software), to Bring-Your-Own-Device (sure, we can read songs off your iPod!), to now just turning over the car’s infotainment entirely to Google. Is this the best play? Porsche is the latest automaker to face this question.

Other big questions this morning in the Dump: What’s the point of having an electric sub-brand if your whole brand is going to eventually be electric? How much can you trust what the CEO of an electric car company says (no, not that one) on CNBC? Will American companies be the big winners in the EV future?

For many consumers, it’s just nice to connect your Android or Apple phone to your car and seamlessly merge your outside-the-car life with your inside-the-car life. To do this, your car needs to have either Android Auto or CarPlay. It works fine!

If you have a different car, say a new Polestar, then Google Maps and Google Assistant are the default and built into the car itself. This means you don’t even need to connect your phone (probably) to access all the features you’d normally use at home. In practice, it works quite well, though when I’m in a car equipped with such a system I often end up just defaulting to running off of my iPhone. The biggest perk is that Google Maps remains the superior mapping option for general travel and if it’s what the car uses, all the better.

There’s a trade-off for automakers in offering this feature, however. Google requires a ton of data, and if an automaker incorporates the tech company’s suite into a car’s system, then that automaker is, in a sense, giving that data (your data) to Google. According to this article in Reuters (“Google, Porsche in talks over Google Apps access”), this is exactly the conundrum Porsche is facing:

Porsche had previously been reluctant to use Google software because Google asked for too much data to be shared, according to Manager Magazin, which first reported the talks.

What works for one automaker (GM, Ford, Polestar all use Google Automotive Services) does not necessarily work for another:

BMW, for example, was “definitely not taking the path” of integrating GAS into its cars, a spokesperson said on Thursday: “It is important to the company to keep hold of the customer interface,” they said.

I’m not sure if Porsche or BMW is making the right call, to be honest. There are advantages to both (advantages, advantages!).

[Editor’s Note: It’s unsurprising that a German carmaker would be reluctant to give out a customer’s data. Germans, in general, are very private people who are often less than keen to give information away if they can avoid it. This is woven into the country’s fabric, perhaps a byproduct of an era in which there simply was no privacy, and spies abounded. My mom, a German, is very private, and frequently when I take photos of cars in Germany, owners ask me to block license plates. Laws in Germany tend to reflect this attitude towards keeping privacy sacred. Sometimes it seems to border a bit on paranoia, but I respect it. -DT].

Mercedes Tossing Out Its EQ Brand Like Yesterday’s Shower Spaghetti

On the other side of Stuttgart, Mercedes has a much easier decision on its hand: Keep the EQ brand for electric cars or transition away from it? The big EV push from Mercedes has come with a new brand, EQ, which is the company’s electric equivalent of AMG and Maybach, but for clean driving as opposed to power or über luxury.

According to an article in Germany daily newspaper Handelsblatt, the company is likely to move away from the branding as the entire company itself looks to electrify. Assuming you don’t read German, Reuters has their own version of the story and I’ll quote from that:

The decision is based on Chief Executive Ola Kaellenius’ focus on electric-only cars, making the EQ brand redundant as Mercedes turns away from the combustion engine, Handelsblatt cited the sources as saying.

There was a time when Netflix was 100% enjoyed by having the company ship you DVDs as opposed to now, when Netflix is 99% algorithm-induced baking competition shows you watch on your phone. And when you pull up “Is It Cake?”  on your laptop you aren’t watching Netflix-on-Demand, you’re just watching Netflix.

Ironically, automakers turn like ships and not like cars, so the EQ brand isn’t going to disappear tomorrow. Instead, it sounds like there will be a gentle transition.

Be Careful What You Say On CNBC

Don’t go on CNBC’s show “Squawk Box” unless you know what you’re going to say (unless you’re Alex Pareene) and what you should maybe avoid saying. This is a hard lesson that Lucid CEO Peter Rawlinson learned when he went on the financial program to announce that company had built a factory and was about to produce 6,000 to 7,000 Lucid Airs.

That didn’t quite happen, but Lucid did merge /go public with a SPAC (you can read more about SPACs here) and investors in that SPAC sued saying, those statements were wrong and that these allegedly misleading statements cost them money.

Lucid gained a big victory yesterday when a judge tossed that lawsuit. From a Reuters report on the lawsuit (again!):

U.S. District Judge Yvonne Gonzalez Rogers in Oakland, California said that despite media speculation, Churchill Capital Corp IV shareholders who brought the proposed class action had no reason to know in early 2021 that the SPAC would merge with Lucid.

As a result, she said Lucid Chief Executive Peter Rawlinson’s alleged misleading statements on Feb. 5, 2021 on CNBC’s “Squawk on the Street” could not have been material to their decisions to invest in the SPAC.

This makes sense! Maybe what he said was incorrect, but the two companies were still two separate and unmerged companies with no plans to connect so who cares? Still, be careful what you say on television.

Thanks to the Inflation Reduction Act and our growing electric car market here in America, it’s America that is benefiting from the electric car revolution. We’ve got Tesla. We’ve got the F-150 Lightning. We’ve got mega-giga-super battery plants opening up and car chargers going in everywhere.

While not every electric car in the United States was sold by an American brand, the vast bulk of them were built in the land of hot dogs, freedom, baseball, and Mountain Dew Code Red.

Automotive News has a piece, “U.S.-made EVs rule the market — and the trend is accelerating,” that uses manufacturing data to highlight this reality:

U.S.-made EVs accounted for about 75 percent of new-vehicle registrations in the first 11 months of last year, Experian data shows, and U.S.-based automakers were responsible for nearly all of the local production. The biggest exception was Nissan, with its Tennessee-built Leaf holding a 1.7 percent EV market share.

And it’s only getting better, baby:

“The emerging EV market opened up a new opportunity to all manufacturers and brands around the world, but the IRA changed that focus,” said Sam Fiorani, vice president of global vehicle forecasting at AutoForecast Solutions.

“The idea of $7,500 per vehicle lit a fire under companies like Hyundai and BMW to speed up their plans to make their EVs in local plants rather than shipping them into the country,” Fiorani added.

How do you navigate in your car? Waze? Google Maps? The car’s nav?

Howdy! I'm the Publisher of The Autopian which means I'm to blame for at least a small part of this. I used to run another car site and then made movies and TV shows. Now I'm here to convince you to buy a Peugeot.
Read All My Posts »
PrevPreviousAir-Cooled Fixer-Uppers: 1964 Corvair Van vs 1975 Porsche 914
NextThe Beloved Suzuki Jimny Gets Two Extra Doors, Is Now A Turbo And 6th Gear Away From Being The Perfect Off-Roader For AmericaNext