Just in case any of you out there aren’t feeling your best, or are perhaps having some difficulties with self-confidence or esteem or pleasure or whatever else you’d like to hang off the end of the hyphen after “self-,” I’d like to offer some help. I’d like to help by providing you an opportunity to compare yourself with me, a colossal, irredeemable idiot, and as a result feel far better about who you are and the choices you’ve made. Let me just get this self-flagellation out of my system and then we can all move on, hopefully cleansed and refreshed.

I know our own David Tracy tends to get most of the guff and ridicule about having a fleet of cars where running ones are rarer than fish cardigans, but he is by no means alone here; I, too, am such a fool, possibly worse. Probably worse. At this moment, only one of my cars in my fleet of five personal cars (I’m not counting the Tiguan, because it’s primarily my wife’s car, and its continued operation is only the result of a demonic deal I’ve made where it just gets to consume entire paychecks at will when it wants, with obvious relish and cruelty) is currently running, and that one I fixed over the weekend with a bit of garden hose.

So, if you don’t feel like reading all of this, here’s your takeaway: I suck. I co-run The World’s Finest Automotive Website (don’t check on that) and yet somehow I’m also incapable of keeping my fleet of miserable shitboxes going. Just to really make this stick in my spongy brains, let’s go through each vehicle one-by-one so we know the status of everything: 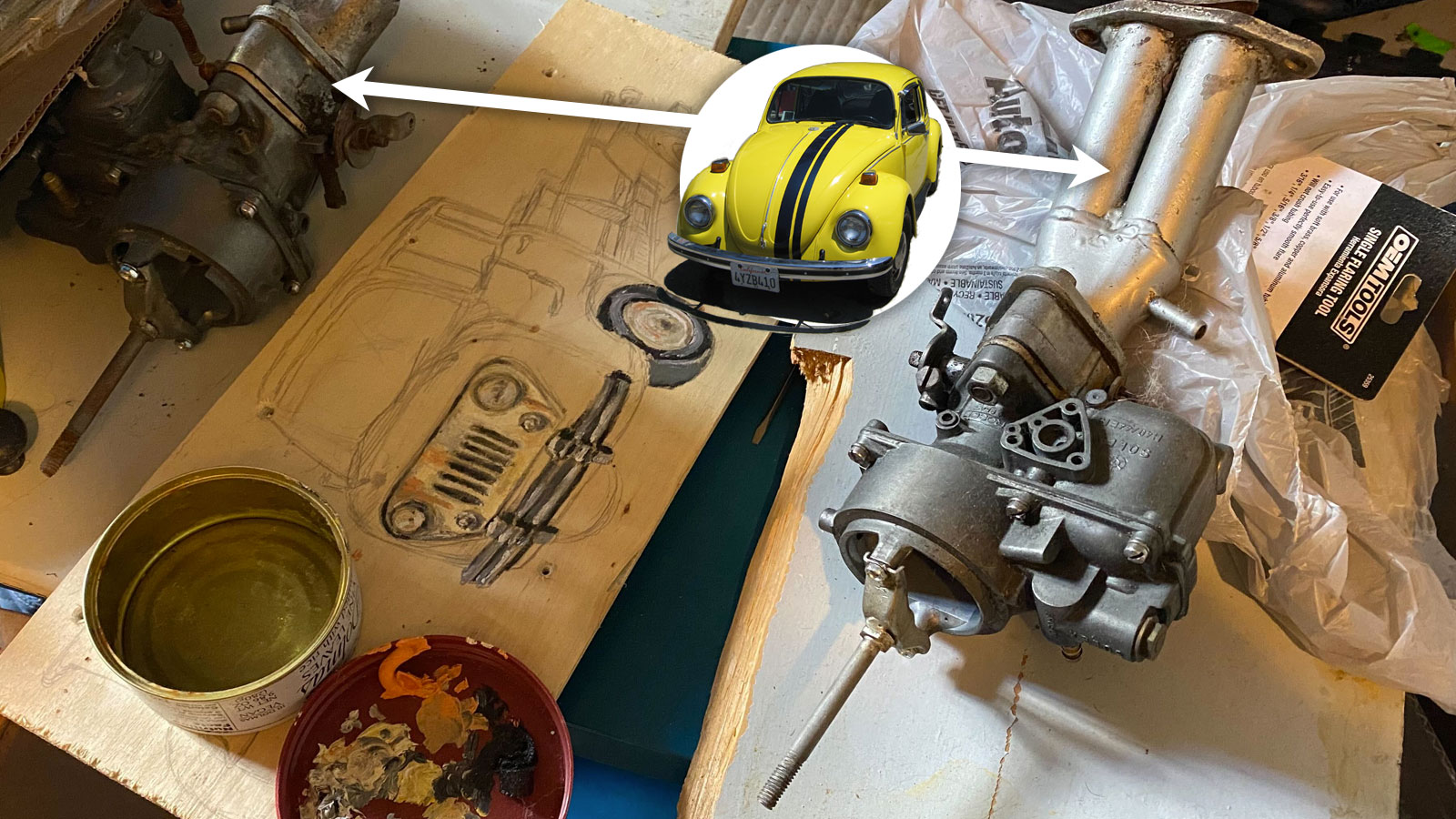 I think this is the one I’m the most ashamed of. The Beetle needed its carbs synched and cleaned a while back, so, in a burst of wildly misplaced optimism, I pulled them off, thinking I’d get them all nice and ready and pop them back on and be buzzing around in my beloved air-cooled little pal in no time.

Then, I decided to start a new car website and all the usual life stuff and days turned to weeks then months and months and those two Kadron carbs are still sitting there on the workbench, next to a barely-started painting I was making for David’s birthday last year, the whole sad pile forming a tiny grim temple to that cruelest of gods, Procrastinus, and the terrible grip he has on my stupid little life.

The poor Beetle has been sitting carbless for so long that the engine seems to have seized up, based on its unwillingness to turn the last time I tried to get it started. I’ve since poured some Marvel Mystery Oil in there in the hopes of freeing everything up, but have I been out there to try and test it yet, and get the process of resurrection started? No. Because, again, I’m an idiot.

It deserves better than this. This one is my biggest shame, and hurts the most. 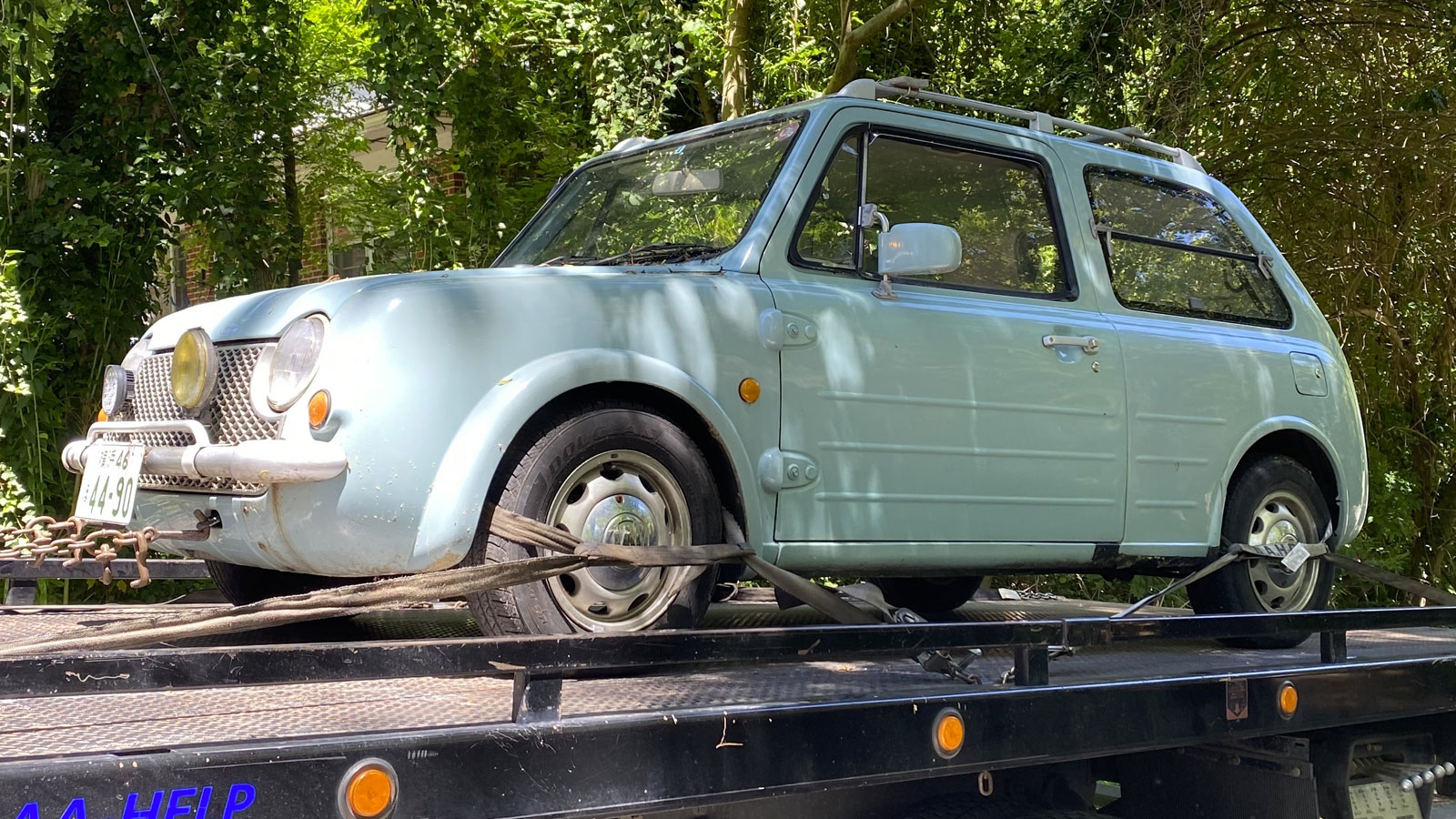 Okay, this one at least isn’t really my fault, but it stings the most because the Pao was my go-to daily driver, and my most reliable car. That little 987cc, 53 horsepower engine never let me down. Unfortunately, certain large fauna in my area hate to see me happy, and one of those stupid deer bolted out in front of my Pao last October, putting the car out of commission.

The bodywork was done months ago, but there was a pinhole leak in the radiator that the shop missed. As a result, while being tested after the bodywork fixes, the engine overheated and cooked the head gasket. So now it has to have that fixed, and because it’s all part of the initial deer-strike, insurance will cover it, but it’s taking forever. One shop took it and then decided they couldn’t do it so its off to another one and I just want it done and I miss my little car so much please please just fix my damn car.

One upside: with the head off, I’ll get the timing belt and water pump replaced, so this little JDM beast should be nice and ironclad for a good while. Once I get it back. 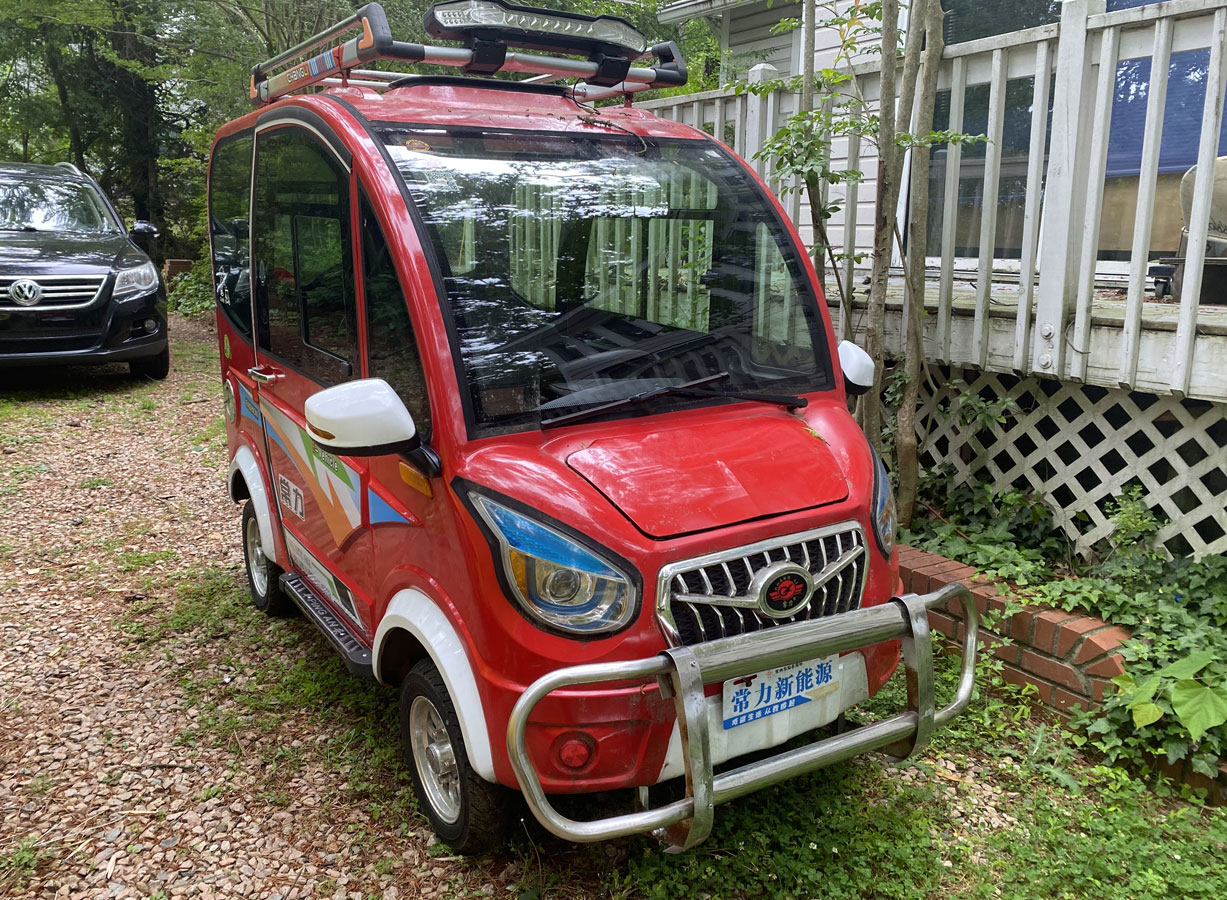 Et tu, Changli? Regular Autopian readers may recall that the majestic Changli, the Cheapest Car In The World, finally let me down after two years of pretty damn near trouble-free ownership. After doing some tests, I found that two of the 12V batteries in the 60V battery pack were only showing between 7 and 9 volts or so. So, I reached out to our sponsor, Optima Batteries, maker of batteries that produce the finest, creamiest, smoothest electricity known to man, and they should be hooking me up with a new batch to install.

But they’re not here yet, so the Changli sits, immobile and petulant. 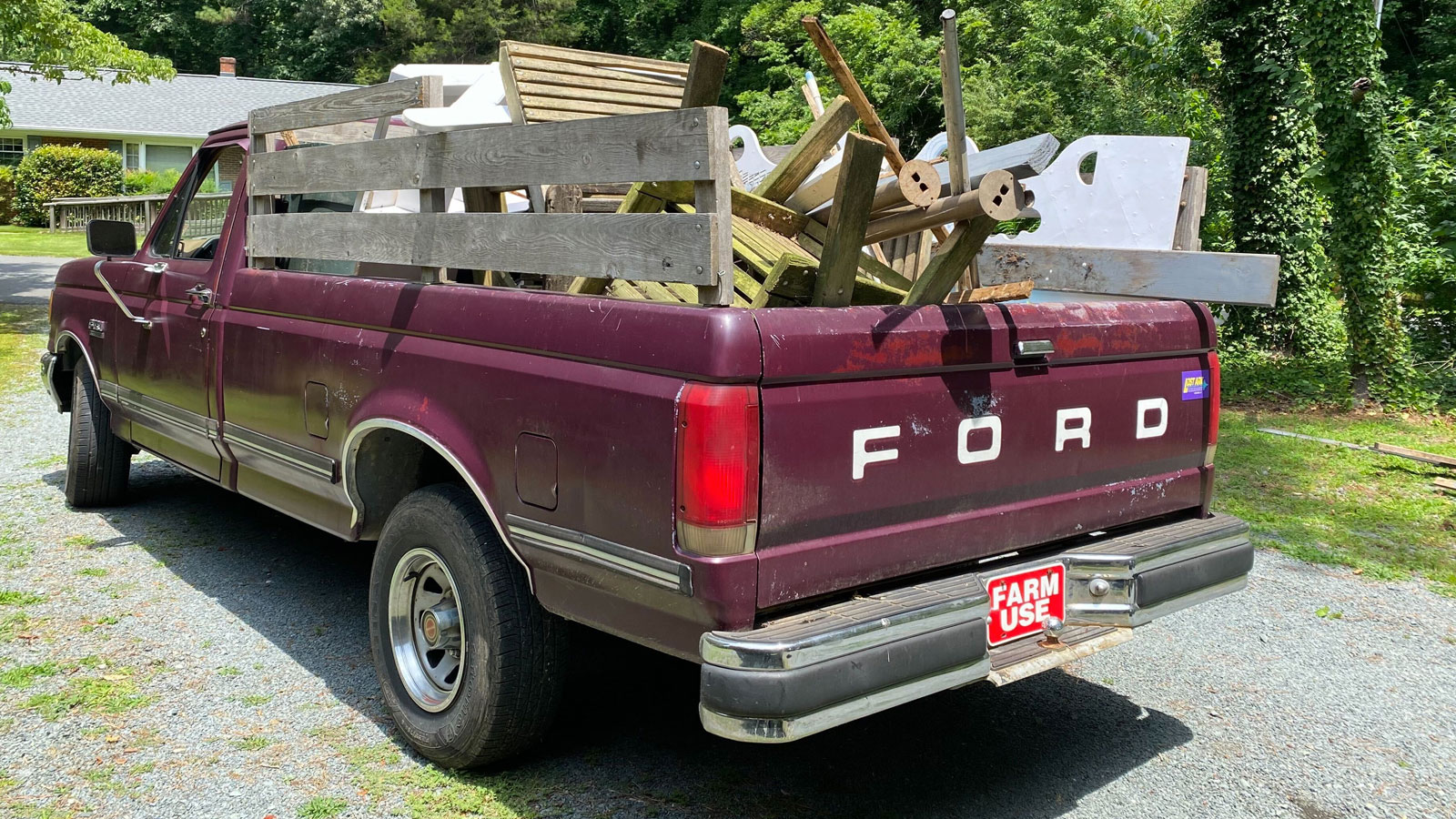 Yes, even the legendary reliability of the Ford 4.9-liter inline-six doesn’t seem to be immune from the powerful enshitification field my body seems to be emitting non-stop. I was driving The Marshal around a lot recently, throwing canoes and large loads of rubbish in the bed and generally enjoying the crap out of the ruggedly charming workhorse. Last weekend, though, in the middle of a torrential rainstorm, the serpentine belt jumped off a pulley, denying the truck electrical power, pumped coolant, power steering, A/C, everything.

I got it back on by skipping the A/C condenser, but I’m having a bear of a time getting it back on properly, mostly because of a fierce spring-loaded tensioner that seems more like a trap to crunch human fingers into little soft sausages of goop than any sort of engine part. I’ll get it figured out, but I’d love to know why the belt jumped off before I drive it regularly again, and I’m stumped so far. 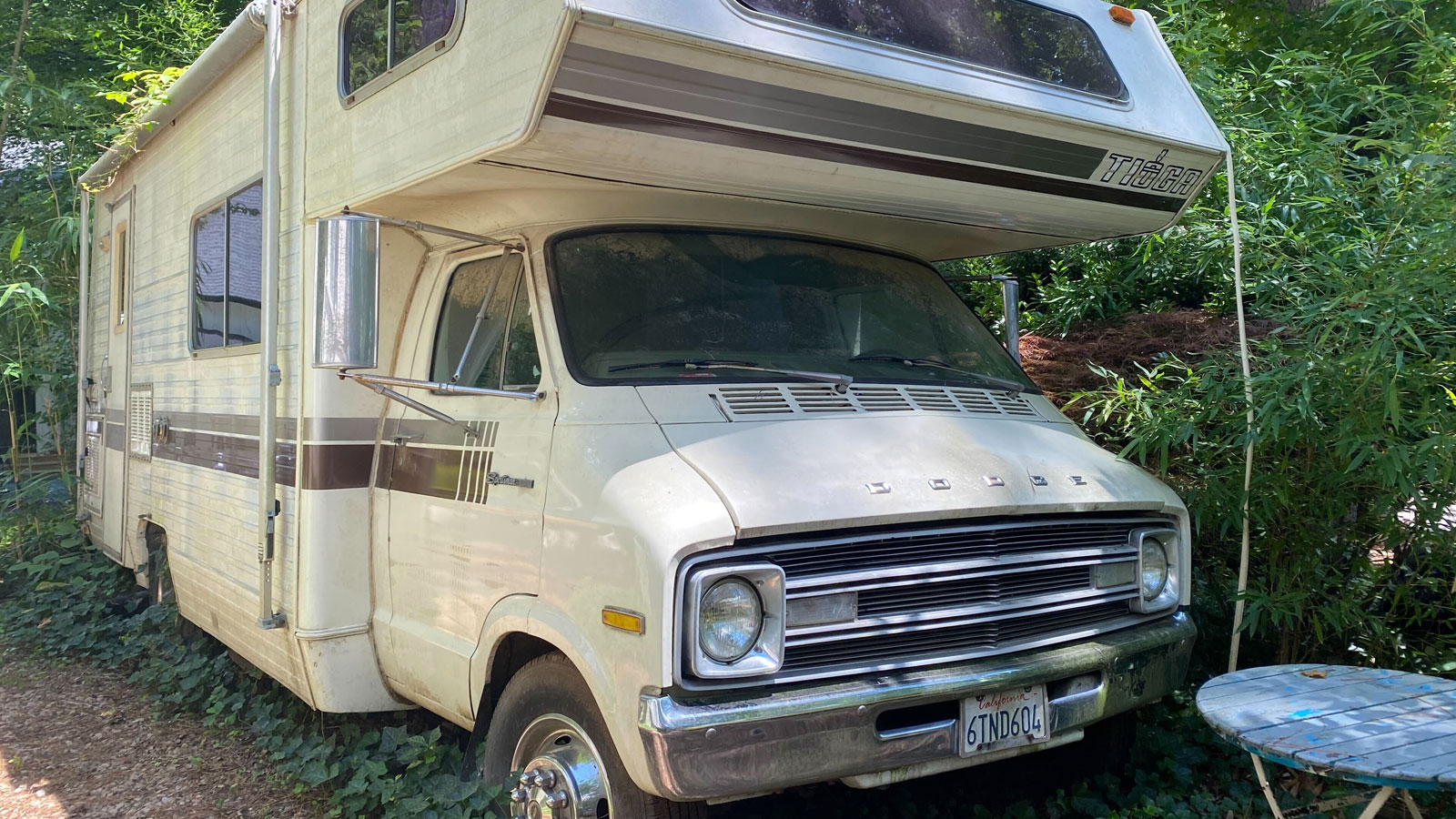 I’m not even sure why I’m including this one, as not only has it not run for years, but even if it did it would hardly make a rational daily driver, seeing as how it’s a house on wheels and would require me to re-finance my non-wheeled house every time I filled it up with gas. It’s got a massive Dodge 440 under the hood, and I bet whatever is wrong with it is well-known and understood. Could be a timing chain problem. Anyway, the plumbing was all replaced before it decided motility wasn’t its calling, so at least you can enjoy a comfortable shit in it. 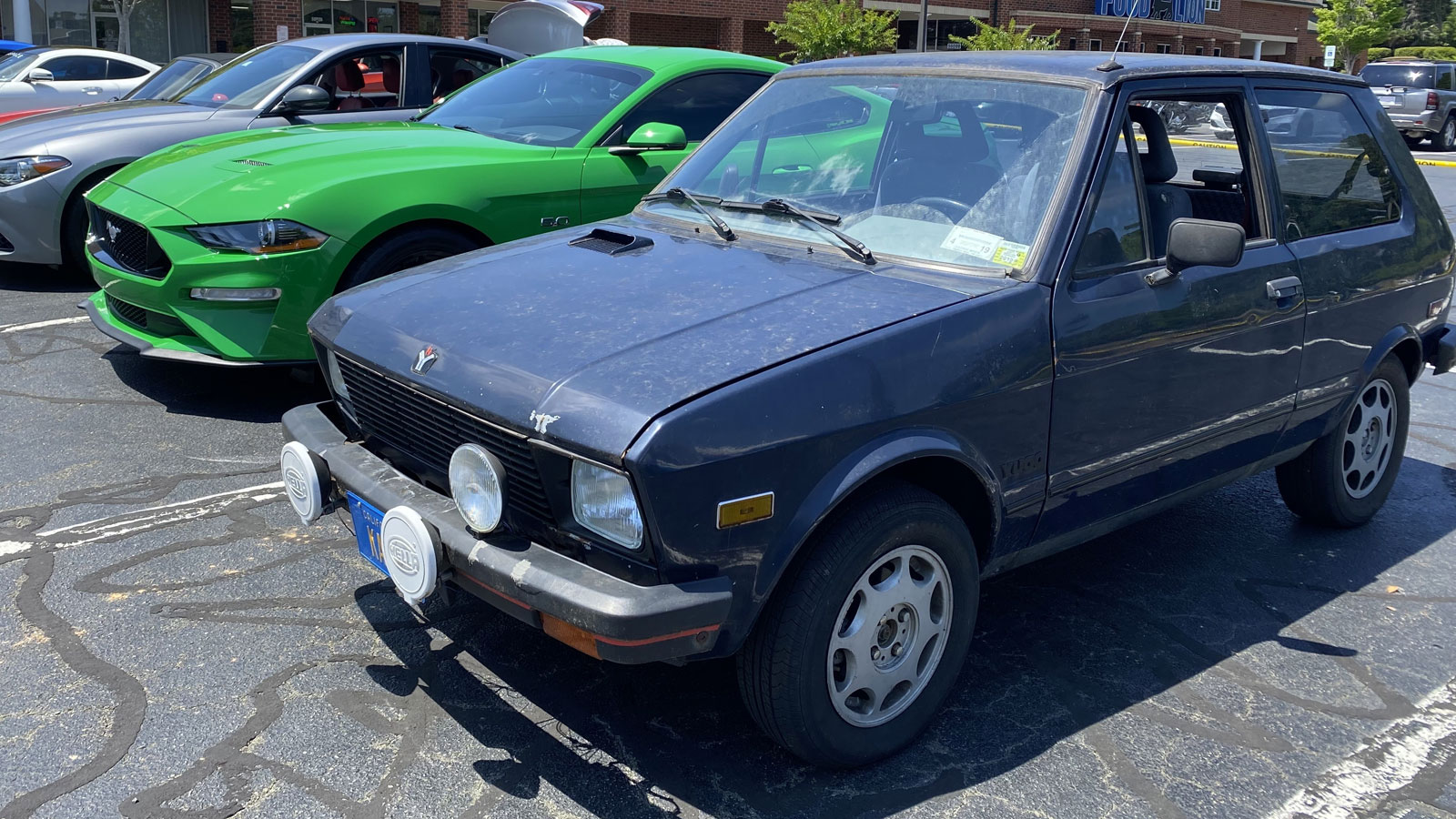 You may remember a couple weeks ago I took the Yugo to a local car show, where it debased the McLarens and Ferraris that surrounded it with a dirty sort of glee. As I left, encouraged by the tiny crowd, I laid some rubber by dumping the clutch, at the cost of my throttle cable, which broke under the strain of, well, throttling.

I rigged up a crappy fix that left me stranded on the side of the road last week, and then rigged up another crappy fix to get home, determined to fix it at least 40% less crappily, which I believe I did.

The throttle cable setup on a Yugo is incredibly simple: a little braided steel cable with a loop at one end that’s fed through a little flexible rubber conduit, the other end going through a loop in the gas pedal arm. My problem was the old cable’s loop broke, and the conduit was pretty janky as well, so when I finally made and clamped a new loop on the end, I couldn’t get the cable back through the conduit, and I couldn’t just run the bare cable through the engine bay because there’s too much there for it to bind on or too many hoses and wires that the cable would abrade away over time. I needed some kind of channel for the cable.

No local auto parts stores had any Yugo accelerator cables, and no one seemed to have any generic ones I could adapt, frustratingly. Finally, I realized that, hey, all this sleeve has to do is keep the cable moving easily and not harming anything else, so pretty much anything that can do that would work, right? 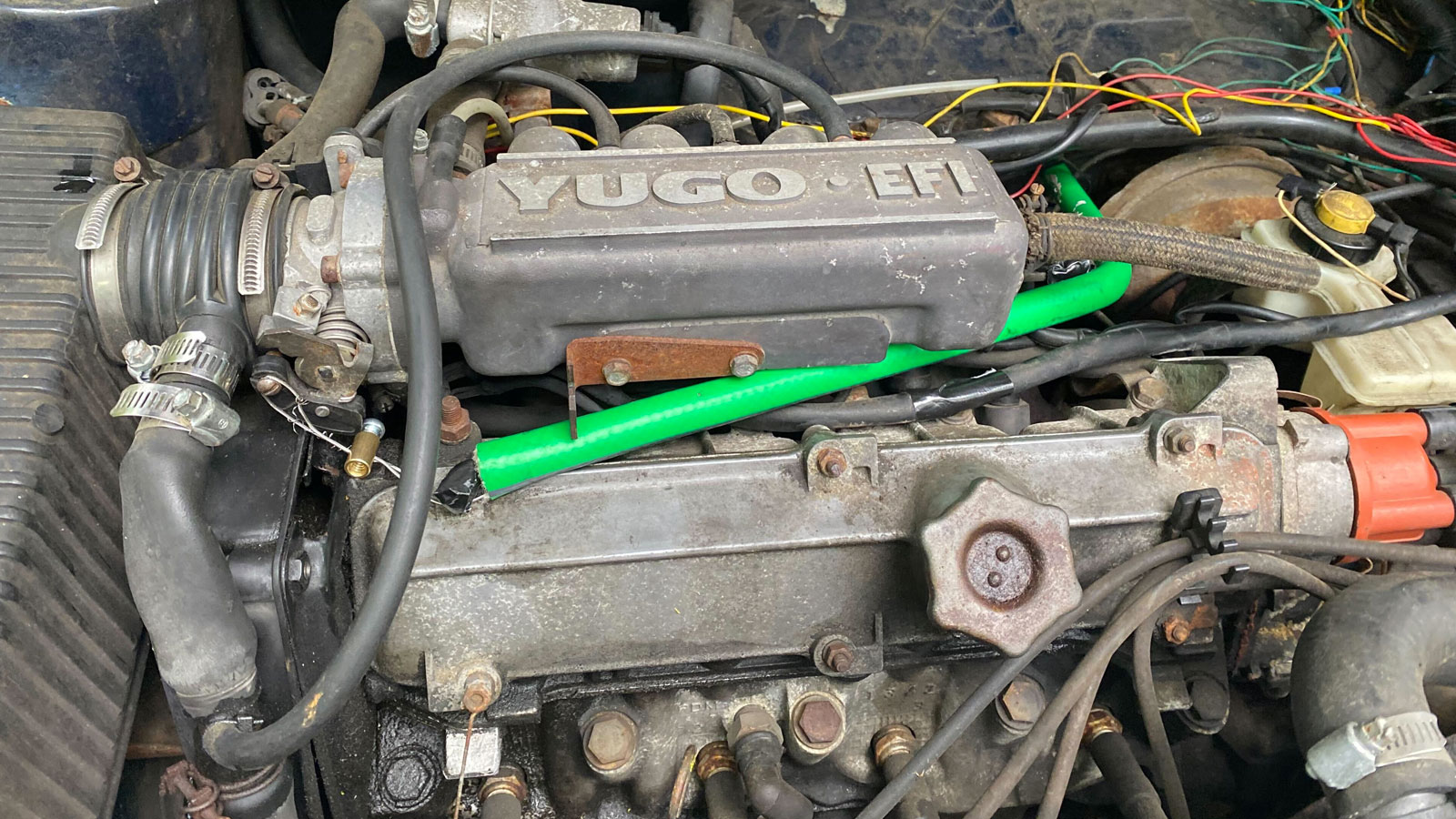 That’s when I grabbed an old garden hose, cut it to length, ran the throttle cable through there, and jammed it in place. It works! Really well, actually, and I think the bright green really livens up the engine bay there, too.

Considering I once got this thing back on the road with two hose clamps and a rock, this feels pretty on-brand for the Yugo. Plus, at 67 hp, this thing is actually fun to whip around like an idiot, which, as you will recall, we have confirmed that I clearly am.

So, this is my confession: I’m a drooling simpleton with six cars and the only currently running one is a Yugo that’s relying on 18 or so inches of garden hose to keep working. This is an absolutely insipid and ridiculous position to be in, and I have no one but myself to blame.

Well, myself and that stupid deer. But the deer is dead, and I’m still here, doing what I dearly hope isn’t the best I can.

I'm a co-founder of the Autopian, the site you're on RIGHT NOW! I'm here to talk to you about taillights until you cry and beg me to stop, which I absolutely will not. Sorry. Hug? Also, David's friend.
Read All My Posts »
PrevPreviousKia Proudly And Unconscionably Evicts Adorable Hamsters In Favor Of Skeleton NFTs
NextThe Tiny HMV FreeWay Promised Up To 100 MPG And Highway Speeds With A Lawnmower EngineNext