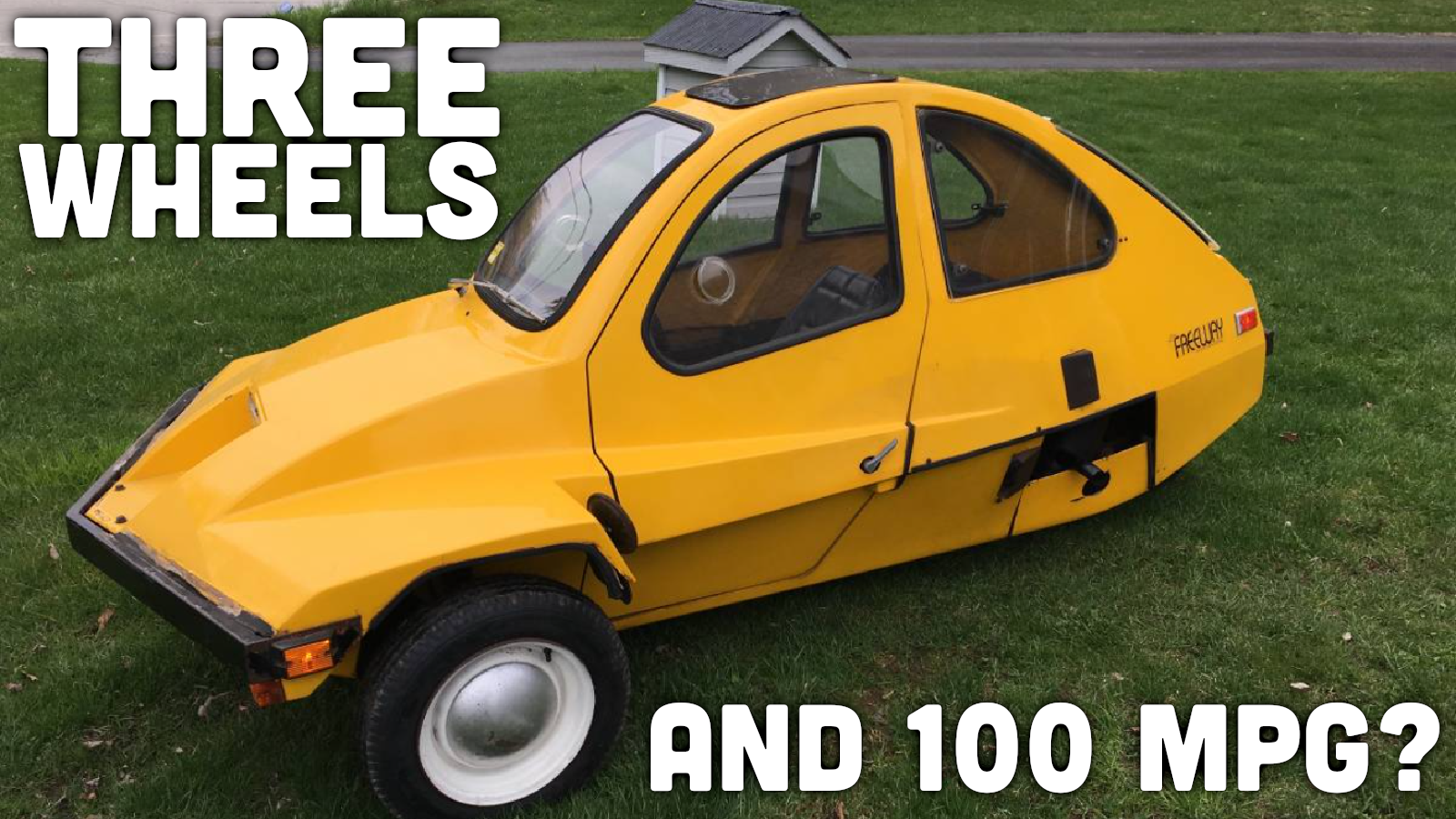 The 1970s brought a major change in how cars were built. A fuel crisis and a rough economy began pushing out land yachts powered by thirsty V8s. In their place would be a wave of smaller, more efficient vehicles. The era also brought some wild ideas on saving money at the pump. One of them is the rare High Mileage Vehicles FreeWay, a lightweight trike promising up to 100 MPG with the use of a lawnmower engine.

It’s remarkable how many weird and awesome vehicle designs trace their roots back to the oil crisis. Americans in the 1970s learned real quick that their rides got horrific fuel economy, leading to buyers and companies downsizing. The era brought on smaller cars, some pretty wild vehicle designs, and even challenged the airline industry. We’ve written about a few of these from the Creative Engineering Jutta, to fiberglass camper trailers, and even the failed Dassault Mercure airliner. Just before the decade closed out, production started on a real neat piece of what is now automotive history.

In 1979, Apple Valley, Minnesota resident Dave Edmonson believed that he found the solution to America’s fuel woes, reported Minnesota newspaper Sun This Week. His HMV FreeWay didn’t just advertise 100 mpg, but guaranteed it so long as you kept the vehicle in operating order and drove it just 40 mph.

Backing up Edmonson was his research. In 1970, he was studying mechanical engineering at the University of Minnesota when he began looking into economical vehicles for a course. And Edmonson, like the fellow that built that 75 mpg Geo Metro, felt that taking the family car to work was wasteful. From the Sun This Week:

“I thought it would make a lot of sense for people driving to work or when they don’t need a big car to be driving something smaller and more economical,” said Edmonson, a father of six and grandfather of 19. “I did studies on how much power it took to move a small vehicle down the road and what kind of mileage you could expect. I began building a prototype in 1974 and finished it in 1976. That’s when I tried to start getting the business going.”

In 1978, Edmonson secured funding for his car and set up shop in Burnsville, Minnesota. High Mileage Vehicles moved around a couple of times before settling its assembly line down in a building that is now a church.

Inside of that building, a team–that was at its highest, just 22 people–assembled the little FreeWay.

And what you got with this trike is, well, not much. The body consists of two pieces of fiberglass molded in color. The body is draped over a steel tube frame with a perimeter frame that includes the vehicle’s crash structure. And yes, that small strip of black is the vehicle’s steel bumper. The Burnsville Historical Society shows us what that structure looks like.

And out back was a Tecumseh single cylinder that you’d normally find in a lawnmower. [Editor’s Note: To be fair, a riding mower, I’d think. – JT] The smaller 345cc model made 12 HP and was the one guaranteed to get 100 mpg so long as you drove 40 mph. And if you didn’t like internal combustion, you could get a FreeWay with a 4 HP electric motor paired to just enough battery power to reportedly get you as far as 20 miles.

If you were a speed demon, there was a 453cc variant that made a ravenous 16 HP. Top speed with the bigger plant was noted to be 65 mph. That one was supposed to get you 80 mpg as well.

And no matter what powertrain you got, it came with a CVT driving the rear wheel through a chain. As an owner interviewed by Sun This Week noted, that guarantee was that if the car didn’t hit 100 mpg, HMV would take it back.

The interior of a FreeWay is best described as spartan. You have basic instrumentation, an oil cooler used as a heater, and the interior was covered in carpeting.

But, given the vehicle’s about 700-pounds of weight, there’s not a whole lot going on. I mean, it has just a single headlight!

Robert Dunn of Aging Wheels got to take one for a spin and it’s clear that these were put together on a shoestring budget. The example he tested has plastic windows (including the windshield) that were sort of just there, and the trunk window isn’t even sealed from the elements. And while it features a full independent suspension, it wasn’t anything sporty.

I highly recommend giving Dunn’s video a watch; it’s really entertaining. Apparently, that FreeWay gets nowhere near 80 mpg, and instead averages closer to 50 mpg. Of course, remember that the 100 mpg claim was very specific, requiring you to drive exactly 40 mph in a FreeWay with the smallest engine.

Most states reportedly classified them as motorcycles, while others, like Illinois, classified them as a car. And at least one state wouldn’t even allow them to be registered at all. According to the FreeWay Newsletter in 1981, Connecticut was one such state. Connecticut did not consider the FreeWay to be a motorcycle and thought that the vehicle was “unreasonably dangerous” among traffic and semi trucks.

The FreeWay wasn’t a success. Talking to the Sun This Week, Edmonson noted that gas prices came down and the economy was rough. Eventually, sales dwindled to the point to where High Mileage Vehicles couldn’t stay open. In 1982, the company filed for bankruptcy after building 700 FreeWays. Apparently there were still orders that the company could no longer fulfill. D&A Vehicles later bought the FreeWay and made 17 microcars based on its running gear and frame.

Today, the FreeWay has a bit of a cult following. FreeWay owners have gathered for their own rallies and even participated in microcar meetups. At my local Illinois Secretary of State office there’s a slightly faded photo on a board showing a bunch of colorful FreeWays that gathered for the Micro/Mini Car World Meet 2010.

Of course, FreeWay owners even set up a club. The site for it is now down, but you can visit it through the Wayback Machine. There, you’ll find that there was a 390cc engine and a diesel advertised, but apparently nobody picked up a FreeWay with either.

The website also told some questionable stories about safety. It claims that the FreeWay was so well-built that people have rolled them and crashed into pickup trucks without getting any more than bruises. That pickup truck story seems to go as far as to claim that the truck came out worse than the FreeWay. Since there are no citations I’m taking those stories with a grain of salt.

In the end, the HMV FreeWay was yet another failed attempt to sell a super-high mileage vehicle. But, I’m glad that it exists. A lot of people have dreams, but few end up being like Dave Edmonson and can actually say that they built a handful of their own car.

Mercedes is a lifelong fan of all things powered by an engine. When she isn't driving one of her five Smart Fortwos or her 14 other vehicles she could be found in the cockpit of a Cessna 172 or perhaps swimming in any body of water that she could find. She also has a deep love for buses of all kinds. Please send her buses. mercedes@theautopian.com Instagram: @mistymotors Twitter: @Miss_Mercedes30 Facebook.com/neonspinnazz
Read All My Posts »
PrevPreviousMy Fleet Is In Shambles And I’m An Absolute Idiot But I Did Fix My Yugo With Some Garden Hose
NextCold Start: GMC Means ‘Gazes Match Seldom’Next