It’s practically a Hollywood trope that an action movie hero or villain can turn any car into a Jeep instantly. Yes, I’m talking about ripping car doors off like bandages, whether with a harpoon, with mechanical tentacles, or with Arnold Schwarzenegger’s sheer might alone. Ripping car doors off makes for a pretty cool visual sequence, but Hollywood is also the land of prop glass and chroma key. What I’m saying is that ripping a car door off sounds really difficult in real life, and YouTuber Tyler Bell decided to find out exactly how difficult it is. Hint: It’s not easy.

So how does one build harpoons for car doors? You certainly won’t find off-the-shelf harpoons for this application from Tractor Supply or the tenth-tallest pyramid in the world that’s currently a Bass Pro Shops. In this case, Bell got some parts laser-cut out of quarter-inch steel, then welded the parts together, and also made one harpoon with titanium arms for good measure. Perfect for shooting out of a can cannon. Unfortunately, the can cannon simply doesn’t have enough sauce to prevent the harpoon from tumbling and hitting the door sideways. What gives more sauce? How about an air cannon with a two-inch valve. 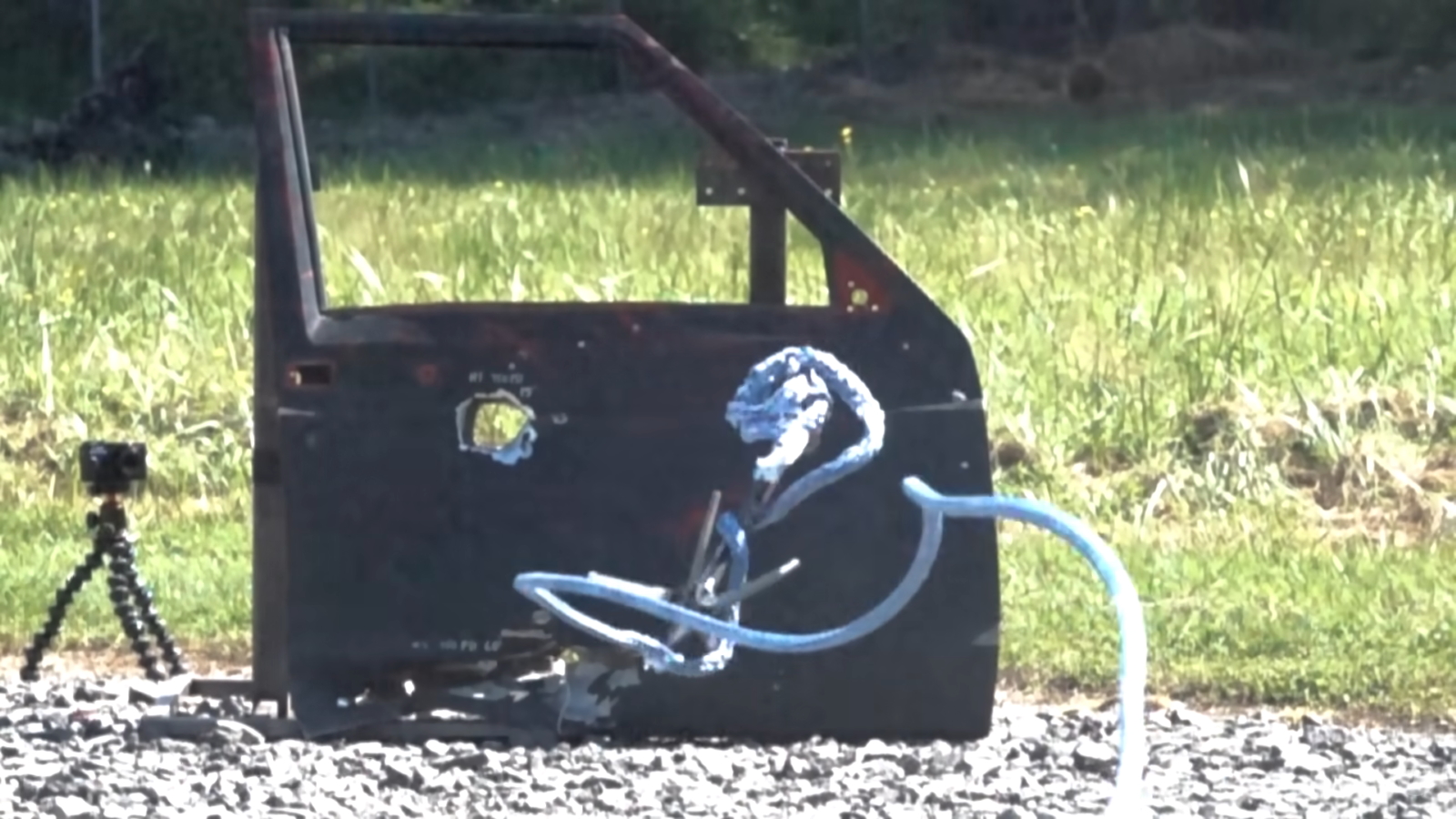 Although the air cannon has no trouble firing a bare harpoon straight through a door, an issue arises when rope is attached to the harpoon. Bell found that the whole arrangement went sideways, failing to penetrate the door and instead just tangling on itself. Still, the show must go on and the rope is whatever, so it’s time to sacrifice a junker in the name of science. 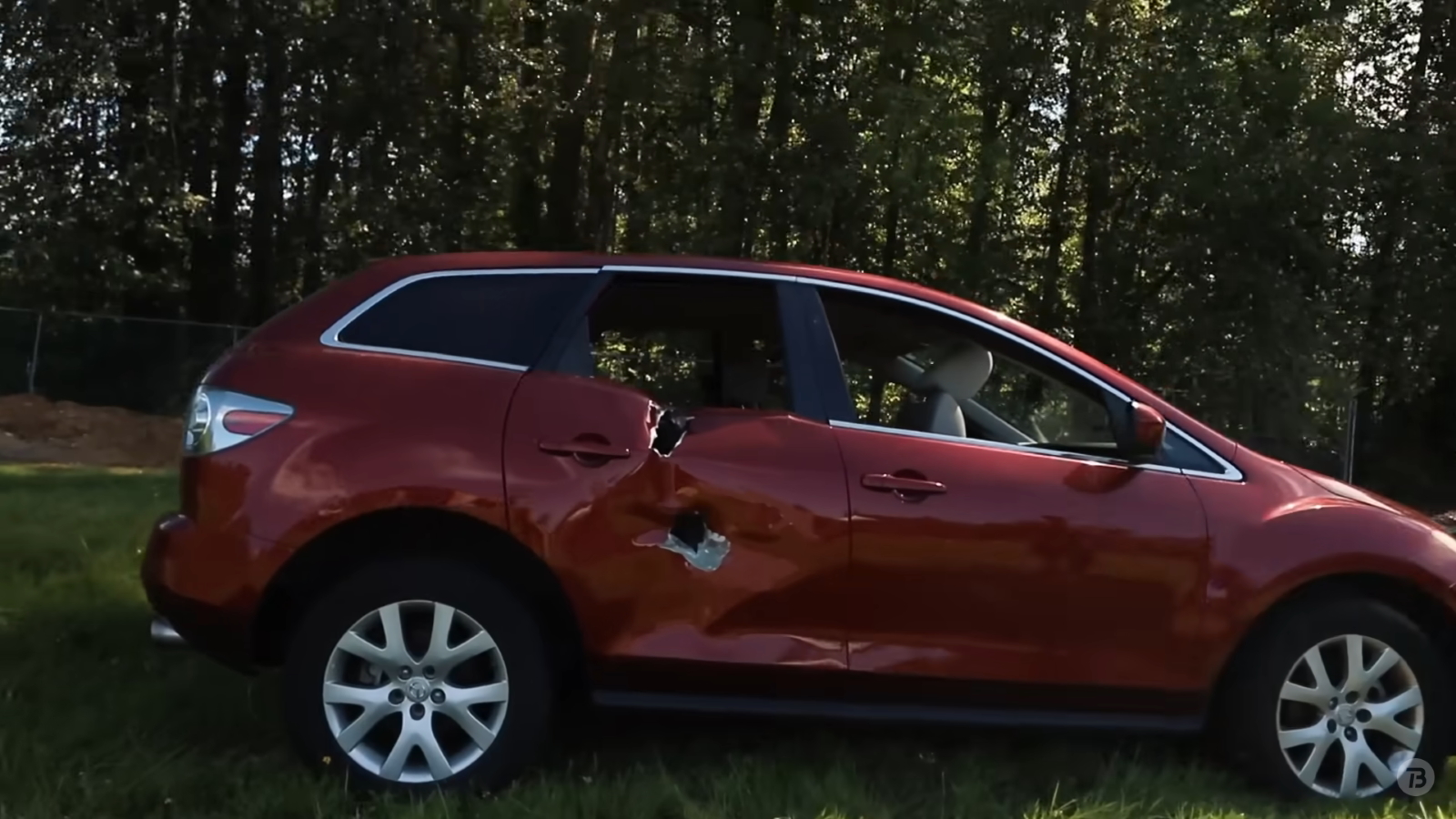 While the early Mazda CX-7 used for the experiment does look fairly nice, it’s still an early Mazda CX-7, a horrifically unreliable heap that was towed into the shot. Blowing holes in those doors isn’t a huge loss by any means. Oh, and when I say blowing holes through the doors, they’re absolutely massive and don’t seem to slow the speed of the harpoons like the earlier small-scale test door. Considering the test door was from an older vehicle, I’d wager that thinner sheetmetal and voids in modern door structures played a role here. 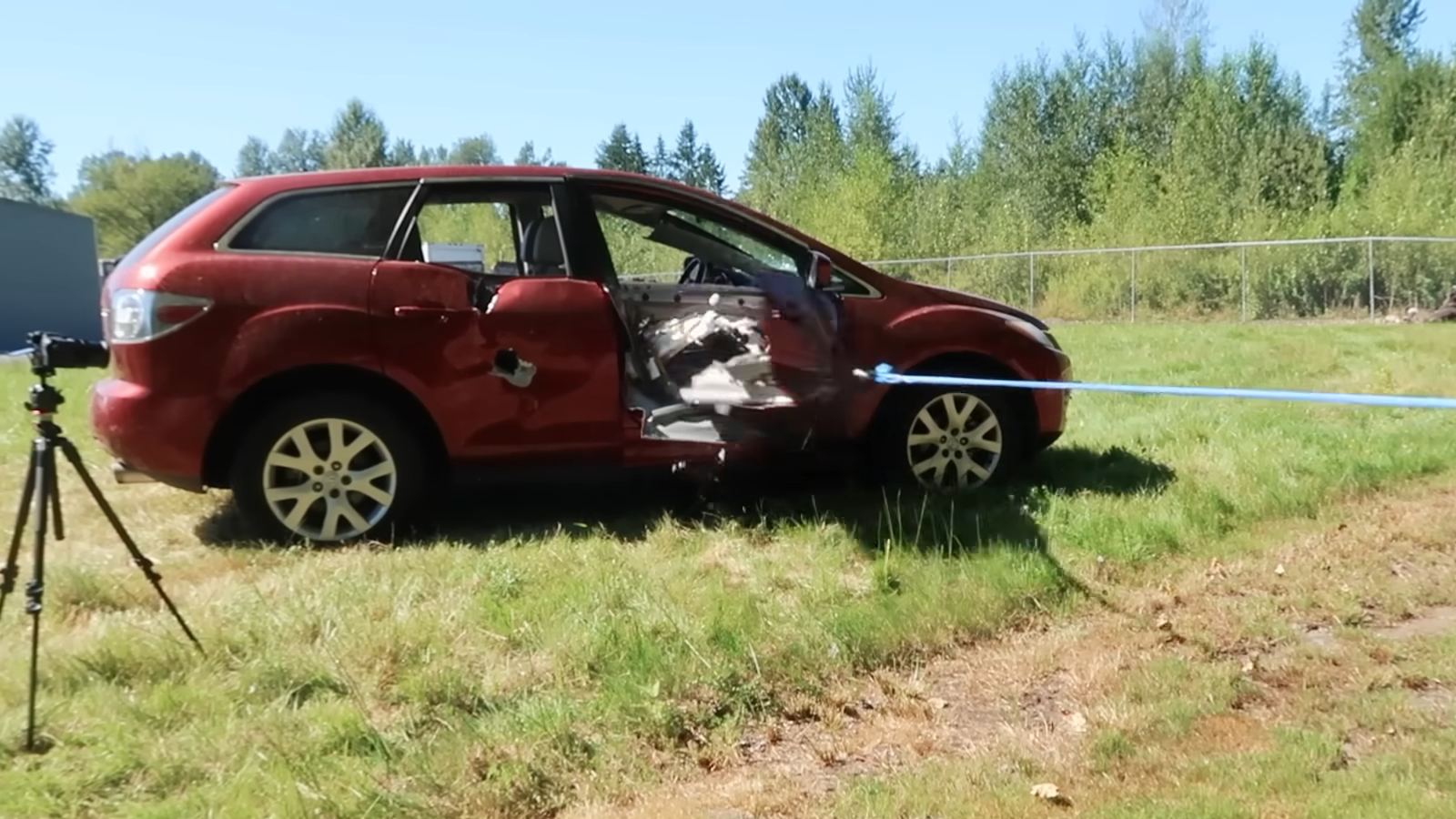 Alright, Bell has blasted some holes, it’s time for part two of the blockbuster stunt. Jam a harpoon in a hole, put it on a cable, run the cable through a snatch block, hitch the other end of the cable to a car, and then let it rip. This might not come as a huge shock to anyone who’s watched footage of side-impact crash tests, but modern door latches and hinges are really strong. It seems a lot more likely to just rip the door skin off than to snap hinges, and that’s pretty much what Bell experienced. However, Hollywood is a land of smoke and mirrors, so Bell did some cutting and grinding, used a flat steel plate to brace the inside of the door, and let it rip. The end result was nearly flawless – a car door ripped right off of its hinges, albeit without the use of a harpoon. Hey, that’s Hollywood. 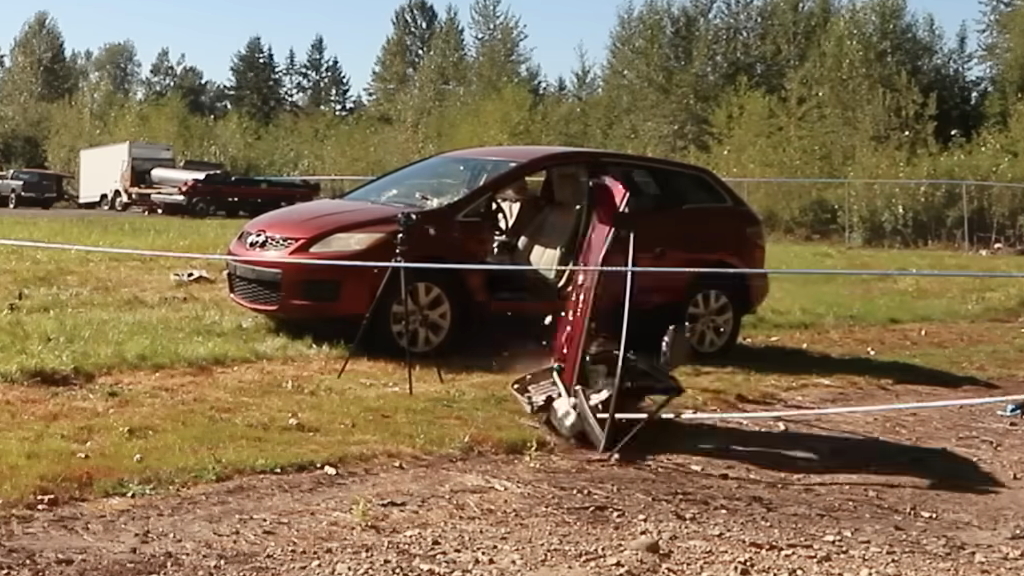 So what have we learned here, other than that this video is pretty awesome and that practical effects often require strategic fakery? It turns out that despite being held on with what might look like fairly light hardware, modern car doors are very securely-affixed. Even when subject to a solid tug from a midsize SUV, everything held tight. Modern vehicle construction, isn’t it a wonderful thing?

I’m Hosting A Junkyard Tour And Then A Wrenching-Themed ‘Going Away Party’ At My House In Michigan. You’re All Invited!

Thomas is a Nu Rave-blaring, heel-toe downshifting, maple syrup-swilling, chassis-geeking, junkyard parts-hauling, floppy-haired scenester who's been writing about cars since college. His current ride is a 2006 BMW 325i with the six-speed manual gearbox. Instagram: @thomas.hundal Twitter: @thomashundal
Read All My Posts »
PrevPreviousI Drove Winnebago’s New Electric Camper Van And It Excites Me About The Future Of RVs
NextGM Is Considering A Baby EV Pickup Truck That Could Start Under $30,000Next