Welcome back to Shitbox Showdown, where we fantasize financial burden. This should be the last Shitbox Showdown of the year, so I figure why not end 2022 with a bang and go way past both our typical price cap and the rational limits of reliability. First though, let’s see how our battle of sensible luxury cars from yesterday went. 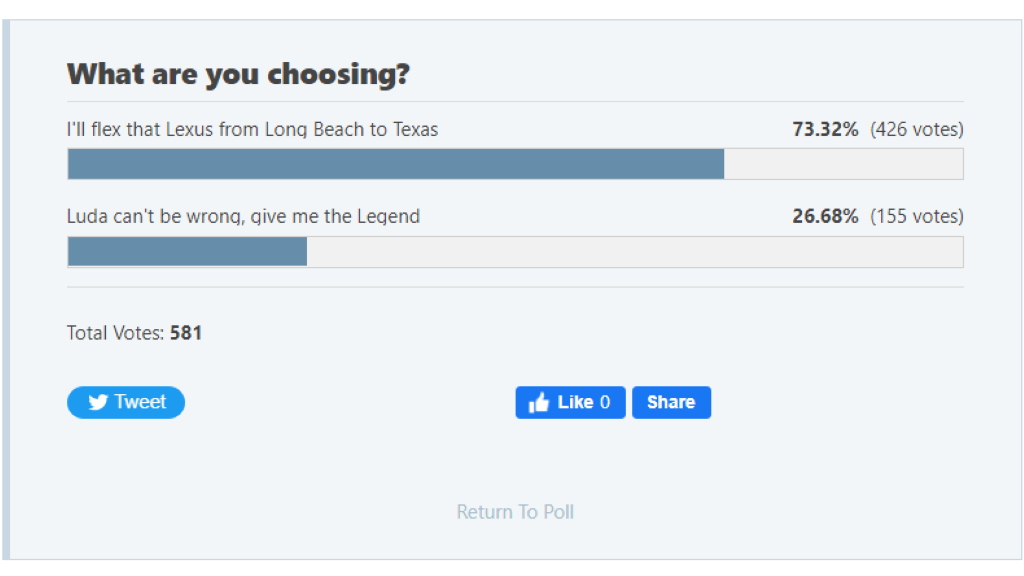 Well, the Camry is a used car yardstick and since the ES300 is fundamentally a fancy Camry, it shouldn’t be surprising to see it take the win over the Legend.

Anyway, back to today’s focus: Cars that are known for expensive and sometimes spectacular problems along with an incredible amount of driving fun. Let’s see how far you want to ride the roller coaster of risk. 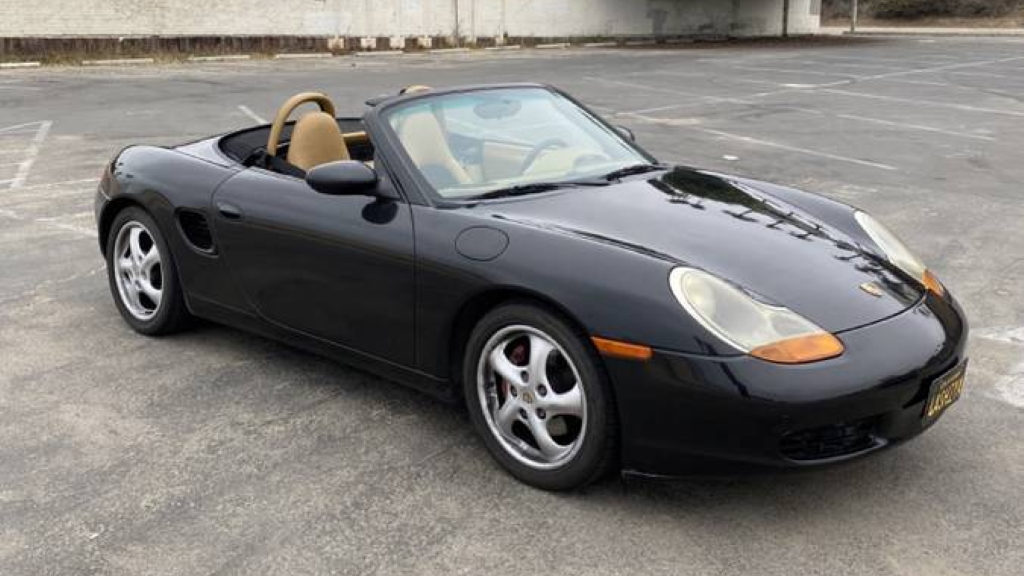 With good 944s costing more and more these days, the first-generation 986 Boxster is starting to make more and more sense as a reasonably-priced sports car. It’s hard to find a fairly modern, budget-oriented mid-engined sports car that isn’t a Boxster or third-generation Toyota MR2, and that MR2 has virtually zero storage space. Coincidentally, both of those cars have a reputation for engine failure, albeit with very different causes. 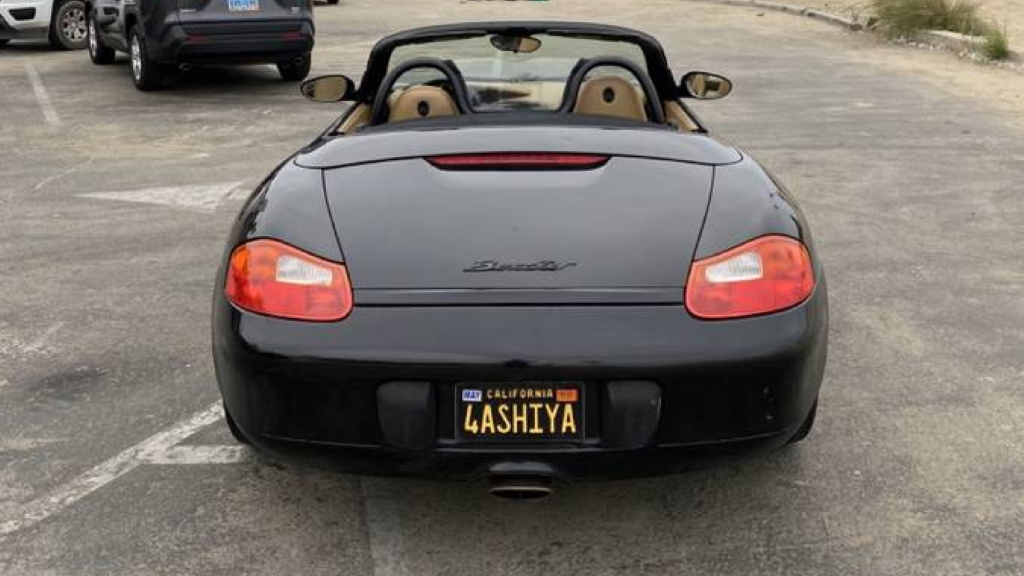 Under the hood, this 986 Boxster seems to be exactly the sort of example you really want. Not only has the dreaded IMS bearing allegedly been replaced with an upgraded LN Engineering part roughly 10,000 miles ago, with the clutch and flywheel having been done at the same time.

Otherwise, oil changes have been frequent and the car doesn’t appear to be messed with. Sure, a 217-horsepower 2.7-liter flat-six isn’t the most potent engine in the world, but it’ll still whisk you along to 60 mph in a tad more than six seconds while making beautiful music. 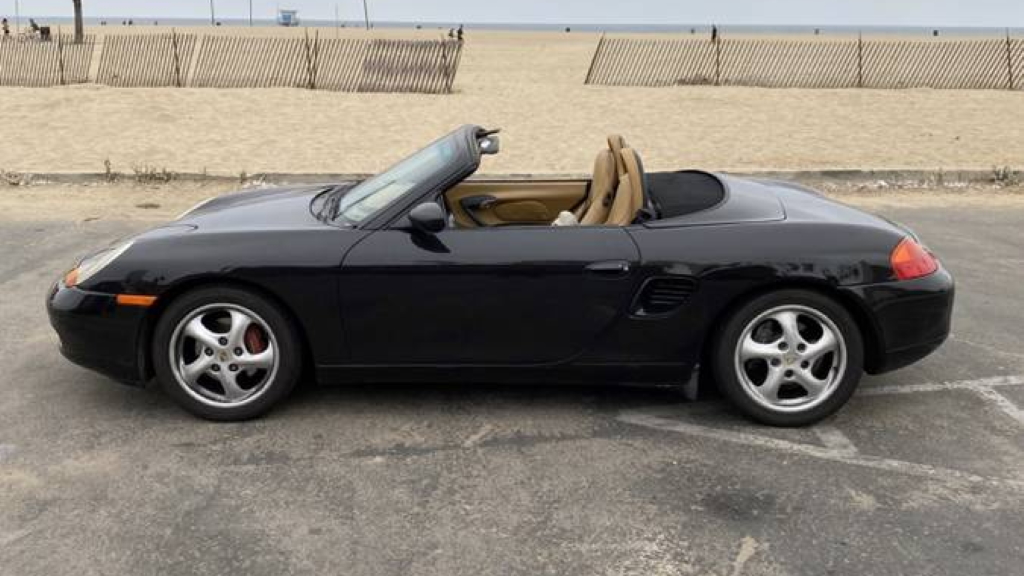 On the outside, this sports car looks quite well-kept and also stock. Popular modifications such as a fried egg delete using later headlights and European side markers are absent, but the black paint looks to be in great shape, as does the cabriolet roof. Kudos to whoever kept this thing looking fresh. 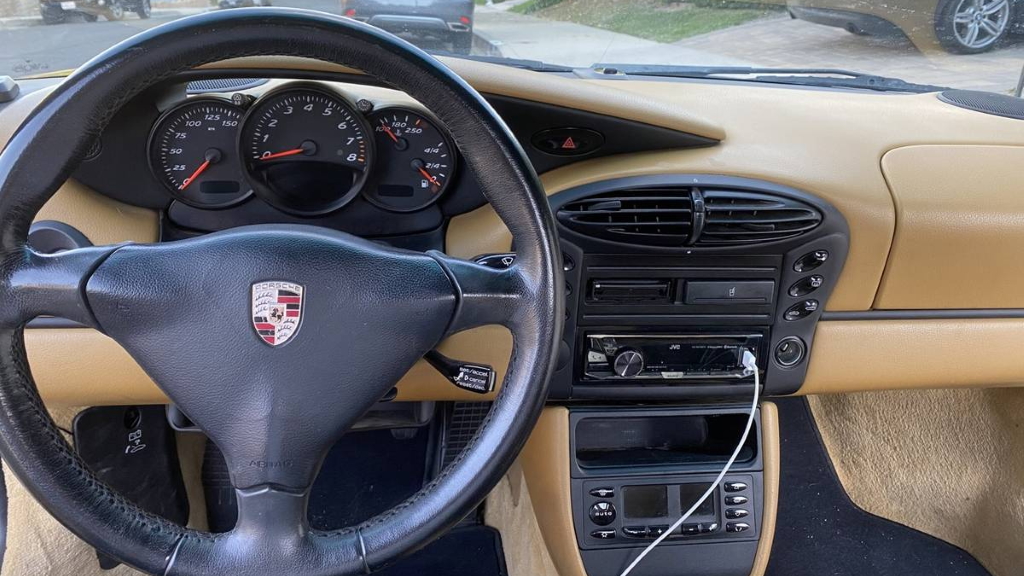 However, this Boxster’s party piece might just be on the inside. It features the relatively rare full leather option which offers a marked improvement in materials over a base car.

Not only that, but the leather in question is an airy tan color and in pristine shape. In fact, the rest of the interior also looks to be in fairly good shape, with just an aftermarket radio and a broken cup holder affecting the otherwise showroom-ready vibe. 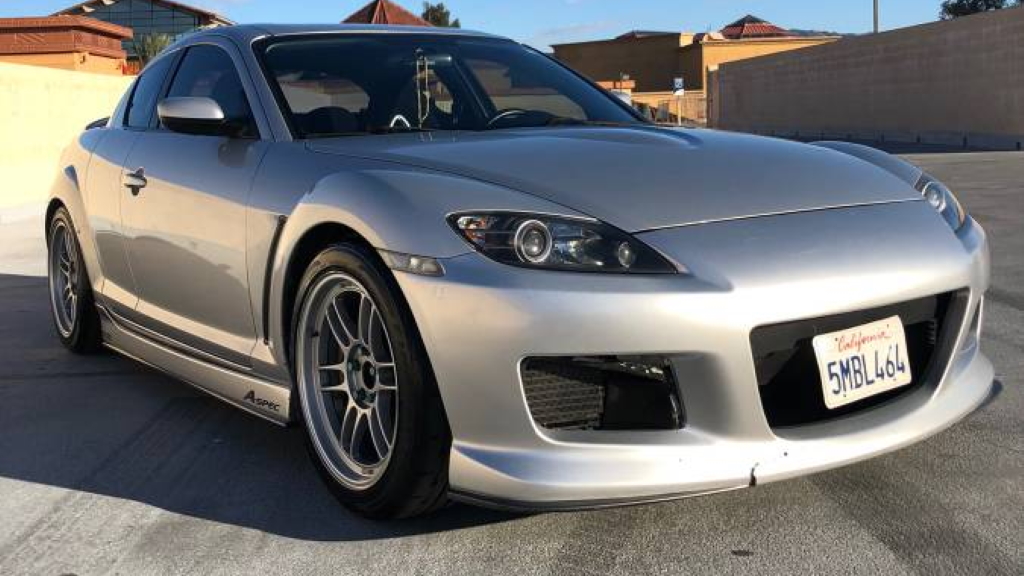 The Mazda RX-8 is one of those rare overlooked last-ever cars. It’s the last production car to drive the wheels using a rotary engine, the last four-seat coupe Mazda ever made, and the last sports coupe with rear suicide doors. It’s fantastic to drive, cheap, and comes with a smattering of apex seal jokes.

See, each rotor in the rotary engine uses apex seals to maintain compression and they wear out over time, eventually resulting in rebuild costs. Still, rotary engines are fantastic fun—when they’re working. 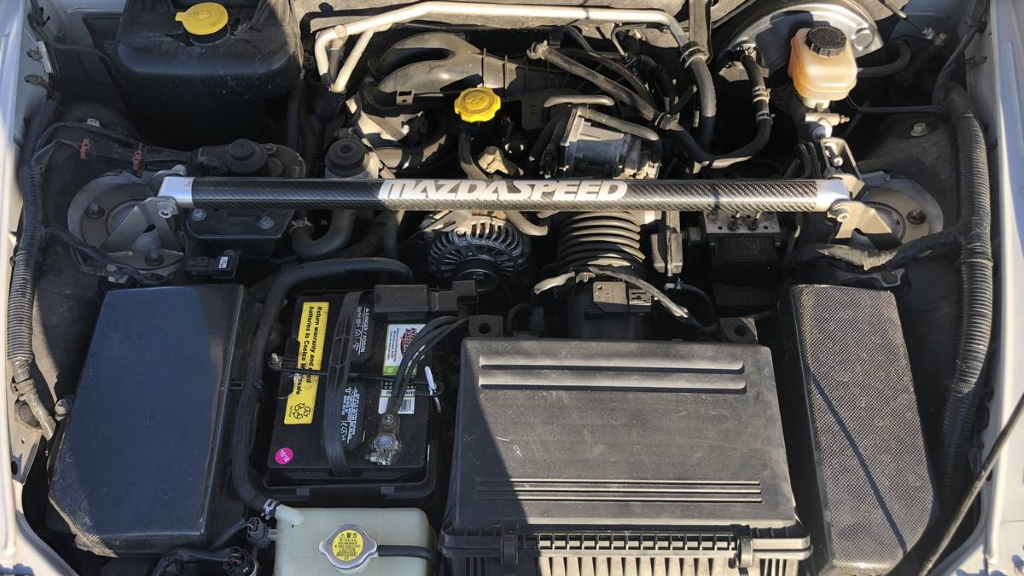 Under the hood of this RX-8 sits an early six-port RENESIS rotary engine cranking out 238 horsepower and 159 lb.-ft. of torque. Not huge numbers, but a sky-high redline makes working for the power feel so special. Add in a precise six-speed manual shifter and rear-wheel-drive, and you get a dose of driving nirvana. Mazda’s last go with a rotary engine was one of the best-handling cars of its day, and could probably tango with a lot of modern stuff in the corners and still hold its own.

The seller of this RX-8 claims to have receipts dating back to new, a huge plus for a car like this. You know what they say, buy it nice or buy it twice. 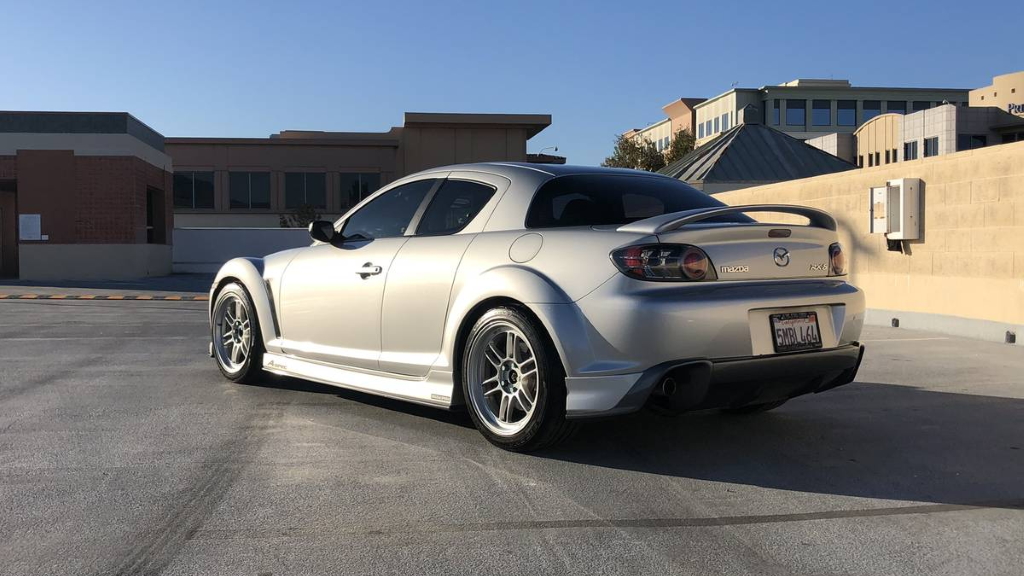 Upon first glance, it’s easy to tell that someone spent a lot of cash upgrading this RX-8 with Mazdaspeed bits. The fairly rare dealer-installed Mazdaspeed body kit has some damage to the front bumper but seems otherwise in good shape, while JDM-style clear side markers help clean up the look. Aftermarket Enkei RPF1 wheels are light and strong, while Tein coilovers help complete the stance. Proper Japanese speed bits for a proper Japanese performance car. 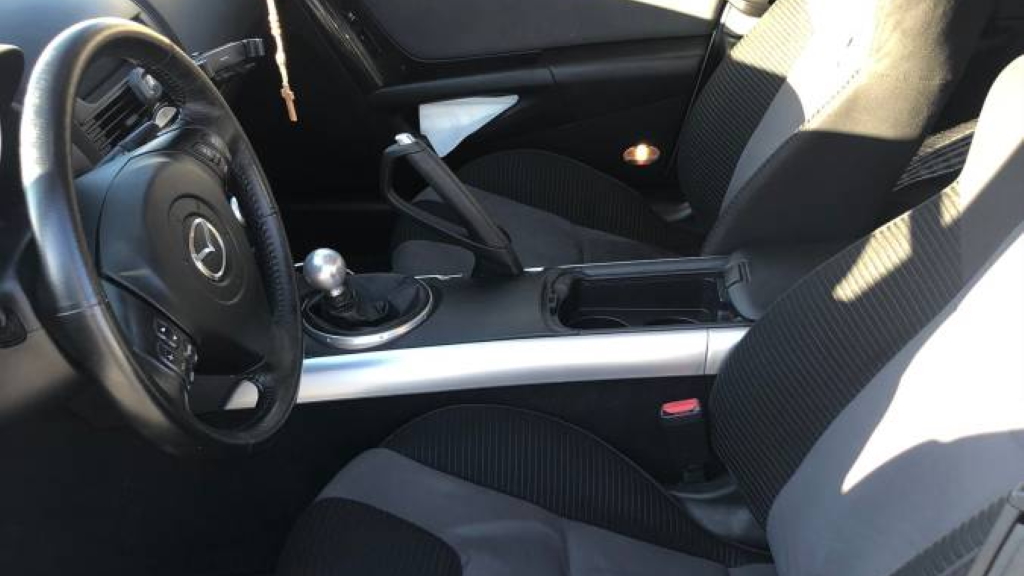 On the inside, this RX-8 is business as unusual with triangle motifs aplomb and reasonably-sized rear buckets for such a small, low-slung car. The upholstery looks to be in decent shape, with the cloth playing nice with the southern Californian sun. Overall, the cabin of this RX-8 looks to be a fairly good place to spend some miles.

So there we are: Two very fun sports cars with fearsome reputations. One has a piston engine known for failure, one has the often-dreaded rotary. While both seem to have been well-kept, it’s up to the next owner to continue taking proper care of these things. Which one would you rather maintain?

Here’s How Mazda Packed An Entire Car, Turn Signals And All, Into A Suitcase

Thomas is a Nu Rave-blaring, heel-toe downshifting, maple syrup-swilling, chassis-geeking, junkyard parts-hauling, floppy-haired scenester who's been writing about cars since college. His current ride is a 2006 BMW 325i with the six-speed manual gearbox. Instagram: @thomas.hundal Twitter: @thomashundal
Read All My Posts »
PrevPreviousThis Should Have Been The Ford Escape: Cold Start
NextChinese Car Companies Had A Huge Year In Europe And They’re Just Getting StartedNext