Smart’s newest car, the #1 small SUV with up to 422 horsepower, is finally getting out into reviewer hands. As I witness the rebirth of Smart from afar, I find myself a bit baffled. Smart has finally achieved what it planned to do for the American market. The new Smart #1 is an affordable electric SUV with a stupid amount of power for a pretty reasonable price. By all accounts it seems to be perfect for America, yet Smart seems afraid to give us another shot.

If you haven’t noticed by now, I can probably safely call myself one of Smart’s biggest fans. I fell in love with the brand at 14-years-old and a 2012 Fortwo was my second car ever and my first new car. I still have that car today, and it’s been as reliable to me as a best friend. Nowadays, I may be 19 or 20 (or is it 21?) cars, motorcycles, and buses deep, but my Smarts are still a highlight of my collection.

I mean, a full 25 percent of my fleet are Smarts and I named myself after Smart’s parent company. And I’m not done, as I want to add a Roadster, Crossblade, Forfour and more to my collection. I have this silly dream of convincing Mercedes-Benz to sell me a Crosstown concept or one of the ultra-rare Formore SUVs.

Sadly, America didn’t have enough enthusiastic people buying Smarts. After just a single good year of sales in 2008, Smart struggled until Mercedes-Benz finally pulled the plug in 2019. There are fewer than 100,000 Smarts on American roads, and it appears that the brand won’t be coming back anytime soon.

As much as it pains me to say so, I don’t blame Americans for not piling into Smart showrooms. The only Smart America got, the Fortwo, was a cool concept wrapped in an undesirable package. The dent-resistant plastic panels didn’t just make parking lot dings a thing of the past, but their design allowed owners to change their car’s color in as little as three hours. The full panoramic roof was ahead of its time, and it even sported a rear-engine, rear-wheel-drive configuration. Even the contrasting colors between the panels and the safety cell are a design element that works so well. 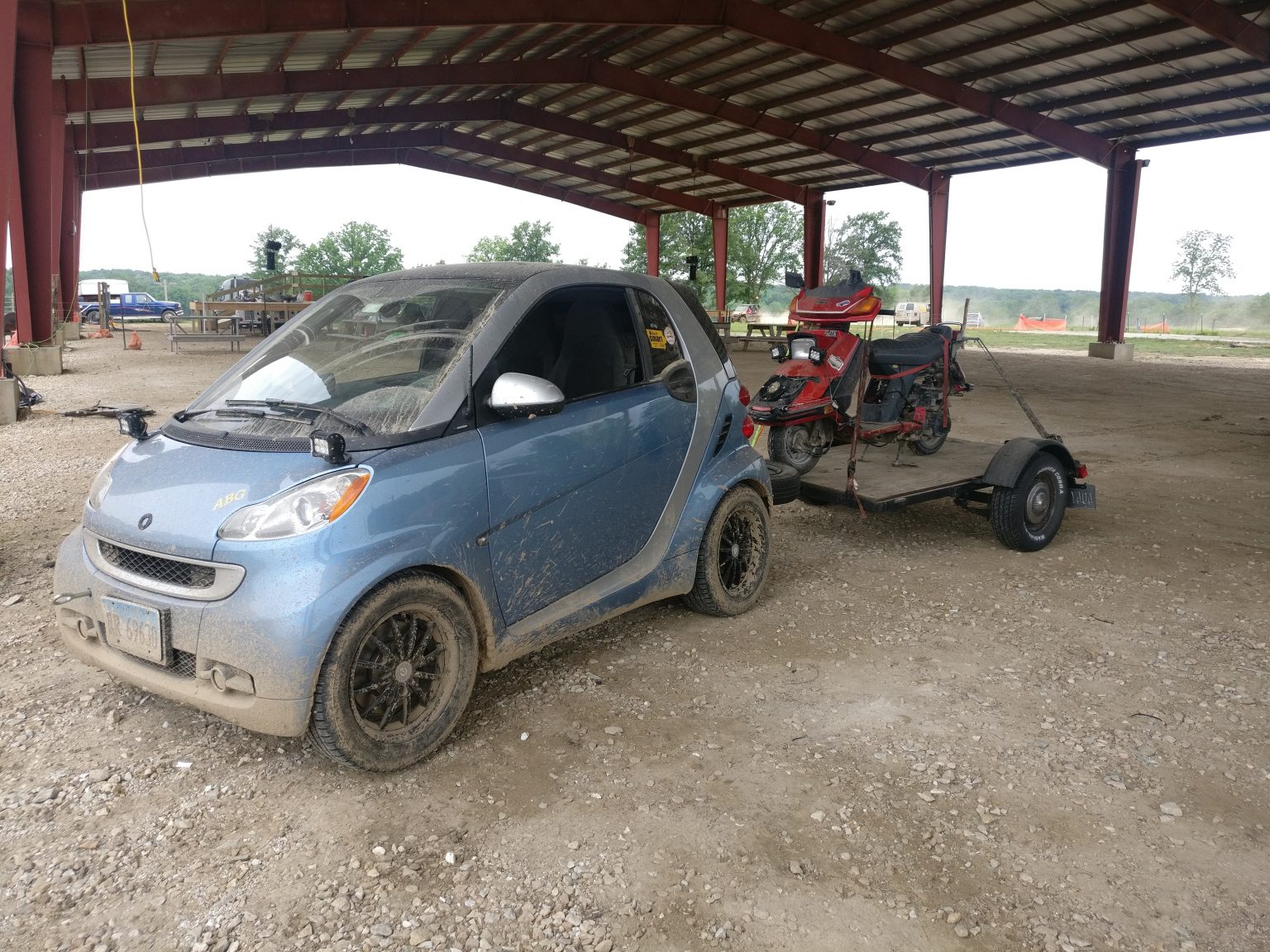 Unfortunately, these tricks were packaged into a car that Americans found unappealing. While the SUV and pickup truck reigned on the road, Smart USA wanted Americans to buy a two seat city car. That alone would have made for a battle for sales, but that city car came with a controversial transmission and an engine that wasn’t that economical. The wild part is that Smart did have an incredibly economical diesel engine (mine gets 70 mpg), but Smart USA felt that this engine didn’t have enough ponies for Americans.

In 2014, Smart unveiled the third-generation of the Fortwo. The new car was promising; it ditched the slow transmission and was based on a platform shared with the Renault Twingo III. This meant that Smarts got faster, smoother, more comfortable, and in Europe, an option for four doors with the Forfour. Tepid sales data suggests that the new cars were perhaps not enough. In 2019, Mercedes-Benz sold a 50 percent stake in Smart to Geely to help reboot Smart. 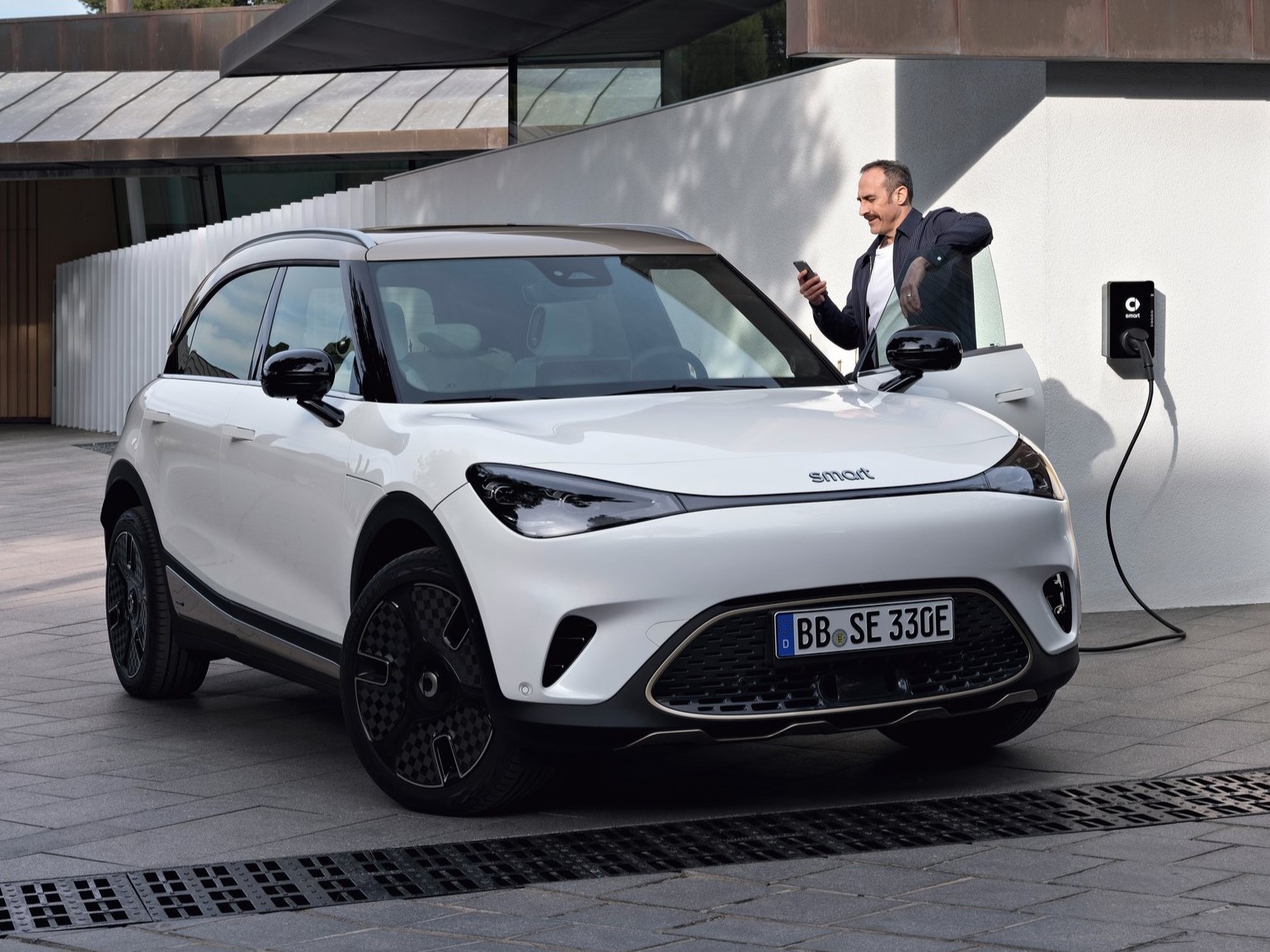 It was confirmed early on that the first new vehicle of the relaunched Smart would be an SUV. That wasn’t surprising at all to me. Back in 2006, Smart recognized that building an SUV was going to be a way to be successful in certain markets. Remember how I said that I want a Formore? The Formore was supposed to be the launch vehicle for Smart’s United States effort. The company went through all of the work developing the thing, only to run out of money right before turning the lights on at the factory.

Now, 16 years later, with the help of Geely, Smart finally put some SUVs on the road. The Smart #1 is an SUV for the Twitter generation. No, really. The name is “hashtag 1” and the name is supposed to make you think about what’s trendy on social media. 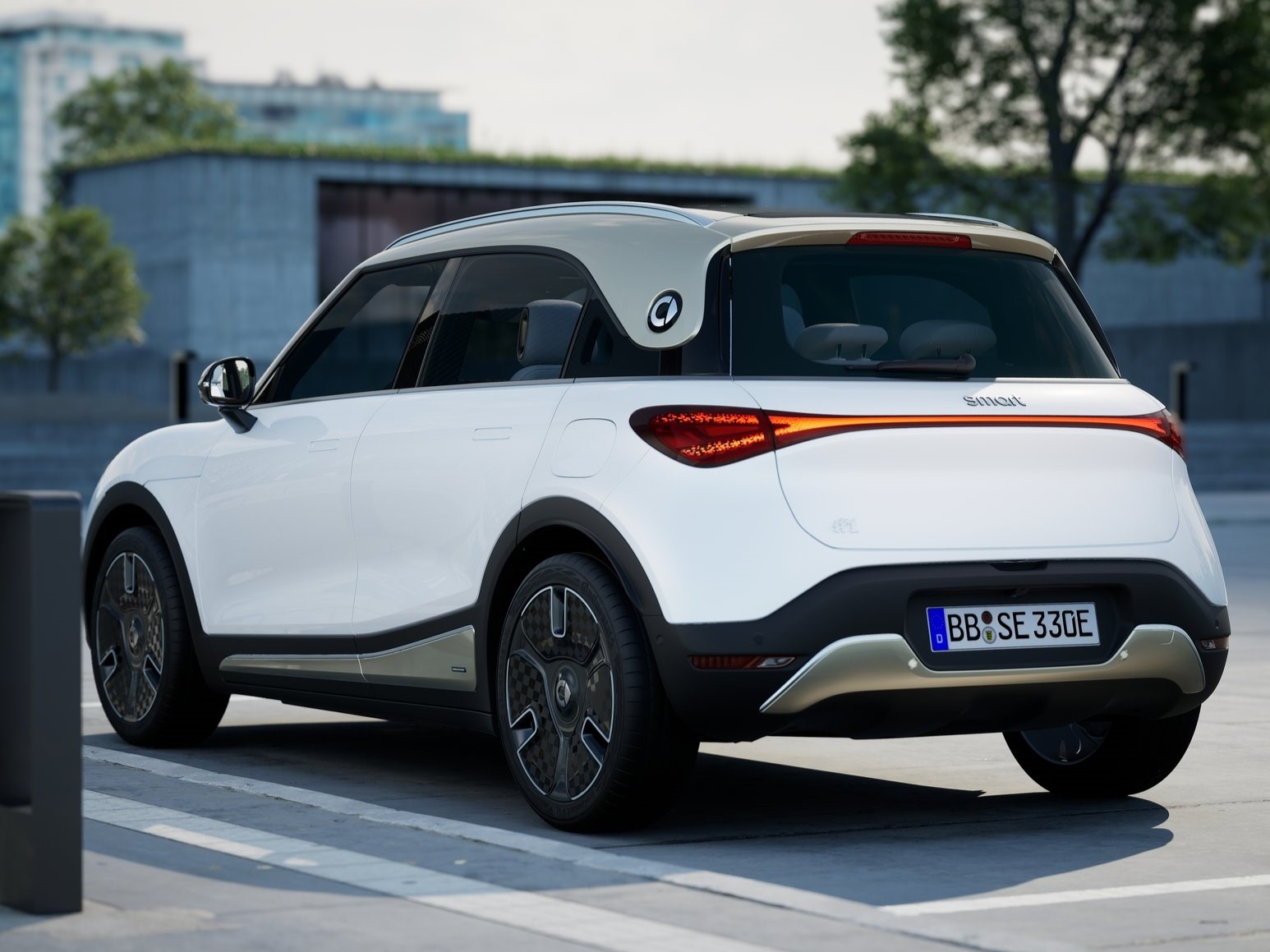 If you can get past that, the SUV seems pretty darn neat. The Smart #1 is built on Geely’s Sustainable Experience Architecture (SEA) modular electric vehicle platform. And at current exchange rates, Europeans can pay $32,500 to get a 14 feet-long electric SUV that seats five, puts down 268 horses to the rear wheels and delivers a zero to 60 mph time in 6.6 seconds. And thanks to the 66 kWh lithium-nickel-cobalt-manganese battery, it has a WLTP range of 273 miles.

That makes the Smart pretty competitive. For example, a Volkswagen ID.4 Pro has an EPA range of 280 miles, or 324 miles on the WLTP cycle. What you lose in range you gain in power, as the Smart is two seconds faster to 60 mph with 67 more horses.

And if you’re feeling really frisky, Smart offers an even faster version of the #1. For an additional equivalent of about $10,000, the Smart #1 Brabus offers an incredible 422 horsepower through the addition of a 154-hp front motor. This results in a 0-60 time of 3.8 seconds and as Car and Driver reports, it’s enough power to spin all four wheels on launch. 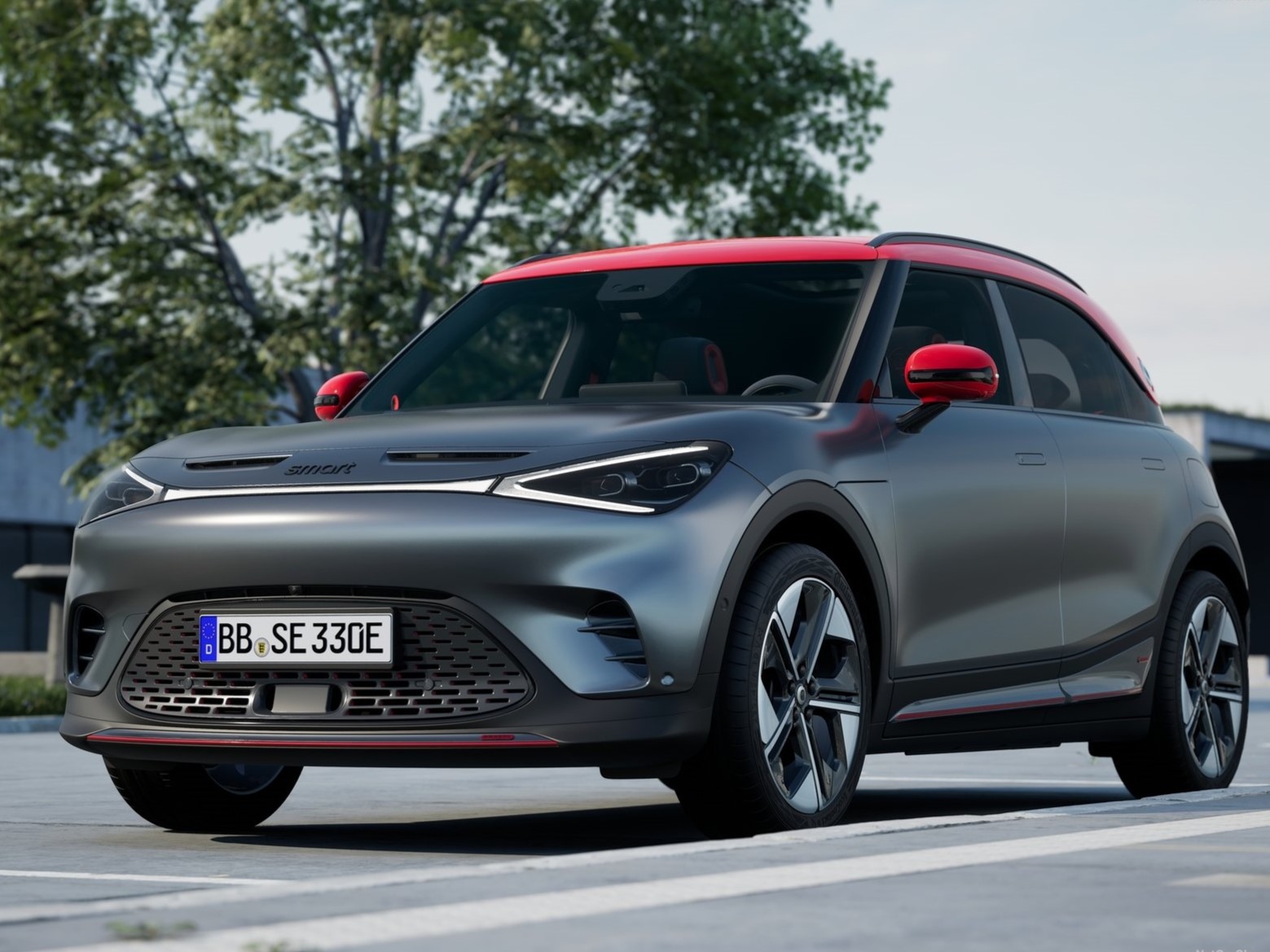 Even if you count the raucous Smart Roadster Brabus V6 Biturbo (which wasn’t a production car) it’s the fastest Smart ever built. The #1 Brabus can blow past 60 mph before my diesel Fortwo can hit 20 mph. Both the base #1 and the Brabus top out at 112 mph, which is pretty nutty for a car with a Smart badge. Opting for the Brabus does mean a lower 248-mile range, but with that kind of performance that could be forgiven.

Even crazier is the handling, which Car and Driver said was “like a naughty puppy, it really sulks in corners, where the traction-control has to battle to keep any level of discipline; we frequently encountered both understeer and oversteer in the same bend.” All of this is incredibly fascinating and pretty silly, but in a good way. It makes me wish I had a passport just so I can drive one. Maybe I could convince Mercedes-Benz to let me take one on a ‘Ring lap? 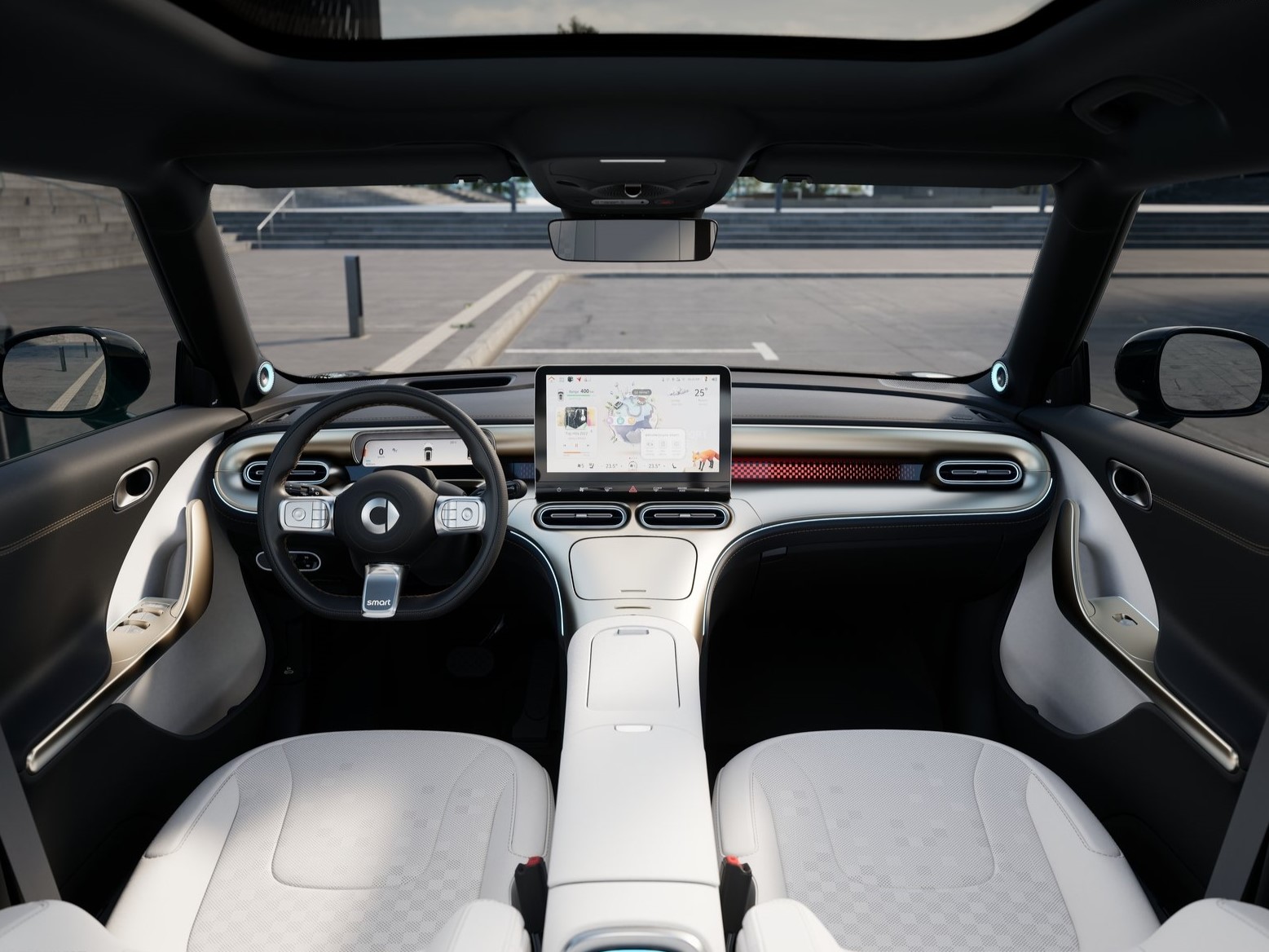 Reading and watching reviews of the #1, it sounds like Mercedes-Benz and Geely also made it a pleasant car to be in, too. The suspension is said to be soft, and the fit and finish inside are apparently good, too. I like how the HVAC vents have a neat ambient LED glow. There’s nice tech, too, from a head-up display, a heat pump for extreme weather operations, a level 2 driver assist system, and even automatic parking. 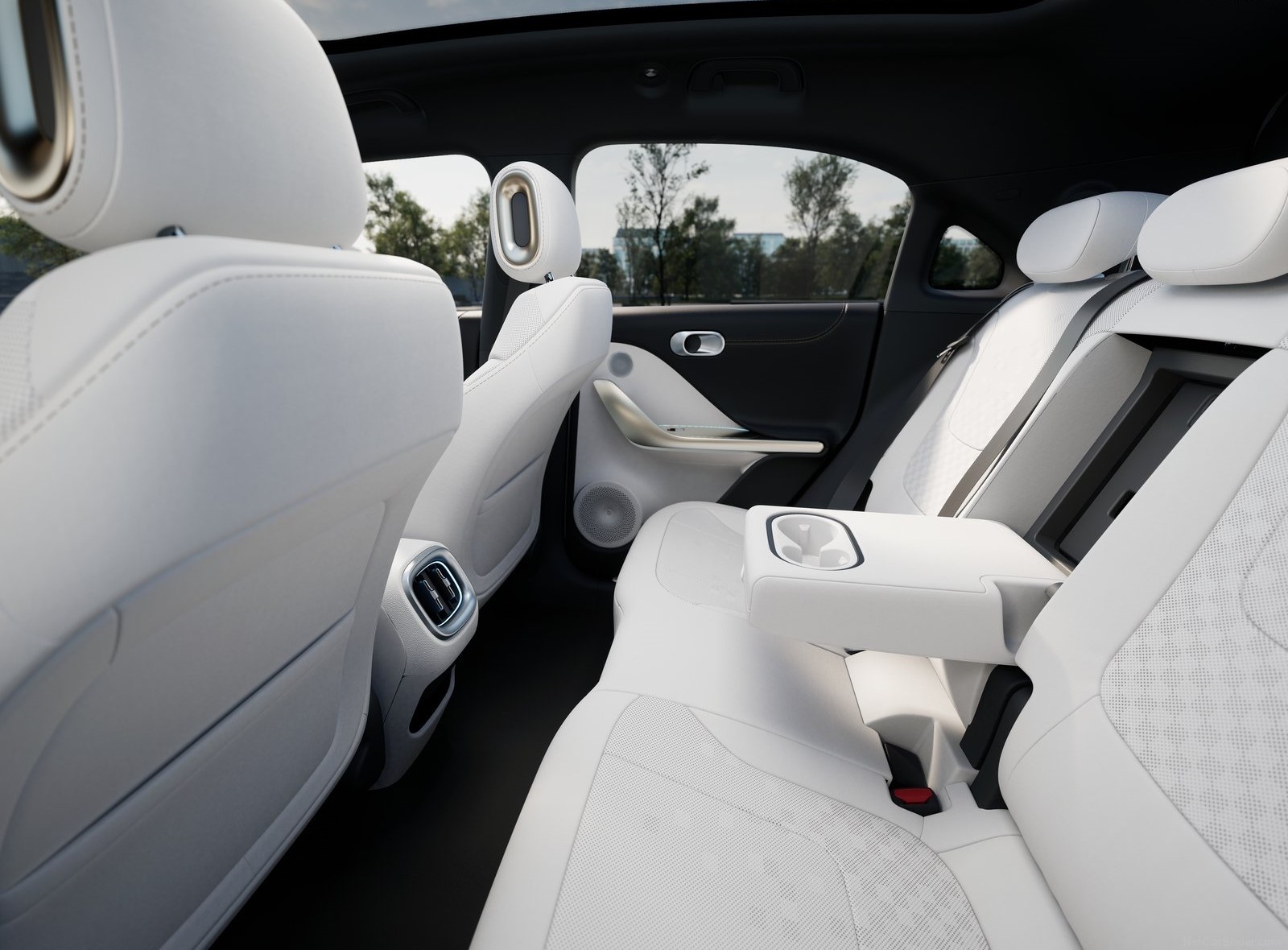 Though, at least in the test cars, apparently the infotainment system is a bit wonky. Car and Driver found misspellings and that the button that appeared to turn on stability-control actually turned it off. A reviewer at Electrifying found the infotainment system, which uses a bunch of widgets and didn’t have Apple CarPlay or Android Auto, to be confusing:

Again, I love all of this. But here’s where I get disappointed. If you removed the badges from this car, it’s not really identifiable as a Smart. Geely and Smart tried to nod at the past by having a contrasting color for the floating roof, but that’s not really distinctive. Other cars have a similar a floating roof design. And it’s sort of the same inside. The LEDs are cool, but nothing new. In the past, Smart interiors utilized weird shapes, fabrics, and bright colors. Here? Not so much.

And this is intentional. Smart has decided to shake off the playful image for a premium look and feel. Weirdly, while this disappoints me, I bet it would be perfect for America. 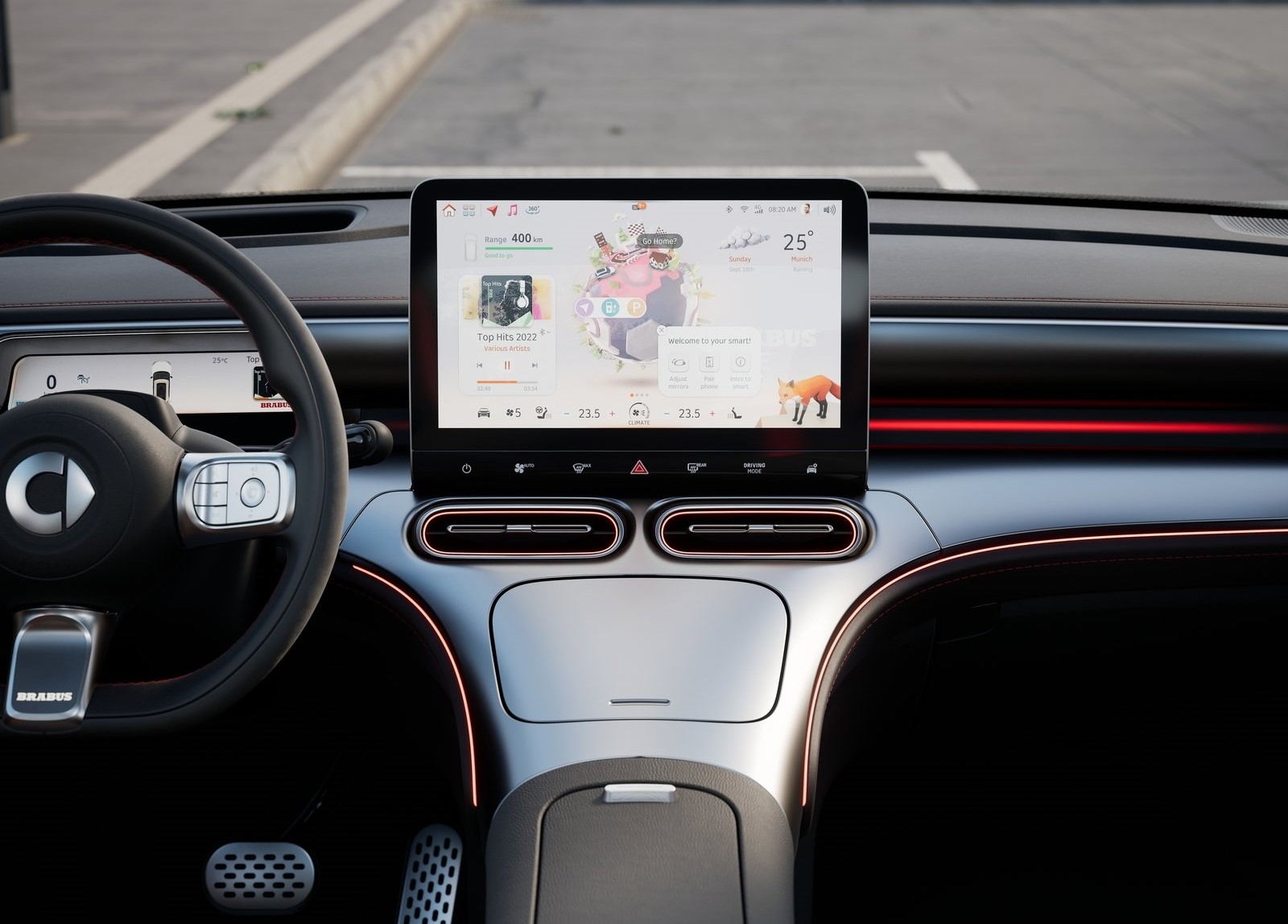 Here is an electric SUV that seems to offer good performance for a decent price. And while a Smart badge would normally mean subjecting yourself to weirdness, the #1 actually seems pretty normal. Small electric SUVs are selling great in America right now, just check out the ID.4’s sales record. It seems to me that Smart is leaving an opportunity on the table.

And it gets even better. Last year, I reported that Smart plans on making more than one SUV. The SUV thought to be the Smart #2 has been spotted testing in China, and it looks like one of those “SUV coupe” things that automakers are making nowadays. Sadly, despite Smart being reborn as an SUV maker, the company currently has no plans for a U.S. return. Instead, it’s just for Europe and China. Personally, I hope someone sees the potential here. These seem like Smarts that Americans would definitely buy.

Mercedes is a lifelong fan of all things powered by an engine. When she isn't driving one of her five Smart Fortwos or her 14 other vehicles she could be found in the cockpit of a Cessna 172 or perhaps swimming in any body of water that she could find. She also has a deep love for buses of all kinds. Please send her buses. mercedes@theautopian.com Instagram: @mistymotors Twitter: @Miss_Mercedes30 Facebook.com/neonspinnazz
Read All My Posts »
PrevPreviousThe First Car To Be Actually Built In Series May Also Have Been The First Car To Be Bootlegged
NextUneasy Is The Dog That Rides The Crown: Cold StartNext