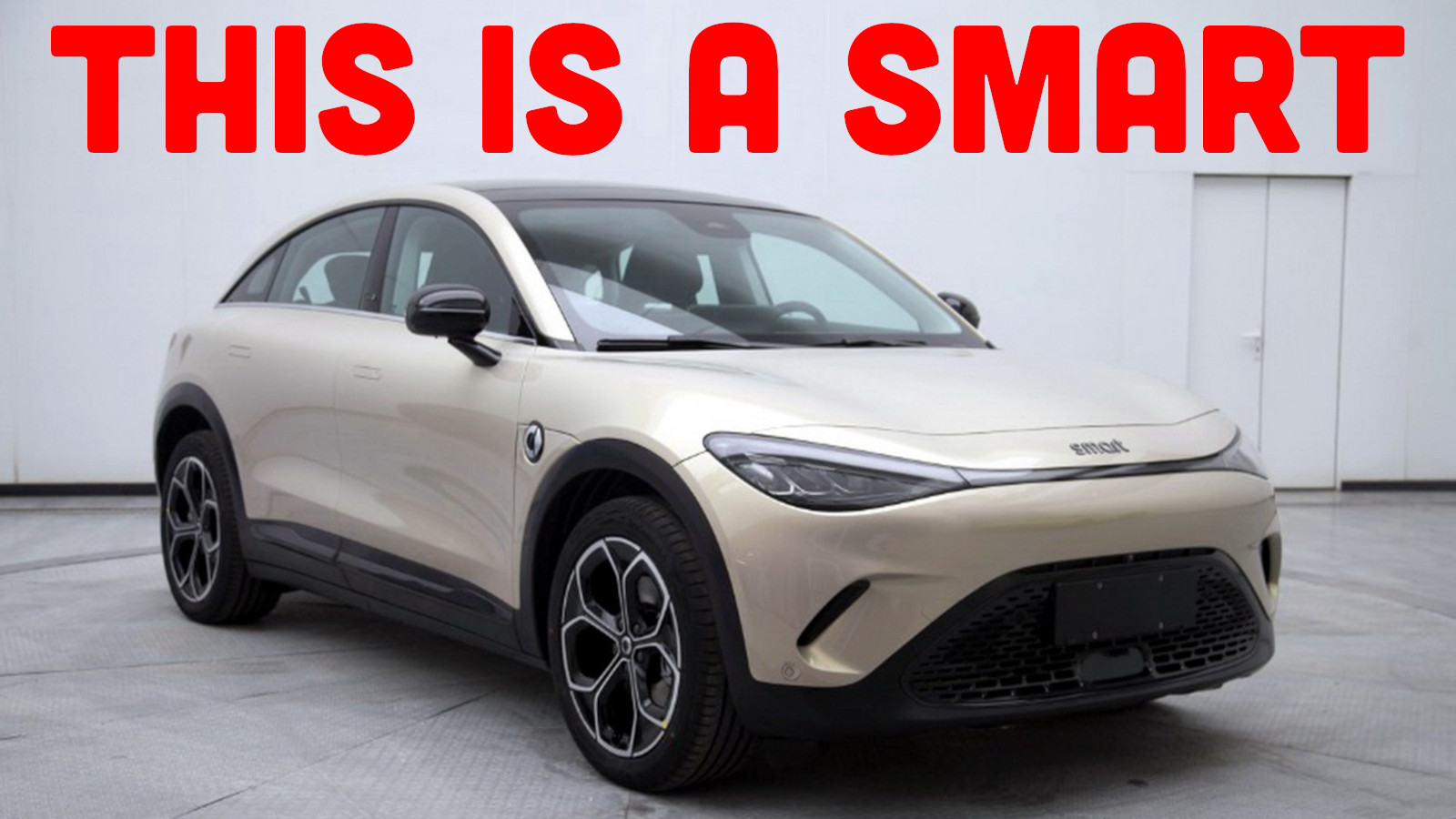 Last weekend, a photo popped up in my news feed with the caption “Smart #3…” under it. Still coughing out my lungs and dosed up to the eyeballs on medicine, I scrolled past the image and watched a video about Chicago’s commuter rail network. Then it hit me, that was a Smart! I love Smarts! So I went straight to Google where I coughed before dropping my jaw; Smart has another electric SUV on the way and it looks great. The #3 is longer, lower, and wider than the similarly-looking hot rod #1, but is — like “Hashtag 1” — completely unrecognizable as a Smart.

Smart left America in 2019, but I continue to follow the brand’s story. My love for Smart is over 14 years strong, and I’m always looking for new upgrades and Smarts to pick up. I mean, I have five Fortwos spanning five different years, three generations, and two types of engines. I still have to get a couple of Forfours, a Roadster, a Crossblade, an Electric Drive, and a Fortwo cabriolet. Speaking of which, if you happen to know of a Roadster for sale in U.S. borders, I’d love to know! At any rate, I love Smart so much that I’m even willing to buy the company’s new SUVs when they come of age roughly 25 years from now. [Ed note: Now that’s dedication! -DT].

But Smart’s new design language baffles me. In 2019, Mercedes-Benz decided to sell 50 percent of Smart to Geely. The plan? Relaunch Smart as an all-electric SUV brand with vehicles designed by Mercedes-Benz and built in China using Geely technology. The rebirth of my beloved Smart put me on a rollercoaster of emotions.

On one hand, I’m chuffed that Smart finally succeeded in making the SUV that it wanted to make since 2006. And it blows my mind that the Smart #1 Brabus (above) punches out 422 horsepower. That’s not just the fastest Smart ever put into production, but it’s nearly three times as powerful as the previous fastest production Smart. The Brabus is so powerful that it races to 60 mph in 3.8 seconds, and it’ll spin all four tires if you let it. And this is in a Smart!

Geely has turned Smart into something that regular people would buy, and not just weirdos like me with five Fortwos. But I fear that Smart is losing its identity along the way. The #1, with its Mini Countryman-style roof, already departed far enough from the Smart formula. Now we know what Smart’s next car, the #3, looks like (below), and it looks even less like a Smart than the #1.

Peel off the Smart badges and the new SUVs could belong to any brand. That’s weird, since Smart has long enjoyed such a distinctive design language that you didn’t even need to see “Smart” to identify a Smart. But this is all a part of Smart’s rebranding as a premium, more serious automaker. And as a reminder, Smart says that those “#” signs mean “hashtag,” so this car is the “Hashtag 3.”

The pictures of this car come courtesy of China’s Ministry of Industry and Information Technology (MIIT), a government entity responsible for administrating Chinese industries and information security. MIIT publishes the Road Motor Vehicle Manufacturers and Products Announcement, which catalogs vehicles that will be available soon in China, which is pretty neat!

If you want to know how Smart got to this point, I wrote about that and you can read it by clicking here. But I’ll still give you the short version. Back in 2014, Smart unveiled the third generation of the Fortwo and the rebirth of the long-discontinued Forfour, below:

These cars–which shared a platform with the Renault Twingo III–were supposed to right a lot of the wrongs of the cars of Smart’s past. Smart ditched the slow single-clutch automated-manual transmission for a legitimately quick dual-clutch unit and an optional five-speed manual. Speed picked up, too, with a new, more powerful base engine.

Extra care was taken for America, where the second-generation Fortwo had suffered from poor sales and a bad image. The new Fortwo lost its signature single-box design for a muscular two-box design. Check out this picture. The first-generation Fortwo is on the left, second in the middle, and the third on the right:

At the time, a representative at Smart USA told me that the new design was supposed to make the car look bigger than it actually was. And this was done for us. Unfortunately, it didn’t work, and U.S. sales stayed slow. And in one of Smart’s key markets, Europe, the cars didn’t quite capture the magic that the earlier ones did. But that’s the past. Smart is gearing up for a total rebirth, one that will hopefully turn things around.

The new Smart #3 appears to be the vehicle that has been seen in spy shots and was speculated to be named the #2. It’s a crossover design featuring a front and rear design similar to the smaller #1 and Mercedes’ current design language. What’s changed is the middle. Unlike the #1, which is more upright, the #3 takes on a more “crossover coupe” design that a number of models have today. The side profile tapers off almost like the teardrop-shaped Mercedes-Benz EQS. The MIIT pictures show a couple of different color variations and angles of the #3, here’s the rear:

According to Car News China, which found the filing, it’s 14.4-feet-long, 6-feet-wide, and 5.1-feet-tall. That makes the #3 about five inches longer, 0.8 inches wider, and 3 inches shorter than the #1. And the wheelbase is just 1.4 inches longer. Like the #1, the #3 rides on Geely’s Sustainable Experience Architecture (SEA) modular electric vehicle platform. This platform underpins cars that you may have heard of like the Lotus Eletre, Polestar 3, and Volvo EX90, as well as cars you may not have heard of like Zeeker’s 001 and 002.

While the filing doesn’t reveal battery capacity or range, I wouldn’t be surprised if it also shares the #1’s 66 kWh lithium-nickel-cobalt-manganese battery and WLTP cycle range of around 273 miles. The filing does reveal a couple of more neat details, like a curb weight up to 4,166 pounds and a tow rating of 3,527 pounds.

All of this is great! And when Smart finally starts delivering its new SUVs to customers I have no doubt that sales will be a smash hit. But I’m afraid that Smart has lost itself. Though, at least the interior of the #1 hasn’t gone completely normal:

Back at the old lighting site, I wrote about Smart’s new plan to get more serious and shake off some of the fun image. Sadly, what I feared has for the most part happened. Smart put on a business suit and now holds a real job.

There was a time when you could tell a Smart from another car without looking at the badge. But these don’t look distinctive. Remove the badging and they could be mistaken for any random SUV. Sure, it looks like you could get a #3 with a contrasting roof color, but that’s not really “Smart.” Again, these look great, but they don’t look like the Smarts that hundreds of thousands of people around the world have fallen in love with.

Thankfully, I do have some good news. David Browne, CEO of Smart UK, has confirmed that the Smart Fortwo will be getting a replacement. As of right now, the Smart EQ Fortwo is built by Ineos in Smart’s old Smartville factory in France. That’s expected to continue until sometime in 2023 or 2024. As reported by the UK’s PA Media: Motoring news service, when the Fortwo gets discontinued is up to Mercedes-Benz. Whenever the brand gets around to replacing the Fortwo, the new vehicle will likely be built in China where the electric SUV production is.

There are exactly zero details about what the new Fortwo will look like or what it’ll be like underneath. But I–perhaps foolishly–have some hope that at least the Fortwo will keep with tradition with its design. Time will tell.

In the end, I’m hopefully that these new Smarts will finally bring the brand the prosperity it so desperately needs. But it’s disappoitning that Smart has no plans on giving America another try. And perhaps in Smart’s chase for profitability, it lost itself along the way.

I love this brand so much that I so want to drive one of these SUVs; maybe, 25 years from now I’ll be importing one.

Mercedes is a lifelong fan of all things powered by an engine. When she isn't driving one of her five Smart Fortwos or her 14 other vehicles she could be found in the cockpit of a Cessna 172 or perhaps swimming in any body of water that she could find. She also has a deep love for buses of all kinds. Please send her buses. mercedes@theautopian.com Instagram: @mistymotors Twitter: @Miss_Mercedes30 Facebook.com/neonspinnazz
Read All My Posts »
PrevPreviousThe Autopian Chooses The Coolest Cars You’ll Finally Be Able To Import To America In 2023
Next‘The Worst Set Of Brakes I Have Seen In My Career’ — A Mobile Mechanic Shares Why He Intentionally Disabled A Customer’s CarNext